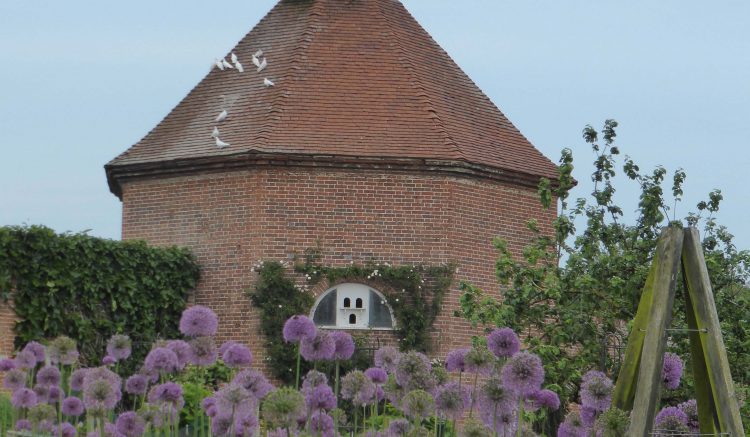 Last evening on our late return to the Unicorn, I flagged up my reluctance for another long walk following three in succession. The last two being non-stop, very scenic, “afternoon strolls” of 13 and 12.5 miles. I suggested that the “boys” and I were over exerting ourselves (this cut little ice with Fred). Freddy has become a metronome of walking at a steady, unrelenting pace, I have no doubt he could easily cover 30 miles a day. My view is mainly of his back some distance ahead with Crosby trotting along beside him, Dexter and I lagging behind supposedly pausing for photo shots.

Overnight I toy with the idea of feigning a limp but decide I will never pull it off, Freddy is too sharp, and I will forget which leg is supposed to be the gammy one.

This morning Freddy takes the boys out for their early morning constitutional leaving me to carefully study the insides of my eyelids. They return shortly and Freddy is concerned as Dexter is limping and doesn’t want to weight bear on his left front paw (I have a very guilty feeling). We find no visible sign of damage and there is no flinching as we closely examine Dexter’s paw and leg. We decide he needs a restful day, therefore, Freddy and Crosby will go exploring leaving Dexter and I at base camp.

They drive off. Was that a triumphal punching of the air from Dexter or was he just holding up his paw? Dexter carefully and deliberately chooses where he will stretch out in the sun, normally Crosby is much quicker at claiming the prime spot. Is that a secret smirk I see playing across his muzzle? Similar to that of a child who has swung a day off school for a sniffle when it was double maths followed by an arctic conditions game of hockey (not that I knew how to do that!).

Dexter has soon fallen into a very deep, peaceful sleep. Unfortunately I have things to do. There appears to be as much tidying and cleaning in a caravan as in a house, the mess is just more concentrated. I feel like mole in the opening of Wind in the Willows, spring cleaning when I would prefer to be having a picnic outside. Worse is to come, I am still playing catch up with the laundry after last weeks wet weather.

I know how poor Toad, from said book, felt when disguised as a washerwoman up to his elbows in hot suds. Some poetic licence here, you are not up to your elbows if having to fetch and carry the water! However, hand washing and particularly hand wringing are hard work, I will have rippling biceps by the time I return to Pitton, they will match my honed calves from walking, it is the bit in between I am worried about.

Dexter follows the sun and moves lazily to recline in a new area from where he eyes the fridge thoughtfully, after this initial victory I think he is planning an offensive on his Master’s pork chop. With that the wanderers return, hot and bedraggled for a late lunch. Freddy is taking the afternoon sickbay shift, I am excused duties.

If my memory serves me well Toad escaped along the canal towpath, instead I scamper along the drive of Felbrigg Hall with a metaphoric clip of the heels and Poop Poop! or was it Toot Toot?

We passed the Hall a few days ago, it was built in 1620 and significantly remodelled in 1750 to house the pictures that William Windham II brought back from his Grand Tour. The house is unusual in that its contents are all original rather than brought in to pad it out. I love old houses but I am usually more taken by quirky things and ephemera than family portraits, battle seascapes and marbles. I am interested in life below stairs (I know my place) especially thinking of my father who was put into service in a large residence in Kensington, aged 13.

One family portrait that catches my eye is of a child William Frederick ‘Mad’ Windham (1860-1866). He had a thing for dressing in uniform and whilst posing as a train guard his unauthorised whistle blasts caused chaos. He also had a penchant for rounding up dubious women in London after closing hours whilst masquerading as a policeman. His attraction to dubious women proved the family’s downfall, as he married a fortune hunting lady of easy virtue. His Uncle tried to save the family name and wealth by having him declared a lunatic, he failed. The fortune was lost and the wife ran off with an Italian opera singer – such is life.

The Hall then came into the ownership of the Ketton family (1863). The dining room is lovely, set for an 1860’s dinner party the menu taken from a hand written one of the time. The kitchens and service wing are really interesting and include a small fire engine and fire buckets from the 1860’s, a previous owner had a love of making fireworks and had caused an explosion in the Service Hall.

The walled garden is beautiful, with some stunning plants. There is an impressive dovecote (circa1750) with 968 holes each with room for two nests. Enormous flocks of pigeons were kept to provide fresh meat year round. Within the walled garden are several allotments used by local residents, they benefit from the wonderful soil, shelter and warmth of the walled garden along with practical gardening advice. They are all immaculate, I am guessing that this is a condition of having one.

In the orchard some fine looking hens are regally ensconced in a hen house with castle facade. I take a picture, our friends Stu and Roger may want to take breaks from their arduous summer of sport to make something similar for their respective gardens.

Freddy arrives to collect me, we take the boys for a turn around the field. Dexter is looking much better, but a precautionary few more restful days are prescribed. Tomorrow should find me dashing away with the smoothing iron, but wily old Dexter has already stolen my heart away! 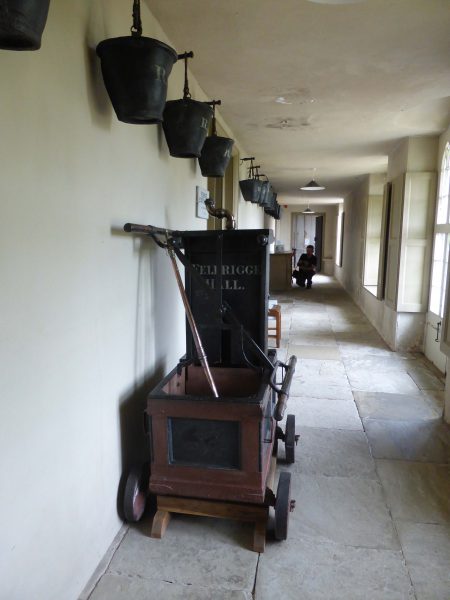 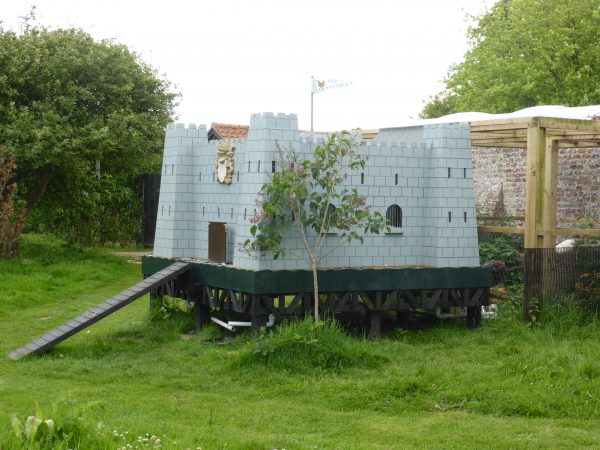 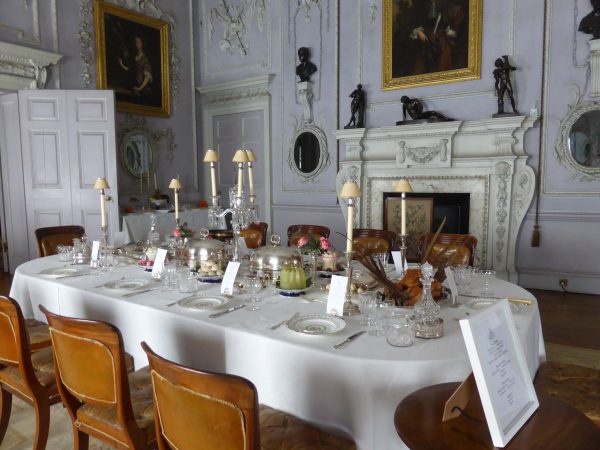 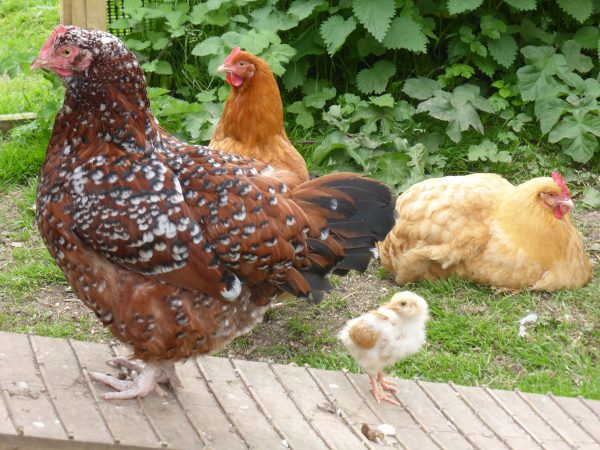