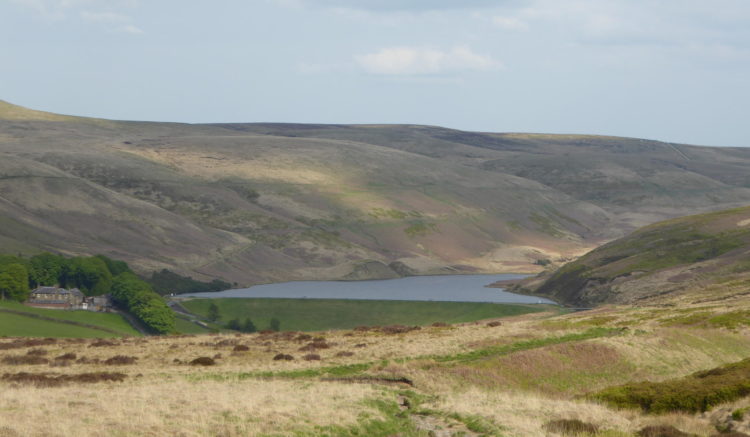 Towards the end of yesterday’s walk we stopped to take in the view down the Wessenden Valley, it looked absolutely stunning.  Today the weather is again set fair so we head back to the car park in the disused quarry above Wessenden Head Reservoir.

Starting our walk we turn left from the car park and then turn right through the gate to walk down the track towards Wessenden Head Reservoir, the highest of the four reservoirs in this valley. 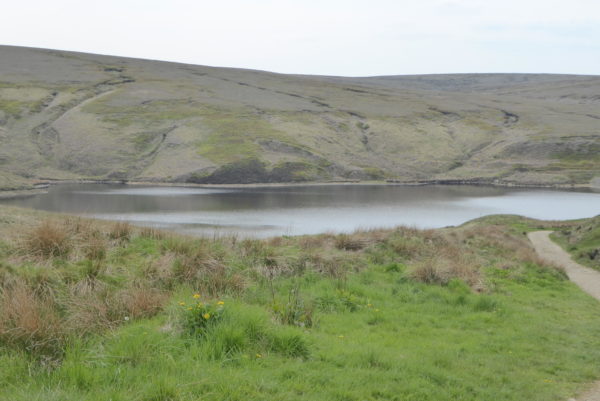 As soon as we pass the dam we can see Wessenden Reservoir below us. 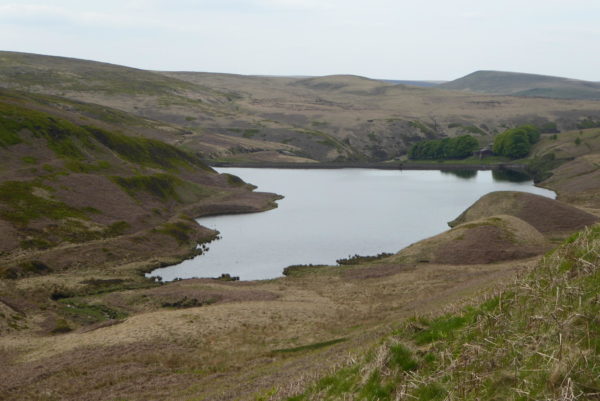 Wessenden Reservoir is the oldest in this valley; it was completed in the 1840’s.  It is a wonderful spot.

On reaching the dam there are a number of paths we can take.  We opt for the Kirklees Way that follows the track leading in front of Wessenden Lodge. Just after the lodge we see the Wessenden Waterfall to our left.  Even after such a long dry spell this is impressive, it must be amazing after a prolonged wet period. 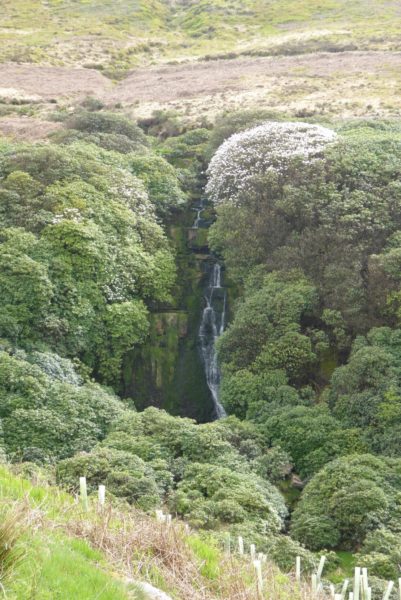 After rounding a corner we catch sight of Blakeley Reservoir.  Work on this reservoir was first approved in 1871, but it was not completed until 1904. 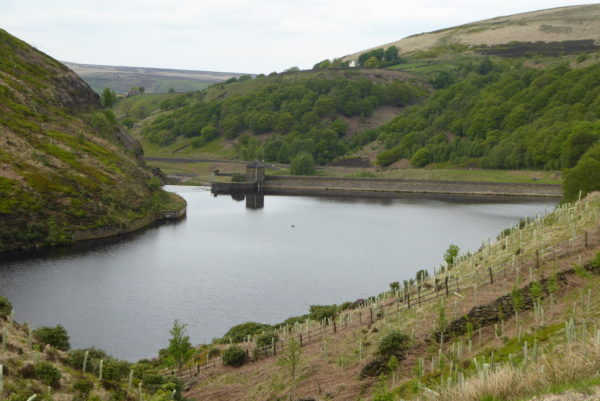 Continuing along the track we soon see Butterley Reservoir.  Work started on the construction of this reservoir in 1891 and after some delay, due to leakage from the dam wall, it was completed in December 1906.  This reservoir was commissioned to provide water for the ever-increasing industrial town of Huddersfield, which was full of woollen mills. 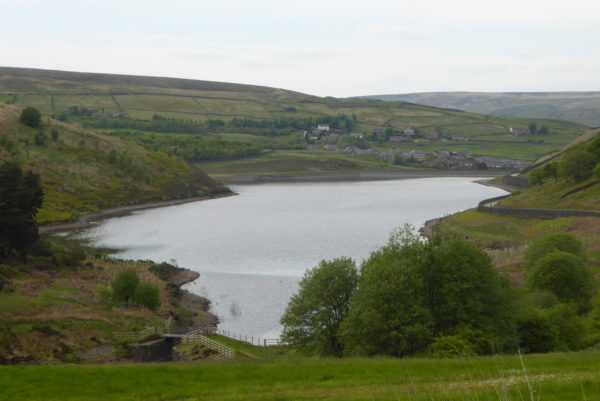 During the construction of the Butterley reservoir a temporary community was established close to the construction site to home the navvies hired for the work.  Apparently during an outbreak of smallpox in 1893 a cottage was used as an isolation hospital.  This cottage, Hole Top, was later submerged by reservoir water.

On reaching the dam we stop to take a look down the magnificent spillway it is a listed structure and was a part of the original design for the dam by the renowned Victorian architect and civil engineer Thomas Hawkley. 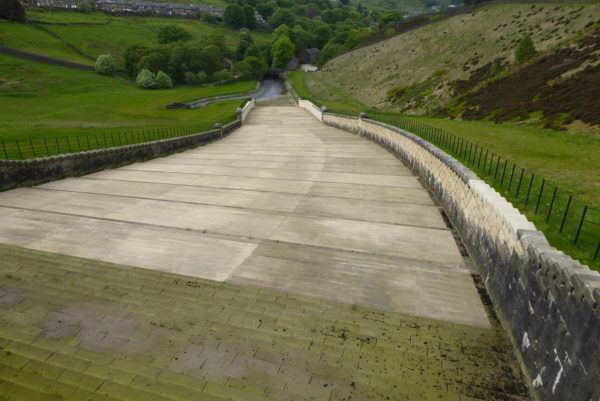 Returning to the track we soon take a footpath on the left heading downhill on steps besides the slipway. The view from the bottom is stunning. 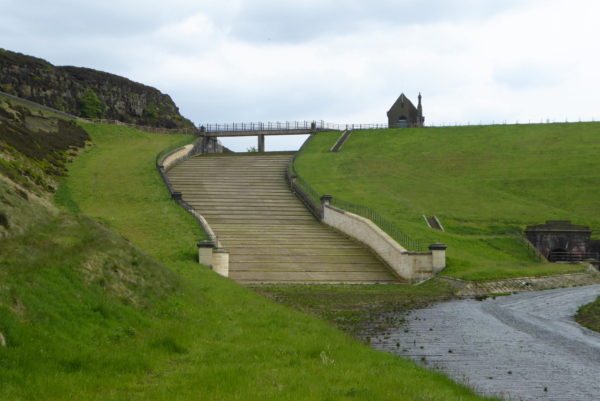 The footpath now heads into Marsden entering the town through the site of the disused Bank Bottom Mill.  This was first established in 1867 by John Crowther and was one of a number of mills owned by Crowther and Sons in Marsden and the Colne Valley. This is a huge mill, said to have been one of the largest mills in Yorkshire, apparently in 1936 it covered 14 acres used 680 looms, 43 carding machines and employed 1900 people. It closed in 2003 which must have had a major impact on the local economy. 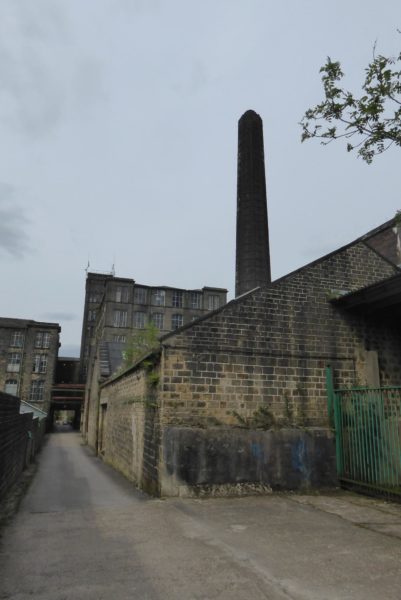 The local history group’s website is a source of interesting information about all the past mills of this town.  There were a lot of them!  After passing through the mill we reach Binn Road and turn left downhill. On our right is Ottiwells terrace. Close to here was the site of Ottiwell’s Mill, which was targeted by the Luddites.  The mill owner William Horsfall used soldiers and barricades to protect his shearing frames, used for cloth finishing.  In 1812 whilst returning from a cloth market in Huddersfield, he was shot dead by the Luddites on the Turnpike on Crosland Moor.

We head into the centre of Marsden, this has the feel of an industrial town still recovering from the loss of it’s mills, but with the potential to be re-awakened if ways to revitalise the local economy can be found. 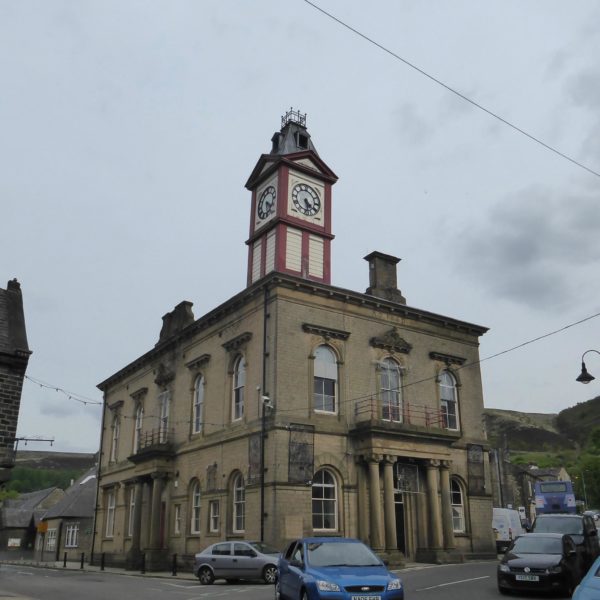 We leave the town on Old Mount Road soon passing the Puleside Working Men’s Club, I mention to Lynnie that members walking up the hill for a pint will certainly have earnt it by the time they get to the bar. This club was built by, and for, the navvies that worked on Butterly reservoir.  Apparently, being outsiders they were not welcomed in the town’s pubs, so they built one for their own use.  From this road there are wide ranging views back across the town dominated by Bank Bottom Mill. 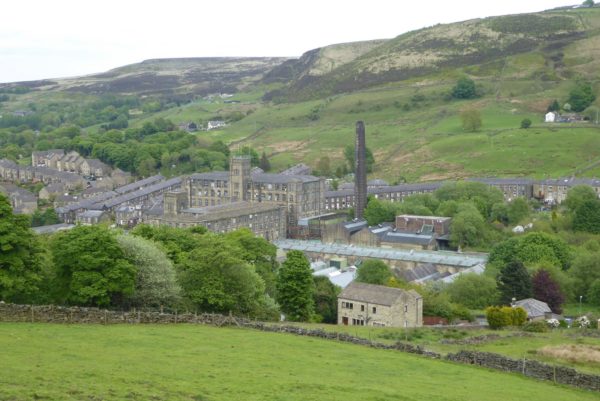 After passing the Marsden Golf Club we reach Mount Road, which we cross to join a footpath, The Stanedge Trail and follow this southwesterly across the moor. Soon on our right we see Redbrook Reservoir. 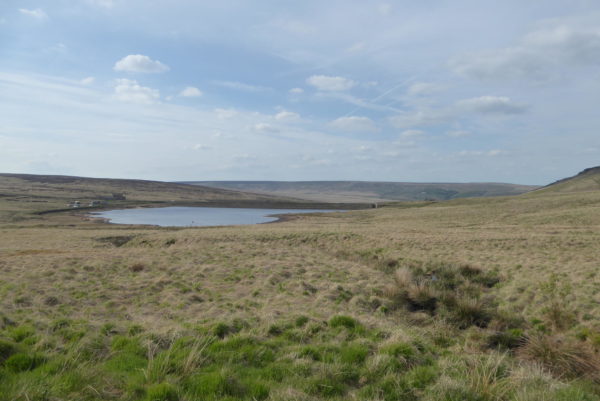 This small reservoir was built to serve the Huddersfield Narrow Canal running from Huddersfield to Ashton under Lyne.  The Standedge Tunnel runs under this moor, started in 1798 and completed in 1811 it is the highest and longest canal tunnel in the country.  It is an amazing 3 miles and 135 yards long.  The Redbrook Reservoir is connected to the tunnel by a 480 feet shaft, which as well as providing the water to top up the canal it is also an airshaft for the tunnel.

Originally the means of movement through the tunnel was by the use of leggers.  These chaps would lay on their sides and push against the tunnel wall with their feet. It took 4 hours to reach the other side. I have a vague recollection of seeing a feature on leggers in a Blue Peter programme when I was a nipper.  I think it was John Noakes who did the legging, but I’m not sure if it was through the Standedge Tunnel.

When the path we are on reaches the Pennine Way we turn left to join it and head across the moor on the clearly defined route. This is another section that has been laid with flagstones so is very easy to follow.  We soon reach Black Moss Reservoir, this and its two neighbours; Litte Black Moss Reservoir and Swellands Reservoir were also built to top up the Huddersfield Narrow Canal. 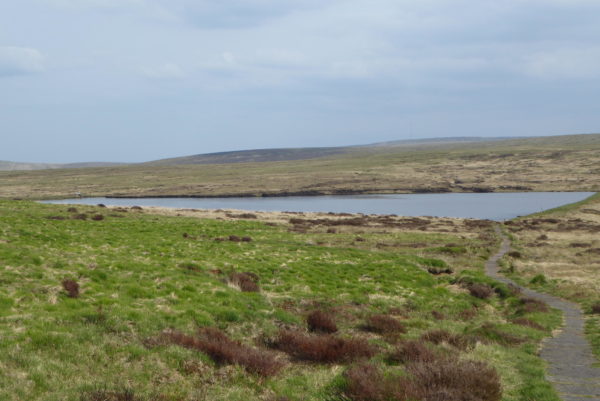 Apparently on 29 November 1810 the dam wall was breached on the Swellands Reservoir and water surged into Marsden killing five members of the same family when their house was swept away.  This became  known as the Black Flood. 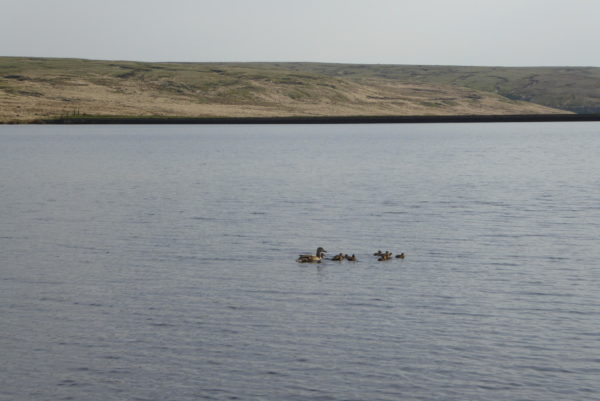 We stay on the Pennine Way as it heads across the moor and then alongside Blakely Clough that we soon ford to continue on the opposite bank. 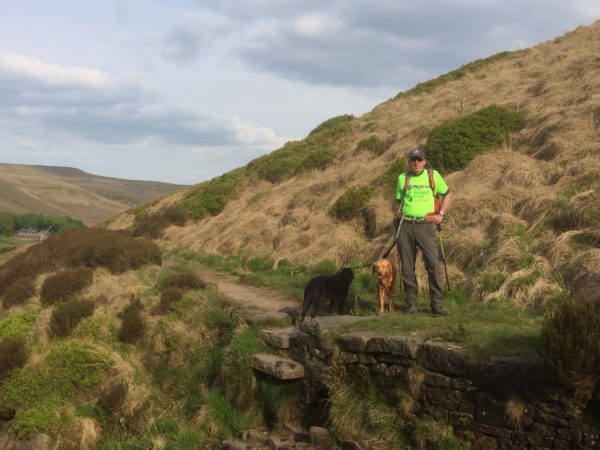 When the Pennine Way turns left we leave it and continue along a track that leads up a valley and crosses a stream close to a waterfall. 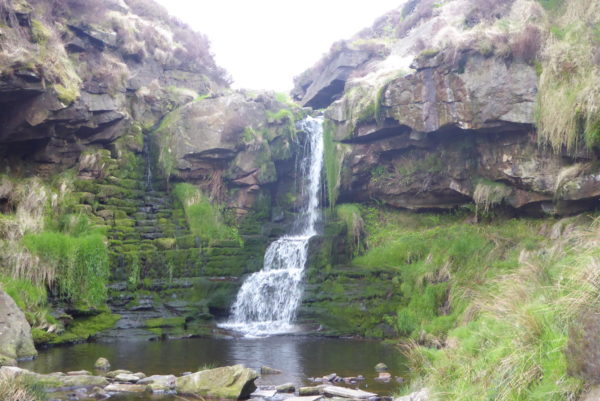 Continuing on the opposite side of the valley we head back towards Wessenden Reservoir.  At the reservoir we cross on the dam wall and then turn right to walk back uphill along the track we followed on our way down the valley. 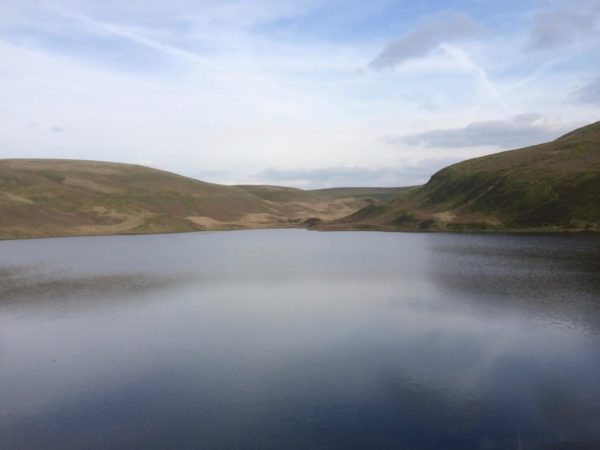 We head back along the track and then take an indistinct pathway to ascend the moor to find the trig point at West Nab, it is a very hard route, Lynnie is not best pleased, but it is well worth it when we reach the trig point, the 53rdOrdnance Survey trig pillar I have bagged. 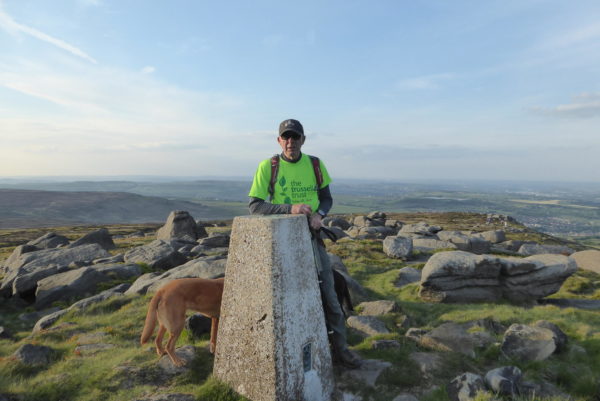 From West Nab we head downhill to reach the minor road and follow this back to the car.  Our walk has covered eleven miles and we have passed eight reservoirs of varying sizes.  It has been a stunning afternoon to be on the moors. 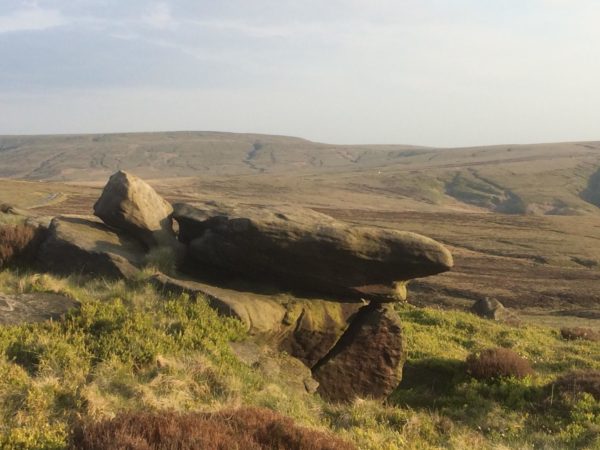