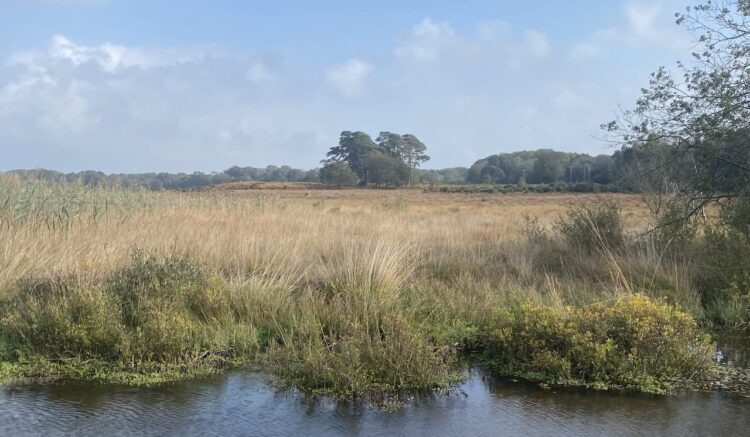 I am still exploring parts of the New Forest I have not previously walked.  Despite being so close to home it has never been high on my list of locations to walk.  However, since doing a navigation course there early last year I have begun to visit more frequently and have started to piece together the landscape.  An unexpected benefit of doing the navigation course was meeting the course leader Nigel, we have become walking buddies and his knowledge of the Forest means we visit some cracking spots.

Today I am meeting Nigel at the car park besides Burley Cricket Club, (Grid Ref: SU215029).  The car park also serves as a drop off point for the village school located across the Green so it is pretty busy with comings and goings.  I played cricket locally for nearly thirty years but never played at Burley, which is a pity because it is a cracking spot.  The club was formed back in 1875 and moved to this pitch in 1912.  The outbreak of the World War I saw the club suspend play, but they resumed again in 1918 and have played here ever since.

We leave the car park and cross the road and head west and then on meeting a minor road, Moorhill Road, we turn left and head south.  We leave Moorhill Lane to join a track signposted to Goats Pen Cottage.

The track leads over Shappen Hill where we start to descend towards a disused railway line.

On reaching the disused railway we turn right.  This is a section of the railway line that linked Brockenhurst and Ringwood, it was part of the line between Northam and Dorchester.  It was opened in 1847 and created at the instigation of a Wimborne solicitor called Charles Castleman.  The line took a circuitous route through the forest and was called ‘Castleman’s Snake’.

The route leaves the disused railway line and goes through a car park to cross a road and continue towards Long Pond.

We are now on open heathland surrounded by heather and dead bracken.  It is interesting that most other places I have walked recently the bracken has only just started to brown, whereas here it is dead.  Nigel tells me that in the forest the bracken comes up much earlier and therefore dies back earlier too.

We follow a path almost parallel to the railway line and then cross it on a bridge to head south towards Dur Hill Inclosure.

Soon at a junction of tracks we turn left and then very quickly take another track on the right which goes South and starts to ascend the hill.  Many of the trees in the inclosure have been felled, so what looks like woodland on the map is heathland.  We reach a four way junction of tracks where we turn left  and then at the next junction we turn right to head south along a track by a few remaining trees.  Soon on our right is the Dur Hill Ordnance Survey trig pillar.  This is the 283rd I have bagged.

From the trig post we head south on Dur Hill Down, along the way we meet a solitary cow.  There is no sign of any others so presumably she has become separated from the herd.  She stands in the path and nonchalantly watches as we pass by.

At the southern edge of the down we turn left and follow a path to cross a minor road at Cross Ways and then continue on the heathland opposite across Thorney Hill Holms towards Holmsley Inclosure.

We head through the inclosure in an easterly direction following clear tracks to reach a minor road where we right.  We now have a short section besides this lane we it leads to the A35.  At the main road we turn left and then cross almost immediately opposite the Holmsley Toll House.  I am intrigued that the house has a crest of Edward VII on it.  The association with royalty is unclear, apparently Edward VII liked to visit the forest, but why he would have a crest on a toll house is not recorded.  It is odd given that the toll house stood on an old turnpike and these were abolished in the 1880’s.

After crossing the road we continue heading east  on a cycleway through Brownhill Inclosure. Our route continues into Wootton Coppice Inclosure to reach a minor road at Wootton Bridge.  We turn left and cross the bridge and then stay on the verge beside the road.  Just before reaching a junction we go right on a cycleway which soon joins the track bed of the old disused Brockenhust to Ringwood railway.

We stay with the route of the railway until we reach caravans parked in the woods of Set Thorns Inclosure.  We have stayed at nearly a hundred caravan sites on our travels but never one that looks like this.  There are vans parked apparently haphazardly amongst the trees.  The wood is dense here and there is little light.  Many of the vans look like they have been pitched up for the season.  I prefer open spaces so it would definitely not be for me.

We follow a track through the caravans to reach the Set Thorns Inclosure car park.  Here we turn left and walk besides the road to reach a T- junction where we turn right and follow a path running parallel to the road signposted to Brockenhurst and Battramsley.  Soon after passing a track to the Longslade View car park we spot the Sway Ordnance Survey Trig Pillar on our left and wander across to bag my 284th trig.

From the trig we head in a northerly direction through the heather to pick up the track to the Longslade View car park and then continue along the track still heading north. The track soon starts to descend across Hincheslea Bog.  The recent rain means the water level here is high and has started to encroach on the track.

This is a cracking spot and an area of the forest I have not visited.  I must bring Lynnie here before too long.  The path starts to rise and enters Hincheslea Wood where it turns to the left through the trees.

Emerging from the trees we stay with a track heading across the gorse covered Horseshoe Earth to cross a minor road and then continue on a track to reach Wilverley Plain. Heading diagonally across this open space we see an abundance of sweet chestnuts.  This is odd because we are a long way from woodland and start to speculate as to how they could have ended up there.  We are heading towards Wilverley Inclosure, but before reaching the boundary of the trees we turn right along a broad grass path heading towards Wilverley Post.

Our intended route is across the A35.  The best option is to use an underpass a bit further north, so we before reaching Wiverley Post we turn right along a track that heads towards Markway  Inclosure.

As the track ascends we veer to the left towards the A35 and then pick up a path running parallel to the main road.  This path soon becomes an old tarmac road with the cat’s eyes still visible.  This was the route of the old road before the new road was constructed.  We descend to the subway and pass under the main road.  The last time I used one of these underpasses it was in the heat of the summer and the tunnel was congested with ponies trying to get some shade. Today it is much cooler so we have the passage to ourselves. On the far side of the road we turn to the left and follow a track before heading across the heather to reach the Markway Hill Ordnance Survey Trig Pillar, this is number 285 for me.

Returning to the track we turn left and head across heathland towards the Clay Hill car park.

The car park is fenced off and looks as if it is going to be permanently closed, however, I later discover the closure relates to work being carried out on the nearby Holmsley Rail Bridge, so presumably it will reopen at some point in the future.

We now follow a tarmac driveway from the car park that heads west.  This passes a pond at Holman’s Bottom.

After the pond we carry on to reach a road junction, we cross a minor road and continue west on a path besides Wilverley Road heading towards Burley.  On either side of this road is the attractive Burley golf course.  I played here about forty years ago, in those days green fees were paid into an honesty box and the clubhouse facilities were very basic.  The course opened in 1906 and although not particularly long it is interesting and challenging, not least because of the livestock that roam around the fairways. There are nine holes, but played off separate tees to make up a full eighteen. If I pick up my clubs and start playing again I will make a point of revisiting this course.

Staying parallel to the road leads us back to our starting point besides Burley Cricket pitch.  We have walked sixteen and a half miles through some places in the forest I have never been.  Gradually Nigel is changing my perception of walking in the New Forest so there is every chance I will be heading here again before too long.

You can view this 16.5 mile walk on OS Maps and download the GPX File Here (Subscription to OS Maps Required)