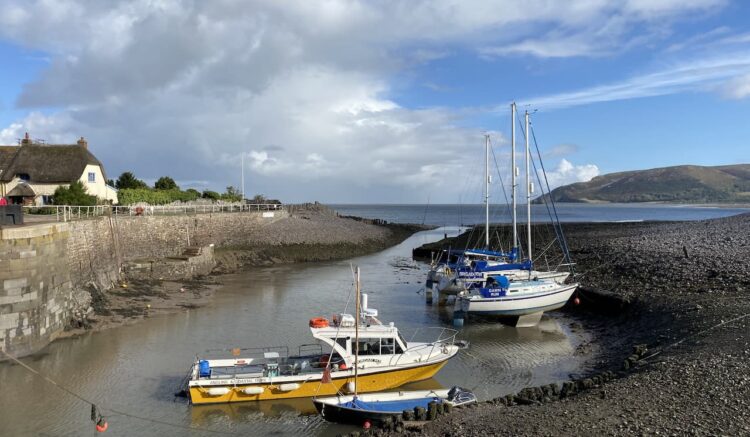 Almost exactly a year ago I took a trip to Minehead CAMC without Lynnie.  She decided to stay at home whilst Crosby and I walked on Exmoor.   During the week I did a number of cracking walks I had not previously done.  This year I have persuaded Lynnie to join us, I am not sure whether it was the thought of some new walks or the promise of visits to a few tea rooms that temped her.  I am pretty sure it was the latter.

The final walk on my last trip was a stunning, circular walk from Bossington visiting Porlock Weir, Culbone Church, Worthy Wood and Porlock.  At around 12 miles it is an acceptable distance for Lynnie and is a new walk she is keen to do.  Our starting point is the National Trust car park in Bossington (TA24 8HF) (Grid Ref: SS898479).

From the car park we join the road and turn right and at a junction continue on a right fork to head along a dead end lane passing Bossington Farm and heading towards the beach.

On the beach we turn left towards a World War II pillbox.

Just a bit further along is an impressive disused lime kiln.  This is the last remaining one of four kilns on this beach and is thought to have been built in the early 1800’s.

Close to the lime kiln is another pillbox, this one is a bit further inland and looks better protected from the ravages of the sea.

From the pillbox we take a path that goes beside a wall over marshy pasture and then at a junction of paths we turn left and follow a raised walkway across the salt marsh heading inland.  There are cracking views of Bossington Hill from here.

At a junction of paths we turn right and follow the route of the South West Coast Path towards Porlock Weir.  After crossing a footbridge over a stream we reach a memorial to the crew of an American Liberator bomber that set off on 29th October 1942 from Holmsely airfield in the New Forest as part of an anti-submarine patrol in the Bay of Biscay.  On its return flight it encountered bad weather and  clipped Bossington Hill.  The plane crashed on the marshland and eleven of the twelve man crew lost their lives.

We continue on the path through the petrified remains of ancient woodland on the marshes which formed part of a submerged forest.

We stay with the coastal path way markers and soon follow a shingle bank heading towards Porlock Weir.

As the path reaches a road we turn right and wander into Porlock Weir passing the Ship Inn, or Bottom Ship, as it is known.  This is because there is also a Ship Inn in nearby Porlock.

A bit further on we reach the harbour.  There was once a thriving industry here catching Oysters and the harbour was also visited by herring fleets.  These days the fishing industry is small, the harbour is mainly occupied by pleasure vessels, though oyster farming was revived in 2013 and they can be purchased at the harbour.

It is a pleasant, sunny, autumnal day and we decide to stop at a picnic bench beside the harbour and get a pot of tea from a cafe situated in the converted barns.  Lynnie seizes the opportunity to look at the crafts in the gallery.

Refreshed we resume our walk and take a footpath on the left just after the barns.  This goes up some steps to reach the edge of a field of pasture.  Now we follow the way-markers to reach a minor road where we turn right and continue down to the gates of the private toll road at Worthy.  This toll road on the Porlock Manor Estate was built in the 1840’s to provide work for local people following the Napoleonic Wars.  Originally the tolls were collected at the Ship Inn in Porlock Weir, but these days they are collected at the gates.

Our route continues on the coastal path through the arch to the right of the main gate and then goes steadily uphill passing through tunnels.  Apparently early in the 19th century the Earl of Lovelace built a home here for his bride, Lord Byron’s daughter Ada. This was a rambling folly called Ashley Coombe which was demolished in the 1950’s.  It is said that these tunnels were built so that Ada did not have to see tradesman delivering goods to her home.

The path steadily ascends through the trees, over time landslips have meant the path has been diverted, there is the occasional section where recent erosion makes the going a bit tricky and the walking poles are deployed for extra stability.  After getting the occasional view across  the sea to the south coast of Wales we start to descend into the hamlet of Culbone and  make our way to the churchyard.

St Beuno’s church still holds regular services and is said to be the smallest church in England seating just 30 people.  It is a cracking little church dating back to pre-Norman times, the porch was added in the 13th century.

After stopping for lunch on a bench in the churchyard we leave via a gate leading to a footpath beside a stream and turn right following the way-markers to Silcombe Farm.  This path goes by a cottage and then continues up through Withy Combe on a clear way-marked path.

At a junction of paths we turn left and continue heading uphill on a hedge lined track to reach a gate.

After going through the gate we continue along a track besides a field to reach another gate where we join a minor road near Silcombe Farm. Now we turn left and follow this lane, Yearnor Mill Lane, passing a series of entrances to farms, Parsonage Farm, Ash Farm and Yarner Farm.  Along the way there are stunning views of the coastline.

We are now on the Coleridge Way, I have walked a number of sections of this 51 mile route which goes from Samuel Taylor Coleridge’s home in Nether Stowey to Lynmouth. It is said that he walked the route frequently to visit friends.  Coleridge was mates with William and Dorothy Wordsworth, at the time Coleridge was in Nether Stowey the Wordsworth’s were also in the Quantock Hills at Alfreston, he was also a contemporary of Lord Byron.

We ignore a road to the right to Lynmouth and stay with Yearnor Mill Lane to a junction with Pitt Lane, here turning left we go steadily downhill to reach the entrance to the Worthy Hill Toll Road.   The toll road is not accessible to walkers so we take a footpath on the right signed to Porlock.  This goes through a gate and joins an attractive track through trees in Worthy Wood.

We are still on the Coleridge Way, but where it veers to the left we stay on the main track at the southern edge of the woods.  Then at a fork in the path we go left and continue downhill to a junction of tracks and turn left.  At the next junction of tracks we turn right and rejoin the Coleridge Way and follow the track to the Community Hall at Porlockford.  Now we turn right up a track besides the hall and then cross a stream at a footbridge on the left.

We are still on the Coleridge Way and follow this towards Porlock.  It is a wooded path but we get occasional glimpses of the coastline and Porlock Bay.

The path leads into Porlock where we turn left and wander through the village to pass the Ship Inn, or the Top Ship as it is known.  This pub dates back to the 15th century and as you would expect of such an old inn there are many tales of smuggling and other goings on.  The pub’s website has tales of its interesting history.

We continue through the village to pass the church of St Dubricius with its unusual spire that appears to have had the top cut off.

From the church we continue along the High Street and then take a left turn into Sparkhayes Lane and follow this out of the village towards the coast. At a junction of paths we turn right to join the South West Coast Path with a cracking view of Bossington Hill in front of us.

We now follow the way-markers back into Bossington to reach our starting point in the National Trust car park.  Our walk has covered 12 miles and has gained full approval from Lynnie.

You can view this 12 mile walk on OS Maps and download the GPX file here (Subscription to OS Maps required).