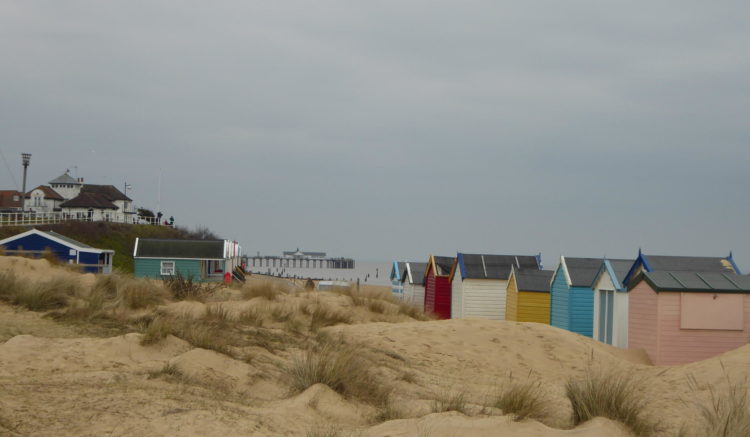 On the advice of our friends Richard and Trudie we are off to Southwold today. Their local knowledge has directed us to a couple of features of the town, including the harbour said to be a little gem and well worth a visit.

The starting point for today’s walk is close to the harbour but not on the Southwold side of the River Blyth. Instead we park on the Walberswick side, in the large car park at the end of the village close to the harbour.  A rowing boat passenger ferry crosses the river at certain times of the year, but it is not operating today and in any case we prefer to wander a round via the footpath besides the river. On the back of one of the sheds are markers showing the flood levels over the years. It is clear that 1953 was a bad year. 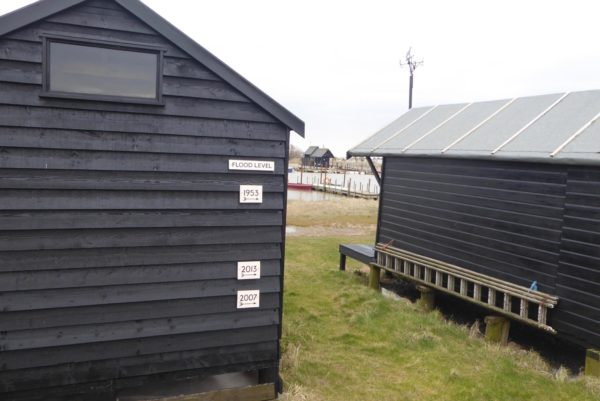 Years ago I read a book by John Timpson, the journalist and Today presenter, it featured the Great Floods of 1953. Until reading this book I was unaware of the devastation that these floods caused. Seeing this mark on the shed reminds me of the book which has long gone from my collection, but I will try and get another copy now I am familiar with the area.

For centuries this harbour was a very busy fishing port, the main catch was herring. However, this declined after the First World War and now it appears to be a combination of fishing and pleasure boats. 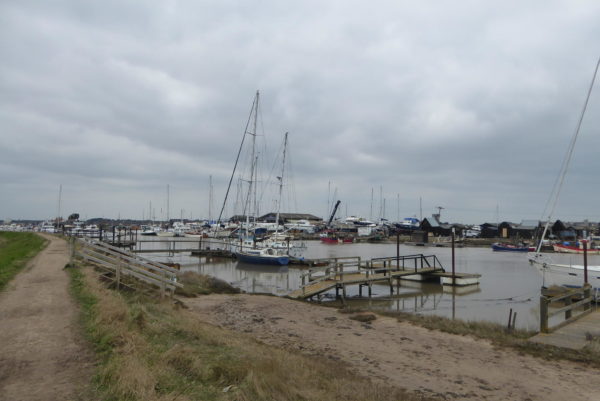 On reaching a bridge we cross the river Blyth and then turn right to follow the footpath down towards the harbour, soon reaching the Harbour Inn, which also bears a mark showing the 1953 flood level. 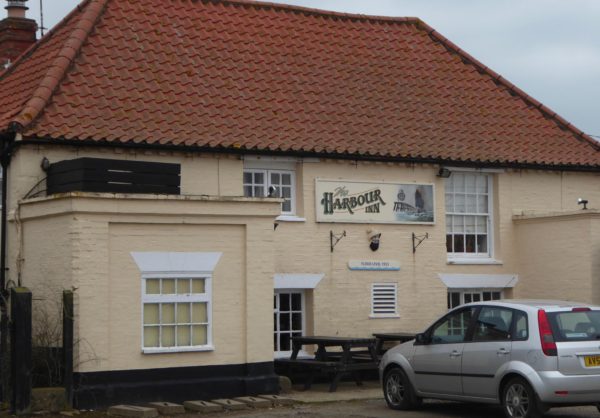 There is more activity on this side of the harbour with a number of boat yards and stalls selling fish. All is relatively quiet now, but I am sure that on a summer’s afternoon it would be heaving. The harbour is unlike any other we have visited on our travels. 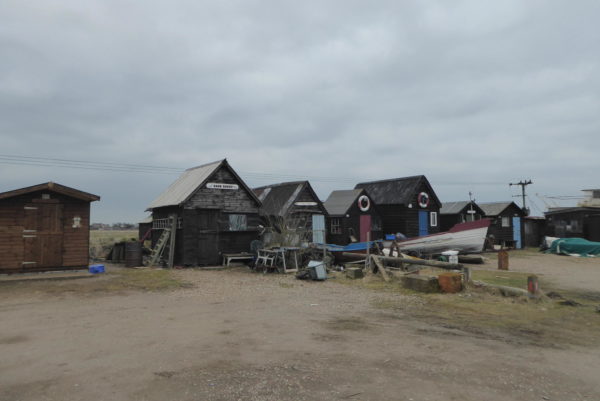 Leaving the harbour huts we continue along the track to reach the RNLI lifeboat station. Just across the car park is the Alfred Corry Lifeboat Museum, housed within the old Cromer Lifeboat station. This was built in 1923 and served as the lifeboat station on Cromer Pier but it was removed in 1997 so that a new lifeboat shed could be installed. The museum’s website tells the story of how the fine 52 ton listed building was transported to Southwold in 1998 and erected in its current location.  A few years ago we visited Cromer and I wrote about Henry George Blogg, the countries most decorated lifeboat man who served at this station for over 53 years. 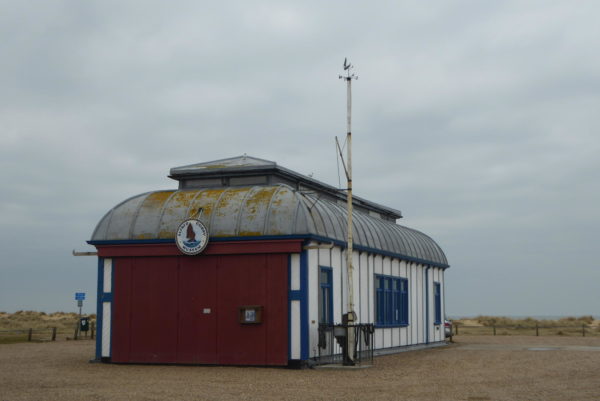 The Alfred Corry was the name of the lifeboat that served Southwold from the mid 1890’s until 1919. The boat was named after the benefactor who donated the funds for her construction. After being retired from service the boat was used as a yacht and house boat before being purchased by the great grandson of the first coxswain and restored and donated to the museum.

Unfortunately the museum is not open today so I add it to my list of places to revisit. From here we walk along the seafront towards Southwold. 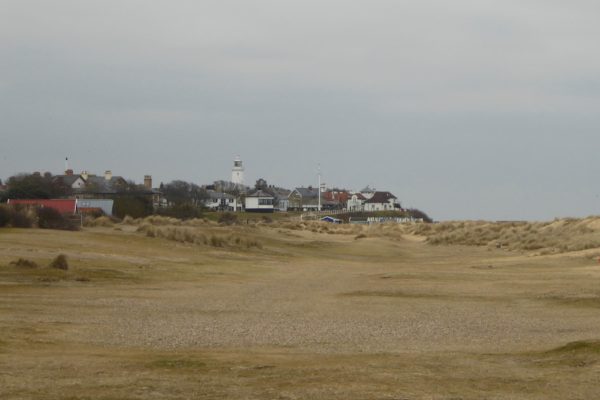 Reaching the promenade we are greeted by rows of brightly painted beach huts. I don’t know what it is about a row of well-kept beach huts but they definitely lift the spirits, even on a chilly overcast day like today.

We are heading to Southwold Pier, we have been told it is a must visit location and I hope the dogs are allowed on.  The sea looks peaceful and calm, but back in 1672 on 28th May, or 7th June depending on which account you read, the battle of Solebay was fought off this coast. Seventy-five ships of the Dutch fleet surprised ninety-three Anglo-French ships. A huge battle ensued with heavy losses on both sides. The Dutch lost two ships and 1,800 men and the English lost two ships and around 2,000 men. The French sailed south away from the battle. Both the English and the Dutch claimed victory! Subsequently the Royal Navy has named seven ships HMS Solebay to commemorate the battle. 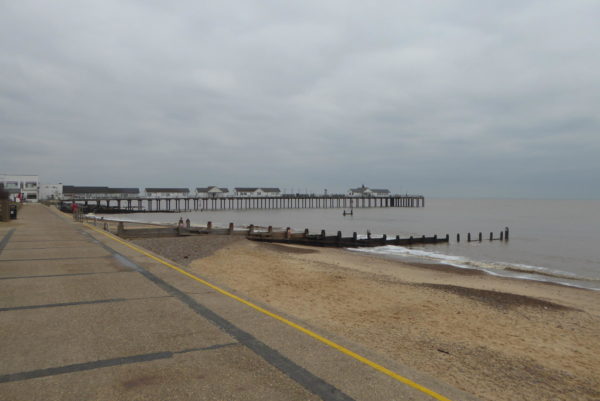 The pier was built in 1900 as a landing stage for steamships bringing tourists to the town. During World War II a section of the pier was removed to deter enemy forces from using it as a landing stage. After the War it was restored, but storms and fire caused serious damage over the years. 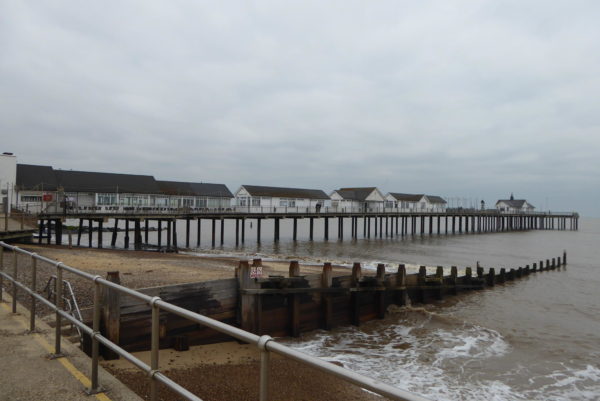 A major refurbishment started in 1999 and the pier was rebuilt. We have visited a number of piers on our travels but this is amongst the best. We are particularly taken by the water clock. An ingenious bit of engineering. 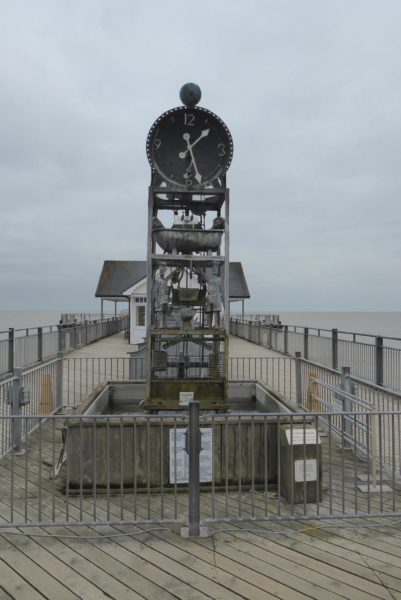 We wander along the pier and peek through the windows of the small shops, unfortunately they are closed mid-week out of season but they look to have an interesting array of items for sale. We are virtually alone on the pier and in no rush so we can take in the view of the town with its prominent lighthouse. 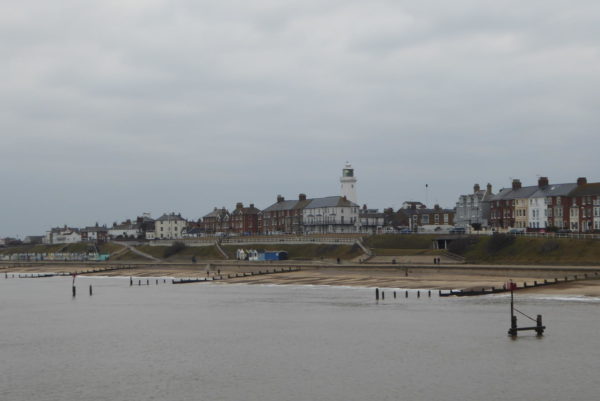 Leaving the pier we stop to look at the mural of George Orwell, a past resident of the town. 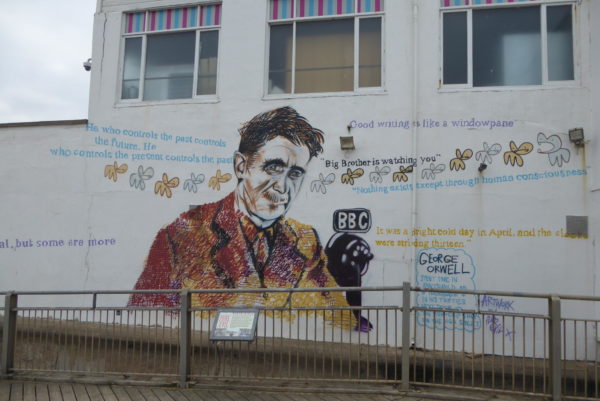 Walking back into the town we head towards the lighthouse. Unusually it is not on the sea front but located a couple of streets back. The lighthouse first became operational in September 1890. It was constructed to replace three other lighthouses that had been condemned due to coastal erosion; this probably explains why it is set back from the sea front. It is 102 feet tall and still operational. 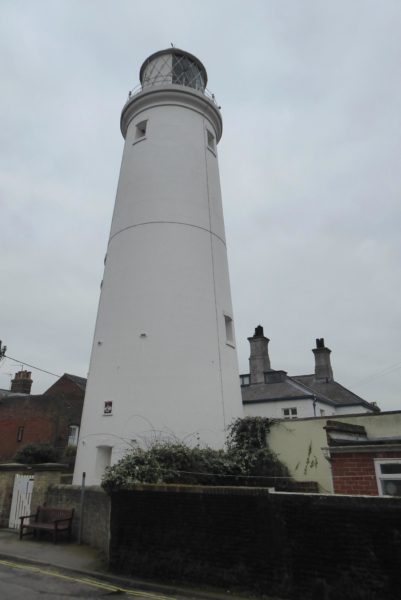 Just across the way from the lighthouse is the Adnams Brewery. Apparently back in 1872 George and Ernest Adnams purchased the Sole Bay Brewery and it has remained independent ever since with a member of the Adnams family still chairing the company. I have to say it quietly in these parts, but I have yet to find one of their beers suited to my taste. I am sure they brew fine ale, they have won numerous awards, and it’s just a matter of personal taste. 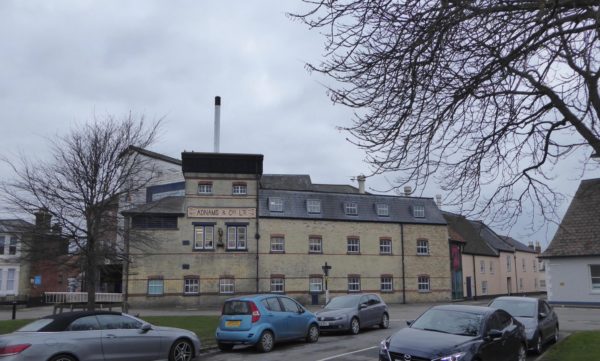 After the brewery we visit the splendid St Edmund’s Church. Built in the 1490’s externally it is a very impressive building. I wander around the outside whilst Lynnie pops in to look at the interior.

Internally the church is equally impressive. 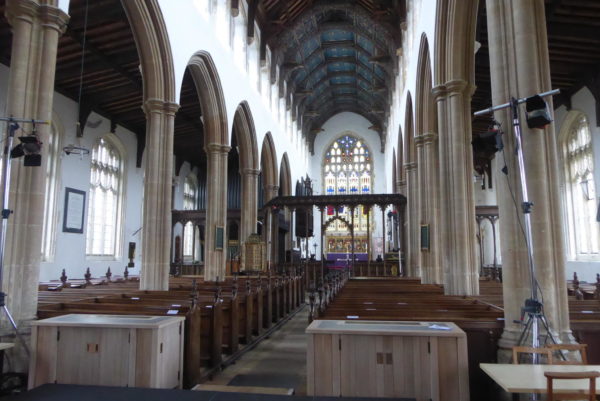 Dusk is falling and we need to get a bit of a pace on as we head back to the car. We take the most direct route following a minor road across Southwold Common and going between holes on the golf course.  In front of us are two water towers. The older of the two was built in 1886 for the Southwold Water Company with a capacity of 40,000 gallons and was operated by a wind pump. It is reported that in 1899 the resident caretaker, George Neller, was crushed to death when his coat got caught in the pump’s machinery. 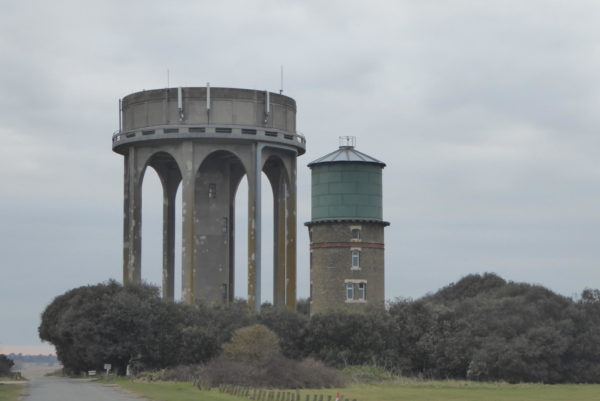 In 1937 a new art deco water tower was constructed to cope with the growing demands of the town, this tank holds 150,000 gallons of water. The old tower changed hands a number of times and amongst other things was used by the RNLI as a lifeboat museum and by Adnams Brewery. In 2005 it was converted into accommodation and used by a holiday cottage company. There are certainly a lot of holiday cottages in Southwold, which probably accounts for why it has been so quiet on a midweek afternoon in March.

We continue along the road passing more of the golf course and the entrance to the clubhouse. Southwold Golf Club, founded in 1884 was one of the first in East Anglia.  Originally it was set out as a nine hole course and then in the early 1900s extended to eighteen holes by using low lying marshland. However, the aforementioned devastating floods of 1953 destroyed these holes and it reverted to nine holes.

We reach the harbour close to the Harbour Inn and turn right to reach the bridleway over the River Blyth before retracing our steps back to the car. 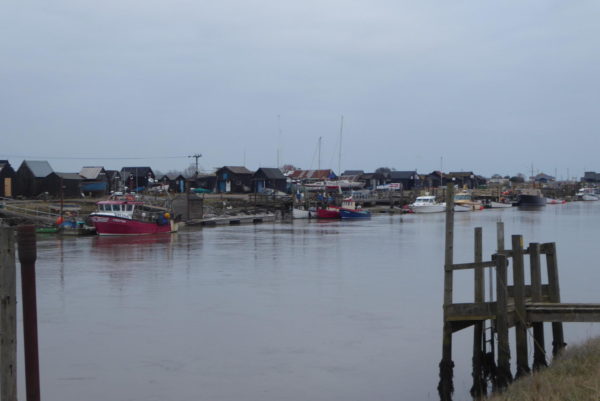 Our stroll around has covered five and a half miles and has made for a stunning afternoon. Tomorrow we move on, heading inland towards Bury St Edmunds but we are already talking about when we can find time to return to this area.

To view this 5.5 mile walk on OS Maps Click Here