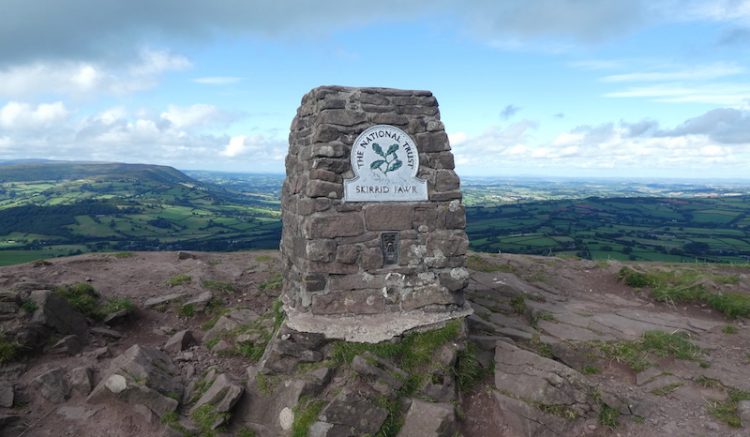 Yesterday’s car journey to the Caravan and Motorhome site at Pandy took me close to Skirrid Fawr and I mentally added the peak to my walking itinerary for the next few days.   Descending from Hatterrall Hill yesterday evening it made an impressive sight standing separate from the surrounding Brecon Beacons and I have decided to venture up there sooner rather than later so I have plotted a route for today from the caravan.

Leaving the site I turn left and cross the river and at a road junction turn left on a minor road signposted to Llanthony.  I stay on this quiet country lane as it heads in a southerly direction.  Walking along I get the occasional glimpse of Skirrid Fawr, also known as Ysgyryd Fawr, and it looks as if I am in for a steep ascent later. 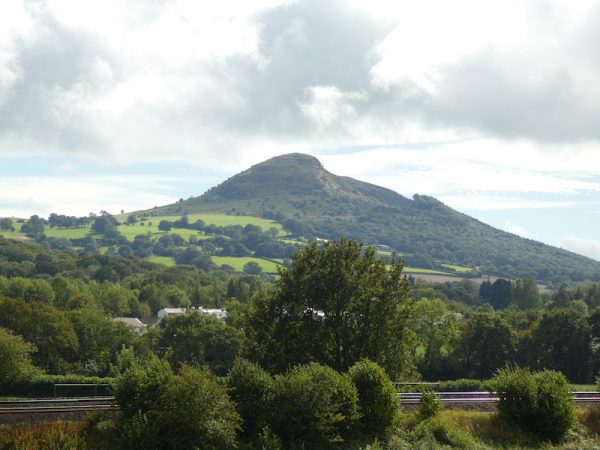 The road heads under a railway line with ominous markers to show the depth of water lying under it.  Fortunately this is not an issue today, but there must be times of the year when this road is impassable. 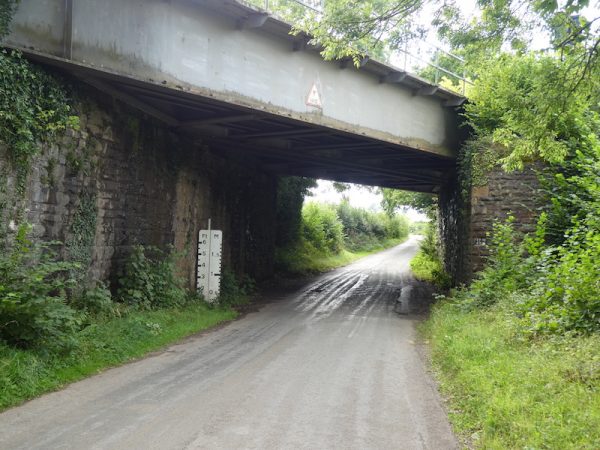 I continue along to reach LLanvihangel Crucorney, after crossing the Afon Honddu I turn left at a junction and head steadily uphill.  At a junction I turn right passing The Skirrid Inn.  The sign outside claims this is Wales’ Oldest Inn, said to date from the 17th century with claims of an earlier inn on the same site. 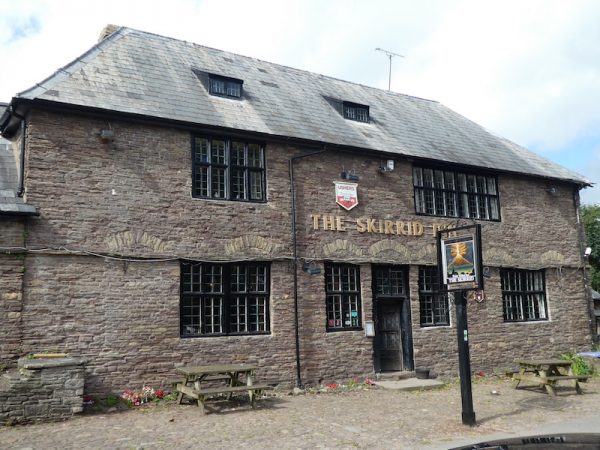 There is a rich history associated with the pub, including a disputed claim that Owain Glyndwr rallied troops here to attack the English supporting Henry IV.  Allegedly the Inn once housed a court where capital punishment was a regular sentence with the offenders being hung from the stairwell.  Not surprisingly it claims to be haunted and has featured on TV programmes on the supernatural.

I have too far to walk to venture inside the bar, but hope to find an opportunity to return whilst in the area.  A bit further along the road is the church of St Michael and All Angels.  It is said that this Norman church replaced the chapel of St Michael that stood near the summit of the Skirrid.  Over the years extensive works have altered the church with the tower being added in the 16th century. 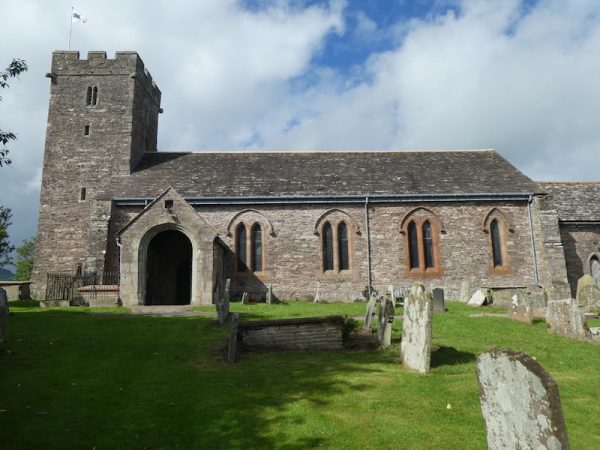 From the churchyard I cross the road and take a footpath heading downhill to reach the A465, I cross and continue along a footpath that follows a driveway to Llanvihangel Court.  I am now following the route of the Beacons Way and stay with this, ignoring footpaths to the left and right, to head around the Court. 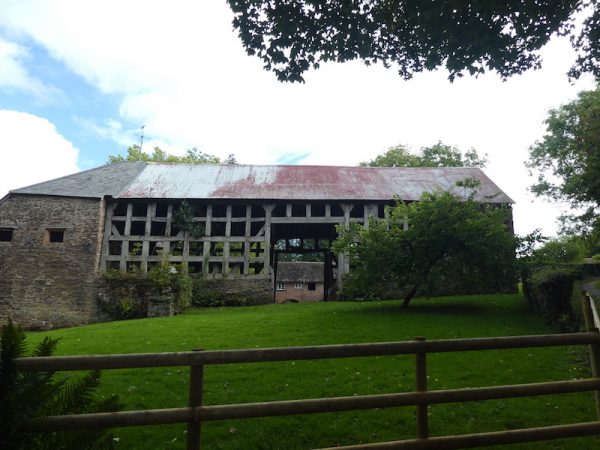 It is not possible to get sight of the house, originally constructed in 1471 and then enlarged in the 1600’s.  I walk by an impressive old open barn and then staying on the Beacons Way go through a gate and across pasture. 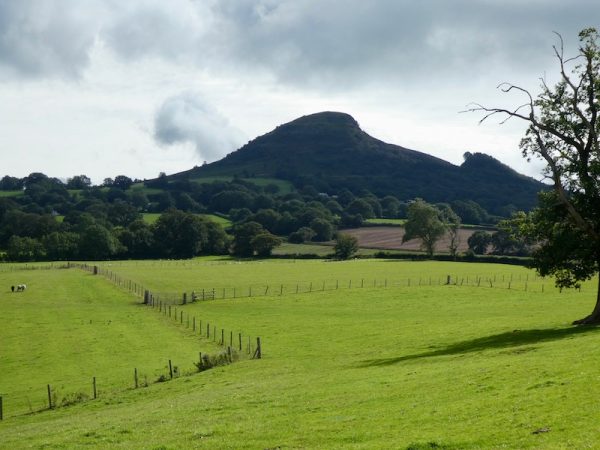 The path continues on through a couple of pasture fields with a series of what appear to be mileage stones. 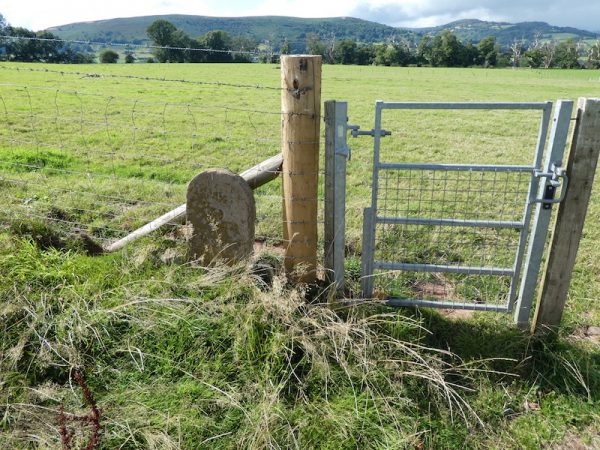 I cross a footbridge and go through a copse to emerge into another field of pasture. 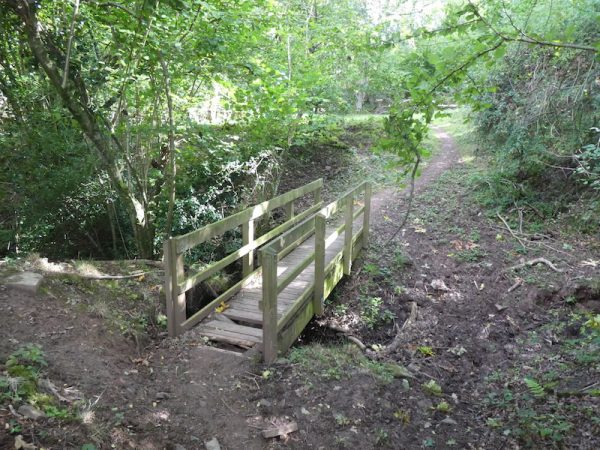 Still following the way markers for the Beacons Way I head steadily uphill through another couple of fields, as I near a minor road I stop to admire the view behind me and realise I am being followed by a flock of sheep. 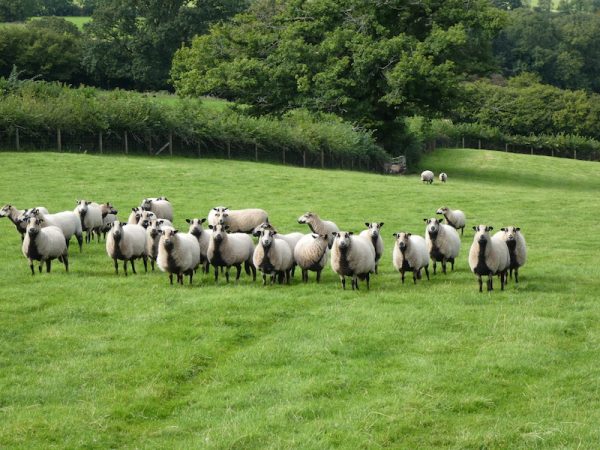 At the minor road I turn right and follow it until I reach a sign for the Beacons Way on the left, this path heads steadily uphill with way markers making the route easy to follow. 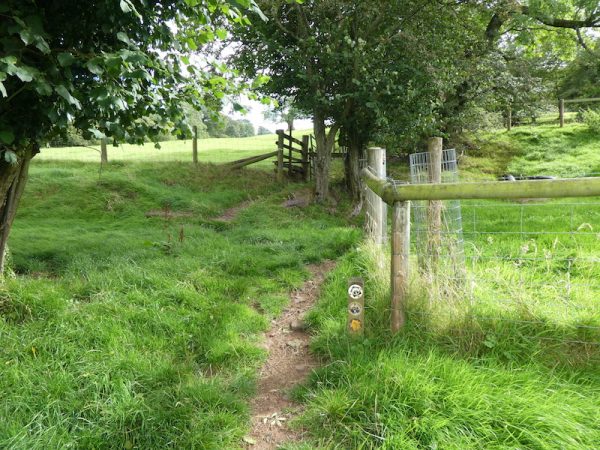 After going through four fields I reach the edge of access land surrounding Skirrid. 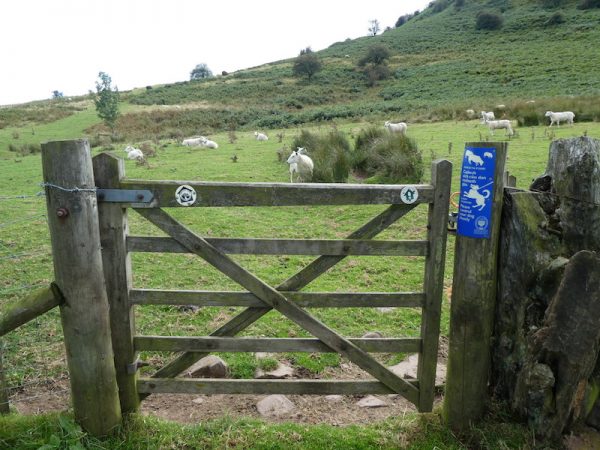 There are a couple of options to the top of the mountain. It is either a short steep scramble or a long steady ascent.  I go for the latter and keep with the Beacons Way as it goes up through the bracken. 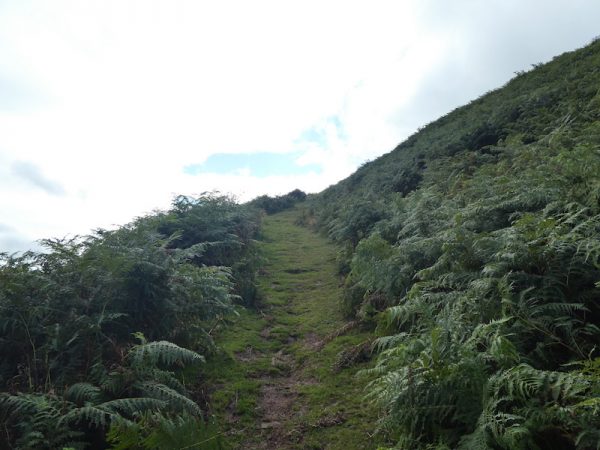 On the ridge at the top of Ysgyryd Fawr I turn to the right and head along to the Skirrid Fawr trig pillar, this is the 162nd I have bagged. 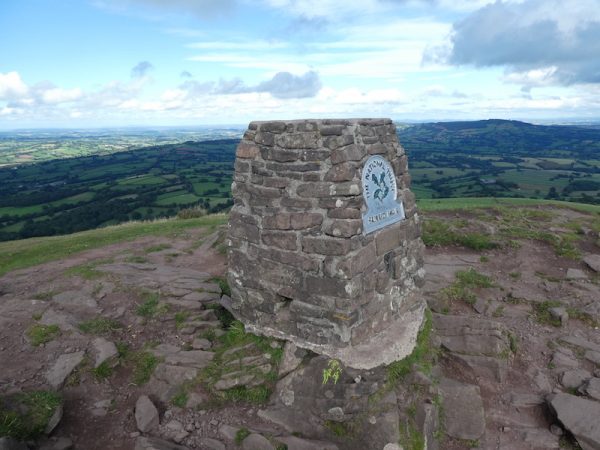 The views on such a clear day are stunning. 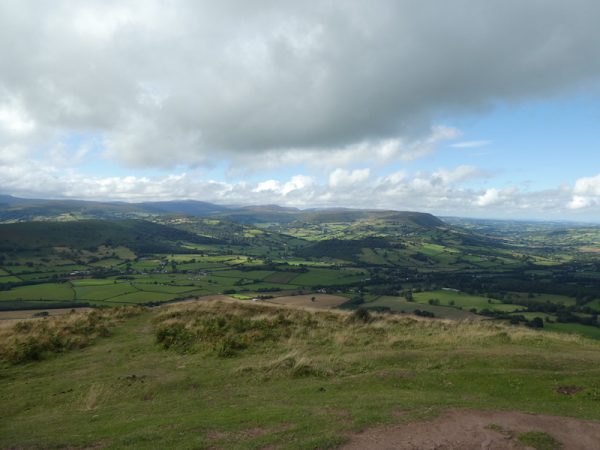 There are a few others sat around the trig point, it is obvious from their attire they have parked in the nearby car park and wandered up to the summit.  I usually find that fellow walkers meeting at a trig point like to engage in conversation about the route they took or other enjoyable walks they have undertaken in the area.  However, the casual visitors do not see any point in talking to a stranger.   I turn and walk back along the ridge. 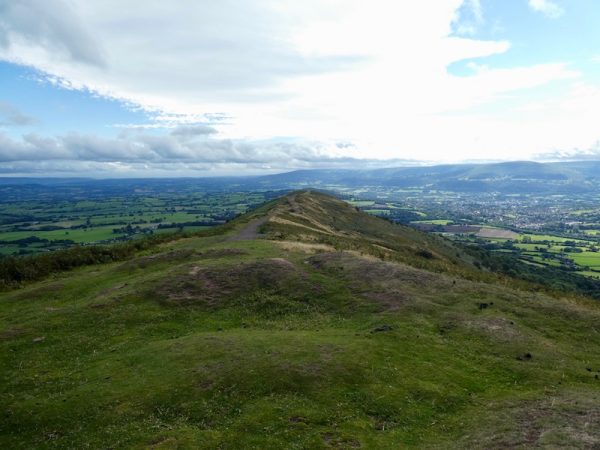 To my right is Sugar Loaf standing dominant over Abergavenny.  This mountain is on my “must visit” list for this week. 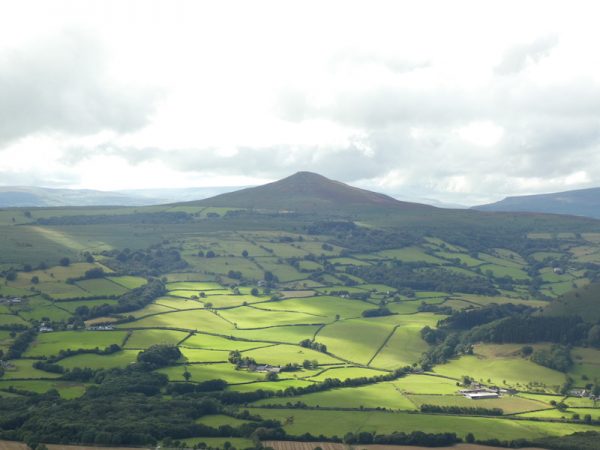 Further along I get a good view of Blorenge to the south of Abergavenny, yet another peak I plan to visit whilst staying at Pandy. 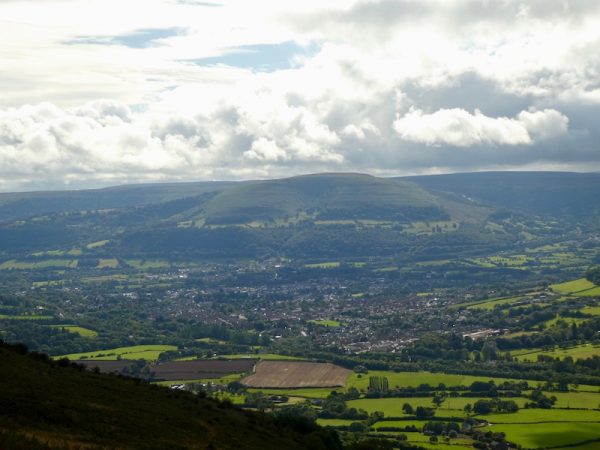 My route down follows the path along the ridge before descending steeply towards Caer Wood. 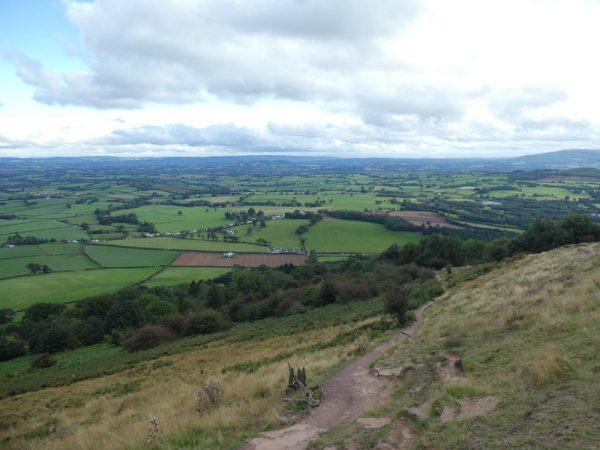 The path steepens further as it enters the woods and then becomes more of a broad path as it heads south towards a track leading to a car park. 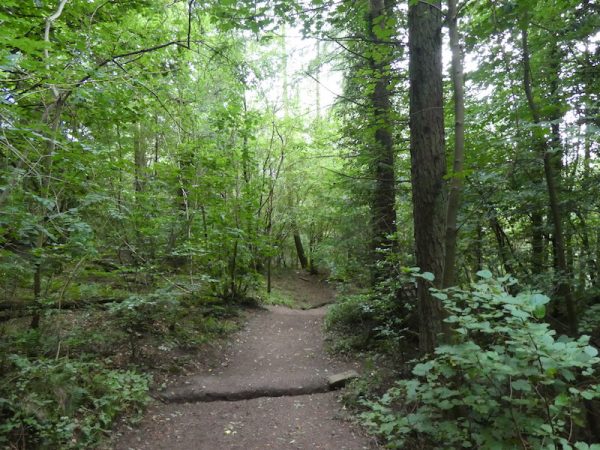 As I near the busy B4521 I take a footpath going through a field on the right. Following the way markers I reach a field of lively horses and proceed cautiously. After crossing a stile I continue through fields towards Pant y Skirrid. 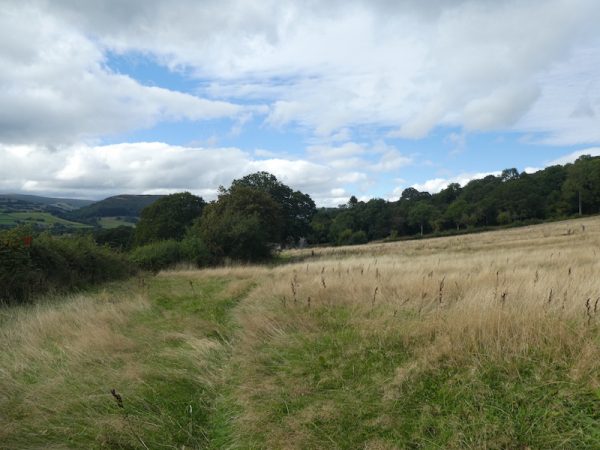 After crossing a footbridge close to a cottage I continue through fields until I reach Dan-y-Skirrid from here I head towards the minor road to the west.  As I turn there is a cracking view of Sugar Loaf. 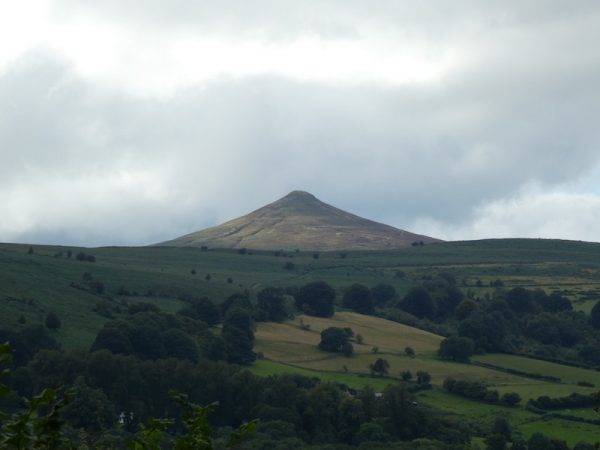 On reaching the minor road I turn right and then follow it for approximately two and half miles passing some fine old stone farm barns as I near a road junction. 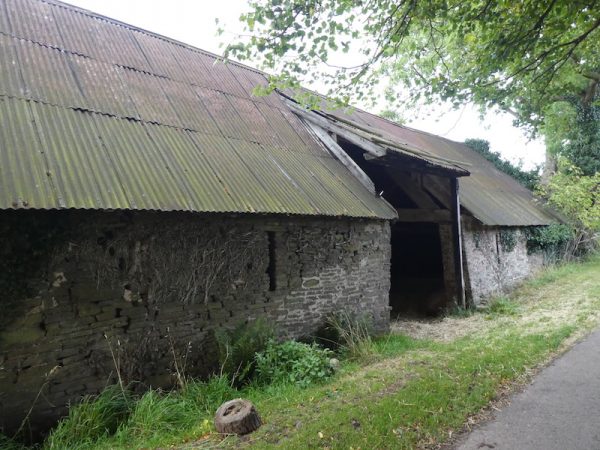 At the junction I turn left and follow this lane for a mile to another junction.  Here I turn right and head steadily uphill for the best part of a mile.  I now turn left towards Pandy, before I start to descend I get a fine view of the Black Mountains. 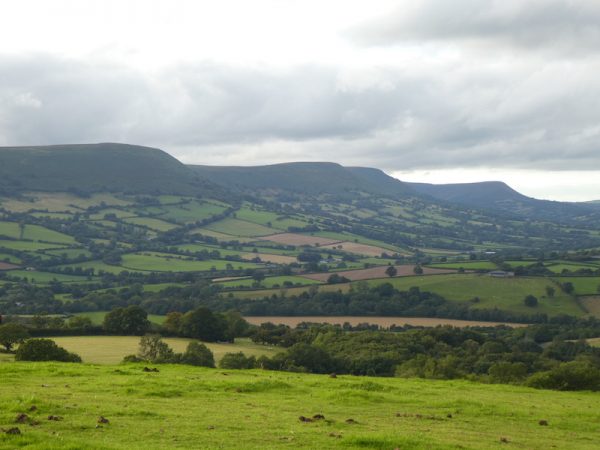 This lane heads steadily downhill into Pandy and eventually reaches the A465 where I cross and then turn right to walk along the pavement to reach the Old Pandy Inn. 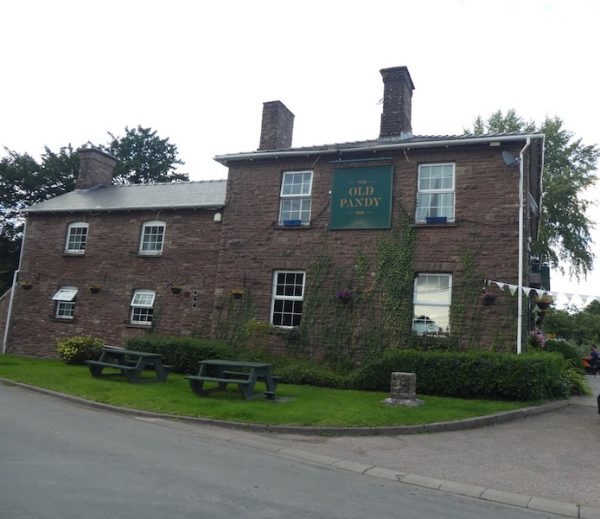 From here it is a short walk back down the lane to the caravan site.  My walk has covered twelve and a half miles and has been very enjoyable even with large chunks of it being on very quiet country lanes.