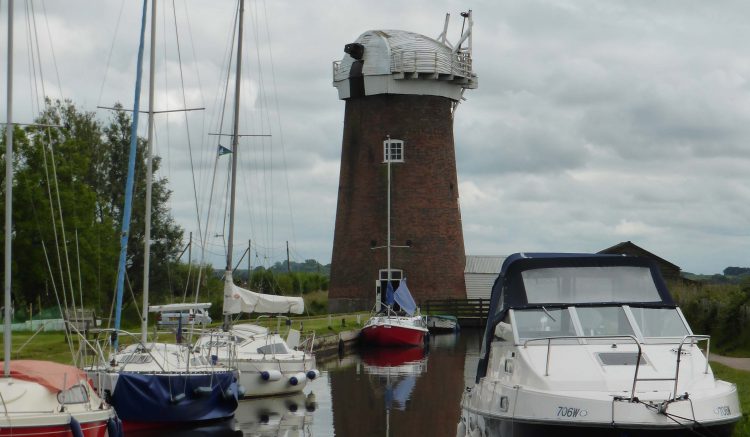 Dexter is looking brighter today. Clearly two days of rest have helped and he is walking without a limp. He has become a bit cussed and stubborn as the weeks have gone by. He has a favourite spot, the back of the Freelander with the boot open and with luck the sun shining in. He prefers it if the back of the car is facing out onto the site so that he can keep watch on things from his vantage point. As soon as he has consumed his breakfast he trots to the car and whines to be let in.

He has spent the morning surveying the surroundings and taking the occasional nap. Meanwhile Crosby has been lying out relaxing in a sunny spot in the awning.

It is our last full day in Norfolk and Lynnie wants to visit a windmill. For the last thirty plus years I have made it my main aim to ensure that Lynnie gets what she wants. Even though sometimes she does not realise it is what she wants, for instance the Unicorn.

I am particularly skilled at picking up the hints that she drops occasionally and then when it is her birthday or Christmas proudly presenting her with the said item. There are many examples, one year she was complaining that she was always burning her hand taking hot things out of the oven – Christmas arrived and so did a pair of oven gloves! Another time she was worried about hurting her ankle when crushing cans – so that Christmas she received a can crusher. Probably my proudest moment was picking up complaints about the ironing board, that year Christmas came and so did a new ironing board and with a de-luxe cover. There are times that I think I might be spoiling the girl.

Today’s Windmill is at Horsey. Horsey Windpump is maintained by the National Trust. Is a four-storey windpump that was used for extracting water from the surrounding ditches. Generations of millmen worked at Horsey and there is a small cabin where they would sleep overnight. The mill was struck by lightening in 1943 and ceased operation, it was taken over by the National Trust in 1948 and restoration started in 1961, it was fully restored in 2004, but the sails are currently off for further restoration.

We climb the steep steps to the top of the mill. I peer out through the door but will not venture onto the balcony. Lynnie, far braver, steps out to get a view. 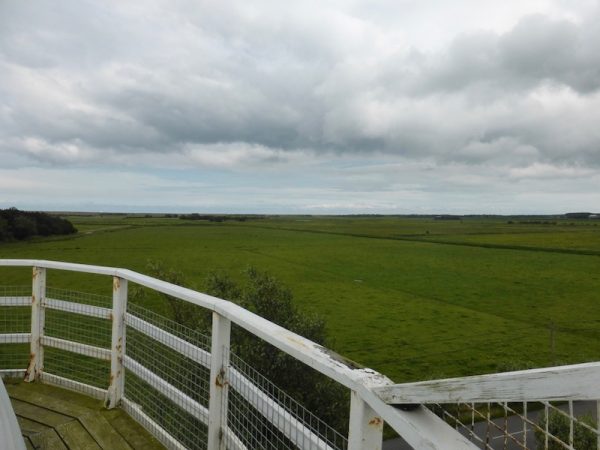 Cautiously we descend, it must have been hazardous running up and down these steps when the mill was in full operation.

Dogs collected from the car we walk along the footpath beside Horsey Mere, the sun is out and there is a stiff breeze but oddly the heat from the ground is making it very warm at knee level. The ground is noticeably warm to the touch. The dogs are unsure about this strange environment.

We walk to Brograve Mill, this mill is in a dilapidated state. It was built in 1771 and is thought to have last worked around 1930. It is a pity to see it in its current state, it looks like a strong gust of wind would blow it down. I suppose it is ironic that a building that was constructed to harness the elements will soon have succumbed to them. 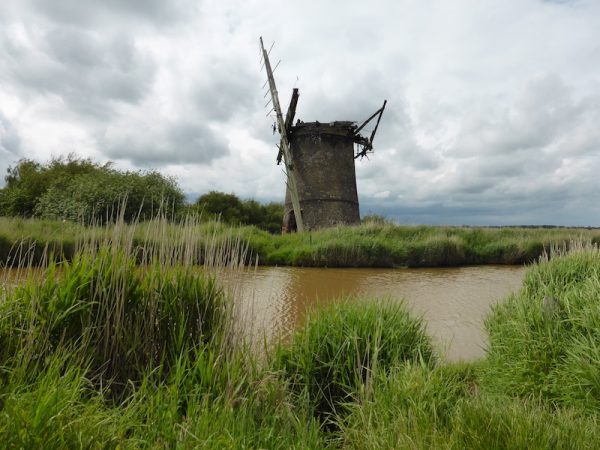 From here we follow the footpath alongside Brograve Drainage Mill, around Horsey Corner and then a short walk alongside the road before turning left to join the track that takes us to Horsey Gap. 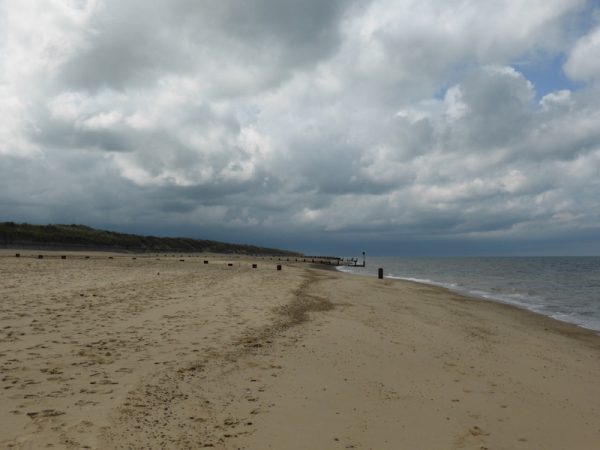 The beach and dunes are home to a colony of grey seals. In November you can see the pups at close quarters, today we see no seals at all. The beach is deserted, no sight of anyone in either direction, we must be the only people on this two mile stretch of beach. 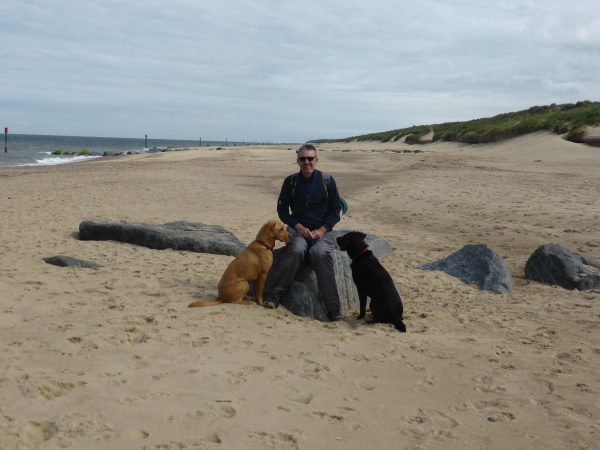 The dogs enjoy a paddle and scavenge. Dexter is looking like a youngster again. 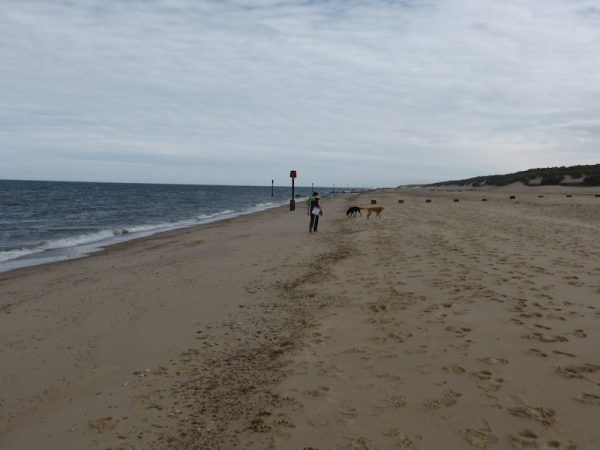 After a stretch along the beach it is back across the substantial sea defenses and into the village of Horsey before returning to the car. The sea defenses do need to be substantial. On 13th February 1938 a combination of northwesterly gales, abnormally high tides and a full moon resulted in the sea breaking through the defenses at Horsey and an area of fifteen square miles was flooded. The sea defenses were breached again that March and April. There were only twenty-seven acres in the fifteen square mile area that was not flooded by seawater. It took five years before the land could be reused for agriculture.

Back at the Unicorn Dexter relaxes, he has walked six miles and is showing no ill effects so hopefully is on the road to recovery. Tomorrow we are all on the road to Louth.