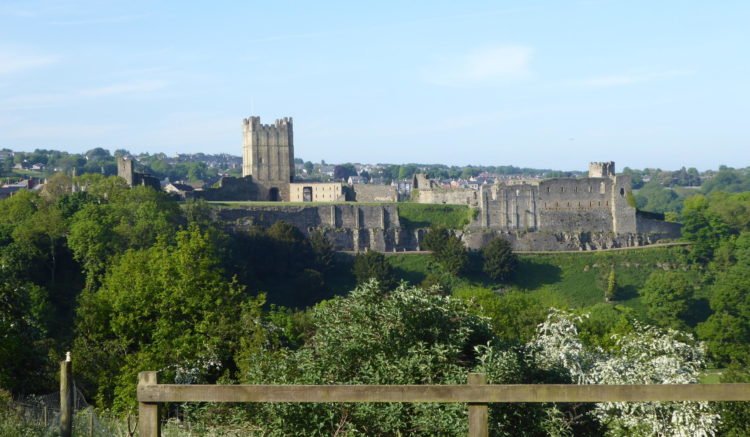 Today we decide to walk from the site rather than take the car; I like to have a couple of days each week when I don’t drive.  We leave the site by the entrance drive and turn right into the village. Just before the village hall we turn right on a footpath that passes the playing field.

We follow the path to the left along the top of the Hudswell Bank and on reaching a footpath descending steps we head downhill, soon passing a disused quarry. 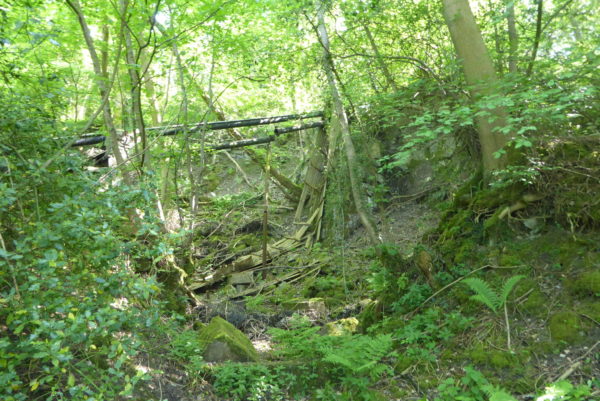 Two thirds of the way down the steps we turn right along a footpath through Hudswell Woods. The National Trust owns this attractive woodland, there is said to be a network of over five miles of footpaths within it and the adjoining meadows.  It is a tranquil spot with a constant cacophony of bird song. 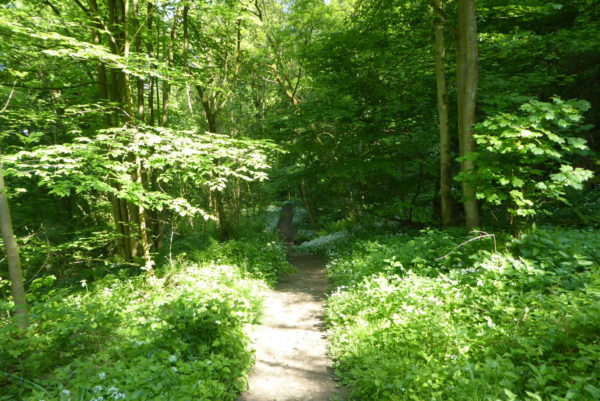 As we go under Hudswell Bank we pass disused quarries. 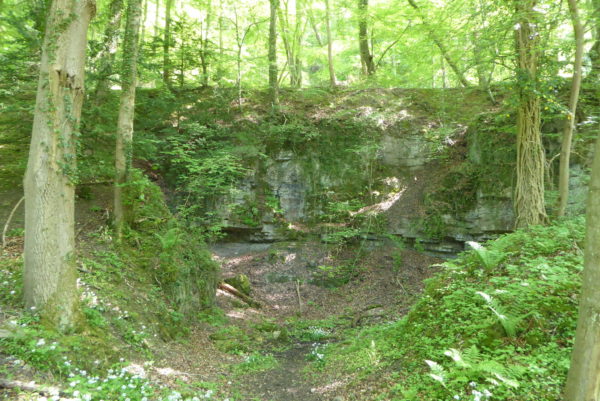 The path descends close to the River Swale and then climbs steps to reach a footbridge over the river. 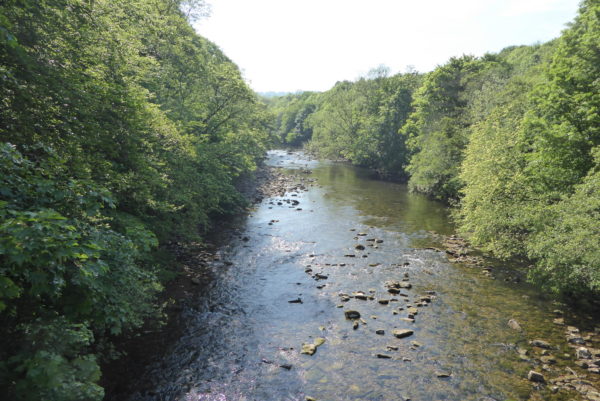 After crossing the river we turn left to follow a footpath besides a car park and picnic area, with the river on our left. The car park is being used as a temporary site by those travelling with the funfair that is currently set up in the centre of Richmond.

The path leads into woodland and as it forks we take the right option to head away from the river towards the A6018, Reeth Road.  Crossing with caution, we pick up a footpath along a track.  After a couple of hundred yards we leave this track to join another one, Green Lane, which heads steadily uphill. 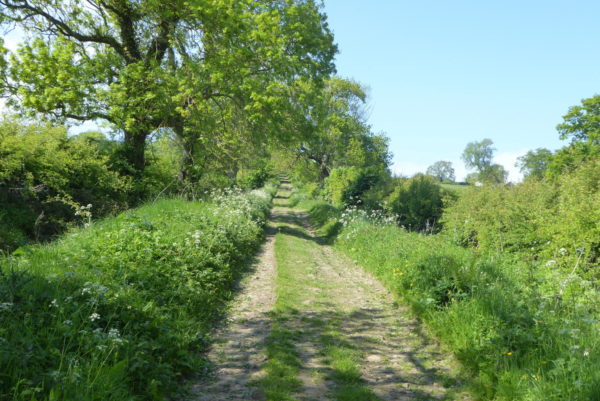 After passing Low Leases the path continues to climb.  Coming to another track, we turn left to head west and soon reach a stone bench with views back over Richmond. 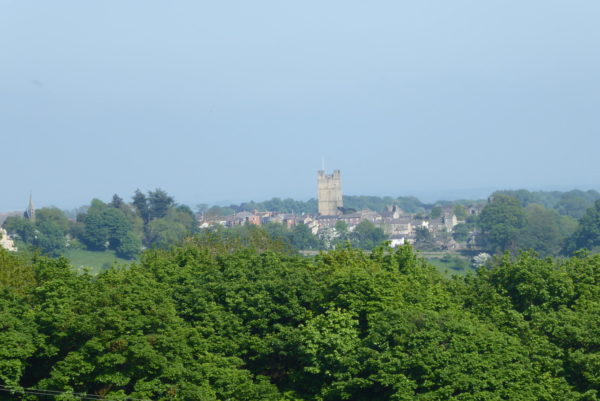 The bench has a plaque with a quote from Alfred Wainwright describing this point on his famous Coast-to-Coast walk.  From here folk following the 190-mile route are 113.5 miles from St Bees Head and 76.5 miles from Robin Hoods Bay.

Shortly after the bench, at Whitcliffe Farm we turn right up another track.  This soon becomes grassy and then goes through a gate to enter High Moor.  After a short section across moorland we cross a field of pasture to join a walled track. Unfortunately a proliferation of nettles and thistles makes this short section difficult, but we beat a way through to reach a gate onto a minor road.

Turning left we follow the road to a footpath on the right, we take this into a field of pasture and head up to Beacon Hill. 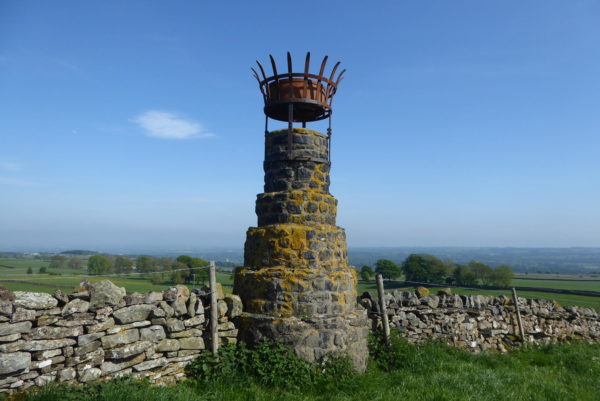 Close to the Beacon is an Ordnance Survey trig point, rather than standing on its own this one has been incorporated into a wall.  This is the 58thtrig point I have bagged. 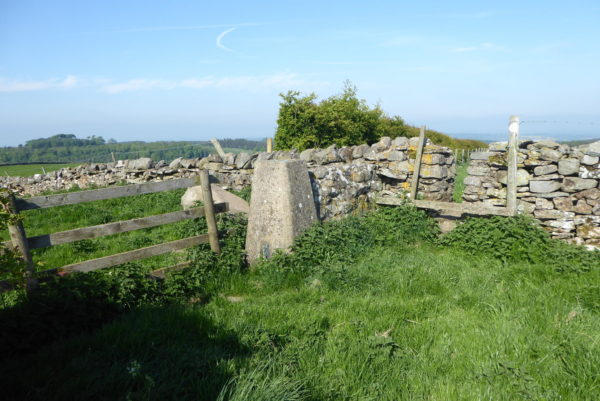 From the beacon and trig point we head east along the footpath through a field to reach a lane where we turn right heading steadily downhill.  At a junction we turn left and walk besides a minor road, coming to a parking area on the left, we walk through it to the open land of Low Moor, which used to form Richmond Racecourse.

The information board states there is a long history of horse racing associated with Richmond.  Race meetings were held as far back as the 1600’s. In 1765 Richmond Corporation set out the track on this site and by 1775 money was raised by public subscription, what we now call crowd funding, to build a grandstand.  This was designed by John Carr, who was also responsible for the grandstand at York racecourse.  Sadly the grandstand has fallen into ruin, but it is still possible to get a feel of its former grandeur. 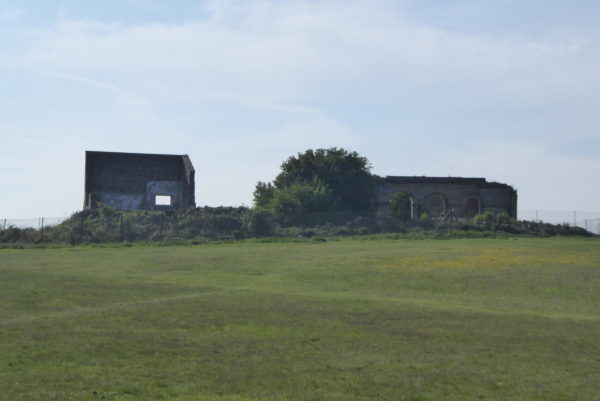 Apparently as horses were bred to run faster the tight corners on this course became dangerous and in 1891 the course was declared unsafe for racing.  It is still used as gallops by local trainers and is a fine open space. 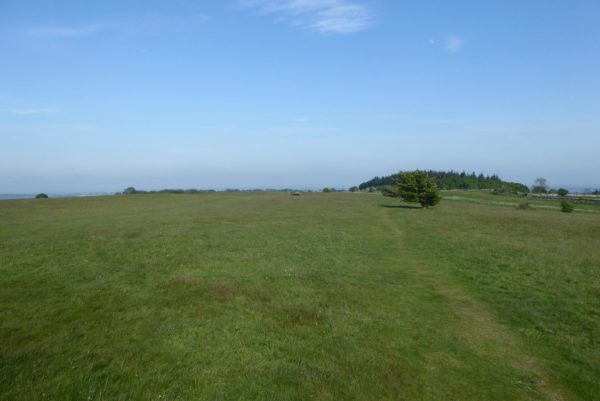 We leave the racecourse via a footpath through the Gallowfields Trading Estate and then follow roads down into the centre of Richmond.  The funfair in the market square looks set up for the evening. It is years since I have been to a funfair, I see nothing here that is likely to entice me to linger! 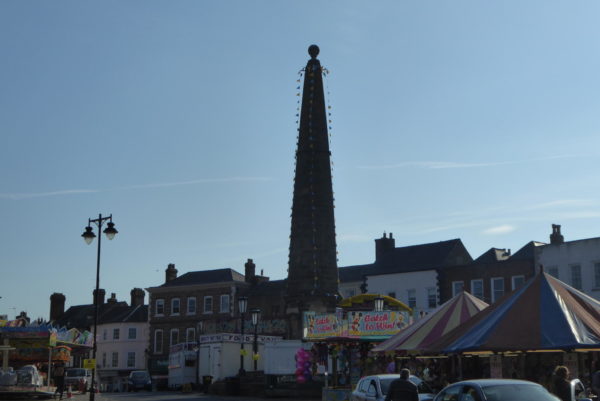 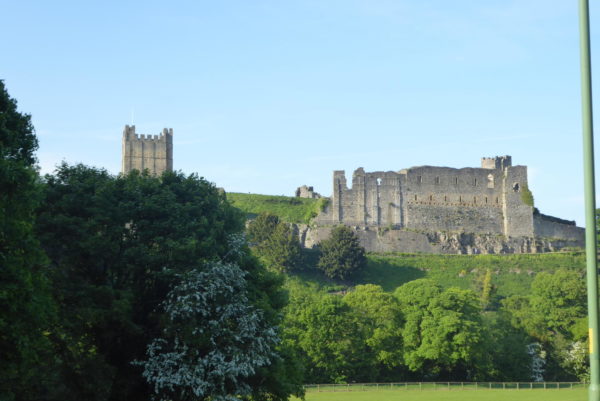 Our route is now very straight forward, we continue along the track, known as Boggy Lane, but due to the dry weather it is not at all boggy. Then on reaching a road turn right to walk towards Hudswell.  Our little wander about has covered close to eight miles, just about right on a warm afternoon.