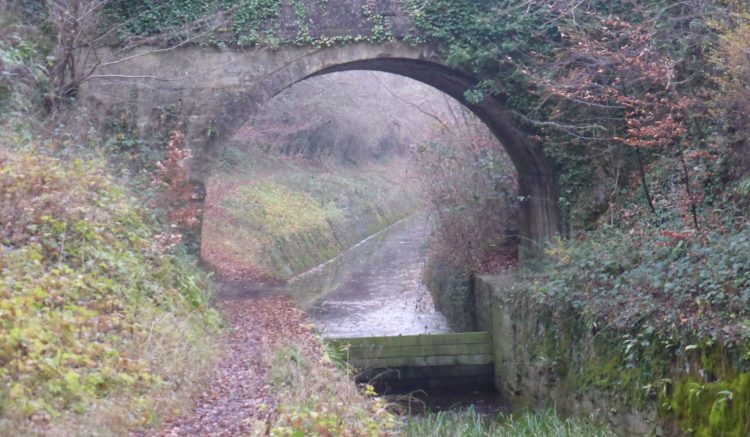 Another very cold night turns into a dry winter’s day, not as sunny as yesterday but nevertheless ideal conditions for heading off for a good jam about. Today it is just the dogs and I, Lynnie has wandered into Cirencester to start (and hopefully finish) the Christmas shopping.

The starting point for my walk is Cirencester Park Caravan Club site where we are staying. I leave the site walking up the lane towards the roundabout that forms the junction of the A419 and A429. My route is alongside the A429, the Fosse Way, this is a busy road and the pavement is narrow so I am grateful when I reach a footpath sign on the right and enter a field.

The footpath forms part of the Monarch’s Way and I follow it as it crosses the playing fields of the Royal Agricultural College, the fine main building of the college is away to the right. 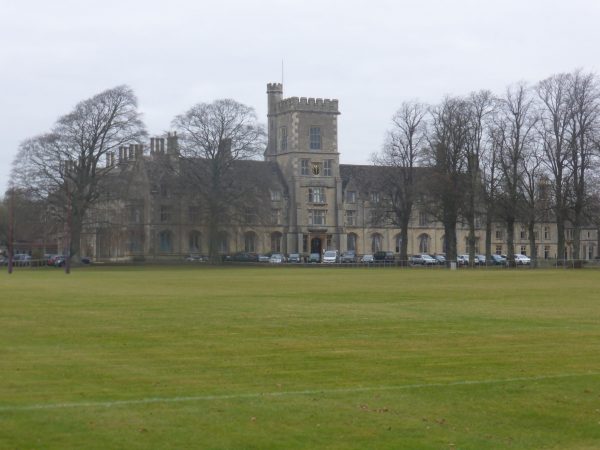 I keep on the Monarchs Way leaving the playing fields to join a track. Apparently the Monarch’s Way gets its name from following the escape route taken by King Charles II in 1651 after his defeat by Oliver Cromwell at the Battle of Worcester. The route is 615 miles long, starting in Worcester and travelling through Stratford upon Avon, Stow on the Wold, Cirencester, Bristol, Yeovil and then through Dorset to continue along the south coast to Brighton before ending at Shoreham-by-the Sea.

Walking alone with the dogs I am striking out at a fair old pace, admiring the scenery as I go and not paying too much attention to the map, consequently I miss the junction where the Monarchs Way turns left. Not to worry because the path I am on takes me past a large old milking parlour before passing the back of Bledisloe House that appears to be undergoing major renovation. Built in 1798 as Coates Manor it was extended in 1921. It was sold in December 2011 for a reported £7m, just a little out of my price bracket at the moment!

The footpath follows the track as it turns left passing the edge of old farm buildings before reaching a lane. I turn left to follow the lane as it sweeps right shortly joining a minor road. Here I turn right and walk along the broad verge until seeing a footpath sign on the left. I now enter a field descending gradually downhill; there is recent evidence of bears so I proceed with caution. After going through a gateway there is increasing evidence of bears but luckily no sign off them. I cross the disused Thames and Severn Canal and continue across another couple of fields.

My planned destination is the spring said to be the source of the River Thames, only one field to go and I will be there. The only problem is that in the field, along with the spring, is a large herd of bears including mothers with their young. I enter the field but it is soon obvious the dogs are perceived as a threat. Whilst keen to see the source of the great river I am not willing to risk life and limb to look at a puddle!

The beauty of jamming about is you can re-plan and find somewhere else to wander. The most obvious route is back to the Thames and Severn Canal to follow the Monarch’s Way towards Sapperton. Fortuitously I have fallen on a cracking walk by accident, I like old industrial heritage and this is a classic.

The Thames and Severn Canal was, as the name suggests, built to link the River Thames to the River Severn via the Stroudwater navigation. Significant engineering challenges had to be overcome before its completion in 1789 including constructing the Sapperton Tunnel.

I join the footpath running along the old towpath and turn left towards Sapperton. It is soon very obvious that since the canal’s abandonment in 1927 it has fallen into serious decline. There are some substantial trees growing from the canal bed and it has been used as a dumping ground for all sorts. 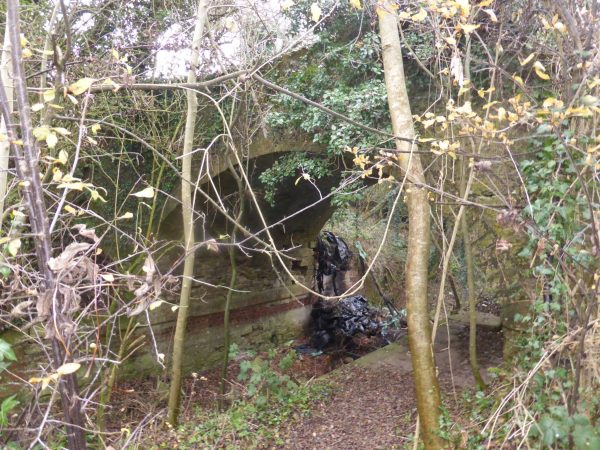 After a while I spot an old, abandoned plough and clamber down for a closer look. It is an old horse drawn two furrow plough and is marked “Cockshutt Brantford, Canada C903”. Later research reveals this plough would have been made by the Cockshutt Plow Company, based in Brantford, Canada. It is a fine bit of machinery and deserves to be in a museum rather than discarded and rusting away in a disused canal bed. 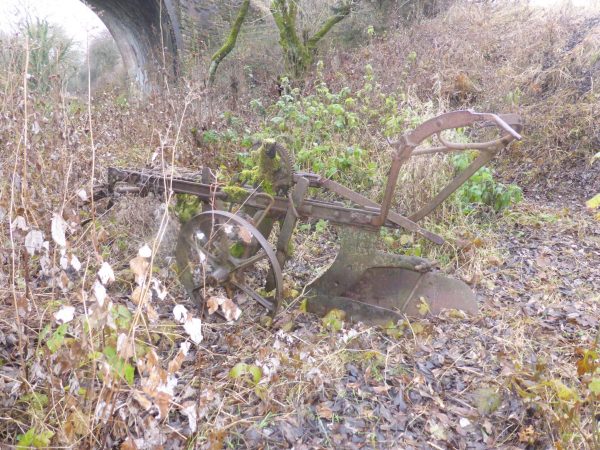 I am beginning to feel thankful to the bears for blocking my route to the source of the Thames this is far more interesting! A little further on I come to an old round building. This is one of five listed circular cottages along the canal. The three storey buildings had storage on the ground floor and living accommodation above. It had an ingenious inverted conical roof used to capture rainwater that ran into an underground cistern and provided domestic water for the house. If renovated it would be a wonderful building. 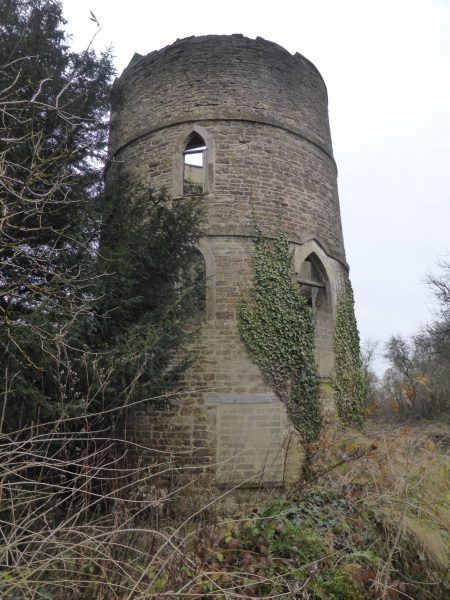 At this point the canal bed has been cleared and it is clear that some restoration work has begun. 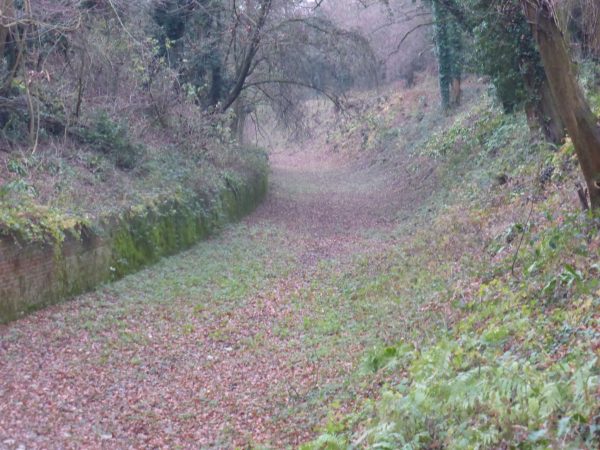 Then around the corner I encounter water in the canal! Obviously not enough for a barge but an indication that the restoration work is making progress. Apparently the Cotswold Canal Trust was formed in 1972 and a survey in 1976 concluded that the Stroudwater Navigation and the Thames and Severn Canal could be restored and made navigable. Clearly the project will be time consuming and costly, but well worth it.

I have arrived at the ornate Sapperton Tunnel, a truly amazing bit of structural engineering, no wonder it is dressed with such a fine façade. The tunnel cuts through the Cotswold stone for a distance of 3,817 yards, over two miles. When opened it was the longest canal tunnel in Britain and it is still the third longest. To build the construction 25 shafts were sunk into the hill, some up to 200 feet deep, some still remain as airshafts. 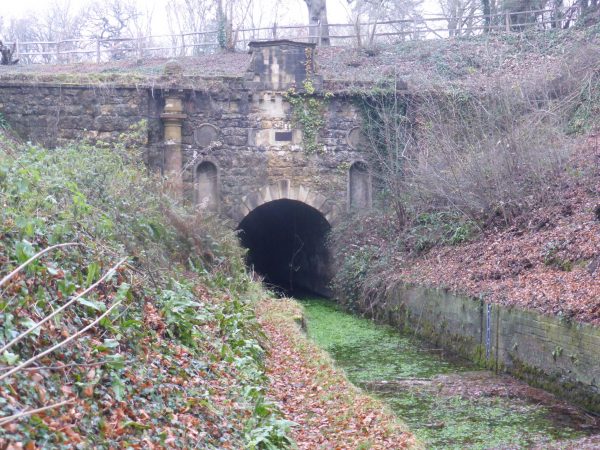 At this point the path climbs away from the canal to reach The Tunnel House Inn, built to house workers constructing the tunnel it is now a country pub. 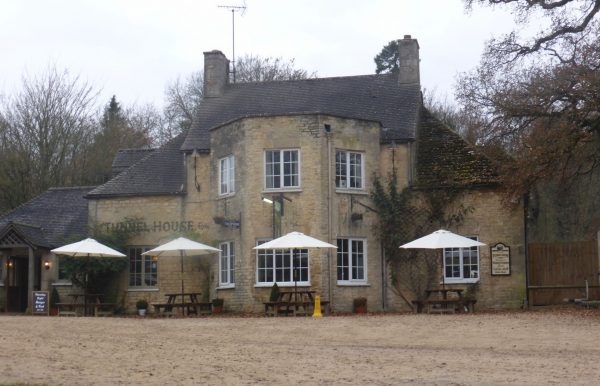 My path turns to the right, leaving the Monarch’s Way, and then I turn almost immediately left with the railway line above to the right. Of course it was the arrival of the railway that signaled the demise of the canal, but thankfully the route of this canal is still free of any major obstruction and restorable if sufficient funds are raised. The path enters woodland and soon turns under the railway line before swinging to the left to climb steadily through the trees. This path forms part of the Macmillan Way, Wysis Way and T & S Way.

Emerging from the woodland I cross a field before cautiously crossing the A419 to go through another field to a minor road. Here I turn left towards Sapperton, at a crossroads I take a right turn and a few hundred yards further on turn left to walk along the road into the village.

Sapperton is a village that if you were dropped into from outer space you would immediately recognise as being in the Cotswolds. I wander through the village to St Kenelm’s church. We have come across numerous churches on our travels but I don’t think we have visited one dedicated to St Kenelm. I sense a winter’s afternoon creating a spreadsheet of churches encountered on our travels! 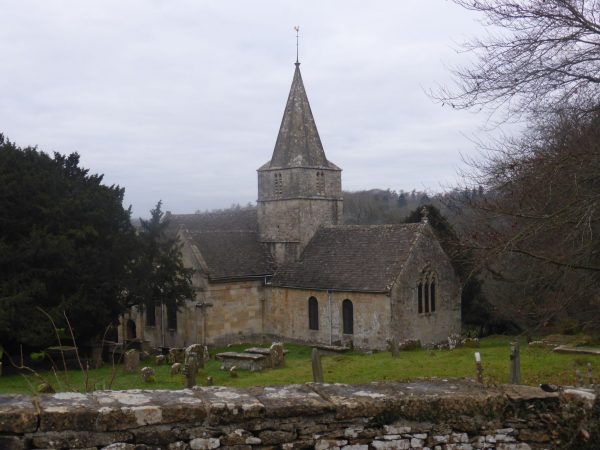 Apparently St Kenelm was an Anglo-Saxon saint venerated throughout medieval England. Legend has it that he was a boy king, a member of the royal family of Mercia. Reportedly he dreamt he was about to be murdered, this turned into reality with a relative performing the evil deed. His body was concealed and only found after miraculous intervention when light shone through the trees onto the spot where he was buried. I find it odd that folk blessed with wonderful powers to foresee their own demise do not have the capacity to put in place a plan to ensure their survival.

I leave Sapperton following the Macmillan Way heading north from the junction by the church. This is a muddy path well used by horses so it is slow, sticky going. At a crossing of paths I turn right towards Parkcorner Farm. Passing through the farmyard I reach Park Corner and take Overley Road directly opposite following this towards Daglingworth. 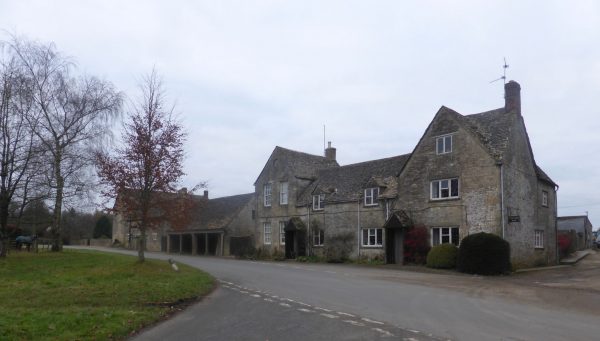 It is my intention to pick up one of the many paths that lead off this road into Cirencester Park and then back to the caravan site. However, each path I reach has a sign saying that dogs are not allowed. These are permitted paths and not public footpaths so I have to adhere to the notice and walk the two miles into Daglingworth. It is a pleasant stroll along a quiet country road.

As I enter the village I seek advice from a local dog walker. He suggests I follow the footpaths to the estate polo ground and then walk from there towards Cirencester. So I walk into the village and take the footpath leading past the church, after walking along the edge of a field I join a track and turn right walking up the hill reaching the polo grounds in just over a mile.

At the advised route through the estate yet another sign forbidding dogs greets me . It is getting dusky and whilst it is tempting to take this path I decide it would be more sensible to stick to footpaths so take a path on my left heading back downhill to the village of Stratton. Before reaching the village I take a footpath on the right skirting the village and eventually reaching the A435. I turn right along the pavement back into Cirencester to meet Lynnie. By this time it is dark and I am glad of the street lighting!

I have had a wonderful hike covering fifteen miles, further than I had originally intended, it would have been a good deal shorter but for the ban on dogs through the park. However, I can rest easy knowing I have abided by the rules! 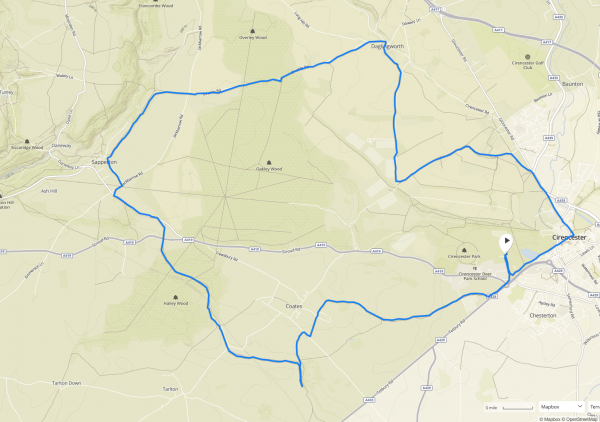