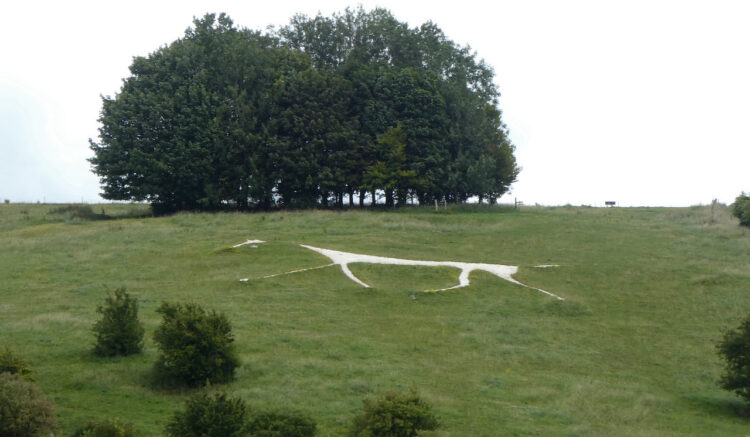 Earlier in the year my friend Mandy suggested we “bag” all eight of the Wiltshire White Horses during 2020.  Our plans have been a bit hampered by the Covid-19 lockdown.  So far we have visited the chalk carvings at Cherhill, Devizes and Pewsey so we have some catching up to do.

The starting point for our walk is the long stay pay and display car park in George Lane, Marlborough (SN8 4BX).  From the car park we cross the River Kennet and walk into the town along Hilliers Yard and then turn left along the High Street.  After passing St Peter’s Church we turn right and follow the pavement besides the A4, Bath Road, to walk besides Marlborough College.  After passing the main entrance to the college we take a footpath on the left which crosses the River Kennet to reach St George’s Church.

From the church we continue on the footpath heading south to reach Preshute Lane where we turn right and follow the lane for half a mile to reach Manton where we turn right into Bridge Street.  After crossing the River Kennet we take a footpath on the right leading through trees to the A4 which we cross at traffic lights and the take a footpath opposite which heads north along the White Horse Trail.

After passing some houses we are soon heading north through open countryside.

At a junction of paths we turn right leaving the White Horse Trail.  There are trees to our right and we soon pass Barton Copse, nearing farm buildings we join a driveway to Manton House Farm and follow this to a road which we cross.

Now we turn left and follow a path running inside the hedge line towards the Old Eagle.

We briefly join the road to pass Old Eagle Cottages, these cottages stood near the Eagle pub, which according to the local history group was originally called the St John’s Arms.  In 1795 this pub stood on the Marlborough to Broad Hinton turnpike and was owned by Henry St. John of Rockley House.  His coat of arms included an eagle with wings spread so the thatched inn became known as the Old Eagle.  It closed as a pub in the mid 19th century and became a dwelling, but in January 1948 fire destroyed the property and it was never rebuilt.

By the cottages we take a track that heads north onto the downs where there are a network of gallops for racehorses.

As we reach the top of the downs we leave the track to take a footpath on the right which heads to the site of a cemetery.  This seems an odd place to locate a cemetery so we look to see if we can find why it is located here. It is a small private cemetery where members of the Hartigan, Laye and Louden families are buried, apparently they were all associated with the nearby Bonita Racing Stables.

From the cemetery we head north to cross gallops and join a track where we turn left and at a junction of tracks we follow a track, still heading north besides the gallops.

This is the first time I have been on these downs and there are some stunning views.

Our route is now very straightforward we stay on this track for two miles heading towards Upper Herdwick Farm.  Along the way we pass a milestone at Four Mile Clump. Sadly the inscription on the stone has eroded.  The Historic England website dates the stone as circa 1762 when this track was the route of the Swindon – Marlborough turnpike.

After passing Upper Herdswick Farm we follow a footpath on the left, we are now on the route of the Ridgeway long distance path, we head towards the car park for Barbury Castle.  Close to the car park area there are benches enjoying wide ranging views they provide an ideal spot to stop for lunch.

Resuming our walk we follow the Ridgeway path heading west to reach the Iron Age Hillfort of Barbury Castle.

The Ridgeway runs through the castle and then descends to a minor road which we cross and follow the Ridgeway along the track for two and a quarter miles to reach a minor road.

We cross to go through a gate on the right that leads to the Hackpen White Horse.

It is difficult to get a good view of the horse from the hillside so we descend to cross a stile and walk along the road for a few hundred yards to get a better picture.  The origins of this chalk carving is unclear, it is thought to have been cut in 1838 to mark the coronation of Queen Victoria.

From the road we make the stiff ascent back up the hill and re-join the Ridgeway.  Soon in a field on our left we pass the Shoulder of Mutton Ordnance Survey Trig point.  It was my intention to bag this trig, but there are crops in the field, so I will have to return later in the year after harvest.  The top of the trig is just visible from the side of the track, but I don’t count that as a “bag”. Our route continues along the Ridgeway, with fine views.

after a mile we reach the Berwick Bassett Down Dewpond.  At one time when sheep farming was the main industry on the downs there would have been numerous dewponds dating from the 19th and early 20th centuries. Due to the nature of the chalk downland, ponds were dug and lined with clay so they could capture and retain rainwater.  The average rainfall here is between 30 and 40 inches, thereby providing a good water source for livestock.  Over the years the ponds have fallen into disrepair with a consequent impact on other wildlife dependant upon them, so since 2012 a local group have been restoring the ponds.

A mile further along the Ridgeway we reach a gate on our left leading to open access land which is littered with Sarsen Stones, known as Grey Wethers.  Apparently they get the name due to their likeness to sheep when viewed at a distance, a wether being an old term for a neutered ram.

We cross the access land in a south easterly direction towards the edge of Delling Copse and then cross another access area known as Dellling.  By a farmhouse we turn right and pick up a footpath across farm land to a junction of paths where we turn left and head east towards Wroughton Copse. As we near gallops we turn right and head south across Fyfield Down.

The path is unclear but we head towards a copse and then onto access land.  Here we reach a track and turn left heading south east.

On leaving the access land we follow a path which soon leads us by Devil’s Den, apparently the remaining stones of a Neolithic passage burial chamber that was 230 feet long.  It is believed the stones were repositioned in 1920 and they make an impressive sight.

Our route is now along a track through Clatford Bottom towards the A4.

After crossing the A4 we continue south to pass Clatford Hall which sits behind a high hedge giving only a brief glimpse through high gates.  Parts of the Hall date from the 16th century with further work in the mid 19th century.  The Historic England website suggests the site was probably erected on the site of the priory of St Victoire en Caux.

At a junction of paths we turn left and head east to soon join minor a road and then go straight over at a crossroads to join Manton Road, we follow this into the village passing the village school with it’s elaborate guttering system.

Soon after we pass the Oddfellows Arms and then turn right into Preshute Lane.

We now retrace our steps along Preshute Lane to reach the junction to the path to St George’s church we turn right following a footpath past the sports ground of Marlborough College.  On reaching a junction with the Wansdyke Path we turn left and walk along the top of Granham Hill.  There are fine views across Marlborough from here.

As we near the A345 we follow a path downhill to reach a gate where we turn left and walk besides the River Kennet and soon get a view of the Marlborough White Horse on the hill we have just walked across.  This horse was first cut in 1804 by pupils of a school known as Mr Greasley’s Academy.  After Greasley died in 1830 the school closed and the horse was neglected.  But in 1860 it was restored.  Apparently the last restoration was undertaken in 2001 and the horse is no longer clear as a chalk figure, but can just about be identified.

After getting a view of the White Horse we turn around and follow the path besides the river back to the A345 which we cross and then walk along George Lane and then turn into Figgins Lane to return to our starting point in the car park.

Our walk has clocked up almost 19 miles and has covered some wonderful sections of Wiltshire I have not previously visited.

You can view this 18.7 mile walk on OS Maps and download the GPX File Here (Subscription to OS Maps Required)