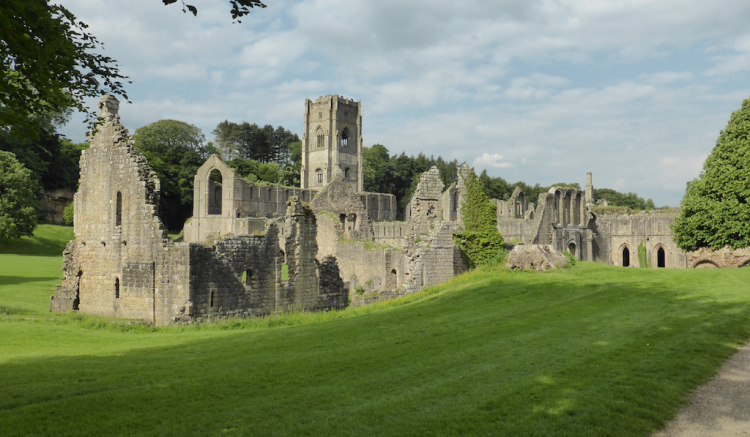 I first brought Lynnie to the Yorkshire Dales in 1982 and one of the places we visited then was Fountains Abbey. It is a wonderful place and was also beloved by my mother. It is very close to West Lees Farm CL and is top of the list of places to visit whilst in the area.

Previously we parked in the main car park close to the Abbey and then wandered around the grounds. Today we are combining a visit to the Abbey with a decent walk. Our starting point is from the centre of Ripon where it is refreshingly cheap to park for the day.

We start by taking a brief wander around Ripon to get our bearings and then leave the market square by Westgate, soon turning left into High Skellgate and at the crossroads continuing straight on to Low Skellgate. Just before the bridge we fork right into Borrage Lane. We soon spot a plaque to our right marking a house that the First World War Poet, Wilfred Owens (1893-1918) had lived in from March to June 1918 whilst stationed at Ripon Army Camp. Owens was killed in action on 4 November 1918 during the crossing of the Sambre-Oise Canal; this was exactly a week before the signing of the armistice that ended the war.

At the end of the lane, just as the road sweeps to the right we enter a park and follow a footpath besides the River Laver. This soon leads to a pavement besides a road (B6265), which we follow out of Ripon picking up a footpath on the left soon after the entrance to the River Laver Holiday Park. 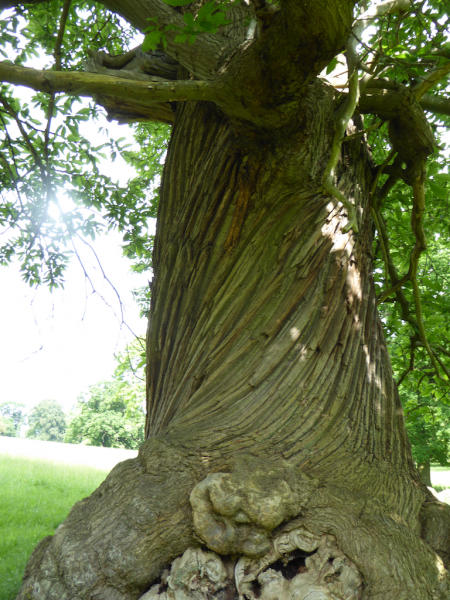 This well-marked path leads us to the attractive hamlet of Studley Roger, we carry straight on through to enter Studley Deer Park and then follow the path through the park until it joins the tarmac lane leading up to St Mary’s Church. 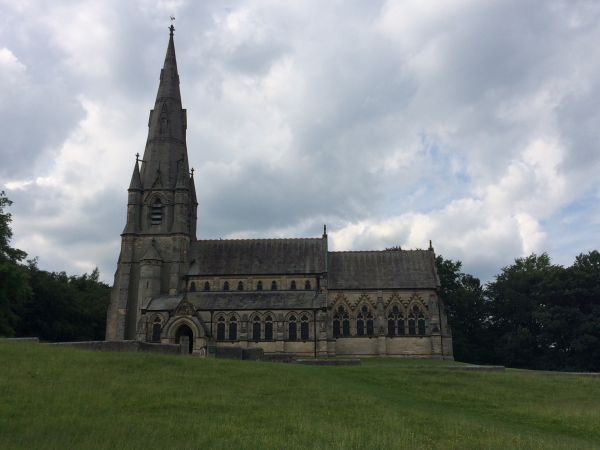 This fine gothic church was designed by William Burges and work commenced in 1871 with the church being consecrated in 1878. I wait on a bench in the deer park whilst Lynnie views its ornate interior. 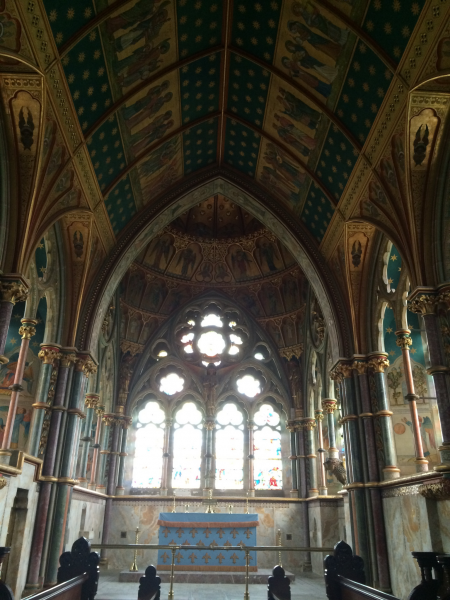 To the west of the church is an obelisk, constructed c1805, prior to the building of the church. It commemorates Elizabeth Aislabie the daughter of William Aislabie who had carried on his father’s work in creating the water features at Studley Royal and, who like his father was the member of parliament for Ripon. Prior to the construction of the church there were fine views of Ripon Cathedral from the obelisk. 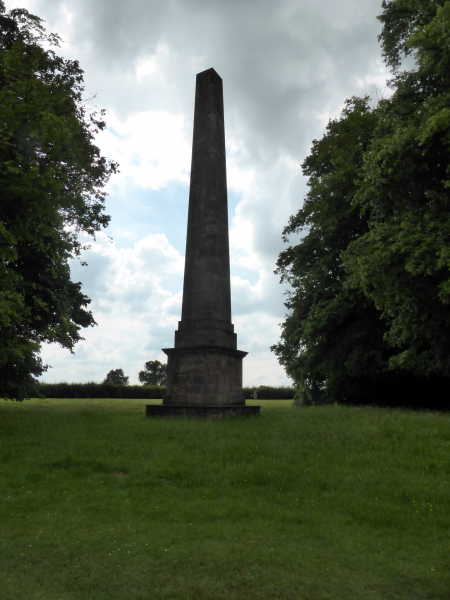 We head downhill towards the lake and Lynnie soon spots a fine view, like a greyhound after a hare she is across the ground to reach the ice cream van. 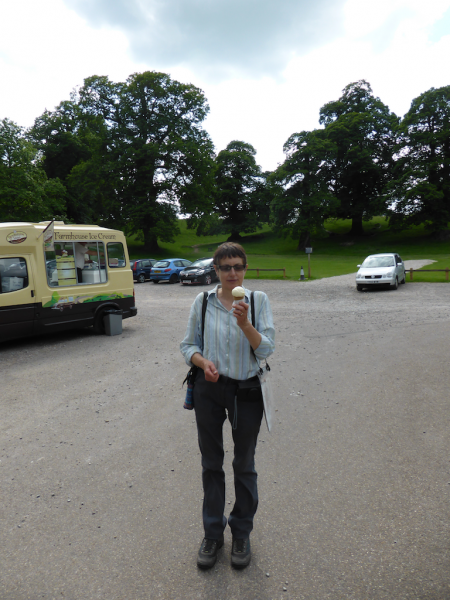 Once Lynnie has finished her ice cream (not shared with the dogs) we enter the grounds of Fountains Abbey. It is over thirty years since we were last here and whilst I remember the magnificent remains of the Abbey I do not recall the serenity of the place. 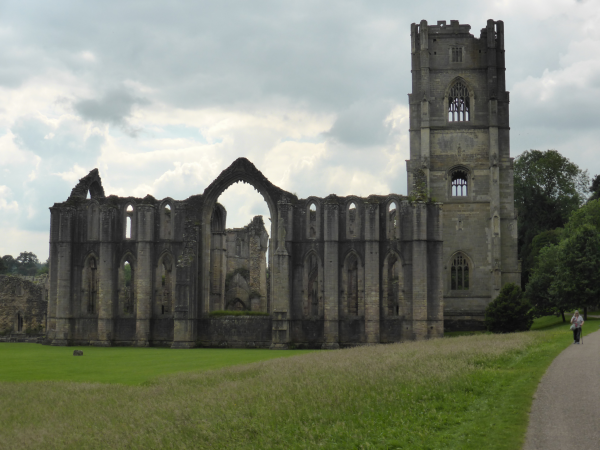 There are other folk about, but there is a leisurely, peaceful feel as we walk through the grounds. The first sight of the Abbey is breathtaking. 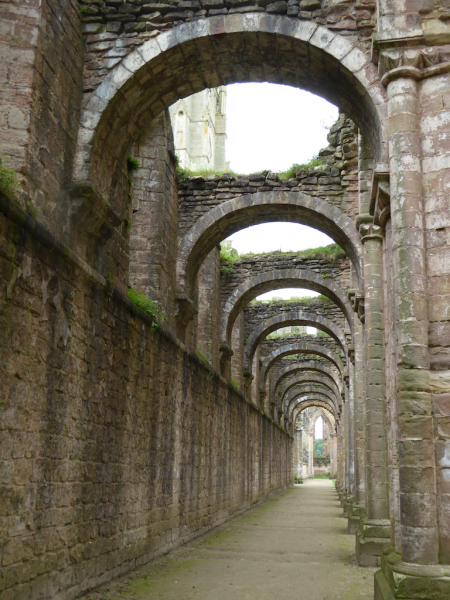 It is said to be one of the best-preserved Cistercian monasteries in England. It was founded in 1132 and operated for 400 years until 1539 when Henry VIII ordered the dissolution of the monasteries. 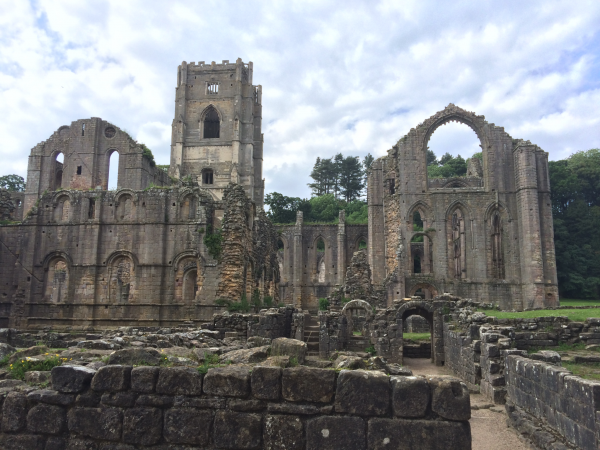 Every way you look there are stunning views including the abbey nave, 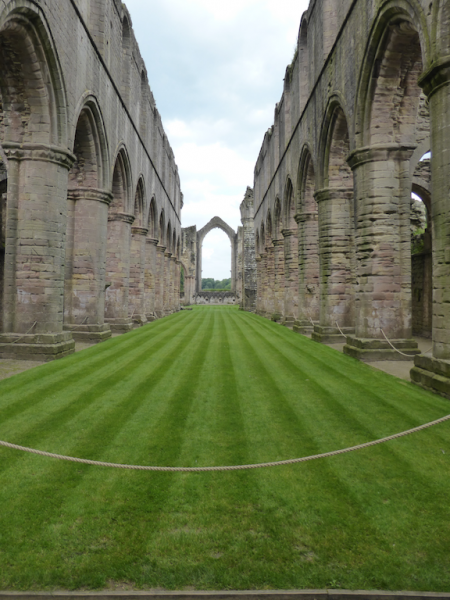 and the vaulted cellarium used for food storage. 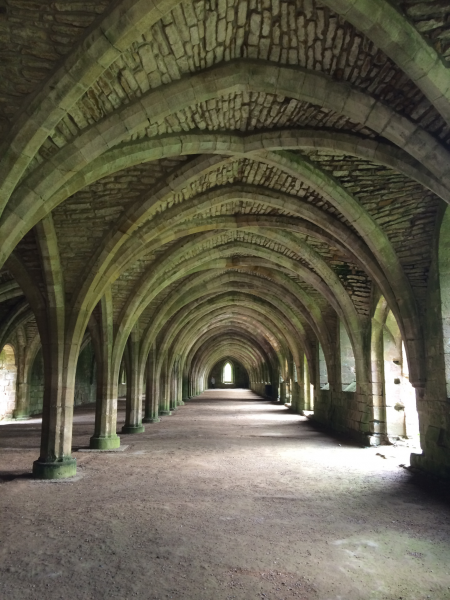 We wander around exploring and find the whole place fascinating. I am sure that almost thirty-five years ago my attention and thoughts were distracted by Lynnie and I doubt I spent so long looking at the remains of the Abbey! 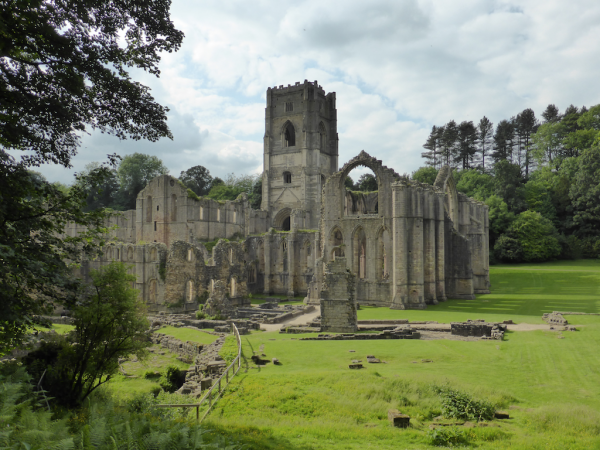 We briefly look at the old mill before wandering back through the grounds, we decide to climb up to the Temple of Fame, the origins of which are not entirely clear. It was rebuilt in the 1970s; we have a picture in an album of Lynnie here in 1982 so she poses for the same shot. 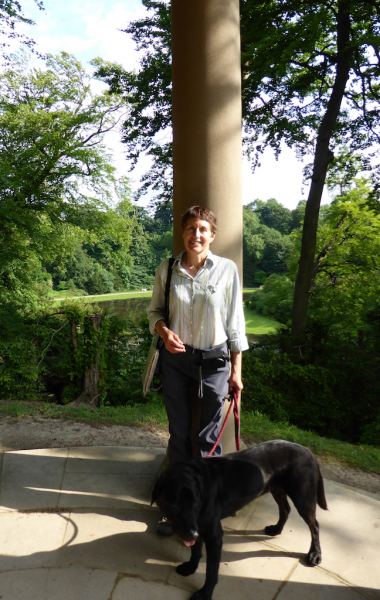 We then head on to the Octagon Tower originally designed by John Aislabie and built in the 1730s. It was restored in the late 1970s and commands a fine view over the water garden. 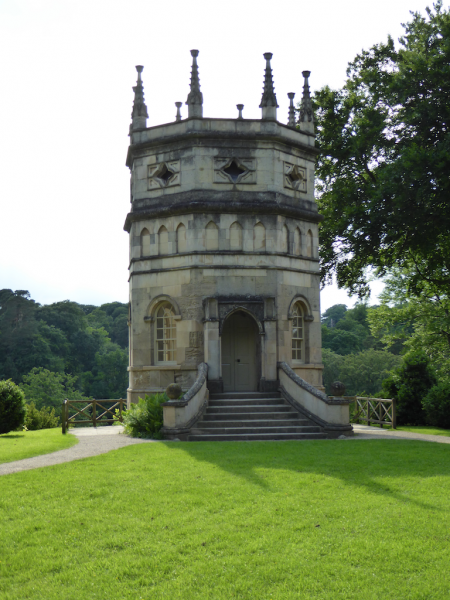 We continue through the grounds eventually leaving by the gate close to the lake where we follow the path around the edge of the lake and cross at the weir. At a fork in the path we keep left to follow the route alongside the dried up bed of the River Skell. 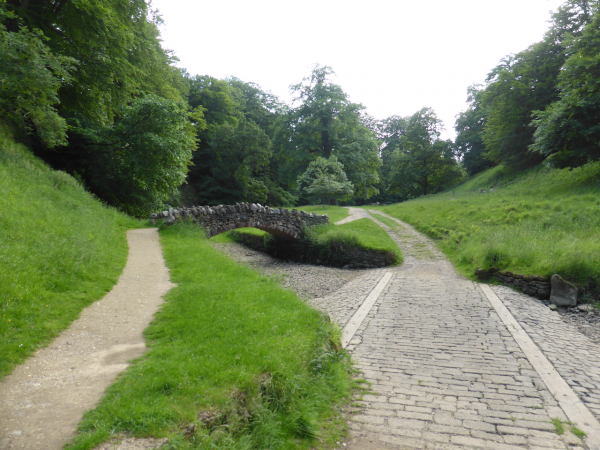 We stop to observe a small herd of fallow deer on the hillside by the river. They must be used to dogs because they show no concern at being watched from about fifty yards away. Either that or they spot the dogs are on their leads and are unlikely to pose a threat. 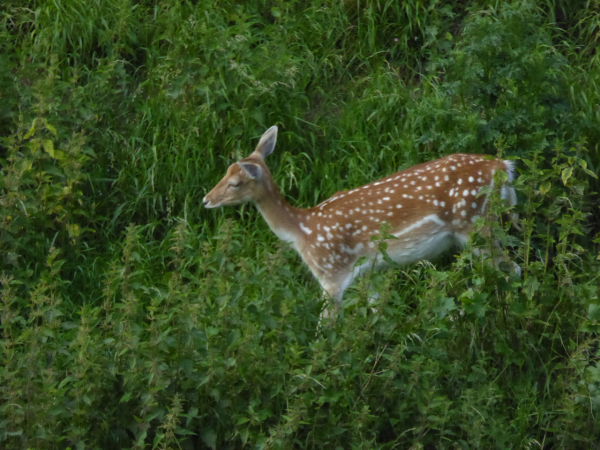 At a footbridge on the right we cross the river to follow the path as it climbs steeply uphill and then at the summit turns left to enter a field. This is occupied by bears, but they are mature dairy cattle and show no interest in the dogs. After following the path across fields we soon reach a farm track and turn left to follow this down into the outskirts of Ripon and from here our sense of direction guides us back to the town centre.

Along the way I am struck by the fine building of T&R Williamson sitting besides the River Skell. The varnish and enamel works were established in 1775 when, according to the company’s website, Thomas and Robert Williamson secured their first recipe from a French refugee who having found his way to Ripon sought hospitality with the Williamsons. In exchange he gave up his secret recipe and that started what the company believes to be the oldest family operated paint and varnish manufacturing business in the world. Their enamel paint was, and still is, used across a wide range of industry including a number of railways worldwide. 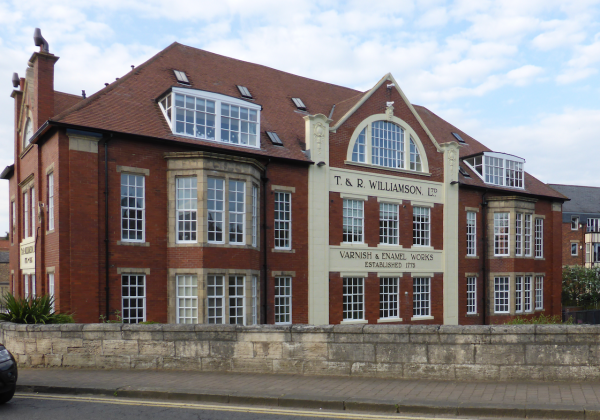 Back in Ripon’s market square Lynnie pops into a local supermarket to get some supplies whilst I look at the old cabman’s shelter. The Ripon Civic Society plaque states it is a rare shelter built by Boulton and Paul of Norwich and provided for cabmen in Ripon in 1911 by a legacy of £200 from Sarah Carter, a former Mayor’s daughter. 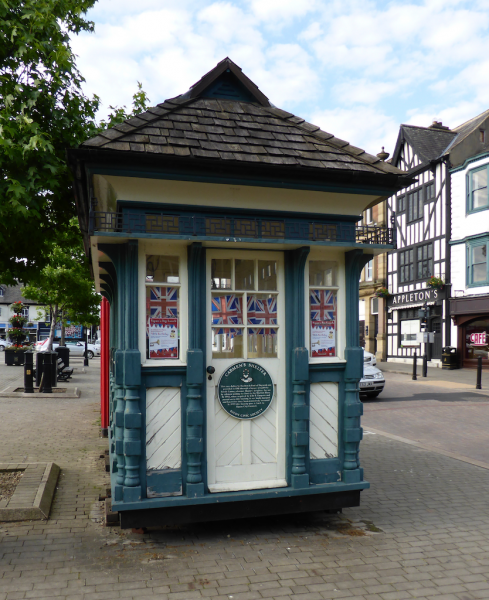 Our wonderful, wander down memory lane has covered just over ten and a half miles. Along the way there has been an awful lot of reminiscing. I am not sure that either of us will be up to doing it again in another thirty years time, so we had better not leave it so long until the next time! 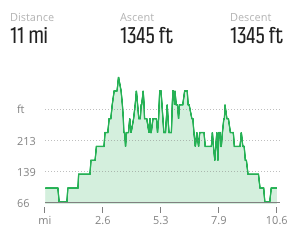