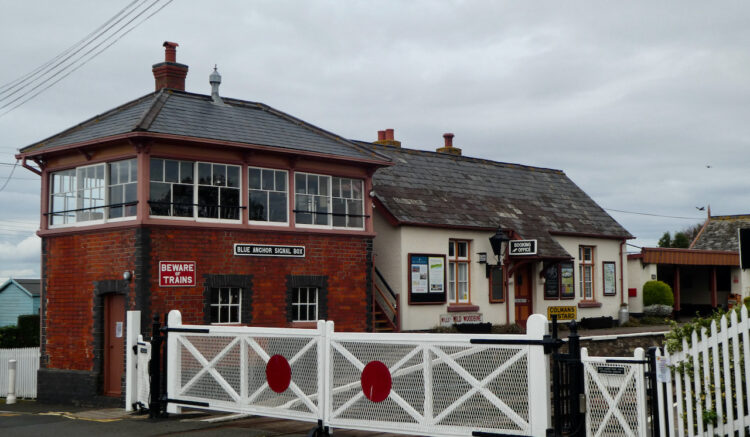 After yesterday’s trip out in the car to Countisbury I have decided that today I will walk from the caravan.  I have stayed on this site at Minehead a few times now and done a number of walks from here, but looking at the map last night I realised there were paths from Alcombe to Dunster I had not yet walked.

Leaving the caravan site I turn right and walk besides the A39 to the roundabout by the parade of shops.  I stay with the A39 and continue for just over a hundred yards before turning right into Church Street.  I soon reach the modern St Michael the Archangel Church which was built in 1903.

I continue up Church Street to reach a crossroads close to the Brittania pub, here I turn right into Manor Road.

Despite being so close to the caravan site I have not been here before and it is a delightful area.  Once a village in its own right it has now been subsumed into the rest of Minehead, but it retains the feel of a village.

I stay with the lane as it goes through the village and then becomes a track leading into woods.

At a junction of paths I go left and head uphill on a path through the trees.

On reaching a junction of footpaths with a way-marker I go left following the route towards Dunster.

This clear path was apparently the medieval route between Dunster and Alcombe, it goes in a south easterly direction and crosses a couple of other paths to reach a third crossing of paths.  Here I go left on a path heading towards Dunster.  I like walking tracks that have been used for centuries, it is amazing to think of the people that have trod this path in earlier times and the lives they led.

As I go along I get fine views across the Bristol Channel and can see the coastal path route I will be walking later on my return to Minehead.

The path descends to a gate which I go through and soon pass St Leonard’s Well.  This is a medieval Holy Well which is now housed in a 16th century well house.   It is thought it supplied water to a Benedictine priory which was dissolved in 1539 and was located a bit further down this lane.

Staying with the lane I continue to head steadily downhill towards Dunster.  On reaching a junction with a minor road I turn left and then within a few yards turn right at the Butter Cross.  This trading post dates from the late 14th century and once stood in the High Street in Dunster.  It was the centre for a market that traded local produce.  It was originally taller and although the exact date of moving to this site is not known it is thought to have been in the late 1700’s or early 1800’s.

I follow the path, passing a community orchard.  These local community initiatives are great ideas, not only growing produce, but also providing a community hub, thereby, tackling the issues related to social isolation.

At a minor road I continue straight on and follow this lane into Dunster arriving in the centre of the village close to the Yarn Market.  My route is to the right, but I turn left and walk the short distance  to pick up a pasty at the Dunster Estate Ice Cream Shop.  I am not usually a fan of pasties but sampled one here a couple of years ago and it was excellent so Crosby and I share one for our lunch.

Lunch consumed we resume our walk to head back into the village and pass the octagonal Yarn Market cross. This was originally built around 1609 by the Lutterall family, who were major landowners in the area, including Dunster Castle.  As the name suggests the Yarn Market was predominantly used for trading cloth and wool. At the time Dunster was a major centre in the wool trade.

I stay with the road through the village to reach St George’s Church.  This church originally dating from the 11th century also served as the church for the monks of the nearby Priory.  It underwent major restoration between 1875 and 1877 and is an impressive building.

Keeping by the road I continue through the village to reach The Foresters Arms where I turn left into Park Street and follow this lane to reach the Gallox Bridge.  This grade 1 listed medieval packhorse bridge crosses the River Avill, at one time this was the main route into Dunster from the south. Its name derived from its proximity to the village gallows, which stood on nearby Gallox Hill.

I cross the bridge and head towards the woods in front of me and then at a junction of paths take the path way-marked to Aller Hill.

This path soon reaches a gate and then goes steeply uphill through the trees.

It is a long steady ascent and I stay with the main path heading south towards Withycombe Hill gate.

On reaching the gate I go through and turn left to follow a cracking walled path, Park Lane, as it heads downhill towards Carhampton Gate.

At a junction of paths at Carhampton Gate I turn right and stay with the lane to head into the village of Carhampton where I turn left down the High Street to reach the A39. Here I turn right and cross the road to continue along the pavement to the church of St John the Baptist.  The current church was built in the 1860’s but still retains many of its original features.  A few years ago Lynnie and I popped inside to look at the stunning painted rood screen.

I continue besides the A39 to reach a crossroads where I turn left onto the B3191 signposted to Blue Anchor.  My route now follows this road for a mile to reach Blue Anchor, there is no pavement so I am a bit wary of the occasional vehicle, but fortunately it is not too busy today.  On reaching Blue Anchor I cross the railway line of the West Somerset Railway and pass the signal box.  This station was added to the line in the 1870’s and is now a popular stop on this heritage railway line.

Before heading back to Minehead I decide to take a walk along the seafront and see if there is any sign of the Blue Anchor pub re-opening.  It is also a pleasant walk  besides the high sea defences with good views of the coastline.

The Blue Anchor pub looks as if it has become a casualty of the sea erosion and is now closed permanently, or at least until Somerset Council can come up with a plan to stabilise the cliff.  A number of options have been under consideration, some leaving the pub to the mercy of the sea.  It is always a pity when pubs close down, especially if like this one they are in a cracking location.  Hopefully a solution can be found to save it.

I now head back along the sea wall to reach a World War II pillbox and pass this on the beach to join the footpath heading towards Minehead.

After a section on the pebbles the route becomes a tarmac path and I stay with this to reach a car park at Dunster Beach. After going through the  car parking area I pass an estate of holiday chalets and reach the end of the Minehead and West Somerset golf course.

The path now skirts another World War II pillbox before continuing alongside the golf course.

Despite walking this route before I am surprised how long it takes to get from  Blue Anchor to Minehead.  No matter how long you walk for Butlins holiday camp does not seem to get any closer.  Eventually I reach the club house of the golf club and join the path besides the sea wall.  The light has been fading fast and I am treated to a cracking sunset.

From the sea wall I head along the Avenue and then turn left to follow the roads back to the caravan site.  My walk has covered thirteen and a half miles and has been a cracking wander made even more enjoyable with the stop for a good pasty.