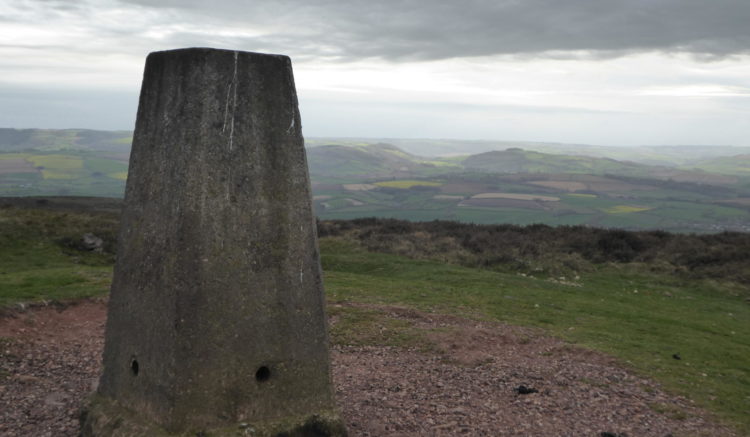 After three weeks at home I have itchy feet and we agree that I should head off for a few days walking with Crosby whilst Lynnie spends some time in the garden and Dexter has some respite from serious walking. A favourite location of mine is the Quantock Hills and Exmoor so I head off to the Cadeside Caravan and Motorhome Club site just outside of Wellington.

On my own it takes a bit longer to set up, normally when we arrive on a site I do everything externally whilst Lynnie sorts the inside of the van.  Fortunately it does not take too long to be pitched up and I am soon in the car heading for the Quantock Hills.  I have been walking these hills for over twenty-five years and when we lived in Taunton I was up here a couple of times a week, so they are very familiar to me and it almost feels like coming home as I park the car at Dead Woman’s Ditch.

The origins of the ditch are thought to be Iron Age, possibly a fortification linked with Dowsborough Hillfort. How it came by this gruesome name is unclear, some say that it relates to the fact that local charcoal burner John Walford dumped the body of his wife in the ditch in 1789, he was later hung at a local spot now named Walford’s Gibbet. Others say there is evidence that it had the name prior to this. More recently, in 1987, the body of Bristol estate agent Shirley Banks was dumped near the ditch by her murderer John Cannan. So this spot does have a dark past.

I leave the car park taking the narrow road opposite and follow it down until we reach the footpath to Dowsborough Hillfort. There are a couple of options to the hillfort.  The slightly easier route takes a left and traverses the hill, I have regularly walked that route, but today I take the path that goes straight ahead, this is a short sharp steep climb I am keen to give the legs a workout in preparation for walking in the Yorkshire Dales in May. 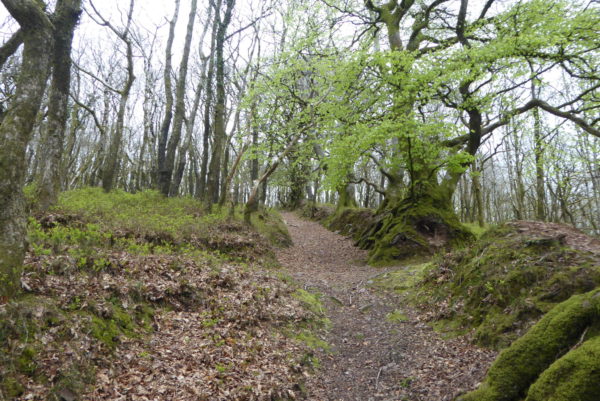 At the top of the climb I turn left and walk along the path to Dowsborough Hillfort which stands at a height of 340 metres and has splendid views over the Bristol Channel and to the East, over the valley of the River Parrett. Since I was last here more work has been done on the construction of the Hinkley Point C nuclear power station. 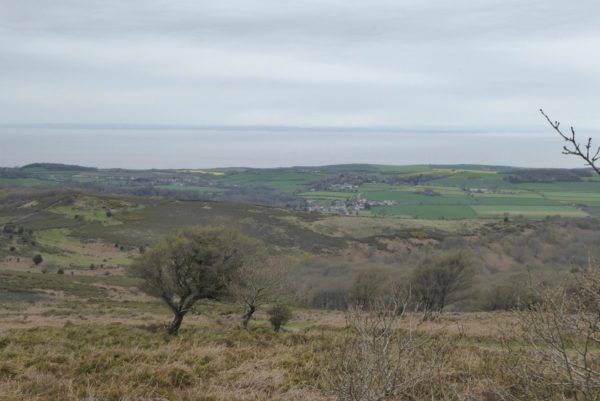 My route from here is north towards Woodands Hill which I head over carrying straight on as the path descends towards the outskirts of Holford. 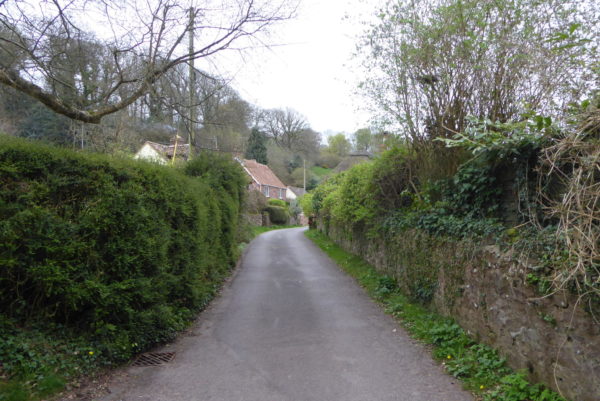 On reaching the tarmac lane I turn left into the village.  In the village I turn right and then left to walk past the Bowling Green; soon after arriving at the Dog Pound, where local stray dogs used to be housed. 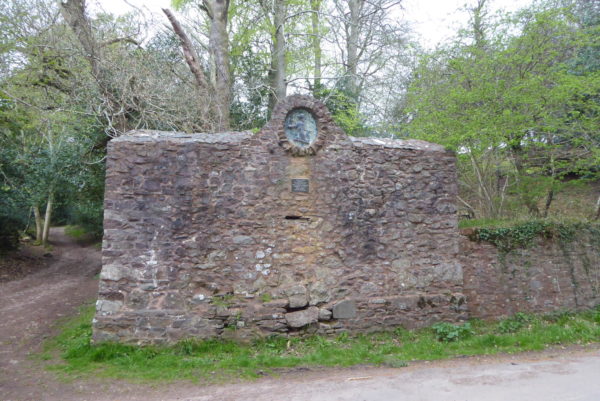 Apparently local hunting dogs were kept on the Alfoxton Estate, cared for by the huntsman.  The meat for the hounds was hung in trees attracting local stray dogs who unsettled the hounds. One night the huntsman was woken by the sound of dogs and went to investigate, unfortunately he did not put on his normal hunting garments and as a result was attacked and killed by his own dogs. To prevent strays causing a repeat occurrence the dog pound was built.

At the pound I take a broad, uphill track, it is a long gradual climb, which continues after passing through a gate.  At a junction of tracks I take a turning to the left to head up a ferocious hill.  Relatively short in distance but seriously steep.  This is great training for those Yorkshire peaks

The steepest section completed I carry on uphill stopping briefly at the plantation of firs planted to commemorate those from Holford and Kilve that fought in World Wars I and II. 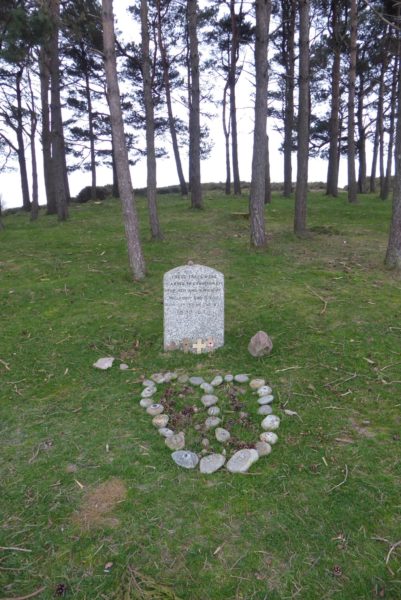 My route continues upwards and at the top of the hill I see the trig point in the distance in front of us on Beacon Hill.  I know from many previous visits that the views from there are stunning so I head off across the moor. 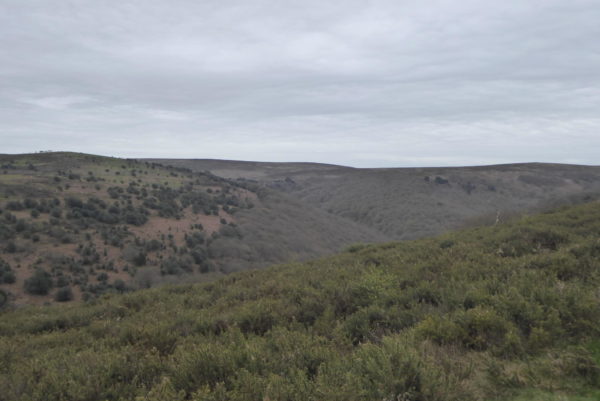 A few years ago Lynnie and I walked along the ridge from Dead Woman’s Ditch to Beacon Hill, it was so windy that we struggled to stay on our feet. Today I can enjoy the panoramic view. 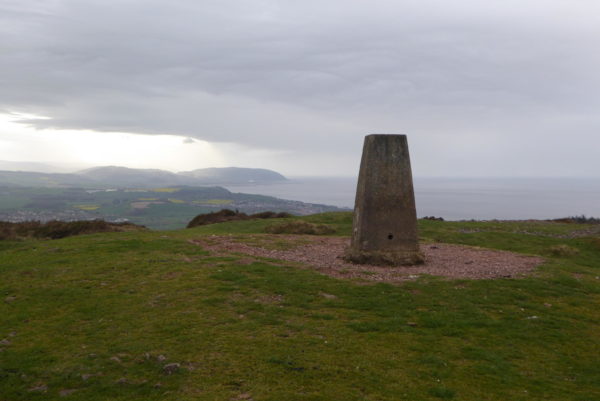 I retrace my steps back along the track and then turn right to Bicknoller Post and follow the ridge to Halsway Post where I take the left fork leading the mile and a half back to Dead Woman’s Ditch. 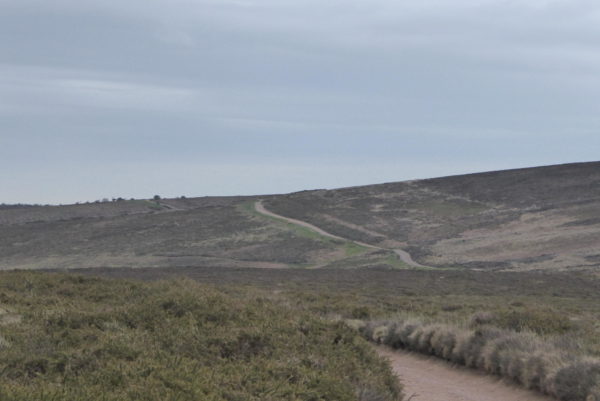 My route has covered seven and a half miles; it has been a stunning evening. I never tire of walking in these hills!