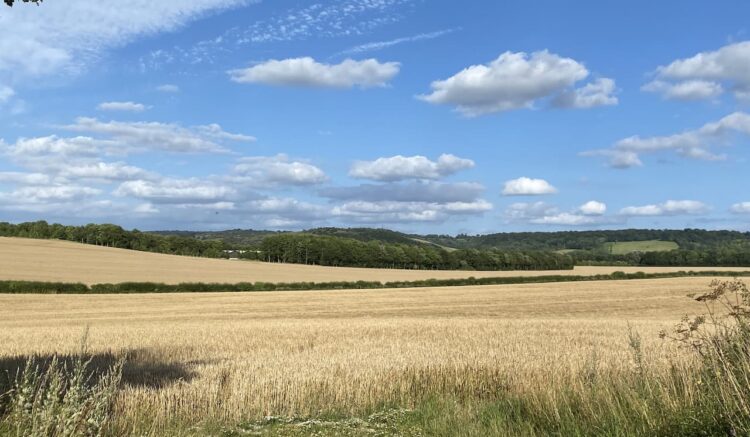 Having spent over a week walking from Cholsey Grange CL today the car is moving for the first time since we arrived.  The starting point for our walk is the attractive Oxfordshire village of Ewelme which is about ten miles from Ibstone.

We park in the car park besides the village playing field and then start our walk by heading into the village, soon reaching the fine building that is the primary school.  The school was originally founded in 1437 by the Duchess of Suffolk, Alice Chaucer (the granddaughter of Geoffrey Chaucer).  The medieval buildings are still used today as classrooms.

We continue into the village and pass the village pond and turn right to pass the Village Shop, which is also a tea room.

Walking up the road we reach the village pound, this is where stray animals would have been penned until their owners could be identified.  These days you rarely see stock wandering freely, but when I was a nipper it was a frequent occurrence in my home village.  I recall waking in the middle of the night to find a herd of heifers in the back garden and on another occasion it was a flock of sheep.

Opposite the pound is a building which was once the stable of Nancy the Warhorse.  A notice board explains the story of how Nancy was Sergeant Thomas Champion Orpwood’s mount with the Queen’s Own Oxfordshire Hussars in France  during World War I.  After the war Orpwood and Nancy returned to England and unloaded at Culham Railway Station, near Abingdon. As they reached the edge of the village Orpwood stopped at the Shepherd’s Hut for a pint and the horse continued on her own back to her stable.

At a junction we turn left into Chaucer Court and then follow the footpath as it goes left again to pass converted barns and then right past more converted barns.  We are now on a bridleway heading north towards the B4009 besides fields.

We stay with this path to reach the B4009, ignoring paths to the left and right.  At the road we cross and take a minor road opposite signposted to Brightwell Baldwin and Cuxham.  In just over a hundred yards we take a track on the left, Rumbolds Lane, going north towards Rumbolds Farm.  This is a clear track, but because of the time of year it is slightly overgrown in parts.

After passing the barns of Rumbolds Farm we continue on the track to reach a crossing of paths.  Here we turn right on a broad track between fields.

The track leads through gates into fields and then joins a track heading downhill towards Brightwell Baldwin.  On reaching a junction with a track we turn right and then at a minor road turn left to pass a gate house and continue into the village to reach St Bartholomew’s church.  Parts of this church, including the stair turret, date to the 13th century.

Opposite the church is the attractive Lord Nelson Inn, we rarely stop at a pub on our walk as I am not keen on drinking in the daytime.  So we decide to pass and pop back another time to take a look.

We continue through this pretty village, apparently its name derives from the old English for bright spring and the Baldwin part relates to the name of the family who once owned the manor.

We stay with the road through the village and pass the Old Rectory on the right and soon after reach a crossing of tracks.  Here we turn right onto Turner’s Green Lane waymarked to Britwell Salome.  We have now joined the route of the Shakespeare’s Way and follow this to reach Britwell Salome.

Just before reaching the road we take a path on the left which goes through a gate besides a cattle grid, still on the route of the Shakespeare’s Way.  The way-markers lead us around the field to reach a gate onto a lane where we turn left and follow this to reach St Nicholas Church.  Originally built in the 12th and 13th century it underwent major renovations between 1865-67.

The church is open so we pop inside.  It has a fine 13th century font with a 17th century cover and behind it a very grand organ for the size of the church.

From the churchyard we turn left and follow the track to cross a cattle grid and continue along a path and then through a paddock to reach the B4009.

We cross with care and turn right for about twenty yards and then turn left to join a track.  This is still the Shakespeare’s Way; this long distance path stretches 146 miles from Stratford-on-Avon to the Globe theatre in London.  This section leads us to the Ridgeway path where we turn right.

The route now follows the Ridgeway soon crossing a minor road and continuing to North Farm where the Ridgeway veers to the left. Here we stay on the track and soon go by the edge of Icknieldbank Plantation.

Reaching a minor road we continue straight along it for a few hundred yards and then turn right on the Chiltern Way heading uphill.  We pass an area of outdoor reared pigs and then an arable field.

We continue with the Cotswold Way to reach a minor road where we turn left and walk the short distance back to our starting place.

You can view this 9.5 mile walk on OS Maps and download the GPX File Here (Subscription to OS Maps Required)