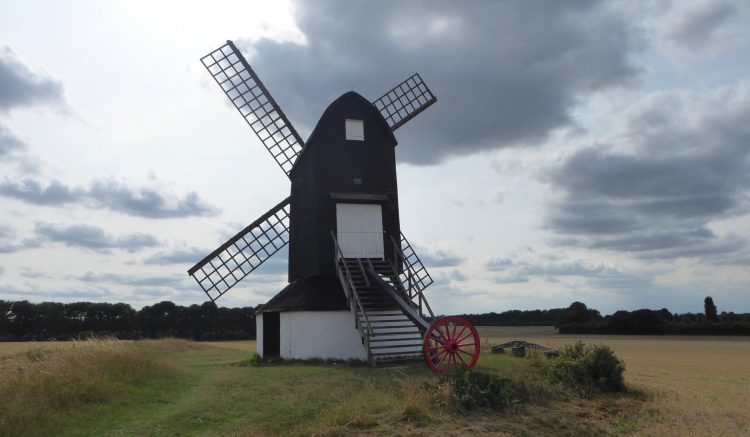 Over the last few days we have walked sections of the Ridgeway National Trail and I am keen to visit the point where the 87 mile trail starts, or finishes, at Ivinghoe Beacon.

The starting point for our walk is the National Trust car park for the Bridgewater Monument on the Ashridge Estate.  There is plenty of parking here and the road way up to the monument is busy on this hot afternoon with families picnicking and playing in the woods.

Many years ago I attended an event at Ashridge College the former home of the Egerton family.  Sir Thomas Egerton acquired the estate in 1604.  In 1800 Frances Egerton, the 3rdDuke of Bridgewater demolished much of the priory that stood on the site and then after his death the current house was constructed between 1808 and 1814.  I recall it being an impressive building which made up for the tedious management “team building” exercise.

The memorial was erected in memory of the 3rdDuke of Bridgewater who was considered to be “the father of inland navigation”.    He is considered a pioneer of canal building after he commissioned the construction of the Bridgewater canal which opened in1761, initially running from his coal mines at Worsley to Manchester and then later being extended in both directions to run from Leigh to Runcorn. 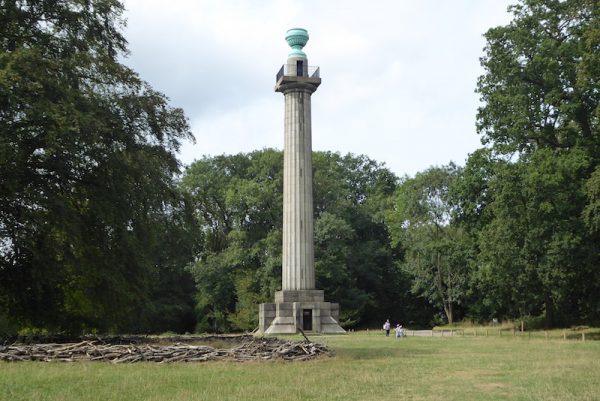 After passing the monument we follow the Icknield Way Trail in a northerly direction through the woods and then keep on the path as it heads west and downhill. 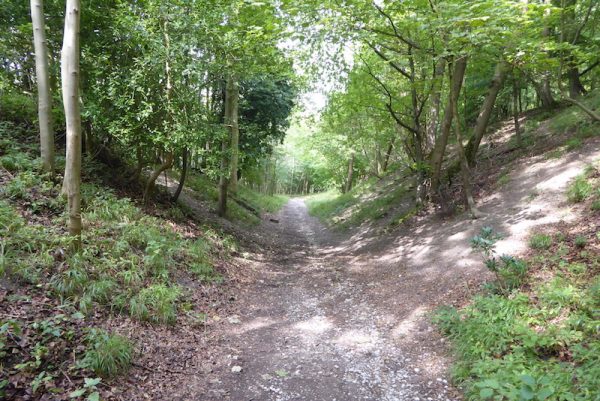 On reaching a lane we turn right still on the Icknield Way Trail, but then leave it at a footpath sign on the left where we enter a field. 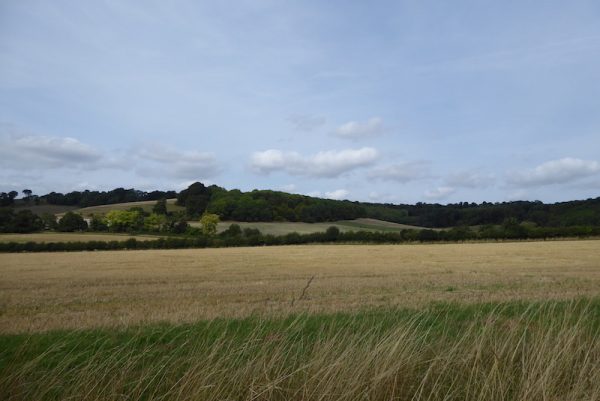 We continue on the clear route around the edge of arable land until we reach access land with fine views over the valley below. 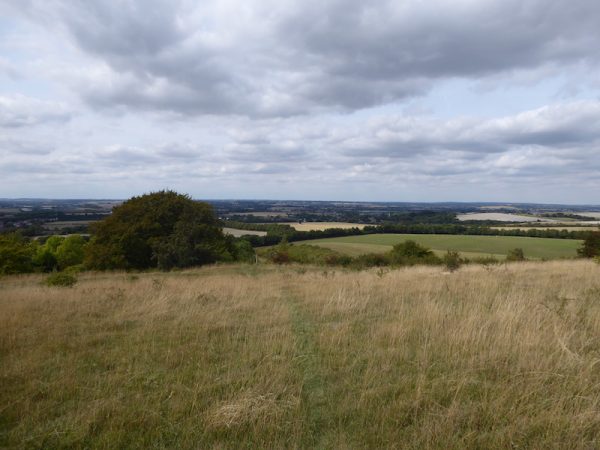 We follow a path heading north-easterly and then go through a gate to continue through shrubland running parallel to the road.  The path turns at ninety degrees as it approaches the B488 and continues amongst bushes besides this road.  At a gap in the hedgerow we turn right to cross the road and take a permitted path along the edge of arable fields before turning right to walk along the track to Pitstone Windmill. 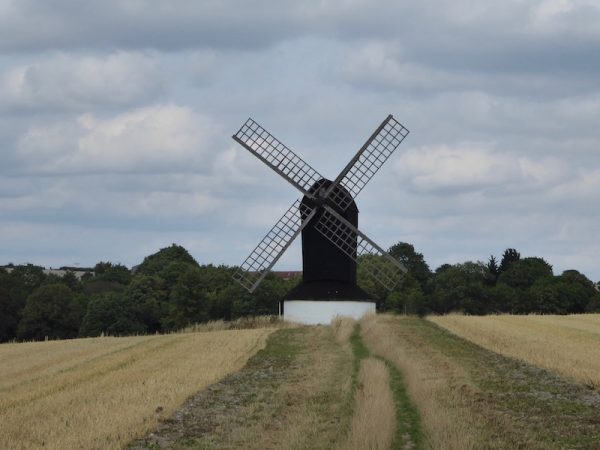 According to the National Trust, owners of the mill, it is a rare example of a post mill.  Apparently within the mill the date 1627 is inscribed in the woodwork of the building, but it is thought the mill was built earlier than that.

In 1874 the mill was sold to the third Earl of Brownlow, the then owner of the Ashridge Estate and he let it to a local farmer called Hawkins from Pitstone Grange.  In 1902 it was severely damaged by storms and it was not financially viable to repair.  In 1924 the Hawkins family purchased the mill but not having the finances to save it decided in 1937 that the best option was to gift it to the National Trust.

By the 1970’s the mill was back in working order and is now open to the public.  Unfortunately we arrive at a time when the mill is locked up, but it is still great just to view the exterior. 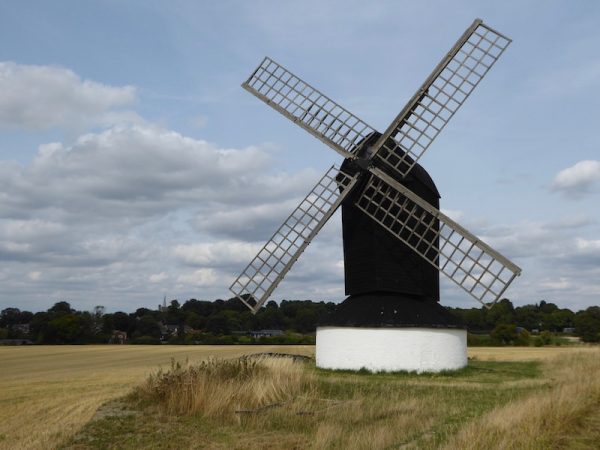 We carry on along the track until we reach the B488 at a sharp bend.  We only have a short distance to go on this busy road, but it is tricky because the verge is narrow and we are relieved to take a footpath on our right which heads along a path with woodland to our right and fields to the left.  We pass through a gate and then enter open pasture with views of Steps Hill in front of us. 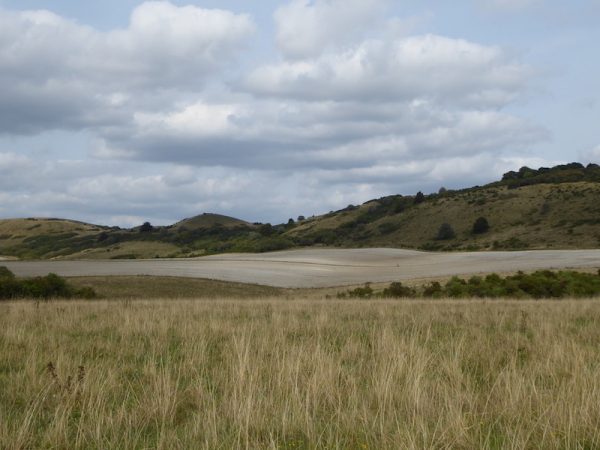 Our route takes us steadily uphill under the watchful gaze of  the grazing sheep. 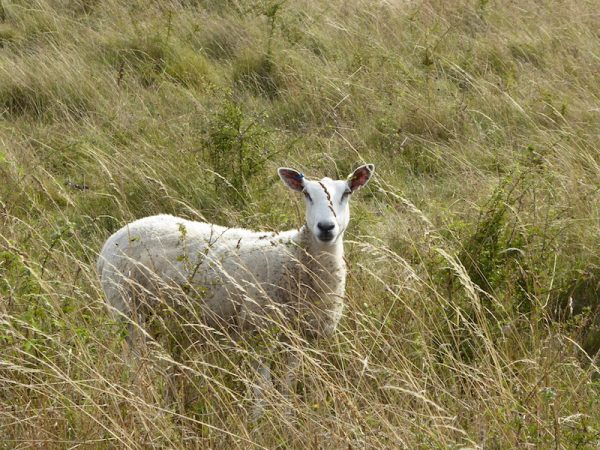 At a junction of paths we turn left, joining the Ridgeway National Trail and follow this as it heads above the impressive steep sided dry valley of Incombe Hole. 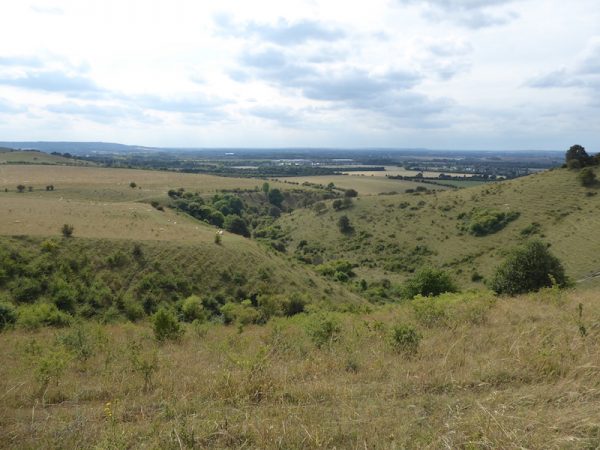 Still heading steadily uphill we stop for a breather and look back over Pitstone windmill before continuing on the Ridgeway to reach a road which we cross. 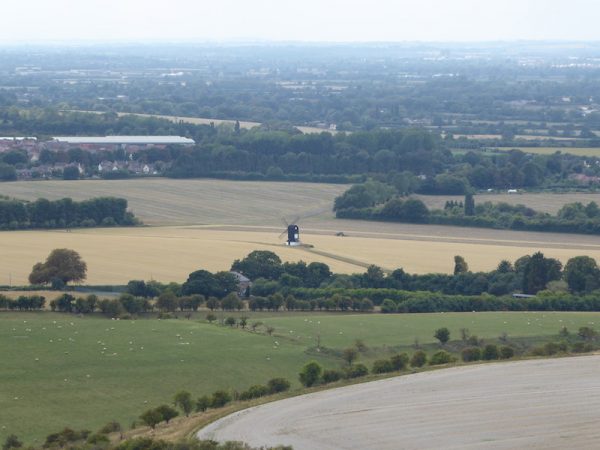 The route is now a series of ups and downs with some steep ascents, not too challenging today but they would be more so had we walked the whole 87 miles of the Ridgeway from Avebury.  At Ivinghoe Beacon there is trig point, this is the ninety-second I have bagged. 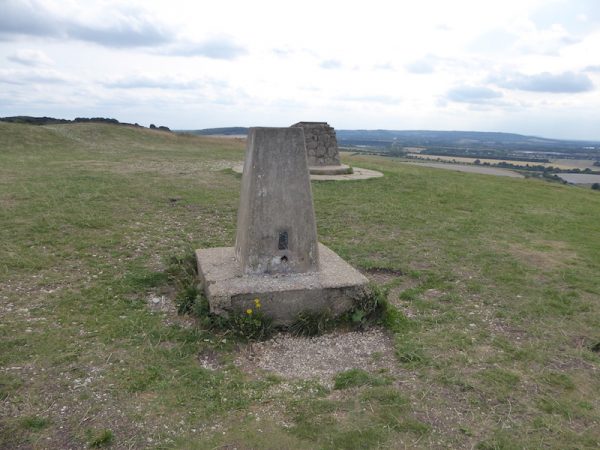 There are panoramic views from this spot including a cracking view of the Whipsnade White Lion. As chalk carvings go this is relatively modern, being first carved in 1933 to mark the location of Whipsnade Wildlife Park. 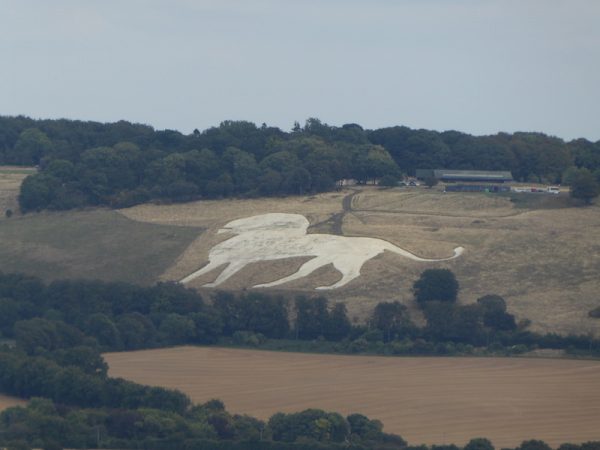 I have, of course, heard of this zoo but hadn’t realised its significance.  Whilst not being an advocate of keeping animals in captivity I can see the value when it comes to conserving endangered species.  The zoo was formed in 1926 when the Zoological Society of London purchased Hall Farm on the Dunstable Downs.   It is now the UK’s largest wildlife park and one of the largest in Europe with animals kept in sizeable enclosures.  It is not on my list of places to visit, but I enjoy the view of the White Lion.

Our route now takes us back along the Ridgeway path to the minor road, where we turn left just before the road to take a path that runs parallel to the road to arrive at a car park.  Here we go left through a gate and head downhill briefly across access land before picking up a track leading to another parking area.  We head towards the road and once again take a path running besides the road which is on our right.  After about a quarter of a mile the track meets the road and we turn left to walk along the wide verge besides the road for a few hundred yards to reach Crawley Wood.

This is a small wooded area, the number of well-worn paths suggest it is popular with dog walkers.  We follow a route diagonally through the woods to reach the southwestern corner.  Where much to Lynnie’s surprise we happen upon a trig point.  This is a beauty with a National Trust emblem on the front. This is the ninety-third I have bagged. 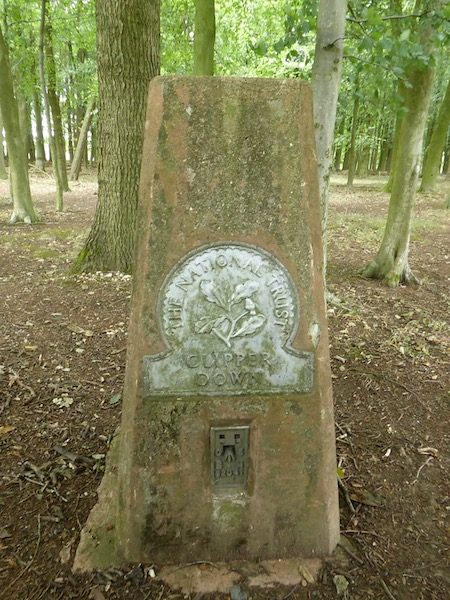 After taking the obligatory picture of the trig pillar we head back through the trees to reach the road, it is only now that Lynnie realises we have made a diversion to visit the trig point in order to feed my obsession with these lumps of concrete. On reaching the road we turn right and walk a few hundred yards besides the road before entering woodland on our right to follow a well-worn pathway that leads to a crossing of paths where we take the broad track heading east and then south along Duncombe Terrace.  Along the way there are occasional clearings to our right providing good views across the valley. 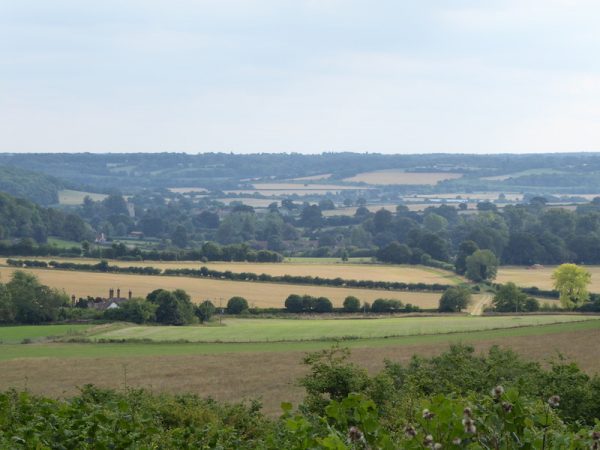 Various paths lead off this main track, we ignore all of them and after a mile we are back at the base of the Bridgewater Tower where we retrace our steps to the car.  Our walk has covered nine miles across some stunning countryside.  A week ago I would have quickly dismissed the idea of walking the Ridgeway National Trail, but after covering these northern sections I am more inclined to add it to my list of “to do” walks.

It is now time to head back to Cholsey Grange and start packing up.  After just over two weeks on this cracking site we are heading home tomorrow and I have a few weeks to make my final preparations for walking the South Downs National Trail.