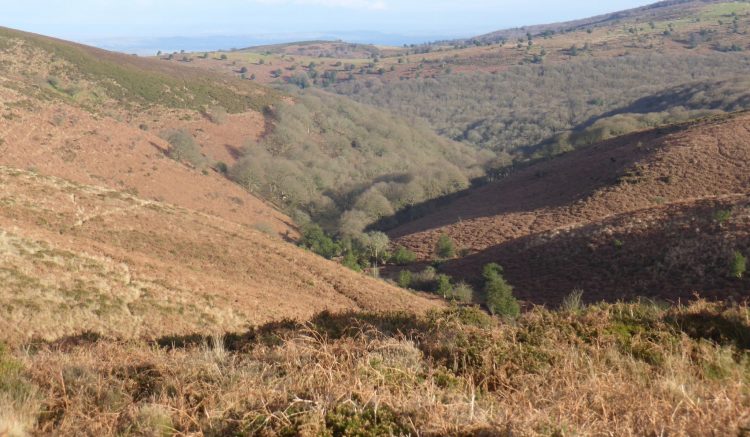 Our first trip of the year and we are back on familiar territory.  Those who have followed our blog for a while will know that at various times we have lived in Taunton; Somerset is a favourite location of ours.  So when deciding where to kick off on our 2017 travels Wellington seemed an obvious choice.  It gives us both a chance to catch up with old friends and do some cracking walking.

The Quantock Hills are one of our favourite walking locations in the country.  The mix of stunning scenery and some challenging walking meant that whilst living in Taunton we headed to these hills at least once a week.  Today dawns grey and wet so we spend the morning in the van, but before lunch there are signs of it clearing so we head out.

Being a creature of habit I return to the car park at Dead Women’s Ditch, located right on top of the Quantock Hills.  I even park in what I used to consider “my space”.  When I open the back of the car Dexter has a good sniff of the air and I am sure he knows where he is, despite a two-year absence.

Leaving the car park we follow the narrow road opposite down to the footpath to Dowsborough hill fort. 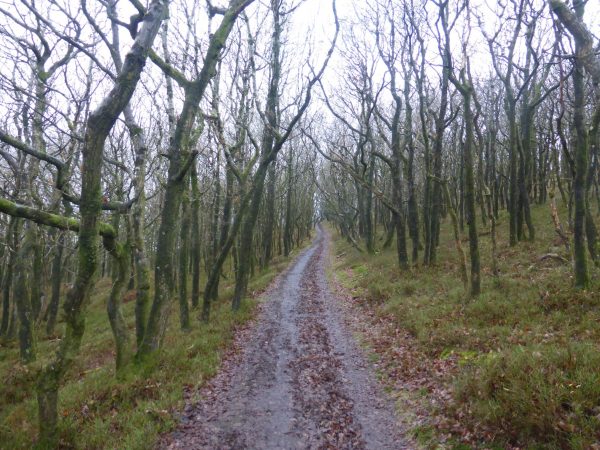 It is a steady climb to the Iron Age fort. It stands at a height of 340 metres and has splendid views over the Bristol Channel and to the East, over the valley of the River Parrett. The only blot on the landscape is Hinkley Point nuclear power station. 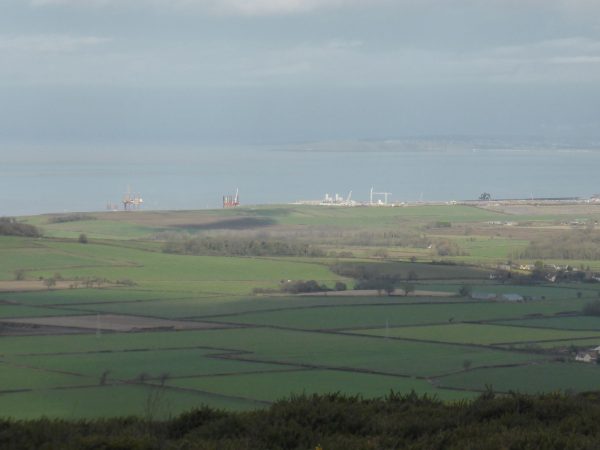 Since our last visit the Government has approved the construction of a new Nuclear Power Station on this bit of coastline.  Hinkley Point C will sit alongside the two existing Nuclear Power Stations Hinkley Point A & B.  The new power station has a projected life of sixty years.  Leaving aside the discussion of the wisdom of building nuclear power stations this construction was surrounded by controversy in the way the finance deal for the site was assembled.   Some say the Government has signed up to a deal that will see them (or should I say us!) paying over the odds to those constructing and then operating the site; the mainly state owned EDF from France and the state owned CGN of China.  Is it just me?  Where is the logic in paying other governments to have the ability, at the flick of a switch, to turn off part of our power supply?

From the hill fort we descend to Woodlands Hill.  All the while discussing the challenge of ensuring there is power to supply the ever-increasing demands of our society without encumbering future generations with the legacy of clearing up the mess behind us.  Of course we think the solution is for more “green energy”, in the early seventies, when a schoolboy, I recall talk of generating electricity through harnessing the power of the tidal flow in the Severn Estuary.  Perhaps if some of the £24.5b projected spend on Hinkley Point C was used to develop such a system we could provide a safer environment for future generations. 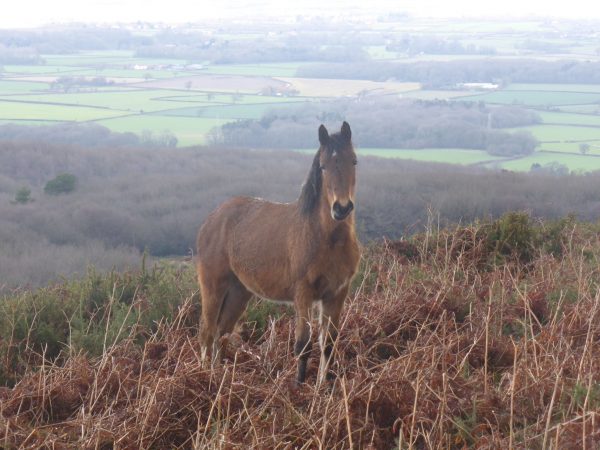 Over Woodands Hill we carry straight on as the path descends towards the outskirts of Holford.  On reaching the tarmac lane we turn left to head into the village.  In the village we turn right and then left to walk past the Bowling Green; soon after arriving at the Dog Pound, where the local stray dogs used to be housed. 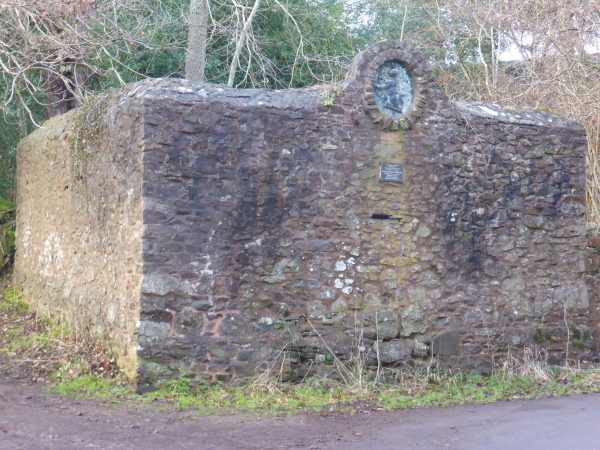 Apparently local hunting dogs were kept on the Alfoxton estate, cared for by the huntsman.  The meat for the hounds was hung in trees attracting local stray dogs who unsettled the hounds. One night the huntsman was awoken by the sound of dogs and went to investigate, unfortunately he did not put on his normal hunting garments and as a result was attacked and killed by his own dogs. To prevent strays causing a repeat occurrence the dog pound was built.

At the pound we take a broad, uphill track, it is a long gradual climb, which continues after passing through a gate.  At a junction of tracks we take a turning to the left to head up a ferocious hill.  Relatively short in distance but seriously steep.

The steepest section completed we carry on uphill stopping briefly at the plantation of firs planted to commemorate those from Holford and Kilve that fought in World Wars I and II. 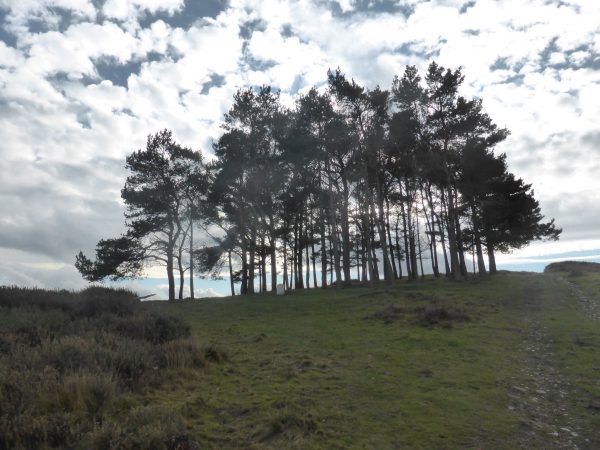 Our route continues upwards and at the top of the hill we see the trig point in the distance in front of us on Beacon Hill.  It is a while since we were there and as it is now an absolutely stunning afternoon we decide we should head for it.

A couple of years ago we walked along he ridge from Dead Woman’s Ditch to Beacon Hill, it was probably the windiest day we have encountered in all our walking.  Approaching Beacon Hill we struggled to stay on our feet.  It certainly blew out the cobwebs! Today is a total contrast, despite it being mid February there is hardly a breath of wind and it is almost spring like.  Our walk has been accompanied by constant bird song. 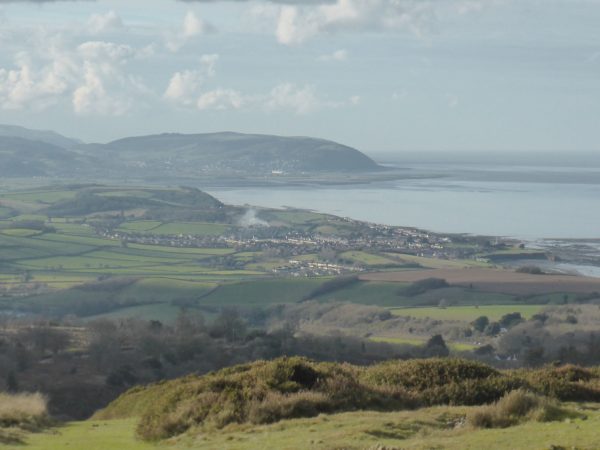 Looking across from Beacon Hill toward Watchet in the foreground and Minehead beyond we turn and see the second Severn Crossing just visible in the distance, there is hardly a ripple on the Bristol Channel.  On days like this I think I should retire and devote more time to travelling and walking!

From Beacon Hill we turn and retrace our steps until we meet the broad track and then turn right soon passing Bicknoller Post. 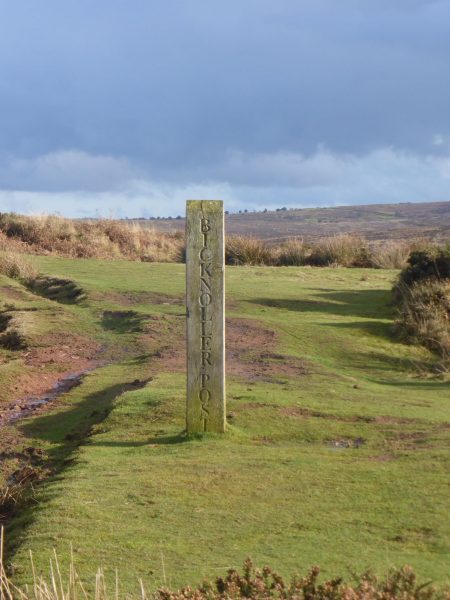 Our route carries on along the broad track; at Halsway Post we take the wide, uphill track in front of us.  At the top we turn left to walk to the trig point and then take the path to the right to head towards Crowcombe Park Gate.  Before reaching the road in front of us we take a path on the left, which gradually descends to the road.  We then cross the road taking the muddy path on the opposite side to follow back to Dead Woman’s Ditch.

Our wander has covered eight miles and has been absolutely stunning.  There has been a real feel of spring in the air, we have seen gorse in flower, signifying the kissing season, the birds have been singing and the sun has been on my back.  What more can a boy ask for!  Happy days! 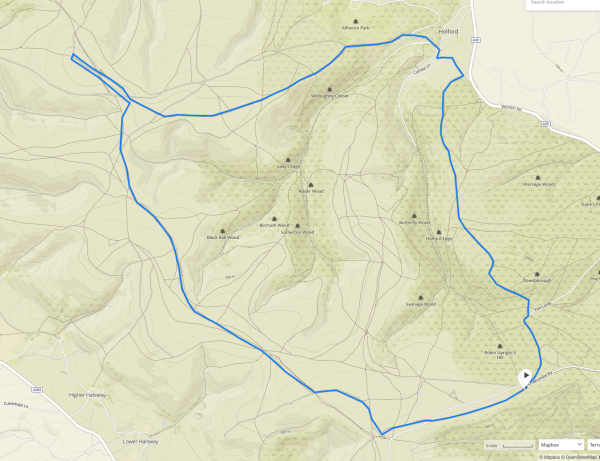 [To follow our walk you will need Ordnance Survey Explorer Map ]