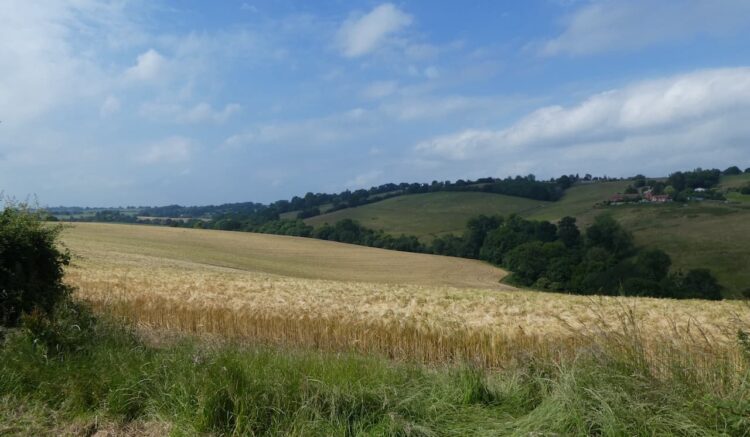 Since arriving at The Old Orchard CL we have been treated to a cracking view with hills in the distance.  To me the sight of hills means one thing, a potential trig point to bag.  To Lynnie they indicate a challenging walk.  Over the years we have been walking I know that Lynnie is not that keen on hills, but we try and sneak up on them when they are not looking and sometimes they become docile and easy to tame.  So that’s the plan for today’s walk up Abberley Hill.

The starting point for our walk is the large village hall car park in the village of Abberley (WR6 6AZ).  From the car park we turn left heading towards Abberley Village and then at a road junction turn left into Suffolk Lane and stop to look at the cracking Victorian church of St Mary’s.  This church was built between 1850 and 1852 and then rebuilt in 1876 after a fire.

From the church we turn right and walk a couple of hundred yards through the village and then take a footpath on the right passing through a garden before entering an arable field which we cross and then on reaching a lane turn right.  We stay with the lane for 500 yards until we reach Worsley Farm.

For a number of years Worsley Farm has apparently been an equine health and rehabilitation centre, prior to that it was the base for the trainer Henry Oliver.  We take a footpath on the left going besides the stables and then continuing along besides gallops.

The path reaches a property and then skirts around a fence.  It is not entirely clear where the footpath goes as it reaches woodland.  What is clear is that others have been walking down a ride between the trees so we follow this route as it heads steadily downhill.

At the bottom of the hill we turn left and walk along to join a footpath on the right which enters woodland and leads towards a stream.  Initially the path is clear, but as we near the river it becomes overgrown and it takes a while to identify the path leading to a slightly dilapidated footbridge across the stream.

On the far side of the bridge we head uphill towards Palmer’s Farm where we turn right along a track to join the route of the Worcestershire Way.  This is a long distance path  which covers 31 miles from Bewdley ending in Great Malvern.

At a minor road we go left and pass a roadside pond.

Then very quickly take a track on the left, still on the route of Worcestershire Way.  The path follows the track steadily downhill to pass another pond.

The route then goes uphill along the edge of a field heading towards a minor road and woodland.

At the road we turn left to stay with the Worcestershire Way.  We ignore a footpath on the  right and then after passing the disused Shavers End limestone quarry we go right following a path besides the edge of the quarry.  Quarrying here started back in the early 1900’s but became a major commercial activity in 1951 when permits were first issued for limestone extraction.

The path soon heads steeply uphill at the end of the quarry towards the hill ridge.  Apparently the water in the quarry is somewhere local youngsters think is a good place to swim and ignore the fencing and warning signs.  Swimming in old quarries is particularly dangerous because of the cold nature of the deep water, in recent years there are reports of three young men who have tragically lost their lives here.

Going along the ridge we get a cracking view of Abberley Clock Tower, this was built in 1883 as part of Abberley Hall.  It stands at 161-feet and it is claimed it is visible from six counties.  Apparently during World War II it was used as an observation tower to spot enemy aircraft heading towards Birmingham.

There are a network of paths here, but we stay with the Worcestershire Way along the ridge at the top of the hill and through Flagstaff Wood to reach an Ordnance Survey Trig Pillar.  This is the 258th trig I have bagged.

The path now descends through the trees to reach a minor road where we turn left.

The road continues downhill to the A443 which we cross and then take a footpath opposite going along a track heading towards Abberley Hall. This are is part of a medieval deer park given to Ralph de Toni by William the Conqueror.

We carry on along to reach the grounds of Abberley Hall, this is now a public school and our hopes of getting a close up view of the Clock Tower are thwarted because it would mean  diverting off the footpath into the grounds of the school.

We retrace our steps from the school grounds and then take a footpath on the left along a track heading in a north westerly direction.  Initially this is easy to follow but as we meet a junction of paths it becomes rather overgrown.  I assume this is a combination of the time of year and a path that is not regularly walked.

We join the A443, which was the Worcester to Tenbury turnpike road and turn right on the pavement to head towards Abberley.  At a fork in the road we leave the A443 and go left into the village and continue on to our starting point at the village hall.

Our walk has covered just over ten miles, it has been a marred by sections of overgrown footpaths but that it is one of the hazards of country walking in the summer months.