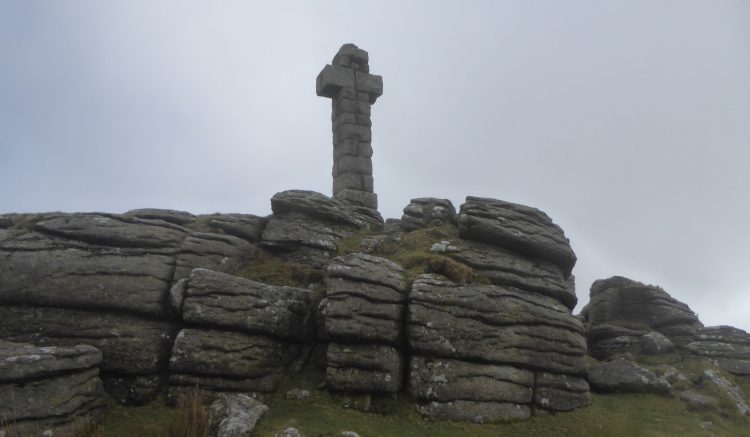 The forecast for the coming week is not great so as today is dry we think it is probably a good day to explore some of Dartmoor.  From our pitch at Lydford Caravan and Camping Park we can see the edge of the moor and low cloud keeps drifting across the Tors, but it is interspersed with the odd spell of sunshine so we are soon lacing up our walking boots and heading off.

Leaving the site we turn left at Lydford Cross and walk out of the village along the road. Crossing the busy A386 by the Farm Shop we take the lane opposite to the left of the Dartmoor Inn.  This leads to a gate accessing the western edge of Dartmoor. 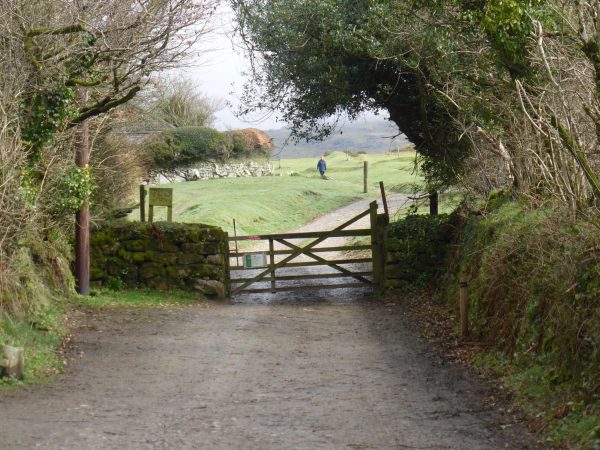 We follow the path on the left, with a wall running to our left, to stepping stones and a footbridge over the River Lyd.  We discuss the merits of using the stepping stones, but err on the side of caution and take the footbridge. 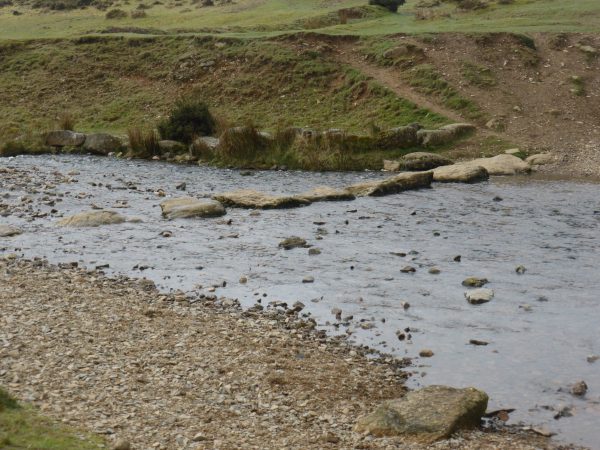 On the opposite side we swing to the left and follow the path heading uphill between Arms Tor on our left and Brat Tor on our right.  On top of Brat Tor is the distinctive Widgery Cross. 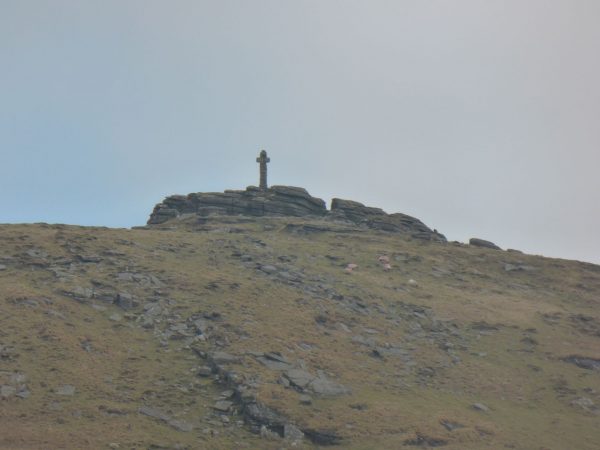 As we climb we veer to the right to visit Brat Tor and take a closer look at the Widgery Cross.  This is so named because it was erected by William Widgery to commemorate Queen Victoria’s Golden Jubilee in 1887.  Apparently the cross stands 12.99ft high with a span of 4.5 feet, its location on top of Brat Tor (452 metres) means it is visible for miles around.

William Widgery was born in 1826 in North Molton and trained as a stone mason, he then moved to Exeter and took up painting in his spare time.  Apparently his pictures were spotted hanging in a pub by a chap called Thomas Hex who persuaded him to give up his job to paint full-time.  Widgery was successful and prolific, painting over 3,000 landscapes many of which featured Dartmoor.  He moved to Lydford in 1880 and built a house, now The Lydford House Hotel, which we passed as we left the village.  Widgery died in 1893.

We head off in a north-easterly direction towards Great Links Tor, however, cloud now envelops this and given the poor visibility we decide to follow the path that passes Dick’s Well and circles Great Link Tor. This route is uneven and muddy, but at least with the well-worn path and occasional distinguishing features we can follow our route on the map. 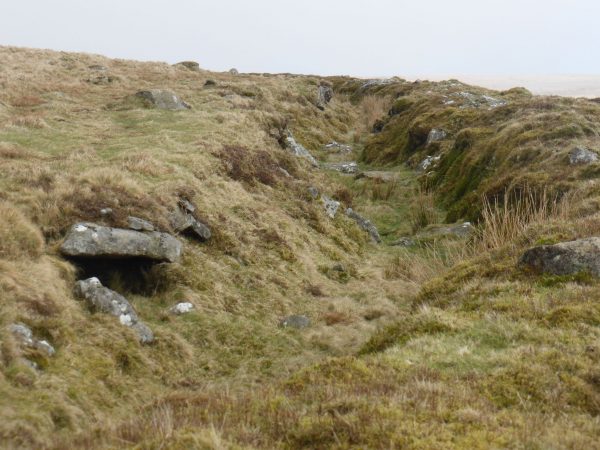 The cloud is clearing from Lower Dunna Goat making it an ideal picnic spot.  The sun is trying to break through and we might get twenty minutes of clear visibility.  Despite being so high and exposed there is hardly a breath of wind and it feels like a spring day as we enjoy our refreshments. 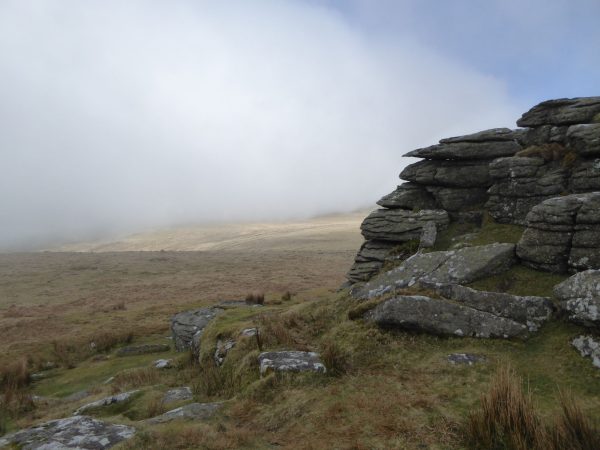 Starting off again we round the corner to reach the aptly named ruins of Bleak House.  This house was originally built in the late 1800’s after the Duchy of Cornwall granted a license for the extraction of peat from Amicombe Moor.  It was home to the manager of the peat works and was originally known as Dunnagoat Cottage.  No matter what it was called it must have been a desolate place to live. 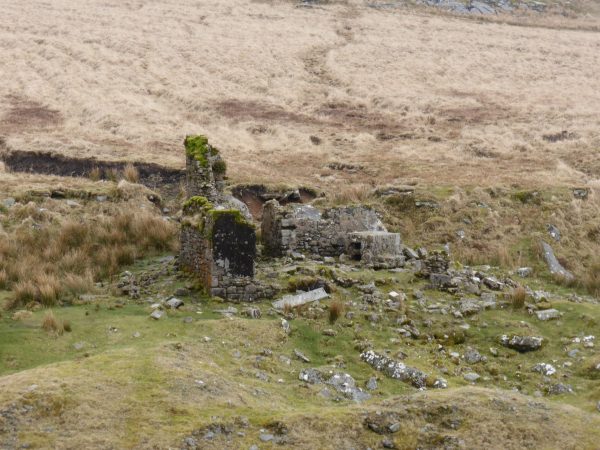 Our route continues alongside Rattle Brook, but soon the path divides and a notice advises us to follow the route to our left.  This is a clear but boggy path leading across the moor to join a well-defined stone track.  Here we turn left and follow the path as it first heads west and then turns to the north.  Visibility is down to about seventy yards so apart from our immediate surroundings we cannot see a thing. 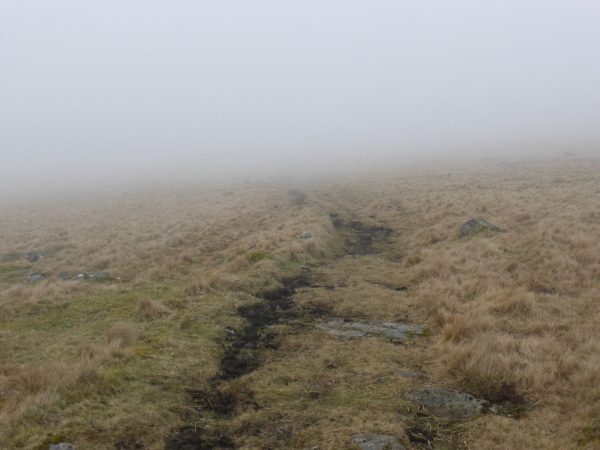 I would not want to venture here without a map or compass.  I do not class myself as a great navigator in these conditions, but at least we know where we are heading, without the clear track it would be rather more challenging.  We are soon able to confirm our location as we pass over the River Lyd, this is not far from its source but already it has gathered water from the surrounding moor to make it more substantial than other watercourses we have seen.

There is now an option to follow the river eastwards, but due to the conditions and our lack of familiarity with the area we remain on the track and follow this as it winds its way downhill and then doubles back on itself to traverse Coombe Down.

At a junction of tracks we head north towards Sourton Tors and after half a mile veer to the left to cross the top of Lake Down before joining a track and turning left to head east above the deep valley. 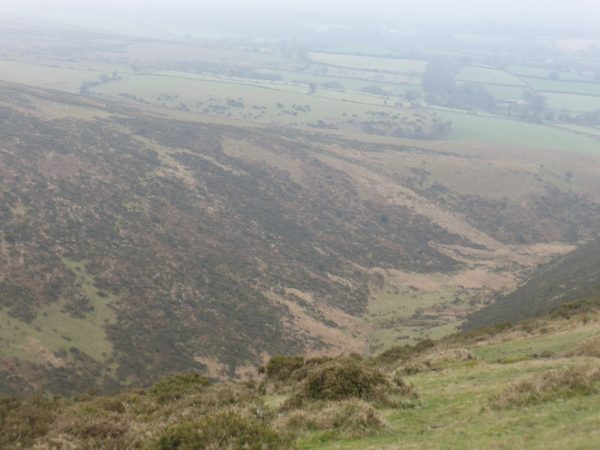 As we head down hill the path bends to the right giving a stunning view of Lake Viaduct. 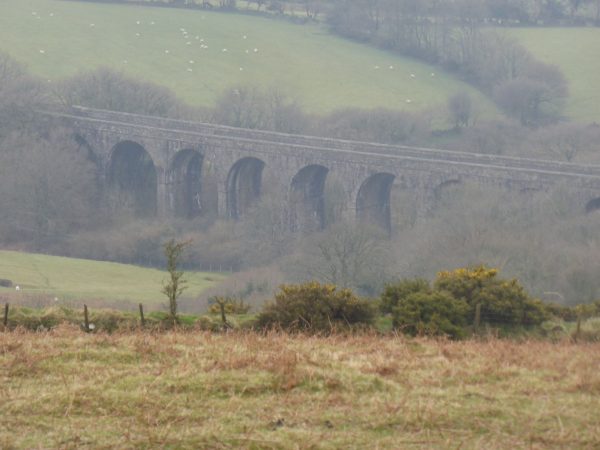 Descending the hill we can opt to turn left and then pick up the Granite Way or turn right and walk below Sourton Tors.  It is a cracking afternoon and the view of the Tors is impressive so we head that way. 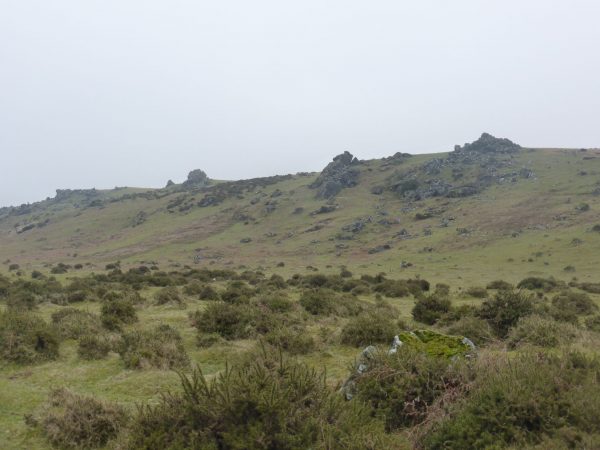 After half a mile we turn left to walk down towards Sourton to pick up the Granite Way by Sourton Church.  I am not a religious man but usually find something fascinating when visiting churches.  The Church of St Thomas a Becket does not disappoint. 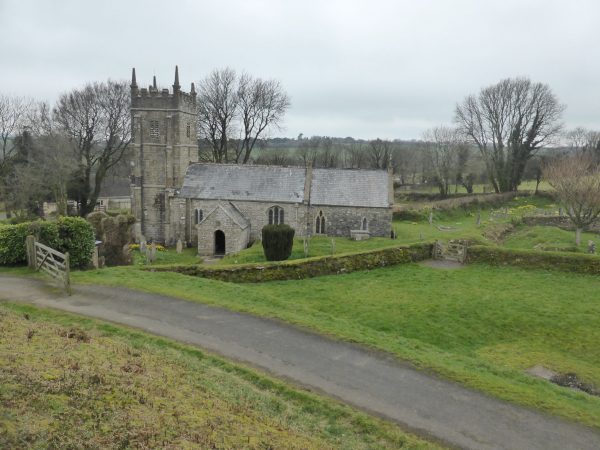 Inside there are a number of interesting features, Lynnie is struck by the carved angels but I am impressed by the recently restored coat of arms of Charles II. 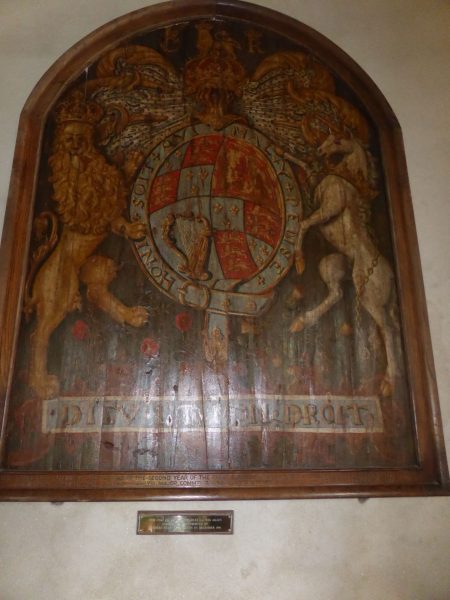 After taking it in turns to pop into the church we join the Granite Way turning right towards Lydford.  This eleven-mile path between Oakhampton and Lydford follows the route of the dismantled London and Southwestern Railway line.  This railway line was constructed to take a route north of Dartmoor from Exeter to Oakhampton and then on the western edge of the moor from Oakhampton to Plymouth.  The Great Western Railway had the southern route of the moor between Exeter and Plymouth.

The section between Oakhampton and Lydford was opened in 1874 and then from 1876 connected to Plymouth.  The route closed in 1968, however, it has been reported that problems caused by recent storms along the existing Exeter to Plymouth route have caused Network Rail to consider reopening the line.  I am not sure how feasible this would be but it would create an incredibly scenic journey. 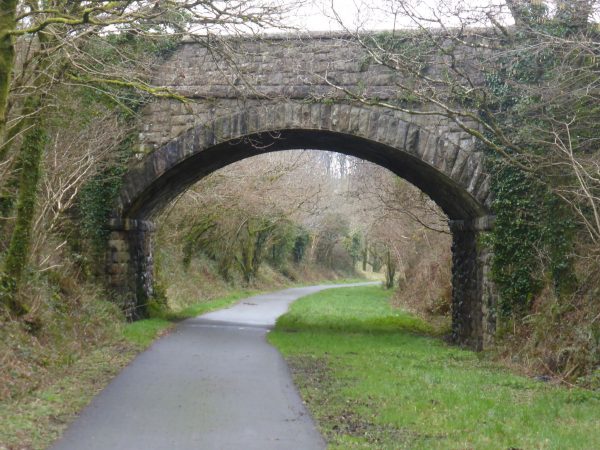 We are soon heading across the Lake Viaduct pressing on towards Lydford.  I like the history of old railway lines, but the very nature of their construction, with lengths of cuttings, means there is little to see along some sections.  However, if this route did not exist the alternative would have involved walking besides the main road.  I would rather no view than a view of a delivery van flying towards me!

Just past Fernworthy Down we can see our caravan in the distance on the hill opposite, thoughts of the kettle singing makes us put a spurt on and are soon back on the outskirts of Lydford by the Lydford House Hotel.  From here we turn right into the village and then back to the caravan park. 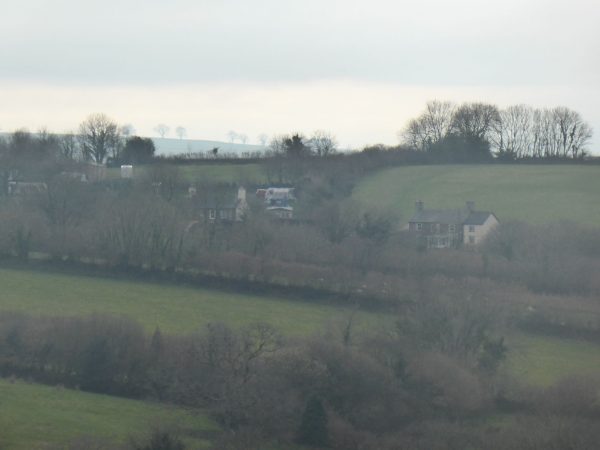 Our walk has proved most enjoyable and covered almost eleven and a half miles.  I am sure we missed some stunning views because of the mist on the moors, but somehow I would have felt cheated had it been a clear sunny day.  It would have left us wondering what all the fuss was about when it comes to being prepared for walking on Dartmoor. 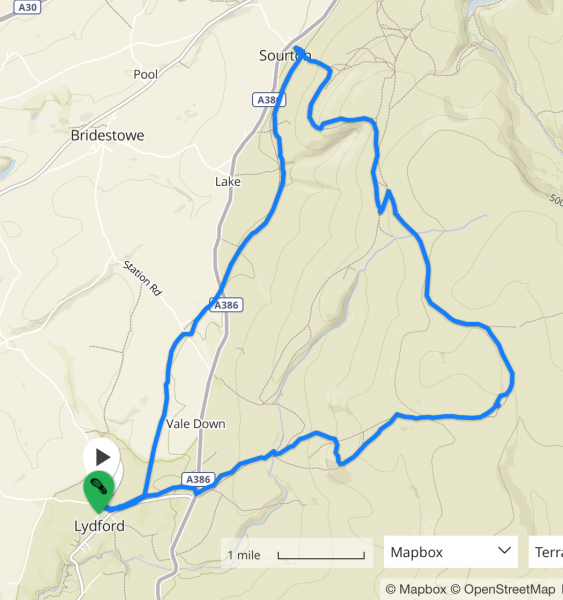 [To follow our walk you will need Ordnance Survey Outdoor Leisure Map 28 – Dartmoor.]