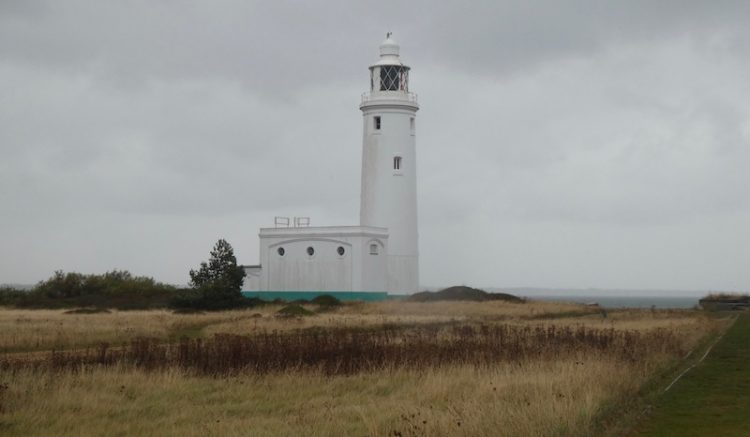 When at home most of out walking is done from the village, occasionally I venture a bit further afield but not often.  I grew up here and have walked the local footpaths for well over fifty years and I can always find something interesting even on the most familiar of walks.  Lynnie hails from Dorset and having grown up near Poole has an attachment to the coastline, which I do not always share, especially when it involves cliffs.  However, today it is our wedding anniversary and Lynnie has requested a visit to the coast.

The starting point for our walk is the car park at Barton on Sea at the western end of Barton-on-Sea Golf Course (Grid Ref SZ245928).  Today’s forecast is not great with rain predicted to settle in later, so we pack our waterproofs in our rucksacks and head off east along the coastal path that follows a route between the boundary fence of the golf course and the cliff edge. 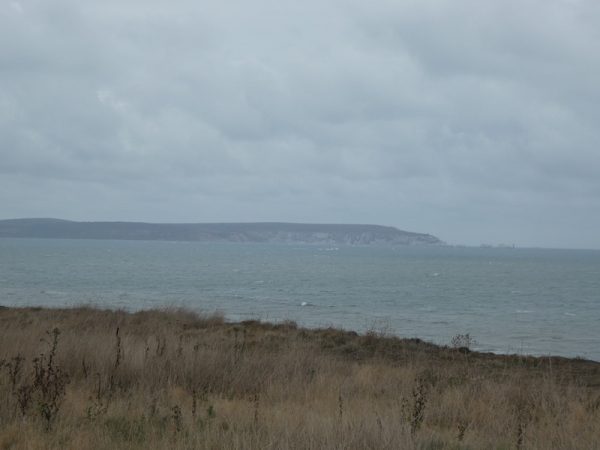 I have played golf on this course many times, it became a private members club relatively recently in 1986.  Prior to that there had been a series of private courses along this stretch of coastline dating back to a nine hole course which was opened in 1897 as an amenity for guests of the Barton Crown Hotel. 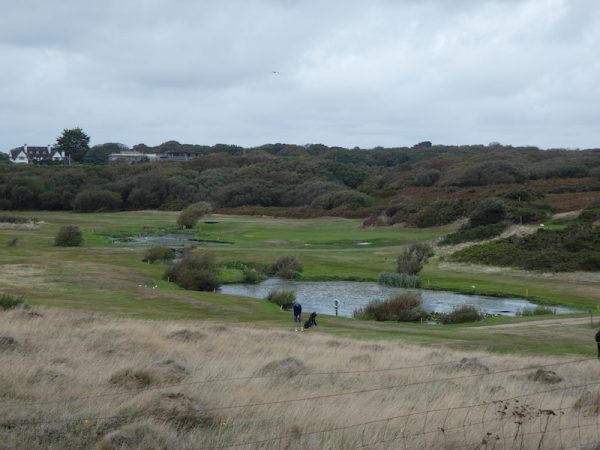 Being so close to the eroding cliff edge the course is always at risk of losing holes due to erosion.  As we head along we see evidence of landslips. 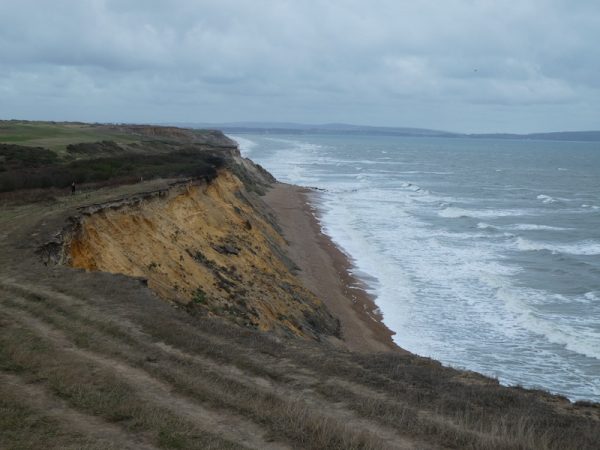 Out to our right there are views across the Solent to the Isle of Wight, visibility is not great today but the Needles can just be seen.  Our route is very straight forward we stick with the coastal path as it heads onto Hordle cliff, stopping briefly to bag the trig pillar besides the path on Manor Farm, this is my 170th trig. 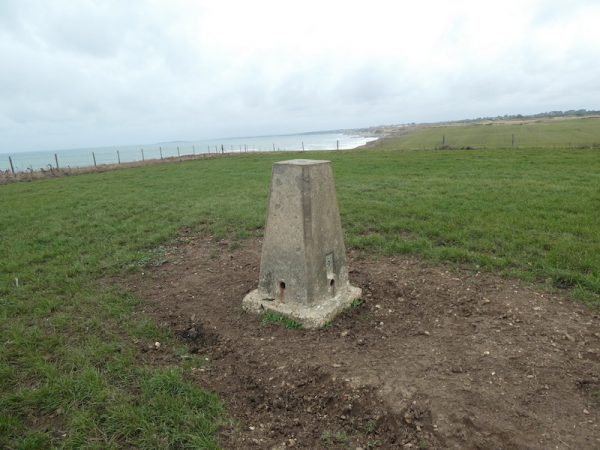 As we continue along the wind, which was already blustery, picks up.  Below us we can see the beach huts of Milford-on-Sea. 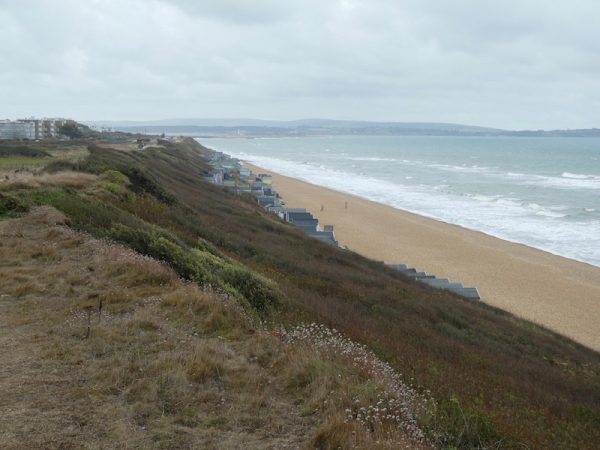 Nearing a car park the rain starts, conveniently there is a shelter to protect us from the elements whilst we don our waterproofs and stop for a sandwich.  Out of the wind and rain it is quite pleasant, but when we resume our walk we are soon grateful for the waterproofs.  We stay with the coast path as it passes concrete beach huts built into the sea defences. 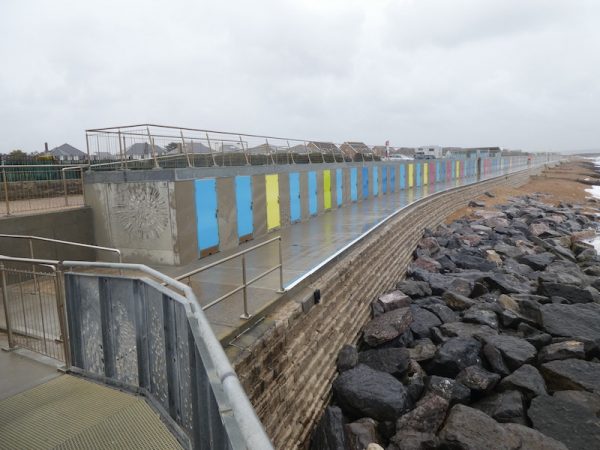 We continue along to reach the Marine House Hotel and Bar. 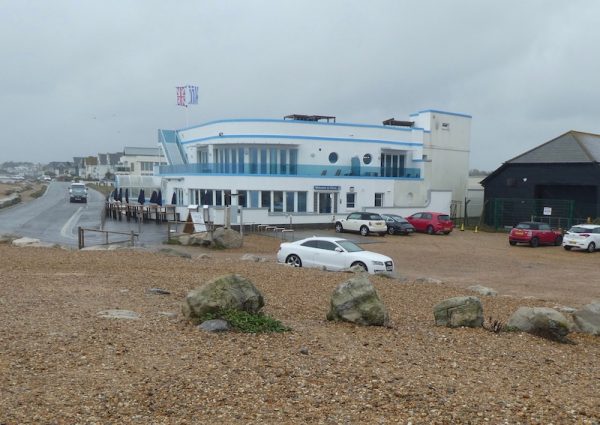 Our route is now along the shingle bank towards Hurst Point; we are being lashed by wind and rain as we trudge through the shingle. 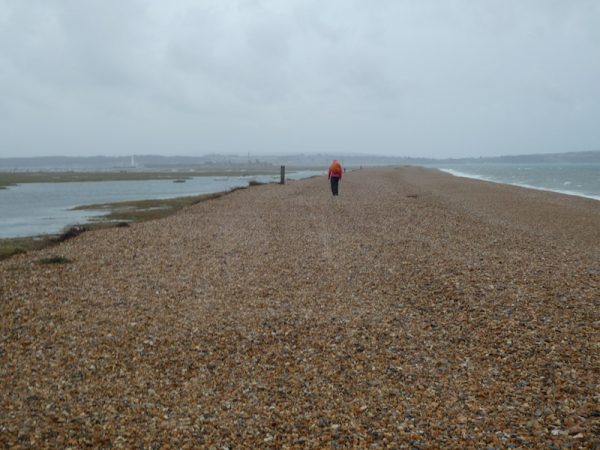 Inland to our left is the Lymington and Keyhaven Marshes Nature Reserve which covers around 3,000 acres of grazing farm land, mudflats and lagoons. 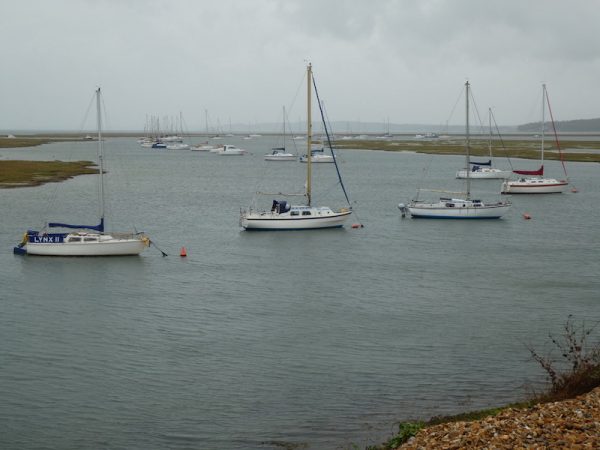 We stay on the shingle bank until we reach Hurst Castle.  King Henry VIII first established an artillery fort here in 1541 and it remained a strategic defence position protecting the Solent until 1956.  During the Napoleonic Wars it was significantly enhanced and then between 1861 and 1865, when fears arose that the French might invade, the East and West Wings were added.  The castle continued in use during World War I and World War II. 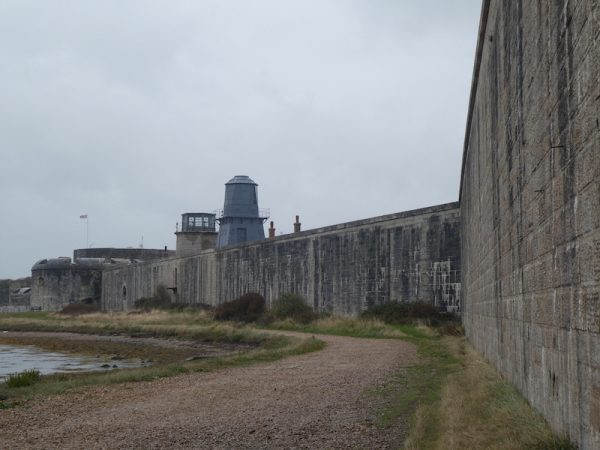 The castle is now taken care of by English Heritage and is open to the public.  We pop our head inside to enquire about how long it would take to tour around and discover we need a good few hours, we don’t have that long today so will have to return another time.

Over the years the spit has been the location of four lighthouses, three remain, but only one is still in use.  The first lighthouse was built in 1786 and it paired one built on the Needles at the same time, this one was pulled down on the 1860’s to make way for the west wing extension to the garrison at Hurst Castle.

In 1812 a taller lighthouse, known as the High Light, was built because the Needles obscured the original lighthouse.  A new low light was built in 1865 inside the wall of the castle this operated until 1911, when it was replaced by a metal structure that was used until 1997, it is now painted grey so as not to confuse shipping. 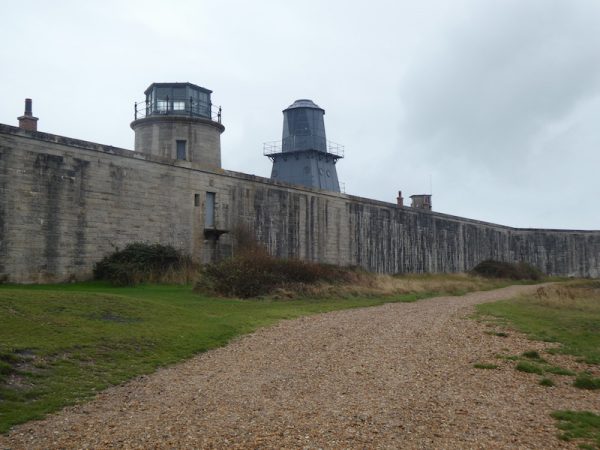 The High Light tower was replaced with a new tower, also known as the High Light, which was built about fifteen metres further along the spit.  This light still functions and is a key aid to shipping using the busy Solent. 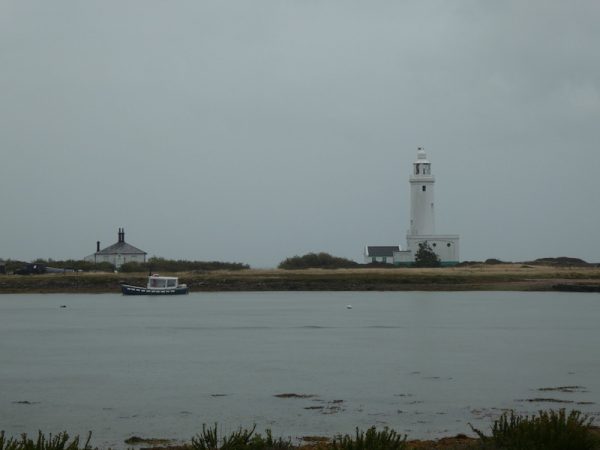 We have two options from the castle; we can either walk back along the spit, or take a boat trip on the channels through the mudflats to reach Keyhaven.  We choose the latter and are the only passengers as the small vessel motors away from the castle and lighthouse. 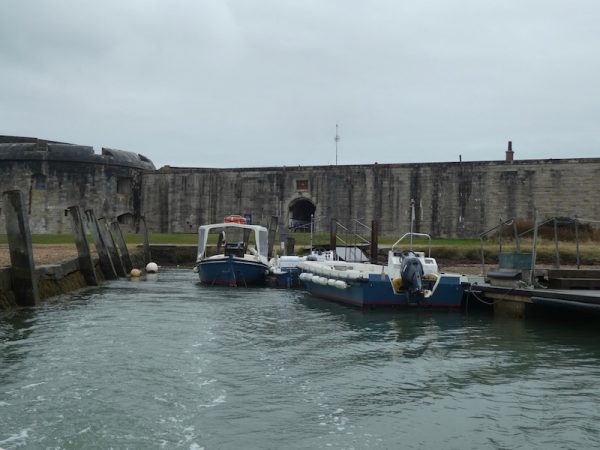 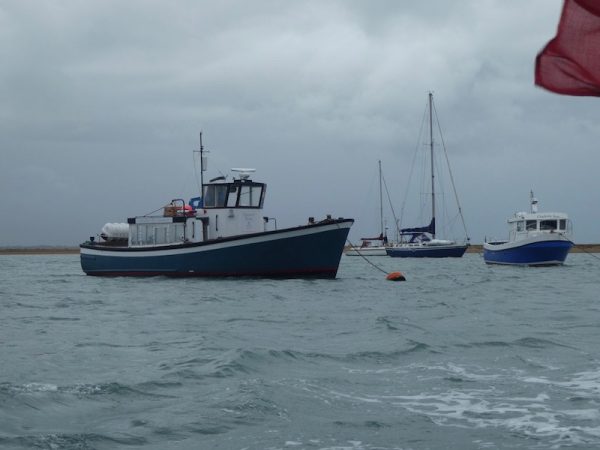 This short trip on the water is enough for me and I am pleased to return to terra firma at Keyhaven.  We walk past the Yacht Club, which given the abundance of yachts moored here is a modest building. 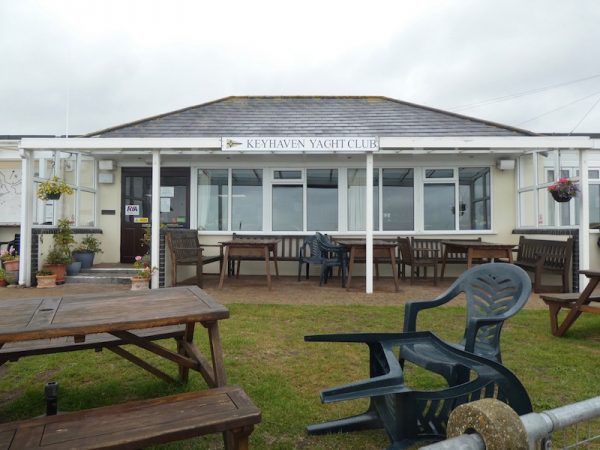 We keep on the footpath as it follows the harbour wall. 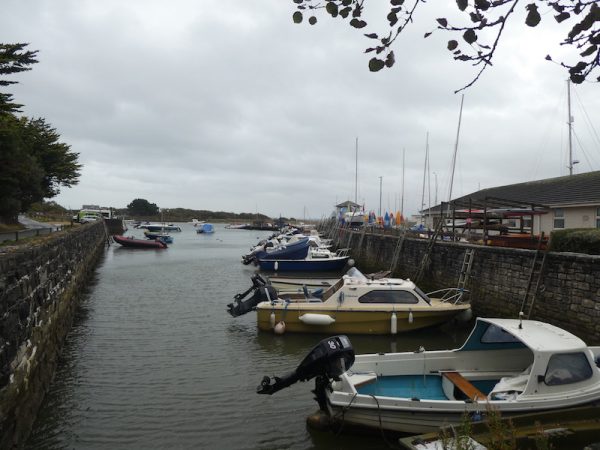 On reaching a minor road we turn left and walk a short distance to a T-junction, where we turn right and walk away from the Gun Inn.  We continue besides the road until we reach a green where we turn right to join Lymore Lane.  This lane sweeps to the left and out of the village passing the entrance to Vidle Van Farm, a few hundred yards further on we take a footpath on the right along a concrete driveway between fields. 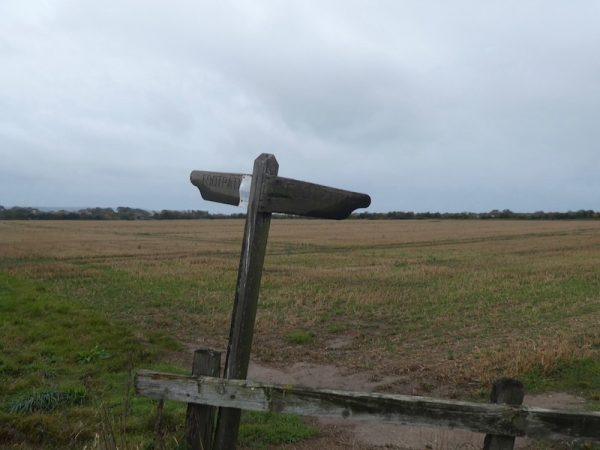 We follow the way markers, as the path turns left and then almost immediately right to go along the edge of a field heading towards Agarton Lane.  On reaching the lane we turn left and then on our left hand side on a bank besides the road stop to “bag” an Ordnance Survey trig pillar, my 171st. 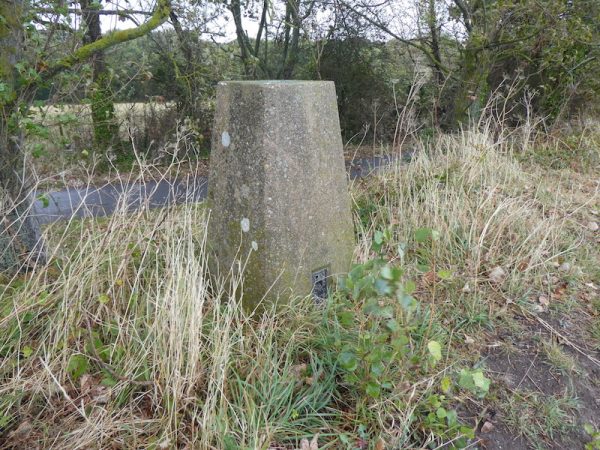 We follow the lane bearing left at a fork and then at a junction turn left along Lymore Lane.  After a couple of hundred yards we take a footpath on the right which heads across arable fields towards Milford-on-Sea. 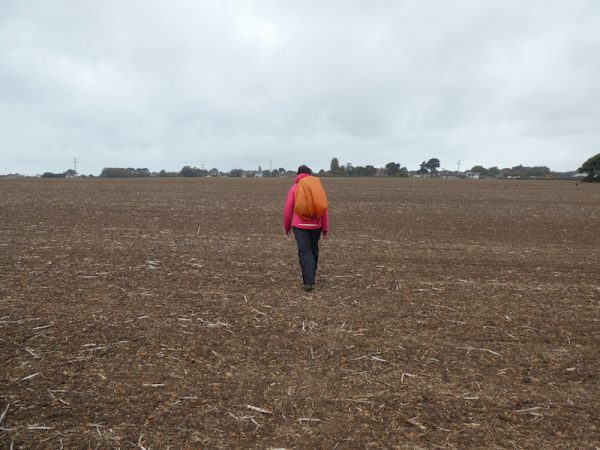 At the B3058 we turn left and walk along the pavement to the entrance to a churchyard, we cross the road and go through the gravestones to visit All Saints Church, the main structure was built in the 12th and 13th century with the tower and steeple added later. 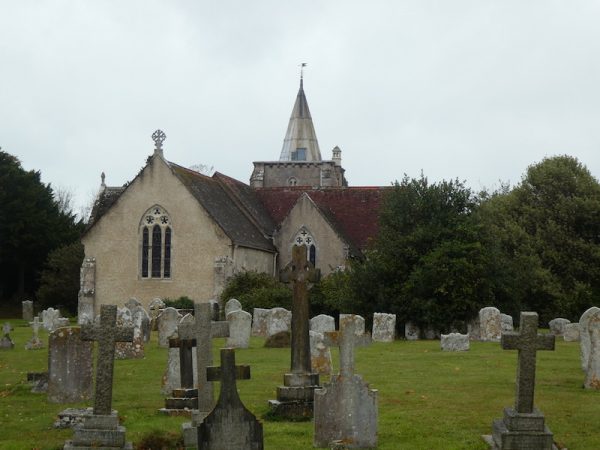 We leave the churchyard through a gate leading to a footpath heading in a westerly direction.  This leads us to Barnes Lane where we turn right and follow the road for a few yards before taking a footpath on the left  leading through a wooded area with ponds. 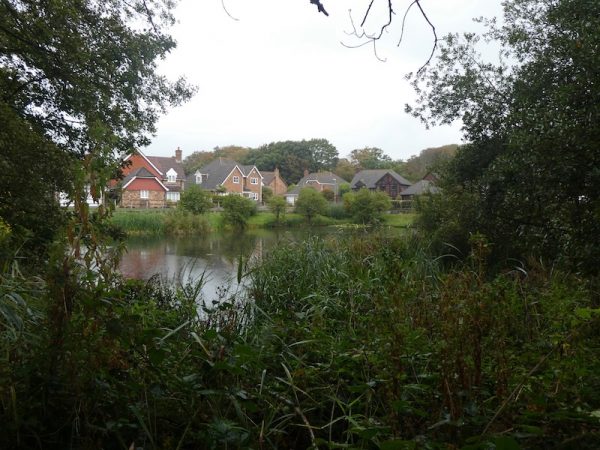 On reaching Kivernell Road we turn left and follow the road to the junction with Park Lane where we turn right and continue uphill to pass the grand looking Beach House public house, it is raining again so we decide to press on and soon re-join the coastal path this time heading east.

From here we plan to retrace our steps back along the coastal path, however, along with the rain has come high winds and after passing Hordle Cliff we decide it might be sensible to get away from the cliff edge.  We take a footpath heading inland to reach the B3058.  We soon find that walking besides this road is more hazardous than walking along the cliff edge, so at the next footpath on the left we head back across the golf course to reach the coastal path and follow this back to our car.

Despite the weather we have had an interesting walk covering 13 miles.  If you are going to follow this route I advise you to stay on the coastal path and not to follow our return route via the section on the B3058.