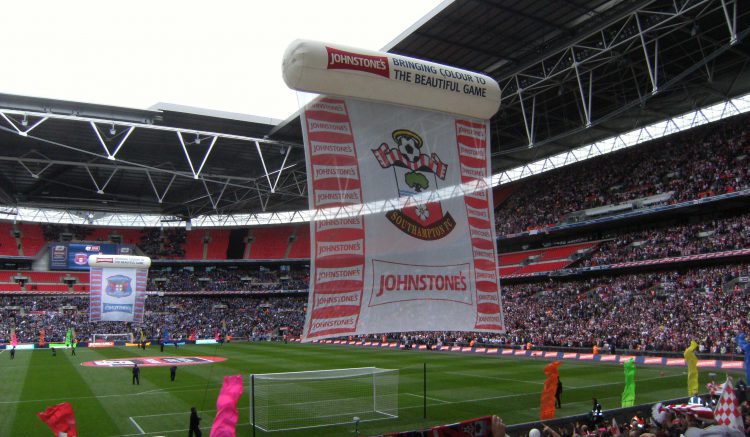 Saturday arrives and for me that means a trip to Southampton to watch the Saints. Lyn has arranged to meet Lolly in Farnham and Dexter and Crosby have not been invited, they will stay in Pitton at my father’s home, whilst Bob and I go to football.

Dad and I have been going to football together for fifty years. In the sixties it was off to the Dell. Initially I would have to be hoisted up to see the game, as I grew I stood on a stool to get a view. In the era of standing at football matches you used to see nippers carrying a stool to the game, clad in a warm coat with scarf and bobble hat. Nowadays they are more likely to be carrying a mobile phone and wearing an expensive replica shirt.

Home game days were always special. Dad comes from Southampton, born in St Mary’s, he was and still is passionate about his home town team. In our house football was for men (and boys), Mum and my sister, Sarah, would be allowed to accompany us in the car but then went shopping for the afternoon. After the game we would meet up, if I was lucky I would get ‘The Pink’ which would enable me to read all about the game I had just watched. That and my match day programme would be my reading material for the next fortnight.

Sometimes after the game we would visit relatives. Going to see Uncle Jim and Auntie Marie was a treat. Jim, Dad’s eldest brother, also a Saints season ticket holder, was a warm friendly man who enjoyed talking about the game. Auntie Marie, Jim’s wife was a lovely lady always offering tea and cake. For a while my Grandfather lived with Jim and Marie so it was always good to see him, he loved sport and was keen to hear about the match.

Other times we visited Dad’s younger brother Les and his wife Ursula. Fun and laughter followed Les around. We often stayed late, later than we would normally be allowed to stay up. Les always willing to mess about and keep us amused.

In the seventies Dad recruited more of his mates from the village to come to the Dell. His best mate Jack, along with his two sons Bill and Maff (my muckers) and Dad’s other good friends John and Arthur were regulars. Dad and John still go together and they are my travelling companions today.

When you are brought up with football, as I was, and support a team that you have some connection with then it stays with you all your life. I am fortunate that Lyn likes football, as do our children. At one stage all four of us had season tickets and also travelled to many away games. Almost twenty years later Lolly still talks about the trip that we had to West Ham with my mucker Willy. Ben is travelling the world but a common feature of our skype calls is a discussion on how Saints are doing.

The common bond of the game is also something special. The guys I sit with at St Mary’s I met at the Dell in the late 1980’s. Twenty-five years of friendship that is based on conversations over a pint before a game and the odd word during the match.

There were times, when Saints were going through a succession of poor managers and performances were disappointing, that the only thing that stopped me from finding something else to do on a Saturday afternoon was the fact that I would lose contact with these guys and the other friends I have made through football.

Paula, who has commented on earlier blogs, is a Saint she sits a couple of seats along from me and when Lyn went they sat next to each other. Andy, the IT wizard that set up this blog is a Saint and we briefly catch up before today’s match.

I have been fortunate to watch some great Saints players. Matt Le Tissier was special, as was Mick Channon and Ron Davies. Today, in my opinion, Adam Lallana is the star. I would need a book to write about the players that I have enjoyed watching turn out in Red and White stripes.

In recent years I have been fortunate to become friends with another ‘Saint’ who lives in our village. Stuart is a couple of years older then me, it turns out that we watched many of the same games and spend hours over a beer or glass of wine talking about the merits of past players.

So the match is slightly incidental, it is the reason for going but not the main purpose. Today disappointingly they lose. But the memory of the match will soon be dispatched to the ‘do not retrieve’ part of the footballing brain, whereas the enjoyment and camaraderie falls into the ‘well worth going’ category.