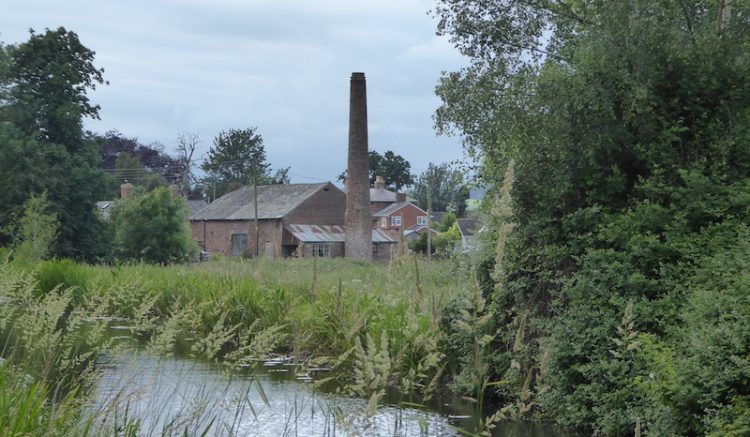 After my walk this morning with Lynnie and the dogs I am heading off on a walk on my own, this is unusual but it is going to be a hot afternoon and I plan to walk a few lengthy sections on tarmac country lanes and I don’t want Crosby burning his paws.

The starting point for my walk is the Canal and River Trust car park at Queens Head (Grid Reference SJ338267). Leaving the car park I walk up to the road and turn right to cross the Montgomery canal and then turn right to join the towpath and almost immediately go under the A5. Soon the sound of road traffic is behind me and it becomes very tranquil. 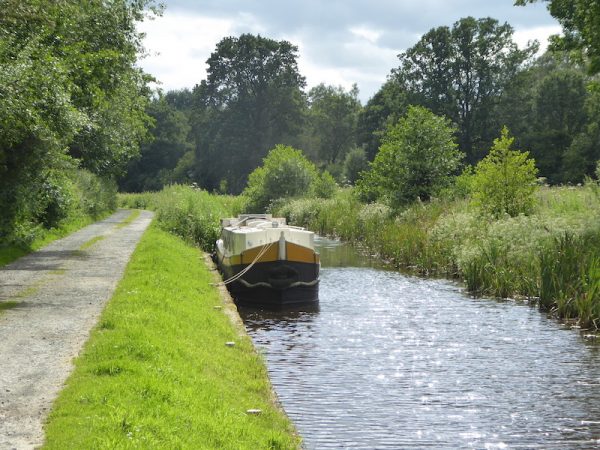 On our travels I have walked along a number of canals, but this is the first time I have visited the Montgomery Canal, apparently unlike most canals, which were built for industrial purposes this one was designed to serve the rural community. The costs of construction were covered by local farmers who were keen to use the waterway to transport limestone to make the agricultural land more fertile.

The canal route was 33 miles between Frampton Junction and Newton. Work on its construction started in 1793 and was finally completed in 1821. It was used until 1936 and finally abandoned in 1944.

There were twenty-six locks on the route the first of these I reach now, Aston Top Lock; this is the first in the series of three Aston Locks. 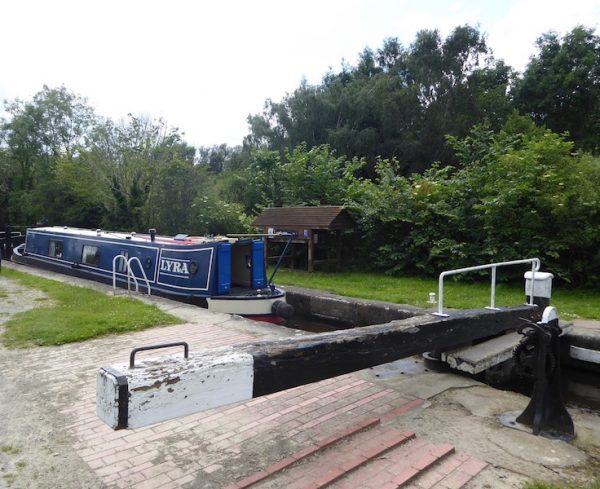 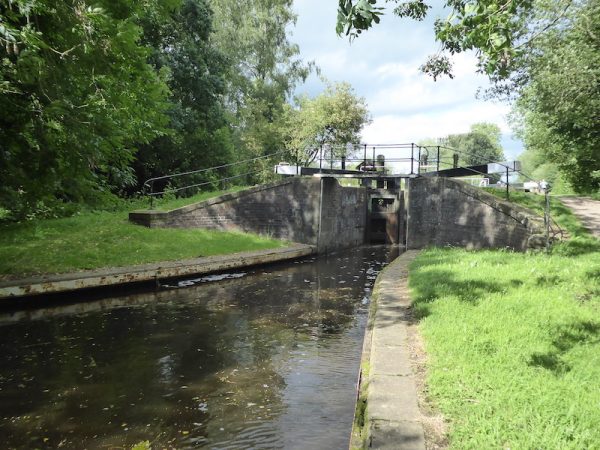 I enjoy walking along canal towpaths, they often go through attractive countryside. This one is no exception. 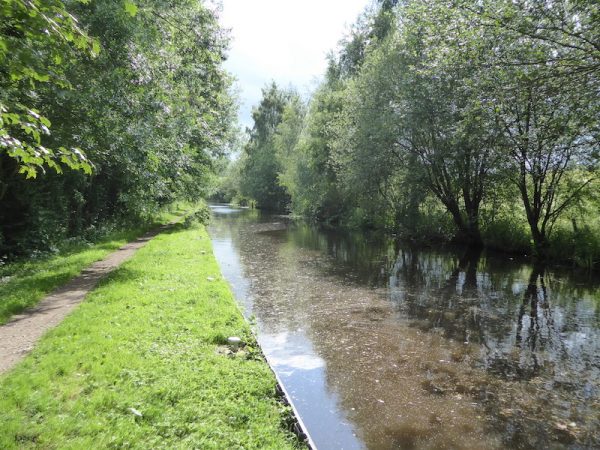 After passing the locks I reach Red Bridge (No. 77). 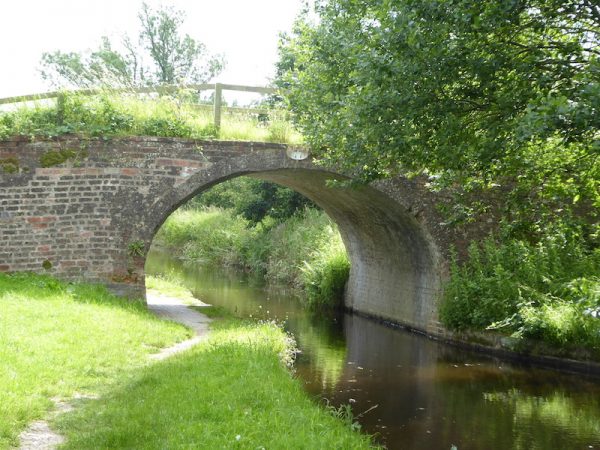 The next bridge is Park Mill Bridge (No.78) this is a different style from the previous bridge. 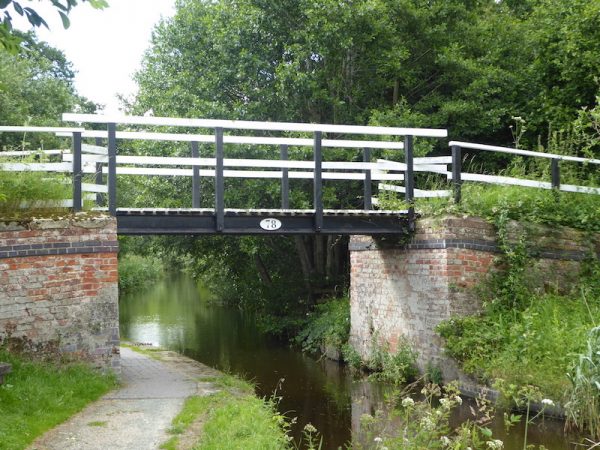 As I head towards Maesbury Marsh I reach a milepost indicating it is 6 miles to Welsh Frankton and 29 miles to Newtown. 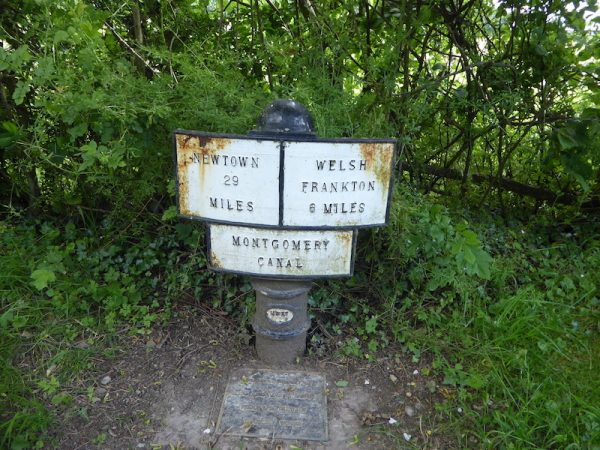 Jon reaching the village of Maesbury Marsh.  I leave the canal at Maesbury Marsh Bridge (No.79) located alongside the Navigation Inn. 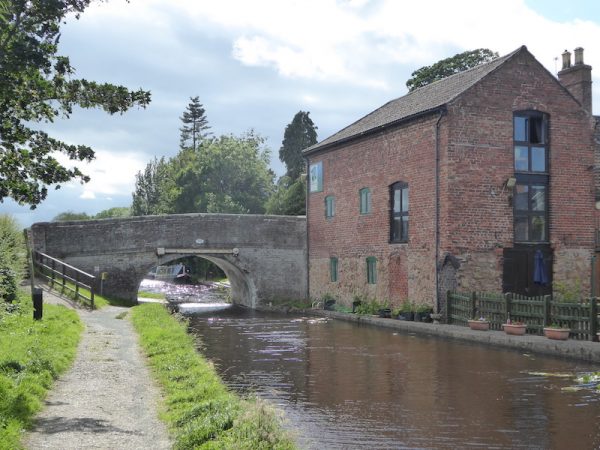 On reaching the road I turn left and walk through the village along Main Road. After leaving the edge of the village the road heads uphill towards Woolston. 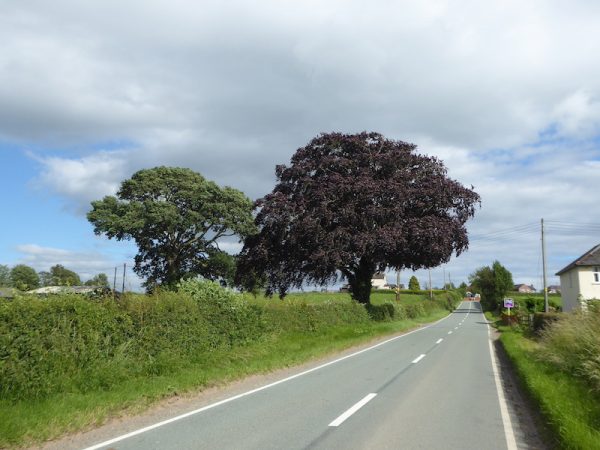 As I reach Woolston I take a left turn to walk along a minor road and at the next junction I turn right to follow a road signposted to Sandford and Shrewsbury. This road heads steadily uphill and just before a crossroads I take a quick diversion to walk along the edge of a field to reach a trig point at Bryn-y-wystyn. This is the 139th trig pillar I have bagged and it has taken a bit of searching for as it hides away in the hedge. 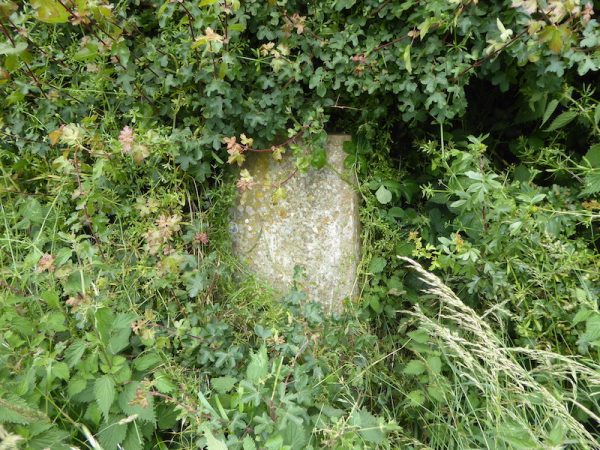 After bagging the trig I return along the hedge line to reach the road and turn right to reach a crossroads where I continue straight on along the road towards Sandford. Just before Sandford Hall I take a footpath on the right crossing an overgrown stile into a field, which I cross to enter a copse. 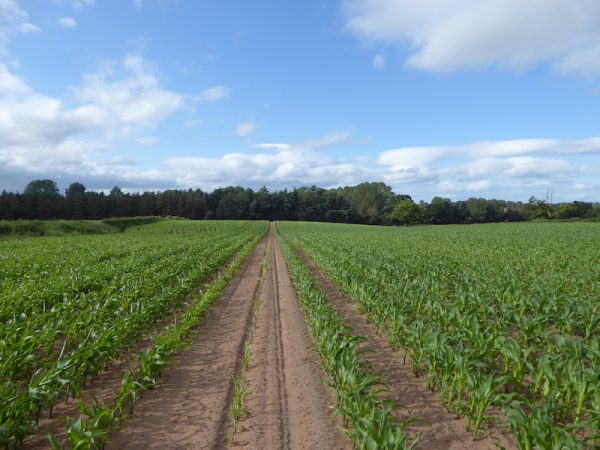 There is a stile and footpath sign entering the woods, but the path soon disappears. I wander around for a while but in the thick undergrowth can find no obvious sign of a path. Later back at the caravan I will get in touch with the Ramblers to report the lack of footpath here. Reluctantly I turn around and head back across the field to the road where I turn left and walk past Sandford Hall.

On reaching Sandford I turn left at a junction by Sandford Farm with its range of fine buildings. 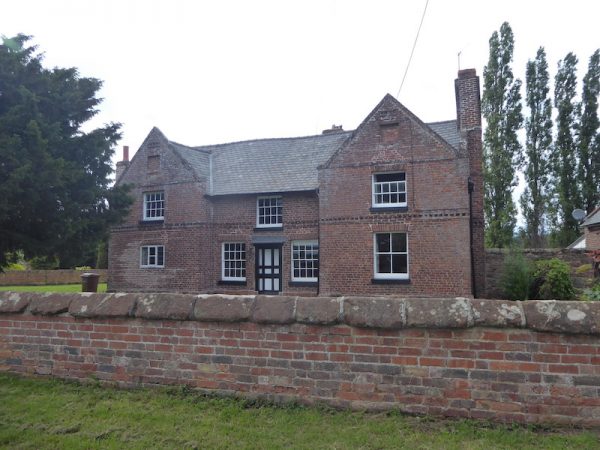 I continue along the road and reach the Weirbrook Congregational Church; this non-conformist chapel was built in 1910 and was used until 2002. The solid brick building replaced a tin tabernacle that opened in 1883. 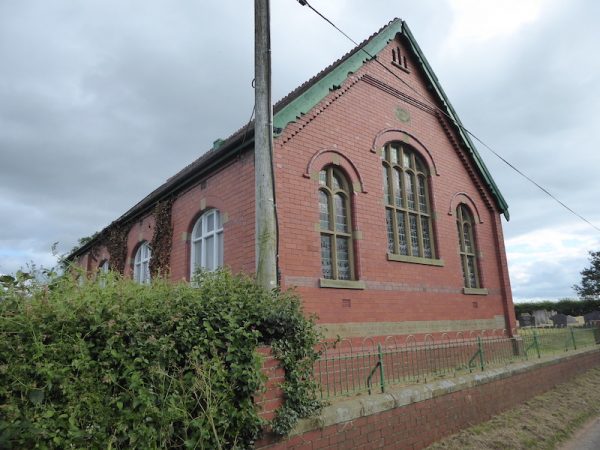 I stay on the road until just short of the A5 where I take a footpath on the left and cross a field. 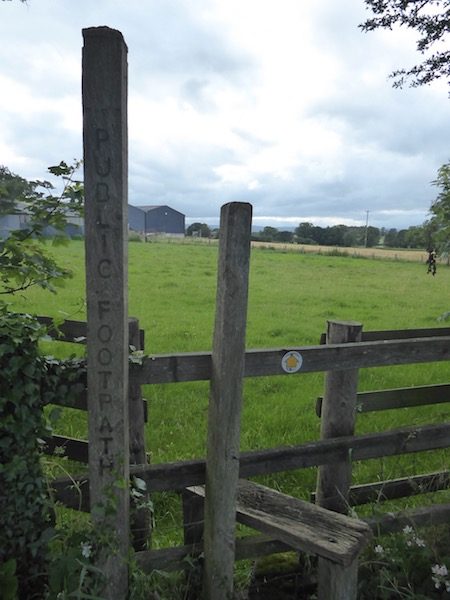 After the field I pass through a gate and the path becomes less clear so I walk around the edge of an arable field and then turn right on the path which goes along the hedge line. I reach a point where the path should cross into another field but it is overgrown with nettles so I spend a while beating a path with my walking pole.

After entering a field of pasture I walk a short distance to cross a stream and then enter an arable field with a clearly defined path. As I walk along I ponder why some landowners make it so difficult for walkers, whereas their neighbours are really considerate. 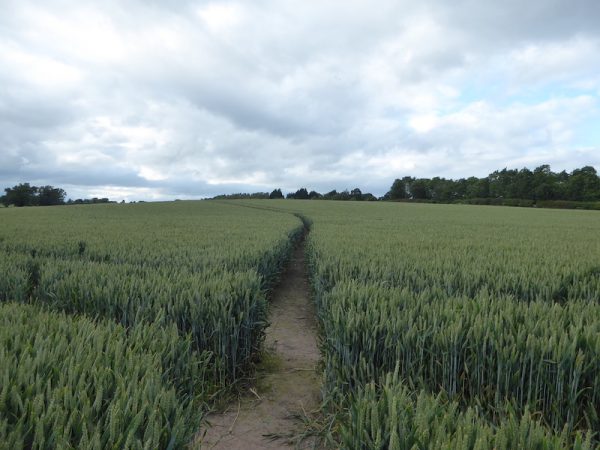 On reaching a road I turn right and follow a lane to a bridge over the A5 leading into a housing estate on the edge of West Felton. At a crossroads I turn left and walk along the pavement through the village to pass the War memorial. 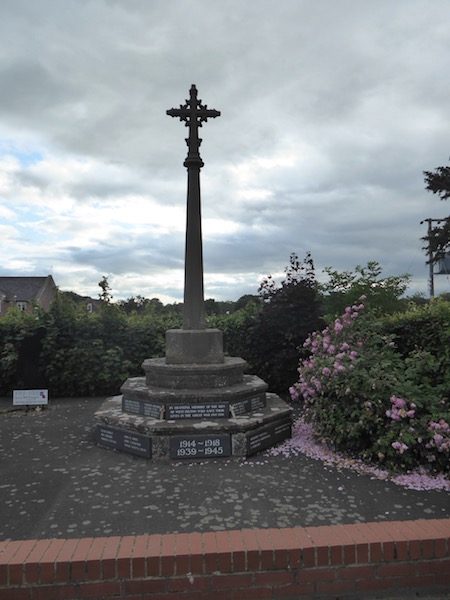 Carrying on along the pavement I go through the village and then stay on the pavement all the way to Queens Head. On reaching the pub bearing the same name as the village I am tempted to stop for a sharp’ner. However, I’m conscious that my difficulties following some of the footpaths has caused my walk to take longer than anticipated and I should be heading back to Lynnie and the dogs. 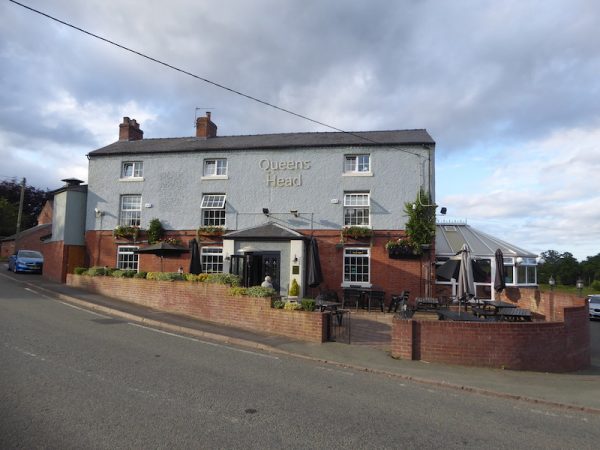 Back at the car my walk has covered just over eight miles, the section along the Montgomery Canal was very attractive, but the rest was mainly on roads and it has been frustrating that some of the footpaths were impassable.