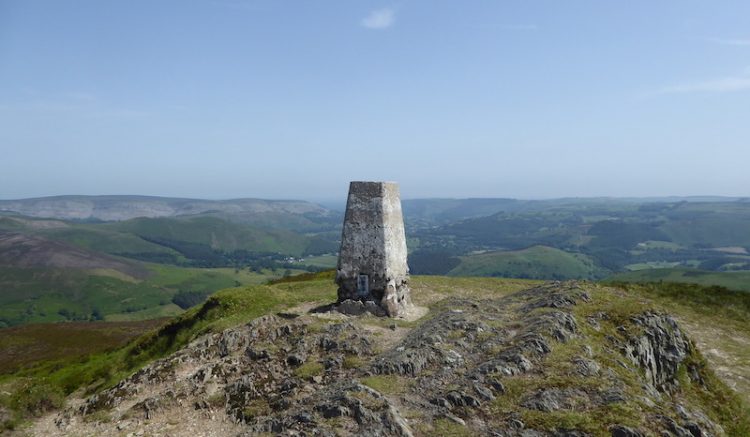 Whilst staying at Domo CL in July of last year I did a cracking walk up the Llantysilio Mountain from the Horseshoe Falls in Berwyn, as I am walking on my own today I decide to venture there again.  It is a warm day and walking up mountains is beyond Dexter these days so he and Lynnie are in for a relaxing day on the caravan site.

I head towards Llangollen again, this time driving through the town on the A5 then at Berwyn taking a right turn signposted to Ruthin and the Horseshoe Pass.  After crossing the River Dee I park in the car park for the Horseshoe Falls.

Starting my walk I leave the car park, passing the toilet block and then going through a metal gate to join the path that runs across the top of the field with the Horseshoe Falls down to my left.  Being a sunny day there are plenty of people around the falls so I decide to keep going and take a closer look on the way back. 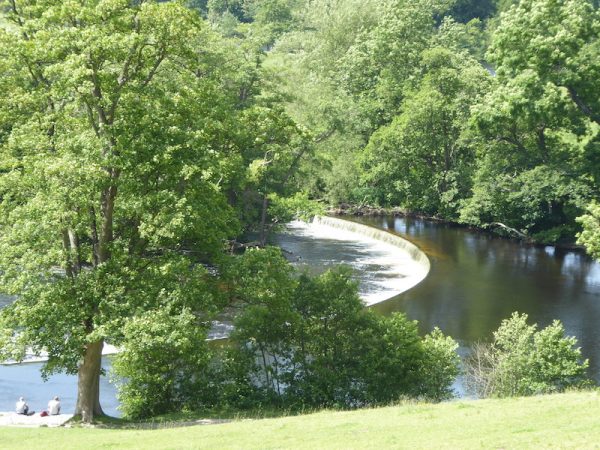 The path runs close to the road and soon reaches Llantysilio Church; an information board explains that the church was probably built in the 15thcentury whilst some parts possibly date from earlier.  Apparently inside the church there are plaques to the poet Robert Browning and also the actress Helena Faucit (Lady Martin) who lived at nearby Bryntysilio Hall. 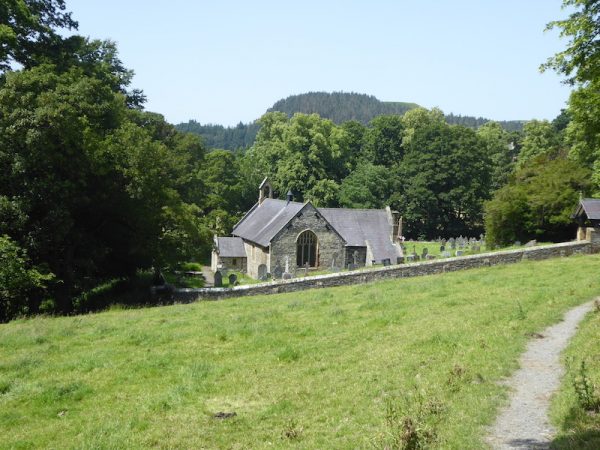 At the church I join the road and soon pass the gated entrance to Llantysilio Hall and then continue on at the junction just after Llantysilio Farm.  On entering Llantysilio I turn right up a lane by the former school which closed in 2010 after seven of its ten pupils moved to senior school.  It is sad to see rural schools closing, but it is amazing that it survived with just ten pupils. 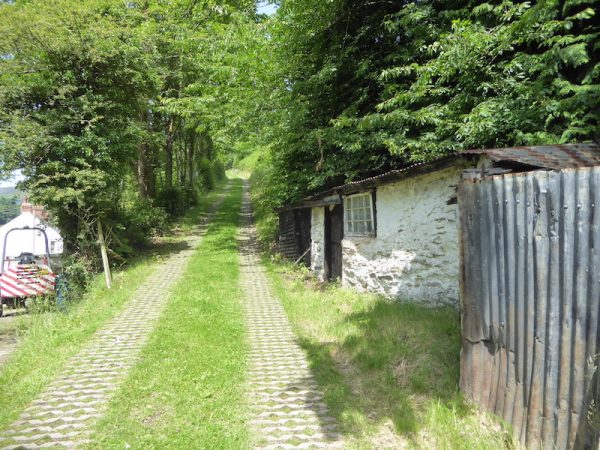 I leave the single-track road at a fork to join a footpath along a steep uphill track from where I get cracking views of the Llantysilio Mountain. 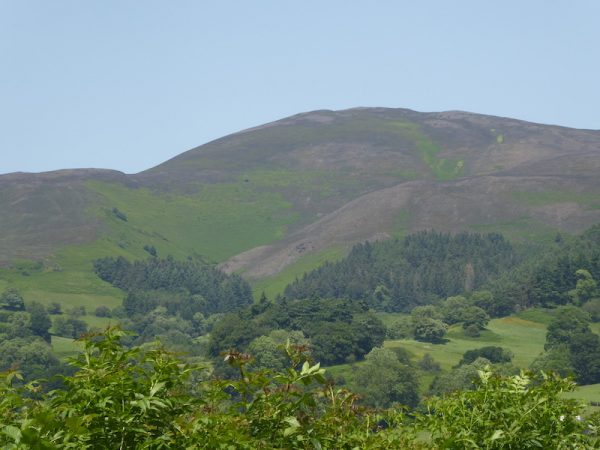 The path continues uphill through a gate and onto the edge of moorland covered with thick bracken.  Occasionally a sheep pops its head up to observe us walking by.  It is becoming very warm and humid so I stop to admire the views over the River Dee. 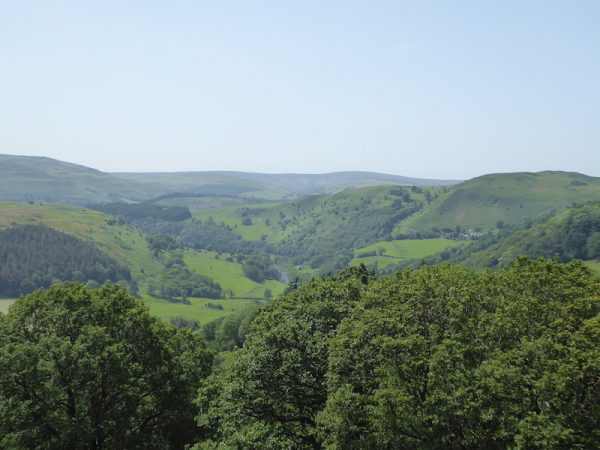 There are various paths through the bracken, but I keep to the main path continuing uphill to reach the spoil from the Berwyn Slate Quarry. 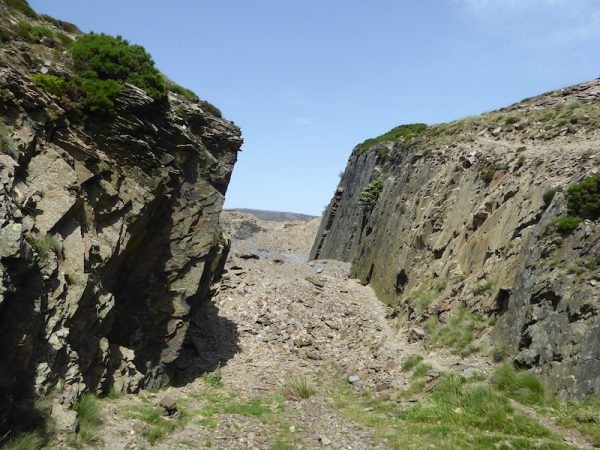 There is a network of paths at this point, I take a northwesterly one around the edge of the quarry before going across moorland to ford a stream and then continue on to traverse the side of the mountain. 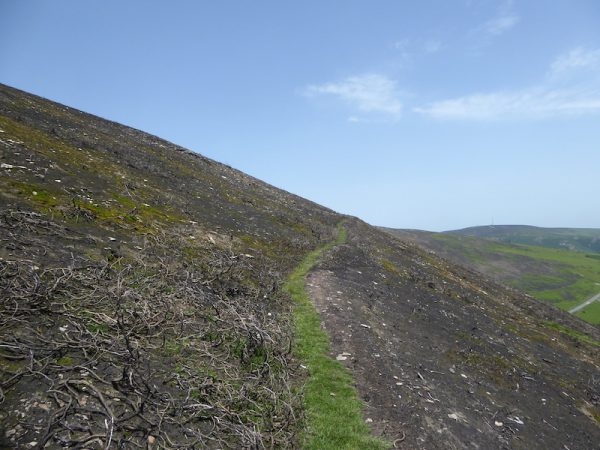 Down to my left there are fine views over the quarry and the road known as the Horseshoe Pass. 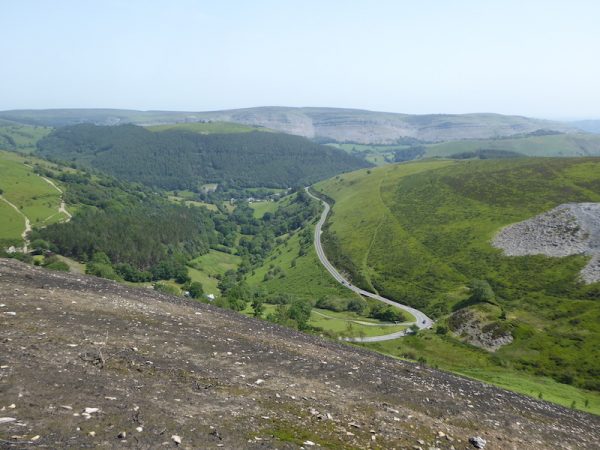 The clear path now continues across the moor to join a stony track in the dip between the tops of Moel Y Faen and Moel y Gamelin, here I turn left and start the ascent towards the summit of Moel y Gamelin. 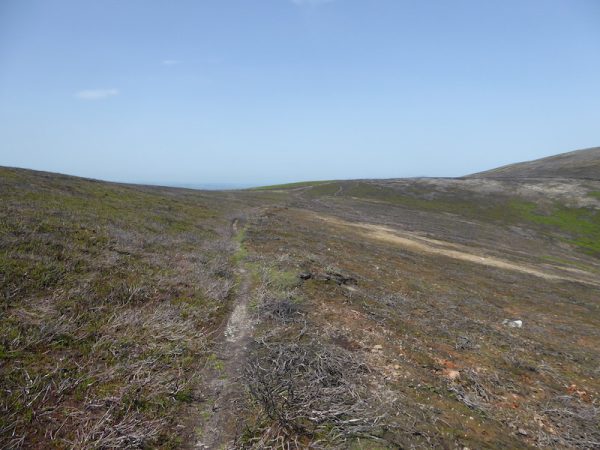 On reaching the summit I stop at the cairn to take in the views.  I am 1,653 feet above sea level and there is a strong wind blowing up here today. 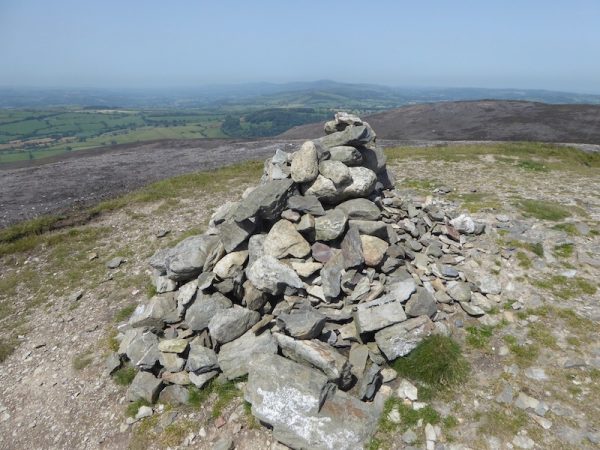 I now go southwesterly on a clearly defined path along the ridge.  It looks straightforward, but this is a rollercoaster of a path with many false summits before I eventually reach Moel Morfydd. 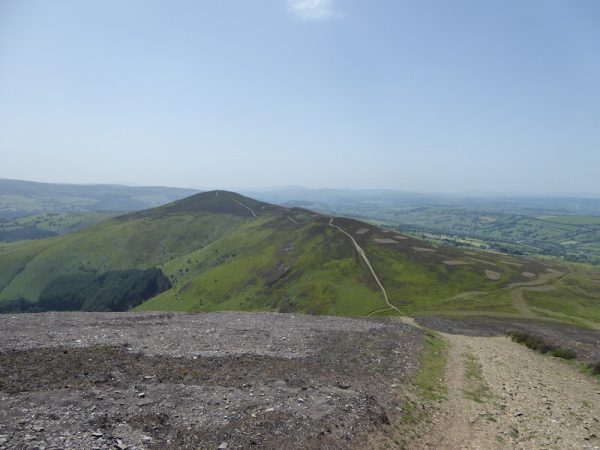 It is a cracking day but despite this I only meet one other person walking along the top of the Llantysilio Mountain towards Moel Morfydd. 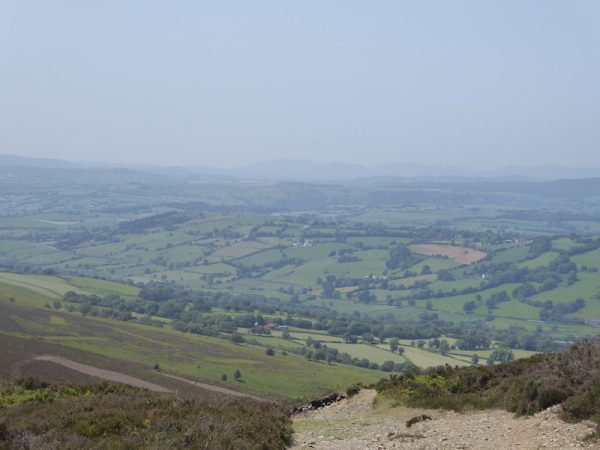 Eventually I make the final ascent to Moel Morfydd where the trig point has been seriously eroded by the weather conditions. 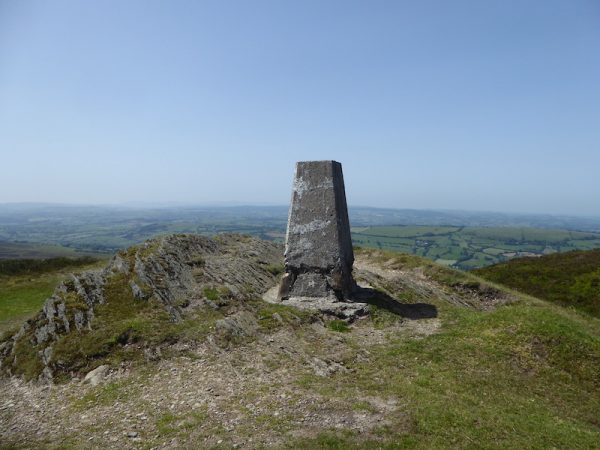 I have previously bagged this trig; it really is a stunning spot. 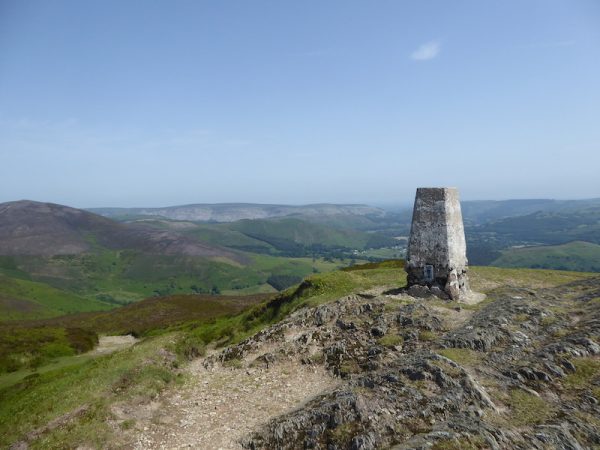 I continue by walking southwest descending steeply from the summit to reach a crossing of paths where I turn left towards Mynydd-bychan. 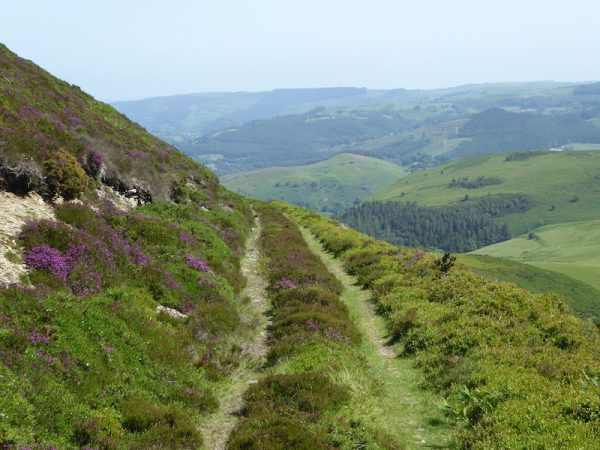 There are a number of paths leading from this path but I keep on it until the junction with the Dee Valley Way.  Here I turn left to follow the Dee Valley way-markers towards Cymmo. 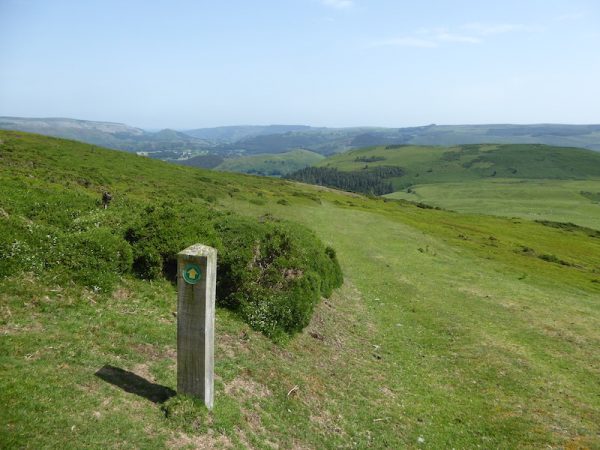 The path soon becomes a tree-lined track with an amazing dead tree stump in the middle of the pathway. 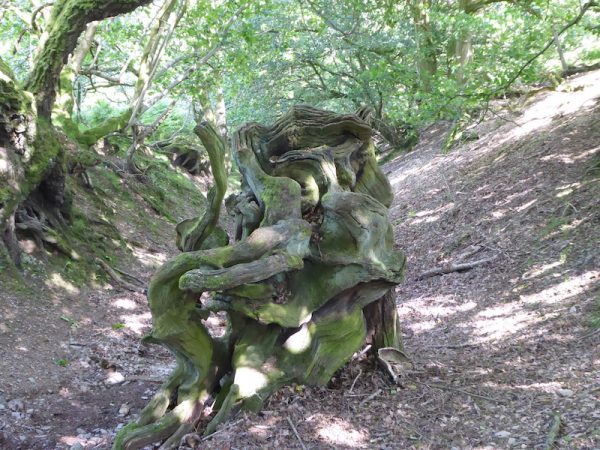 The track continues downhill through the trees to eventually join a tarmac lane.  I now follow the lane past a few cottages and the remote Sun Inn at Rhewl.  It is tempting to stop for a pint, but I still have a little way to go. 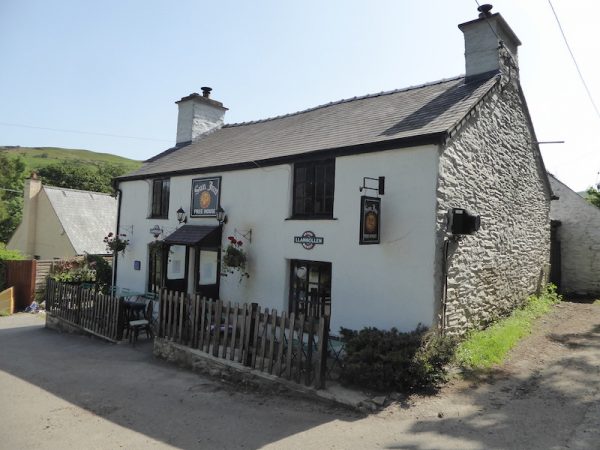 Further along the lane I pass the Hebron Methodist Chapel, originally built in 1826 and then rebuilt in 1845 and 1903. 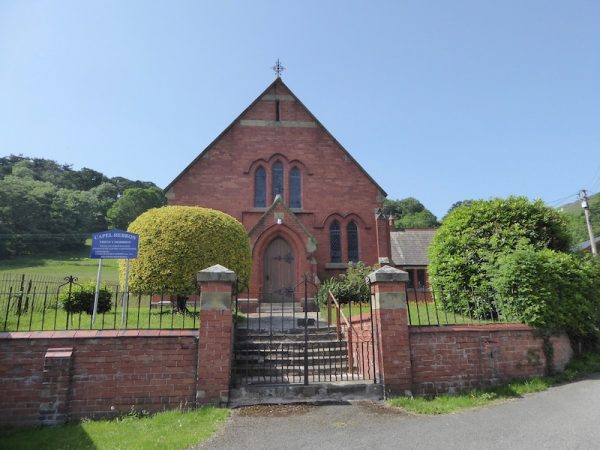 My route continues along the road through Rhewl to Llantysilio where I retrace my steps to Llantysilio Church.  At the church I follow the path down to the River Dee to take a closer look at the Horseshoe Falls.  This is a cracking spot with significant industrial history. 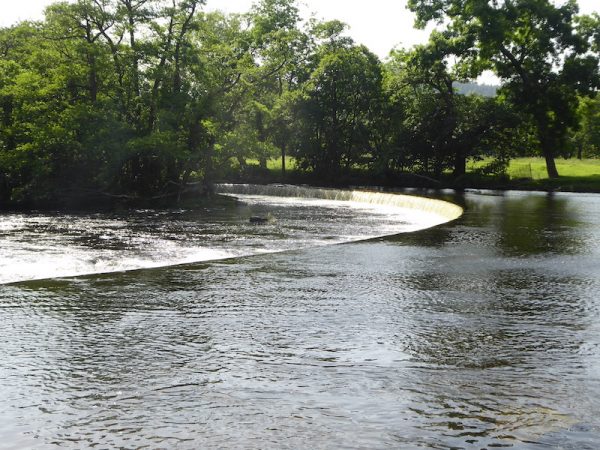 The falls are a weir designed by Thomas Telford and completed in 1808 to ensure a constant water supply to feed the Llangollen Canal, a feeder canal supplying water to the Ellesmere Canal beyond Pontcysyllte.  The weir is 460 feet long and an impressive sight even with the current low water levels. It is not surprising that along with the canal it has been designated a World Heritage Site. 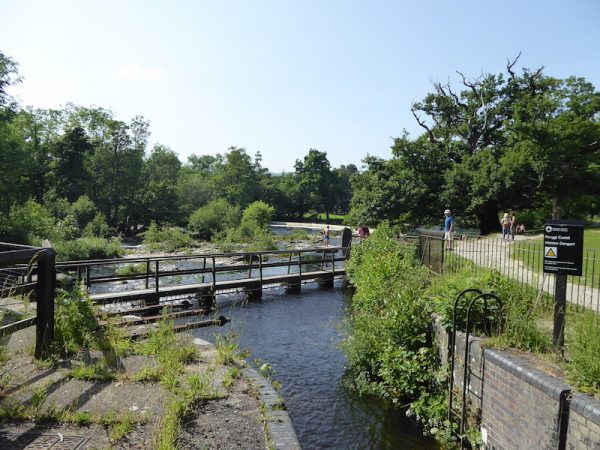 On this hot afternoon it is a popular location with people sat beside and in the water.  I follow the path to reach the start of the Llangollen Canal and then walk besides the canal to reach the Chainbridge Hotel.  I walk in front of the hotel to reach the chain bridge. 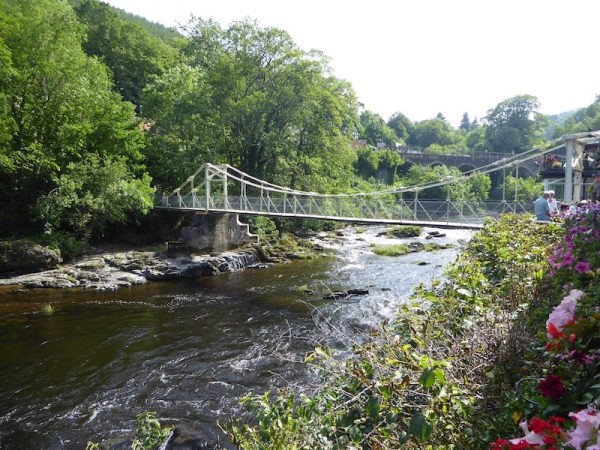 The is the third chain bridge to stand on this site.  The first was built in 1818 by Exuperius Pickering to transport coal, lime, stone from the canal to the road on the opposite side f the River Dee.  The bridge meant that Pickering avoided paying toll fees on the Llangollen Bridge. 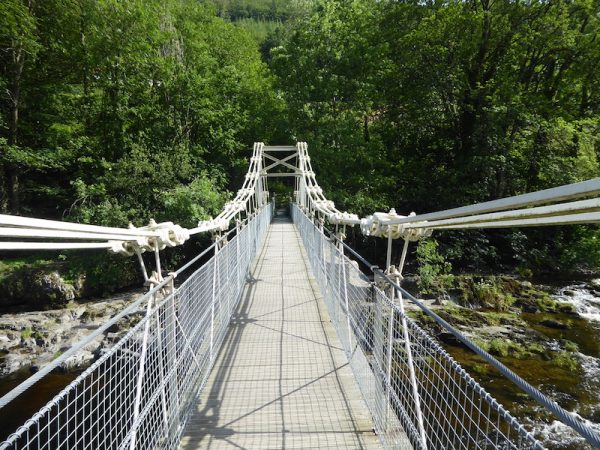 In 1870 Pickering’s chain bridge was refurbished by Sir Henry Robertson the owner of the nearby Brymo Steel Works.  However disaster struck in 1928 when heavy rain and fallen trees on the river led to the water level rising to four feet above the bridge. This is amazing given how far below the bridge the river is flowing today.  Unsurprisingly the bridge collapsed. 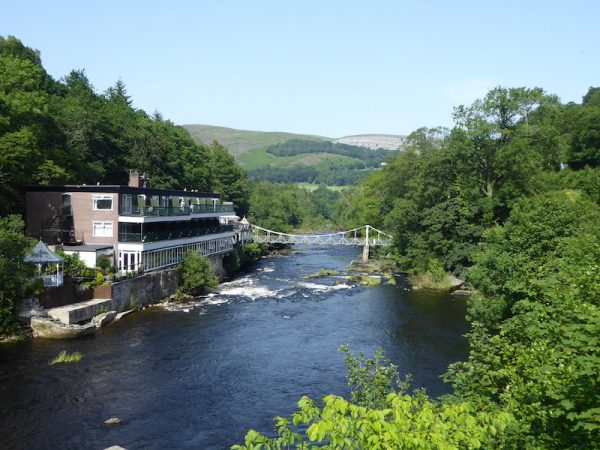 After the disaster Robertson’s son also called Henry rebuilt the chainbridge this time as a passenger route.  In 2015 it was given a full overhaul and is now a magnificent spot to visit. 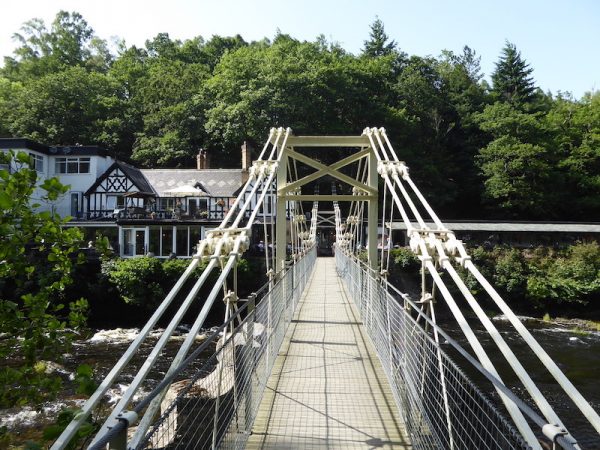 Having crossed the bridge I walk up to Berwyn railway Station.  Opening in 1865 this station originally formed part of the line between Ruabon and Barmouth and was operated by Great Western Railways.  After being closed in 1965, as part of the Beeching cuts, it was re-opened by the Llangollen Heritage Railway in 1986. 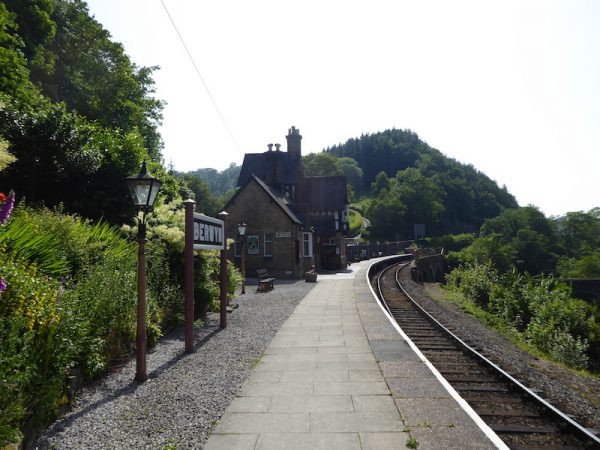 From here I briefly walk besides the A5 before turning right and heading under the railway line to cross the road bridge and return to the car park.

Crosby and I have covered nine miles but it has taken quite a while over the tough terrain.  We are both ready to head back to the caravan to rest and catch up with Lynnie and Dexter.