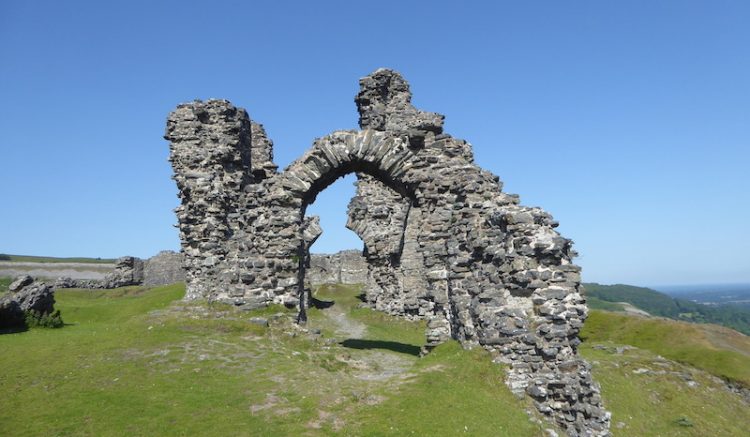 We were last away in the caravan in early May so it is almost eight weeks since we last hitched up and set off.  A lot has happened in those few weeks.  We have been to two family weddings, including the marriage of our daughter Lolly to our new son-in-law Toby; our son Ben has been home to stay from Norway for ten days, we have finally made our choices on a new kitchen and I have a new tow car.

So this is the first trip away towing the Coachman with my SsangYong Rexton.  I have been thinking of changing the car for a while and having explored all the options decided not to pay the premium that comes with a Landrover badge, instead I have a fully kitted out car capable of towing 3.5 tonnes. 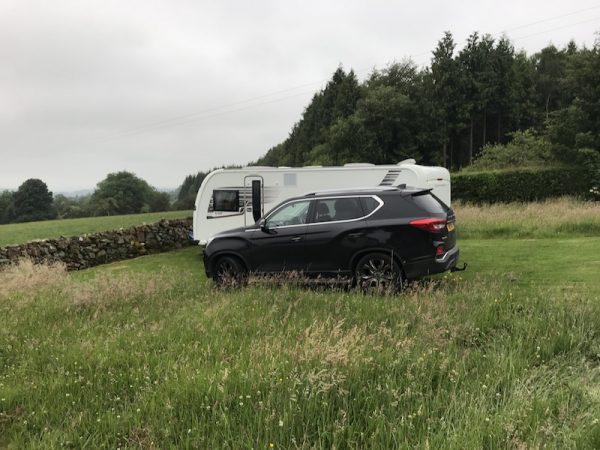 My first tow with the Rexton is the 180-mile journey to Oswestry to reach Domo CL, this is a site I stayed at last June with Crosby, on that occasion Lynnie stayed home so more work could be done on the house.  I had an enjoyable stay until Crosby sustained an injury whilst out walking which cut short my trip.  The site owners Chris and Sharron were incredibly accommodating and I promised to return again with Lynnie, so when we made plans for this summer’s travel this site was top of the list.

After setting up yesterday we went for a short walk around the Old Racecourse that is immediately accessible from the site. 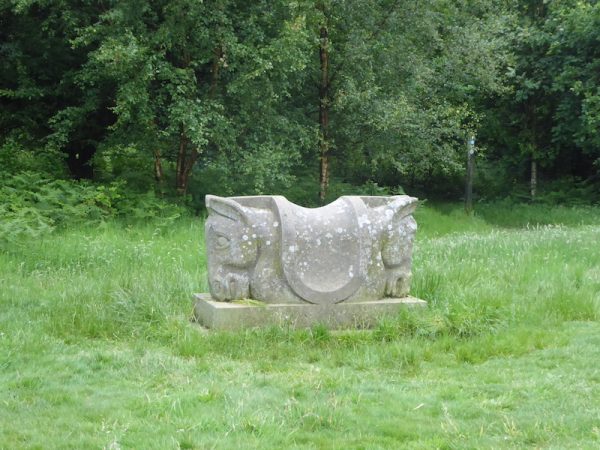 Today we take the drive across the border into Wales to reach the attractive town of Llangollen which sits besides the River Dee.  We cross the river and turn right along Mill Lane and then use the car park on the right. Our walk starts by following the path besides the river back towards the bridge.

After going up some steps we reach Mill Lane and cross the road by the Bridge End pub and then take the road, Wharf Hill, to the right of the pub.  Following the signs we reach the Llangollen Canal and make a brief diversion so that Lynnie can see the horses that pull the pleasure barges along this section of the canal. 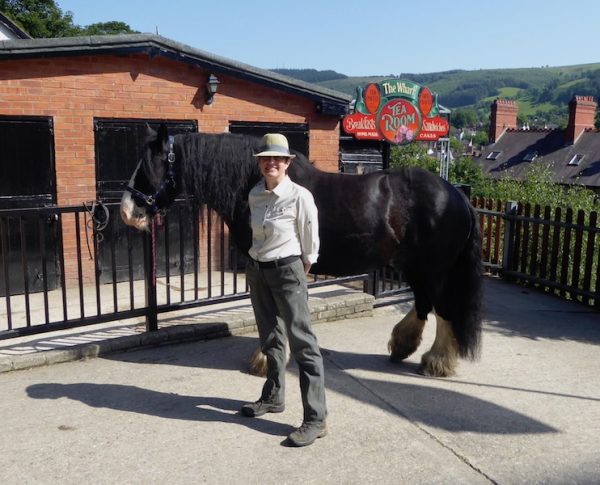 Returning to the bridge over the canal we cross to take a footpath directly opposite.  This leads besides a school and then skirts around a farm to join a track.  At a junction with a minor road we continue straight on heading uphill on a track that brings us to a kissing gate with a crow on the gatepost. 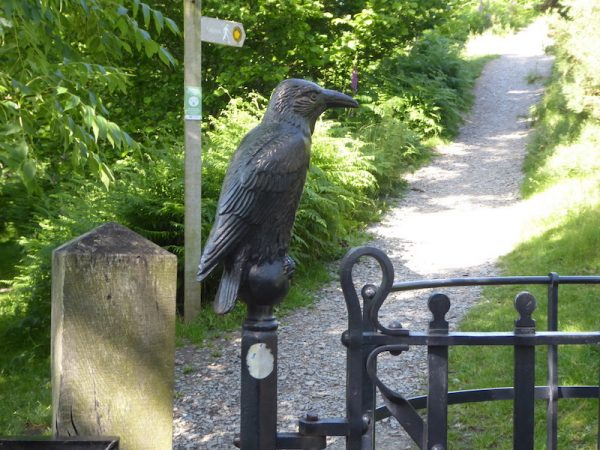 The route now climbs steadily up the hill towards Castell Dinas Bran. 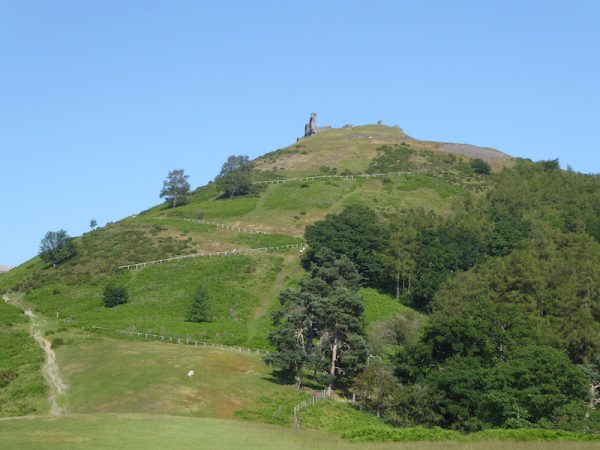 It is a warm afternoon and a long haul uphill for Dexter who these days struggles with the heat.  This does give us a good excuse to stop occasionally and appreciate the views towards the Llantysilio Mountains over to the west. 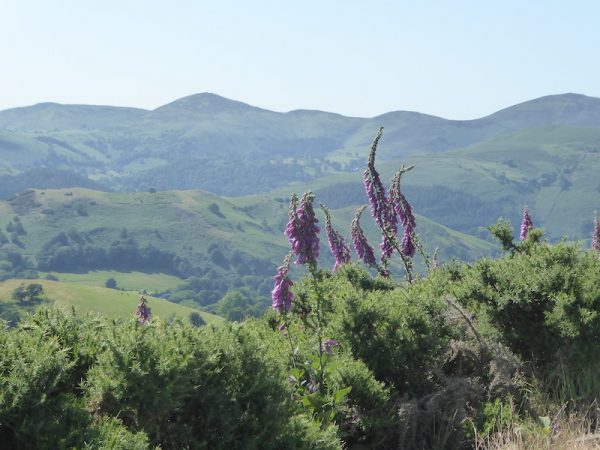 It is a relief to finally reach the top of the hill where the castle is located.  This medieval castle is thought to have been built in the 1260’s by Gruffydd II ap Madog, he was an ally of Prince Llywelyn ap Gruffudd Prince of Wales and the castle was built following the signing of the treaty of Montgomery which secured Wales for Llywelyn. 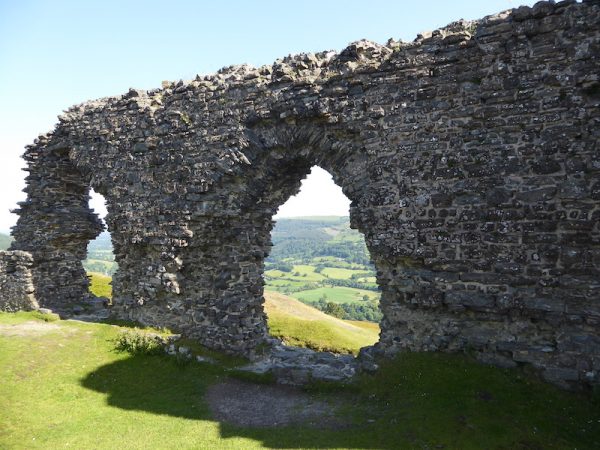 The castle had strategic importance and when in 1276 the peace between Llywelyn and Edward I failed war between England and Wales broke out. Edward dispatched Henry de Lacy, Earl of Lincoln to capture the castle but it had already been abandoned and set on fire, though not badly damaged. 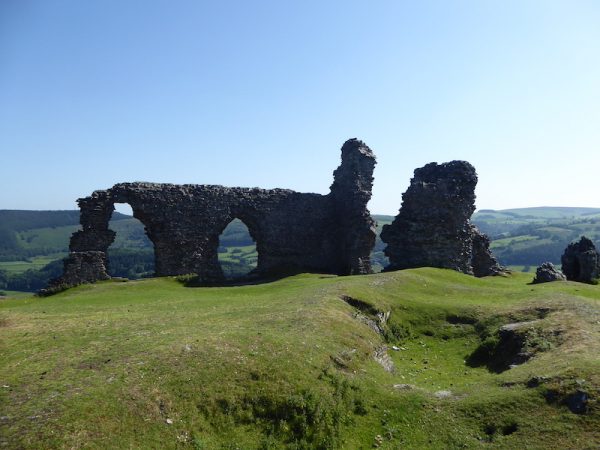 In 1277 Edward placed troops at the castle and it remained in his control until the next war with Wales, which commenced in 1282.  It is thought to have been recaptured by the Welsh before returning to English control. At the end of the war the castle was granted to John de Warenne, Earl of Surrey but he decided not to rebuild it and it has remained a ruin ever since. 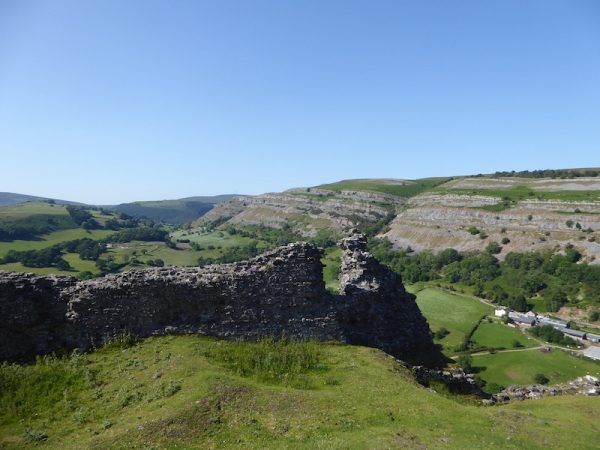 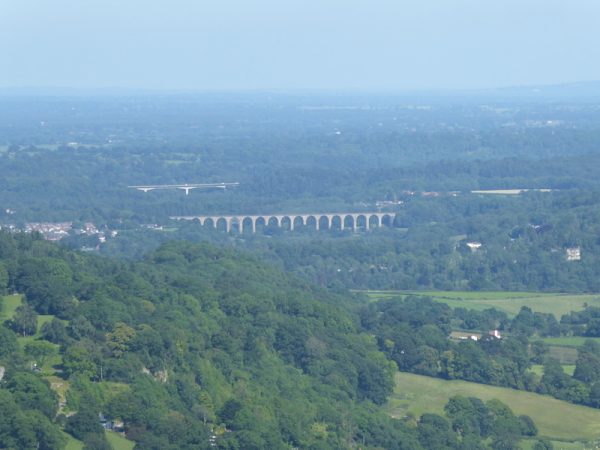 Our route is now down the footpath that makes the steep descent on the north eastern side of the castle. 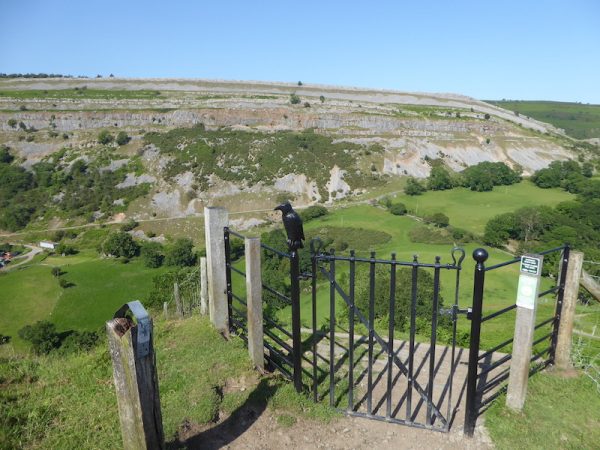 On reaching a minor road we turn left and within a few hundred yards after a cattle grid we turn right to join the road known as the Panorama Walk.  This route follows the road as it runs below the scar and provides some cracking views into the valley. 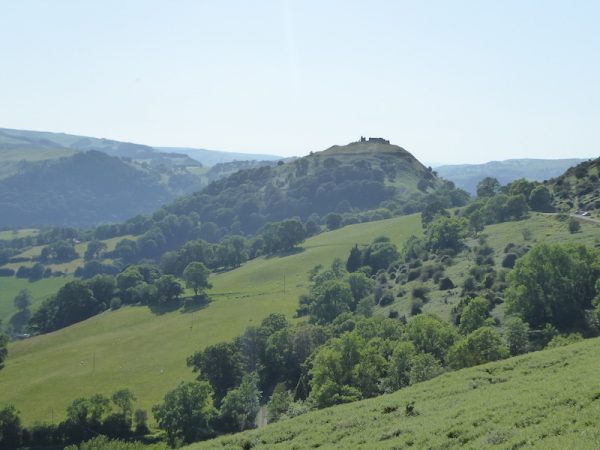 At a parking area on the right we leave the road to follow the route of the Offa’s Dyke Path as it heads downhill to pass through trees in Trevor Hall Wood which runs behind Trevor Hall.  Unfortunately there is no view of the splendid Hall from here. It is now a wedding venue and according to its website the current house was built in 1742 and had an interesting history with many different owners and tenants through the years. 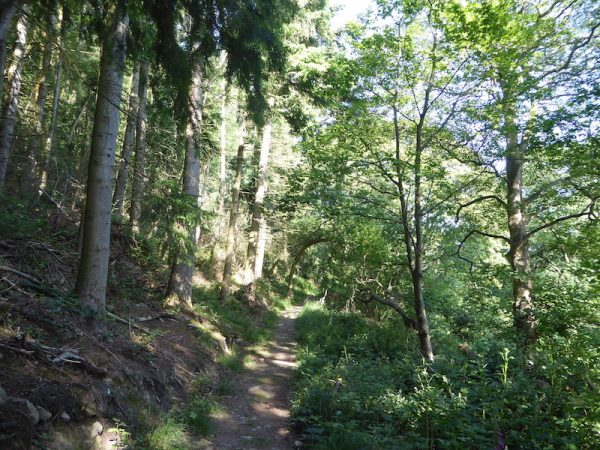 In 1956 a local timber merchant acquired it and applied to demolish it, after opposition it was saved and purchased by the Dudley branch of the Women’s Royal Voluntary Service.  They planned to convert it to a children’s home but in 1963 a major fire reduced it to a shell and a local farmer purchased it and used it as a cattle shed.  John Tree, a chartered surveyor, purchased it in 1987 and restored the property. 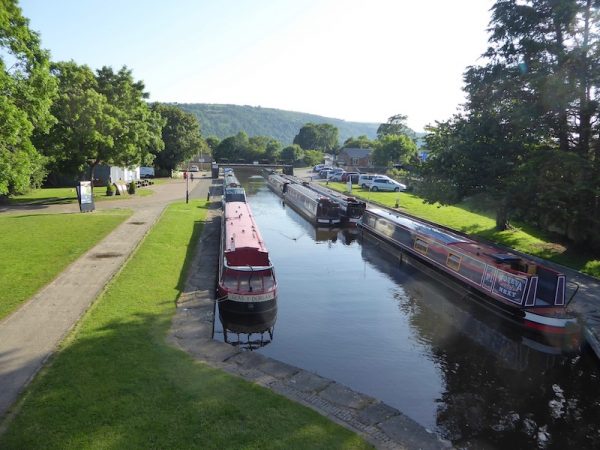 On reaching a road we turn left and follow the road to a junction where we turn right to cross the canal and then go right again through a car park to join the towpath and walk towards the northern end of the aqueduct. 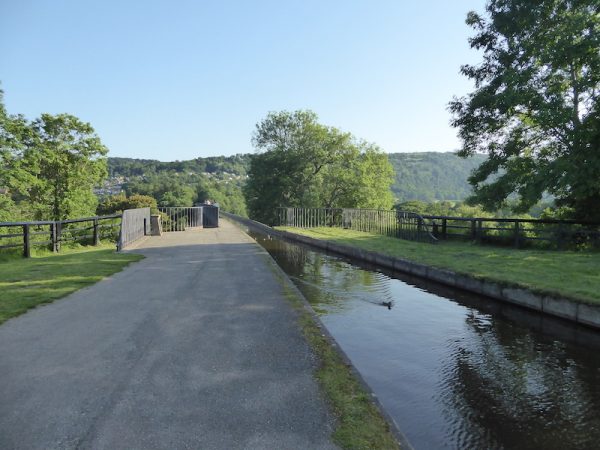 I know my vertigo will prevent me setting foot on the aqueduct so Lynnie heads off on her own to get a view over the parapet, meanwhile I view the stunning construction from what I consider to be safe ground. 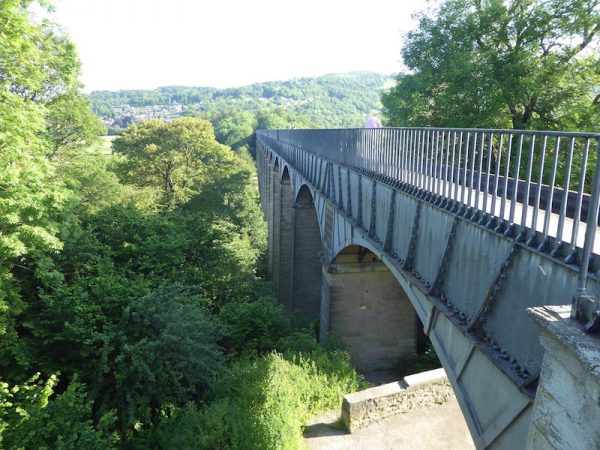 The eighteen, stone and cast iron arches of the aqueduct took Thomas Telford ten years from 1795 to design and build.  They cross 128 feet above the River Dee and are a stunning feet of engineering. 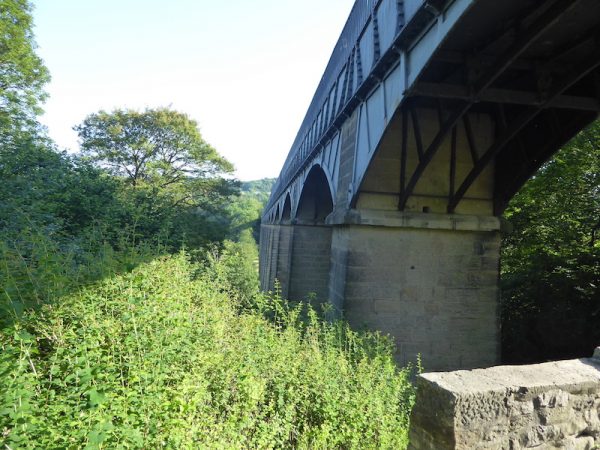 When Lynnie re-joins me we take a footpath, which leads under an arch of the aqueduct to reach a road on the far side where we turn left and walk back up to reach the canal basin. 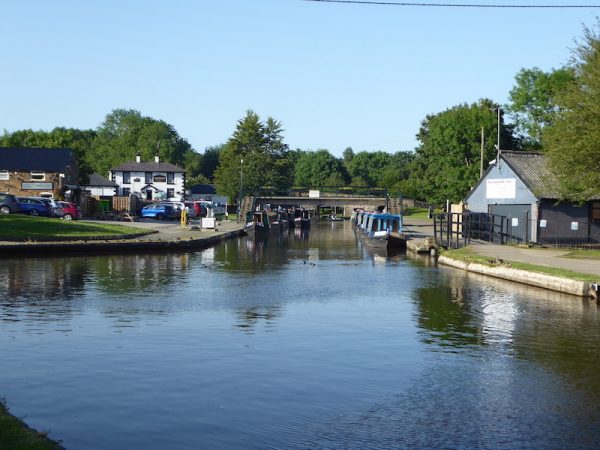 We then cross the bridge for the Llangollen Canal and start our return journey along the towpath back towards Llangollen. 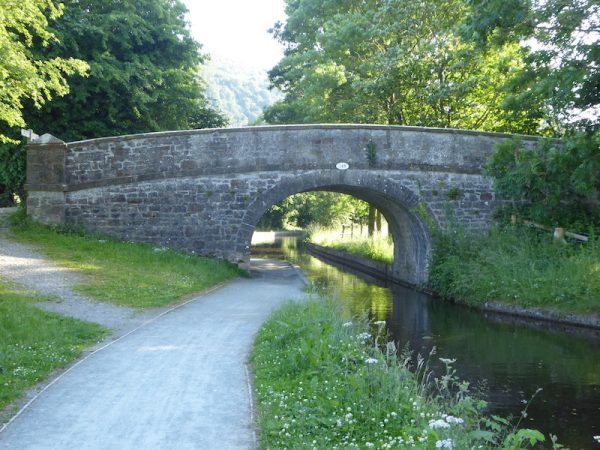 This canal was originally built as the Ellesmere Canal with the aim of connecting the River Mersey to the River Severn.  Work started in 1795 but was never completed.  The water source for the canal was to have been the River Dee at Wrexham, but the link was never made so the feeder was built from the River Dee at the Horseshoe Falls at Berwyn. 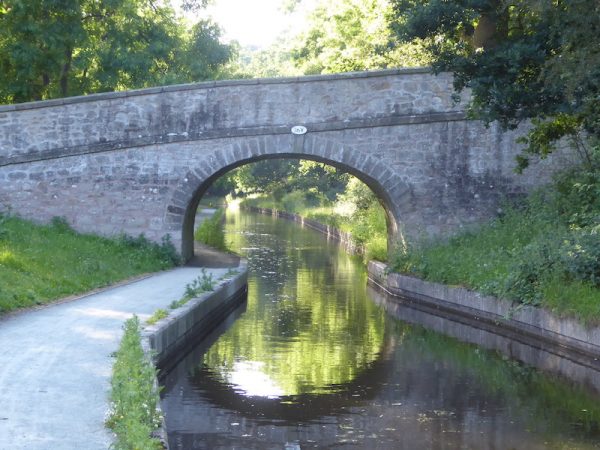 Like many other canals a railway company purchased it, maintenance was not their priority, resulting in it silting up and by 1937 traffic between Frankton and Llangollen had ceased.  Fortunately due to the strategic importance of this section in supplying water to the wider canal network it continued as a water supply.

The lack of maintenance had a disastrous effect when on 6thSeptember 1945 the canal breached its bank at Sun Bank Halt, a station between Llangollen and Trevor. Water cascaded from the canal and washed away the railway embankment further down the hill resulting in a crater 40 yards long and fifty feet deep. It caused a mail train with 16 carriages and two vans to crash killing one of the crew. 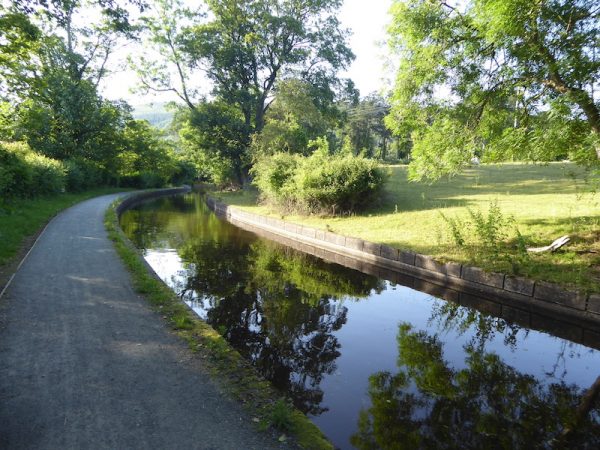 Because of the need for the water supply the canal was repaired and by 1954 was being used by pleasure boats.  There followed years of doubt about the canal’s future until it was placed under the control of the British Waterways Board in 1968. 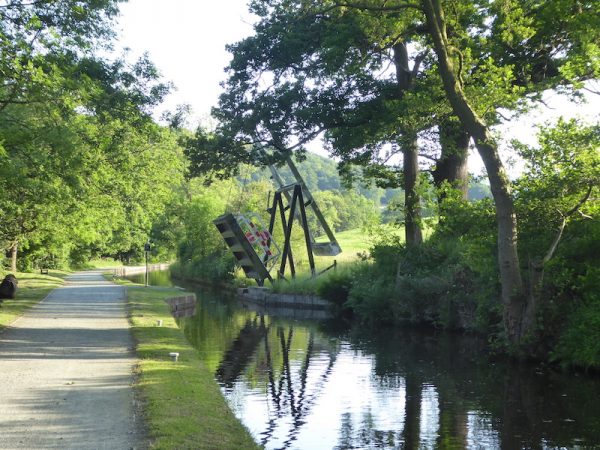 We stay on the canal towpath for about four miles and do not see a single lock.  It’s not that the ground is flat; it is a stunning bit of engineering by Thomas Telford.  As we near Llangollen a section narrows and is carved into the rock and must have taken some imagination and planning to construct. 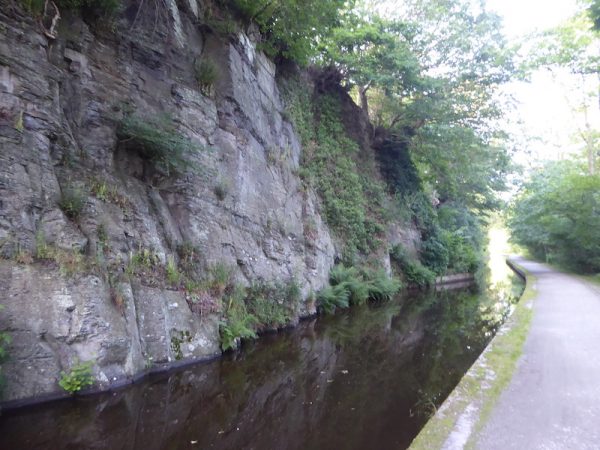 Eventually we arrive back at Llangollen Wharf. 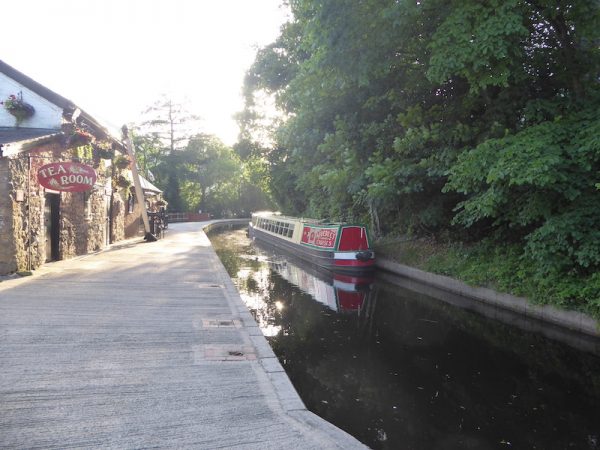 From here we retrace our steps back down into Llangollen and return to the car park.  Our walk has covered just short of ten miles, which is further than I had originally intended.  Tomorrow Crosby and I will probably be walking together whilst Dexter and Lynnie relax at the caravan.