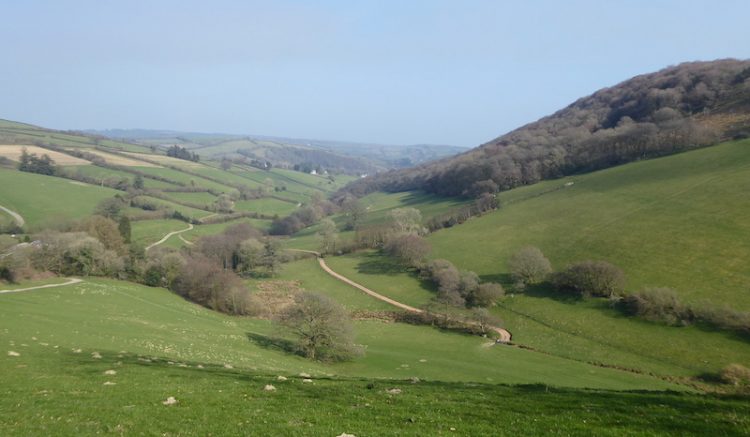 Earlier in the year I did a walk from Winsford up the Punchbowl, following in part a walk that Lynnie and I had done back in March 2016.  Seeing the pictures of my January walk Lynnie has requested we revisit the Punchbowl on this trip, I was more than happy to include the walk in our itinerary for this trip.

Our walk starts from the village car park opposite the garage; from here we cross the bridge and then turn right to go over the footbridge besides the ford. 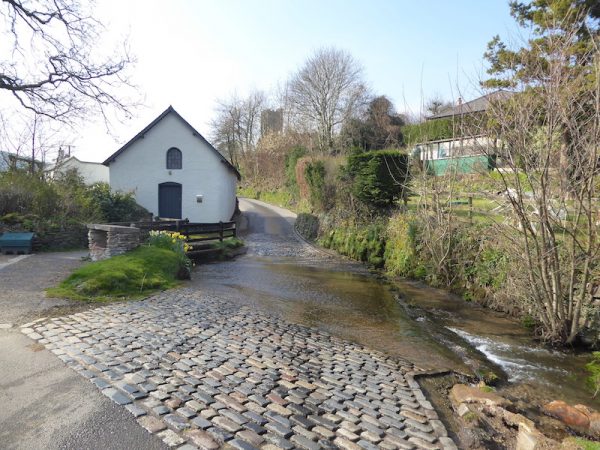 From the ford it is a gradual climb up the road, passing below the church. At a fingerpost to Winsford Hill via the Punchbowl we turn left and follow the path to a kissing gate that enters a field of pasture. 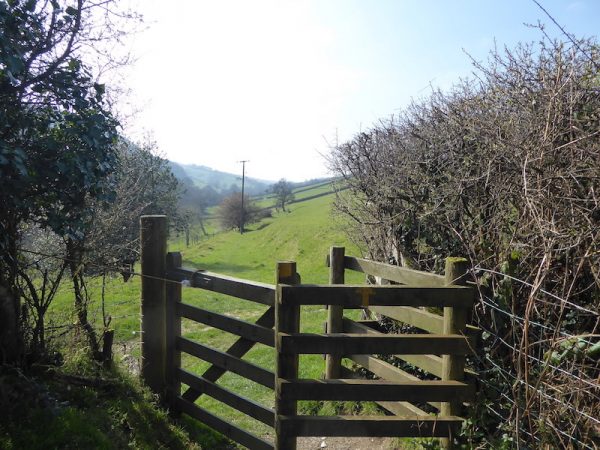 We now follow yellow way-markers across a number of fields of pasture. After yesterday’s low cloud and mist the skies are clear and it is pleasant walking in the spring sunshine. 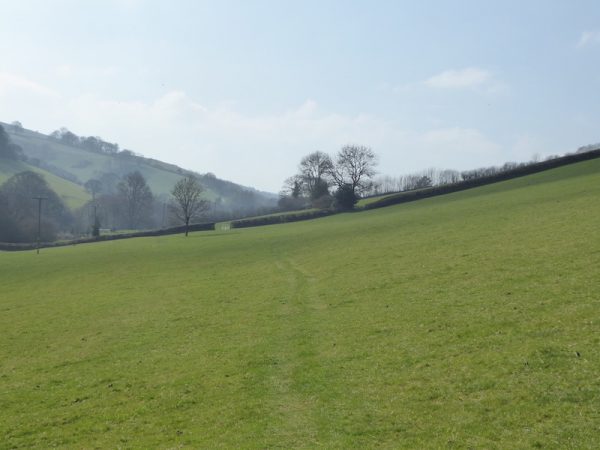 The route skirts above Withycombe Farm before dropping through the farmyard and then crosses Winn Brook.  The path now starts to head uphill with great views of the Punchbowl. 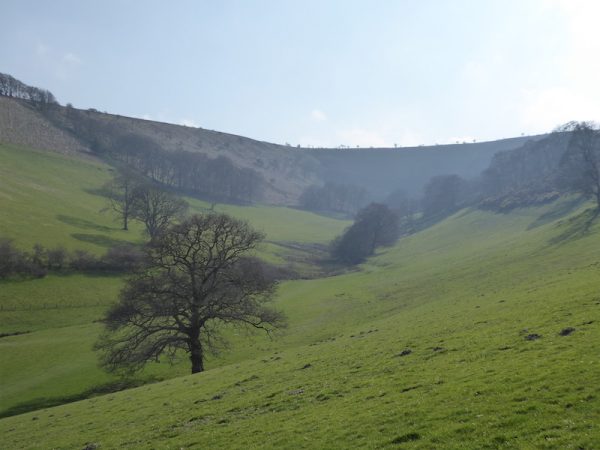 It is a long gradual haul up this hill, a good test for the lungs and legs.  I would normally try to tackle a hill like this without stopping, however, Dexter needs a break every now and again so we have a chance to admire the views and catch our breath. 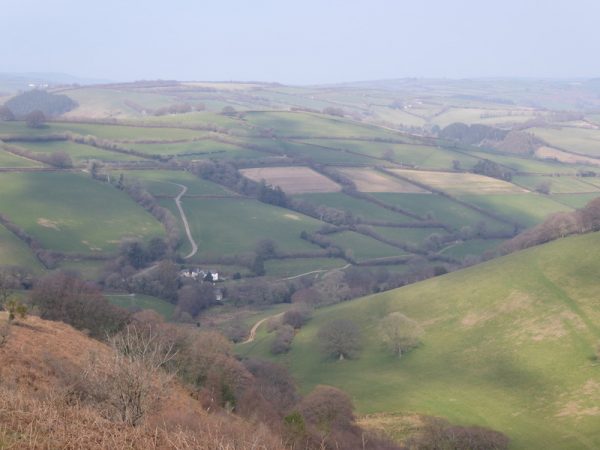 As the path levels out we continue straight on, leaving the rim of the punchbowl, to head west along a path to the trig point on top of Winsford Hill. I bagged this trig in January, but it is Lynnie’s first visit here. 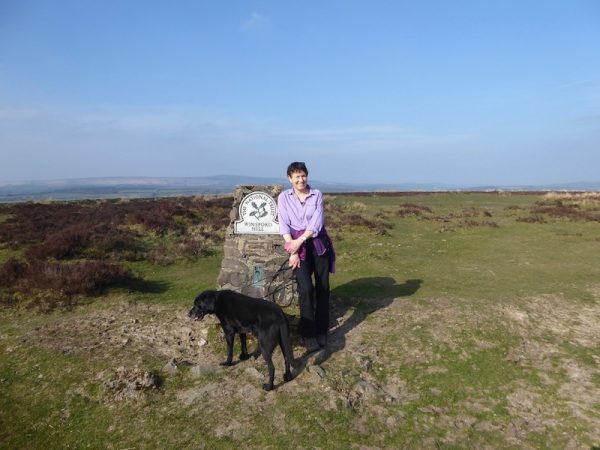 From the trig we turn and walk the short distance to the B3223 and cross to continue on a faint path opposite until we reach a clear track where we turn right heading in a westerly direction. 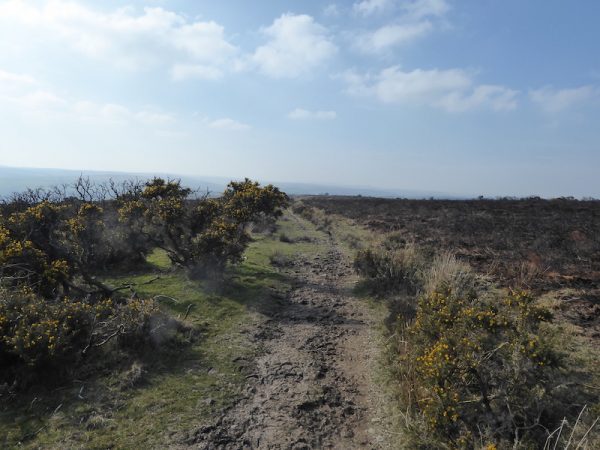 We continue along this track across access land until we reach a footpath where we turn left to follow this route across the moor. 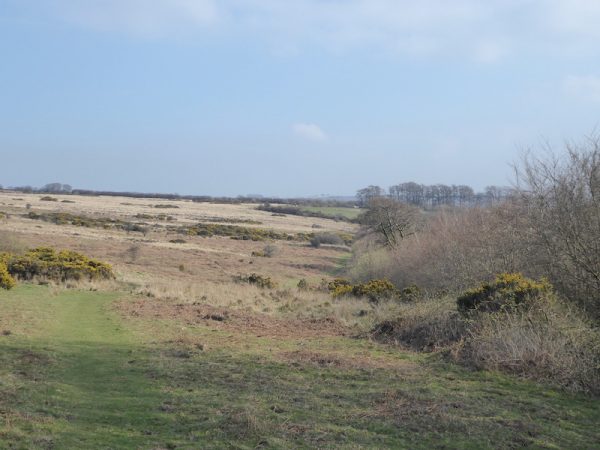 At a junction of paths by a way-marker we turn left, the path soon follows the hedge line at the edge of the moor and goes through a couple of boggy areas so we try to find drier land by walking a bit higher up the moor following paths other people, or animals have trodden. 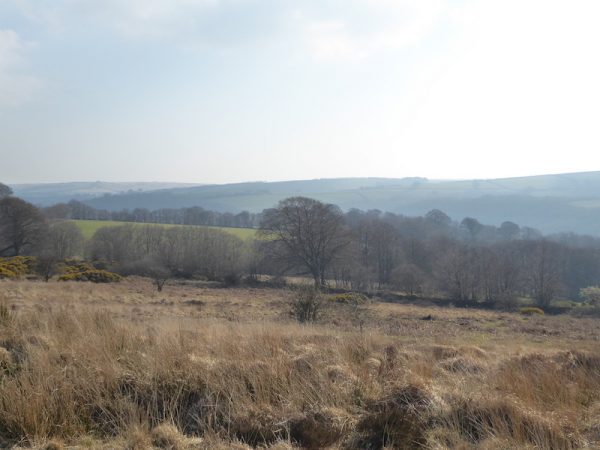 Our route now roughly follows the southern edge of the moor, however, finding firm ground to walk upon proves challenging so we spend plenty of time trying to pick suitable routes through the boggy marshland.  I am usually overcautious in these conditions, but had a reminder earlier in the year that you need to be careful on Exmoor when Crosby stood in what looked like a puddle besides a path and ended up shoulder deep in the mire. 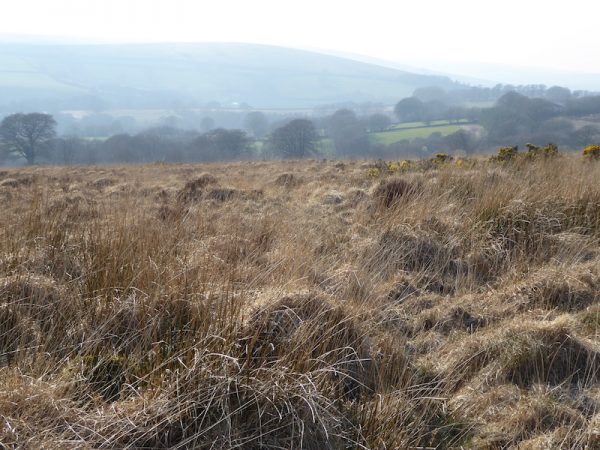 It is with some relief that we reach a farm track across the moor and turn left and follow this as it heads towards Spire Cross. 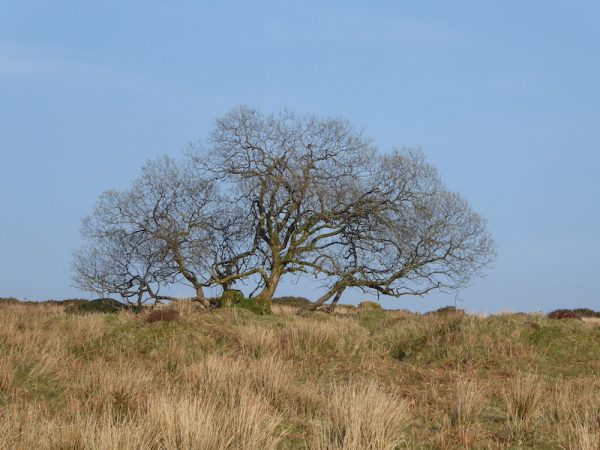 I like walking at this time of year on the moor with the gorse in flower and the air fragrant with its coconutty smell.  Of course, the gorse being in flower signifies the kissing season, however, having made Lynnie trudge through boggy land there is no chance of me getting so much as a peck on the cheek! 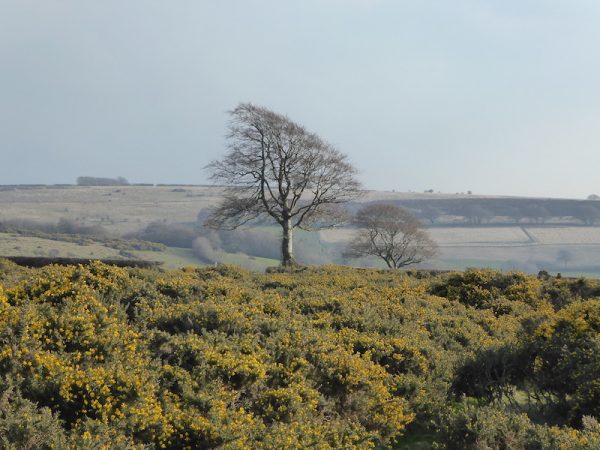 On reaching Spire Cross we cross the road and head in an easterly direction to reach the Caratacus Stone. 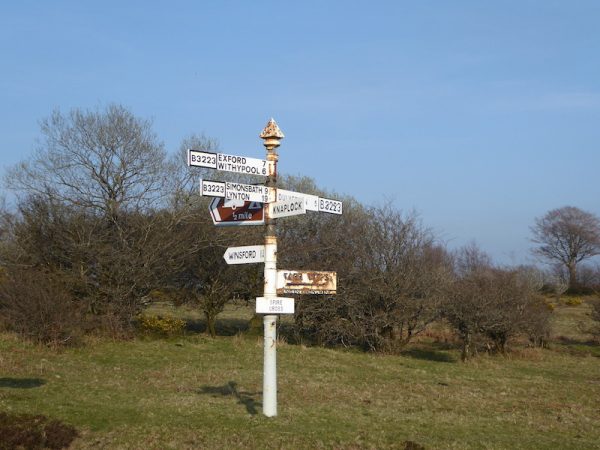 Apparently the Caratacus Stone dates from the 6thcentury, it is covered in a stone shelter built in 1906.  It is thought from the Latin inscription on the stone that it represents an ancestor of Caratacus, he was the son of Cunobelinus said to be the greatest king of Iron Age England.  Caratacus led the rebellion against the Romans in 47-51 AD before being captured in a battle thought to have taken place near Llanymynech close to Oswestry, in 51AD.   The stone was removed in 1937 to see if there was a grave beneath, but nothing was found. 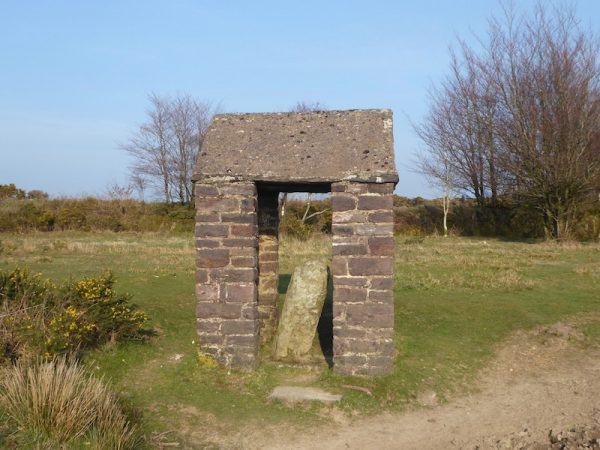 Our walk continues by heading southeast along the hedge line of a moorland area marked on the map as the Allotment. The path stays close to the hedge, but there is thick smoke blowing our way from the burning of gorse on the moor to our left, so we take a slightly higher path heading east towards a minor road.  Just before the road we turn left to join a footpath leading into a field of pasture. 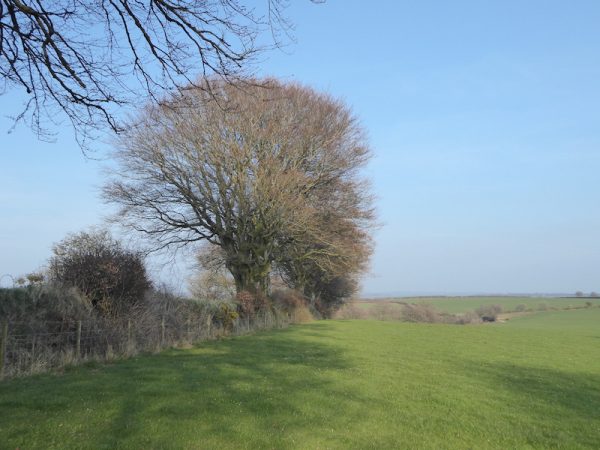 The path continues across the field to join another footpath close to an open gateway.  The footpath now turns to the left and follows a steep narrow path downhill. 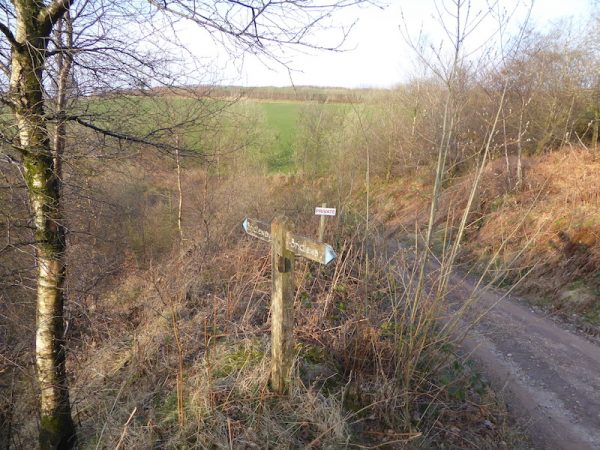 Soon the path enters trees with a brook running down to our left. 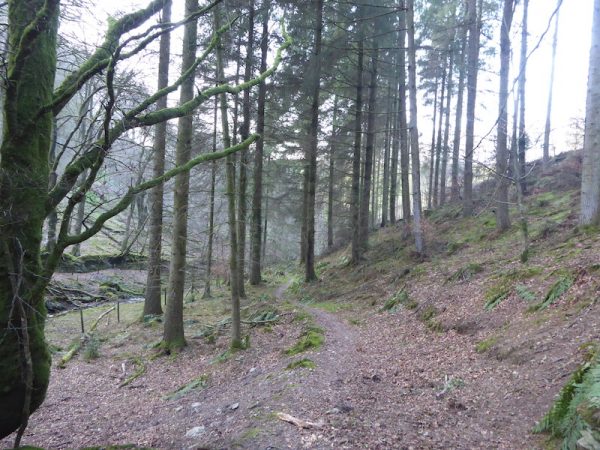 On reaching a footbridge close to the isolated Yellowcombe Cottage we cross the brook. 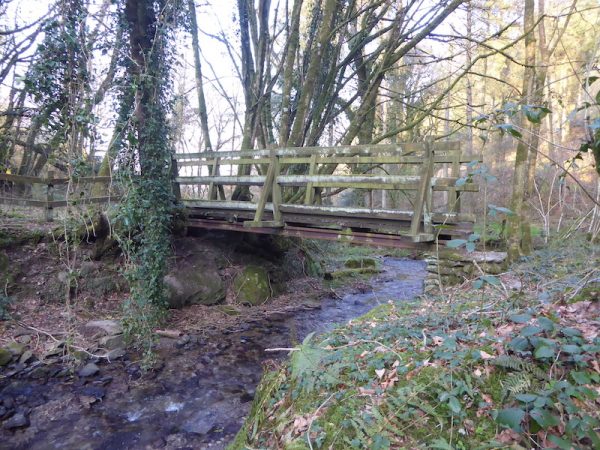 The route now heads uphill on a narrow track, Yellowcombe Lane, soon passing the ruins of buildings.  We now head steadily uphill and at the summit follow the track as it sweeps to the left to head downhill towards Winsford. 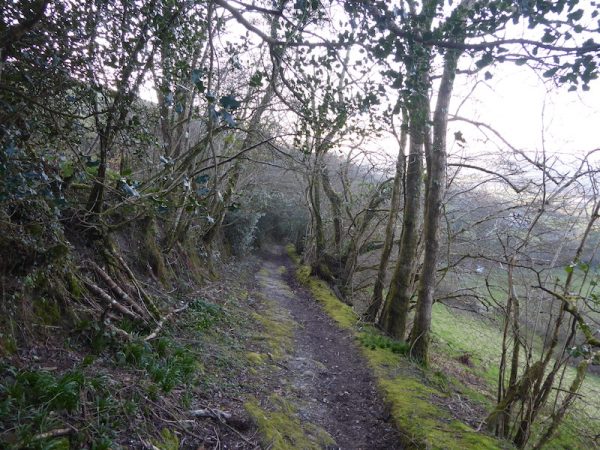 On reaching a tarmac road we turn right into the village, passing the Royal Oak Inn.  Before heading back to the car we take a slight diversion to walk through the village to the house where Ernest Bevin was born in 1881. 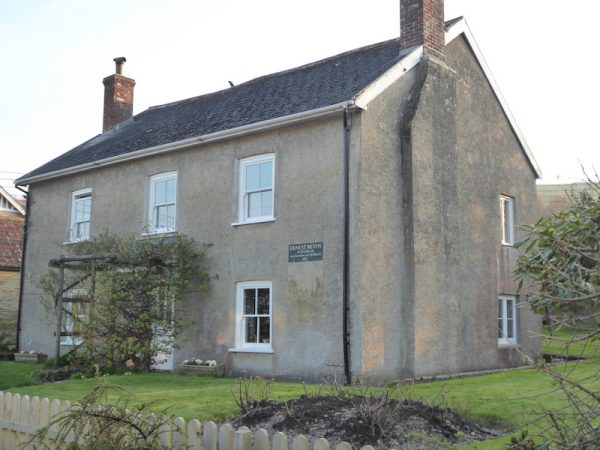 A founding member of the Transport and General Workers Union and part of the early development of the Labour Party Bevin was a key figure in British politics.  During World War II he stepped across the political divide to work with Winston Churchill’s all party coalition wartime government as Minister of Labour.  His work set a basis for British Labour laws which lasted for fifty years.  Unlike modern politicians he can be truly described as a statesman, a man whose diplomatic skills and political acumen had a major impact on Britain during and after World War II.

We head back to the car, along the way bemoaning the current state of British politics, a regular topic we discuss as we travel around.  Our walk has covered eight miles, which is about Dexter’s limit at the moment.