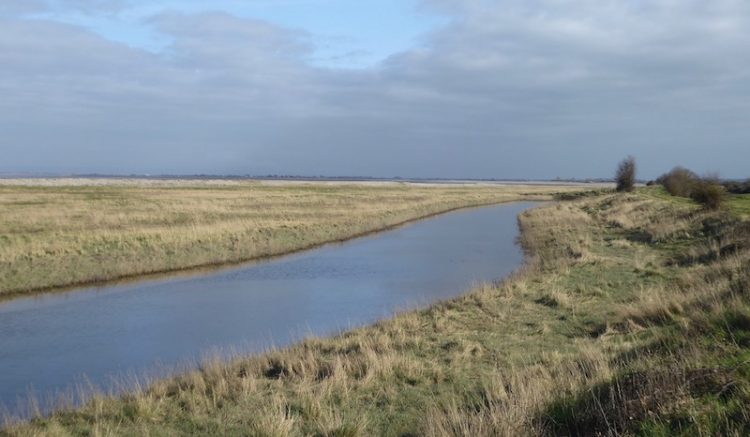 Last night as I was studying the OS Map I realised there is a part of the nearby West Somerset coastline I have never walked.  Even though I lived in Taunton for a few years and walked extensively on the Quantock and Blackdown Hills I did not venture the other side of Bridgewater to walk in the lowlands around Bridgwater Bay.

Whilst not exactly on the doorstep of my pitch just outside of Wellington it is only a relatively short drive up the motorway and then through Bridgewater to reach the start of my walk at the Wildfowl and Wetlands Trust (WWT) car park at Steart Marsh (Grid Reference ST251442).  Leaving the car park I cross the road to enter the nature reserve, at a junction in the pathway I turn left to follow the well-made path. 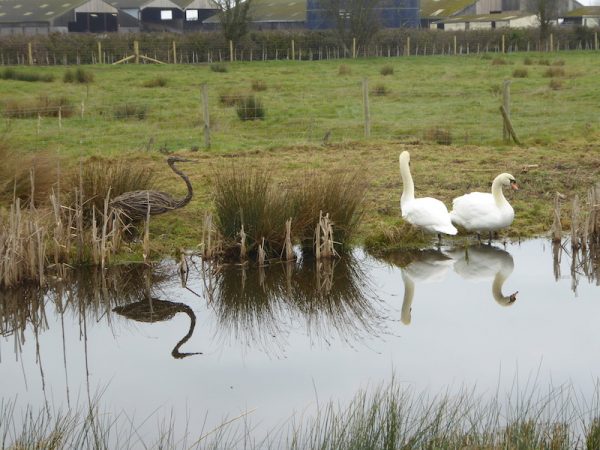 Soon I get views of the marshes to my right.  It is currently low tide so relatively little water is covering the marshland. 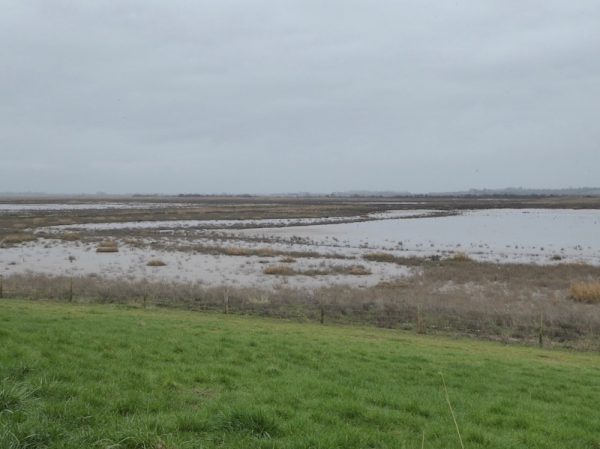 Then I reach Polden Hide, one of a number of hides built by the WWT.  The plan to create these wetlands was hatched in 2010 as part of the costal sea defences in this area.  The environment agency spent near on £20m on this site and it is the largest wetland habitat creation scheme in England. 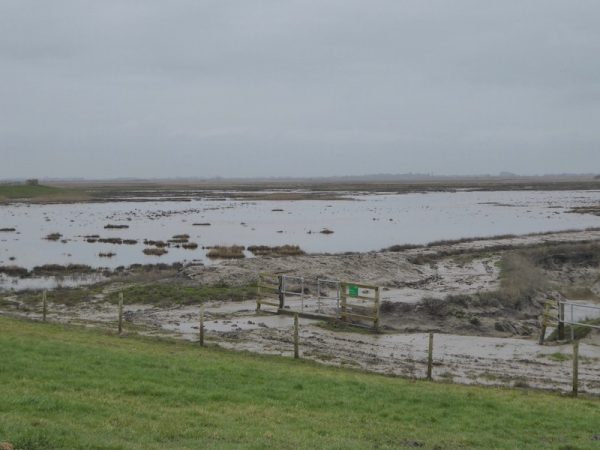 As I continue along I spy a couple appearing to be watching me through binoculars. Unperturbed I continue on my way and soon reach them.  As I pass they ask if I spotted the Short Eared Owl, which was on the ground on the other side of the fence from the path. Apparently, it was just a few yards away from me.  I turn and spot it on a post in the distance, but too far away to get a clear picture. 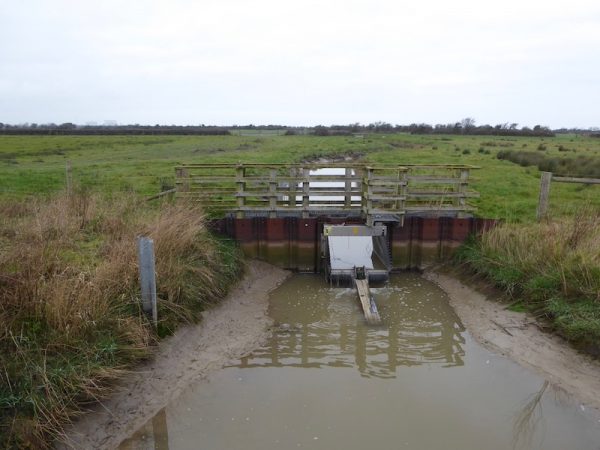 Approaching a farm track I take a right turn to follow the trail towards another hide.  From here there are good views across the wetlands. 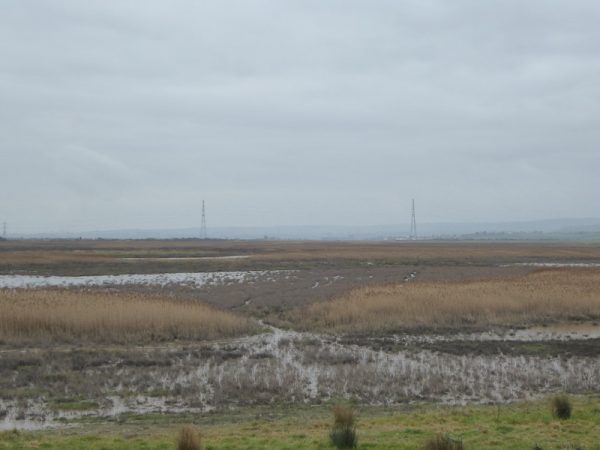 As I go to continue my route there is a sign saying that the route beyond here is closed in the winter months to protect the birds.  So I turn and retrace my steps to the gate.  Here I notice the footpath way-marker indicating the summer and winter route.  Clearly I was not concentrating when I passed it earlier. 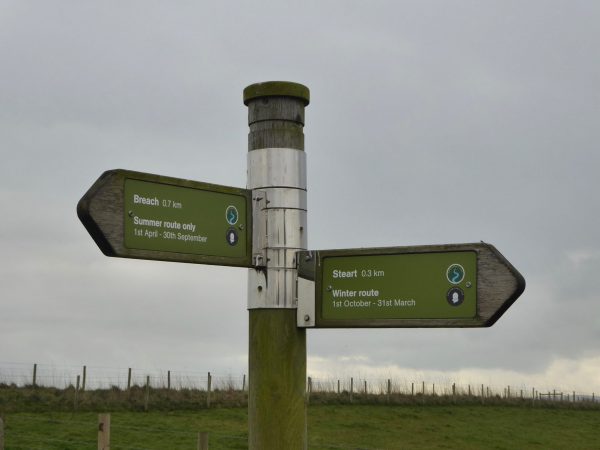 I follow the winter route way-markers along a track to reach a minor road where I turn right and walk past the entrances to several farms.   The road then becomes a track with an old pebble wall. 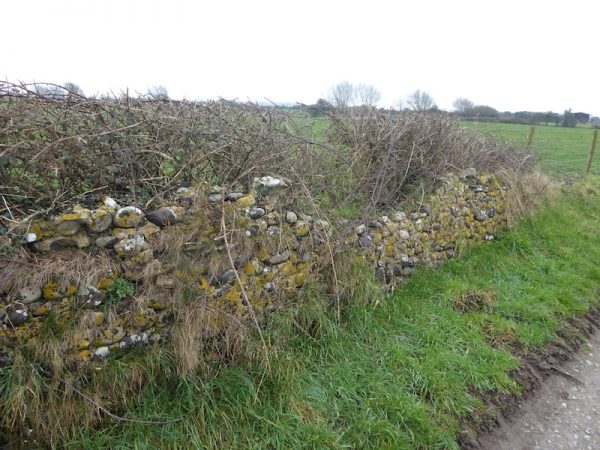 The track turns sharp to the right and then at a junction of paths I turn left and carry on to reach a field with sheep.  Here I take a right turn to walk across the field to reach the observation tower for Bridgewater Bay National Nature Reserve. 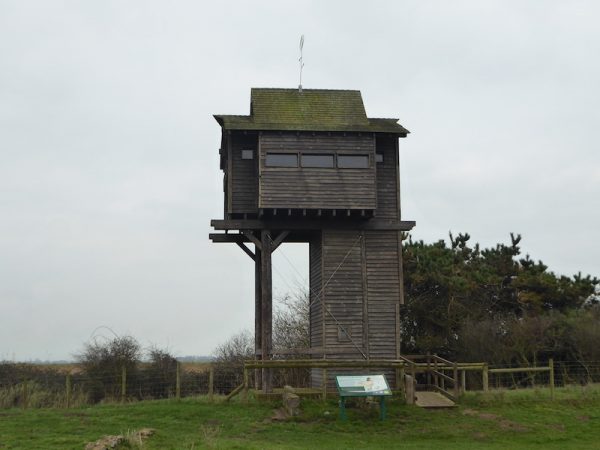 From the tower I head back across the field to go through a gate to join the coastal path. I am now on the seaward side of the farms I passed earlier. The route is easy to follow, although walking on the uneven surface of large pebbles is tough going. 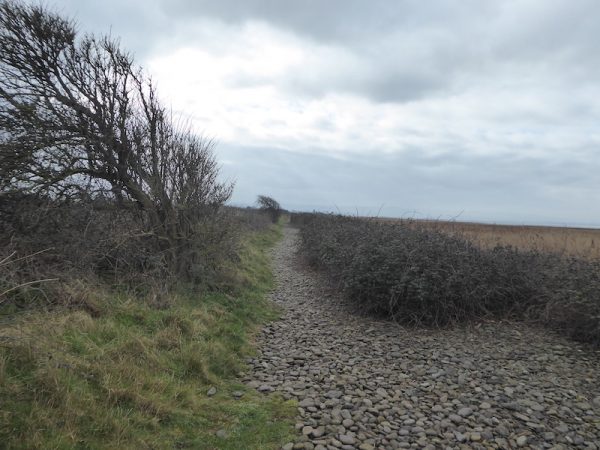 Soon I pass St Andrews Church, which was built in 1882. 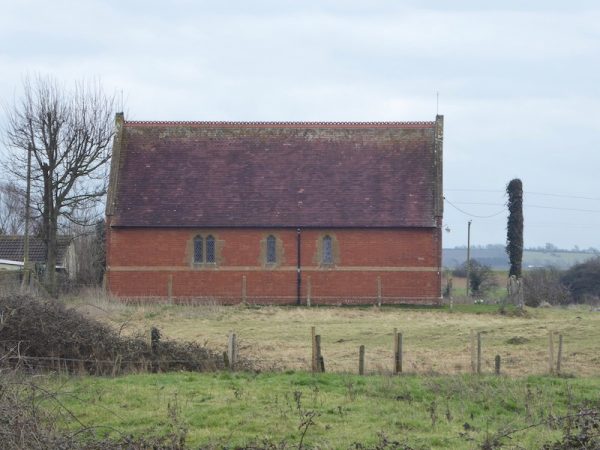 This area is very tranquil, the only sound I can hear is that of wildlife.  But it was not always so quiet in these parts. From 1927 into the 1940’s Steart Flats were used by the RAF as an air gunnery range with planes dropping bombs on targets on the mudflats.

In front of me across the reeds I can see the Hinkley Point Nuclear Power Station. 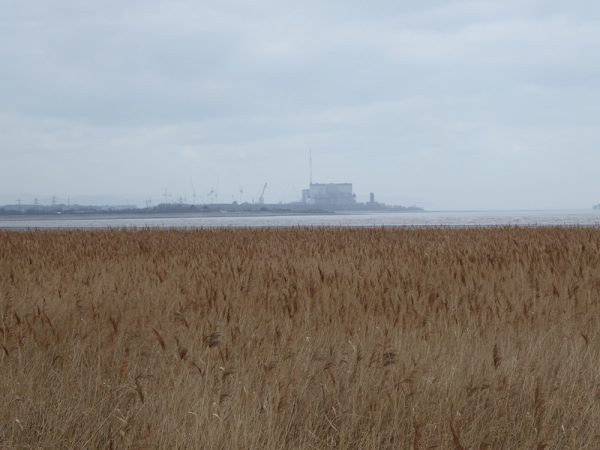 As I carry on I pass a couple of birders and then meet a chap with a very long lens on his camera.  We chat briefly and he points out a Short Eared Owl sitting on a fence post close by. 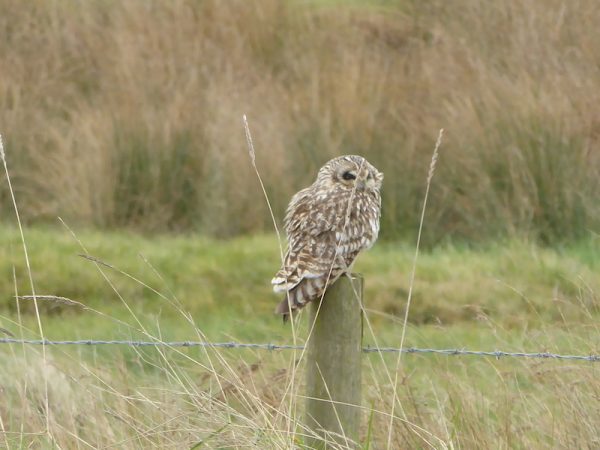 I carry on and go through a car park.  I have never got into birding, I am happy to stop briefly to watch or listen to birds as I walk, but it is not my primary purpose for going out.  Years ago I went on a walk with a birder, we covered about a mile in an hour.  The pace was far too slow for me!  However, one of my things is bagging trig points and I know there is one close by, but I cannot immediately spot it.

A search ensues and then I realise that it is built into the wall and only visible from the seaward side.  This is the 132ndtrig point that I have bagged, it is also one of the lowest that I have come across standing just 7 meters above sea level. 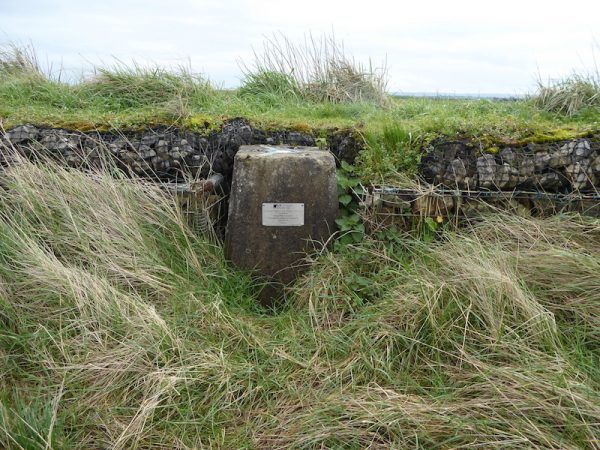 I continue along the track that appears to be doubling as a sea defence as it separates the mud flats from farmland. 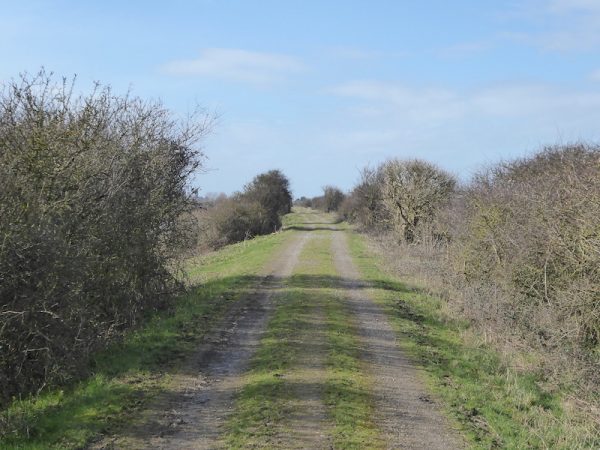 After passing Stolford Farm the route continues along the coastal path with Hinkley Point Power Station now totally dominating the view in front of me.  This is the site of three nuclear power stations.  Construction started on Hinkley Point A in 1957 and it was commissioned into service in 1965, it was taken out of service in 2000, after 35 years, and is sill being decommissioned. 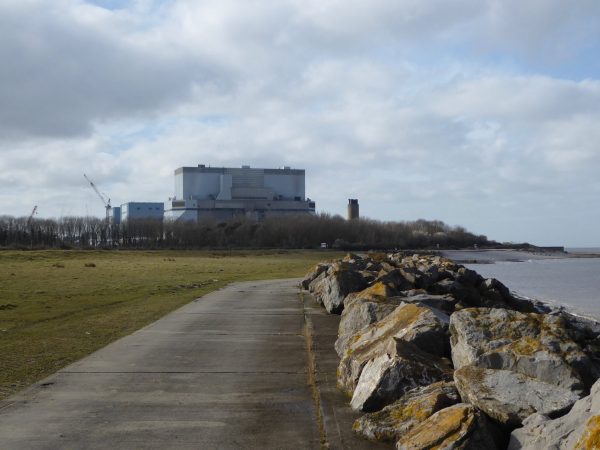 Next to it is Hinkley Point B, work on this started in 1967 and it started producing power in 1976 and still operates.  Now being constructed on the site is Hinkley Point C, this latest development has been a matter of extreme controversy, not least because of the generous government guarantees given on the price it will pay for the power produced. I am not a fan of nuclear power, in my opinion it is a means of providing today’s generations with power whilst leaving the problems and all the issues of cleaning it up to future generations.

As the path reaches the edge of the power station my route turns left to walk along the perimeter fence.  A coastal path runs in front of the power station, but it is currently closed due to the construction work.  I spot some odd lampshade looking objects; on closer inspection I discover these are for measuring radioactivity.  I am not sure if this alarms or reassures me! 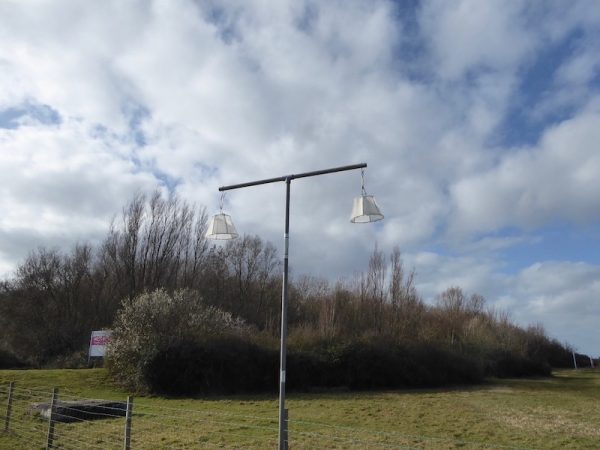 I ignore a footpath on the right and continue to follow the path that heads across Wick Moor. 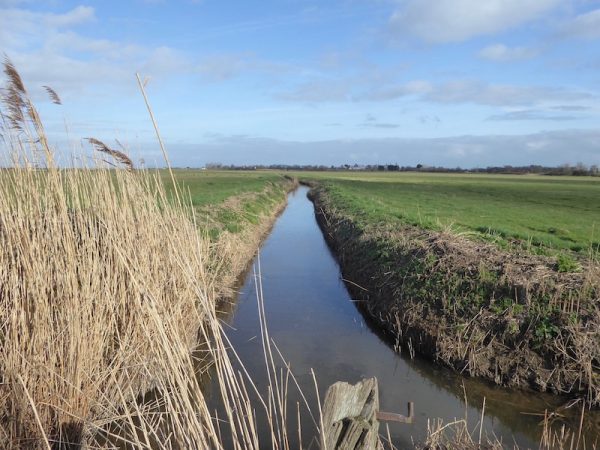 On reaching a gate I follow the track soon passing Wick Farm where I join a tarmac road and continue straight ahead to cross a stream.  This is an ideal spot for Crosby to have a drink before we continue on our way. 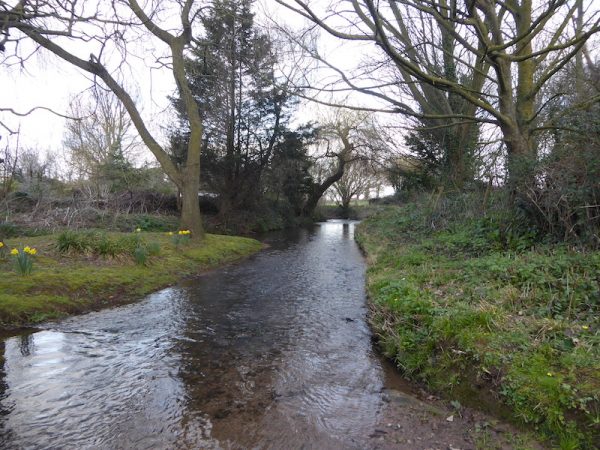 Starting again we continue up the road to a T-junction where I turn left on the narrow road sign posted towards Stolford.  As the road sweeps to the left I take a right fork to continue along a single-track road.  On reaching a T-junction I turn left and then in about 100 yards take a right turn to join a footpath along a track towards Woolstone Farm.  After passing a house I take a footpath on the right which heads downhill besides arable crops. 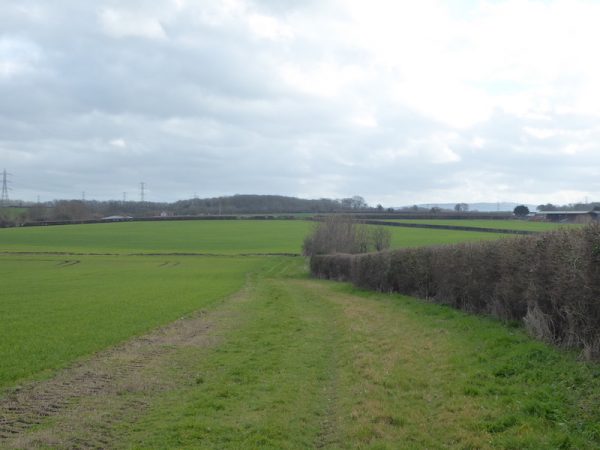 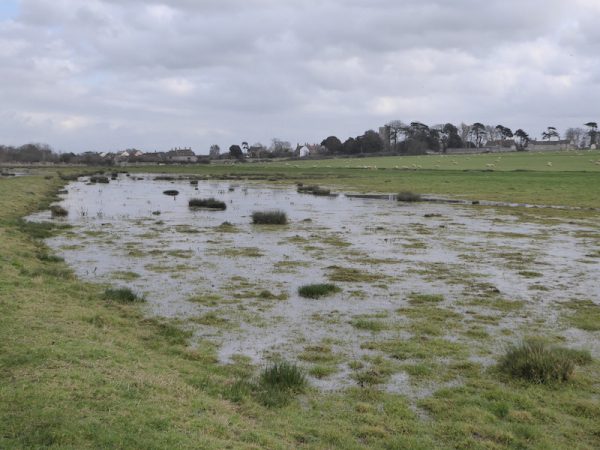 On reaching a junction with another path I turn right and then follow the footpath steadily uphill towards the village church.  On reaching a road I turn left to reach the church of St Mary Magdalene, built in 1865. 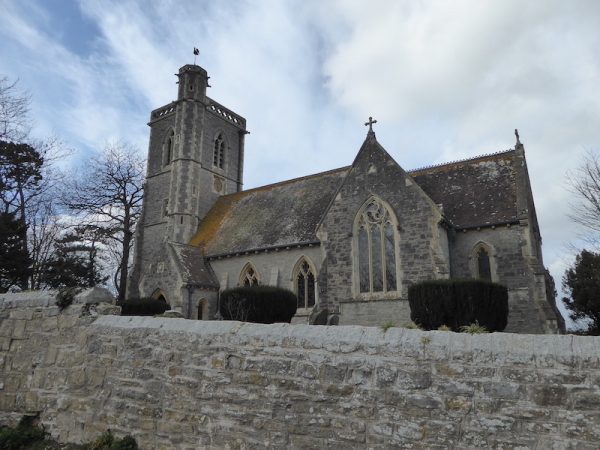 I walk through the village, apparently during World War II the Radio Security Service decided to locate two Direction Finding stations just outside the village off Steart Road, these were used to listen into enemy radio transmissions. The buildings on the site were demolished after the war.

As the road sweeps to the left I take a footpath initially leading up a drive to a property before diverting to go besides the garden and then into a field which I cross to join another minor road.  Here I turn left and then after a couple of hundred yards join a footpath on the right where I enter the Wildfowl and Wetlands Trust nature reserve. 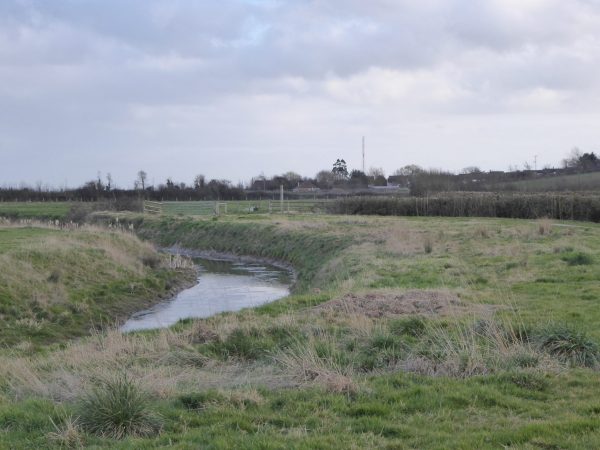 The route is now very straight forward as I follow the clear pathway through the nature reserve until I reach a junction of paths close to the village of Combwich, here I take a left and then on reaching the path besides the River Parrett turn left again. 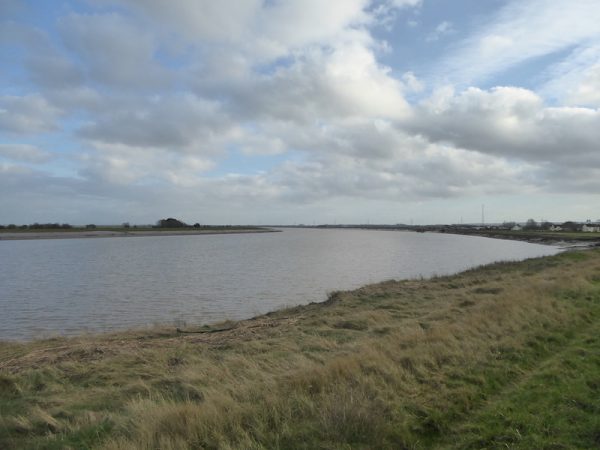 I have previously walked besides this river in Bridgewater, but I had not appreciated that it was this wide as it nears the sea. 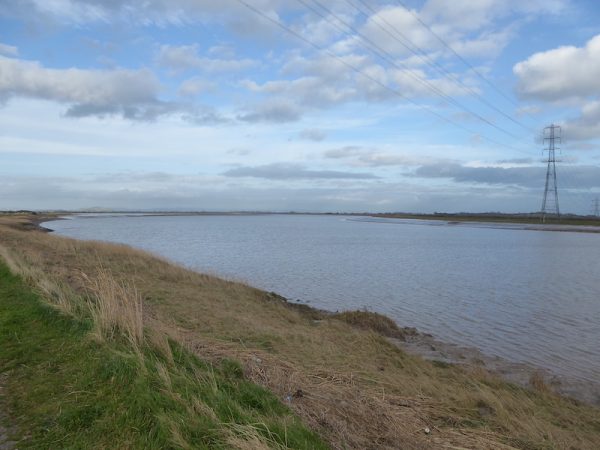 The tide is in so the water level in this tidal estuary is high.  Back as far as 1349 the Port of Bridgewater was recognised by an Act of Parliament, this extends along 80 miles of the coast. By 1424 stone quays had been built in the town of Bridgewater and the traffic up the estuary expanded.  The main export was wheat with a range of imports including coal and food supplies. Commercial traffic all but ceased in 1970’s and the dock declined, apparently it is now mainly used as a marina. 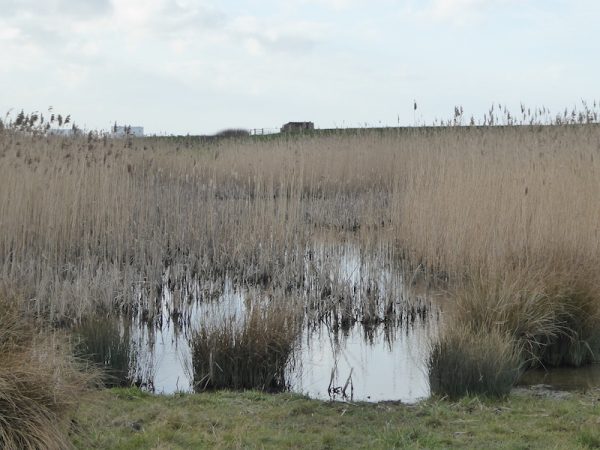 At a junction of paths I turn left, leaving the riverbank to follow the path alongside Steart Marshes back to the car park.  My walk has covered around fourteen and a half miles and being fairly flat it has been a real contrast to all the other walking I have done in the area.

To view this 14.5 mile walk on OS Maps Click Here