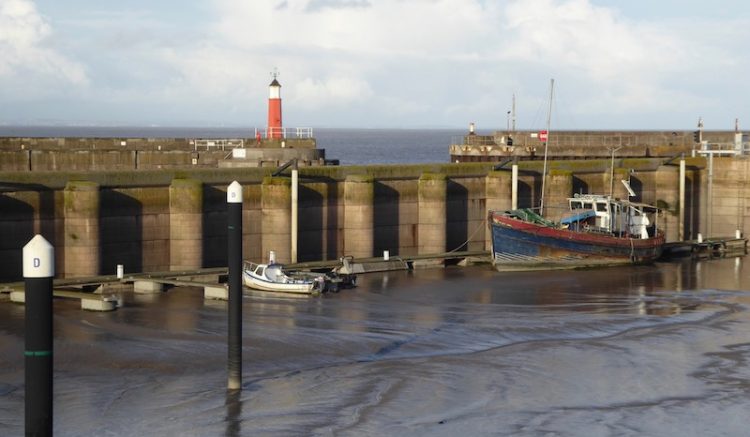 During out travels we have covered a number of miles on the coastal paths around the UK which is not bad going given my dislike of cliffs.  Today we plan to notch up some new miles for us along the coastline between Minehead and Watchet.

Starting our walk from Minehead CAMC we head down into the centre of the town and then turn right along The Avenue to reach the sea front.  Stopping briefly to look at the platform of the West Somerset Steam Railway. 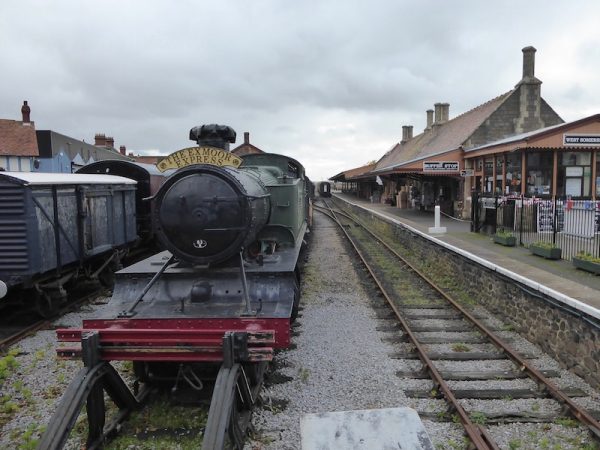 Today’s route is very straightforward.  We start by walking along the esplanade, pausing to look back towards North Hill where we walked a few days ago. 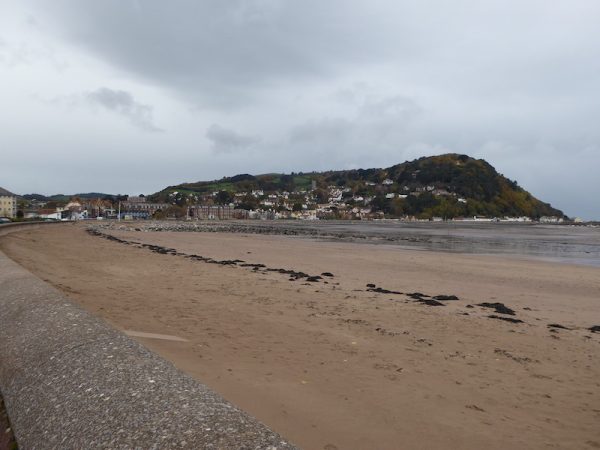 We pass the entrance to Butlins Holiday Park and carry on to the end of the esplanade then through a parking area to reach a footpath that runs along sand dunes overlooking the Minehead and West Somerset Golf Club. 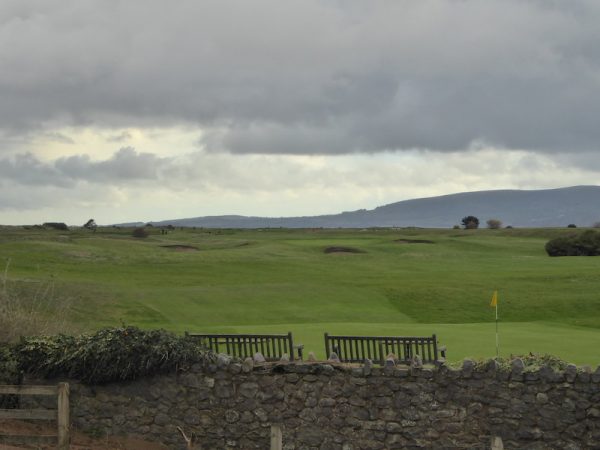 Established in 1882 Minehead and West Somerset Golf Club lays claim to being the oldest golf club in Somerset.  The course is close to the Bristol Channel and today there is a stiff breeze making it a testing course to play.  We stop to watch a four-ball group heading towards us, these chaps are certainly finding it challenging. 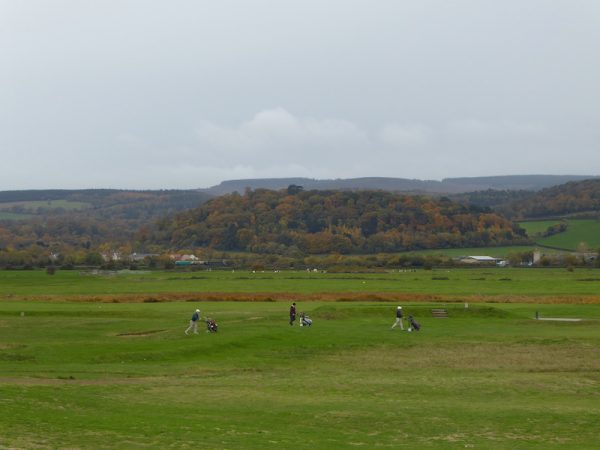 It is murky looking out across the Bristol Chanel today. 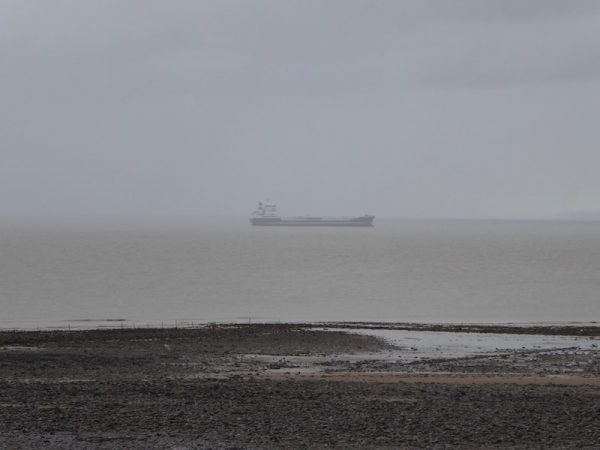 Heading by the golf course we come to a World War II pillbox, interestingly this one has been disguised with large pebbles. 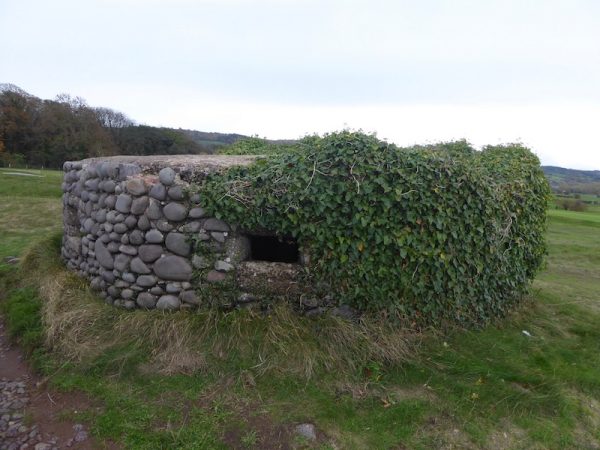 The route is very easy to follow, but there are still way-markers for the English Coastal Path.  This National Trail plans to create a path around the whole of the English coastline a total of 2,795 miles. 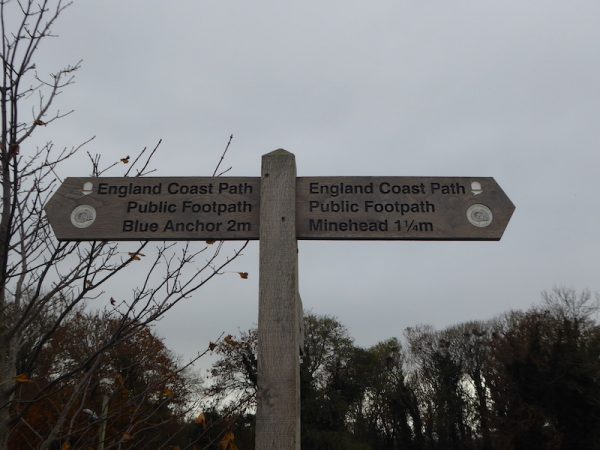 We now enter a chalet park by Dunster beach. 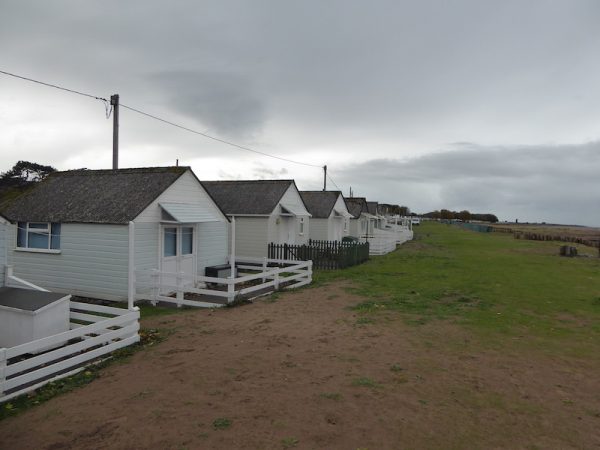 There are great views along the coastline from here. 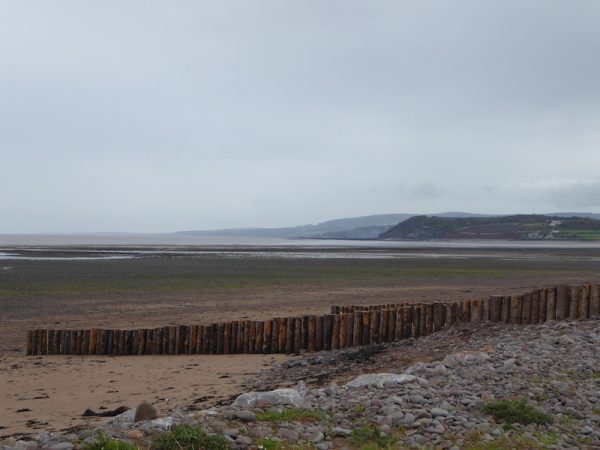 After going through a parking area the path becomes well made up and we stop to take in the ever-changing view of the Bristol Channel. 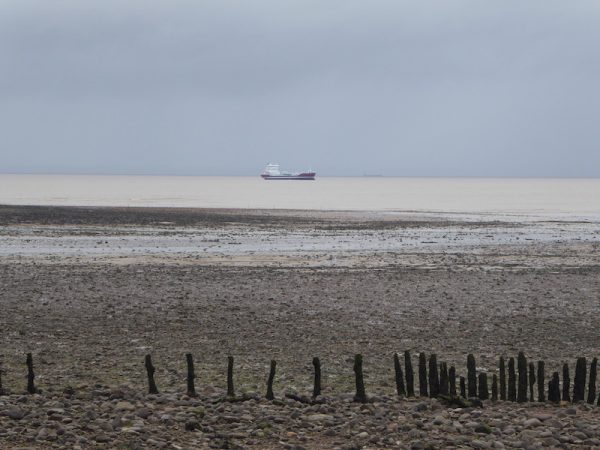 We pass some well-disguised pillboxes in the field to our right. 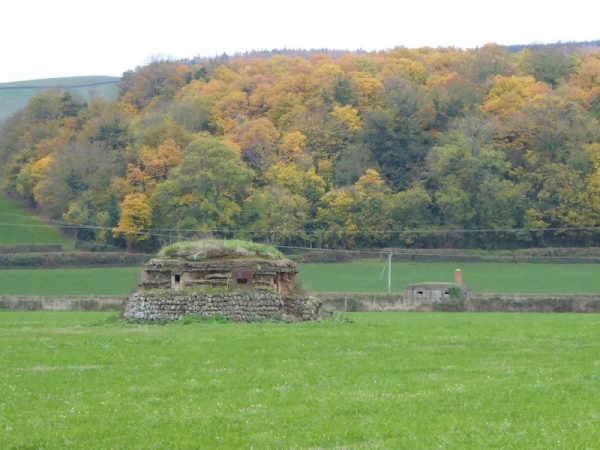 Approaching Blue Anchor the footpath rejoins the beach to skirt around yet another pillbox. 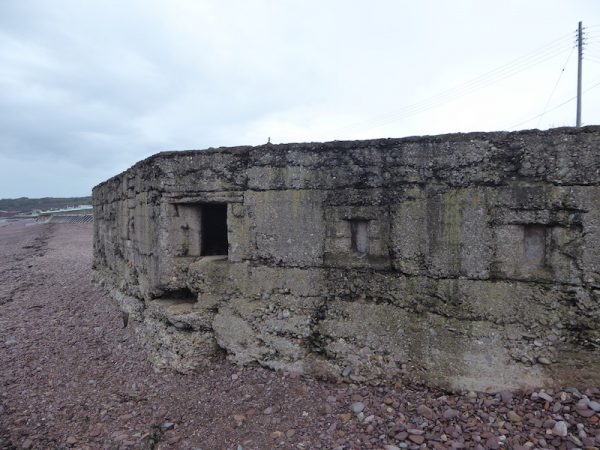 We are now on Blue Anchor seafront walking along the pavement above the high sea defence wall. 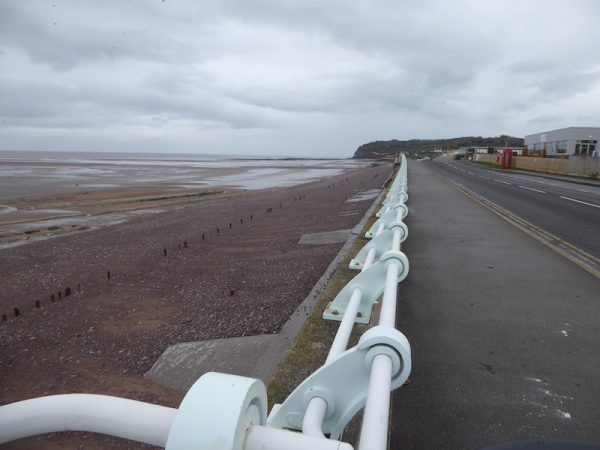 Blue Anchor is an interesting place. Apparently this seaside village was originally known as Cleeve Bay but became known by the name of the 17thcentury Inn that stands at the west of the village.  Unfortunately this inn is now closed, a notice on the building and on the entrance blames the closure on a lack of action by the Council to prevent further coastal erosion after a major recent landslip. 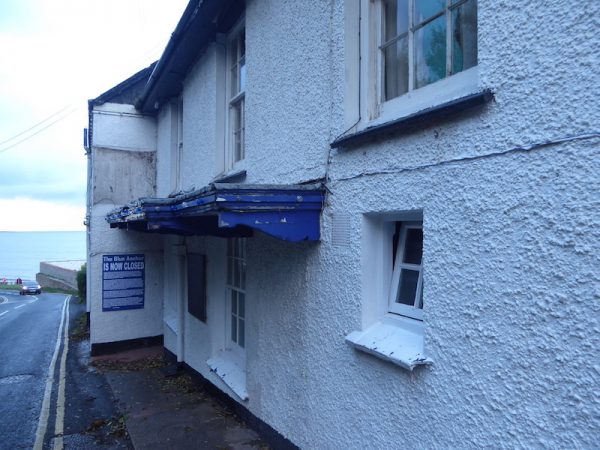 In this area of woodland there are numerous other tracks made by local walkers in addition to the footpath.  We opt for the most well worn route and follow this in the general direction of the coast.  Our instincts turn out to be correct and we end up back on the coastal path and turn right towards Watchet. 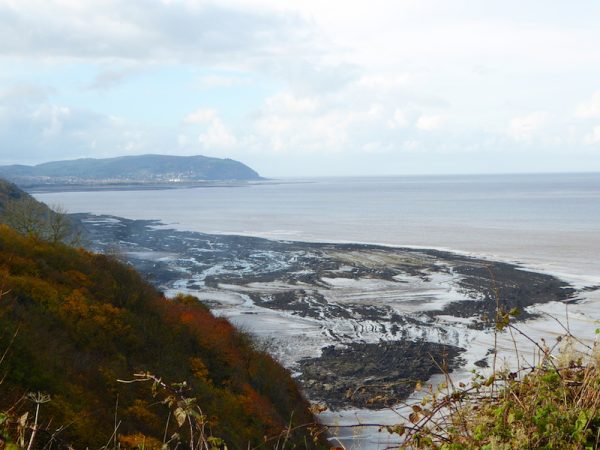 The path heads through trees before reaching open farmland on our right.  Soon I spot the trig point at Warren Farm and make a slight diversion to walk along the edge of the field to bag it.  This is my 119thOS trig point. 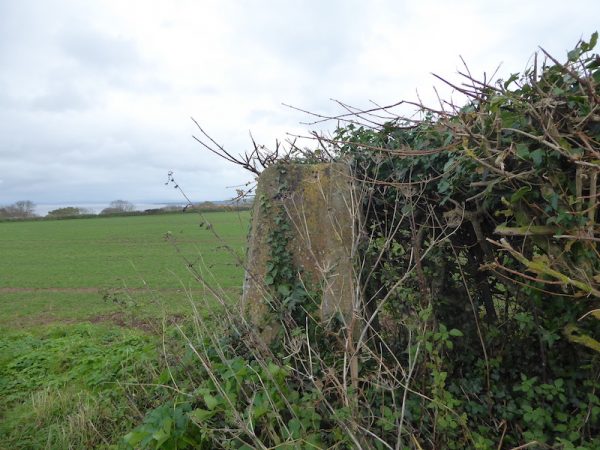 Back on the path we continue towards Watchet with good views of the Quantock Hills in front of us. 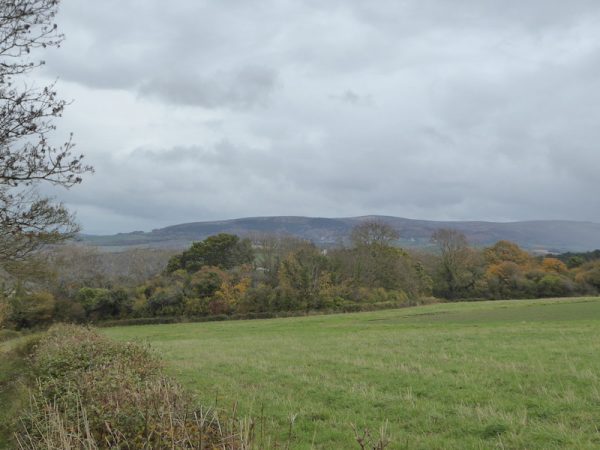 After passing a caravan park at Warren Bay we head uphill to reach open land and follow the footpath leading to Daws Castle.   This was originally an Iron Age Hillfort and then around 878AD was fortified by King Alfred as a defence from Viking invaders. The English Heritage information board also states there was once a mint here. 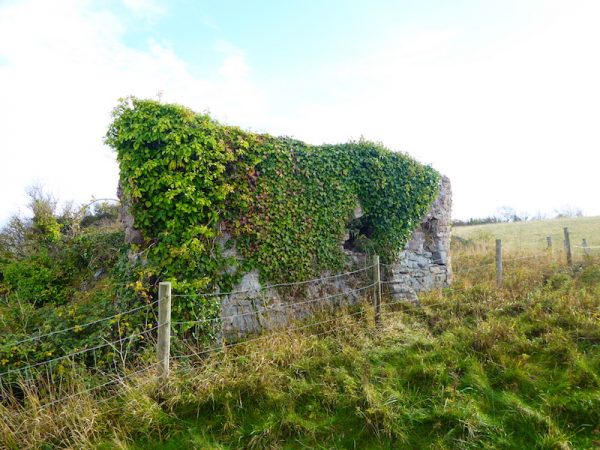 After passing the castle we join the road and wander down into Watchet heading to the harbour.  When we first visited Watchet in the early 1990’s it was still a commercial harbour, but now it operates as a marina. 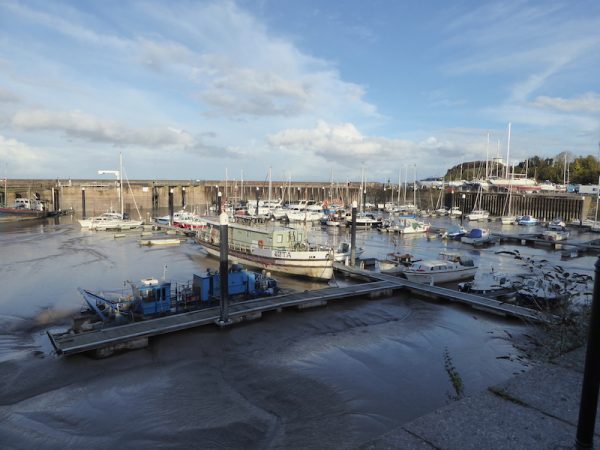 A little bit further along is the statue to John Short (‘Yankee Jack’).  He was a Watchet seaman born in 1839 and apparently got his nickname because in the 1860’s some of his ships ran the blockade in the American Civil War.  He was renowned for his sea shanties, to such an extent that the English folk singer collector Cecil Sharp gathered his songs and they are still sung today.  His image was also sculpted by Alan B Herriot. 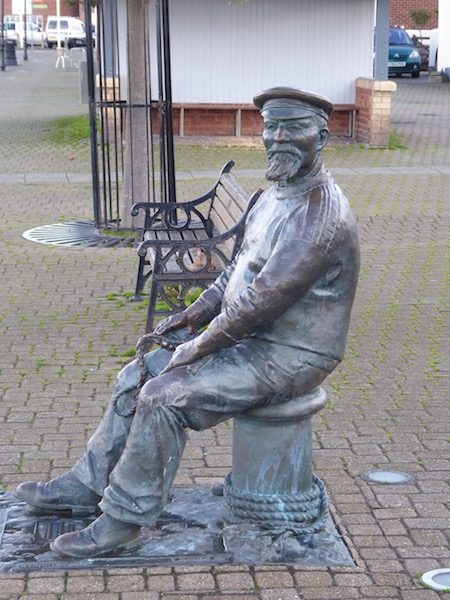 It is starting to rain so we stop in one of the shelters on the harbour side and eat our lunch, I glance at Yankee Jack and am sure he is eyeing up my cheese roll!  As we turn to head back I realise we will be pushed to reach Minehead before dark. So we set off at a brisk pace back up the hill and past Daws Castle briefly stopping to admire the view. 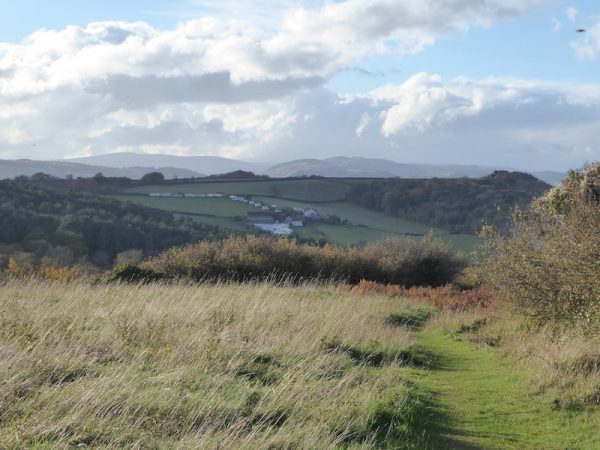 We straightforwardly retrace our steps.  As we head down towards Blue Anchor we can see Minehead in the distance. 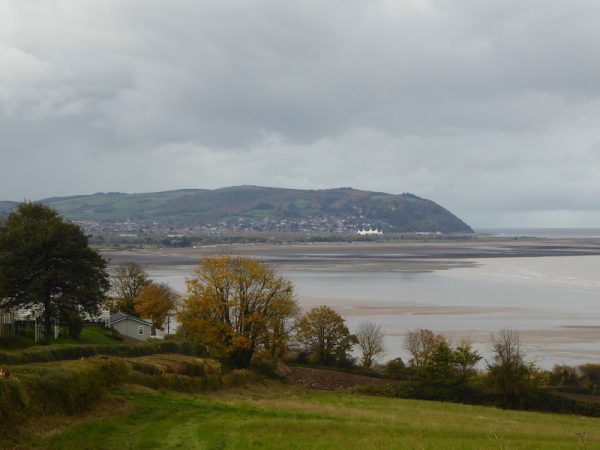 The promenade at Blue Anchor is now busy with sea anglers, well wrapped up in their fluorescent gear looking set for the night. 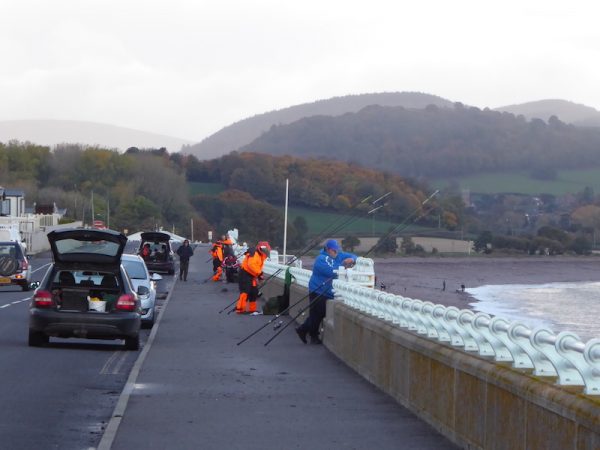 The tide is on its way in changing the outlook as we head towards Dunster Beach; the views back towards Watchet are stunning. 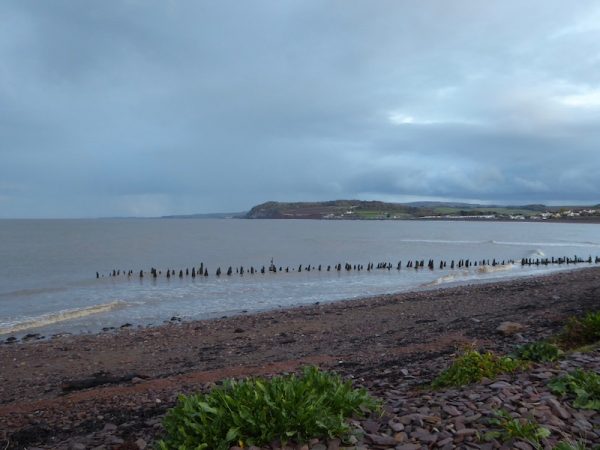 The light is fading fast and it is dusk as we reach the eastern end of Minehead golf course, fortunately the path is easy to follow but by the time we reach the club house its is dark so it is very timely that we have reached town.  Back at the caravan we have covered almost seventeen miles so all deserve a well-earned rest.

To view this 17 mile walk on OS Maps Click Here