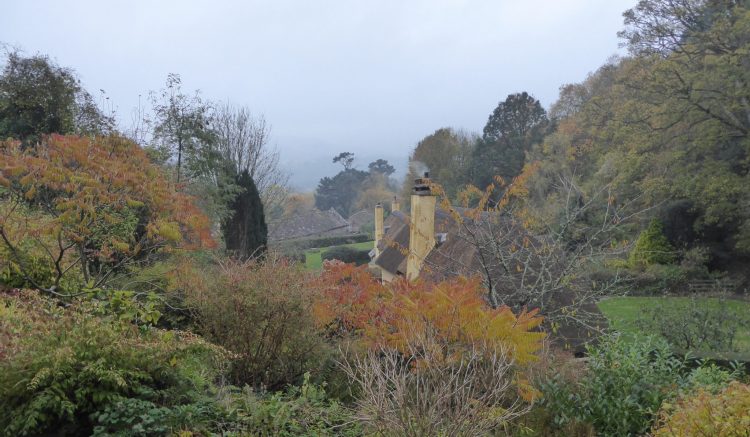 Last November I had a trip away in the caravan with Crosby.  We stayed at Cadeside the Caravan and Motorhome Club site in Wellington and spent most of our trip walking on Exmoor.  This year I suggest to Lynnie that she joins me and we stay at the CAMC site in Minehead.

With Minehead being located on the edge of Exmoor we decide to start today’s walk from the site.  We walk into Minehead by leaving the site and turning right down Hopcott Road and at the roundabout taking a left turn into Townsend Road and then forking right along Ponsford Road.  Reaching the Parade we turn right and continue to the Esplanade where we turn left.

When I was here last year work had started on restoring some of the seafront shelters. It is still on-going and those that have been completed look stunning. 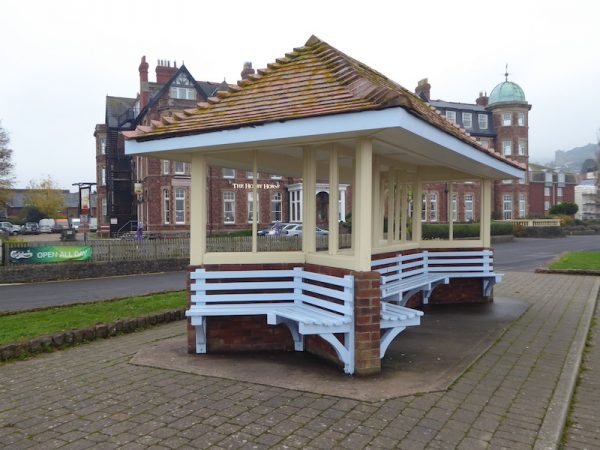 The tide is out as we head towards the harbour. 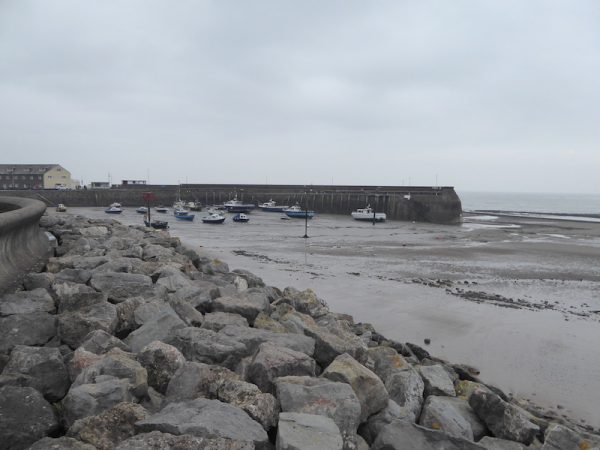 We soon reach Owen Cunningham’s outstanding sculpture marking the start, or finish, of the 630 miles South West Coastal Path.  I would love to be able to do this walk, however, my fear of heights prevents me doing the sections along cliffs. 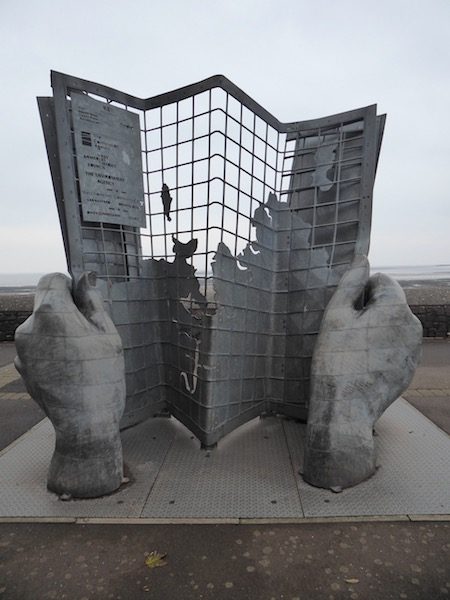 Carrying on past the Old Ship Aground pub we head along the coast path.  Then as the road ends, at a turning point, we take a path on the left traversing the side of the hill as it heads towards Culver Cliff. 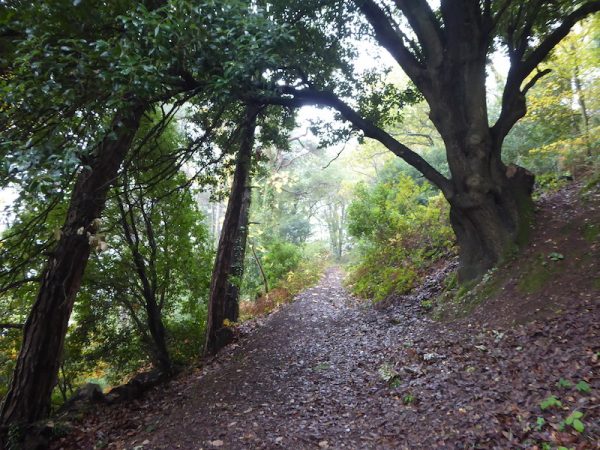 After a while we double back on a path that continues to climb steadily across the hill and then we turn right to follow a track heading northwest through the trees close to fields. 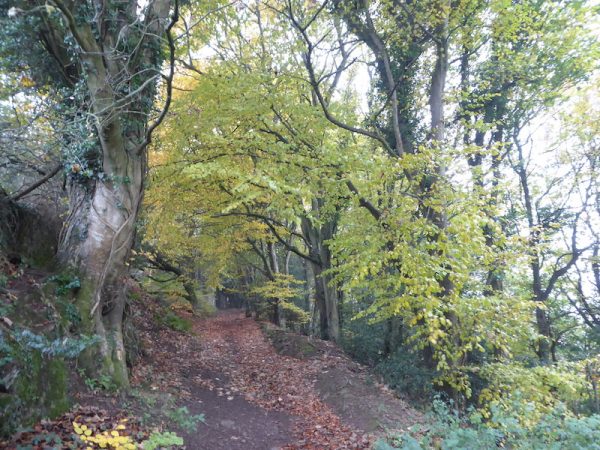 Heading up North Hill we arrive at a clearing, I tell Lynnie about the views over the Bristol Channel, today we cannot even see the sea! 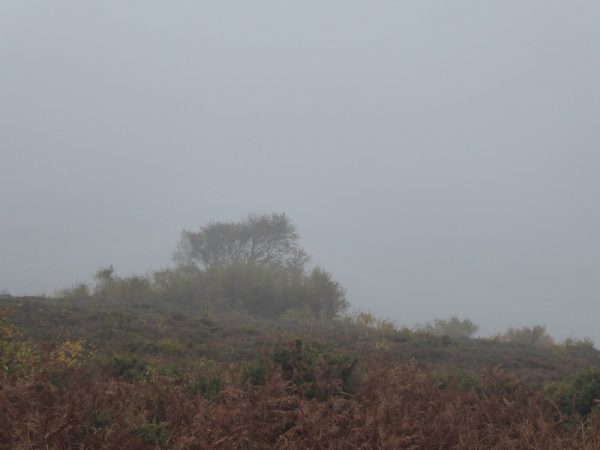 During World War II North Hill was requisitioned and local farms evacuated so the area could become the Minehead Armoured Fighting Range.  It is not long before we start to see signs of the construction that took place to enable the tank movements and the strategically placed Radar Station.  This station was built in 1942 and formed part of a network of 244 similar stations across the Country constructed between 1937 and 1944. 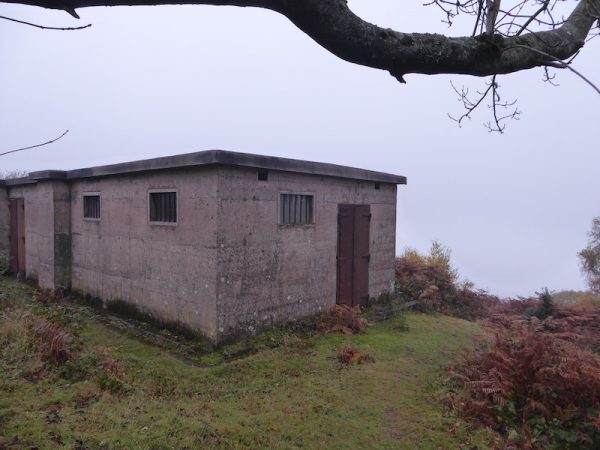 The purpose of these stations was to plot the German Luftwaffe aircraft and guide British pilots.  During World War II Lynnie’s mother was stationed in a unit like this in South Devon. Looking out from the radar station we can just see the sea below us but nothing more.

The path emerges from the trees onto open moorland and we keep going.  The visibility is becoming very poor, but the path is clear and we are unlikely to get lost.  We pass the turning to Burgundy Chapel, I visited last year and it is a very steep descent and a steep climb back up again.  We decide it is not a detour to take today so continue west along the path. 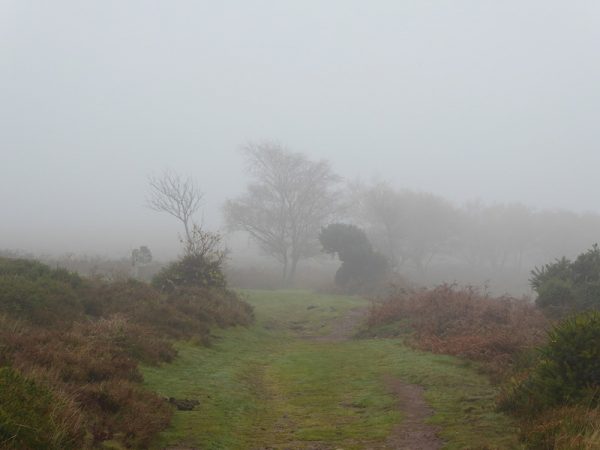 The South West Coastal path has now joined our route and we continue along it and where there is a choice of coastal path routes we opt for the inland route rather than the rugged one.   As we approach a gate some Belted Galloway cattle emerge from the mist. 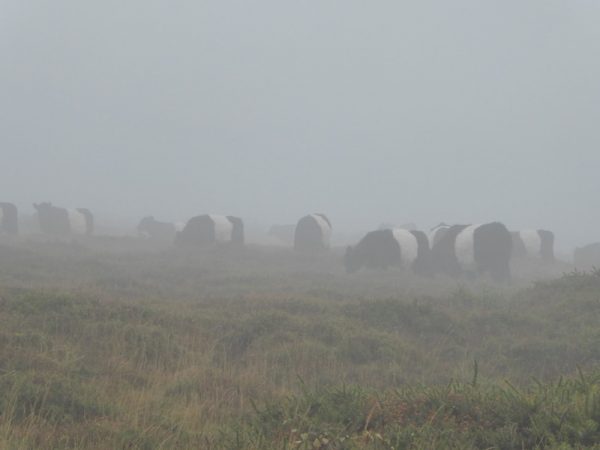 Through the gate and across pasture and we are on a gorse lined grass track. 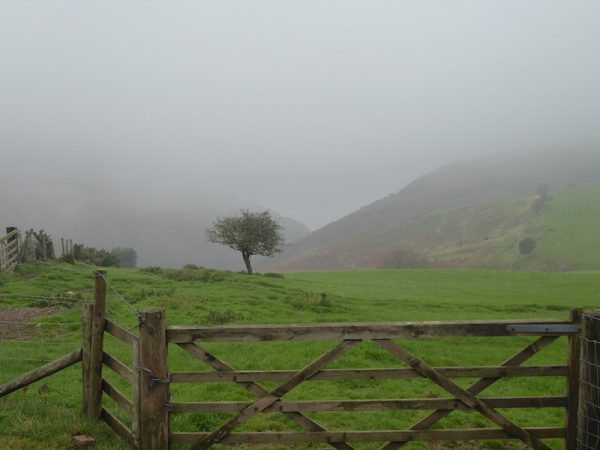 We keep going until we reach a signpost at a junction of paths. 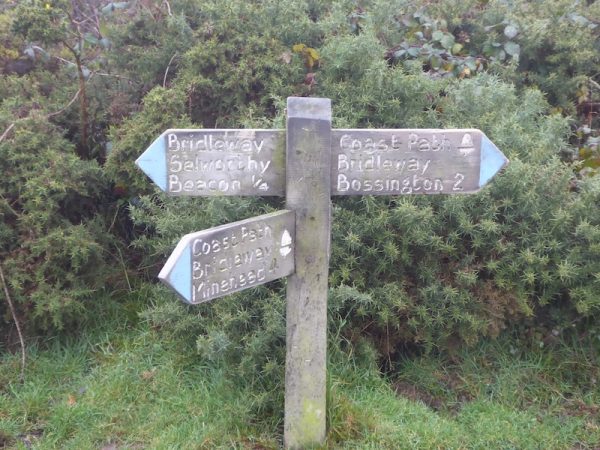 We stop here to sit on a conveniently left, old farm roller to eat our lunch.  We have to imagine the view because the visibility is now so poor.  Refreshed we resume our walk along the path signposted to Selworthy Beacon.  I have previously bagged this trig point but for Lynnie’s it is her sixty-ninth trig. 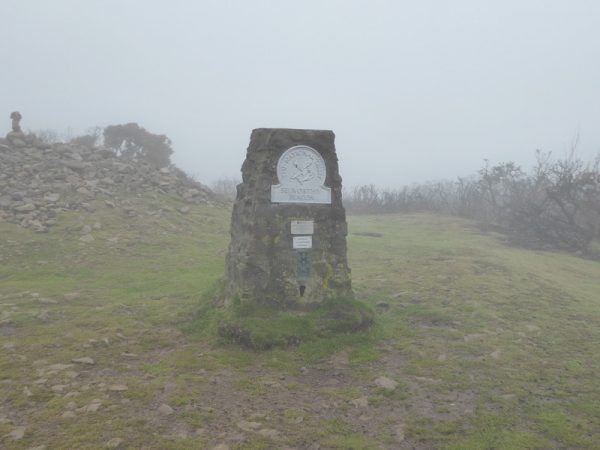 The views are non existent so we don’t hang around too long and continue on the path heading east and after crossing the minor road take a path down into Selworthy Combe, thankfully the visibility improves slightly. 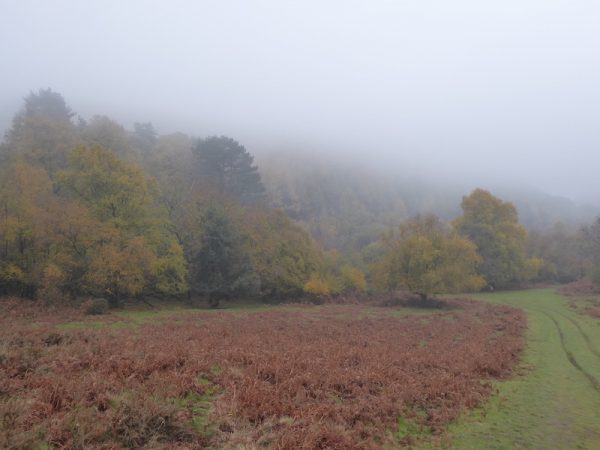 The path gradually descends through this stunning woodland. 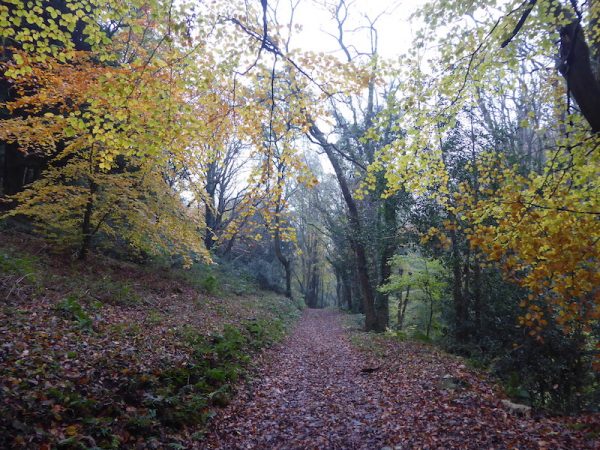 On reaching a road we turn right by the War memorial. 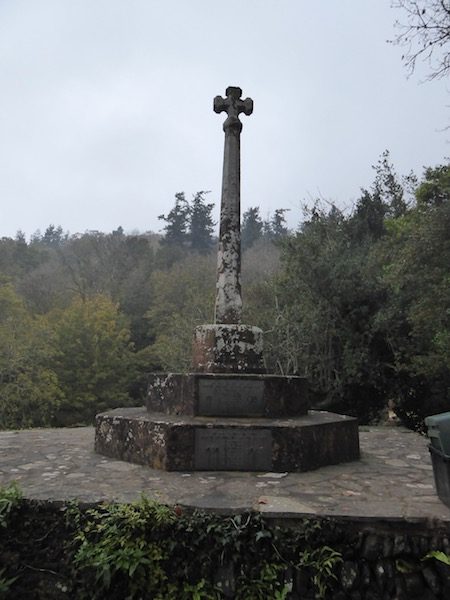 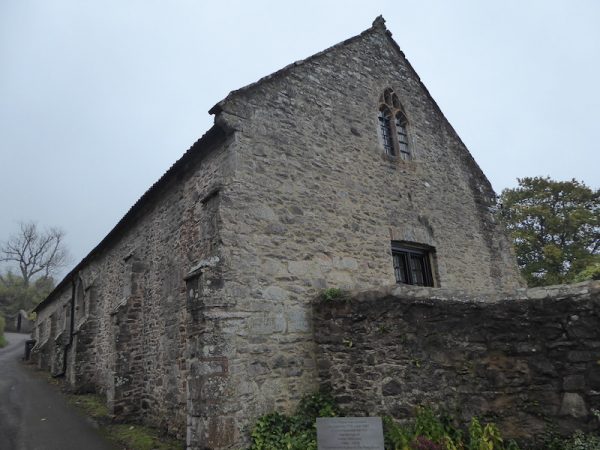 Besides the barn there is a plaque commemorating Walter Wilkinson’s visit to the village.  A few years ago Lynnie gave me a copy of Walter’s first book the “Peep Show” written in 1927 it recounts his travels through the West Country with his puppet show. I now have the full collection of his books and they are a wonderful read and much treasured. 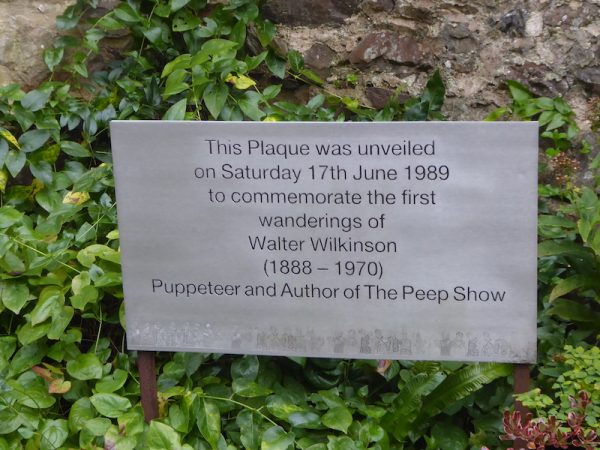 We now turn around and head back uphill to visit the impressive 15thcentury white washed All Saint’s Church. 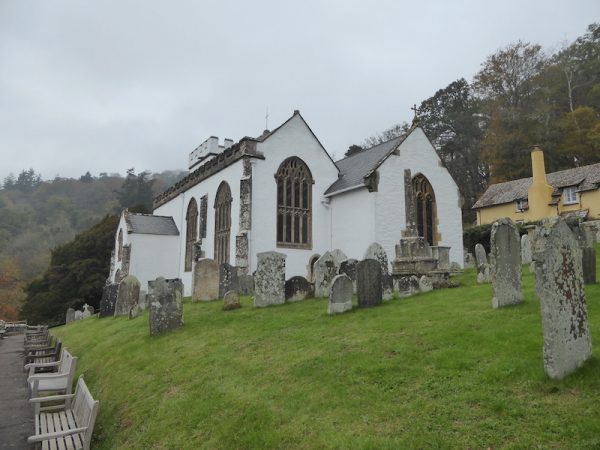 Even in the mist the view from the church car park across to Dunkery Beacon is stunning. 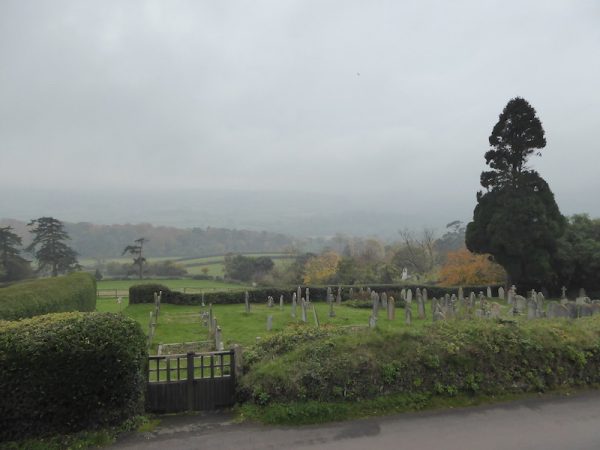 We now follow the road east carrying straight on at Dean’s Cross and then as the road turns to the right we continue straight on along a footpath besides Little Headon Plantation.  We emerge from the woodland to cross pasture; in front of us is the distinctive view of Butlin’s holiday camp in Minehead. The path turns left across another field and then reaches a minor road where we turn right and soon pass Bratton Court constructed in the 14thcentury. 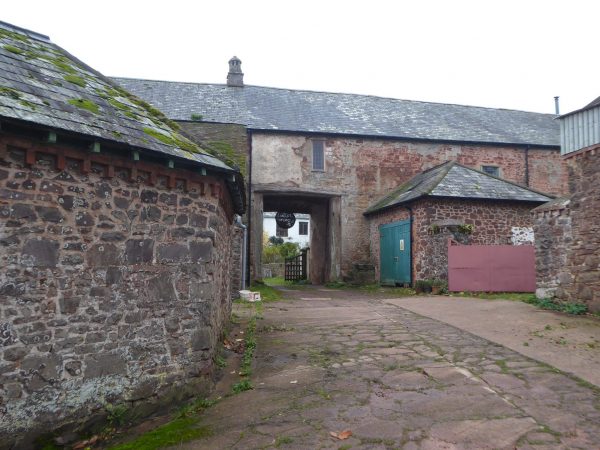 We continue east to enter Woodcombe on the outskirts of Minehead.  Here we leave the road to enter parkland by the Bratton stream. This route, known locally as the Parks walk, was first laid out in the 1920’s and linked Woodcombe to Minehead. 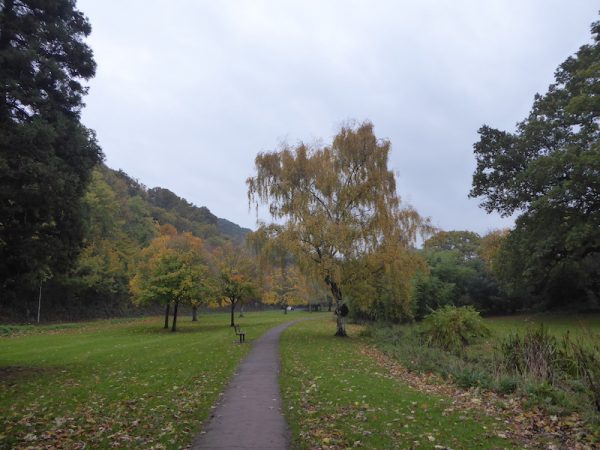 Arriving in the centre of Minehead we stop to look at the statue of Queen Anne, commissioned by the local MP Sir Jacob Banks in 1719 she was originally sited in nearby St Michael’s Church but removed during restoration work in 1880.  It was planned to relocate her in the Town Hall, but following public subscription, what we would now call crowd funding, a canopy was constructed and the statue was erected on its current site in 1893. 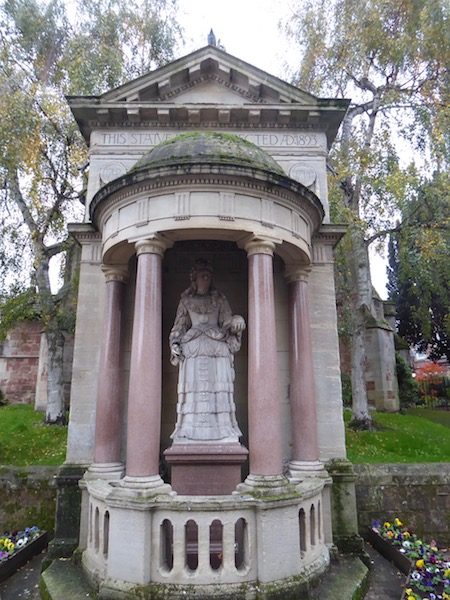 We wander through the town and then turn right off the Parade at the point where we had joined it at the start of our walk and head back to the caravan site. Our cracking jamabout has covered twelve miles and despite the lack of views has been a corking walk.