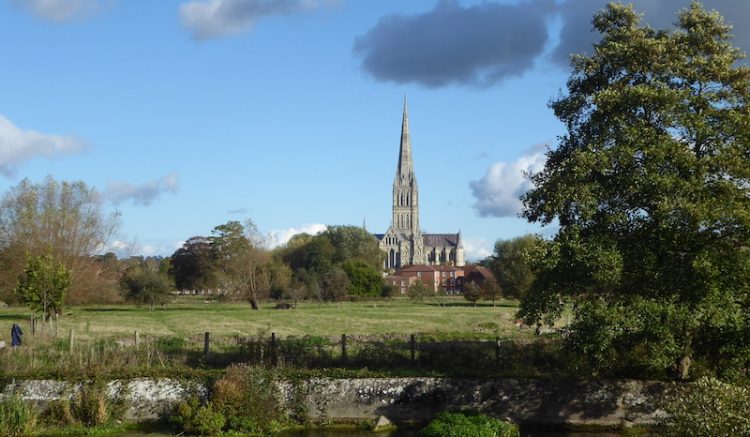 Most of my blogs are of walks taken whilst away in the caravan, but today’s is a more local walk. We have been home for a few weeks now whilst having more work done to our house.  As much as I enjoy walking directly from our village I do like to explore a bit further afield occasionally.

Today Lynnie wants to spend some time in Salisbury and I have no desire to shadow her whilst she shops so I will head out for a walk.  My starting point is the Central Car Park in the middle of the city and from here I head to the path besides the River Avon and then walk through the streets to reach the Cathedral Close. 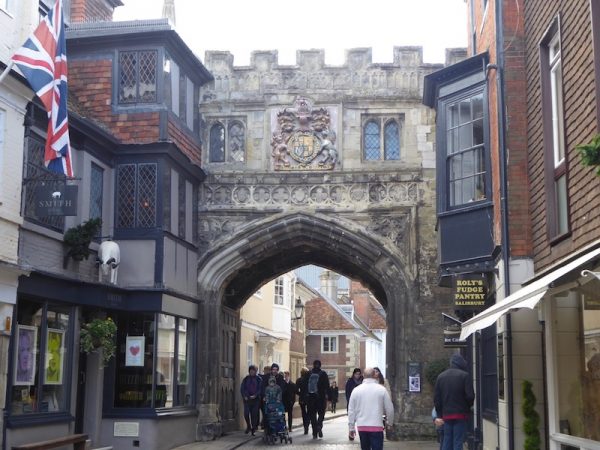 Salisbury is a city that has been in the news for all the wrong reasons in 2018.  The Novichok poisoning of Sergei and Yulia Skripal in March grabbed the attention of the world’s media. Just when things seemed to be quietening down came the tragic death of Dawn Sturgess who came into contact with a perfume bottle containing Novichok.  Following this came what appears to have been a  publicity stunt resulting in a restaurant being closed for several days.

This year as we travelled around, peoples first question on hearing we were from Salisbury was to ask how safe is it to visit. The impression folk have had is that the City has become a ghost town.  My experience is that it has been busy and few have been deterred from visiting. Today, as I walk through the streets on a Friday morning, there are loads of people around and the car park was very busy.

After walking along the High Street I go through the High Street Gate which was built between 1327 and 1342 and is the main entrance into the Cathedral Close.  Within this gate was a small jail for those convicted of offences within the confines of the Close.

Walking past the Cathedral I stop briefly to look at some of its ornate stone carvings.  It is easy for your attention to be drawn to the spire but the building abounds with fine detailed carvings.  This is a place I should visit more often. 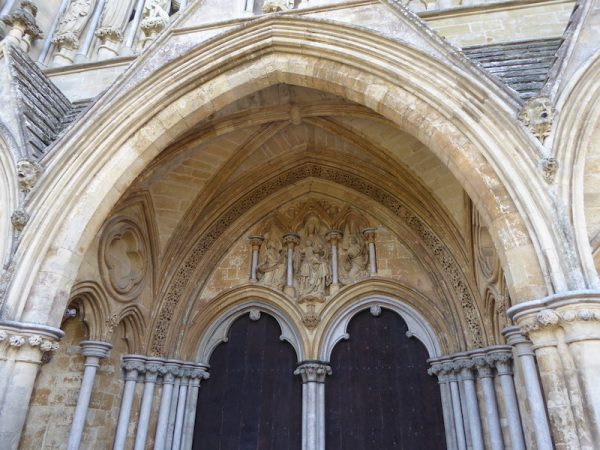 I leave the Cathedral Close, the largest in the country, by the 14thcentury Harnham Gate. 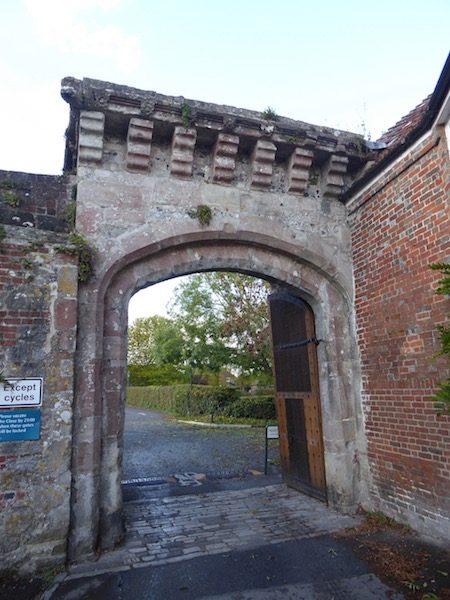 At a junction I turn right into St Nicholas Road and then cross the River Avon. 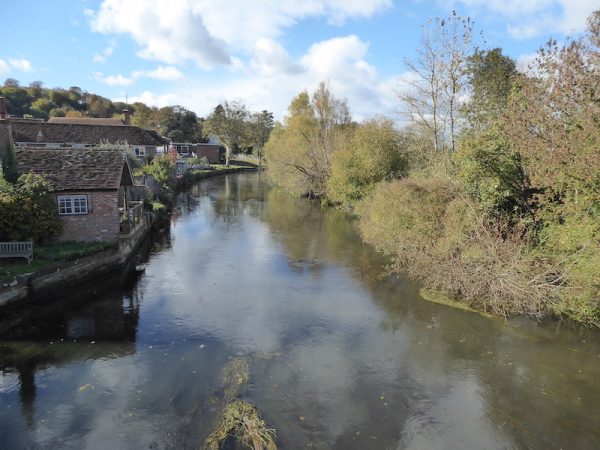 At a fork in the road I go right along Harnham Road, passing the Rose and Crown Hotel and then cross the busy A3094 to head up the Old Blandford Road.  After a couple of hundred yards I take a footpath on the right which leads through the bottom of the woodland at Harnham Slope. 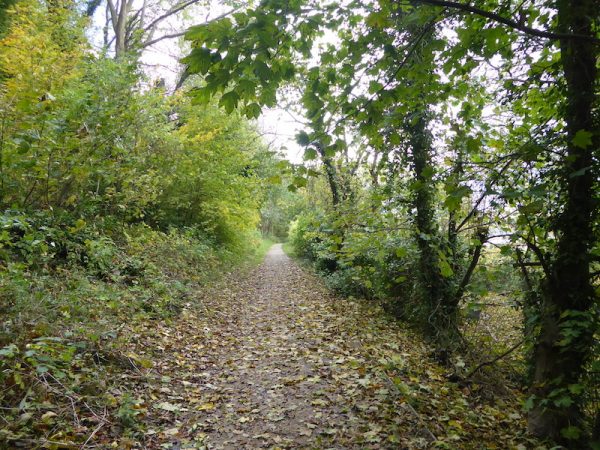 There are a network of paths leading from this one, but I ignore these until I have passed a school on the right and then reach steps on the left.  I take the steps to the hilltop and turn right along a footpath then quickly left on a fenced footpath between houses.  On reaching Harnwood Road I turn right and follow this road round until it reaches the Old Blandford Road where I turn right and then immediately take the right fork down Shaftesbury Drove. 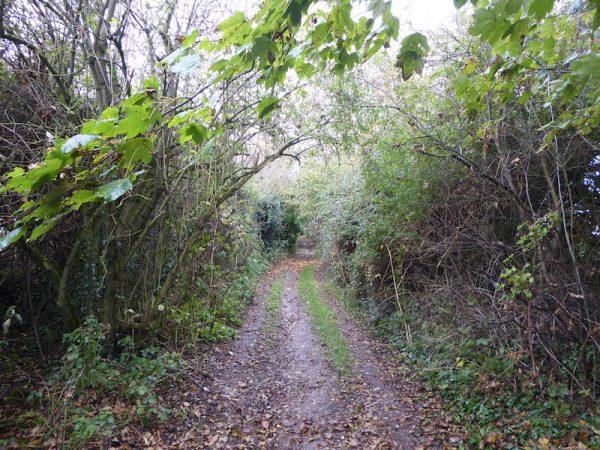 After passing houses this drove becomes a footpath and continues straight on to reach the Old Shaftesbury Drove a tarmacked lane which is soon littered with discarded vehicles and other paraphernalia.  As the tarmac lane ends the drove carries on along a hedged route to reach the eastern end of Salisbury Racecourse. 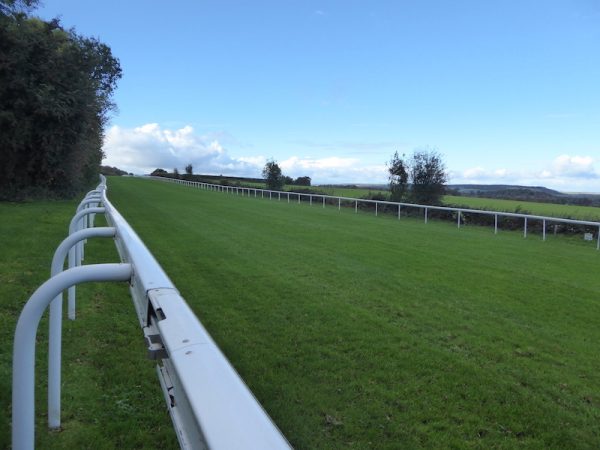 The drove continues besides the racecourse with stunning views out to the right. 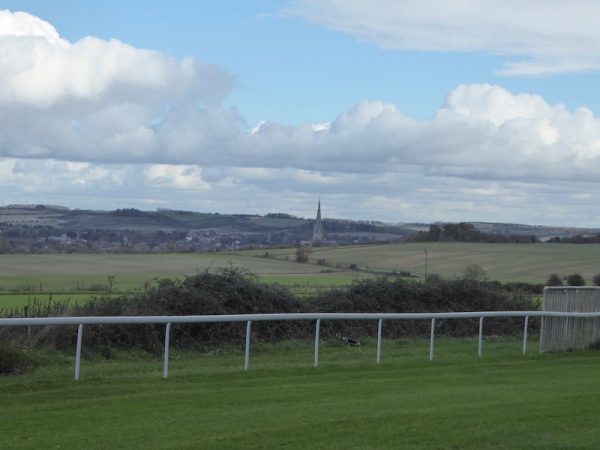 Apparently horse racing started here on the race plain in the mid 16thcentury and a race named the City Bowl started here in 1654 and is thought to be Britain’s oldest named race. 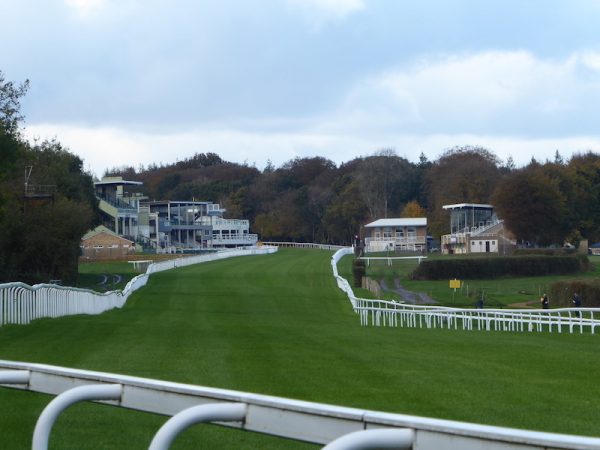 I am not a racing man; over the years I have only been to a handful of meetings here and then only as part of a group out for a social occasion.  I know it is popular with many, but I always find it difficult to see what is going on and the race is over before it seems to have started.

Passing behind the main grandstand I pass stabling on the left and then on the verge spot the remains of Cowper’s Cross which has a bench mark carved into its north eastern side.  I am into bagging trig points, but not averse to collecting the odd bench mark along the way. These played a significant role in the mapping of the country and were used to ensure that the level rod, used to work on the elevation between two points, were always located in exactly the same position. 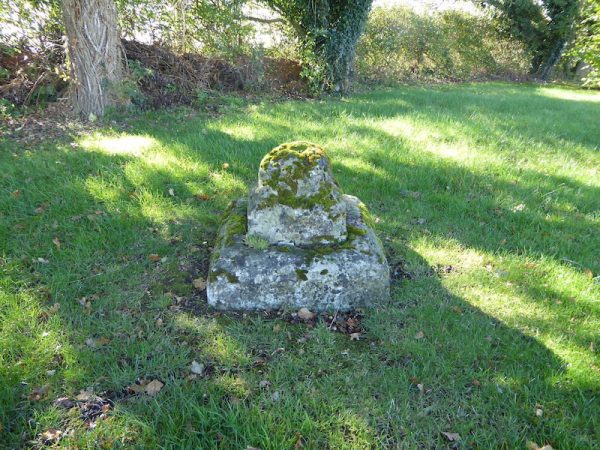 On reaching a minor road I turn right and walk along the western end of the racecourse. 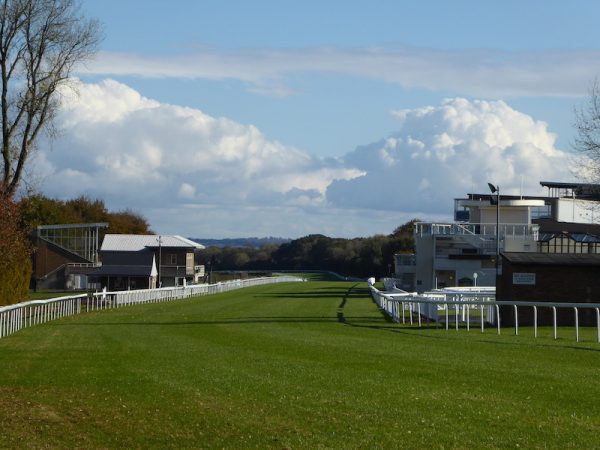 I follow the road downhill to reach a lane on the right leading up to the car park of the Bibury Golf Course, this is a “pay as you play” 9 hole course which was developed from the original Old Course at Salisbury and South Wilts Golf Club.  According to the club’s website the course dates back to 1888 after the then Bishop of Salisbury, Bishop Wordsworth, had holidayed at St Andrews. Originally the course was eight holes and was extended over the years to create the 18 hole Cathedral Course and the nine hole Bibury Course.

In the early 1970’s I was a junior member of this golf club, with a natural left to right shape to my game I struggled to keep the ball on the course.  Since then the course has altered significantly but it is over forty years since I played here. 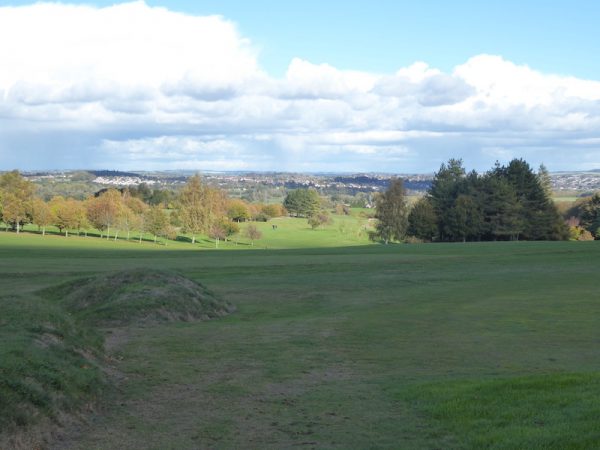 Following the footpath through the Bibury Course I stop and take in the view of Salisbury Cathedral. 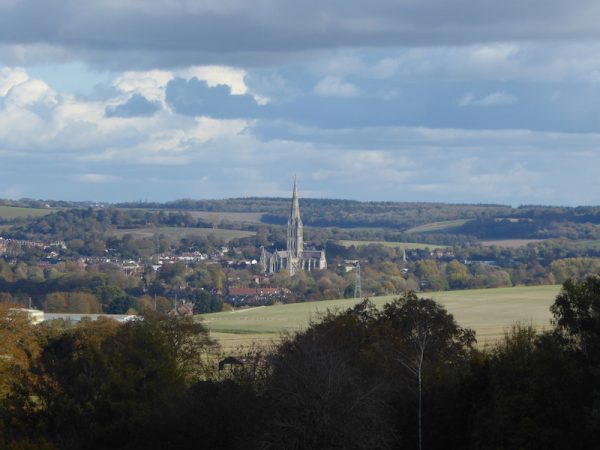 I then follow the footpath as it turns left to follow the course of the old Roman Road running besides the last four holes of the golf course. 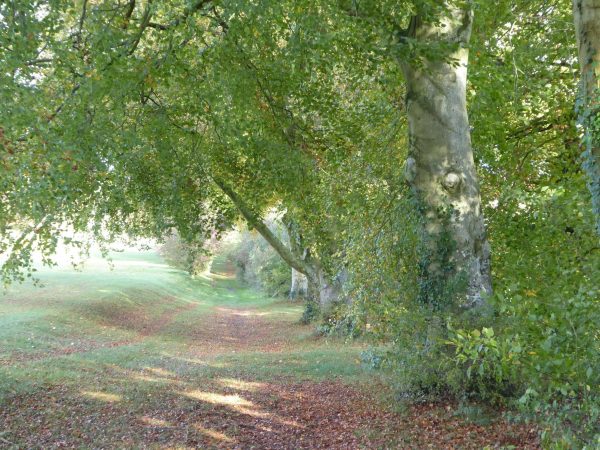 On joining the driveway to the course I continue downhill to cross the A3094 and go through a gate opposite to join a footpath that soon turns to the right to head diagonally across a couple of arable fields with views of the cathedral spire in front of me. 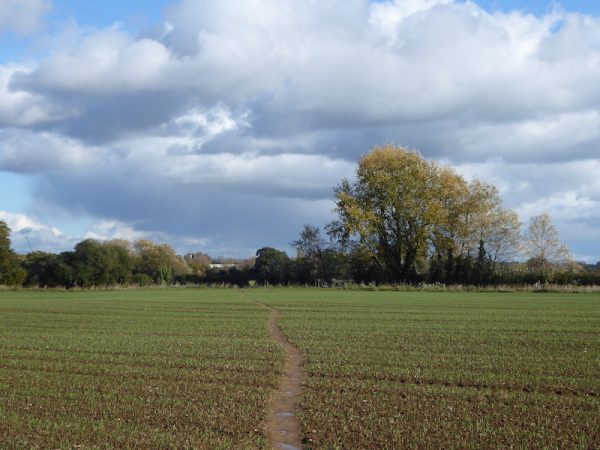 After going through a kissing gate I turn right and follow the footpath alongside the River Nadder. 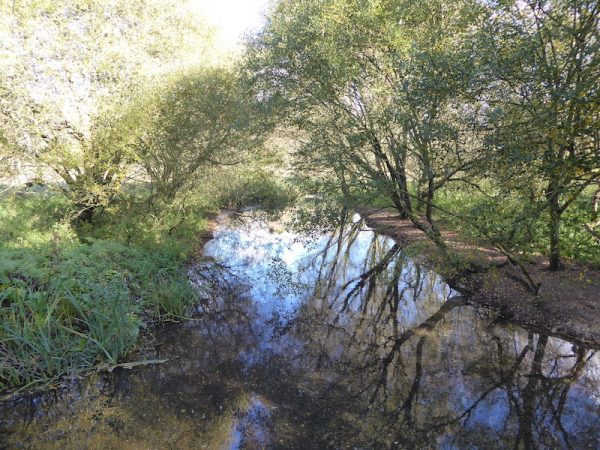 On reaching a road, Middle Street, I continue straight ahead until I reach Town Path on the left. Here I turn and walk down to the Old Mill pub which benefits from an idyllic setting by the river. 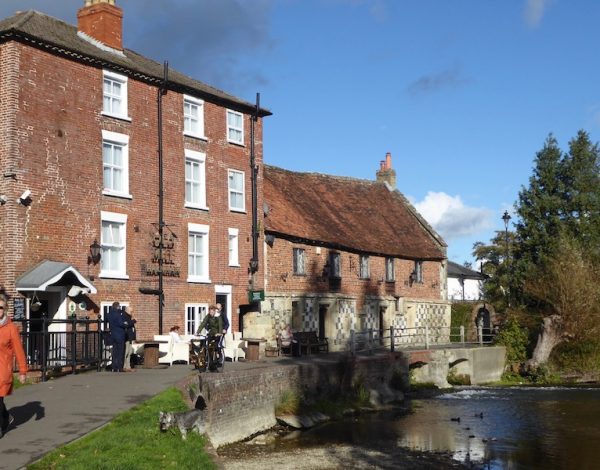 It is many year since I was last here, which is surprising as it is only a few minutes walk from the centre of Salisbury.  It is a cracking spot. 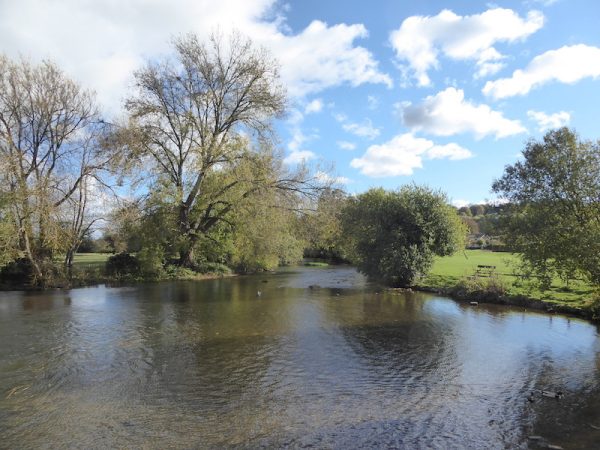 From here I continue on the Town Path towards Salisbury, stopping to take in the view of cathedral. 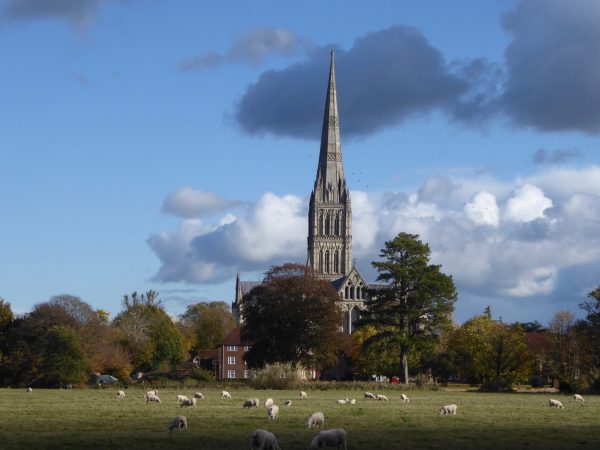 On reaching Mill Road I turn right and then just before crossing the river Avon take a left down Water Lane to walk besides the river. 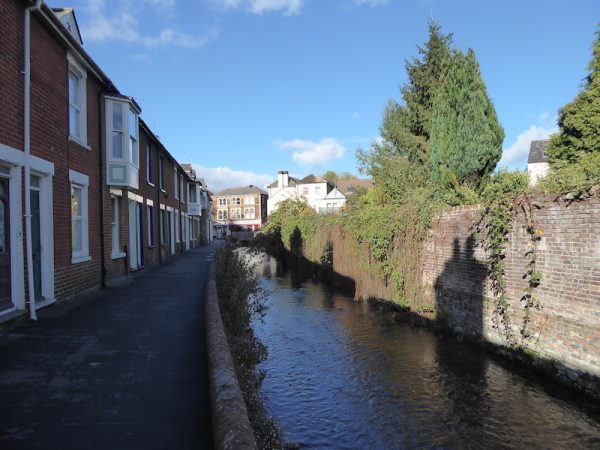 Now I head back to the Central Car Park to meet up with Lynnie.  My walk has covered over eight miles and despite being so close to home has covered footpaths I have not previously walked.  It has been a cracking circuit; I will have to make a point of doing more walks starting from the centre of Salisbury in the future.

To view this 8.5 mile walk on OS Maps Click Here 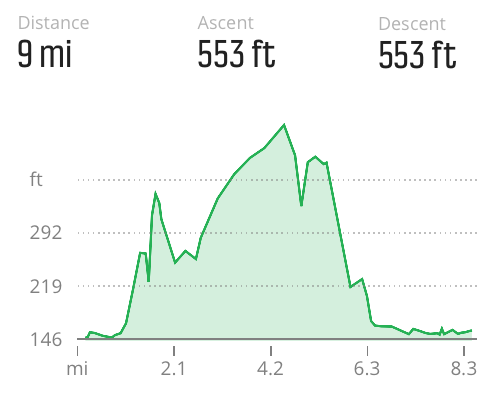