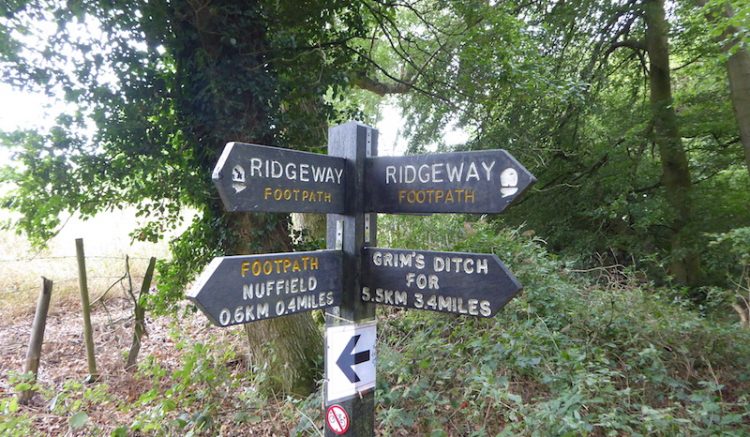 During our stay at Cholsey Grange last August we did a delightful walk that took us through the attractive village of Ewelme which is just a few miles drive from the caravan site.

We park in the centre of the village close to the village hall and then head along the High Street passing the village pond on our left. 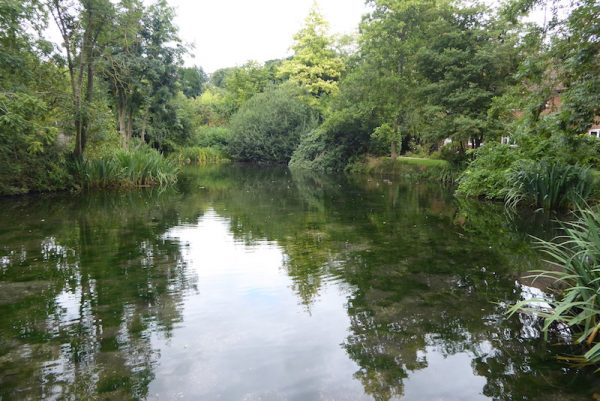 There are some lovely old cottages lining the High Street. 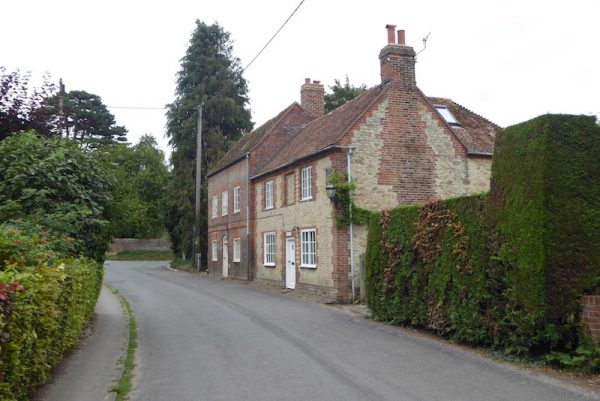 At a junction we continue straight on, still on the High Street, to pass the attractive village primary school that was originally founded in 1437 by the Duchess of Suffolk, Alice Chaucer (the granddaughter of Geoffrey Chaucer).  The medieval buildings are still used today as classrooms. 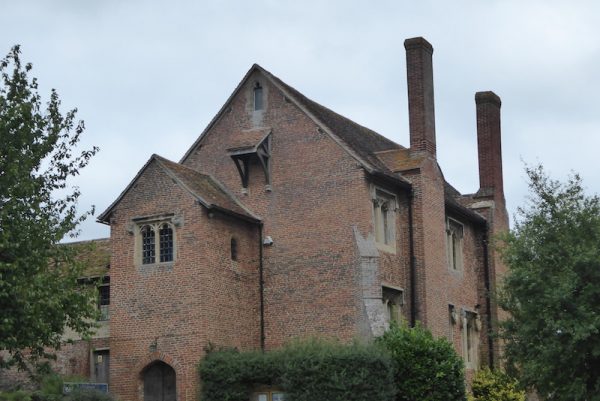 On reaching a metal gate to the playing field we turn right to follow the Chiltern Way way-markers along the edge of the sports field and stay on the Chiltern Way as it turns to the left heading towards Potters Lane.  After crossing the minor road we head along Potters Lane with some great views across the fields. 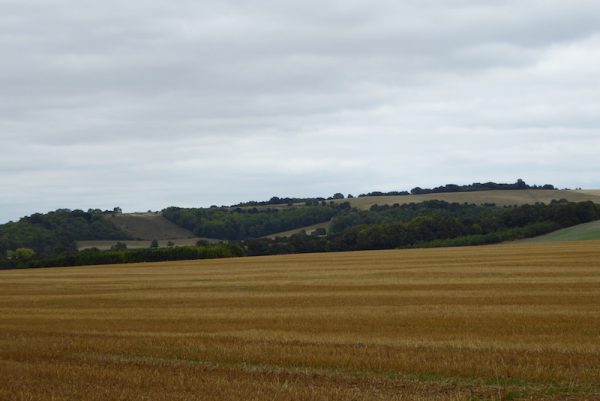 After passing farm buildings we ignore the footpath on the right heading down to Potter’s Farm and shortly afterwards fork right and then follow the path along the edge of fields to head towards Harcourthill Shaw.

At a junction of paths we keep to the left and carry on to go through the edge of Oakengrove Copse and then at a crossing of paths turn right to join the Ridgeway footpath heading across an arable field. 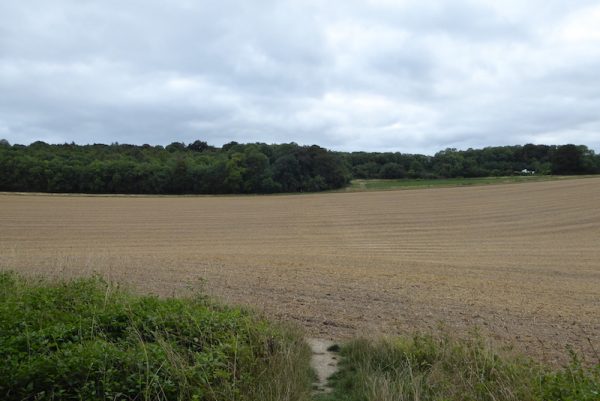 We then enter woodland to reach the busy A4130 at Gangsdown Hill.  We turn left walk besides it for a short while before crossing the road by the former Crown pub and following the Ridgeway footpath around a construction site for new houses before emerging on the edge of Huntercombe Golf Club. 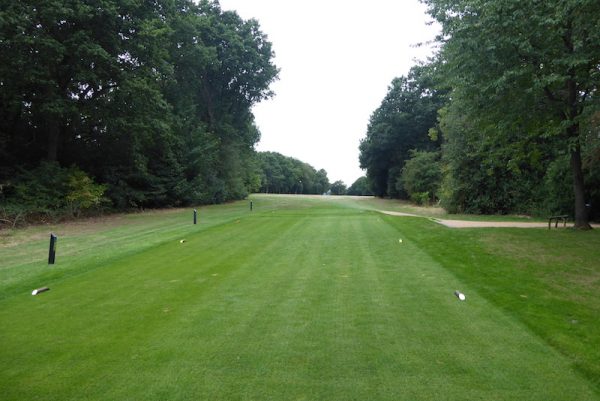 Huntercombe Golf Club was formed in 1901and according to the Club’s website had some interesting ex-members including Gloria Minoprio the notorious “one-club’ golfer who used a “cleek”, a club similar to a one or two iron, for all of her shots and perfected the use of the club to such an extent that she competed at the highest standard in the English Championship in 1933 held at Westward Ho! She lost the match but caused a stir by wearing trousers, the first time a female competitor had ever done so.  She returned again for the 1934 championship at Seacroft in Lincolnshire winning her first match before going out in the second round.  The noted golf correspondent Henry Longhurst, also a member from 1951 to 1955, reported that she was “a most accomplished player, handicapped only by her refusal to use the instruments which make the game most easy”.

Another notable member was Ian Fleming most famous for writing the James Bond books, but also the author of Chitty-Chitty-Bang-Bang, the magical car.  This book was made into one of my favourite films.  Fleming was a member here for 32 years until his death in 1964.   The club’s website recounts how at the start of a golf match James Bond tells Goldfinger that he played off nine at Huntercombe, which was also Fleming’s handicap. 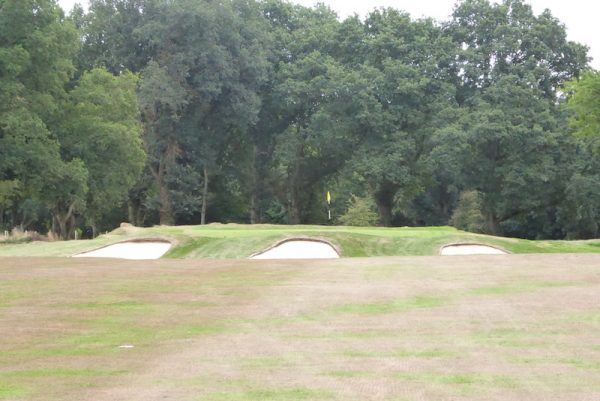 After crossing a couple of fairways the path goes past the clubhouse and then enters a field, as we reach the hedge I take a diversion along the hedge line to bag a trig point tucked away on the edge of the field.  This is number ninety for me. 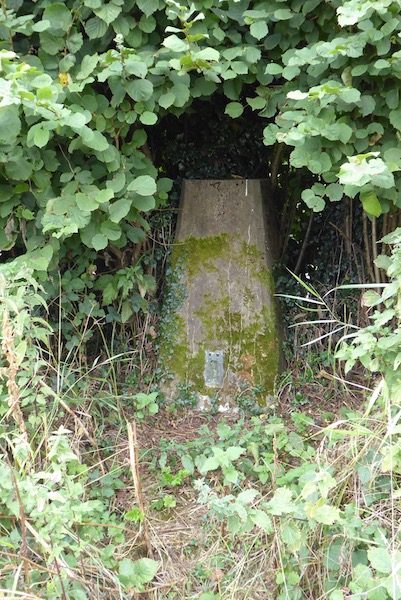 Returning to the path we join a lane and then turn right to pass Holy Trinity church which is apparently the resting place of Lord Nuffield, formerly William Morris, the founder of Morris Motors who lived at nearby Nuffield Place for thirty years until his death in 1963. 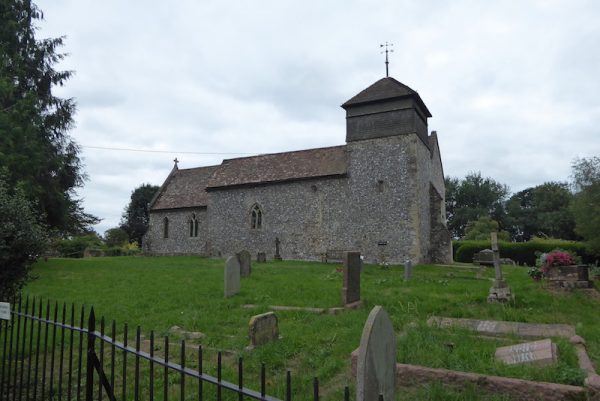 Still on the Ridgeway path we follow the lane out of the village we then take a path on the left through a gate with fine views across the vale. 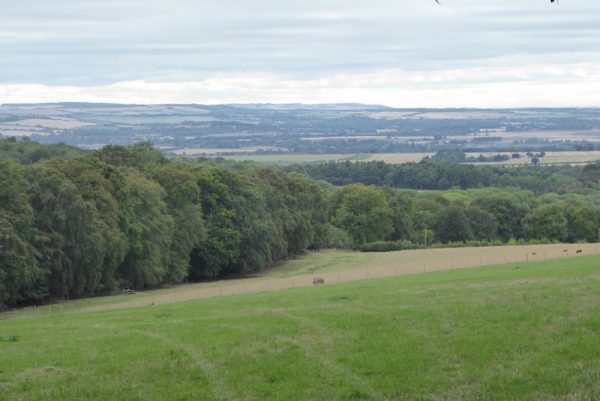 At the next junction of paths we turn right to stay on the Ridgeway, this route is also marked for Grim’s Ditch.  Now our route continues along the line of Grim’s Ditch.    This name is attached to a number of earthworks in southern England dating from around 300 BC.  Their origins are unclear, but are thought to mark territorial boundaries and their construction was via digging a deep ditch and using the spoil to create an embankment. This particular ditch is well defined and an impressive site. 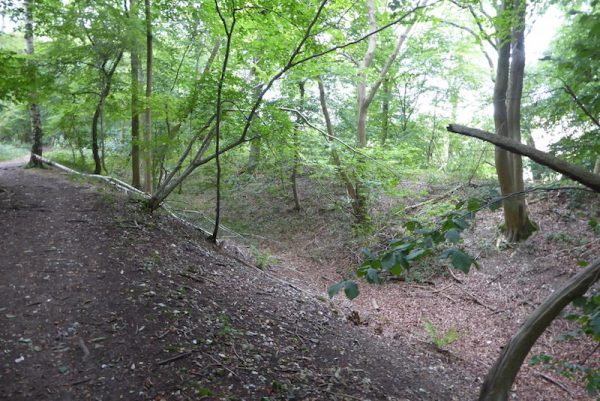 We stay on the ditch crossing two minor roads until we reach the trig point on the ditch pathway, number ninety-one bagged. 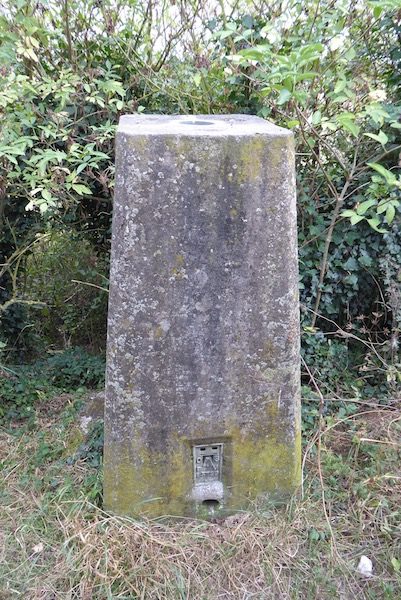 Having bagged the trig point we turn back on our selves to along Grim’s Ditch, much to Lynnie’s annoyance. She is happy when we encounter a trig on a walk, but does consider it a bit obsessive when we make a detour just to bag one.

We cross the first road we reach and then turn left at the second to follow the combined route of the Chiltern Way, Swan’s Way and Icknield Way soon passing Blenheim Farm with its OS benchmark on the wall of the house. 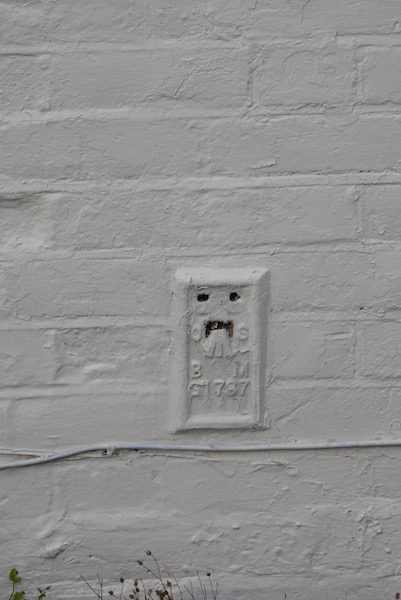 At a junction we go straight ahead and then very soon after reach the A4130 which we cross to join the Old Icknield Way.  The roadside is strewn with litter and after passing the entrance to the waste-recycling centre we encounter items dumped in the hedge, presumably by those who have arrived when the site is closed and cannot be bothered to take their waste back home.

On reaching the road, Beggarsbush Hill, we turn right and then quickly left, cross the road and then take a left to join Day’s Lane which is signposted to Ewelme and Benson.  As we wander along the road the view of Didcot Power station dominates the skyline to the west. 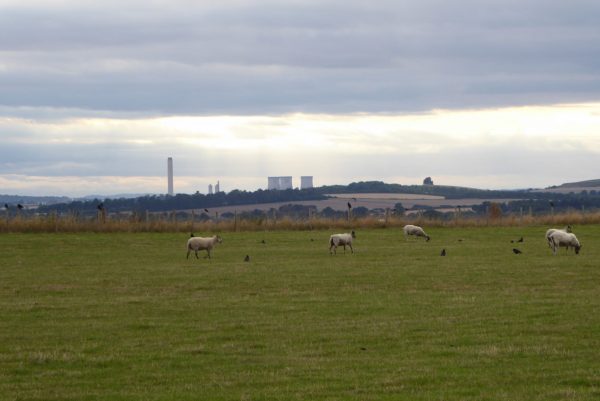 We now follow Day’s Lane all the way back into Ewelme.  Our walk has covered ten miles, which has been far enough on yet another hot afternoon.