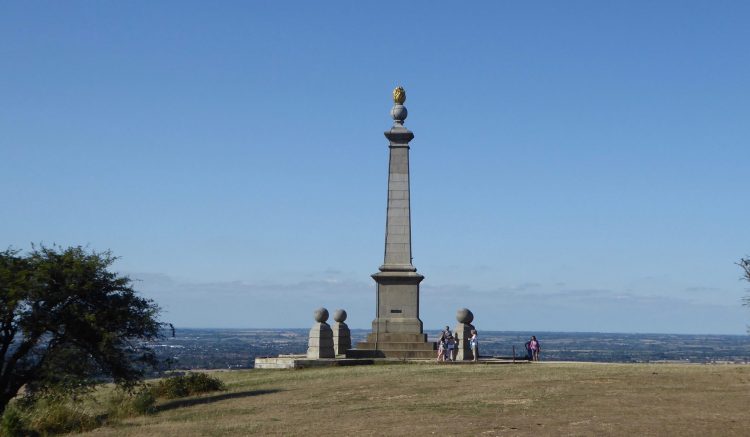 After our walk along a section of the Ridgeway last week we are keen to explore more of this National Trail.  In particular I want to bag the Ordnance Survey trig point at Coombe Hill and visit the nearby monument.

Our starting point is in Princes Risborough in the public car park in Statton Road, close to St Mary’s church.  Leaving the car park we walk along Church Street into the attractive town and then turn right along the High Street and then left into Bell Street before crossing the road opposite the Post Office where we pause at the roundabout to look at the Pudding Stone. 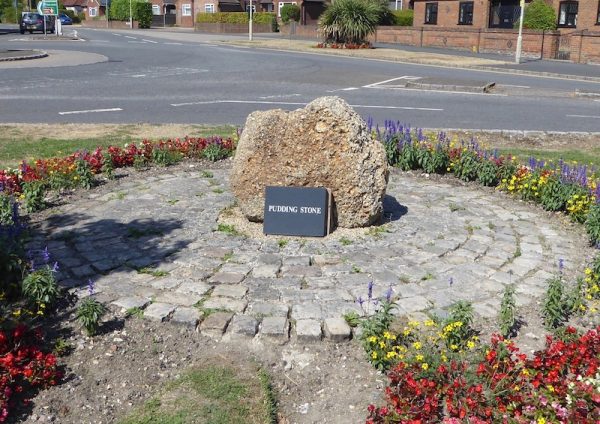 The information board explains that “Puddingstone boulders such as this are thought to have been used as way-markers by prehistoric man, and this one stood in Back Lane, though latterly largely unobserved and buried for all but a few inches. It was moved to its present prominent position when the lane was widened in 1984. Puddingstone is one form of what is generally called ‘sarsen’.  Laid down some 50 million years ago, when this region had a hot tropical climate, as a layer over the chalk known as silcrete, it was broken into blocks by the freeze-thaw action of the Ice Age less than 2 million years ago, and these blocks were then carried into the valleys by the torrent of melt-water. Most of the setts surrounding the Puddingstone are of a finer grained sarsen, quarried locally at Denner Hill. Once widely used as paving in the town few of these attractive buff stones survive but some may be seen in their original setting under the Market House.”

I find such things absolutely fascinating, I am sure thousands of people pass this stone every year and have no idea about its historical relevance.  It is one of the reasons why I have taken to stopping and reading every information board or plaque that we pass on our walks.  We now head up New Road which gradually climbs upwards to reach a lane named Upper Icknield Way.  We turn left following the track along the route of both the Ridgeway and Icknield Way. 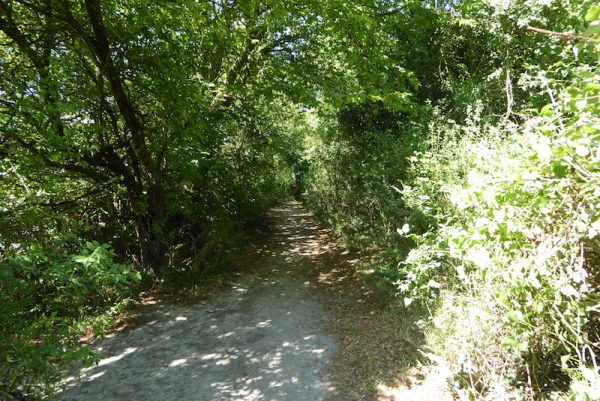 As the path forks we go left to continue on the Upper Icknield Way to reach the village of Whiteleaf. We cross Peters Lane continuing into the village passing attractive cottages and the Red Lion pub. 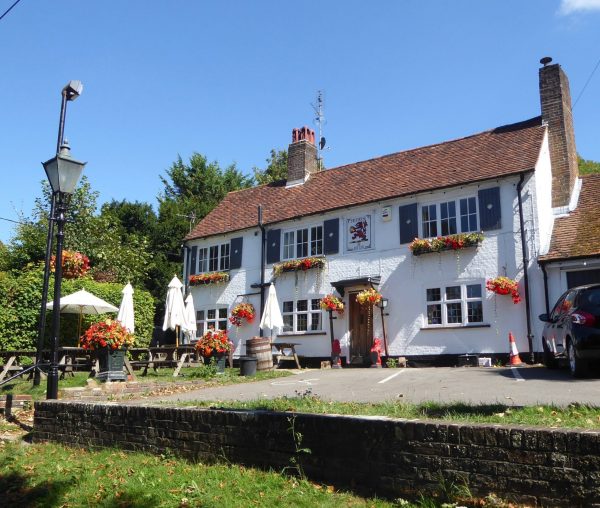 A few hundred yards after the pub we take a footpath on the right along a track climbing steadily along the edge of Giles Wood.  We keep left at a fork in the paths and head around the edge of Whiteleaf Golf Club. 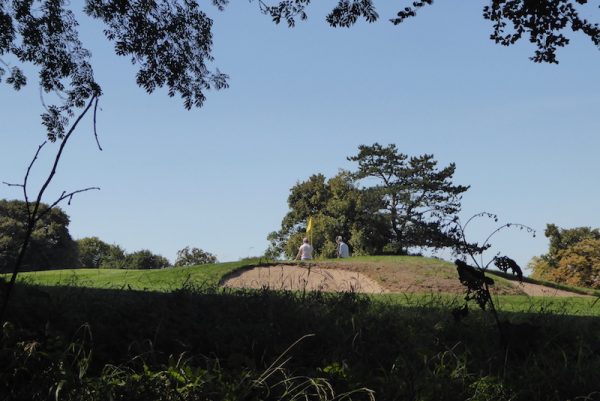 The path leads us into Lower Cadsden and past the Plough pub, which is busy on a warm afternoon. 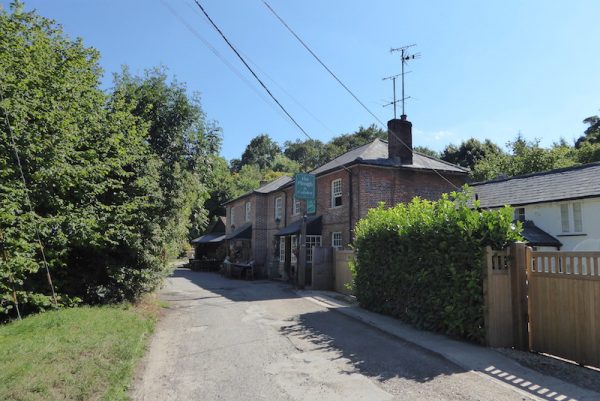 We join the road and briefly walk besides it down Longdown Hill and then turn right at the way-marker for the Ridgeway.  The path leads through a wooded section to reach a gate to enter Grangelands and Pulpit Hill Nature Reserve. 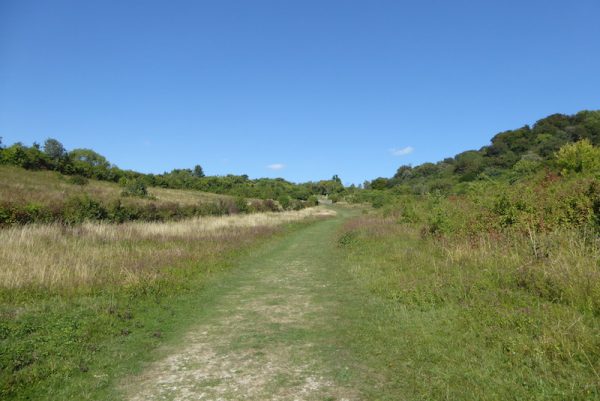 We head steadily uphill through this chalk downland reserve.  There is no breeze and it is very hot as we trudge uphill.  At a crossing of footpaths we continue straight ahead still on the Ridgeway. 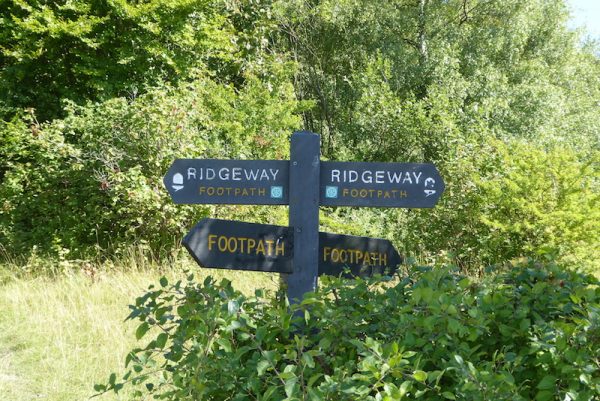 The Ridgeway path now heads through the Old Kimble Rifle Range; the information board at the entrance to the reserve explained that the British Army used it as a practice area from the 1940’s to the early 1970’s. 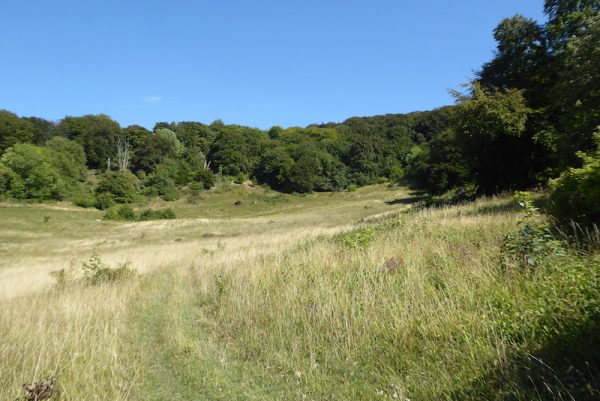 At a junction of paths we are busy chatting and turn right to continue on a track, it is only as we near the top of the hill that I realise we have wandered off the Ridgeway path. Fortunately this is soon rectified by taking a footpath on the left  leading through woodland to re-join the Ridgeway by the edge of a field of pasture. 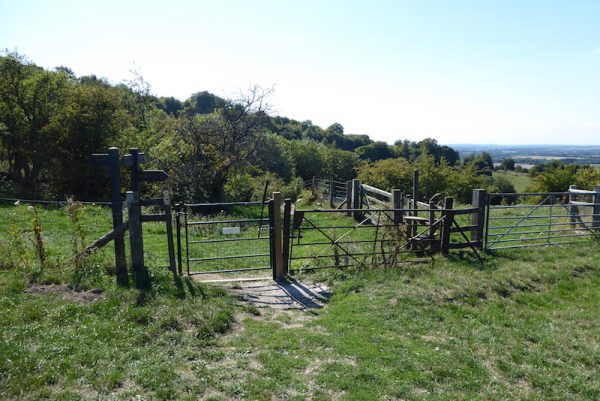 Crossing the field, now on the Ridgeway once again, the path heads alongside Maple Wood with a metal fence on the left with warnings not to enter.  This is a protected area because it is the edge of the Chequers Estate. Soon we get glimpses of the house. 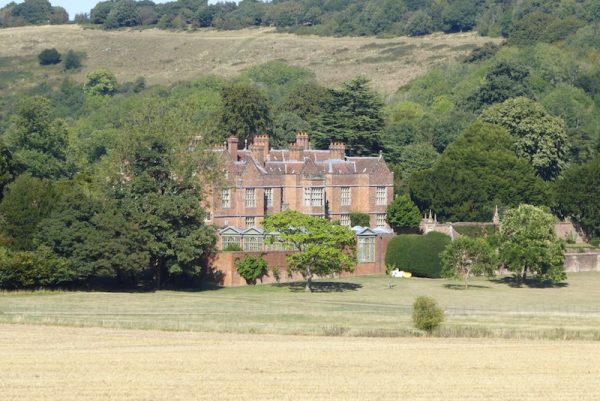 It was originally built around 1565 by William Hawtry who was soon joined there by Lady Mary Grey, the younger sister of Lady Jane Grey and granddaughter of King Henry VII. Lady Mary had been banished from Court by Queen Elizabeth I because she had married without the monarchs consent and she subsequently spent two years confined to this house.

The house had other interesting owners including the grandson of Oliver Cromwell.  In 1909 it was leased to Arthur Lee and his wife, later to become Lord and Lady Lee, they subsequently purchased the house.  During World War I it was used as a hospital and convalescent home, then the Lee’s decided to transfer the house to the nation. Apparently they thought previous Prime Ministers were of the landed classes and therefore owners of a country estate.  However, this did not apply to the then new breed of politician, so the house became the country retreat of the Prime Minister.

During World War II it was viewed as unsafe for Winston Churchill to stay here, so he resided at Ditchley House. Odd to consider the purpose of the house being given to the nation that one of its early incumbents had Blenheim Palace as an ancestral home! Not to mention the fact that the current incumbent and her predecessor are both reportedly multi-millionaires.

We continue along the way discussing how ironic it is that I am walking 2,018 miles to fundraise for the Trussell Trust to support those in poverty within our society, whereas the architects of our current social welfare system have millions in the bank.

The path takes us across the driveway to the house; there are numerous security cameras here.  We speculate if the cattle in the field are real or special forces in camouflage.  After crossing a field we go through a gate with more cameras and then cross a road to continue on the Ridgeway up a track into Goodmerhill Wood. 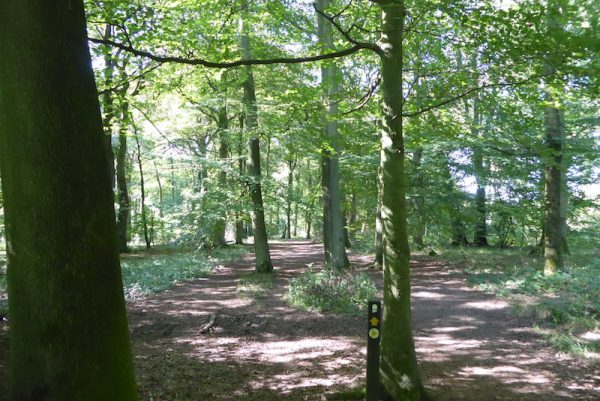 At a junction of paths we follow the Ridgeway way-markers to head north through the trees to a minor road, where we turn right and then after a few hundred yards left to walk through the trees of Lodge Hill.  Soon we are on open downland with views over the back of Chequers and into the valley below. 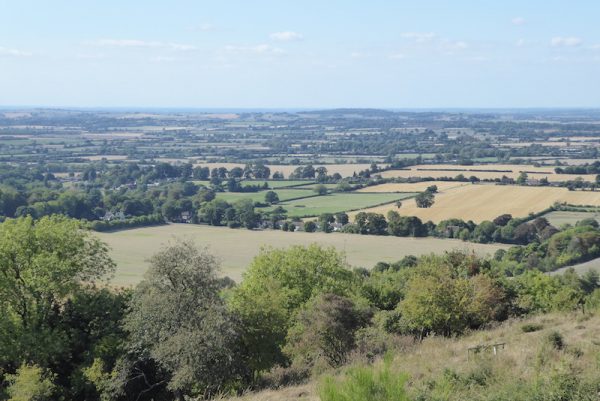 The path continues across the chalk downs to reach the monument to the 148 men from Buckinghamshire who lost their lives during the Second Boer War (1899 to 1902).  Until relatively recently I had known little about the Boer War but after reading a couple of books have found it an intriguing conflict based on maintaining an Empire and controlling diamond and gold rich lands. 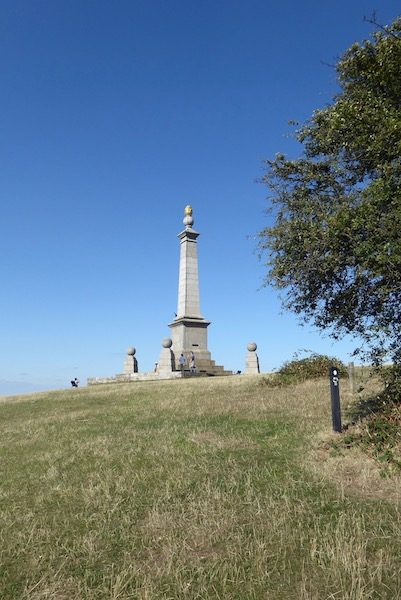 Whatever the reason for the conflict the war involved a lot of people, with the British and Colonial Forces, circa 600,000 far outweighing the 60,000 Boers.  Despite, or perhaps because of, the imbalance in numbers the British and Colonial losses totalled 22,092 (14,210 of whom died of disease).  This monument at Coombe Hill was erected in 1904 by public subscription and is a local landmark. 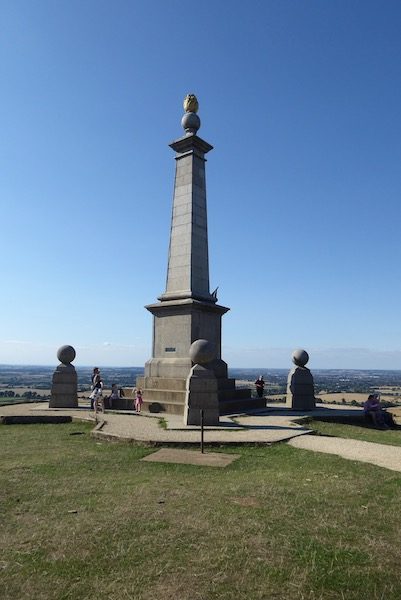 It 1938 the monument was struck by lightening and rebuilt the same year.  Arriving here today it seems to be a popular spot with families enjoying the open space and taking in the stunning view. 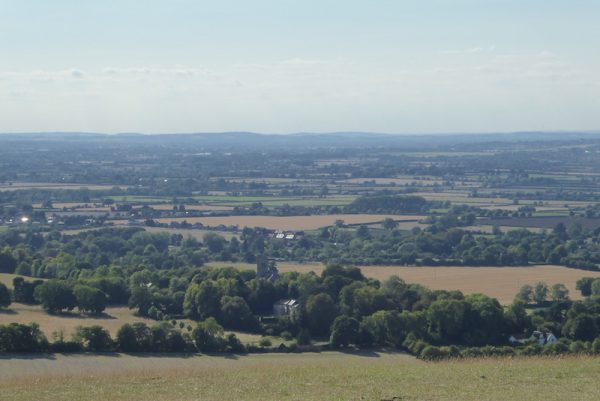 I take a moment to wander across to the trig point, the eighty-eighth I have bagged. 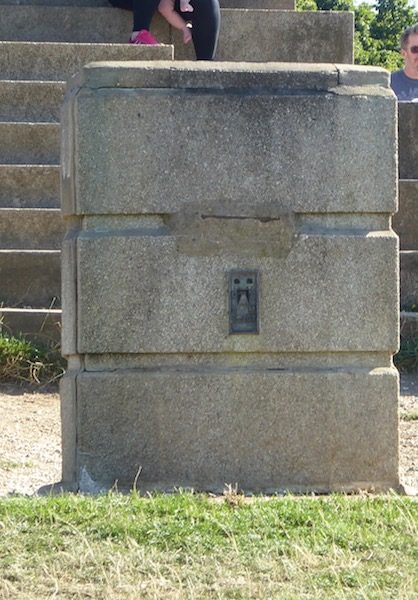 Resuming our walk we leave the Ridgeway path and turn south to head across the open land of Coombe Hill towards the car park at Low Scrubs.  After going through the car park we enter woodland and follow a path with the road to our right.  There are various paths leading to the left but we keep right through the woods to join the road.

As the road enters trees we take a footpath sign on the right by a five bar gate.  We are now walking through Fugsdon Wood; a cracking bit of woodland. 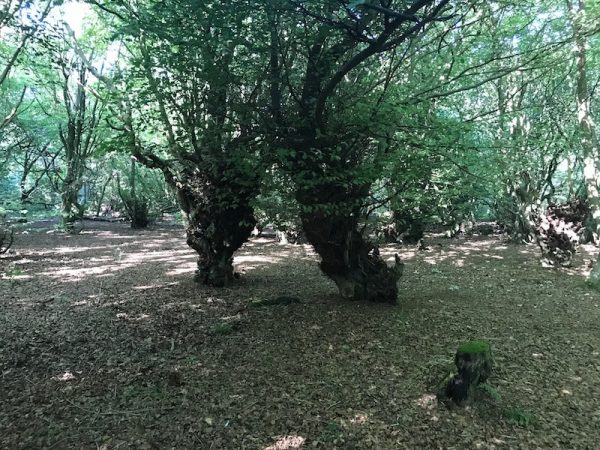 The path heads in a southerly direction to reach a tarmac lane which does not look like it gets a lot of traffic. 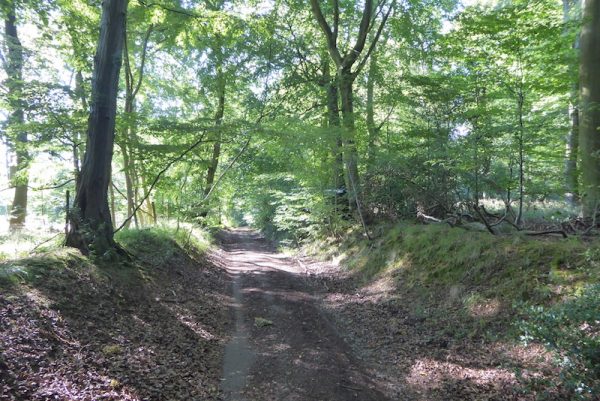 We turn right and follow the lane until we reach a footpath on the left where we turn into Hengrove Wood, at a junction of paths we turn right and follow this route down towards the road.  We immediately regret not taking the footpath that led through the trees and then past Dirtywood Farm, the road we have reached is very busy with little space on the verge.  Unusually for us I decide that the safest option is walking along the edge of the recently harvested field to join the footpath leading down from Dirtywood Farm.

We cross the road and enter woodland following the footpath signs, it is clear that you are not welcome to err from the pathway, at a junction of paths we turn left and follow a track in front of Solinger House.

At a crossing of ways we continue straight on into Knighton’s Hill Wood, staying on this path until we reach another crossing of paths where we turn right through the woods and then besides a field as we head towards Green Hailey Farm.  The farm drive leads to a road where we turn right and after a few hundred yards turn left along another road.  Here I pop through a hole in the hedge to bag the trig point in the corner of the field, my eighty-nineth. 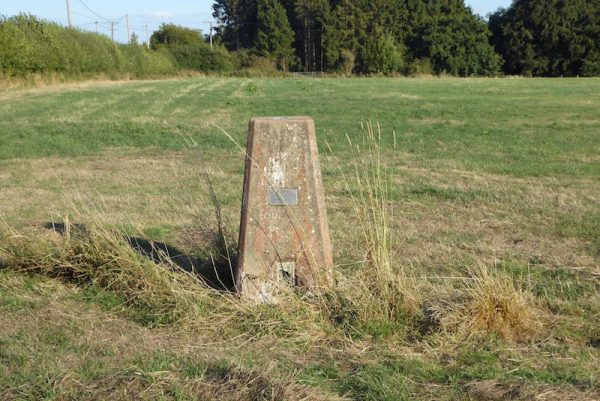 We carry on besides the road until we reach a public footpath sign on the right and enter a beautiful area of downland. 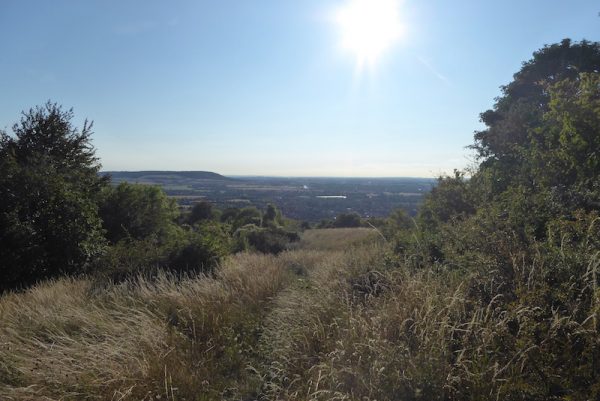 The path descends steadily eventually reaching some steps which make the steep descent easier. This route delivers us back to the point where we left the Upper Icknield Way close to Princes Risborough.  We turn left following the track back to New Road and then turn right to retrace our steps back into the town. 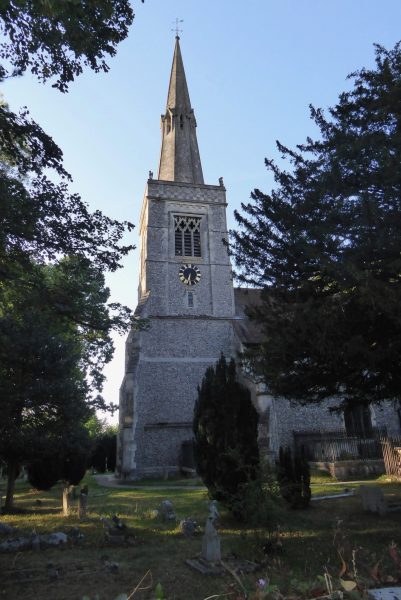 We have covered over eleven mile on a warm afternoon and we are all ready for a rest and a reviving drink before planning tomorrow’s outing.