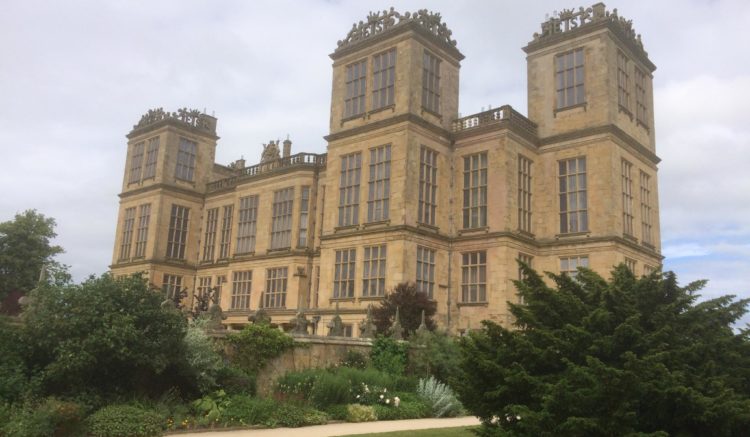 We are nearing the end of our stay at Tax Farm CL and Lynnie is keen to visit nearby Hardwick Hall on the other side of Chesterfield.  Whilst she is viewing the house I plan to explore the local area.

Hardwick Hall was built between 1590 and 1597 for Bess Of Hardwick; she also had Chatsworth House built. Ownership of the house was transferred to the National Trust in part payment of death duties due after the unexpected demise of the 10thDuke of Devonshire.  Passing this property to the National Trust enabled the family to retain Chatsworth House.  I leave Lynnie to wander around and view the large collection of embroideries and other delights of the property whilst I explore the surrounding countryside.

Leaving the car park I head back along the entrance drive passing a large grass embankment, I wander up to see what is behind it to find it has been put in place to obscure the driveway from the house. 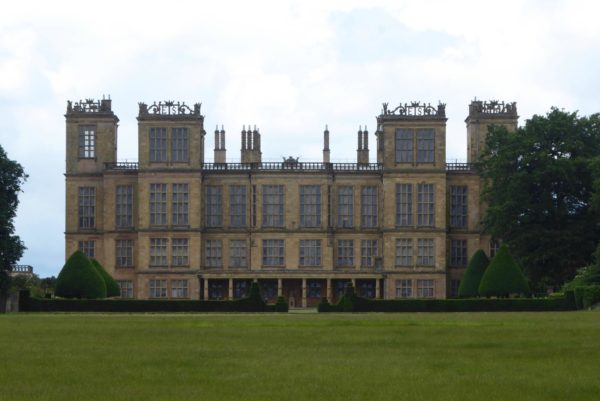 On reaching the entrance booth I continue along the driveway and where the main visitor entrance swings to the left I continue in a straight line through a tree-lined route. On reaching the lodge house I go through a gate and continue along the road to a junction.  I turn right and follow the lane into the hamlet of Rowthorne.  I pass Hall Farm, Pear Tree Farm and Top Farm as I walk through the village and then turn right along Dale Lane.  Staying on this lane as it turns sharply left to head up to the A617 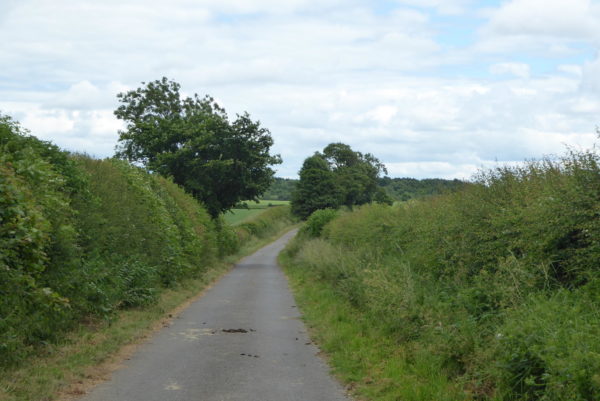 Crossing this busy road with care I take a footpath opposite that leads across a field to reach another lane.  Here I follow the tarmac road, Green Lane, ignoring Greer Lane on the left.  Green Lane leads me into the hamlet of Stony Houghton.  At a junction I go straight on and then almost immediately the road swings to the right on a sharp bend, here I go straight on following a lane passing a telephone box and post box before continuing along a track, Water Lane, when the road swings to the left.

It is a warm afternoon and there is welcome shade from the trees and hedges.  The dogs get some welcome refreshment from the stream running alongside and then across the track. 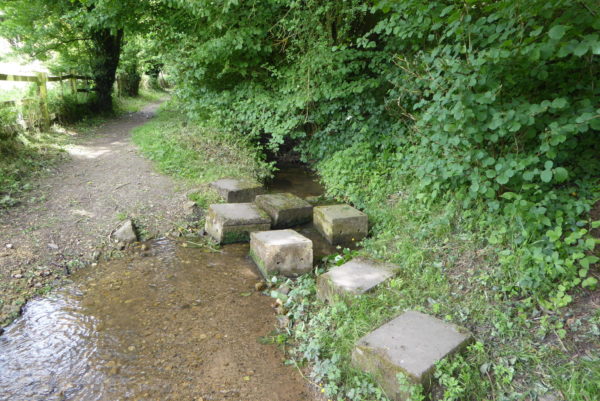 The track becomes Balkham Lane and continues on to meet a road besides an electricity sub station. At this junction there are two lanes leading to the right I take the one that heads south east, Green Lane, after crossing the B6407 the lane continues straight on to reach the driveway to Pleasley Park.  I turn right and walk up the drive to reach the small car park and entrance to the woods. 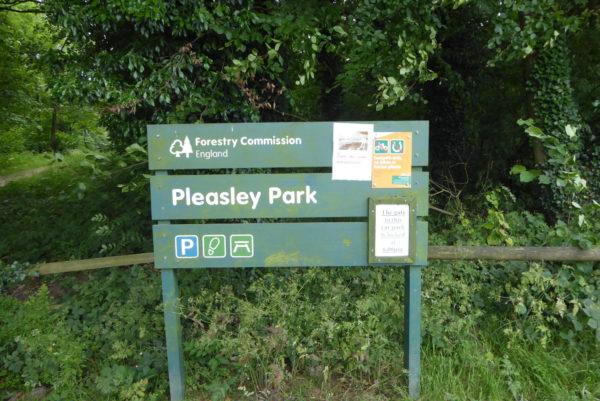 This is a pleasant area of woodland covering about 180 acres and there are a network of paths. 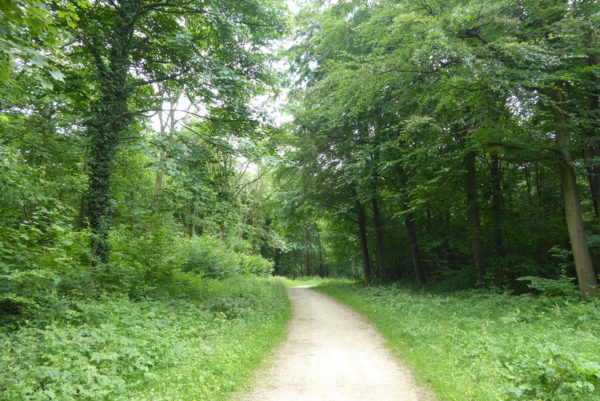 I head south along a broad track ignoring all turnings to the left and right until I reach a T-junction of tracks at the southern end of the wood.  Here I turn left and head east gradually descending to another T-junction of tracks near the eastern edge of the wood.  I turn right descending steeply before turning right again to walk along a field to a gate onto a minor road.  I turn to the right and follow this minor road, passing a war memorial. 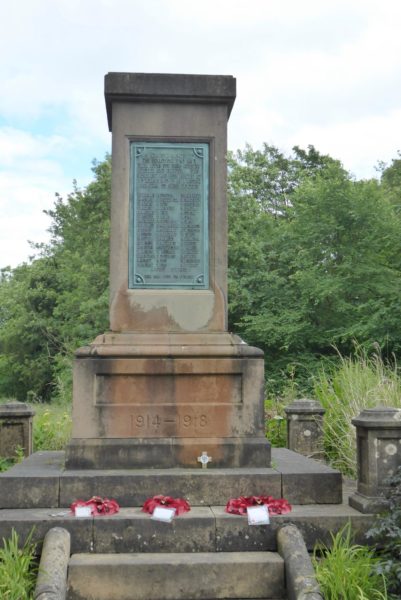 Continuing on the lane I reach the large car park for the workers of Pleasley Mill, the footpath continues along the lane passing Pleasley Vale Mill 3.  This the largest of the three mill buildings on this site and confusingly was the second to be built and was once known as Lower Mill.  There is a very good information board explaining the history of the mill.  This cotton mill was originally built in 1792, fire struck it in 1844, however, it was soon rebuilt and re-opened in 1847.  The mill closed in 1987 and was purchased by the Council for £1 and converted onto a business park. 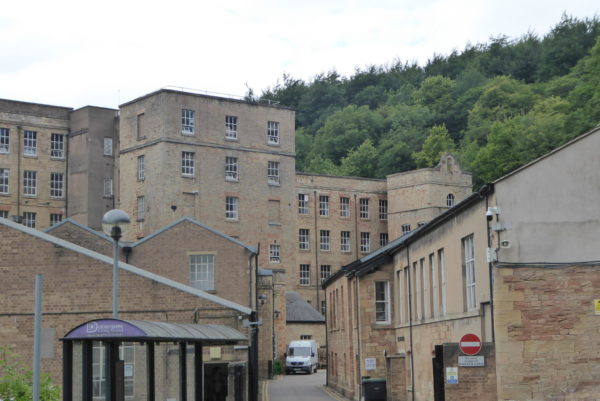 Following the lane and being watched by CCTV cameras, I continue along to Pleasley Vale Mill 2 completed in 1913.  As well as being involved in clothing manufacture this mill was used a munitions factory during World War 1. 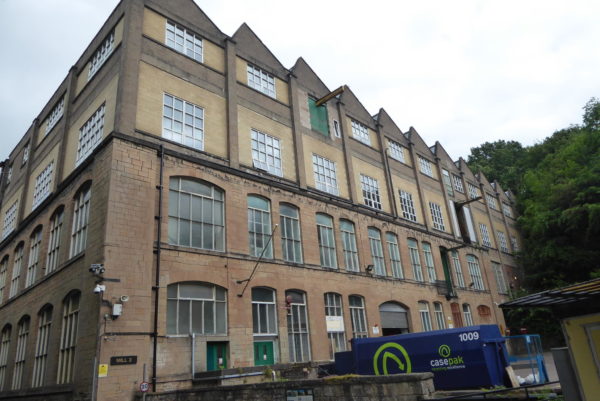 The information board here recounts a legal case in 1838 between the Mill owner Henry Hollins and John Walker the father of five children employed at the Mill.   John Walker withdrew his children because Hollins reduced their combined wages from 17 shillings and nine pence a week to eleven shillings and eleven pence and then halved their pay.  Hollins initially won the case and the children were sentenced to three months hard labour, but after an extensive campaign that eventually reached parliament the sentence was reversed. Hollins was not happy with the outcome, nor were the local magistrates, history shows that Hollins’ company went on to be very successful but there is no mention of the Walker children.

Fortunately in 1841 Henry Hollins retired and his son William took over, he had a different view of how to treat the workers and is recognised for building a school, institute and library for the use of his workers. 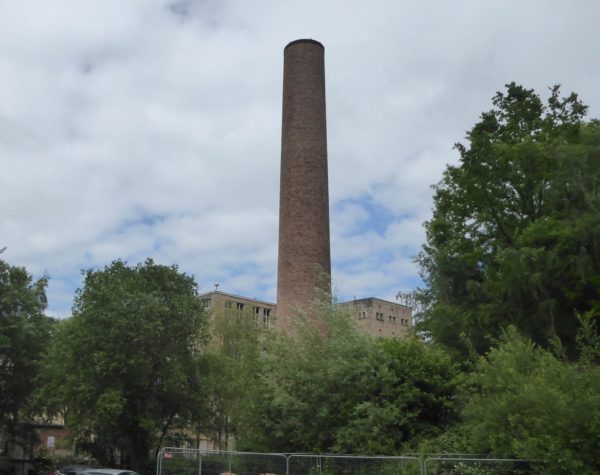 The final mill is Pleasley Vale Mill 1, or Upper Mill; this mill was originally built in 1784 and was key to developing the cotton industry in this area.  The mill burnt down on Christmas Day 1840 but was soon rebuilt and is notable because it was here in 1893 James and Robert Sissons developed Viyella which composed of 55% merino wool and 45% cotton and claimed to be unshrinkable.

Walking around the mill pond I walk through a car park and then follow the footpath signs to reach a disused railway track and follow this route into Pleasley. 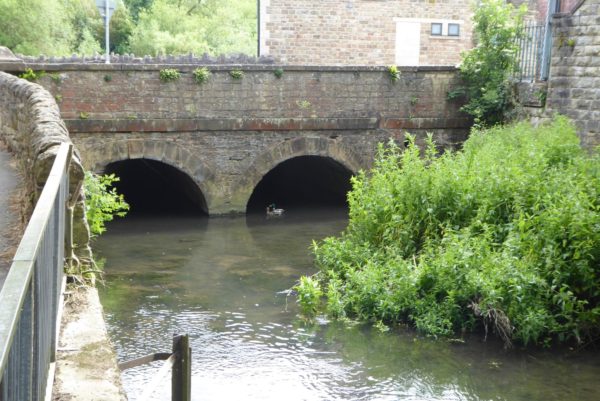 On reaching Chesterfield Road I turn right uphill to soon pass the Nags Head pub, which looks like it has ceased trading, and then reach the old 13thcentury Market cross. 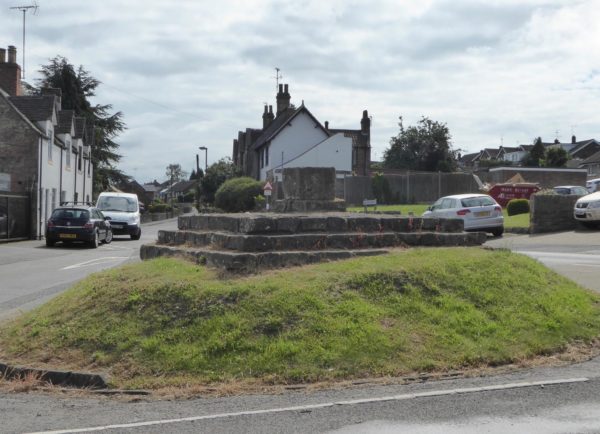 Carrying on up the hill I turn left just after the Pleasley Miners Welfare Social Club and walk through the car park to join a footpath that follows a disused railway line. 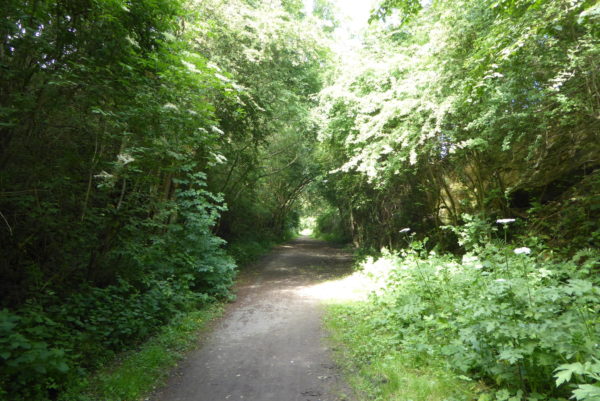 This line served the Pleasley Colliery; the mine was opened in 1873.  The information board at the mill stated that Florence Nightingale, a local resident, cut the ground for the mine, apparently her father William Nightingale owned the land.  In 1938 there were 1,261 working underground with a further 283 on the surface.  By 1983 the seams had been worked and the pit closed.

In more recent times the colliery has been developed by the Pleasley Pit Trust into a leisure reserve with a large nature reserve and some of the original buildings being restored and opened to the public.  I am fascinated by industrial archaeology and would find this a far more interesting place to visit than an old stately home, however, there is no time today, but it is going on my list of places to visit in the future.

I leave the disused railway line at a crossing of paths and continue on a route heading south to reach Newbound Lane.  I turn right and follow this lane back to the Hardwick Park and then follow Lady Spencer’s Walk back to the car park.  According to the National Trust website Lady Spencer was the mother of Georgina Cavendish (wife of the 5thDuke of Devonshire). She created this walk with her granddaughter whilst staying at Hardwick in the late 1700s.    Now it is used as an adventure trail for visitors. 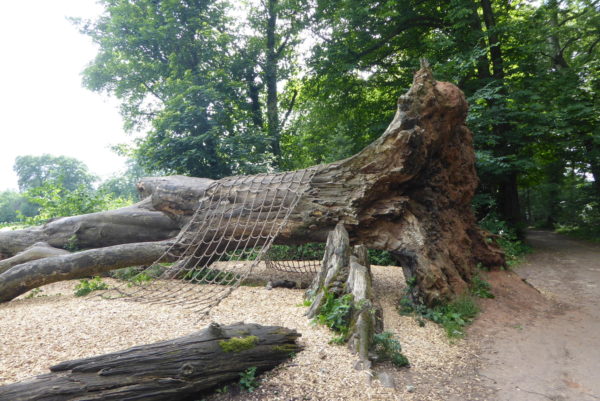 Back at the car I wait in the sunshine for Lynnie to return, I have covered eleven miles and seen a lot of interesting industrial history.  The scenery has not been special but it has been a fascinating walk. 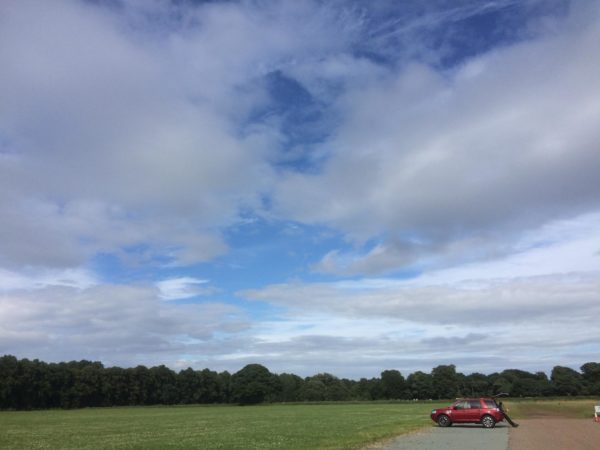 Now its time to head back to Tax Farm CL and pack up, we are on the road again tomorrow.  This time we are heading home, we have been away for almost six weeks so it will be good to catch up with friends.  Back at Tax Farm there is another chance to enjoy a stunning sunset. 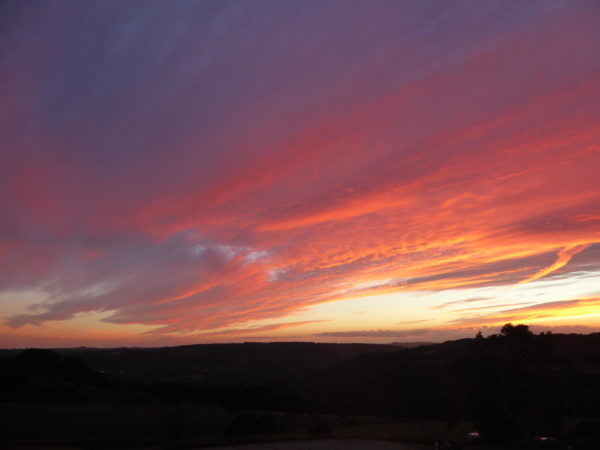