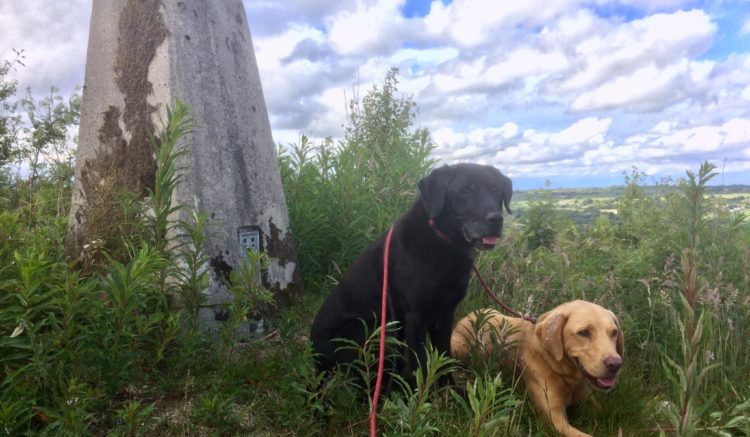 Yesterday we had a quiet day, we had planned a walk but I was not feeling at my best so decided after half an hour to turn around and head back to the caravan.  Undeterred we are going to try and do our planned walk today. Once again we start from Tax Farm CL by heading up the steep drive.

At the road we turn left and walk besides the road for a few hundred yards and then follow a path on the right into the woods.  This is open access land and there are several route options.  We turn right to follow a path through the trees. 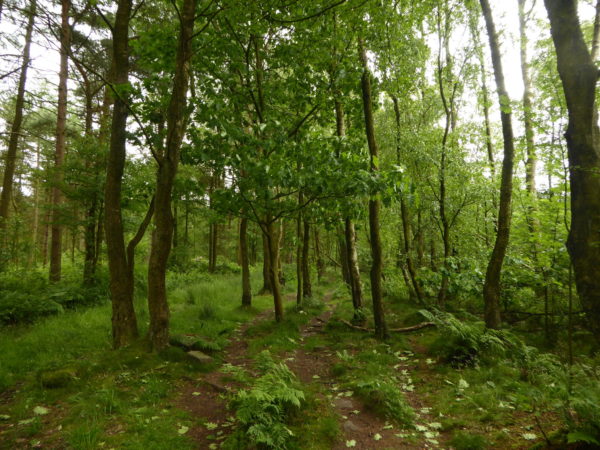 On reaching a forestry track we turn right and follow it through the woodland.  The track turns to the right and then to the left a few hundred yards later we briefly divert so Lynnie can “bag” the trig point I bagged a couple of days ago. 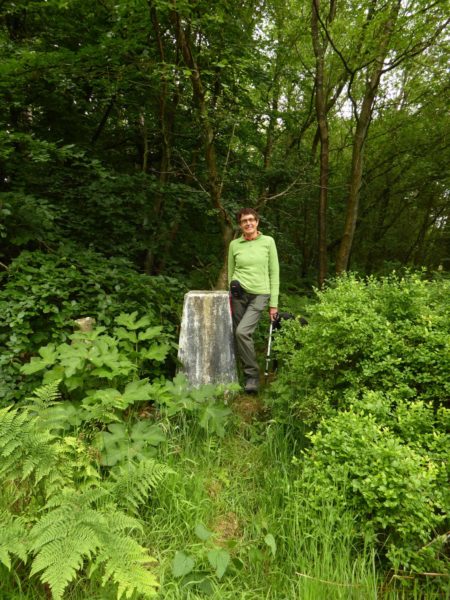 Lynnie is not as enthusiastic as me about her trig bagging, however, she does keep a record and this is number forty-six for her.  From the trig point we head back to the forestry track turning right to follow the track for a couple of hundred yards before turning right on a well worn path besides a wall.  As the wall ends we follow a path downhill through woodland to join a track that soon leads to the outskirts of Matlock.  From here there are a number of options to the town centre, we follow our instinct downhill along a network of roads. 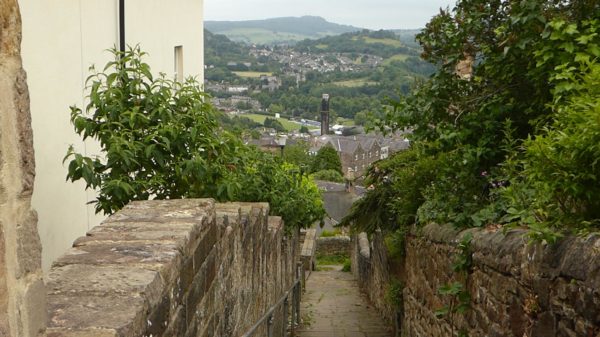 On arriving at Hall Leys Park we wander across to some seats by the bandstand to have our lunch.  When we were here a couple of years ago there was a band playing, however today the bandstand is an ideal play area for a group of young children. 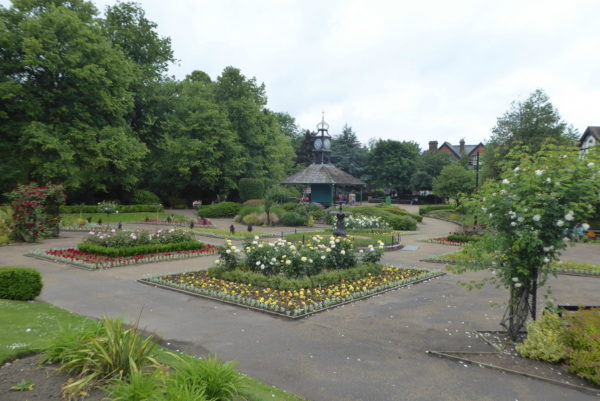 Our walk continues through the park crossing a stream and then following a path alongside the riverbank. We stop to read an information board about the old lead mining industry in this area, it warns of the number of mine shafts that remain in the woods so it is advisable to keep to the path.  On reaching a finger post for the war memorial we leave the riverside path and head sharply uphill.  The memorial, known as the Pic Tor Memorial is a grand affair and commemorates locals lost in World War I and subsequent conflicts. 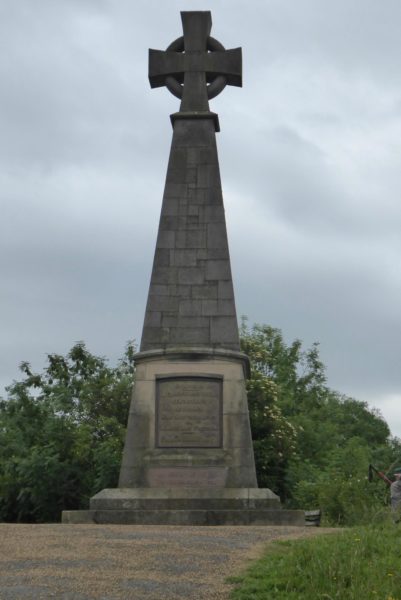 Occupying a prominent spot above the town the memorial commands a stunning view. 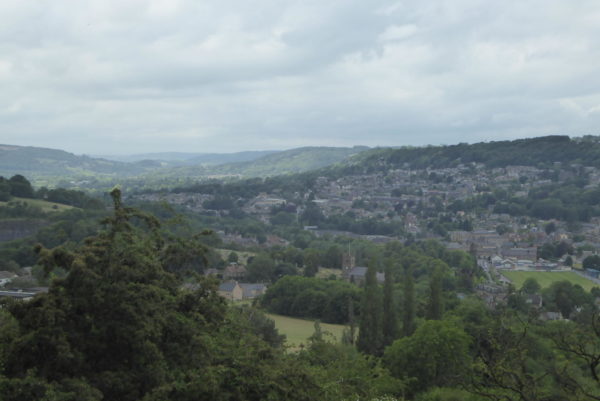 From the memorial we follow a path down to the churchyard of St Giles Church emerging onto Church Road, opposite the Duke William pub, here we turn right along the road and then take a footpath on the left running besides St Giles Primary School.  The path soon emerges onto a stone laid path that gradually heads uphill. 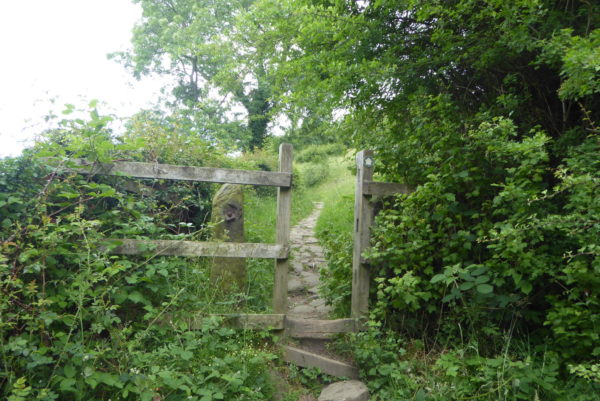 Following the stone path is easy, but it becomes increasingly steep and on such a warm afternoon we are glad to stop and admire the view before continuing on to reach Riber Castle. 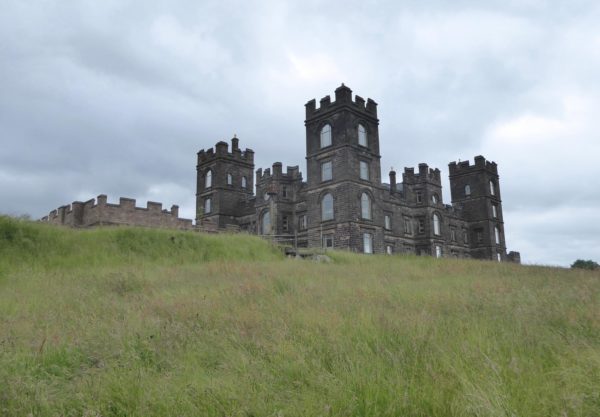 This castle has a prominent position above the town and is known locally as Smedley Folly.  Built in 1862 for the mill owner John Smedley, the stone for the building was apparently pulled up the 660 feet hill by a series of pulleys.  Reportedly it became known as Smedley’s Folly due to the difficulty he had in getting water to his grand home.  Smedley died in 1874, but his wife continued to live there until her death when it became a boy’s school.

The school closed in 1930 and for a while was taken over by the MOD as a storage depot.  In the 1960’s it became a zoological park but closed in 2000.  Apparently there were a number of concerns about animal welfare and activists are said to have released several lynx.  I have read that the site was being converted into flats in 2014, however, it still looks to be work in progress and unoccupied.  It is a fine building so hopefully one day it will be used again rather than fall into total disrepair.

We follow the footpath past Riber Castle and then wander down the lane to the hamlet of Riber where we pick up a footpath to Riber Hall Farm.  After passing the farm we take a footpath on the left leading across five fields of pasture to reach Hilltop Farm, which looks to be in the process of a major renovation.  Turning left we follow a footpath across fields descending to the A615 Alfreton Road.

Crossing the busy road we turn right and walk along the pavement for a couple of hundred yards before turning left down Lumsdale Lane.  We pass one of the many mills that once operated in this valley by harnessing the power of the Bentley Brook.  It was in this valley that Richard Arkwright introduced the “spinning jenny “ which played a key role in the industrial revolution.

We follow the road besides Bentley Brook passing more disused mills along the way.  We take a footpath on the right; this well-worn, walled path would have been the route that mill workers used to go to and from their workplace.  We wander along in the sunshine enjoying the countryside; I wonder at the thoughts of those mill workers as they headed to their toil. 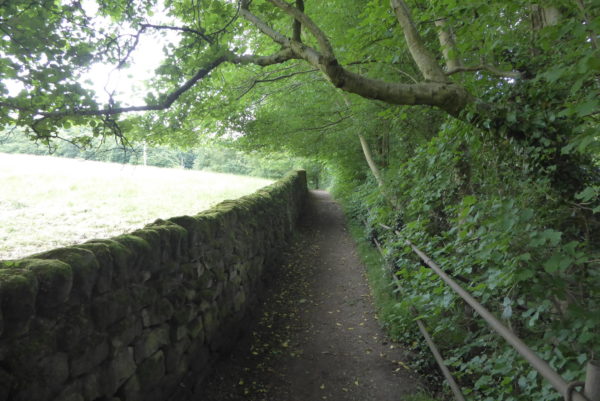 At a junction of paths we turn left and walk between millponds to reach a minor road on the edge of the village of Tansley.  Here we turn left and then left again at the next junction to head uphill towards Oakedge Farm.  The road turns sharply right and we stop briefly to look at some young llamas in a field. 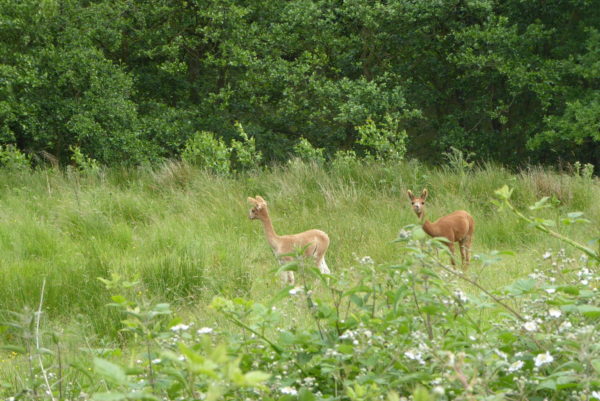 Continuing along the road we start heading steeply uphill, after the climb the road is flat and straight until it turns sharply right, we ignore the footpath sign to our left, keeping on the road, Foxholes Lane.  About a mile on we turn left along Lant Lane to reach the busy A632 where we carefully cross to pick up Wirestone Lane.  This lane is busier but has wide verges so we can avoid oncoming traffic.  On reaching woodland we continue besides the road before turning right at a gateway to walk the short distance to see the Wirestone trig point.  My sixty-seventh trig bagged. 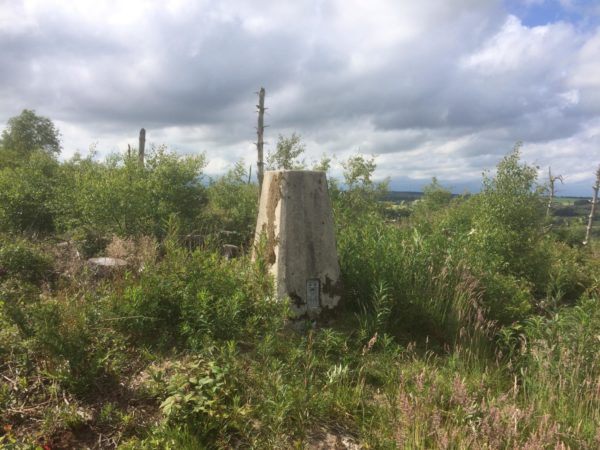 Lynnie is not overly impressed, she has been wondering why we have spent so much time walking on roads today and now realises we have made a significant detour to bag a trig.  In an effort to placate her I suggest we try and get to the nearby Matlock Farm Park in time to get an ice cream.  So we return to Wirestone Lane and turn right and walk rapidly to Jaggers Lane where we turn left. 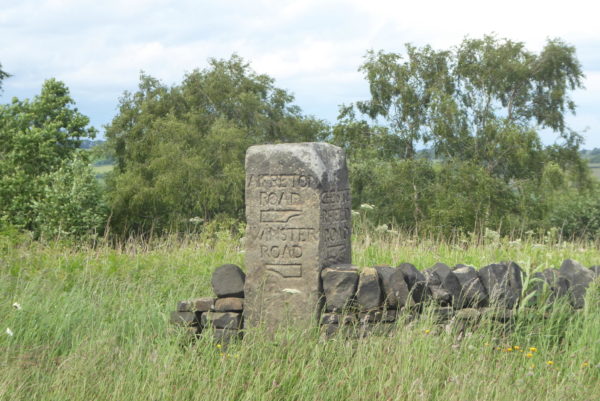 A few hundred yards along Jaggers Lane we reach the entrance to the Farm Park, but unfortunately it has already closed, the speedy walking but ultimately disappointing outcome hasn’t improved my standing with Lynnie.  We continue along the lane to the edge of the woodland on Farley Moor.  There is an obvious route that we follow through the trees. 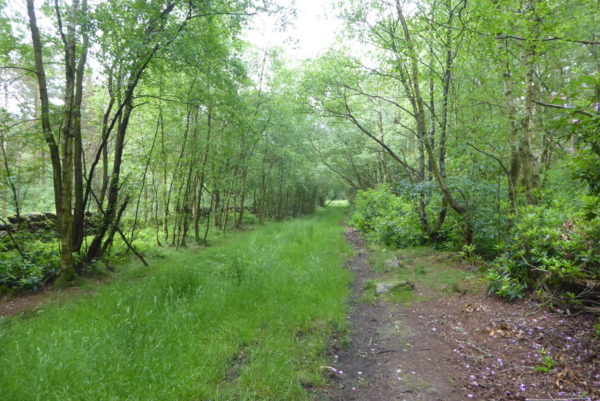 There are numerous options of paths but we head in the general direction of Tax Farm.  Our walk has covered just over twelve miles, a few too many along roads, albeit with little traffic.  As I sit down with the map to plan tomorrow’s walk I look for a suitable route somewhere on the hills.

To view this 12 Mile Walk on OS Maps Click Here