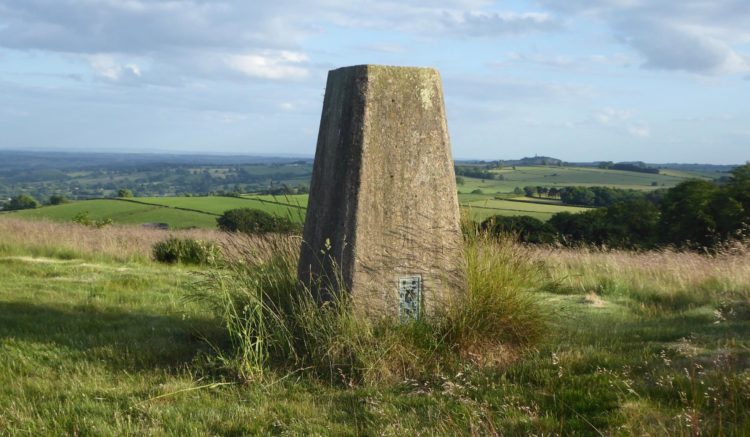 The weather last night was rough, no rain, but the wind associated with storm Hector was particularly strong and as a consequence I had a very disturbed night frequently checking that the awning was secure.  A few years ago we moved to using an air awning and it has proved a good decision, in high winds it is very flexible with no risk of a stray pole damaging the caravan.

As a result of our disturbed night we are in no hurry to get out, so leave it until mid afternoon to set off and make the short drive to the car park at the south end of Ogston Reservoir near the village of Brackenfield.  On the way we pass the car park besides the reservoir close to the village of Woolley, the sign on the entrance warns that this car park closes at 4.30pm.  How bizarre to close a car park at that time of day in the summer!

Checking the sign on this gate, it states this car park closes “Winter”; I plan to go for a good walk, but certainly hope to be back before the gates are locked!  Leaving the car park we turn left and join the pavement on the far side of the road.  The general public are barred from accessing the reservoir so we make do with looking over the wall.  It looks a beautiful spot. 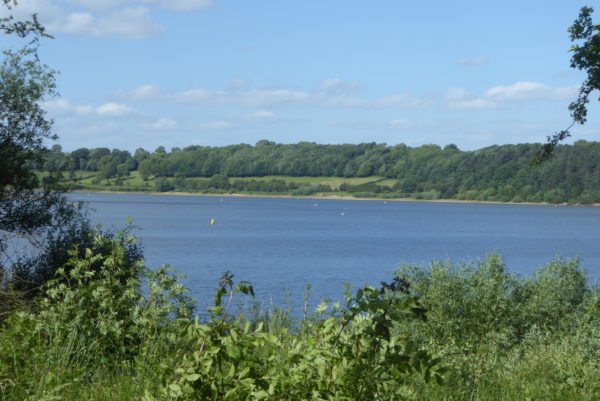 Further along through a gap in the trees we see fish jumping out of the water to catch flies and then spot at least thirteen Herons stood on the banks.  We frequently see Herons on our walks, but have never seen this number in one place. 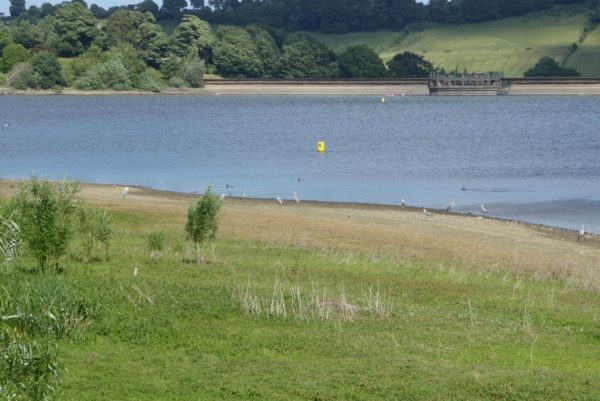 Ogston reservoir was created in 1958 when the valley was flooded; this saw most of the village of Woolley submerged. Apparently the villagers were relocated to new housing at a nearby hamlet Badger Lane, which in time has become known as Woolley Moor.

At a broken footpath sign we leave the pavement and turn left through a gate to walk along the edge of an arable field.  We encounter varying approaches by landowners to footpaths crossing their land.  Some take the view that it is better to have routes well marked and clear so there is no excuse for walkers to stray from the path. Whilst at the other extreme some do as much as they can to deter walkers, such as removing path signs, wrapping gates with barbed wire or allowing paths to become over grown.

We walk with care around the edge of this field trying not to damage crops and then reach a section where the path is overgrown with brambles and nettles, others have tried to beat a way through here and we follow their example to reach a small gap besides a gate. The gate is wrapped in barbed wire so we are careful where we put our hands.  Another short section of brambles and nettles and, stung and scratched, we reach a track where the grass is short. 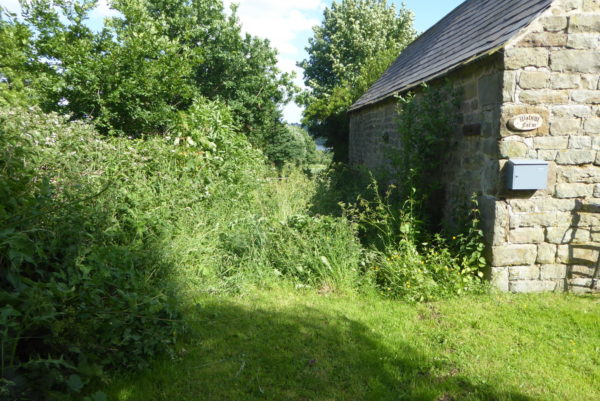 We follow the uphill track to another gate wrapped in barbed wire, I check the map and I’m certain we are in the right place but we cannot find a footpath sign, and then spot it hidden behind a bush.  Through this gate we turn right, walking a short distance down the edge of another arable field to another gate with a stile besides.

There is no prize for guessing that this gate is also wrapped in barbed wire, once again we  cross the stile with extreme caution. Welcome to the countryside!

We are now on a track and turn left putting our walking poles to good use to beat our way through nettles and brambles along the overgrown route.  Whilst away I have been receiving emails from the footpath group in our home village calling for volunteers to form working parties to keep routes accessible.  Such a group would be very useful here. 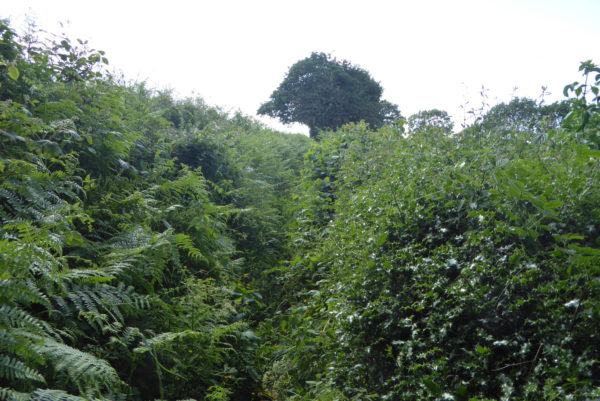 Through a gate the path runs along a track besides an arable field, in places it is impassable and we consequently have to walk along the edge of the field, again desperately trying not to damage crops.  Reaching a gate we go through to a road, we turn left and walk a short distance to a minor road where we turn right towards Chapel Farm.

Walking along I am still fuming about the lack of respect some landowners show to walkers.  In the good old days when we had well funded Local Authority public services each Council would have someone responsible for ensuring that paths were maintained.  Obviously due to the drastic cuts engendered by the Government in the name of austerity such roles are underfunded or axed, faced with a choice of maintaining footpaths or providing support to vulnerable people there is little option.  However, it is short sighted.  The news is constantly reporting the health and well-being benefits of getting out in the countryside.  Surely ensuring routes are maintained must be a part of this strategy.

At a junction of lanes we turn left walking uphill to soon pass the Primitive Methodist Chapel, originally built in 1824 it was enlarged in 1870. 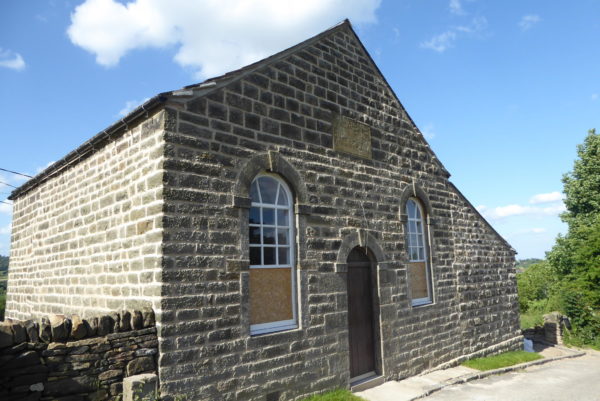 Soon after the chapel we take the right fork in the road and then almost immediately take a track on our left which heads a short distance down to another minor road, here we turn left and walk along the lane.  At a junction close to Ashover Hay Farm we cross the road to join a footpath opposite.

This path goes through a gate and along a farm track, after another gate the path goes to the left of a barn and then fords a stream before going up hill to reach a field of pasture full of wild orchids. 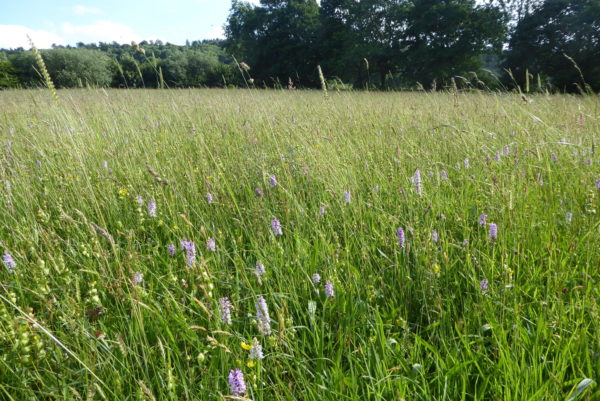 The path goes through a small gap in the wall to enter another wild flower meadow.  There are two options here, either stay on the footpath or follow a permissive path.  We go for the footpath option following the way markers through a gap in another wall and then heading uphill with a wall on our left.  Just short of a farmhouse we cross a wall to go through another gap in a wall that leads into a small enclosure housing a family of Tamworth pigs, before we can put a foot over the piglets have run to the entrance. 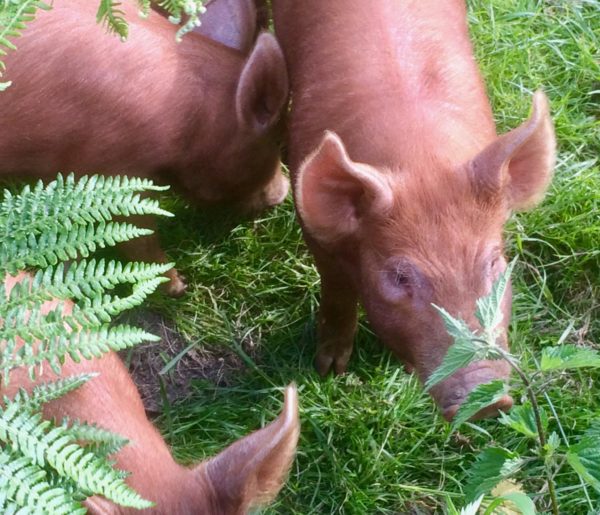 In my youth I used to work on a pig farm and would regularly feed 300 pigs on a Saturday and Sunday morning. I like pigs, but have witnessed how a protective sow can turn on someone and also how aggressive a boar can be. I enter first and the boar is quick to show his displeasure at my presence, I am not sure if it is me or our dogs still peering through the gap that he dislikes. The sow joins him and between them they present a formidable barrier.  I have learnt to be cautious in such situations, so after a short debate we decide it is too risky to take the dogs through and it would be safer to retrace our steps and pick up the permissive path.

I never like turning around on a walk, but sometimes it is the sensible option.  Back at the sign for the permissive path we follow the well-marked route across fields of pasture, soon encountering a field of cattle that luckily show no interest in us.

We turn right up the lane and then take a footpath that climbs through the edge of woods to reach Coldharbour Lane.  We turn right and walk along it to the car park at the viewpoint.  This is another closed car park; apparently it only opens at weekends. Obviously no one would want to visit this place during the week! We sit on a memorial bench and admire the view. 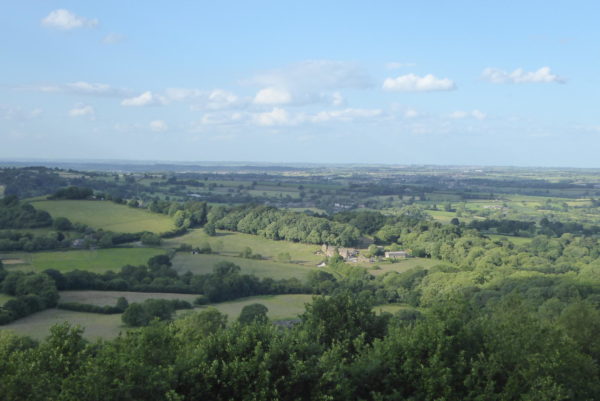 Continuing along Coldharbour Lane we soon turn left down a footpath besides a farm, the path leads around the boundary of the farm before crossing a field full of cows and calves.  As I enter the field the cows look on watchfully, but as soon as the dogs enter they become agitated and move on mass towards us. We only need to go a short distance, however it  looks increasingly hazardous, so for the second time on this walk we turn and retrace our steps.

Back on Coldharbour Lane we turn right, back down to Highoredish Farm and then take a footpath on the right leading through the farmyard and over a stile into a field of sheep.  We follow the path across a brook and then up a hill to cross a wall stile to turn right across a field onto open access land. The path leads through gorse and then opens out as we head up to the Highoredish ordnance survey trig point. This is the 66thtrig point I have bagged. 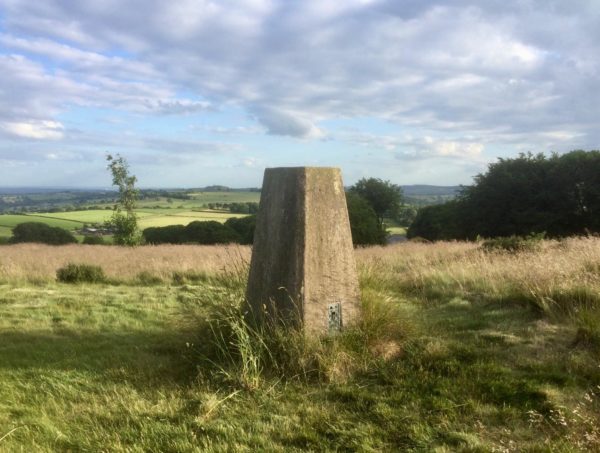 We now return to Highoredish Farm and walk towards Mathersgrave and then on to Brackenfield where we stop to look at the old school building, now the parish hall.  The school was founded in 1845 and closed in the late 1940’s. 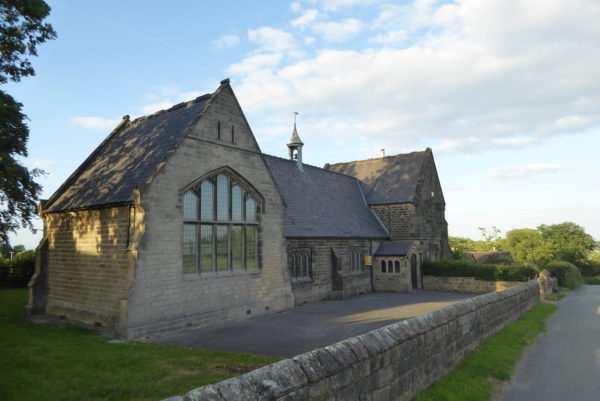 Through the village we reach the church of Holy Trinity built in 1857 and turn left to head back towards the car park. 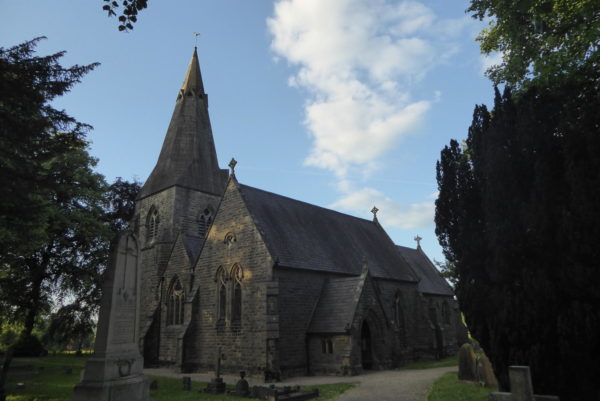 Our walk has covered seven miles, it has been an eventful afternoon, with aborted routes, almost impassable paths, closed car parks and a trig point.  It is now time to head back to Tax Farm CL and settle down with a beer and watch another amazing sunset. 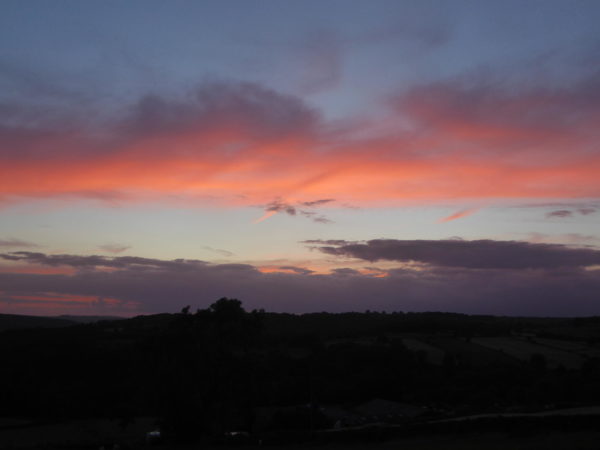 To view our 7 mile walk on OS Maps Click Here