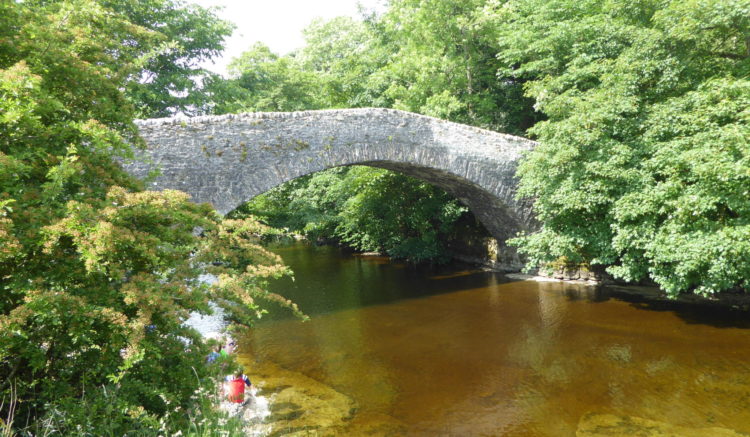 Earlier in the week we popped along to The Talbot Arms in Settle for their quiz night.  Though unsuccessful in winning a prize we had a fun evening.  Afterwards we got into conversation with some locals who told us about a couple of local landmarks we have never visited or heard of.  This is no mean feat because we have been coming to Settle for many years and I thought we had walked most of the local footpaths.

Armed with the local knowledge imparted from our chat we set off today to explore and locate the two spots of historic interest. Leaving Brigholme CL we turn left along Station Road and then at the crossroads turn right to follow Raines Road through Giggleswick.  At the end of the road we turn left and then quickly take a right to head along Mill Hill Lane passing Giggleswick School along the way. 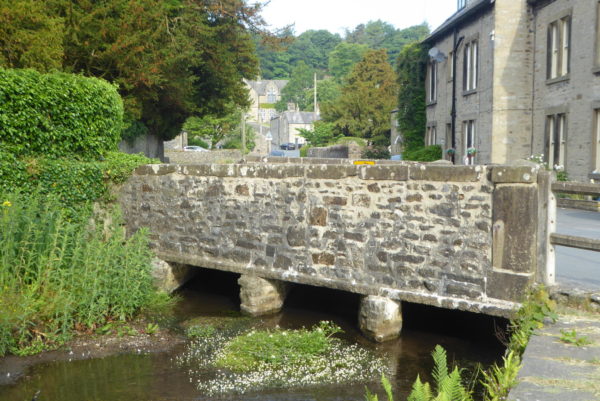 We soon pass some of the immaculately manicured sports fields of this fee-paying school and then continue on to pass the edge of Settle and Giggleswick Golf Course.  This nine hole golf course first opened in 1895 and although not particularly long looks to be a good test of golf. 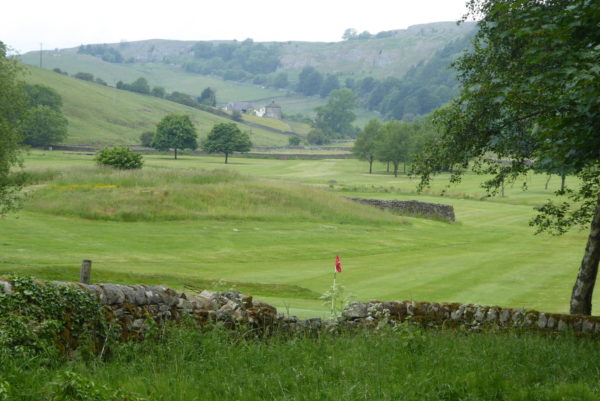 On reaching the B6480 we cross and take a footpath almost opposite to the right of the quarry entrance.  The path heads steadily uphill besides the boundary fence of the disused quarry. 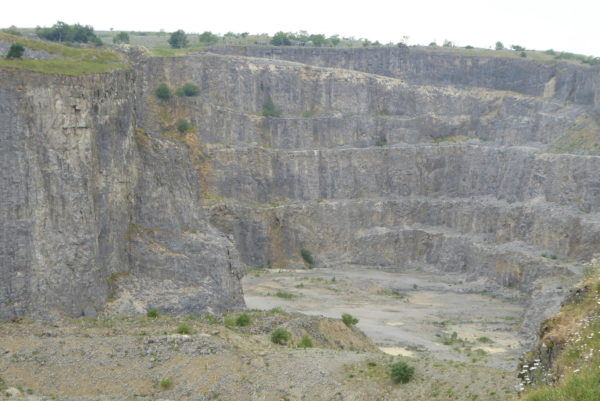 The path is well defined as it sweeps around the top of the quarry. At the top there are a number of routes across the access land, but we head around the quarry to reach a large cairn known as Schoolboy Tower.  This tower is very prominent on the edge of Giggleswick Scar; tradition has it that students of Giggleswick School, on completing their matriculation, trekked up here to place a rock on the tower, thereby marking the end of their schooldays. 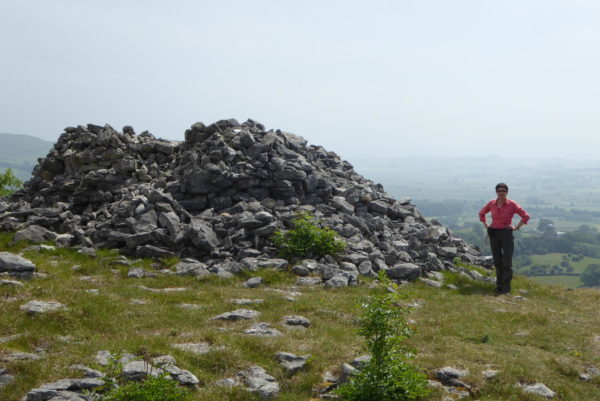 Having found the first of the locations mentioned the other evening we set off to find the second, Dead Man’s cave, which lies across the access land towards Feizor.  We retrace our steps to the edge of the quarry and then pick up a clear path heading in a northwesterly direction.  After a while we reach a wall with no clear sign of a stile and we realise that the path we have been following is just a circular route around these fields.  Undeterred we follow the route as it heads back towards Stackhouse, the opposite direction to the one we want, but we are hopeful of picking up a footpath going towards Feizor.

Unfortunately, I never seem to get calls like this correct, when I spot what looks like a short cut we end up walking miles further, or when I decide to ignore a potential short-cut we  discover later it would have been a good choice.  However, we are in no rush and it is not a hardship to wander around this cracking spot. 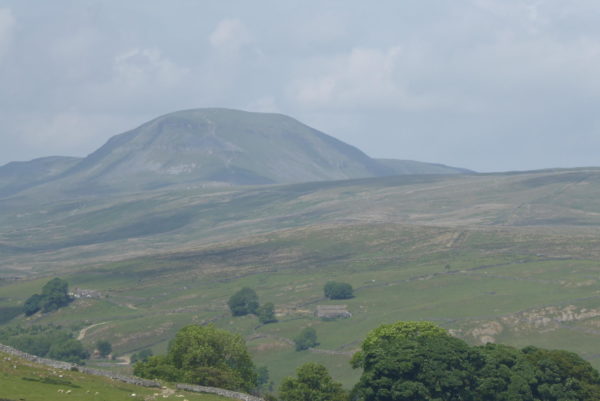 After descending steeply on a path leading off the scar we soon reach a footpath and turn left through a gate to enter a field, the path leads to a ladder stile which we cross and then join the way-marked A Pennine Journey footpath.  This route is now clear and easy to follow as it goes through gates and crosses fields of pasture.

Nearing Dead Man’s cave we encounter a field of cattle, I am always wary of cattle when we are with the dogs, this herd are blocking our path and from a distance start to show an interest in us.  So casually we turn around and make a dignified exit from their field.

Safely on the other side of the gate we assess our options and decide that rather than retrace our steps we will take a footpath to Little Stainforth.  This is a signed route along a well-trodden path. 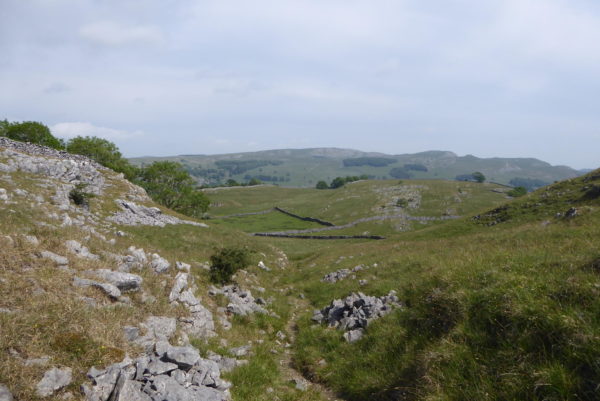 Leaving the access land we go over a couple of ladder stiles at either end of a short walled track and then enter pasture.  The route is well defined across the fields and as we approach Little Stainforth we join the Dales High Way footpath.  This takes us through Little Stainforth, passing the caravan site and on downhill to reach Stainforth Force.

Last year when we were here the river was in full torrent and we were concerned for the safety of a group of youngsters messing about in the river.  Today it is a tranquil spot and families play happily in the river. 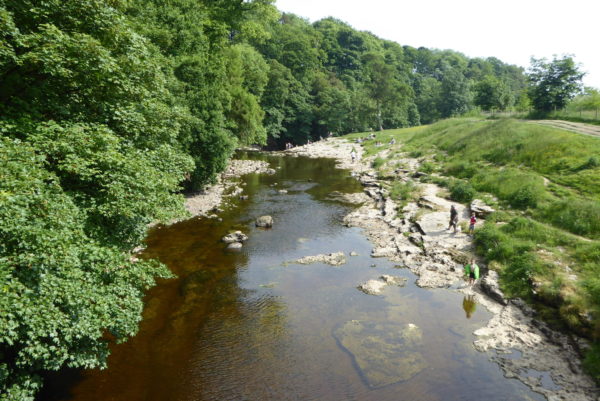 We cross the bridge over the River Ribble and follow the route into Stainforth.  It is very unusual for us to stop for a drink whilst walking, but the sun is shining and we fancy a break so decide to stop at the Craven Heifer for a pint.  I pop in for a pint for me and an ice cream for Lynnie.  I try to engage the barmaid in conversation, but she is more interested in looking at her phone. Sipping my beer, I comment that the pint of Wainwright’s might not be at its best.  I am advised that others are drinking it without complaint so it is obviously not to my taste!

Many years ago I was in the New Forest with a couple of cricketing mates.  Whilst I popped to the gents they decided to encourage a local pony to drink my beer. I returned to find said animal with its nose in my ale. I believe even that thirsty pony would have shied away from this pint!

Both feeling disappointed (Lynnie’s ice cream was very small, very ordinary and rather expensive) we continue our walk through the village to pick up the Pennine Bridleway as it heads steeply uphill on a walled track and then crosses fields to Upper Winskill.  We stay on this route past Winskill Stones to reach a minor road. Here we turn right and walk downhill, still on the Pennine Bridleway.  We then follow the way-marked route through a gate and across pasture to pass below Blua Crags. 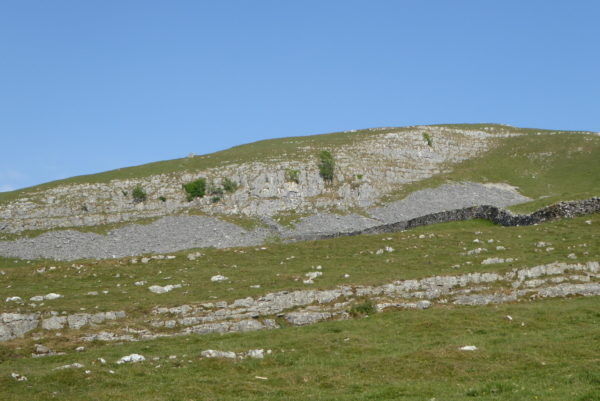 This is a path we have walked frequently and we soon go through Settle and then return to the caravan at Brigholme Farm.  It has been an odd afternoon, nothing seemed to go quite as planned, but we have had a cracking time (apart from the rough pint of ale) covering just over ten miles of stunning countryside.

To view this 10 Mile Walk on OS Maps Click Heree