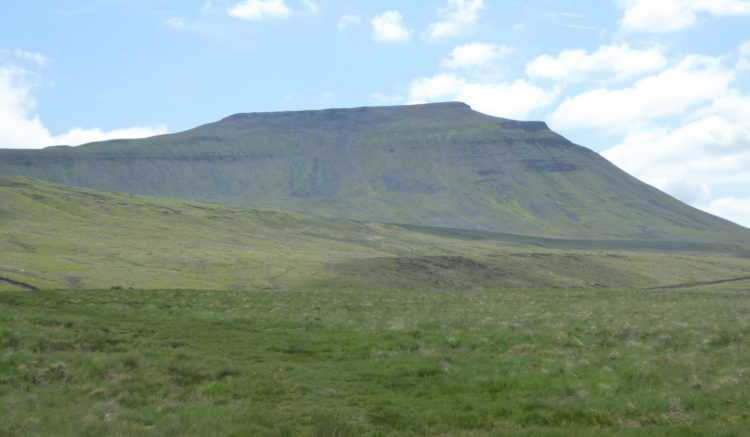 In just over four weeks time I reach sixty, I have no desire for any celebrations but there is one thing I want to do to mark the passing of another decade of my life and that is to undertake the Yorkshire Three Peaks Challenge for a third time.

I have been walking in the Yorkshire Dales for over thirty years.  In that time I have been up Ingleborough, Whernside and Pen-y-ghent frequently, but it was not until 2014 that I first completed the Three Peaks Challenge and covered the 24.5 miles in nine hours and forty minutes.  I was well pleased with that time, especially as I was not entirely certain I would have the stamina to get round.

My second go at the Three Peaks was in 2016; on that occasion I was walking with my daughter Lolly and her now future husband Toby.  These two are super fit, although they don’t do much walking.  We went round in eight hours and twenty-five minutes, which I found tough going.  I have been training for this walk for months and aim to get inside nine hours today.

I don’t propose to describe the route of this walk, if you are going to undertake the challenge you will have done your research and the route is way-marked, well-trodden and easy to follow.

My starting point is Horton in Ribblesdale, where I decide to clock into the cafe to register my start time.  It is more for wanting a third certificate rather than in anticipation of a notable time.  From the shop there is a short flat walk through the village to the church before passing the school to enter fields and then the challenging steep ascent of Pen-y-Ghent.  This is a stiff climb to start the day; the legs don’t get much chance to warm up. 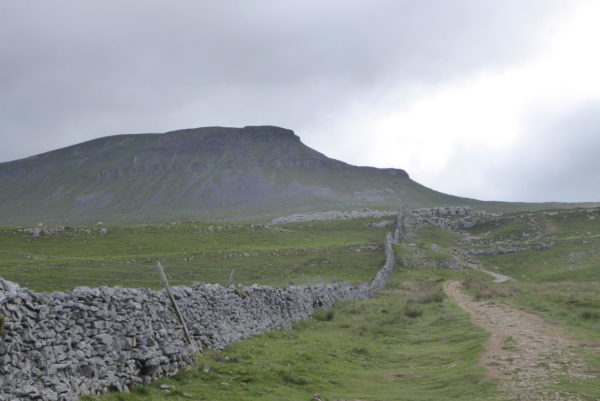 With no company to chat to I can preserve my breath for the task in hand.  I pass one couple who appear to stop every ten yards.  I hope they are not intending to tackle all three peaks if they are struggling at this stage, they are in for a long day!

On the way up there is a cool breeze and clear visibility, but as I make the final clamber to the summit the cloud rolls in and there is a chill in the air.  It is a stark reminder how quickly the weather conditions can change when walking in these peaks. Five days ago I was on Ingleborough and the visibility was no more than ten yards.  So be prepared! 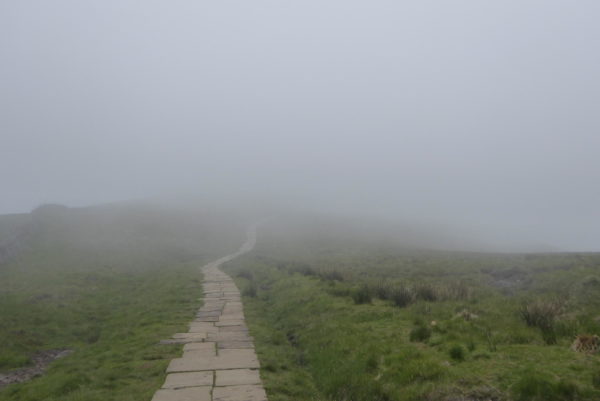 I reach the trig point on Pen-y-ghent in exactly one hour, a few minutes behind the time set with Lolly and Toby, but still good going. 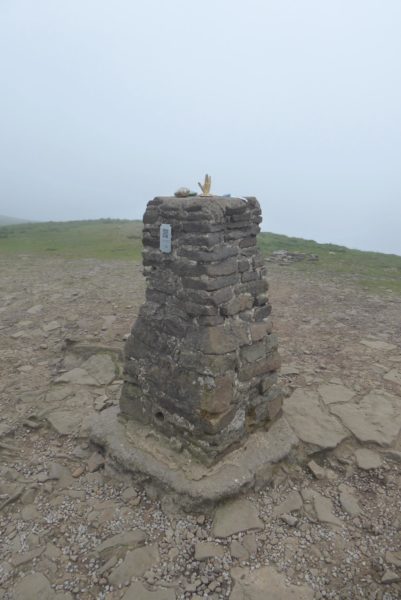 The route from the summit of Pen-y-ghent has had paths laid in recent times, I am not sure it makes it an easier descent but it does improve the landscape.  The previous path had spread and there was some serious erosion leaving a blemish on the landscape. 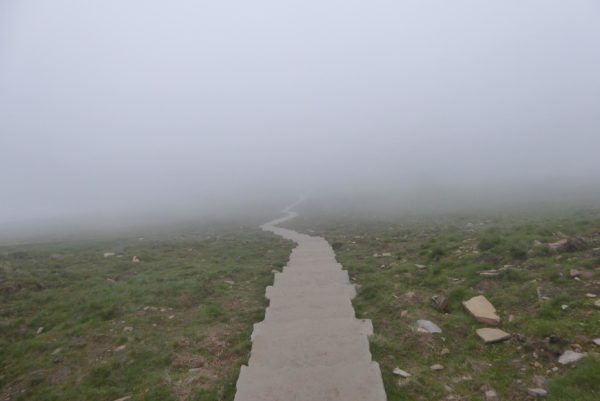 I am feeling surprisingly good after the steep climb.  From experience I know that if I am going to record a good time the section between Pen-y-ghent and Whernside is the key.  It is a relatively easy section and by stepping up the pace I can gain time here before the steep ascents that are to come. 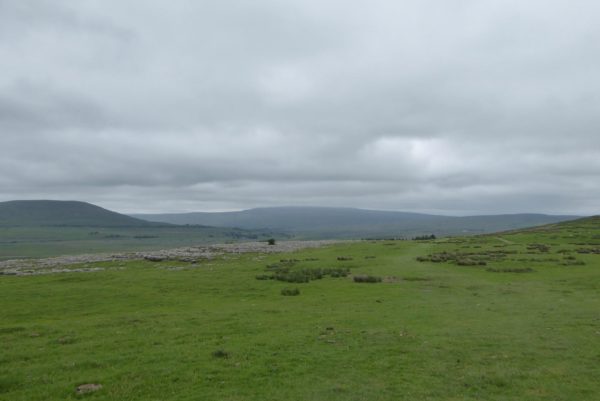 Last week whilst in the George and Dragon in Hudswell, near Richmond, we were chatting to the barman, unbelievably he had just completed the coast-to-coast walk in four days.  That’s an amazing 192 miles in less than 92 hours.  As part of his training he completed the Yorkshire Three Peaks in 6.5 hours carrying his full camping backpack.  He said the key to clocking up a quick time was not stopping and making sure you eat and drink almost continually to avoid the lactic acid building up in the legs.

There is no way I would ever get close to 6.5 hours for this walk, but I have taken on his tips and whilst I walk I sip my drink and eat cheese. Checking my watch I am now walking at over four miles an hour and feeling no ill effects.

At Ribblehead Viaduct I avoid the temptation to stop and admire the view. It is a cracking place, but I have been so many times previously that I just focus on the walking. 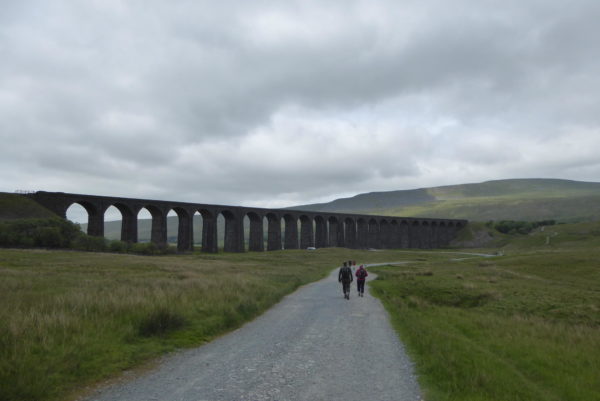 As I start heading up Whernside I am facing into a chilly head wind.  I exchange greetings with a couple of chaps sat beside Winterscales Beck, I say what a cracking day it is and they tell me it is a bit chilly.  To me it is perfect walking conditions. 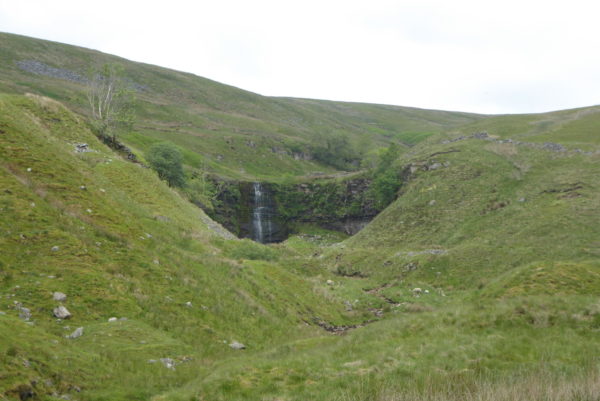 I make good speed up Whernside, no stopping to catch my breath and I try to maintain a steady pace whilst still taking on food and drink.  I am reaping the benefit of all those walks earlier in the year on The Quantock Hills and Exmoor.  My legs still feel really good and in next to no time I am at the top taking a picture of the trig point. 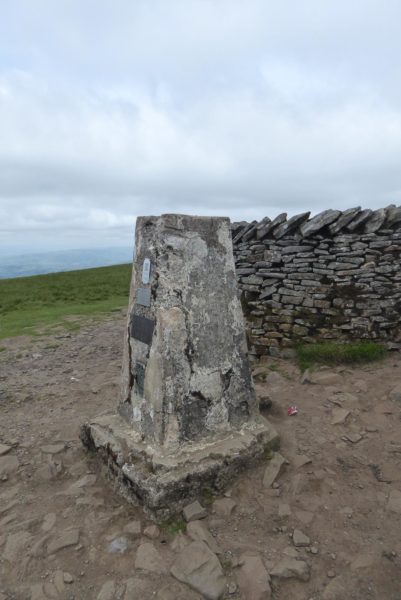 The descent from Whernside is steep and for an old fellow with dodgy knees it is hard going and it is a relief to be on level ground again.  After passing The Hill Inn it is the start of the climb up Ingleborough normally at this stage my legs feel like lead, but today they still feel fresh so I decide to have a go and see if I can get inside eight hours.

As I reach the rocky section up to the summit of Ingleborough I catch up four young women, two of them are really struggling and look like they are about to give up.  I give some words of encouragement telling them that to reach the top from here is only like walking up the stairs at home half a dozen times. On the summit I head across to the trig point to take a picture and make my customary wave to Mum and her close friend Phyl, it is so sad they are no longer with us to share the joy of days like these. 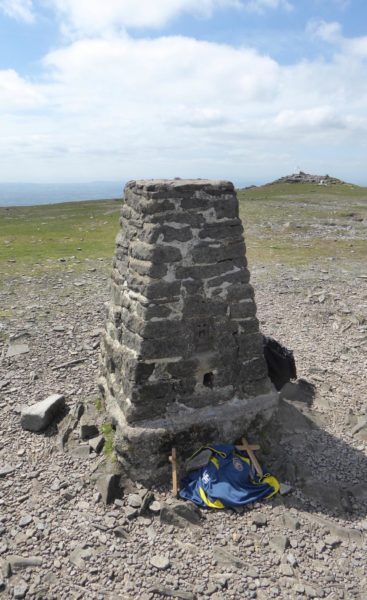 Heading back across the plateau to start my descent I pass the group of young women, they had made it and ask where the trig point is and will it say you have completed the Three Peaks Challenge.  I point them to the trig and advise them that they need to get back to Horton in Ribbledale to complete the walk and it is still a few miles away.

The first time I did this walk I made the mistake of thinking I had done all the hard work when I came off Ingleborough.  This final section, although downhill, is across rough terrain and is challenging if you are struggling with tired legs or blistered feet.  Fortunately my feet and legs are still feeling good so I press on.

I now know that barring disaster I will set a new personal best time, but I also know that I will never be able to do it at this pace again and I am really keen to get inside eight hours.  The path is clear and then as I go through Sulber Nick cattle are moving around at pace. I can see the farmer is moving them towards the gate at the end of the limestone section and worry this will hold me up.  The farmer spots me and kindly holds the cattle back so I can pass.  Through the gate and onto the brow of the hill and I see Horton Church below and know the end is in sight.

Pushing on at pace I enter the village and get back to the cafe, clock in and buy a drink. I have managed to get round in seven hours and forty-four minutes.  For the next ten minutes I am unable to speak and just concentrate on getting my breathing back to some order.

Having got my breath back I chat with a couple of fellows who are the first back from a large group.  They have gone round in just over ten hours and are worried about when the rest of their party will return.

After a refreshing shower back at the Coachman I have just about enough energy to walk into Settle for a well-earned meal and a few pints of Thwaite’s Ale at the Lion.  The chaps I had been talking to at Horton are there with the rest of their group, most of whom made it around.  The group includes the four young women that I had encouraged near the summit of Ingleborough.  I congratulate the one who had been struggling most and she said she was about to give up when she received motivation from a chap near the top of Ingleborough!

Beating my previous personal best and clocking under eight hours gives me a real sense of achievement, but that feeling is doubled by knowing that a few words of encouragement to someone in difficulties has helped them to get around. It is not the time that counts but the doing it that matters!

If you are going to tackle this walk do remember it is called the Three Peaks Challenge for a reason.  It will challenge you physically and mentally.  There will be times when either your body or your head wants to give up, but keep focused and make sure you regularly take on food and drink. Finally make sure you have good boots and socks and if you feel a blister developing treat it before it gets too bad.  Most of all enjoy the day, the feeling at the end is unbelievable!

To view this 24.5 Mile Walk on OS Maps Click Here