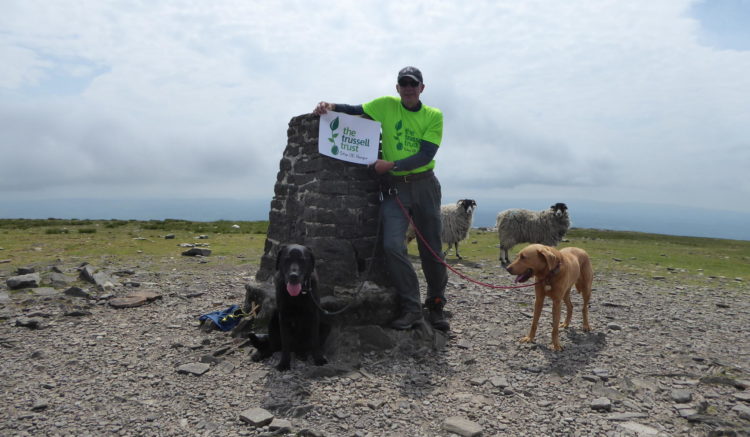 When we were planning this trip Lynnie was very clear that she would not be walking up Ingleborough. Whilst accepting my desire to walk this stunning peak at least once a year, she feels that she has been to the top more than enough times.  So I was very surprised when she suggested we walk to the top from Ingleton this certainly meets with my approval.  We have not previously reached the summit on that route.

Over thirty years ago we took a wander from Ingleton up the track towards Ingleborough, a slightly bizarre decision because our daughter Lolly was in a buggy at the time.  Nowadays child buggies appear to be fitted with all terrain tyres, ours had small tyres that were blocked by every stone. Needless to say we did not get too far! Further than Lynnie thought was reasonable, but nowhere near the end of the track.

A year later we tried again, by that time Lolly was out of a buggy, but most of the way she was on my shoulders with Ben very keen to get to the top.  Unfortunately as we approached the farmhouse at Crina Bottom low cloud descended over the summit and we decided on the sensible approach and turned around.

Today we start from the car park in Ingleton; this is the location of the Community Centre and Library and is also home to the Tourist Information Centre.  The former Ingleton railway station was situated here, an information board explains the history of the Settle to Lowgill line designed to connect the Midland Railway and the London North Eastern Railway route from London to Scotland. 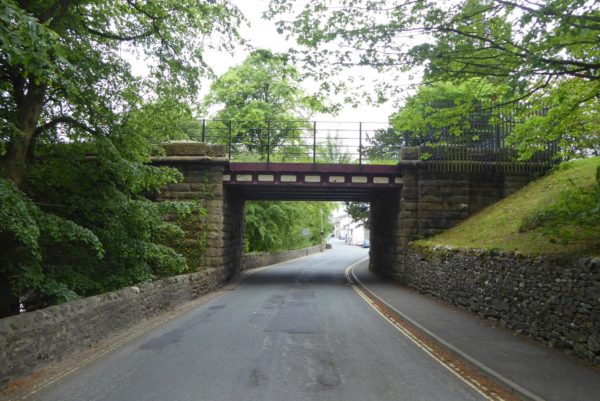 We leave the car park to walk into Ingleton, and stop to look back at the viaduct.  This was built between 1848 and 1860 and is an impressive structure. However, it was fraught with controversy, initially North Western Railway (NWR) was given permission to build the route.  However, they fell into financial difficulty and the Lancaster and Carlisle Railway (L&CR) agreed to build the viaduct and branch line.  By the time the viaduct was completed NWR was owned by Midland Railway and L&CR was owned by rivals London and North Western Railway. The two companies were such rivals that they would not share a station so another was built on the other side of the viaduct.  This sounds okay, but passengers wanting to make a through trip were not able to cross the viaduct, they had to disembark and haul their luggage the one and a half miles.  It was not until 1923, when the two rival lines merged, that the first passengers were able to make the through journey. 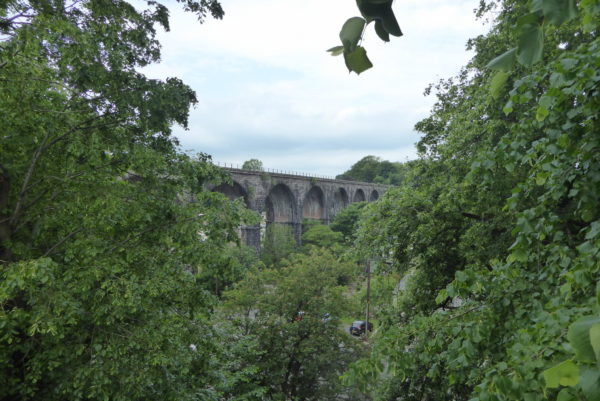 We walk through Ingleton and follow the road towards Hawes for a short distance before forking off to cross Storrs Common,  stopping briefly to look back over Ingleton and the viaduct. 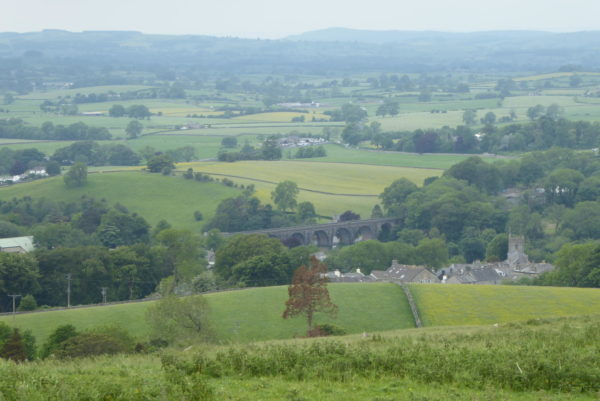 We follow the track uphill to join the wall-lined track, Fell Lane.  It is at this point we realise how foolhardy we were all those years ago to think we could push a buggy up here. 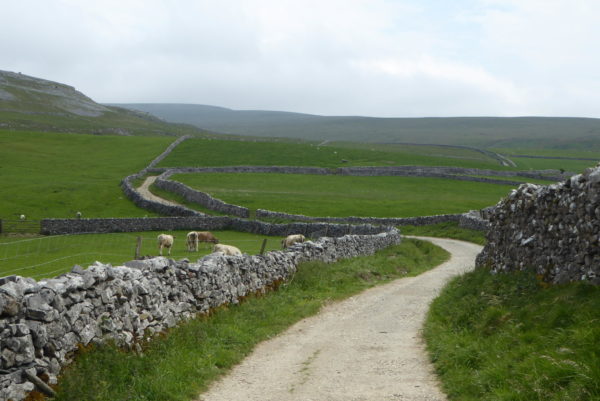 As we walk we reminisce about heading up this path with the children.  Lynnie is of the view that I put them off walking at an early age because we spent too much time clocking up the miles.  At the time we often did walks from a Dales’ walking book and the children would be scanning it feverishly over breakfast looking for the shortest walks! I think it is still too early to judge and hope, as they grow older they will increasingly want to get outdoors.

This is an easy route to follow and pleasant walking on a fine day.  Looking ahead we see that the summit of Ingleborough is shrouded in cloud. Having been up there in very poor visibility a few days ago I am not too bothered, but I know Lynnie is a little apprehensive. 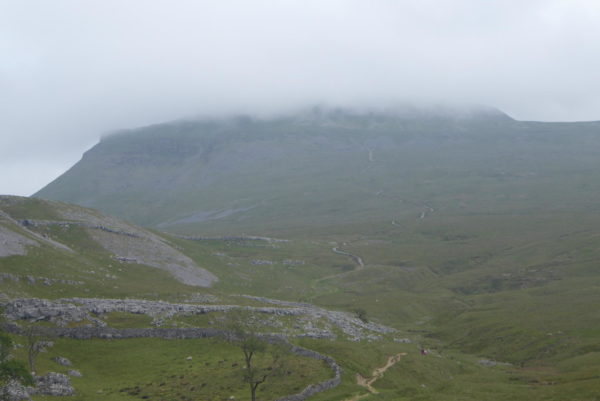 The walled track ends close to the remote farmhouse at Crina Bottom. 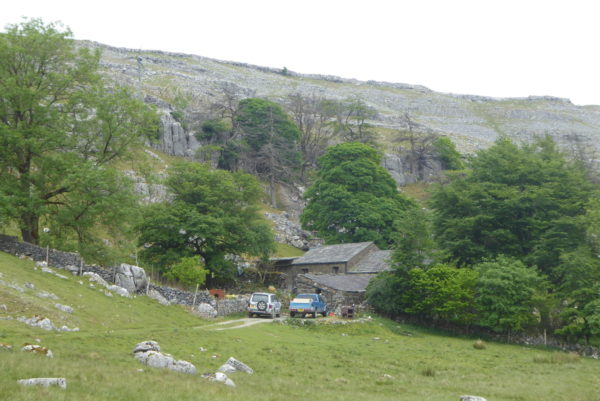 The path is still well defined as we pass the stunning White Scars. 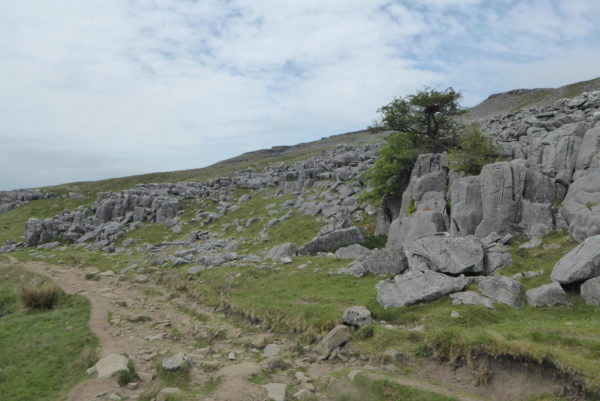 Finding a suitable picnic spot we stop for lunch and admire the view. 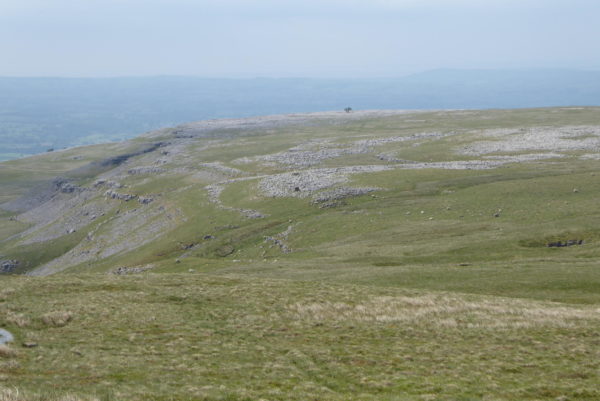 Refreshed we continue up the path, the cloud has now cleared from the summit. 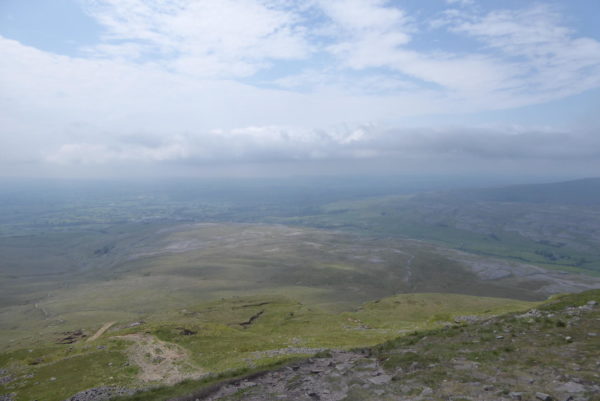 Arriving on the plateau on the top we are close to the remains of Ingleborough Tower, it now looks like a large cairn.  An information board explains it was built in 1830 by a local landowner as a shelter for his grouse shooting parties.  As part of the opening ceremony he laid on an entertainment and refreshment.  However, apparently a group of disgruntled locals over imbibed and in a drunken rage against the owner pulled down the tower. 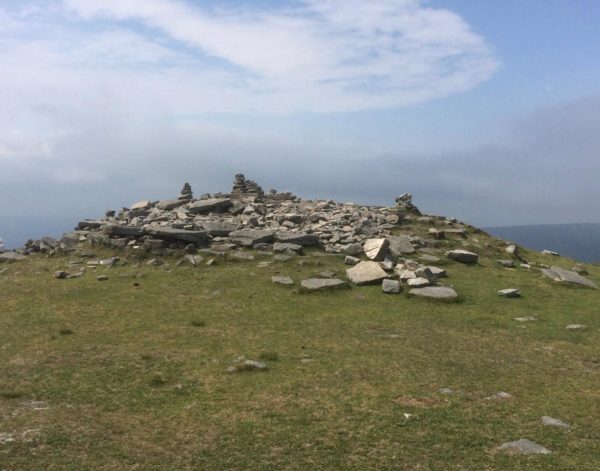 We make the short walk to the trig point for the obligatory photo.  I could fill a whole album with pictures of this trig point. 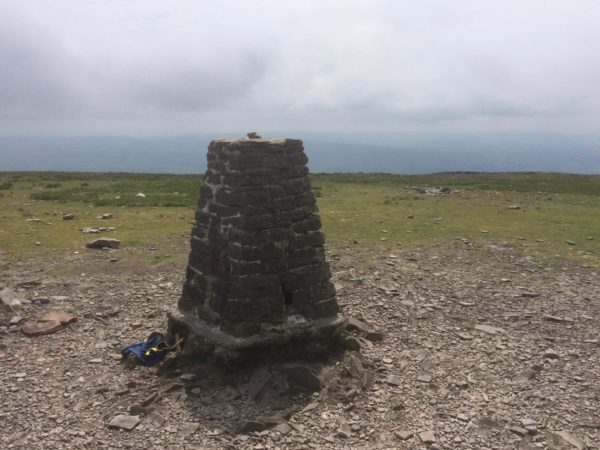 Our route off the summit is the path leading over Little Ingleborough. 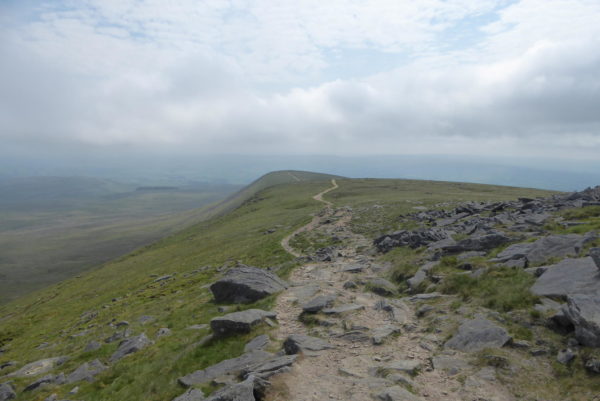 At the cairns on the summit of Little Ingleborough we leave the main track and take a footpath on the right.  This is not so clear but with care can be followed as it descends across Newby Moss. As we approach Newby Cote I take a peek over the wall at the lime kiln. 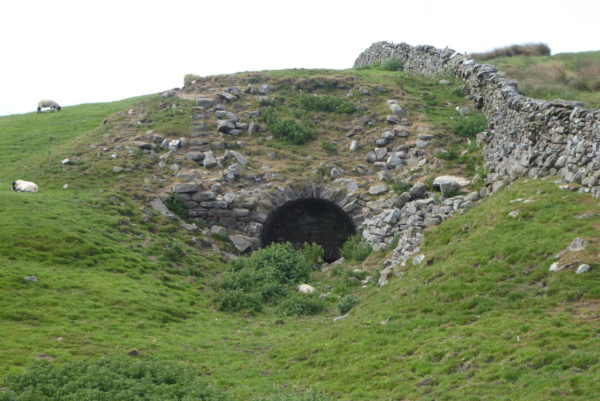 Now following a farm track we reach a particularly high ladder stile besides a gate.  The gate is locked and it is a real challenge getting the dogs over the stile without injuring them, or me!

On reaching the minor road (Old Road) we turn right and head back towards Ingleton.  This is a very quiet road and pleasant walking. 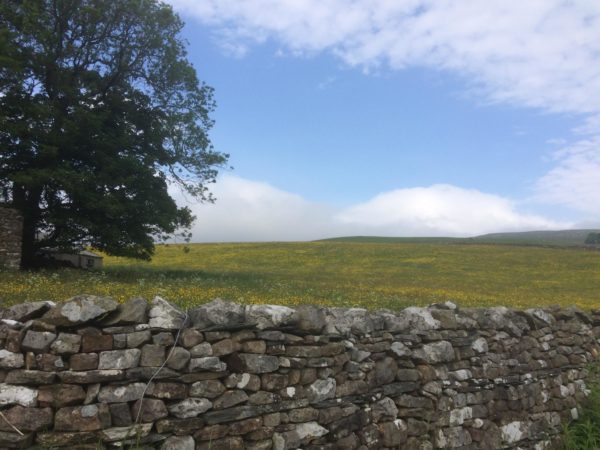 Entering Ingleton we turn left downhill to walk through the village back towards the car park. I have promised Lynnie an ice cream if the café is still open, but unfortunately we are too late. 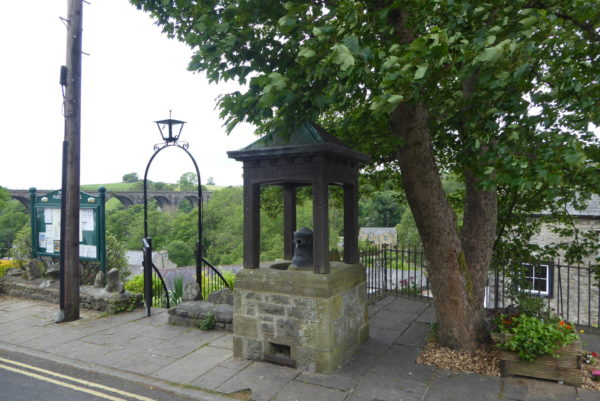 Our walk has covered close to ten miles.  It has been a cracker, partly because thirty years after we first tried we have finally reached the summit on this route and also because it has been a walk full of memories of past happy, family holidays.