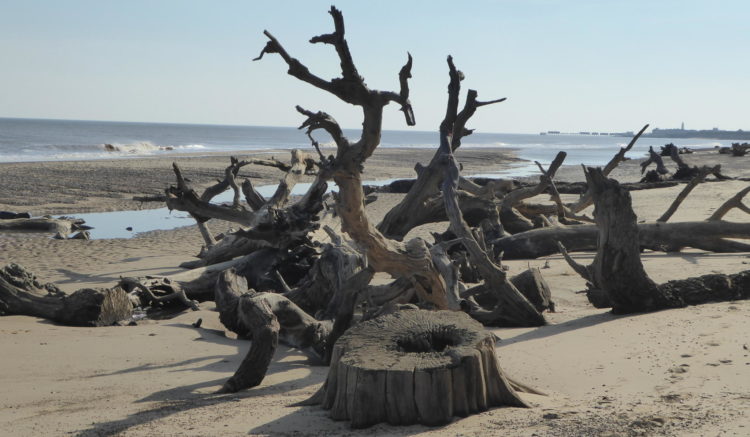 Whilst in Little Downham our caravanning mates Richard & Trudie, who live locally, popped over to see us. One of the places they recommended visiting whilst in Kessingland was Covehithe, so it is today’s destination.

Leaving White House Beach Caravan Club site we walk towards the sea and then turn right along the promenade, continuing along the coast we wander down towards the shore line. We would normally let the dogs run around on a beach like this, however, we have been warned by a couple of dog walkers that a lot of palm oil has washed up along the coastline and it is potentially deadly for dogs. 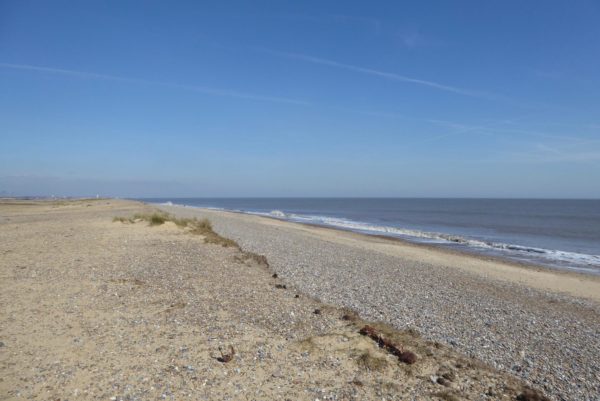 As we approach the pumping station we go slightly inland to cross the Hundred River. This is now little more than a stream but it was once very significant to the economy of Kessingland. A few days ago a local in the Sailors Arms told me how this was once a major shipping route and the parish council website explains that the Vikings and the Romans used the port, which at one time was more significant than nearby Lowestoft. However, during the 14th century the river silted up and the port declined.

Having crossed the river we are now in The Denes, here there is a lagoon and it is still just about possible to imagine where the river might have once been. 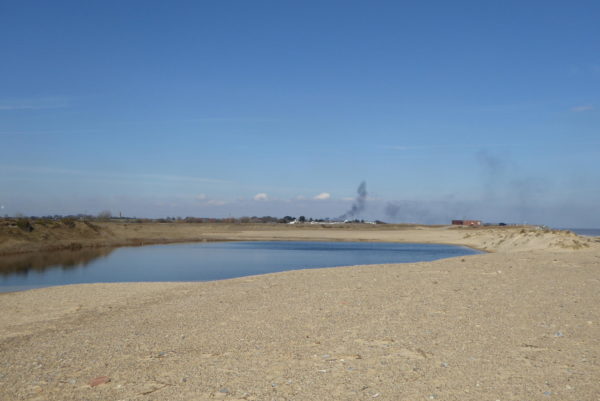 We take a diversion inland. Before setting off I checked the tide times and know with the tide in we have to follow the coastal footpath inland but when we head back we will be able to walk along the shore. 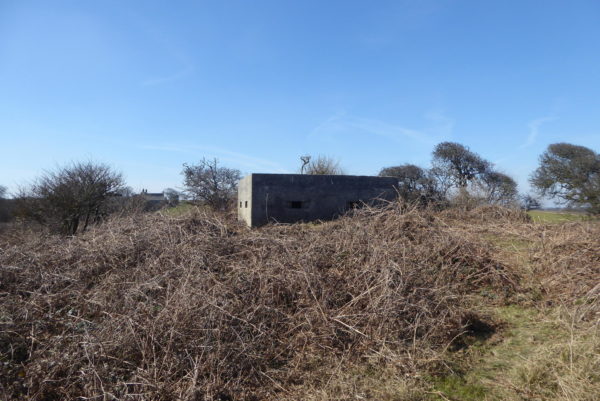 The footpath soon passes Beach Farm and then follows the farm drive towards Benacre and after going over a hill we can see Benacre church in front of us. 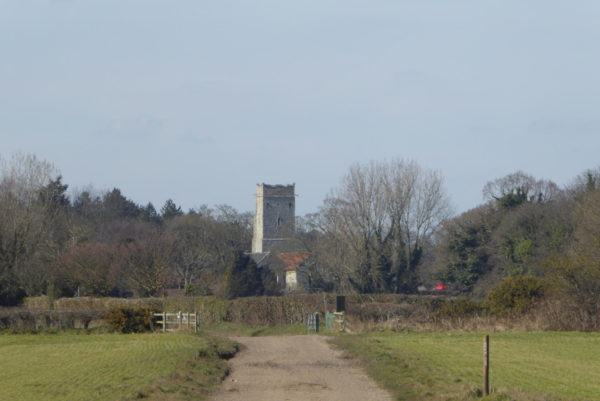 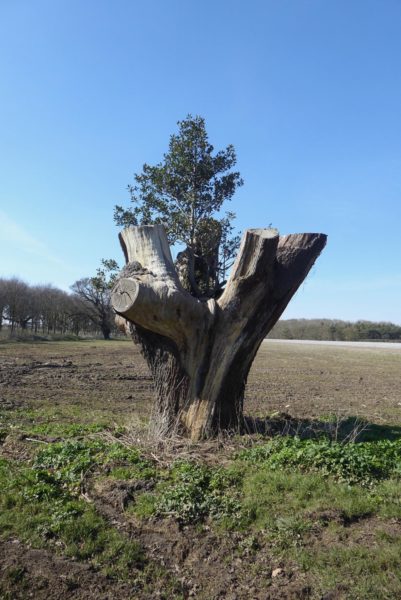 The track goes besides fields and then besides some woodland named Holly Grove. On reaching a road we turn left towards Covehithe. As we walk towards the village we get a cracking view of Covehithe Church. 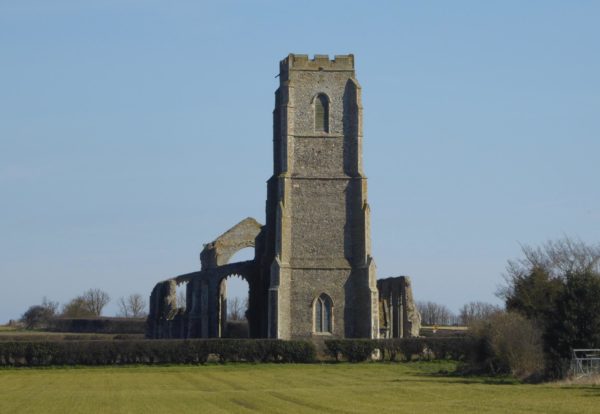 St Andrew’s Church dates from the 14th and 15th century. In the 1600’s the church became too expensive for the parishioners to maintain so they were given permission to build a smaller church within the structure of the original.   It makes an impressive sight. 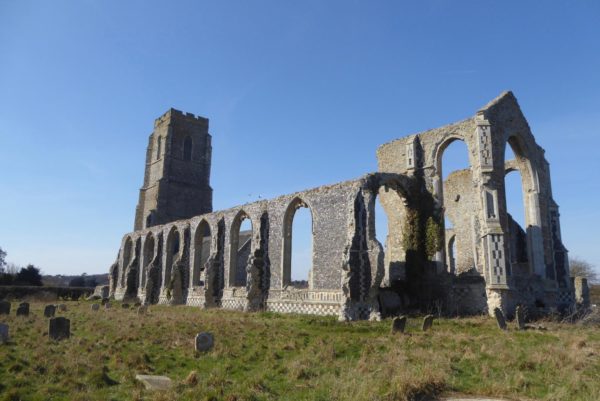 Inside it is very basic, but obviously met the needs of the local community. 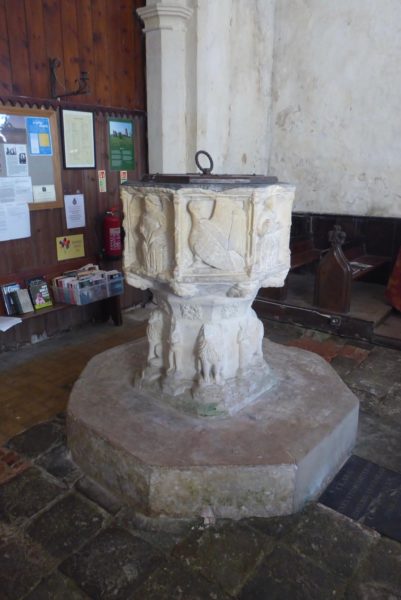 Leaving the church we turn right back up the lane and then quickly take a footpath on the left heading towards the coast and Covehithe Broad. In the fields are free-range pigs. As a nipper in the early seventies I worked on a pig farm, in those days the fashion was for pigs to be kept in barns and very few seemed to be outside. I much prefer to see pigs out in the open; they are great characters and always interesting to watch. Following the footpath signs we soon reach Covehithe Broad. 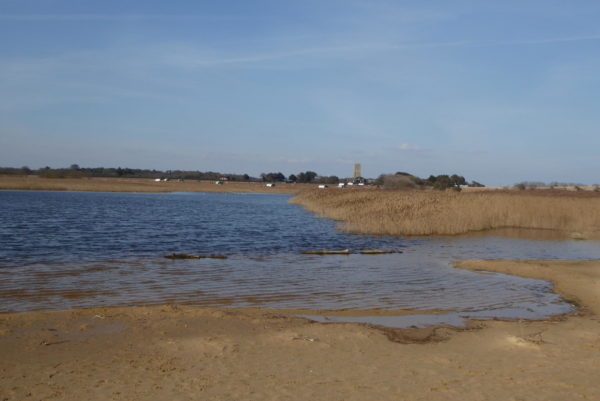 Finding a washed up tree on the beach we decide it is an ideal spot to sit and have a sandwich. This makes a refreshing change, it is the first time this year when it has been warm enough to sit comfortably outside and it’s a cracking spot for a picnic. 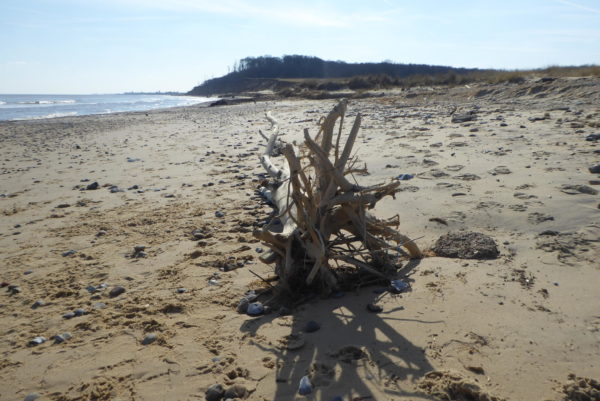 Our friend Richard had talked about the trees on the beach, but if this is it then I am not sure what the fuss was about! Refreshed and with the sun shining we decide to head south along the beach towards Easton Wood. We have not gone far before I understand what Richard meant. This is an amazing spot, I don’t recall visiting anywhere quite like it. 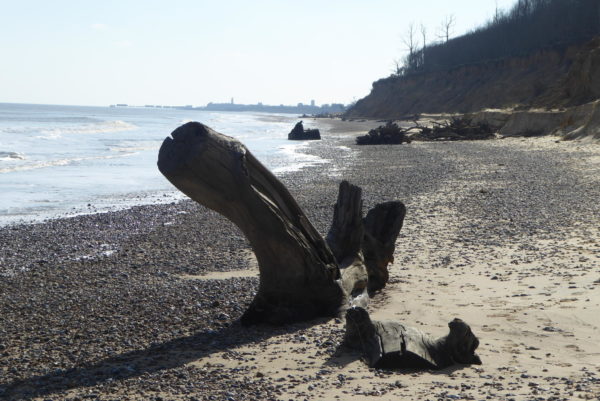 There are substantial trees littering the sand everywhere, clearly some have been here for a while and are embedded in the sand, washed smooth by the waves. 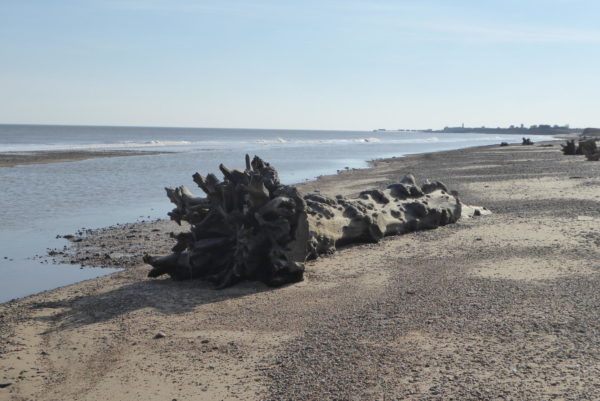 Others, like Lemmings, wait their turn to fall from the cliff edge. It is serenely spectacular. 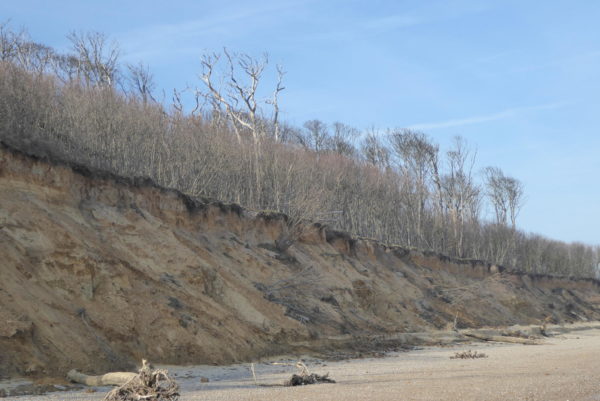 We are in no rush, we are the only folk on this stretch of beach and we slowly wander through the fallen trees to reach Easton Broad. 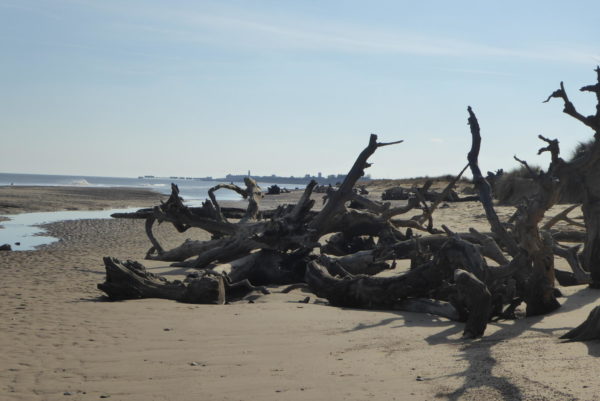 It is decision time now, we can see Southwold a few miles further along the coast, but whilst it is tempting to continue, it will add too much distance to our overall walk and these days Dexter is not too keen on walking much over ten miles. Nor is Lynnie! 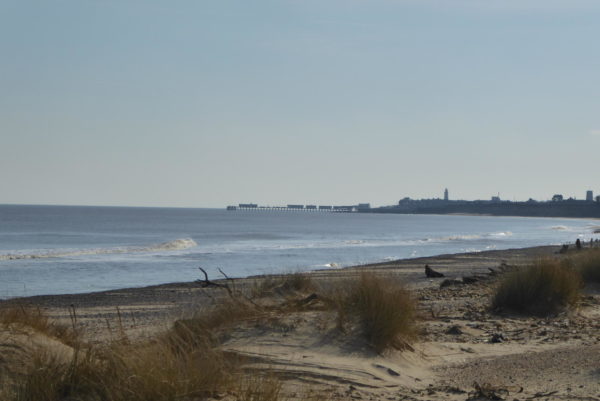 We take the sensible option and turn around and walk back through the unusual tree seascape. The erosion on this stretch of coast is severe. Apparently back in 1910 the historian Rev. Peter Ditchfield wrote in his book Vanishing England “At Covehithe, on the Suffolk coast, there has been the greatest loss of land. In 1887 sixty feet was claimed by the sea, and in ten years (1878–87) the loss was at the rate of over eighteen feet a year.”

A high level of erosion is still an on-going problem, reportedly an Environmental Agency study showed that between 1992 and 2006 246 feet of land was lost at the rate of 17 feet per year. The village of Covehithe is currently about 275 yards from the sea but could well be endangered in the next 30 to 50 years. 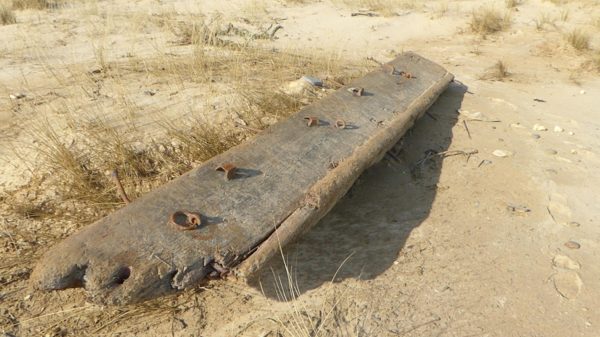 Passing Covehithe Broad we are able to walk below Covehithe Cliffs as the tide is now out. The erosion here is in layers and creates a strange effect. 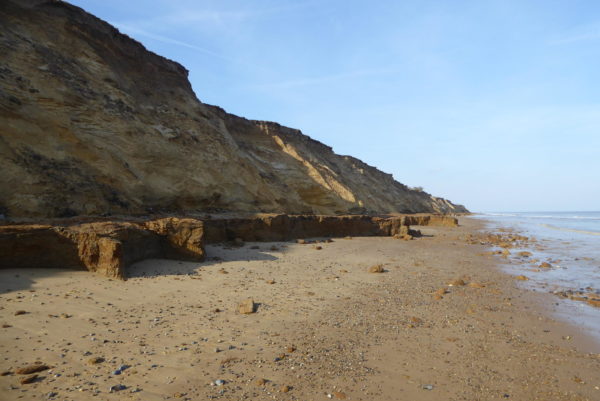 During World War I there was an airfield at Covehithe and it was used by the Royal Naval Air Service as a satellite station for RHS Great Yarmouth. In 1918 it was taken over by the RAF and amongst other planes they flew the Sopwith Camel from here. In World War II there were a number of pillboxes along this coastline, however as we walk along we come across a couple that have now fallen victim to the erosion. 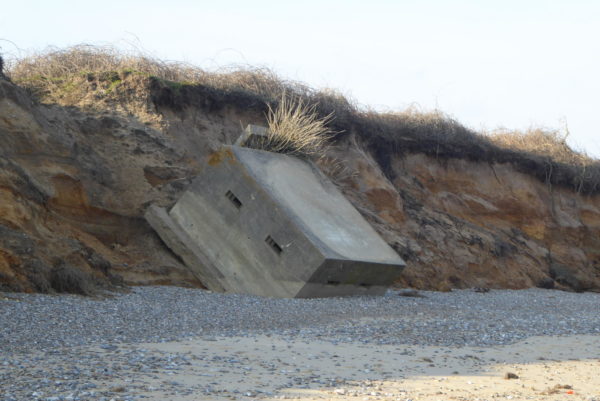 Approaching Benacre Broad we encounter another stretch of woodland jumping off the cliff. 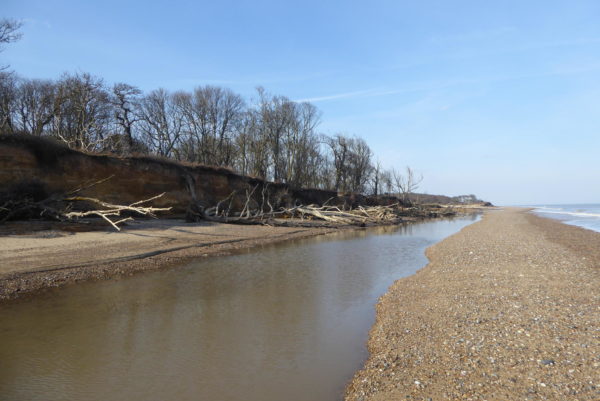 Passing the Benacre Broad there are tree roots creating a natural sculpture. 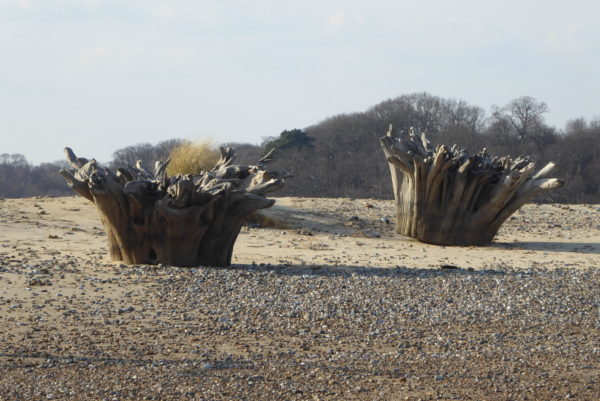 From here we are soon back to the Denes, where we step inland a bit to avoid the palm oil on the beach and cross the Hundred River by the pumping station before retracing our steps back to the caravan site. Our walk has covered 10.5 miles and it is one that will live long in the memory.