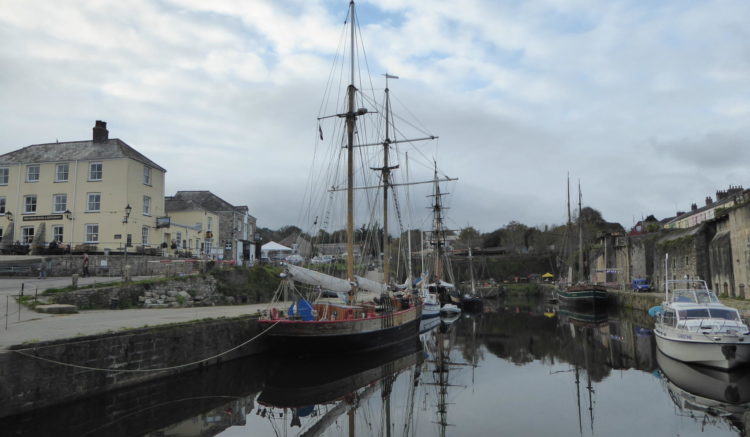 Since arriving in Fowey we have been told on more than one occasion to pay a visit to Charlestown. Apparently it was a location in the television series Poldark, but as we rarely watch television this has passed us by. Although I know Lynnie has a hankering to watch the Poldark series.

Had we put our thinking heads on we would not have visited Charlestown on a Sunday. We eventually find a parking spot in the main car park close to the harbour and decide to delay looking around until after our walk when hopefully the hoards of visitors will have disappeared.

Our walk starts by heading down the harbour road and then turning right just after the Pier Head Inn to join the South West Coastal path as it goes south-westerly towards Du Porth. Blog readers will know I am not too keen on walks involving steep drops, but this section of the coastal path does not cause me any problems. 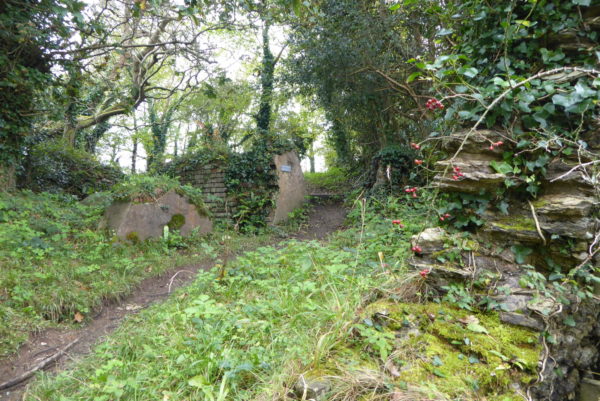 At the top of the climb we stop briefly to explore Crinnis Cliff Battery, which according to the notice board is also know as Charlestown Gun Battery. Charles Rashleigh constructed it around 1793 to defend the entrance to his harbour at Charlestown. Estate workers formed the company of artillery volunteers and manned the position until 1896. 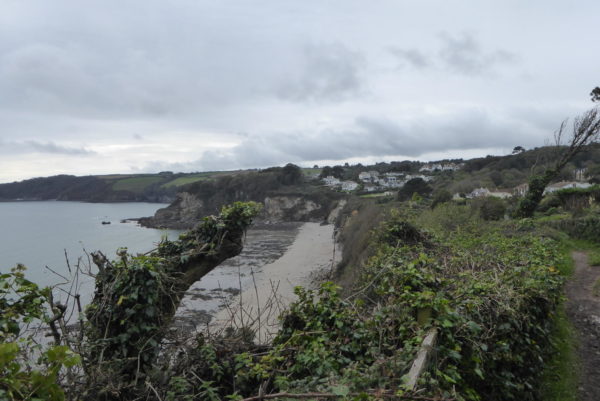 Continuing along the coastal path we are soon above Du Porth beach, on reaching a path down to the beach we descend to enjoy the tranquillity of the spot. It is amazing that there were so many people wandering around Charlestown and yet hardly any one is here. 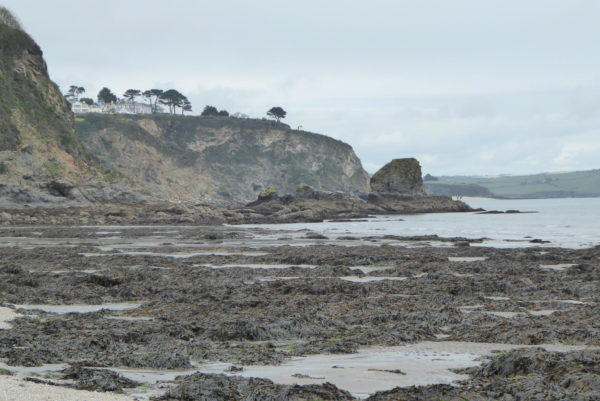 Resuming our walk we return to the coastal path and follow it along to Porth Pean, the beach here is busier but still surprisingly quiet for a Sunday afternoon. 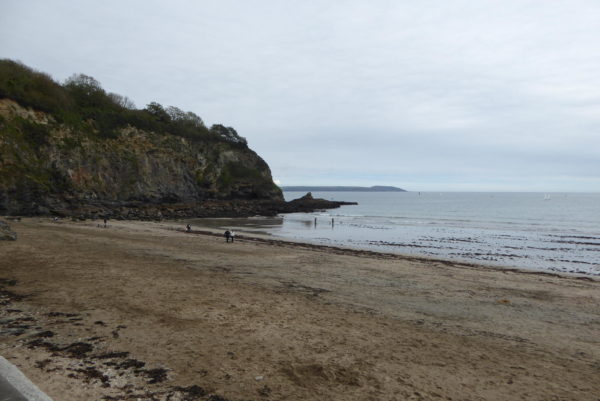 Still following the coastal path we leave Porth Pean, continuing above the cliffs, leaving this route we turn right onto a footpath crossing fields towards Castle Gotha. The views from here along the coastline are stunning. 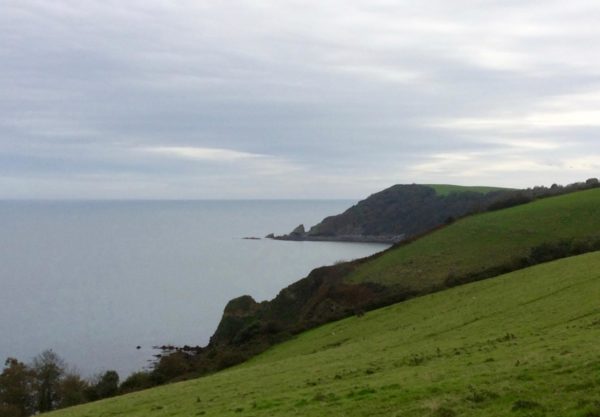 We cross a couple of fields, the OS map shows an old settlement of Gotha Castle but we cannot see any sign of the Neolithic hillfort. Joining a lane we turn right and follow it to a minor road where we turn left. At a crossroads by Lobb’s Farm Shop we turn left and then in less than a quarter of a mile turn left again on a lane sign-posted to Trenarren (Black Head).

After three quarters of a mile the road descends into the hamlet of Trenarren. As the tarmac road ends we join a footpath along a track that heads to a small cove. 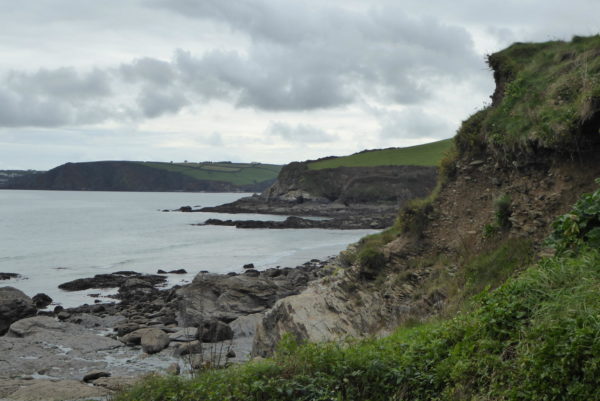 We retrace our steps past the cottage overlooking the cove and turn left along the coastal path. Within a few hundred yards the coastal path heads to the left, but we continue straight on along a woodland path besides a stream. After a muddy section we leave the woods and continue on the path along the edge of a field. We are now heading towards Polglaze and are soon on an old sunken cart track. 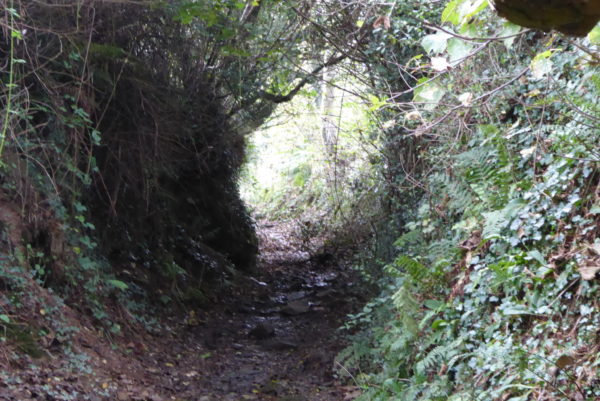 On reaching a minor road we turn left and follow this road towards Pentewan. As we near the village the road descends steeply and the banks are strewn with litter. For the next quarter of a mile we pick up as many cans and plastic bottles as we can carry before depositing them in a village bin. 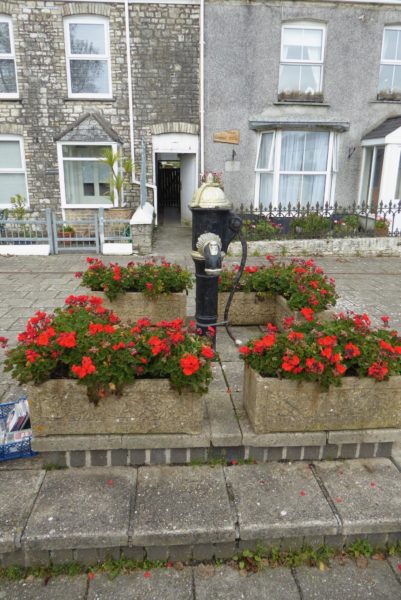 Having done her bit to keep the countryside clean Lynnie feels that she deserves an ice cream as a reward and who am I to disagree. Pentewan is an interesting village that now has a large holiday park and the local economy is based around tourism. However, like so many other places this village has a rich industrial heritage.

There has been a harbour in the village for centuries and this was once a fishing community. According to the village website the first harbour was built in 1744 by local landowners. Then in 1818 Sir Christopher Hawkins, a local land and quarry owner, developed the harbour. After this work was completed in 1826 the harbour became a major port for exporting china clay, coal, limestone and timber. 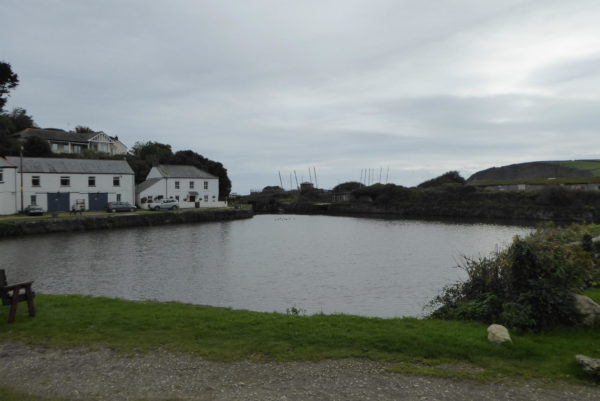 It is difficult to believe today, but this port once shipped a third of Cornwall’s china clay. The only problem was that, as a consequence of all the local mining, the estuary kept silting up so by 1940 it was no longer in use as a port. Until the 1960’s small boats could still gain access but now the harbour is cut off from the sea. 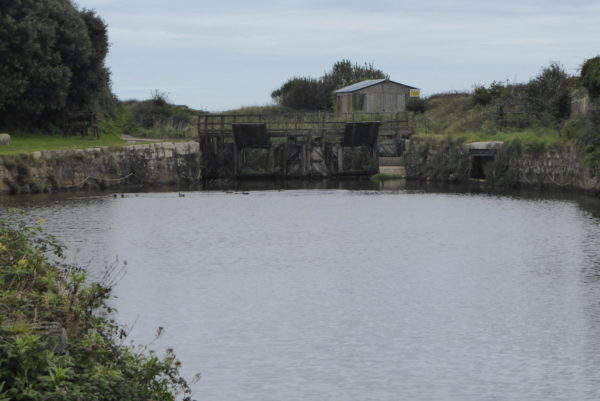 We walk through the village passing the Ship Inn and then just before a stone bridge we take a footpath on the right passing a cycle hire shop. This route was once the tramway constructed in 1829 by Hawkins to transport china clay to the port.

Originally horse drawn trams ran through the Pentewan Valley from St Austell. In 1873 the tramway was converted to a 2’6” narrow gauge steam railway. Initially the well constructed path heads through trees that grow out of the surrounding marshy land. 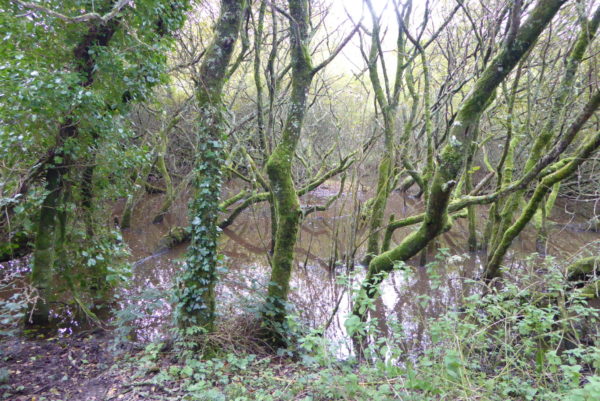 But as we progress the path is besides the St Austell River, this has been straightened out as part of flood prevention measures. As we walk along we arrive at a notice board showing the catchment area for the river, from this it is easy to see why it is necessary to ensure water flowing off the surrounding hills has easy access to the sea. 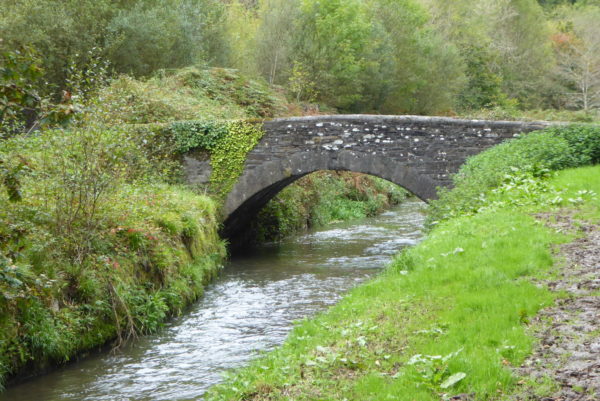 We follow the trail for 3 miles until we reach the B3273 on the outskirts of Tregorrick. After a short section besides this road we turn right to follow a minor road through Tregorrick, heading steadily uphill we keep going straight on at a cross roads and at the top of the hill pass St Austell Rugby Club’s ground. 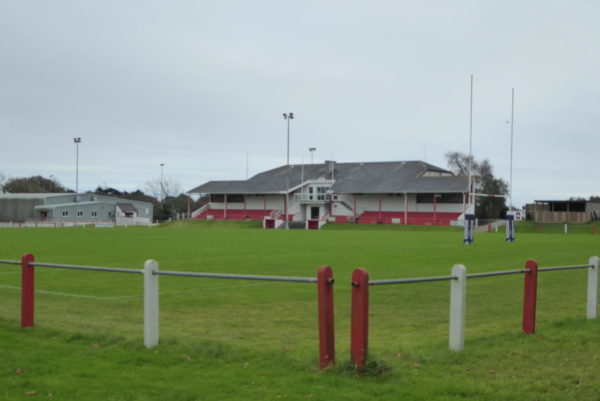 After heading across another crossroads we continue along a pavement on the road going downhill past Duporth to Charlestown. Our stroll has covered nine miles and whilst we have been away the crowds have dissipated, making it an ideal time to wander around Charlestown. 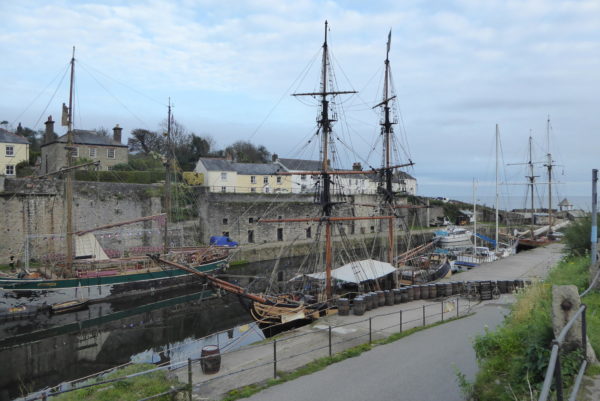 It is easy to see why this is such a popular location with film crews, the port was constructed between 1791 and 1801 by Charles Rashleigh to export copper from local mines and then became a major shipping centre for china clay. 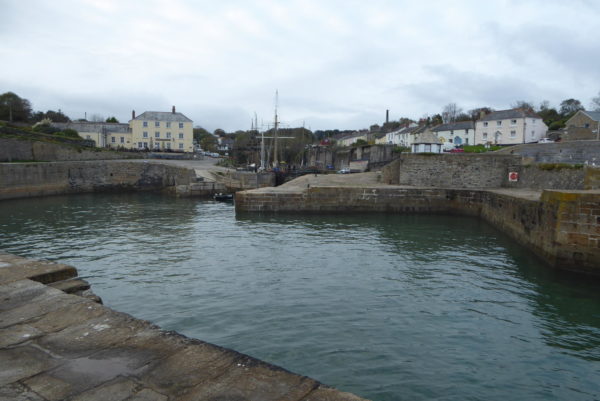 Earlier when it was crowded with people we hurried to get away from the harbour, but now with only a handful of people wandering around it is a pleasant place to explore. However, we can’t stay too long as we are on the move again tomorrow and need to get back to the caravan to start packing up. 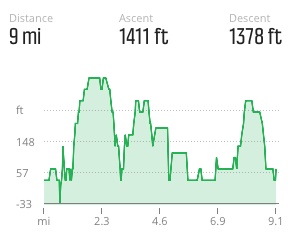