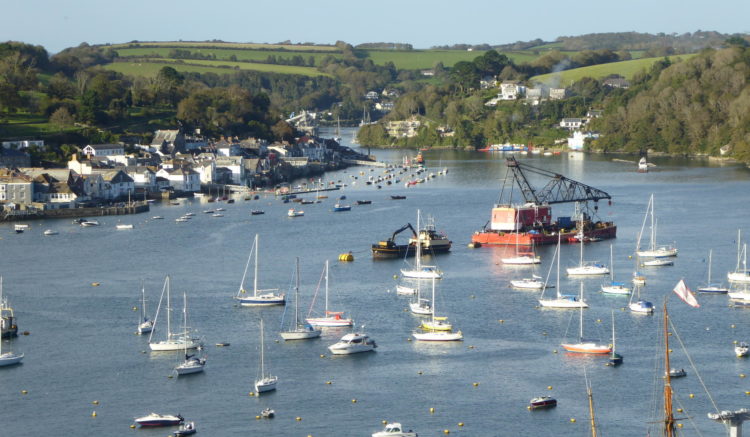 For the last four years we have been blogging about our travels, for a couple of years the blogs have been shared on Facebook, but it is only a few months ago that the @2DogsAwning Twitter account was set up.  After one of my recent tweets someone recommended we do the Hall Walk whilst in this area.  So after checking out the route on the OS map we are following it today.  We start our walk from Fowey CL, turning left from the site along Passage Lane down into Fowey.  There is little traffic at this time of year and most of the vehicles are travelling at slow speeds so even without a pavement it is okay walking down the narrow road.

As we enter Fowey we leave the lane and cross the car park to await the car ferry that crosses to Bodinnick on the opposite bank of the River Fowey.  Whilst we wait a chap arrives with a couple of crates of crabs.  Immediately the dogs’ noses are twitching.  We have discovered to our cost that given half a chance they will munch a crab, unfortunately they don’t seem to agree with them and the consequences are definitely to be avoided in a caravan.

The dogs have been on a couple of car ferries and don’t seem phased by being afloat.  Mind you they are both keeping a close eye on the crates of crabs!  Arriving in Bodinnick we pass the house that was once the home of the author Daphne du Maurier.  We walk up the hill passing the Old Ferry pub and then reach a way-marker on the right signed the Hall Walk. 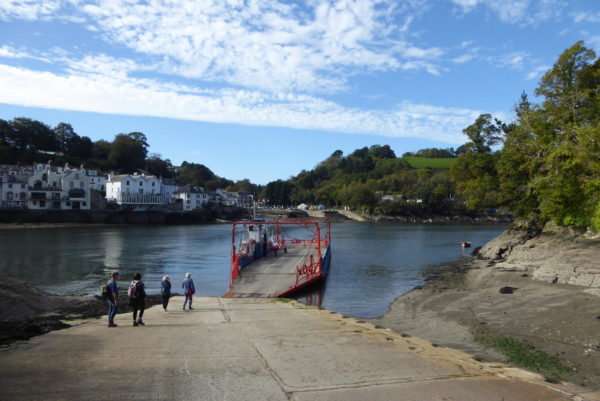 The origin of the name is said to come from the nearby 13th century Hall Manor.  Apparently as far back as the 16th century there are records of a promenade that ran from the Manor to Penleath Point.  We soon reach a War Memorial overlooking the estuary. 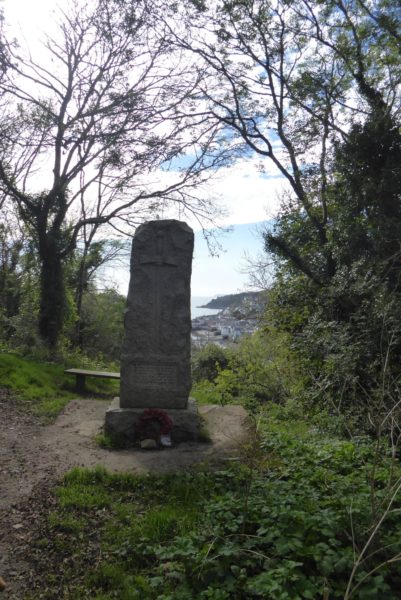 From here the route is clear and easy to follow, there are occasional views out over the estuary, and then we reach a second monument above Penleath Point.  This one is known as the ‘Q’ monument and is dedicated to Sir Arthur Quiller-Couch, known as ‘Q’. 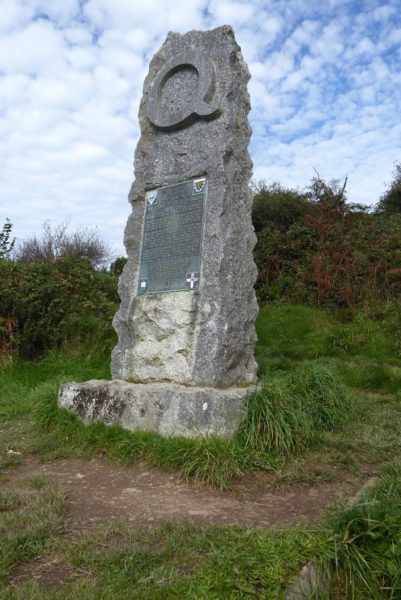 Apparently Q was a renowned Edwardian author and scholar, but both he and his work are unknown to me.  Obviously there was something missing from my education.  From the monument there are stunning views of Fowey and Polruan. 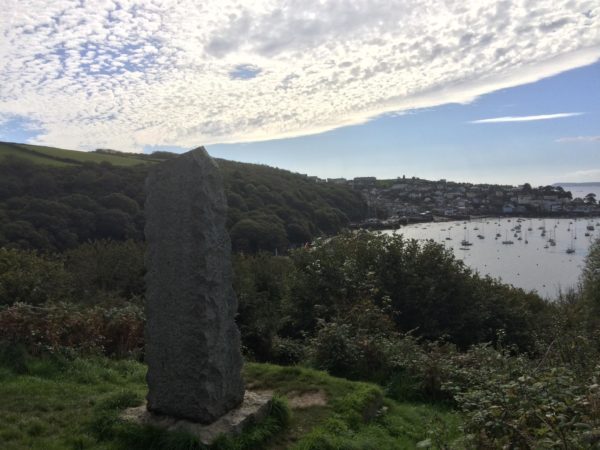 Continuing on the path we soon encounter a mass of butterflies warming themselves in the afternoon sunshine.  I don’t think I have ever seen so many Small Coppers in one place. 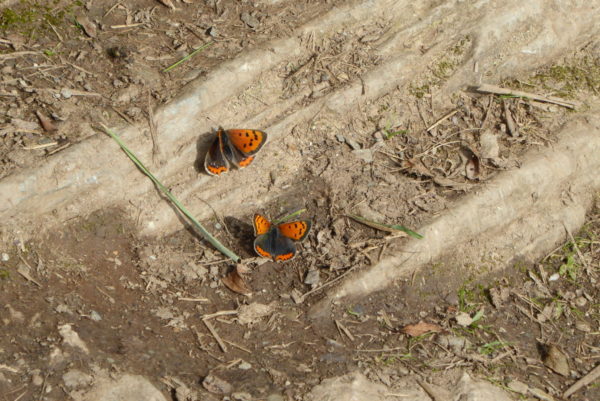 There are also Red Admirals and Speckled Woods but it is a cracking Peacock butterfly that really catches the eye. 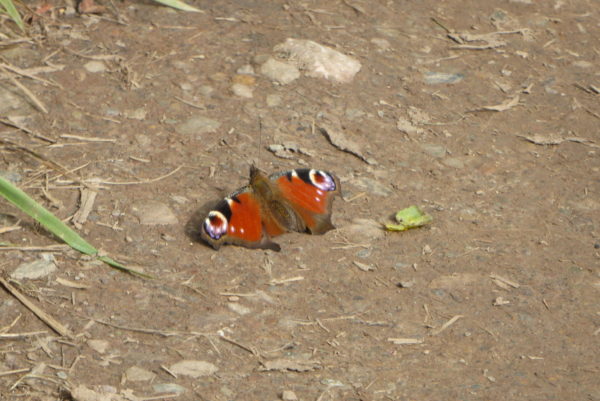 After passing open land we re-enter woodland and then go along the edge of a field before re-joining the woodland path as it heads steeply downhill to Pont.  This is a tranquil spot, but in times past would have been a hive of industry with it’s quay and limekilns on both sides of the creek. 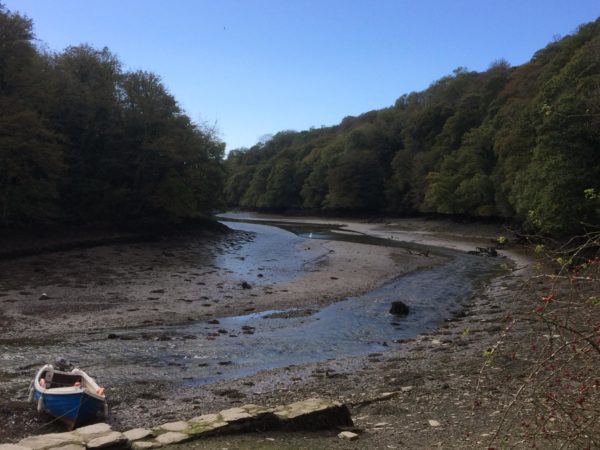 It is difficult to believe, but apparently, along with the two sets of limekilns this hamlet once had a granary, malt house, warehouse, corn mill, three watermills (dating from 1298, 1309 and 1423) a sawmill, beer house and blacksmith.  We cross the footbridge and take a look at one of the limekilns it is pretty impressive. 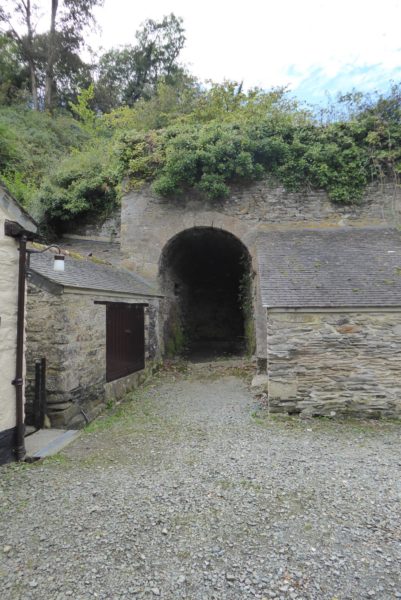 The walk continues by taking the steep path in front of us and we follow this all the way to the 14th century church of St Wyllow, Lanteglos.  The interior of this church is stunning with its wooden roof and ornate carvings. 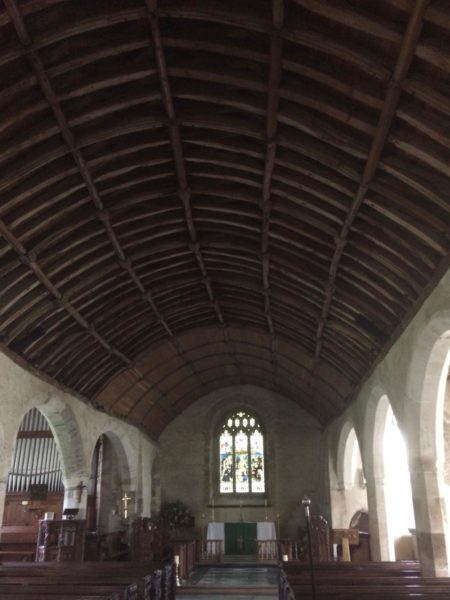 There is also an interesting feature we have not see elsewhere, a list of the gravestones and a map showing their location in the churchyard.  I have been doing some research into my family history and plan to visit a few churchyards over the coming months; I doubt I will find as helpful a resource as this. 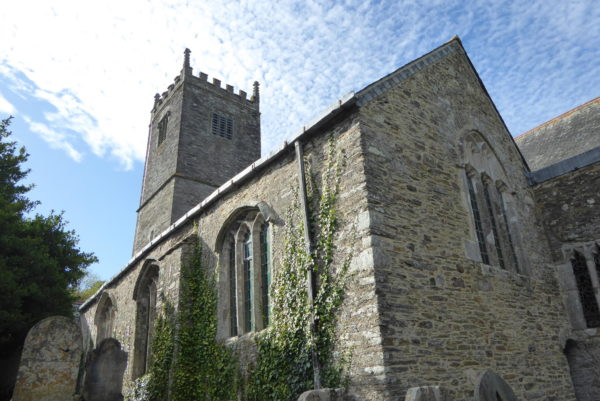 After our wander we return down the path and after crossing a lane take a footpath on the left that takes us along the edge of open fields and then onto a wooded path.  As we go we get some cracking views over the estuary. 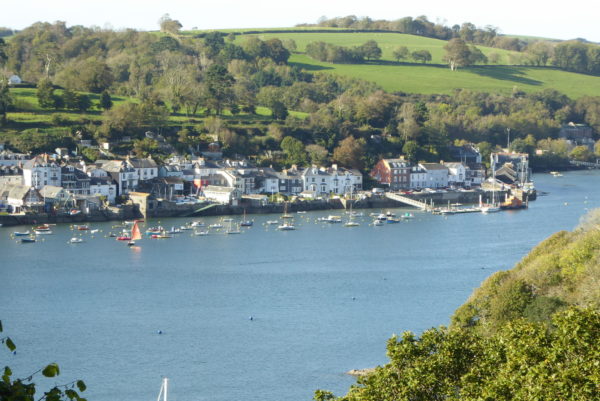 Soon we pass a World War II Pillbox, the trees have grown up and closed in obstructing the view where once it must have had a clear line of sight. 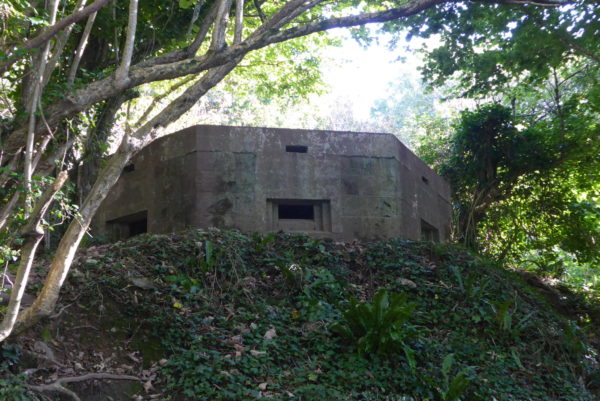 The path enters Polruan and we wander down to the quay where the passenger ferry heads back to Fowey.  Then we have a change of heart and decide to explore this old fishing village. 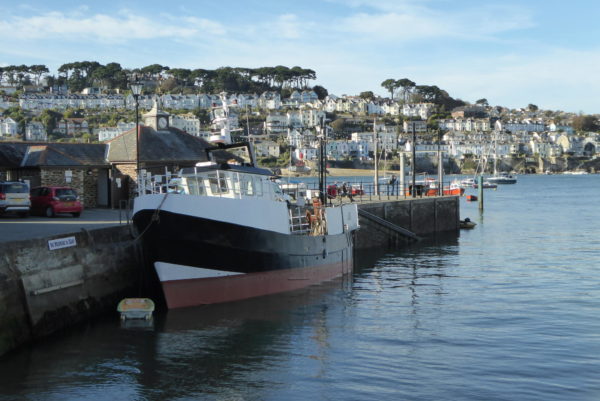 We wander through the narrow village streets to reach Polruan Castle.  This is a 15th century blockhouse built to defend the harbour.  Part of a pair, there was a matching blockhouse on the Fowey side of the estuary; they were linked by a large chain, which could be raised to protect the harbour from invasion.  Little remains of the Fowey blockhouse. 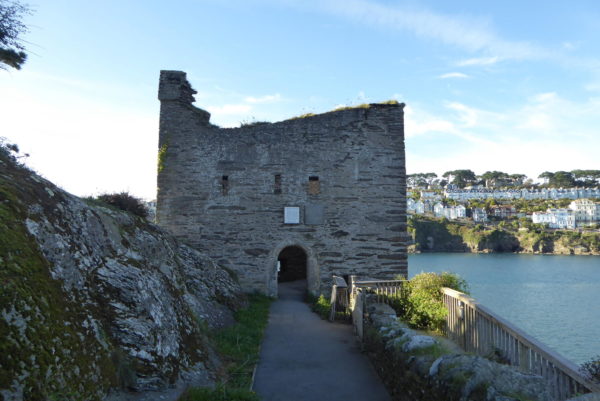 The views of the estuary are absolutely stunning. 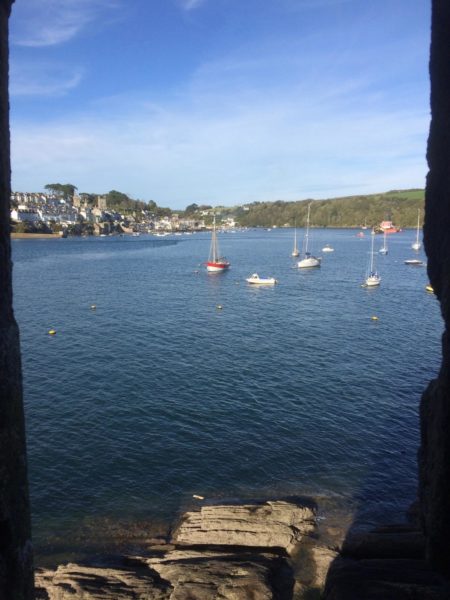 Next we wander up to St Saviour’s Hill following the route of the South West Coast Path and briefly stop at the remains of St Saviour’s Chapel close to the Coastguard station.  The chapel was built before 1284 and as long ago as 1734 was recorded as a ruin.  From here we walk down through the village to reach the quay and board the passenger ferry back to Fowey.  Having now done a few trips on small ferries the dogs are quite relaxed as we motor across. 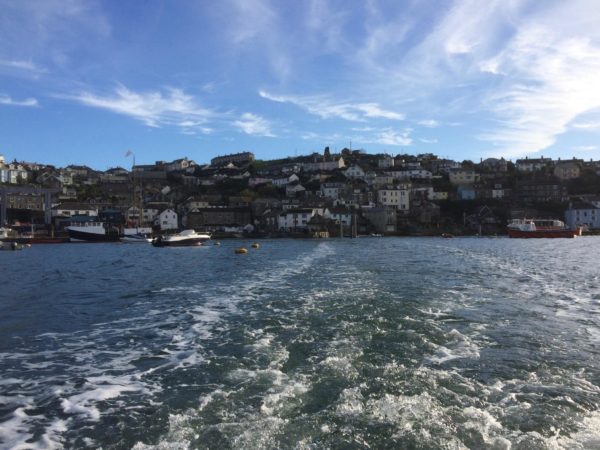 Landing on the quay I am tempted to suggest we pop into the King of Prussia for some light refreshment.  We ate here yesterday evening and the beer was excellent.  The pub has an interesting history, mainly related to smuggling and its name comes from one of the inn’s 17th century residents, John Carter.  He was a smuggler with the nickname the King of Prussia Cove. 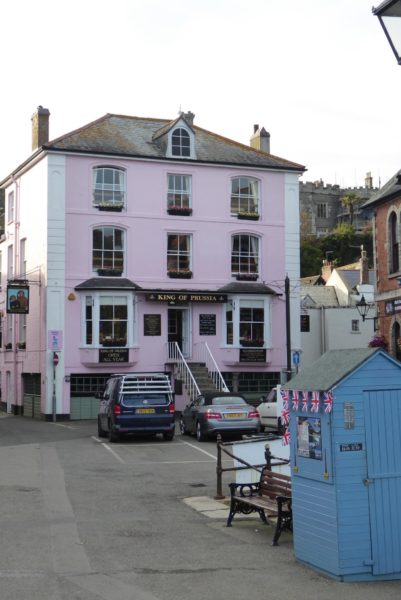 Inside the pub they have an interesting record of it’s history, in 1895 the lease of the pub was sold to Walter Hicks, the founder of Hicks Brewery that later became the St Austell Brewery.  We wander back through Fowey to reach Fowey CL.  Our walk has covered six miles and once again it has been a day of discovery and picturesque scenery. 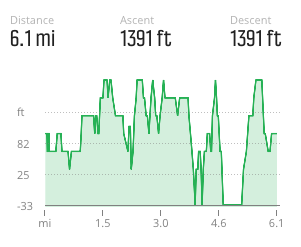