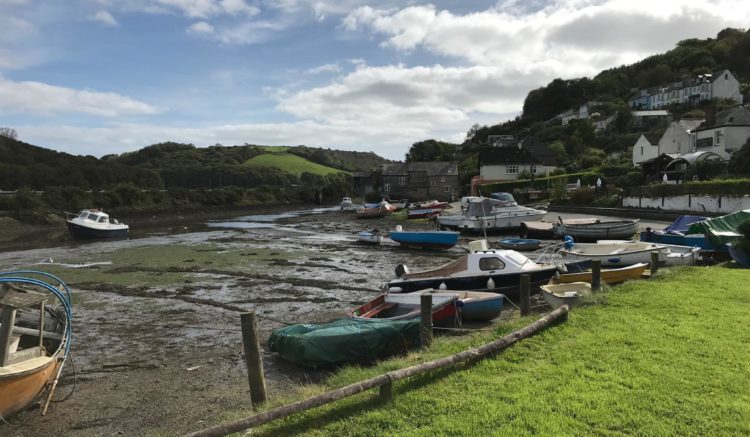 Since we started caravanning in 2012 we have travelled widely around the country, but this is our first trip into Cornwall. Yesterday we had a straightforward journey from North Devon to Fowey CL, which as the name suggests is just outside of Fowey.

Many years ago we visited this area for a long weekend and stayed in bed and breakfast and did some sight seeing but not a lot of walking. We are, therefore, looking forward to getting the boots on and wandering about. As soon as we pitched up yesterday afternoon I took the dogs for a walk into Fowey. This involved walking along the road, luckily there was not much traffic and it was a pleasant stroll. Our walk today will end up going through Fowey, but there are a few miles to cover before we get there.

On leaving Fowey CL we turn left and walk along the road towards Fowey. There are no pavements, but the traffic is light and the cars that pass are not going too fast. On reaching Penventinue Lane we turn left along the tarmac lane. We have now joined the route of the Saints’ Way; this is a long distance path covering around twenty-seven miles as it crosses Cornwall from Padstow to Fowey. 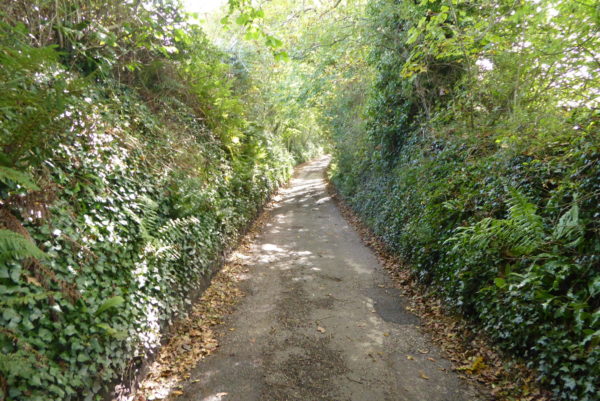 After passing Penventinue we turn right along the signed footpath of the Saints’ Way, the sun is shining and a number of Red Admiral butterflies are sunning themselves on the nettles. 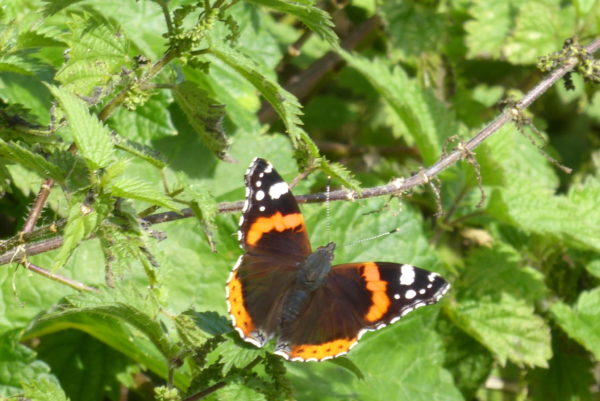 After following the path besides a fence we reach Colvithick Woods and then continue on the track going downhill through attractive woodland. 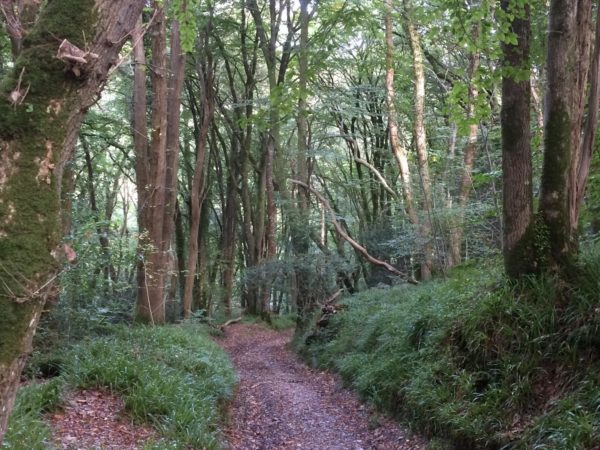 Soon we are walking besides a stream with a small waterfall. 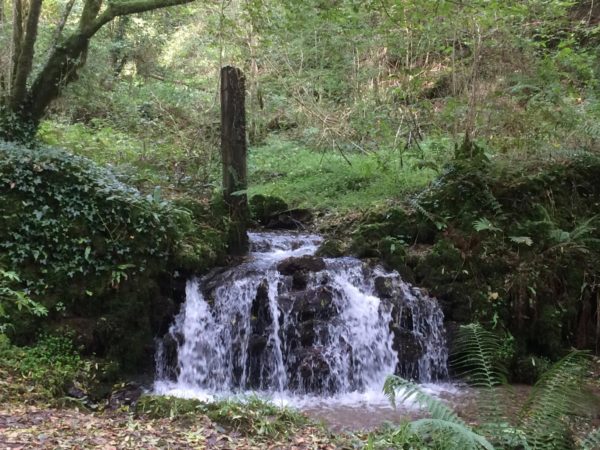 As we approach Bodmin Pill the footpath crosses a bridge and then climbs up onto the Golant Down, we follow this route as it goes through woodland above the estuary.  Occasionally we get a glimpse of the estuary through the trees. 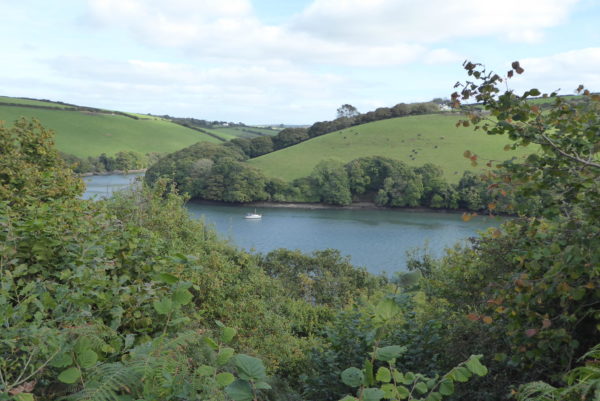 The path leads us into Golant, this is a very attractive village and we wander down to the waters edge, the tide is out but the village green is the ideal place to have our lunch. 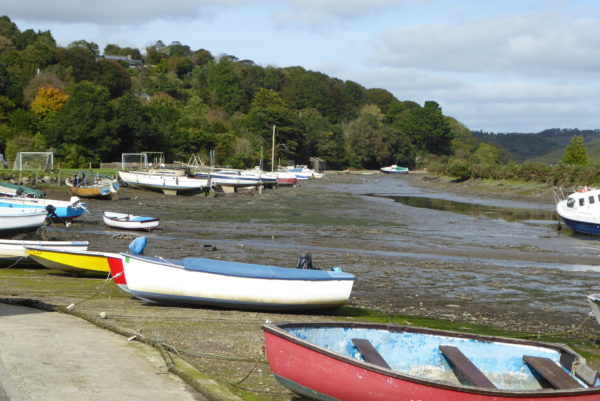 Our walk continues along Water lane and then at a cross roads by the village reading room we turn right up School Hill and then fork to the left to go up Church Hill to visit the St Sampson’s Church, thought to have been built around 1509. 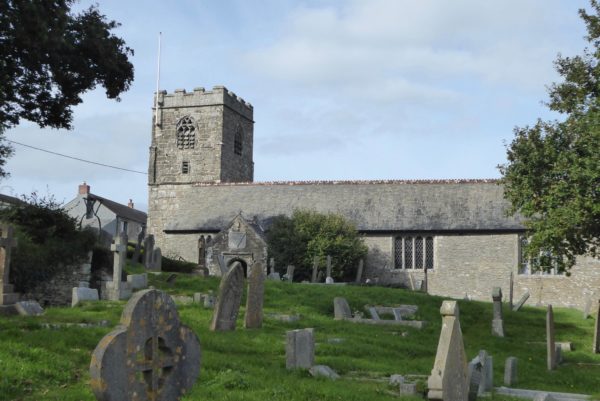 We have visited a lot of churches on our travels, but I cannot recall visiting one dedicated to St Sampson. Sampson of Dol was the son of Amon of Demetia and Anna of Gwent (she was the daughter of Meurig ap Tewdig the King of Glamorgan and Gwent). He was raised by Saint Illtud Abbot of Llantwit Fawr. After being ordained as a Bishop he travelled to Cornwall and set up a community nearby. 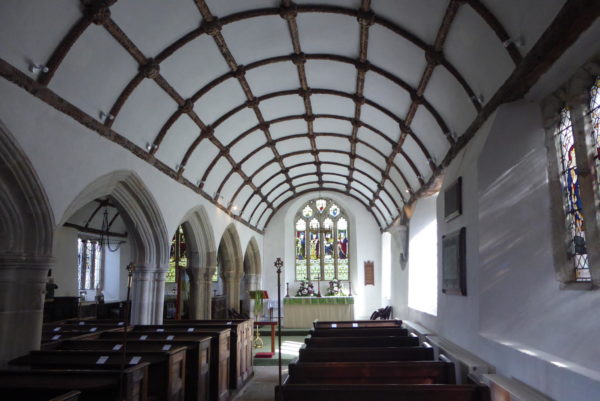 This is an attractive church with many interesting things inside. It is also known for its holy well besides the main entrance. 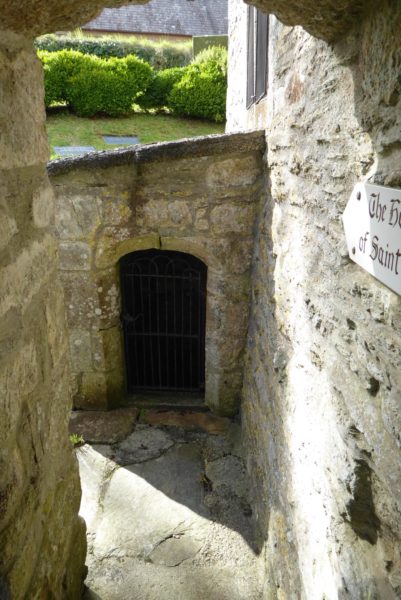 Resuming our walk we follow the road out of the village, after a mile we reach a cross roads with the B3269. Here we go straight across to follow the road for another mile to reach Tywardreath. We wander through the village towards the church; close to the churchyard is the Market House built in 1837 on what was the site of the Old Butter Market. 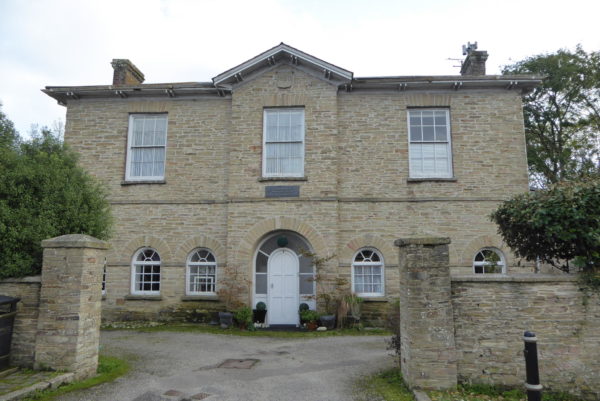 This village has a long history linked to the local tin mining industry and there are numerous interesting properties. The local population declined significantly after the collapse of the mining industry in the 1860’s, the Market House was converted to a Police Station and local pubs and shops closed. The fine looking New Inn remains. 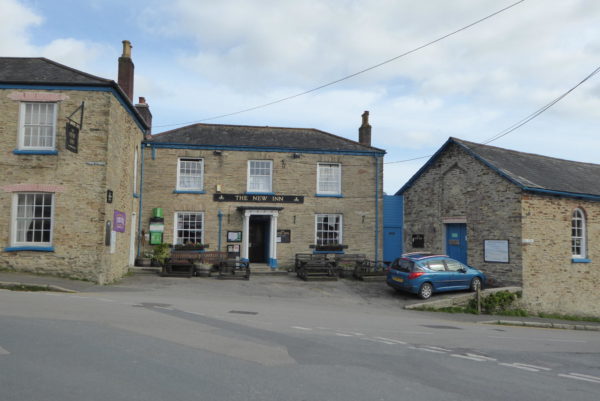 I could be tempted to sample some local ale, however we still have a few miles to cover. Just down the road from the pub is the substantial Wesleyan Chapel, built in 1828. 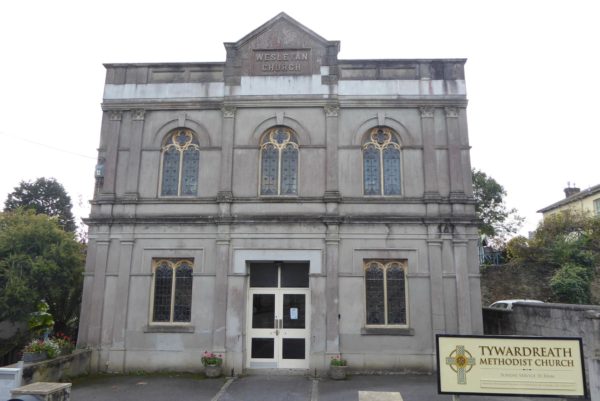 We leave the village along Well Street and then continue on the road as it crosses Tywardreath Hill and descends to Polmear. On reaching the A3082 we cross it and turn left along the pavement to go under the railway bridge and then, just before the Ship Inn, turn right along a road leading to a holiday park. After a couple of hundred yards we enter a large car park and head diagonally to the left to take a footpath across a stream and then up steps.  At a junction of paths we turn right along the South West Coastal Path, which overlooks Par Beach and St Austell Bay. 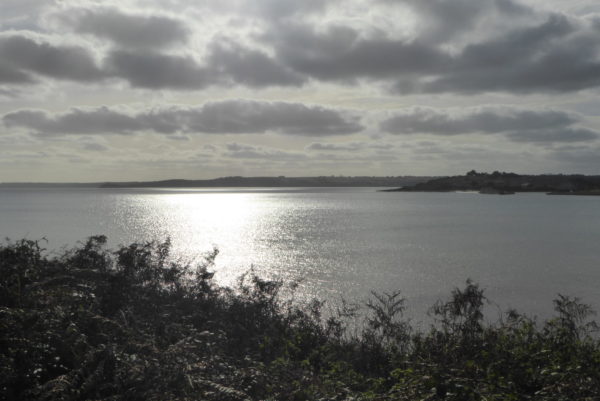 We could follow this path to Polkeriss; however, we have decided to follow the Saints’ Way route so after admiring the view we turn around. We soon pass the steps to the car park, but continue on the path passing behind a disused quarry and at a junction of paths turn right picking up the Saints’ Way.

Initially the path is a track but emerges onto pasture heading diagonally left, on reaching a wall we cross into another field and then another to reach a stile. We are on the verge of the A3082; there is limited visibility so we join the road with care, crossing to the pavement on the opposite side.

At a junction we fork right along the Saints’ Way towards Polkeriss. We continue along the lane to the Tregaminion Chapel of Ease, built in 1813. There appear to be two Celtic crosses in the church yard, one close to the entrance of the church. 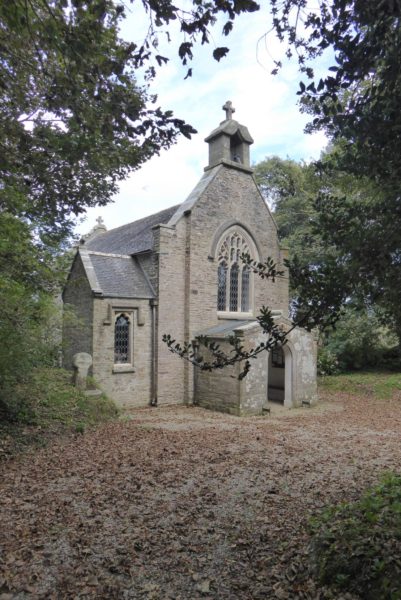 The other is to the right by trees. The church is locked so we are unable to have a look inside. 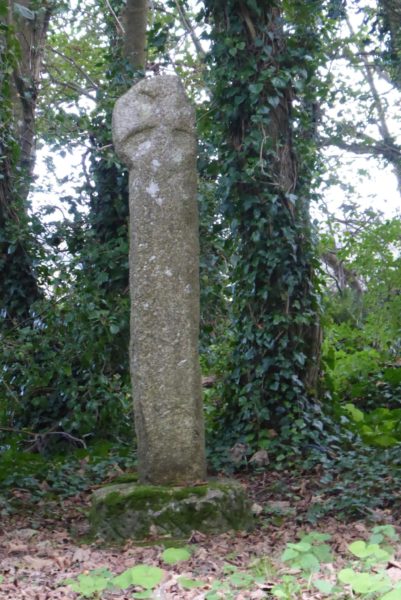 Resuming our walk we continue taking the track down to Tregaminion and following the footpath signs around the farm. This is a well-marked route and easy to follow. To our right we spy Gribbin Tower, an 84-foot high, square beacon tower erected by Trinity House in 1832 to distinguish Gribbin Head from Dodman Point and St Antony’s Head. 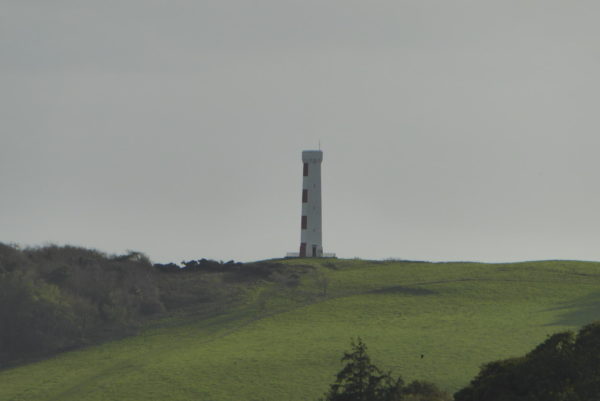 The path eventually joins a lane and our route is to the right and then left at a junction, still following the Saints’ Way we continue on a track on the right towards Readymoney. Old tracks are always interesting; it is easy forget that they are routes that many generations have trod before us. 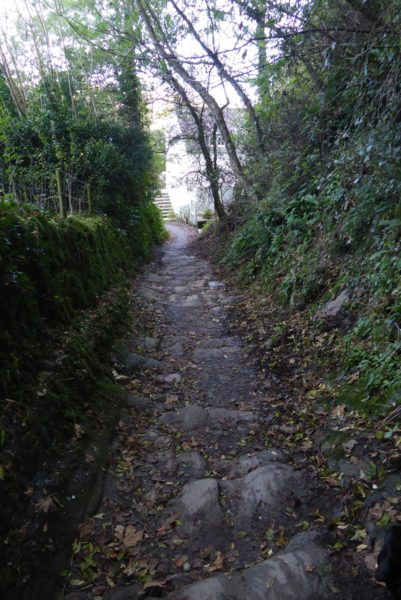 We briefly stop at Readymoney Beach. This is a cracking spot, some hardy soul is in the water, it is a pleasantly warm afternoon, but not that warm! 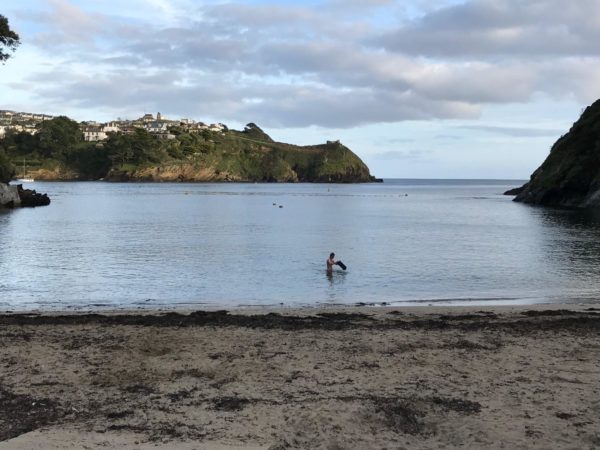 From here it is straightforward route into Fowey. I had a wander around yesterday but this is Lynnie’s first time here. 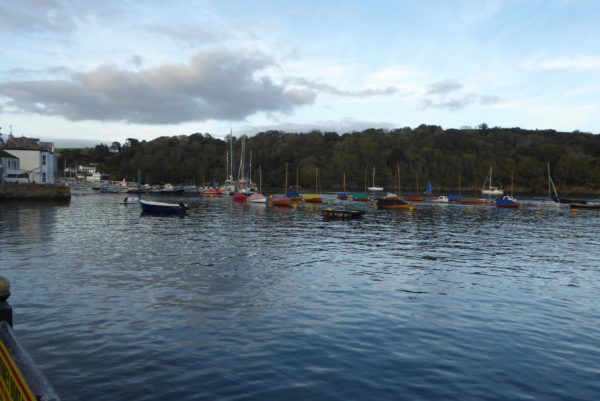 On leaving the Quay we follow the streets as close to the estuary as possible and then leave the town on the B3269 uphill to the entrance to Fowey CL. We have covered eleven miles and it has been a stunning walk. Now it’s time to get the map out and plan tomorrow’s route. 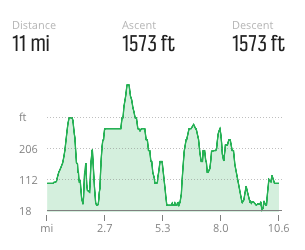