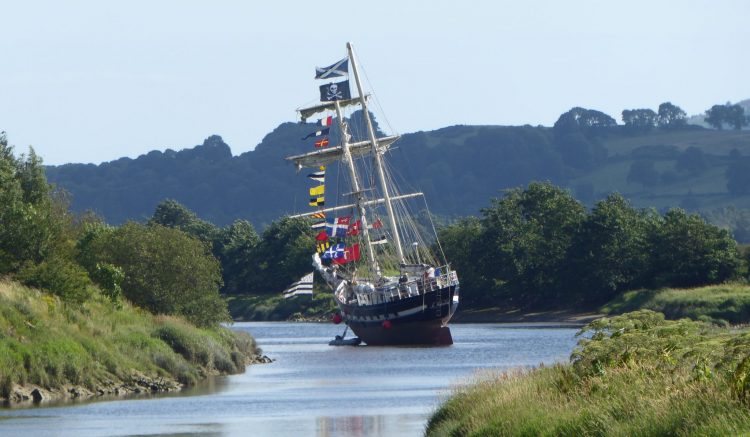 Over the last week or so we have driven through Dumfries on a number of occasions but never stopped to wander.  We like to explore towns when the shops are closed, it provides opportunities to stop and appreciate the buildings and learn a bit about the history of a town.  It also means we don’t spend money on things we don’t really need!  Dumfries is full of interesting buildings and packed with history so we are in for a enjoyable afternoon.

We park alongside the River Nith close to St Michael’s Bridge and follow the river south soon entering Dock Park.  This is a wonderful park, packed with families playing on a sunny Sunday.  In the past this was part of the port of Dumfries, at high tide the River Nith was navigable to large vessels, enabling the import of goods from the English colonies.  Apparently records from 1833 show the main imports as coal, slate, iron, timber, tallow, hemp and wine, whilst the exports were wool, freestone, oats, wheat and barley.

Dumfries had a significant tweed industry and as the number of mills expanded in the 1850’s so did the dock.  However, the arrival of the railway provided an easier way to transport goods and the dock declined.  The last ship tied up at Dockfoot Quay in 1916.

Across the river is the splendid Rosefield Mill, this mill was built in 1886 and is a listed building now in a poor state of repair.  Hopefully at some point someone will see fit to restore it to it’s former glory. 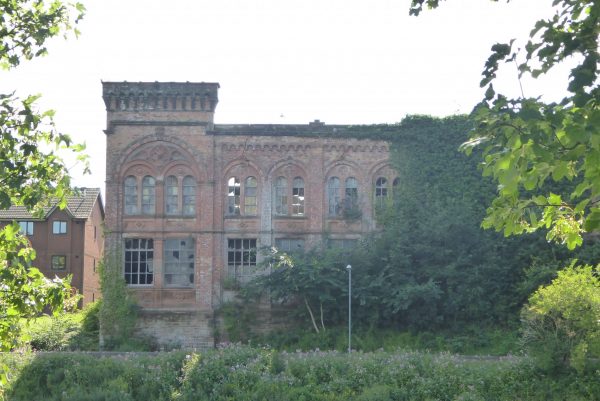 The park has a Victorian bandstand, first opened in 1898, on its opening day the Dumfries Town Band played to an audience of over 3,000 people.  It was refurbished in 2013 and is still used for events. 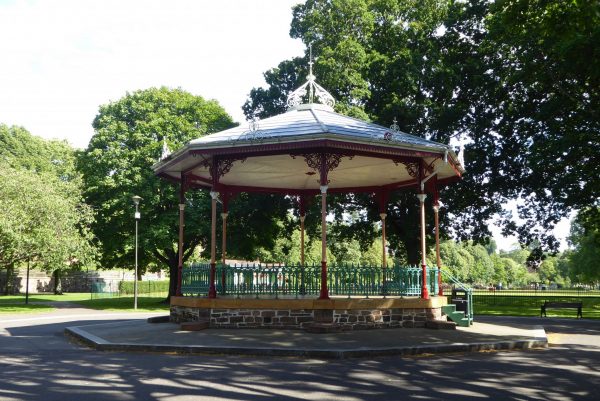 Alongside the bandstand is a Titanic Memorial, at first it seems an odd place for such a memorial, but all becomes clear when reading the inscription. “In memory of John Law Hume, a member of the band and Thomas Mullin, Steward, natives of these towns who lost their lives in the wreck of The White Star Liner “Titanic” which sank in Mid-Atlantic on the 14th Day of April 1912.  They died at the post of duty.”  Thomas Mullin was a member of the Dumfries Band and was first violinist in the Titanic’s orchestra. 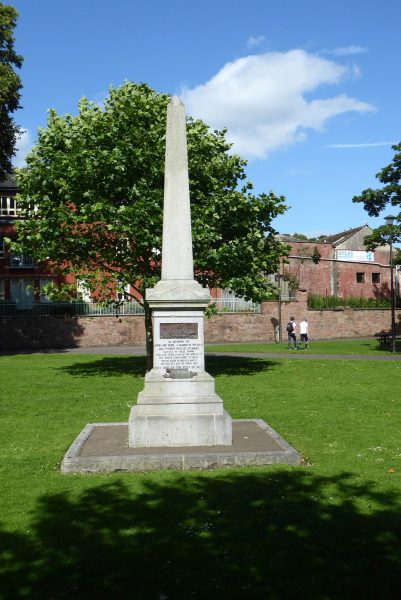 Carrying on along the path besides the river we pass a series of cast iron benches.  A plaque states that the oldest of these seats dates from 1828 and most of them came from the grounds of the town’s old Infirmary.  They are a wonderful collection, the oldest bench has an inscription “For the Sick and Poor”. Just imagine the number of people who would have rested on these over the years. 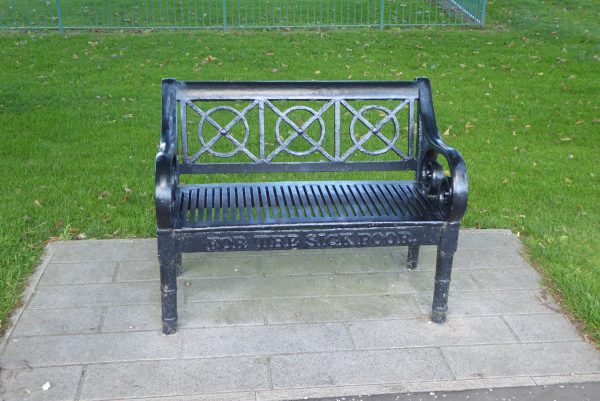 As we continue down the river we come to the Kirkpatrick Macmillan footbridge (or KM Footbridge) across the River Nith.  I have not previously heard of this chap but most of us have used his invention at some point in our lives.  Kirkpatrick Macmillan 1812-1878 is acknowledged by many as being the inventor of the pedal bicycle.  The nearby information plaque explains that he was a local blacksmith and around 1840 he constructed the “velocipede” a vehicle that could be propelled without putting feet on the ground.  Apparently, he was not commercially minded so did not patent his invention, but others soon saw the potential.

We do not cross the bridge but continue on the river path and soon have playing fields on our left.  Besides the river bank there is still evidence of where boats would have moored. 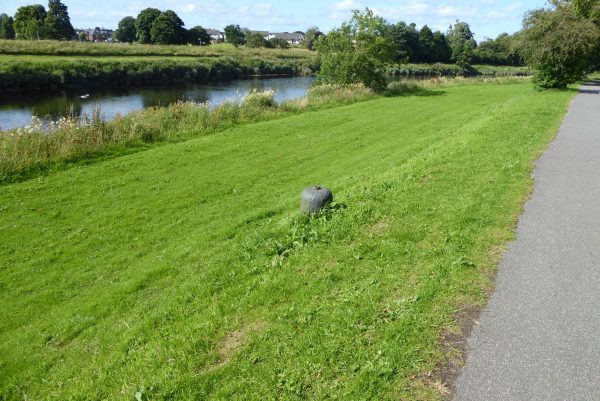 The path soon leads us to Kingholm Quay; apparently built in the early 1800’s replacing an earlier quay built around 1746. 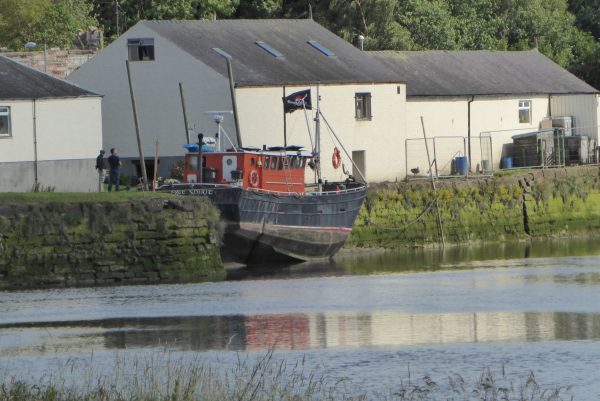 We are still heading away from Dumfries and whilst it is tempting to keep walking we decide to turn around.  Our original intention was to look at Dumfries and we must allow time to have a decent mooch about. We therefore retrace our steps to the KM footbridge, this time we cross and then turn right on the path besides the river. 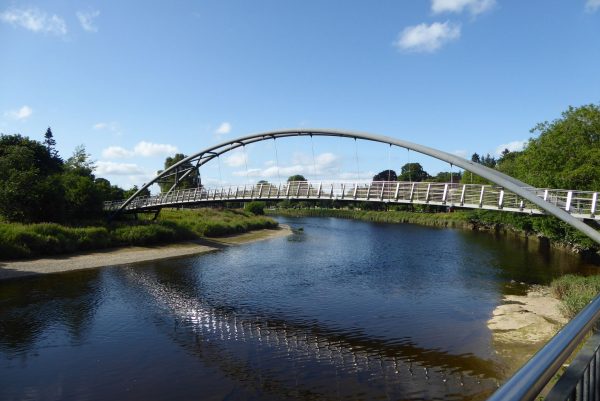 Soon we are passing under Rosefield Mill, being so close we can really appreciate the brickwork on this building. 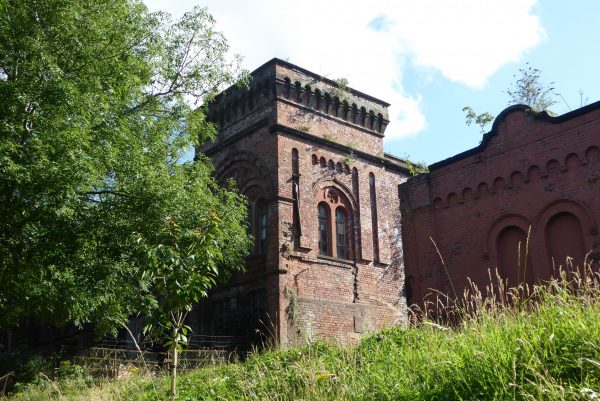 We walk under St Michael’s Bridge towards the town’s pedestrian suspension bridge built in 1875 it is a cracking bridge. 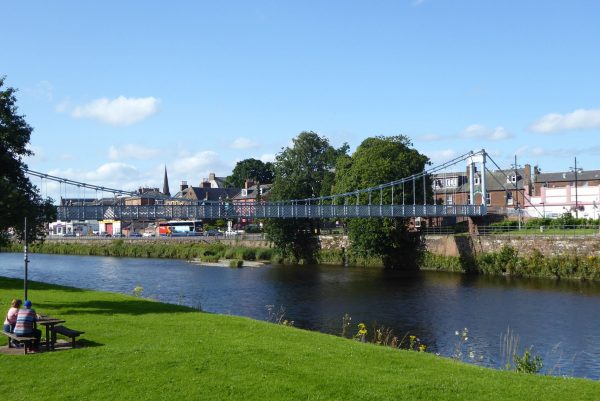 After passing the suspension bridge we continue along the lane by the river, there is an attractive row of houses.  Apparently, the actor John Laurie (1897-1980) lived in this row at number 1 Kenmure Terrace.  Laurie spent much of his career as a Shakespearean actor but found popular notoriety as the dour Scots undertaker Private Frazer.

Frazer was apt to remind Captain Mainwaring that “We’re doomed, Captain Mainwaring, we’re doomed”.  Unfortunately, I am starting to feel that these are apt words in a world where nuclear war can be wielded at the push of the finger of a madman.  Take your pick of who you think is the madman; there seem to be a number of contenders.

Whilst John Laurie was a famous resident of Dumfries he is well and truly trumped by Robert Burns (1759-1796) who lived the later stages of his brief life in the town.  So for the next hour or so we are following a Burns trail around the town.  The first stop for us is the Robert Burns Centre, it is closed, but I would rather look at the building.  This fine old mill was designed by the engineer Thomas Smeaton. 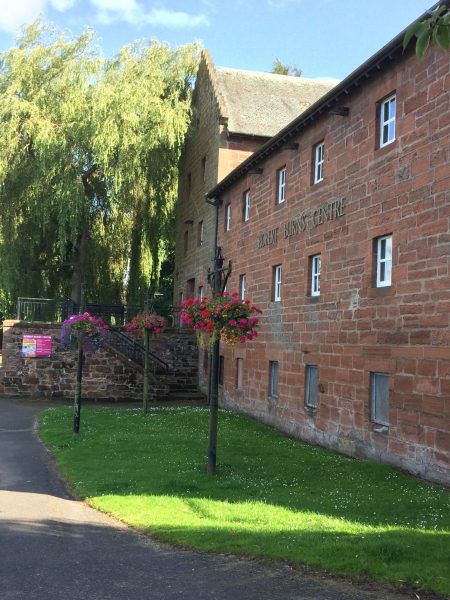 We now turn right to cross the Devorgilla Bridge, built in 1431 it was severely damaged in floods in 1621 causing sections to be rebuilt, the parapets were replaced in 1725.  The original, wooden bridge that stood here was built in 1270 by Lady Devorgilla, I wrote about her a few days ago as the founder of Sweetheart Abbey, but her other claim to fame is the founding of Balliol College, Oxford.  Her son John Balliol, became King of Scotland in 1292. 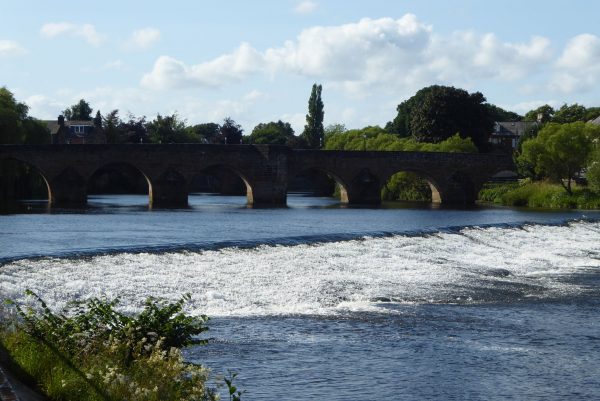 Further up the river is the New Bridge, this one was built in 1794 so new is a relative term. 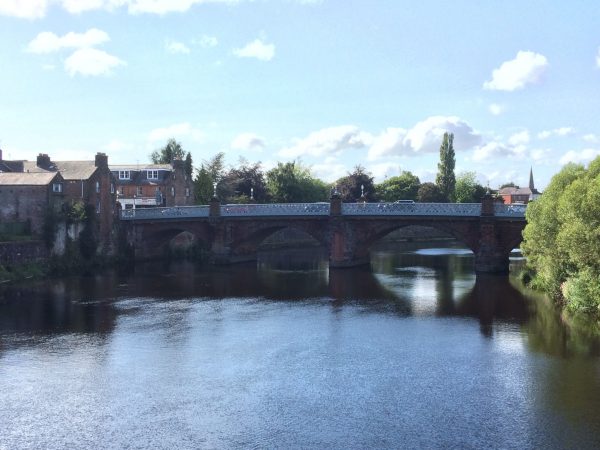 We cross the road and head up a narrow street called Friars Vennel; this leads us to a square with a statue of Robert Burns. 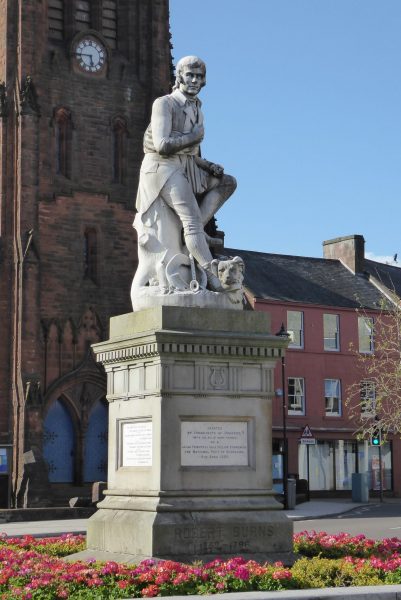 We head down the pedestrianised High Street to reach the Queensberry Monument which bears the inscription “This column, sacred to the memory of Charles Duke of Queensberry and Dover, was erected by the county of Dumfries, as a monument of their veneration for the character of that illustrious nobleman, whose exalted virtues rendered him the ornament of society, and whose numerous acts of public benefice and private charity endeared him to his country, OB.22nd Oct. 1788”.  A pretty glowing tribute! 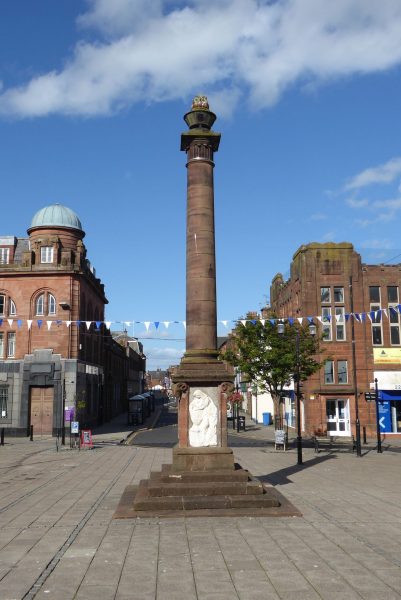 There are so many stunning buildings here that we could spend hours just looking at them. As we continue down the High Street we reach Midsteeple.  Built in 1707 this building was used as a prison, Council House and Clerks Chamber for storing the town’s records.  In 1796 Robert Burns lay in state in the courtroom of this building.  In the 1970’s there were plans to demolish the steeple because it was leaning, but fortunately a local campaign ensured it was repaired and saved for future generations to admire.  The building is now used as an events venue. 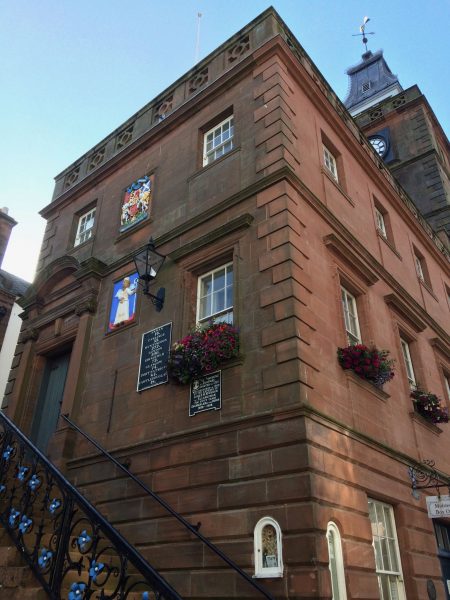 Further on along the road is a very ornate water fountain dedicated to Queen Victoria. 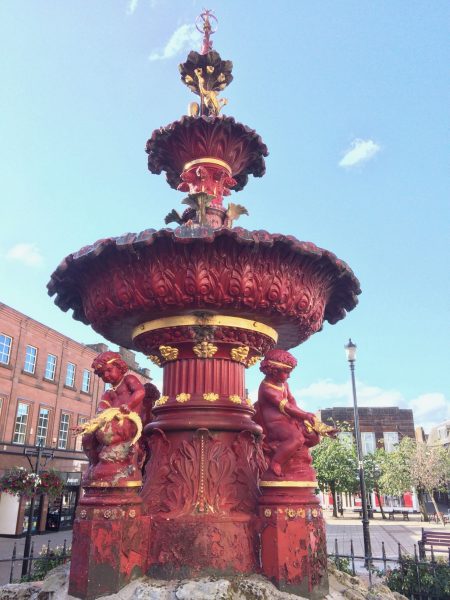 Then the entrance to the Globe Inn, apparently this was Burns’ favourite Howff (inn or meeting place), although it is reported that he frequented many inns throughout the town. 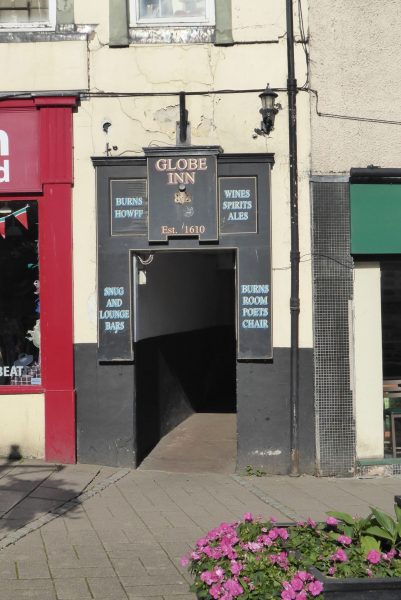 Next we pop up to look at the statue of Jean Armour (1765-1834) wife of Robert Burns.  They had an interesting relationship, in which she had two sets of twins with Burns before their marriage, apparently her father disapproved of Burns and at one point evicted his daughter from his home.  However, he relented when Burns became recognised for his writing and agreed to their marriage.  They married in 1786, with the parish records recording that they were “irregularly married some years ago”.  They had a further five children, of which three survived into adulthood, the last child was born on the day of Burns’ funeral.  She was widowed for 38 years and on her death buried alongside Burns in St Michael’s Kirk graveyard.  Burns obviously charmed the ladies having fathered three other illegitimate children.

Now it’s time to pop across the road to St Michael’s Kirk.  This graveyard is packed with Burns’ friends.  When Burns died in 1796 of rheumatic fever, aged 37, he was buried in a corner of the graveyard. Subsequent to his death his works became increasingly revered and following a meeting in the George Inn in 1813 eighteen locals launched a project to build a mausoleum.

One of those at the meeting was Sir Walter Scott.  The appeal for funds soon saw money flowing in from around the UK and overseas and on 19 September 1817 Burns and two of his sons were disinterred and reburied in the mausoleum.

The final stop on our wander around the town is Burns’ old home, alongside which is a garden adorned with red roses.  A plaque bears one of Burns’ poems.

As fair art thou, my bonnie lass,

So deeply in luve am I,

And I will luve thee still, my dear,

I am never too sure about poetry, I have written the odd ditty for Lynnie on occasions.  None of which I will ever share! But I do think this is a cracking bit of prose about love.  With that thought in mind we end our walk and head back to the car (hand in hand)!  Lynnie promptly tells me that I am getting soppy in my old age! 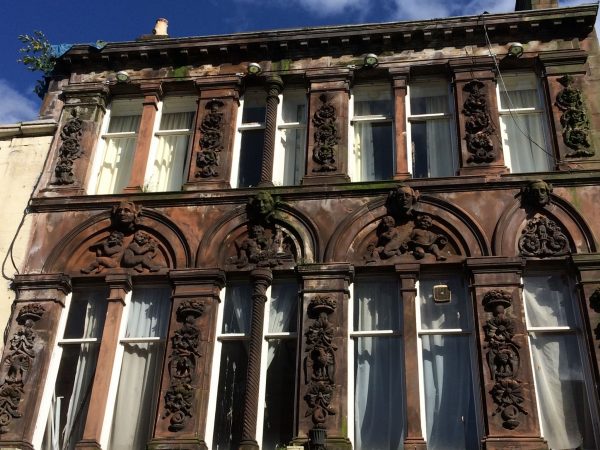 Our afternoon wandering around Dumfries has been fascinating.  It is wonderful town with so many stunning buildings.  Hopefully the local economy will pick up so that it gets a chance to regain its former glory.  We will visit here again, there is so much to see and we have only scratched the surface.