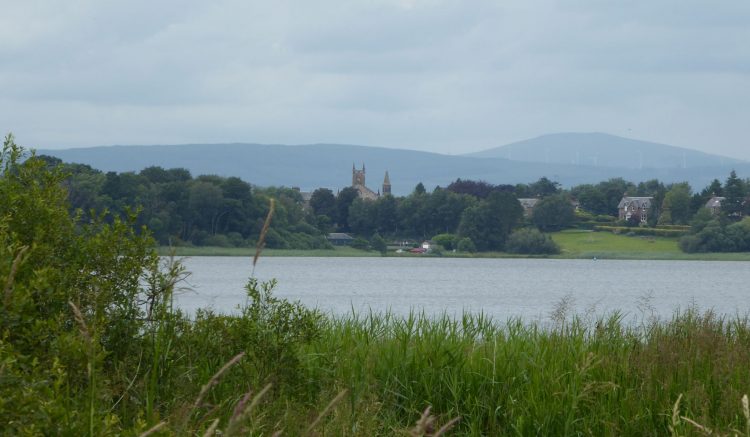 After our leisurely day yesterday we need to get out and explore a bit more of the area.  Sometimes when we plan our walk it is just a case of looking at the map and deciding that the name of a place sounds interesting.  Today it is Lochmaben that catches the eye, there are lochs to walk around and a castle to take in.  So it looks like the ideal spot for a jamabout.

The starting point for our walk is the small car park besides the A709 on the northeast edge of Castle Loch. We take an anti-clockwise route around the loch; initially the path runs close to the main road but is soon in woodland. 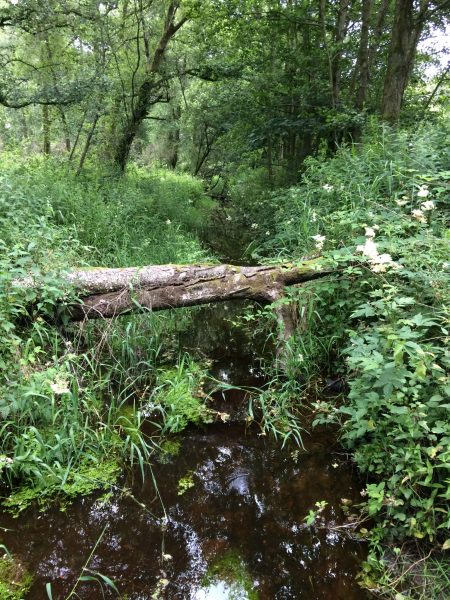 The path is well signed and soon we are out of the trees and enjoying the wild flowers along the edge of marshy land. 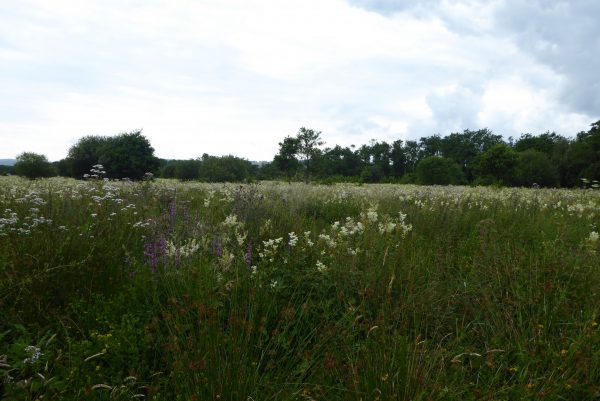 Following the way-markers we cross Valison Burn on a footbridge before continuing on raised platforms above the marshland.  We take a walkway on the right to a bird hide, what a great place to stop and view the lake.  Unfortunately, some mindless bastards have decided that rather than look at the wildlife they would destroy the seating.  These were sturdy benches that would have taken some effort to vandalise.  To get here they must have walked through the wonderful wetlands, sometimes I despair at what people think is acceptable. 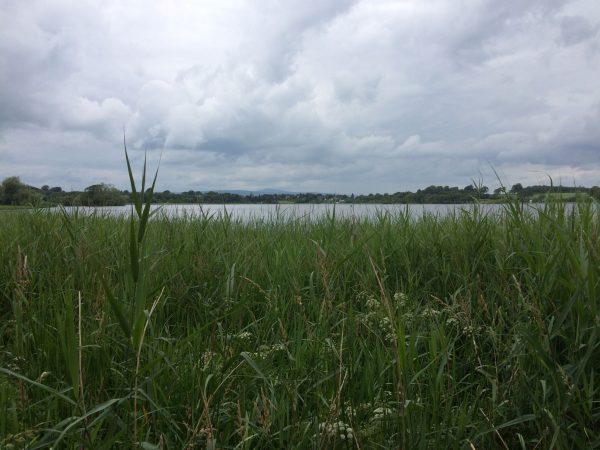 After returning along the walkway to the main track we turn right continuing our circuit of the Loch.  Soon we arrive at the ruins of Lochmaben Castle. This is the second castle that has been built on this Loch, the original wooden fort was captured by Edward I in 1298 and he soon set about establishing a more solid defence.

Work must have progressed at pace because it withstood an attack from Robert the Bruce in 1299 and was then completed in the early 1300’s.  Like may castles in these regions this one changed hands between the Scots and the English on numerous occasions over the next three hundred years. The final action was in 1588 when it was besieged and captured by James VI. 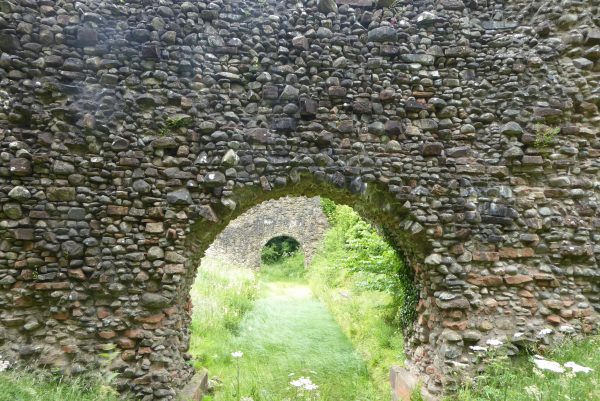 Following the Union of the Crowns in 1603 it fell into disrepair and the facing stones were stripped to build the nearby town.  Without the facing stone the castle looks very different than in it’s heyday, but it does provide a great opportunity to look at the way it was constructed and appreciate the depth of the walls.  Unfortunately, sections of the castle are now closed to the public because they are in such a poor state of repair, but the information boards provide an insight into the past. 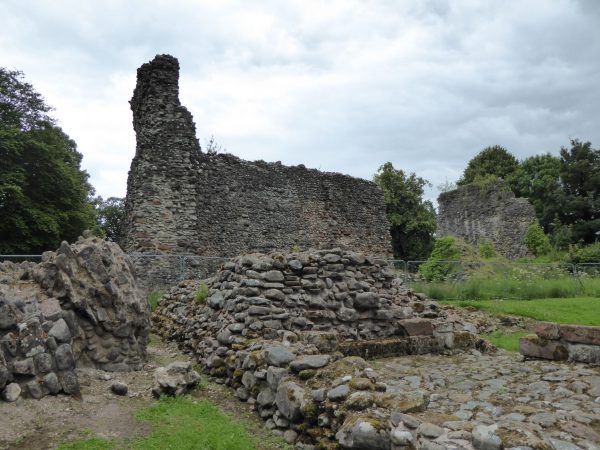 Continuing our walk we return along the entrance track to the castle and head towards Castle Mains, the track soon turns to the right away from the farm buildings and then as we approach a road we take the way-marker on the right to head into woodland.

Suddenly there is a heavy shower and we are digging around in the rucksack for jackets. It is pleasant walking through the woodland, as soon as the rain stops the sun comes out and we are shedding clothing again.  Meanwhile Lynnie spots some interesting wood carvings. 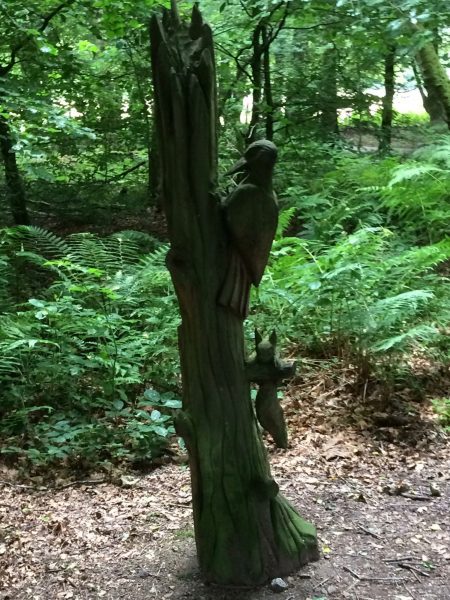 At a footpath sign on the left we leave the Loch side path and then turn right along the road soon taking a footpath on the left heading slightly uphill towards the farm at Castlehill.  After passing the houses we take a path on the left alongside the golf course.  I am amazed at how few people we have seen on the numerous courses we have walked past in Scotland.  I wonder how they can afford to maintain so many courses that appear hardly used. 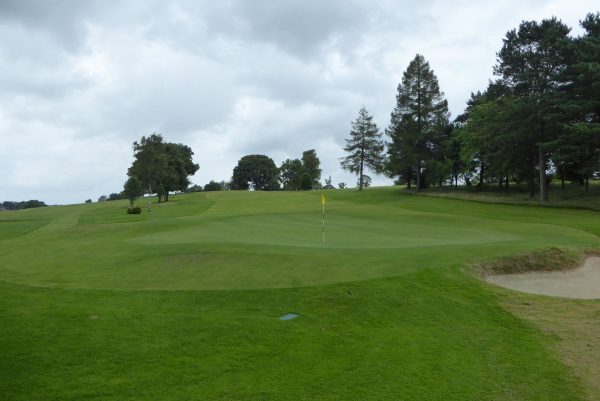 The path continues alongside the cemetery and on reaching a tarmac lane we turn right and within half a mile turn right again to head towards Lochmaben.  On reaching the A709 we turn left and walk along the pavement.  I know we need to turn right along a lane and as we are busy talking naturally take the first right into a relatively new housing development with the Community Hospital at the entrance.  There are some very well maintained gardens on this estate and Lynnie goes into judging mode.  Then we realise that it is a dead end and will not lead to the footpath we want to join.

After retracing our steps to the A709 we turn right and take the next lane on the right to pass the farm at Maxwell Bank.  At the end we turn right along a lane that enters a field.  Within a few yards we spot a herd of bears with young calves.  Just a few days ago I was reading about someone being trampled by bears and we decide to seek an alternative route rather than walk through the middle of this lot with the dogs.

We walk back past some cottages and ignoring the tarmac lane we have just walked along keep going along a track.  Within a few hundred yards we turn left and carry on along the track to a minor road where we turn left and soon left again to pick up the A709.  From here we follow the pavement into Lochmaben.

As we walk into the town we pass the 16th century Mercat (Market) Cross, this originally stood in front of the Town Hall but was moved to this site to allow a statue of Robert the Bruce to be erected. 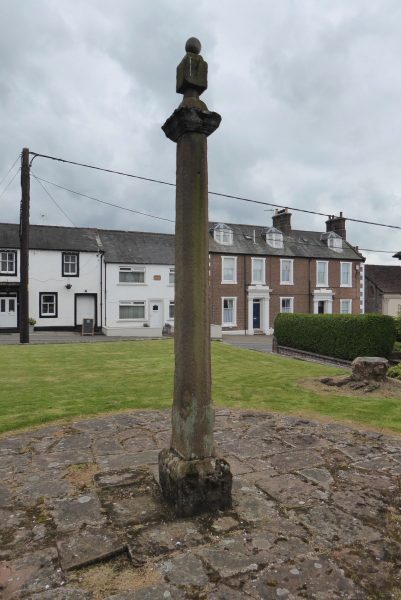 Rounding the corner we come to the fine Town Hall.  The present building dates from 1877 when alterations encompassed the original building of 1723.  The 1723 building included a Tollbooth with a shop underneath, a courthouse, two cells and the Town Hall, a steeple was added to the Town Hall in 1741. 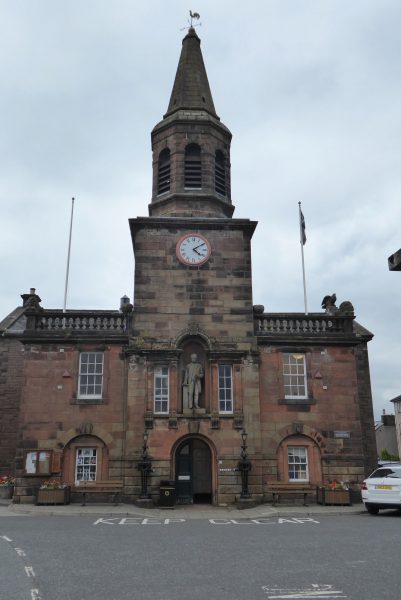 In the alcove above the main entrance is a statue of Rev William Graham; he was a local historian who wrote a history of the town in 1865 he was also instrumental in the enlargement and reconstruction of the building. 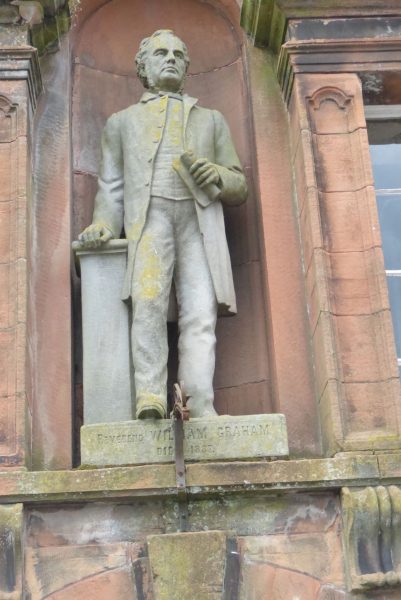 In front of the Town Hall pride of place goes to the statue of Robert the Bruce (1274 – 1329).  He was a local man who reigned as King of Scotland from 1306 to 1329, it would be futile to try and précis his life here, needless to say there is plenty of information out there.

The wide High Street indicates a prosperous past.  In it’s heyday this must have been an impressive town.  At the far end of the High Street is the parish church and close by is the war memorial to the local chaps that lost their lives in World War I.  Last winter I spent some time researching my family history and was reading through the roll of honour for this war.  It is very sobering reading.  This memorial also captures, in a way that is so rarely done, the ages of those that lost their lives most were very young men. 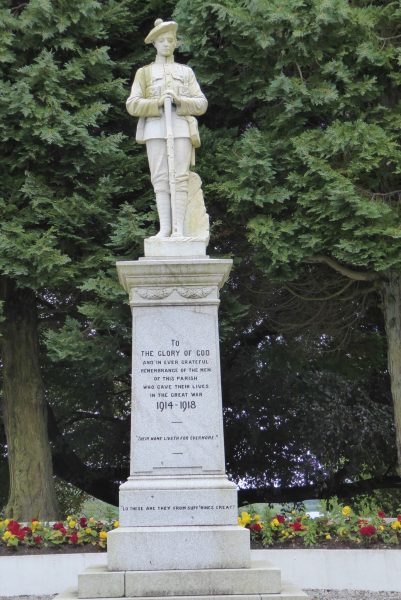 We are in a reflective mood as we take the road to the right and walk down to the edge of the Loch.  It is impossible to imagine what went through the minds of those young men, some hundred years ago, as they looked at this view before only too soon finding themselves in the trenches. 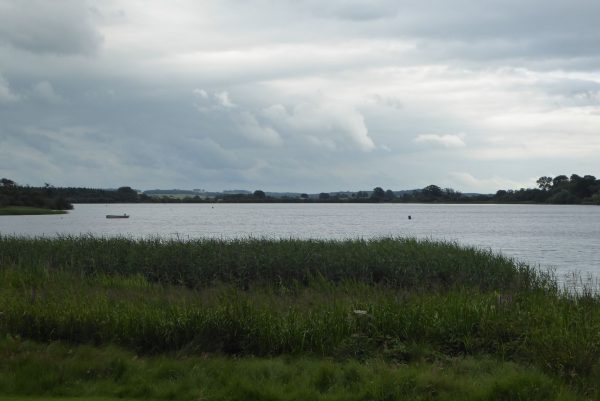 We turn left at the Loch and walk through the sailing club to return to the car park from where we started.  Today we have covered six and a half miles on a walk packed with history.  This is an interesting part of the Country to visit. 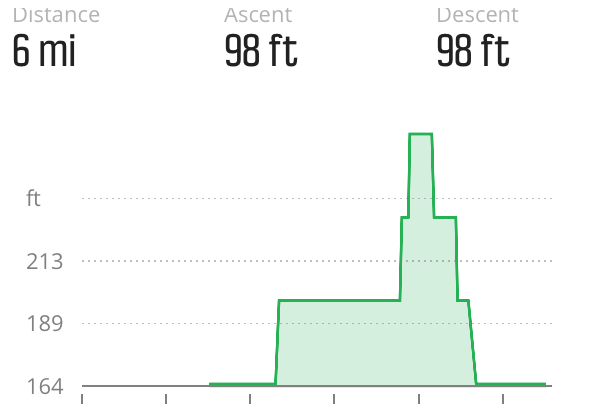