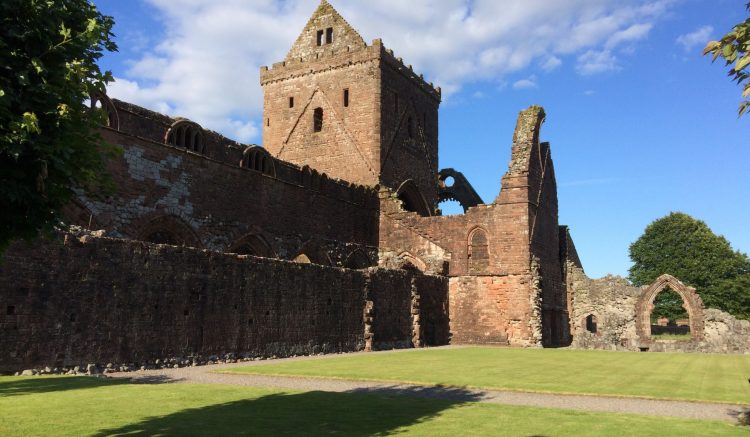 It is a cracking day and we decide to spend some time relaxing around the caravan.  It gives me an opportunity to write some blogs and whilst the sun is shining give the dogs a good wash.

When we are at home they know the signs, as soon as the bucket appears Crosby seeks a secure spot to hide whilst Dexter stands resigned to his fate.  However, today I am using a different bucket and taking Crosby by surprise.  So he is the first to get a soaking.  It is not an easy task but soon he is lying in the sun drying off watching Dexter casually take his turn.  Afterwards I could do with a lie in the sun to dry off too!

Sitting in the sun and chatting to neighbouring caravaners is relaxing but we do need to go out for a walk, even if only for an hour.  After our trip to Gatehouse of Fleet yesterday I am not keen on driving far, so a mooch from the site into New Abbey fits the bill.

By now the route to the village is very familiar, we head down the lane and cross the stream on the bridge by the ford and then follow the footpath as it enters the village through Sweetheart Abbey churchyard. 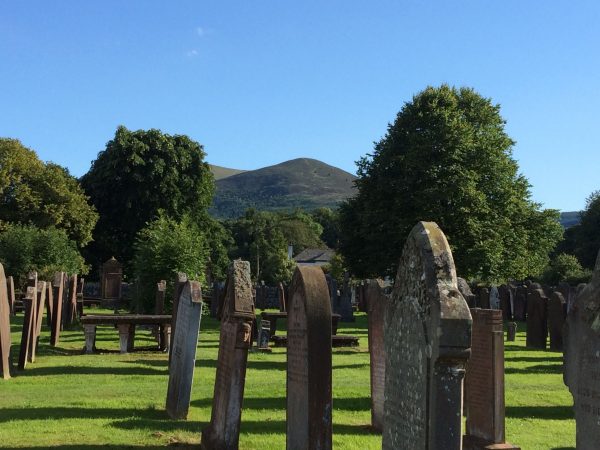 Although this abbey is known as Sweetheart Abbey it’s real name is the Abbey of Dulce Cor.  The site is run by Historic Scotland and their website is a useful source of information.  When, in 1268, Lord John Balliol died his grieving widow, Lady Dervorgilla of Galloway, had his embalmed heart placed in an ivory casket. She is said to have carried it with her everywhere.

In 1273 Lady Dervorgilla founded the Cistercian abbey of Dulce Cor (Latin for ‘Sweet Heart’).   Monks from Dundrennan Abbey established the new monastery, hence the name of the village, New Abbey, it was the last Cistercian Monastery to be founded in Scotland.

When Lady Dervorgilla died in 1289, she was buried in front of the abbey church’s high altar, clutching her husband’s heart to her bosom.

The building of the Abbey was disrupted by the Wars of Independence and Edward I based himself there in 1300, while campaigning in Galloway. Later during the 1300’s Archibald the Grim, Lord of Galloway paid for rebuilding work.  Like other abbeys across Britain this one fell victim to the Protestant Reformation of 1560 and has lain in ruins ever since.

There are numerous grand headstones in the graveyard, some of which give you a full breakdown of the family tree.  I have not previously seen this and it is interesting to wander around.  You can soon establish which families were prosperous and also when tragedy struck  families and the community with outbreaks of illness. 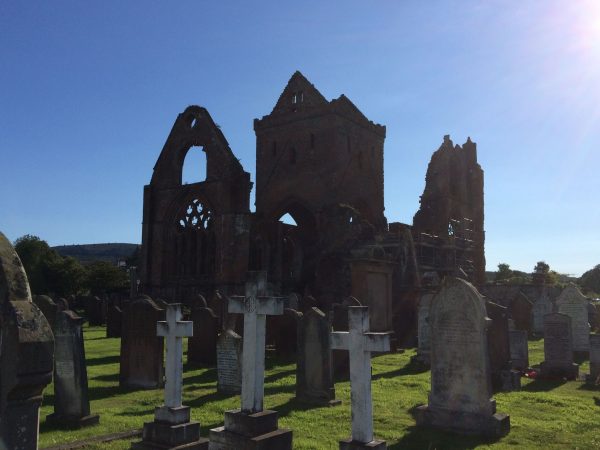 There is an unmarked grave located somewhere in the churchyard marking the spot where William Patterson was buried in 1719.  I was not previously aware of Paterson but he was an interesting character.  Born locally in 1658 he travelled to the Bahamas where he conceived the idea of setting up a trading colony on the Isthmus of Panama, his initial attempts to fund the scheme were thwarted so he parked his idea and focussed on other activities which included being one of the founders of the Bank of England in 1694.

Patterson remained convinced that establishing a Scottish Colony in Panama on Darien Bay would enable the Scots to be key players in international trade.  It would be the key link between the Atlantic and Pacific and as such of strategic importance.  In 1695 the Bank of Scotland was established and soon after the Company of Scotland which aimed to raise subscriptions to trade with “Africa and the Indies”.

King William II of England (William III of Scotland) was not keen on the idea.  There was already the East India Company and creating a colony in the region might upset his Spanish allies at a time when he was at war with the French.  So Patterson went about raising funds from his fellow Scots.

It is said that a fifth of the wealth of Scotland was invested in the scheme.  In 1698 an expedition of five boats and 1200 people set off on the arduous journey across the Atlantic via Madeira.  After a stop at the West Indies they landed at Darien Bay and declared it should be known as Caledonia.  Quickly they built a fort, Fort St Andrews, but this had no fresh water supply (obviously a bit of an issue) and it soon became evident that the natural harbour was hazardous to shipping with several being wrecked.

Then malaria struck and just eight months after landing it was decided to abandon the colony.  With so many sick it was a difficult journey and only 300 of the original 1200 were alive when the ship docked in New York.  Unfortunately just a few weeks earlier two ships had been sent to re-supply the colony.  So a second expedition was arranged to try and re-establish the colony, this landed in November 1699 with 2,500 people.  The colony was still beset with sickness and to make matters worse the Spanish had taken umbrage and decided to besiege the fort.  Eventually the few hundred survivors were allowed to leave.

Clearly the loss of so many lives was a tragedy, but the financial impact on Scotland was disastrous.  With so much of the countries wealth invested in the scheme it soon became clear that survival necessitated union with England.  At the time of the Union agreement it was decided that a Scottish Shilling would be worth one English penny, consequently many in Scotland became bankrupt.

It is a sobering thought that we live today with the consequences of the ill-conceived plan of Patterson’s.  Needless to say Lynnie and I continue our stroll discussing how even now we allow Bankers to act with impunity when they lead the Country to financial ruin.   To calm down Lynnie occupies herself with taking pictures of bees. 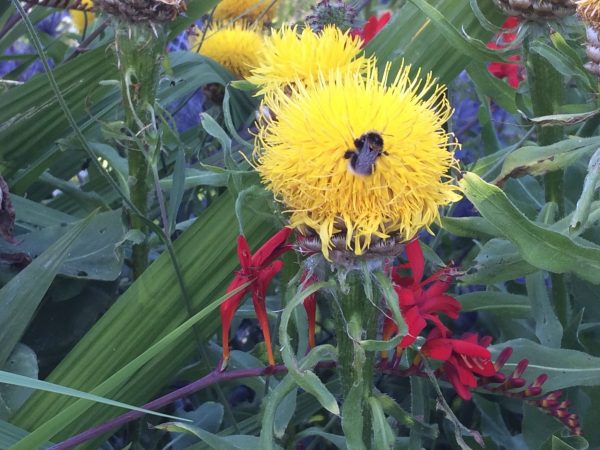 We wander around New Abbey and Lynnie pops into the Abbey Tea Room to seek out gifts for friends and sees so many options that she decides she needs to come back later in the week.  I hope this means we will have done our Christmas shopping for the year!

We then head back towards Landis Farm CL via the playing field.  There is a football match going on.  It looks like a pre-season friendly.  It is not too long before the opening fixtures, always a worrying sign that the seasons are changing.  We best make the most of the sunshine before the gloom of winter is upon us!