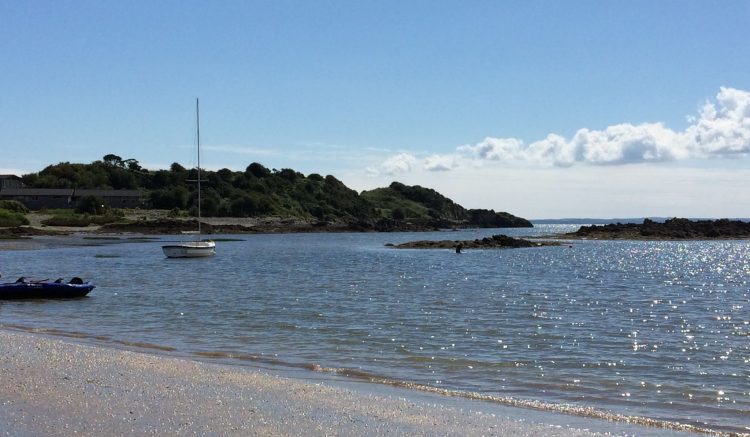 After yesterday’s trip up Criffel we are looking for a more level walk that we hope to combine with a trip to a beach so that Dexter and Crosby can have a run around and paddle. This is a new part of the world for us to explore. Usually I am not keen on driving far for a walk, but if we can combine it with getting to know the area that’s fine. So, we decide to take the scenic route to Gatehouse of Fleet.

We park close to the Tourist Information centre in the middle of Gatehouse of Fleet. Our walk starts from the rear of the car park by heading towards the edge of the Water of Fleet on a path towards Garries Wood. Before the entrance to the woods there is an interesting wooden sculpture. 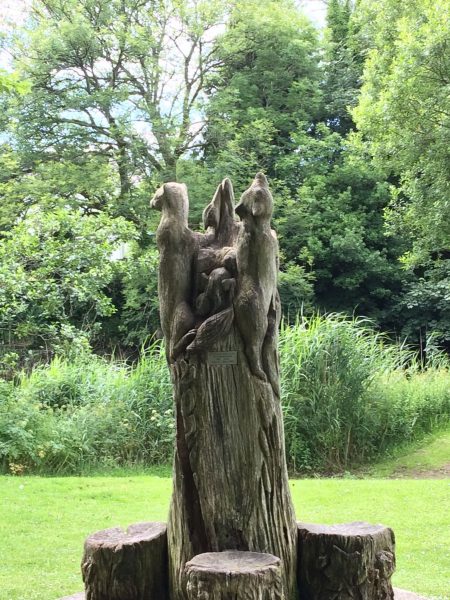 The path is clear through the woods and we are soon at the ruins of Cally School. The information board explains that in 1816 Lady Anne Bingham married a chap called Alexander Murray and the couple set up home in Cally. Soon after Lady Anne established a school, The Lady Anne Murray Charity School, to provide education to girls of the surrounding area. On the death of her husband in 1845 Lady Anne left the estate and it passed to Horatio Murray Stewart and he continued to support the charity school. Later the girls’ school amalgamated with the Cally Boys’ School and in 1933 the Forestry Commission purchased the site and the school building became a store. 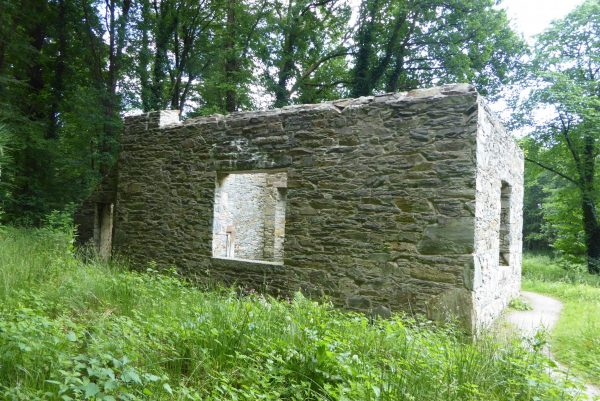 Following the pathway we soon emerge on the edge of Cally Golf Course and then follow the track as it crosses the course towards Cally Palace Hotel (formerly Cally House). 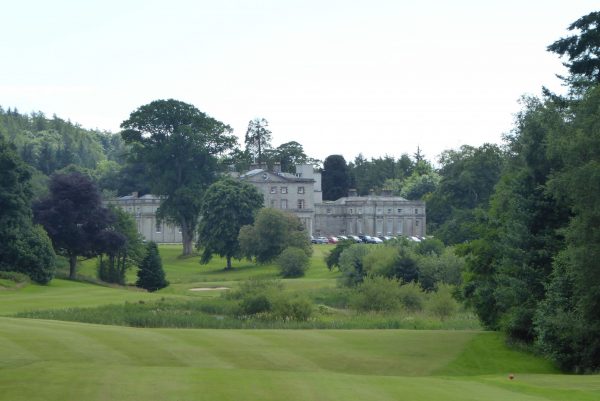 We soon arrive in front of this fine house built in 1763 by James Murray. Generations of the family lived here until the estate was sold to the Forestry Commission, who promptly sold the house and surrounding land, which was converted into a hotel opening in 1934. During World War II it was used as a residential school for evacuees from Glasgow and then after the war reopened as a hotel. 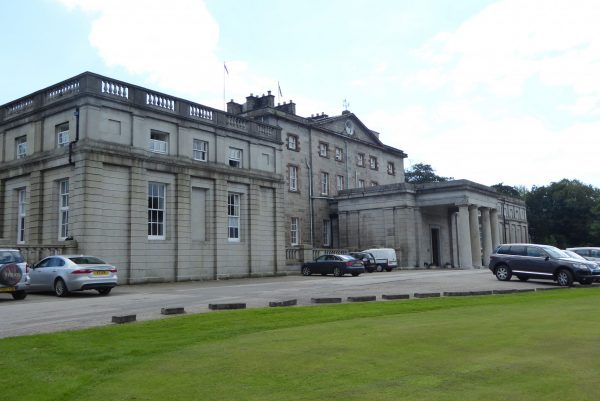 We pass in front of the house and the road soon becomes a track heading into the woods, passing under the A75 and then arriving at Laundry Cottage, that was once the laundry for the main house. 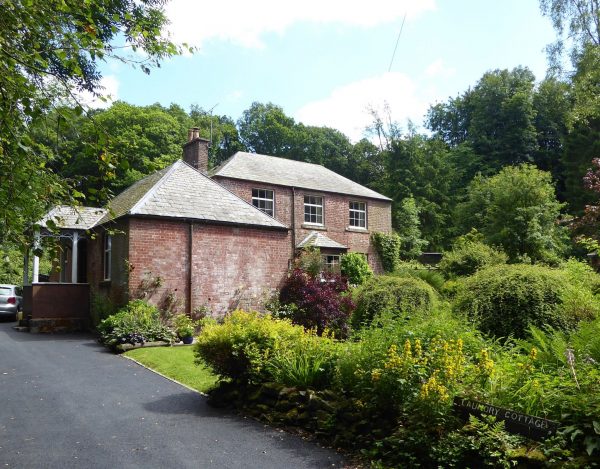 Now the route continues along the track through Laundry Woods towards Cally Mains where we pass barns and then continue on a tarmac track on the left of the farmhouse. The tarmac peters out as the track enters Cally Mains Wood.

Ignoring minor tracks to the left and right we then go straight ahead when the main track turns left. The route is now just inside the woodland and there are fine views to our right over the Fleet Estuary. 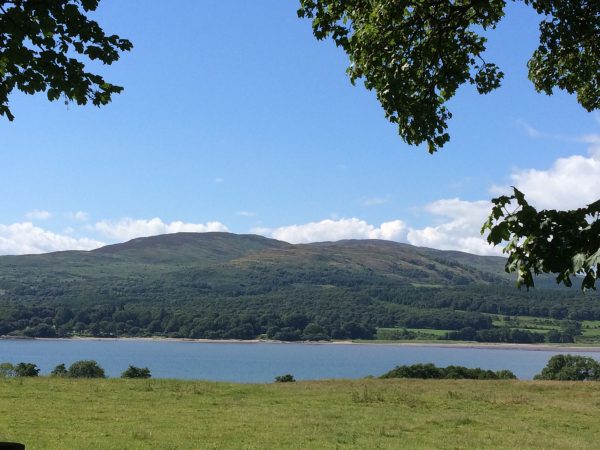 After going through a gate there are fields on either side of the track as it heads towards Sandgreen static Caravan Park. We take a right fork in the park and at a five-way junction bear slightly right on a track towards the sea. The boys are pulling on their leads as they sniff the sea air. As the track bends to the right we go through an iron barrier and walk onto the beach and turn left. 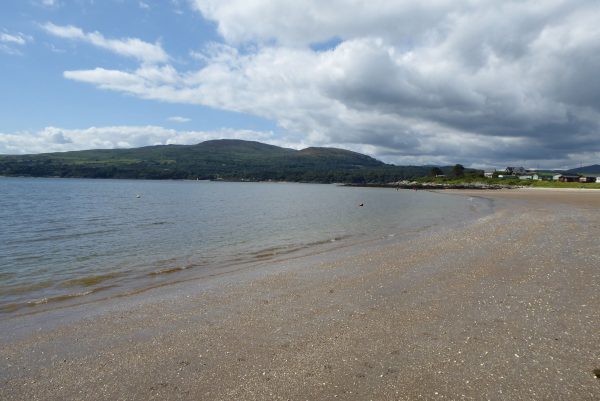 It is not long before the boys are chasing tennis balls on the sand. 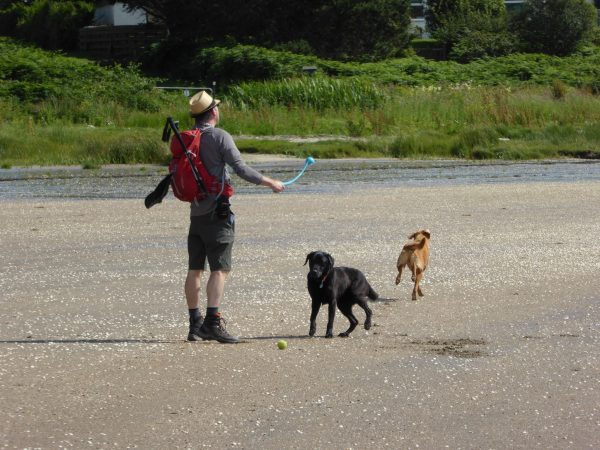 Needless to say it does not take Crosby too long to venture into the water. 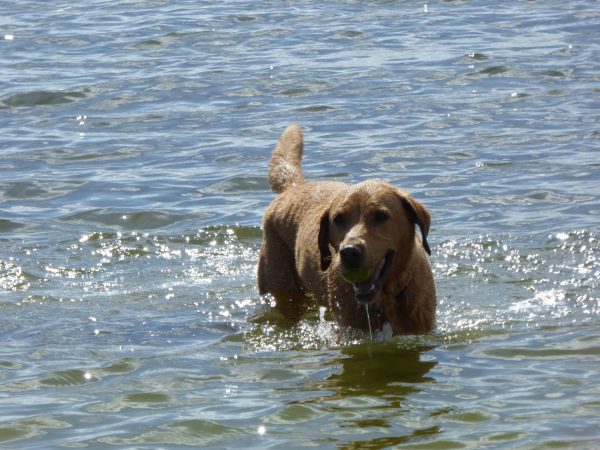 This is a very, pleasant spot on a sunny afternoon, with the dogs enjoying themselves we are in no hurry to leave. 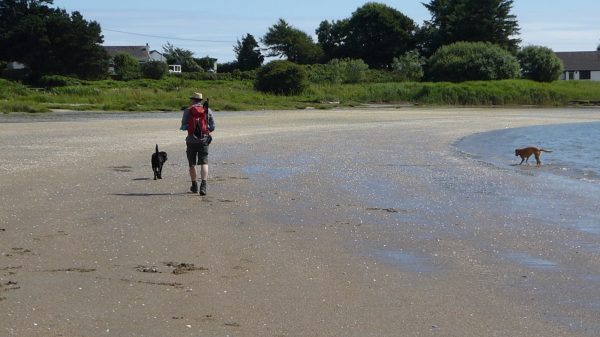 Eventually we resume our walk; leaving by the track at the end of White Bay beach leading to the edge of the caravan park before joining a road. Now we keep straight on along this road, it is very quiet and the views are good. 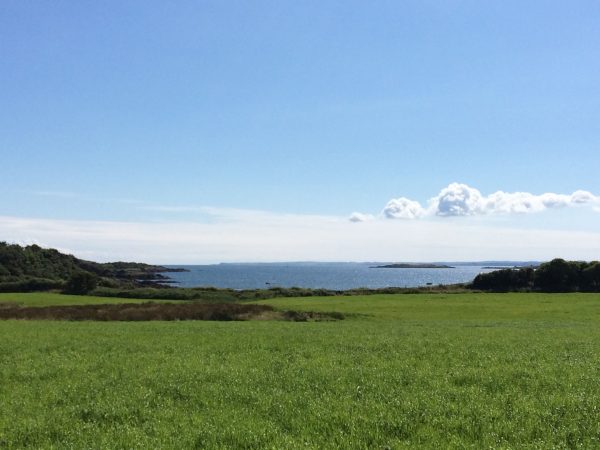 After yesterdays boggy walk up Criffel it is a relief to be walking on tarmac, we stay on this road for three miles making good speed until Lynnie spots a big bully bear staring at her and decides to take his picture. 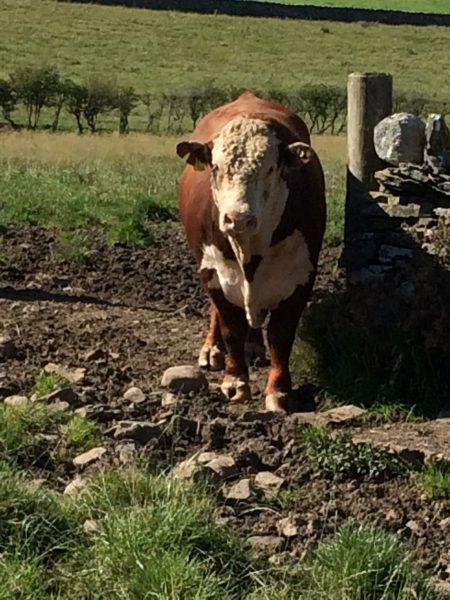 As we approach the A75 we follow the National Cycle Route 7 on our left and cross a bridge to follow the track into the woods. This is a clear track, which we follow until reaching a telegraph pole. Here the cycle route heads to the left, but we turn right on a smaller footpath through the trees. Soon we reach a Gothic Folly just off the footpath on our left.

The information board explains that originally this folly, now surrounded by trees, looked out over the Cally Estate parkland. The folly is known as the Temple and reportedly a chap called William Todd who looked after the estate’s drove cattle once lived here. It is a cracking building. 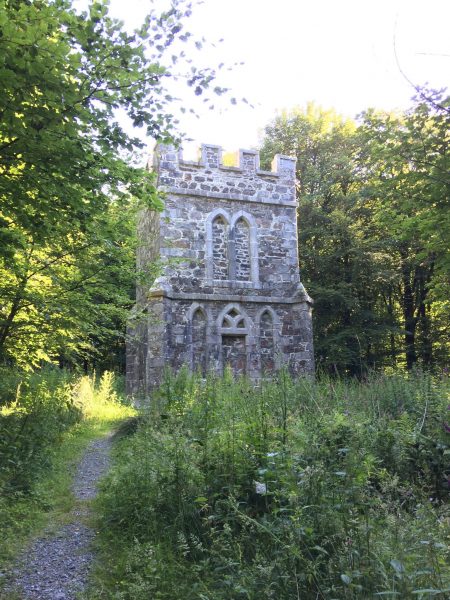 There are a number of attractive old buildings here; clearly in the past this was a prosperous place. At one time it boasted four cotton mills, a brass foundry, a brewery, brickworks and tannery. The impressive clock tower was built in 1871 and has a water fountain and trough donated by Mrs Murray Stewart in 1883. 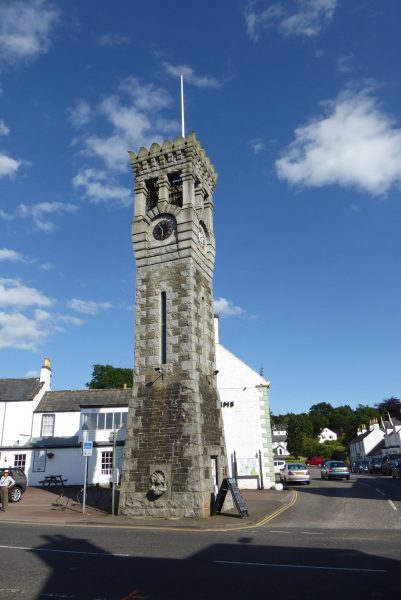 Lynnie decides it is time to sample the local ice cream and having purchased a small tub of Cream O’ Galloway ice cream consumes it in the archway of the fine Town Hall building. 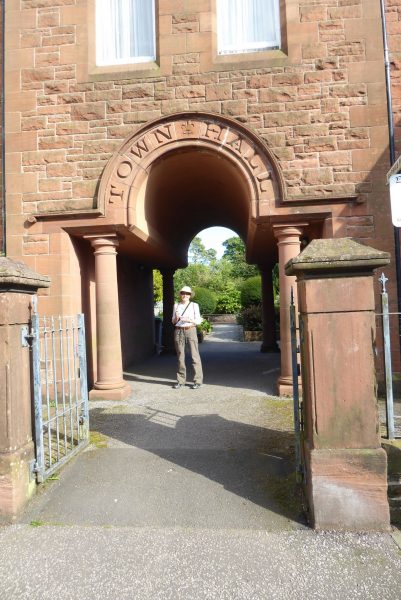 Heading down the main street we visit the Mill on the Fleet. The cotton mill was built in 1788 and powered by the waterwheel on the gable end. With the advent of steam driven mills the local cotton industry declined and the mill ceased operation in 1850. Part of it was then used as a store for bark used in the local tanning industry and part of it used as a space for making wooden bobbins. It is a fine building and is now open to the public; unfortunately we are too late in the day to pop inside. 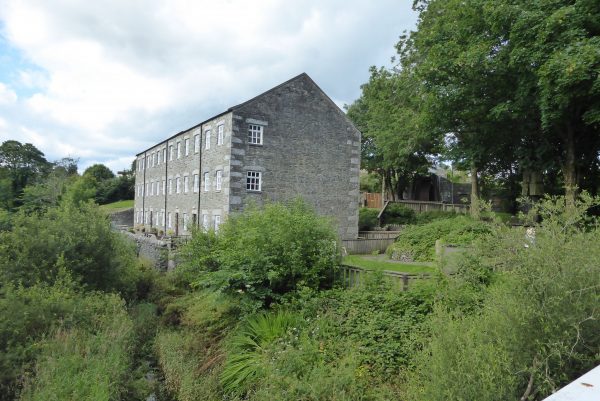 There is an amazing, very large wooden sculpture, known as “The Big Twitcher”, close to the mill it was built by Andy Frost in 1997. 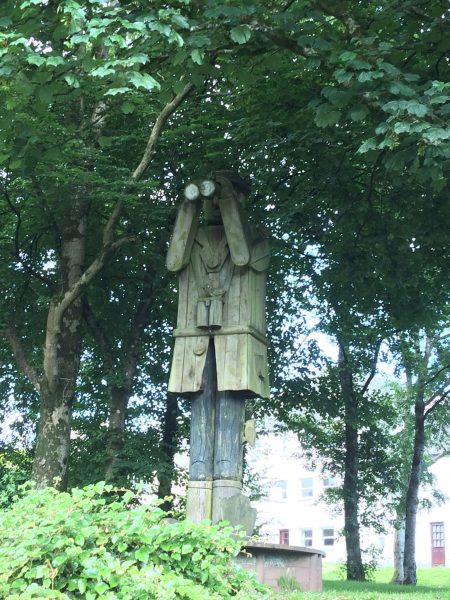 It is time to head back to Landis Farm CL, our walk has covered just over eight miles on a very pleasant summer afternoon in the sunshine.

To see this route on OS Maps Click Here 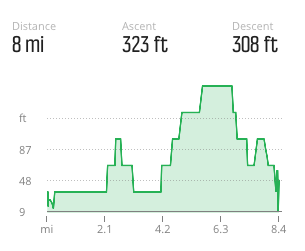