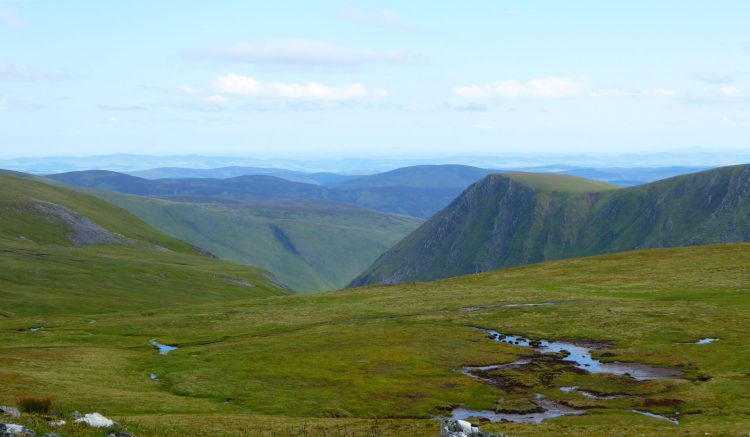 I had thought that today I might be walking on my own and was contemplating a walk up the Schiehallion, but when I was talking to our neighbouring caravanner at Quarryhill CL he mentioned a route on the east of the Glen Shee ski centre that took in a number of Munros.  I mention this to Lynnie, expecting a negative response, however, after “bagging” three Munros yesterday there is no stopping her!

We take the now familiar drive from Blairgowrie up the glen and park at the Glen Shee ski centre. Our walk starts by heading downhill besides the A93, there is plenty of space besides the road so there is no worry about the traffic (and few cars pass us). It seems a bit odd starting a walk, due to head over three peaks, by walking downhill. Lynnie is already starting to have doubts!

After walking for nearly a mile and half besides the road we reach a small parking area on the right. We leave the road here and walk through the car park towards a burn and cross on an old stone bridge, this used to be part of General Wade’s Military Road between Perth and Braemar. 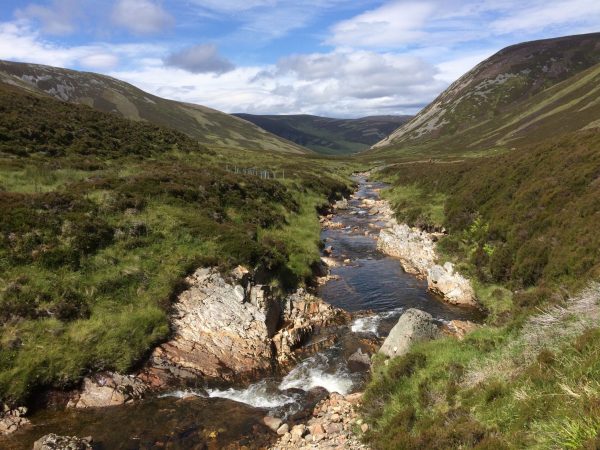 The path roughly traces the burn keeping it to our right, in sections it is slightly boggy and routes have been worn avoiding the worst parts. As we progress through heather the path becomes less clear, but still easy enough to follow. The OS map shows we are passing old shielings. This is not a term we have come across previously; apparently it is Gaelic and describes a shelter built for animals in remote locations. 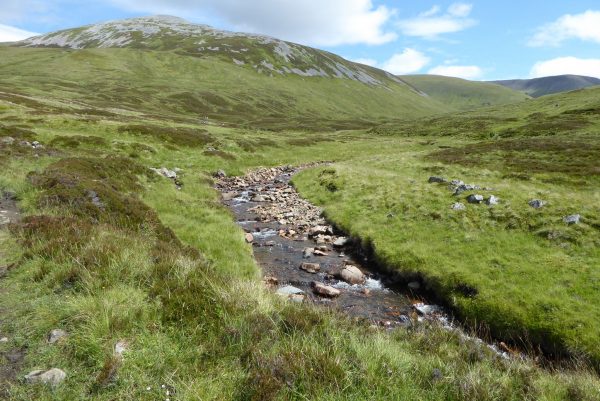 We carry on besides the burn until we reach a second set of shielings. Here a tributary of the burn comes in from the left and after crossing it we continue on an upward path heading for Carn an Tuirc.

It is now a warm and pleasant afternoon and we are sheltered from the wind as we climb. Soon we are shedding layers. After yesterday’s efforts Lynnie is complaining about tired legs, so I think the stops maybe an excuse for some respite. After walking through heather and then a boggy section the path becomes rockier. We notice that the few people who pass us on their way down are all well wrapped up and we are soon exposed once more to the wind as the angle of Dexter‘s ears testify. 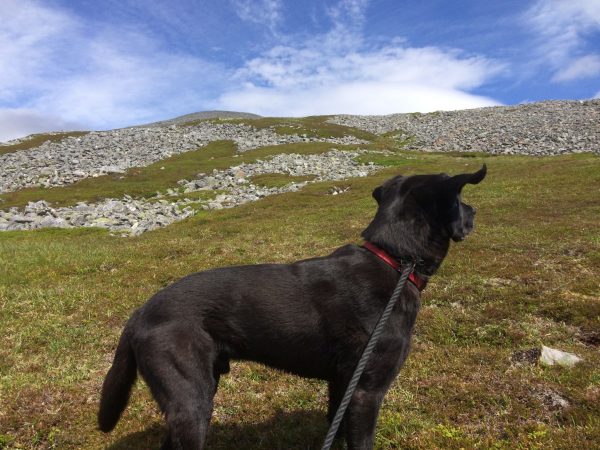 The route becomes increasingly rocky and we take a path that appears to take us across more open ground. However, we soon realise that to reach the summit there is no alternative other than scrabbling across the rocks. This is tough going and we are cautious, the last thing we want up here is to turn an ankle or for a dog to break a leg. 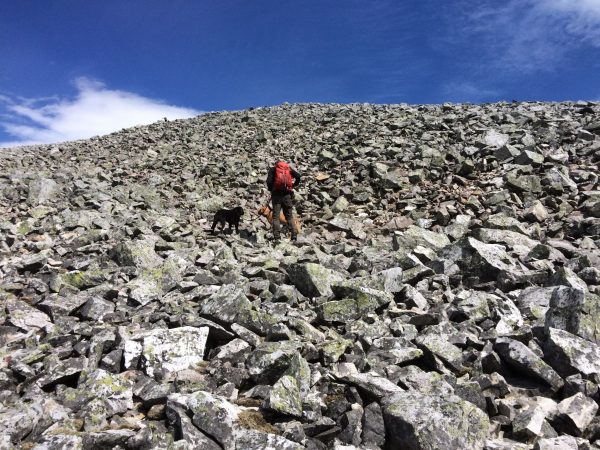 We reach the cairn on the summit of Carn an Tuirc; this is not a place where Lynnie is going to stand on one leg. She says that standing on two wobbly legs is challenging enough! 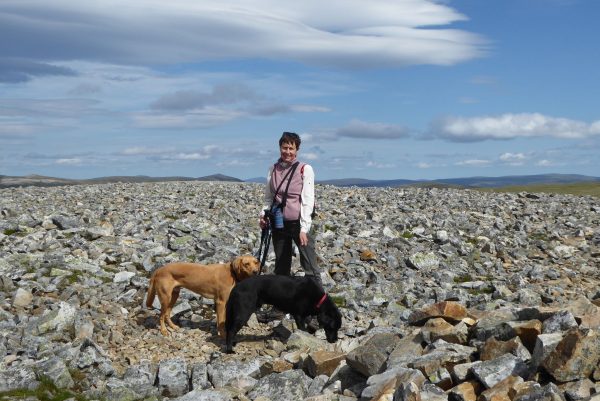 We are 3,343 feet above sea level up here. As you might expect there is a chilly breeze, but the views are outstanding. 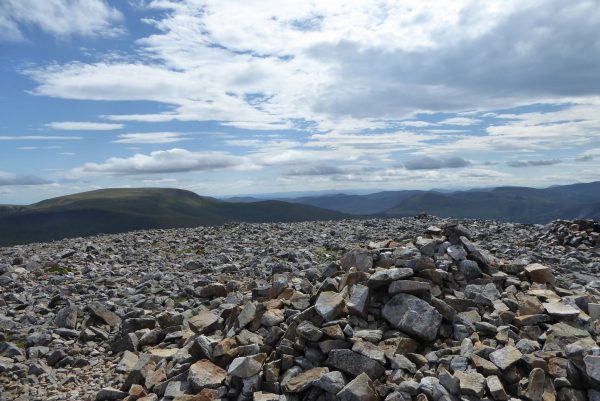 Lynnie points out a very interesting cloud formation that she thinks looks like a spaceship. I am not a believer of extra-terrestrial beings, until it is proved otherwise! 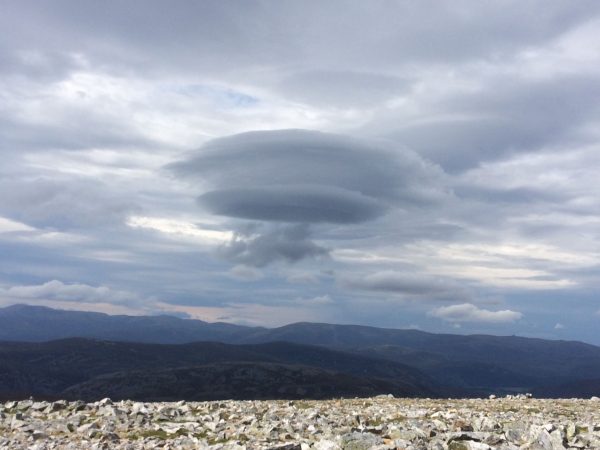 However, there was an occasion almost thirty years ago when I wondered if there were beings from out of space. It was back in the days when we still had a milkman deliver to the door, I was putting the empties out late one Saturday night when I saw strange lights in the sky. I called Lynnie and we watched these lights as they arced across the sky from over the horizon.

Now this was pre-internet days and I needed to check if we were having an alien invasion and my most likely source of knowledge on the subject was my mucker Mazza. I knew he was in the local boozer, he had called in on his way suggesting I join him, but having been on the pop together the night before I (unusually) opted for a night off.

Lynnie, sort of, agreed that I should check out what was going on, so I made a dash for the pub. Strangely the idea of phoning the pub and asking to speak to Mazza’s did not cross my mind – it was pre-mobile phone days. Neither did it occur to me that I might be abandoning my wife and two young children as the end of the world approached. Anyway Mazza, first insisted on buying me a pint and then the bar emptied as we all went to look at the sky.

It took only a few seconds for Mazza to tell me that it was the laser display going on over the hill in Salisbury’s Cathedral Close. Naturally, I called Lynnie to tell her it was safe to come out from under the stairs; but having hot-footed it to the pub (a couple of hundred yards), suffered the shock of imminent alien invasion and then public humiliation it seemed rude not to stay for a couple more! Anytime UFO’s are mentioned Lynnie reminds me of this event and how comforted she is to know that when the end is nigh I will be scarpering to the pub!

Back to our walk. From the summit we head east towards a subsidiary cairn and then go east-south-east descending towards a grassy track.   Here we take a brief diversion to the left to appreciate the view down Coire Loch Kander. It is a real cracker! 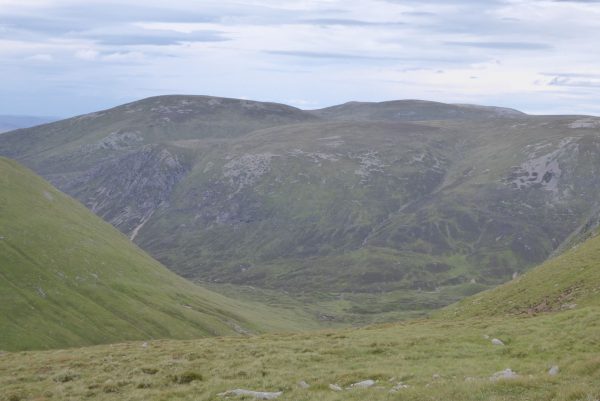 Returning to the grassy track we follow this south-easterly towards Cairn of Claise, on reaching a dry stonewall we follow the line of it (keeping it on our right). The route becomes stonier and almost without realising it we reach the cairn at the summit. 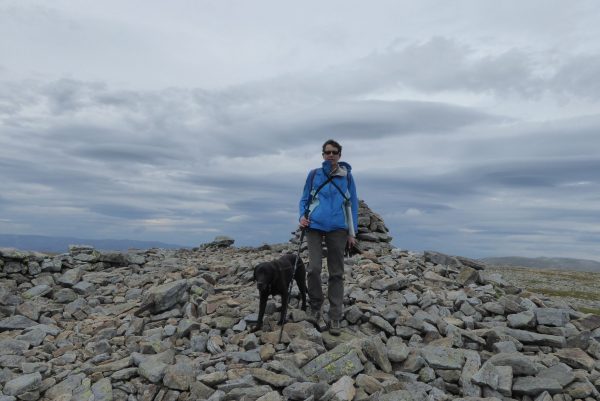 We are now at 3,491 feet. Since the initial descent from Carn an Tuirc it has been a gradual climb and it doesn’t feel like we are on a mountain top. Although the wind is cold enough for me to regret not having gloves in my rucksack. 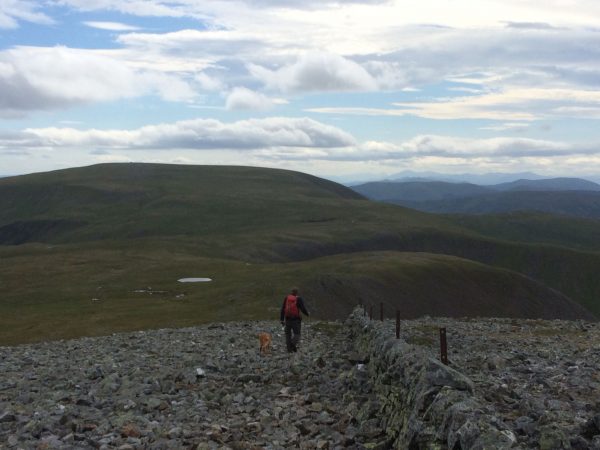 From the summit we continue along the line of the wall veering slightly to the left to pass a lochan, enjoying stunning views down the Caenlochan Glen as we go. 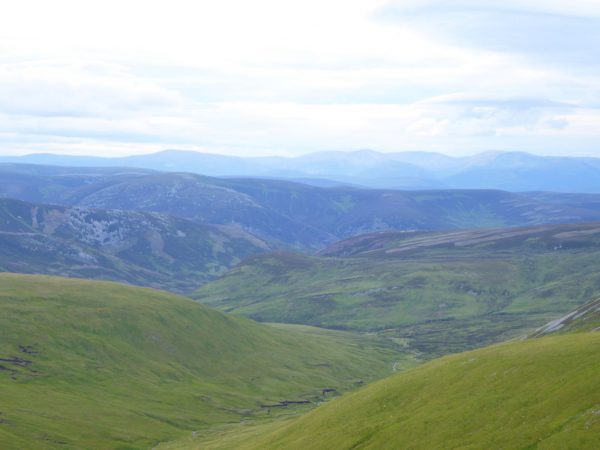 The track is clear as it heads towards the west, then southwest, and finally south to head along the east side of Glas Maol.

We cannot see a clear path to the summit of Glas Maol, but follow a faint track that others have used and soon see the trig point and cairn marking the top.

We are 3,504 feet above sea level; this is the highest peak we have been up in the UK. I think it’s pretty impressive, but Crosby is more interested in seeing if any crumbs have been left around the trig point. 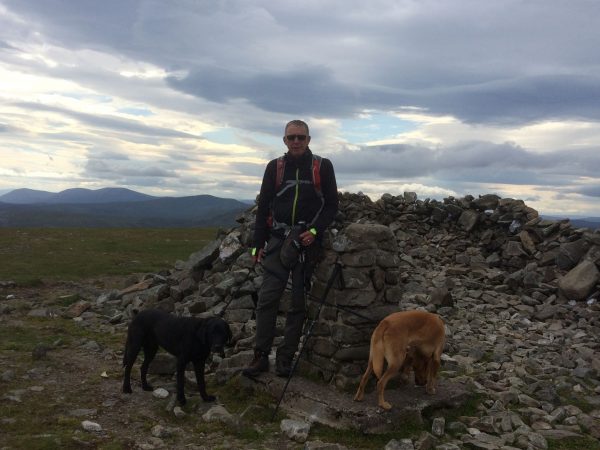 As it’s the last Munro of the day Lynnie decides to celebrate with a one-legged pose. 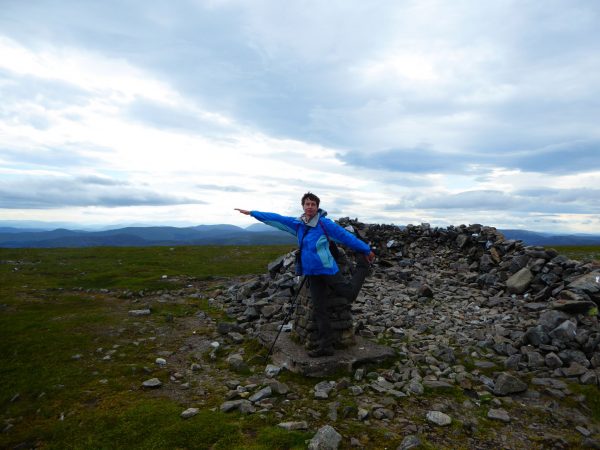 There is an option to carry on along the ridge to bag Creag Leacach, but we both feel it is time to head back down and return to the car. We are moving site tomorrow and don’t want to get back too late this evening. 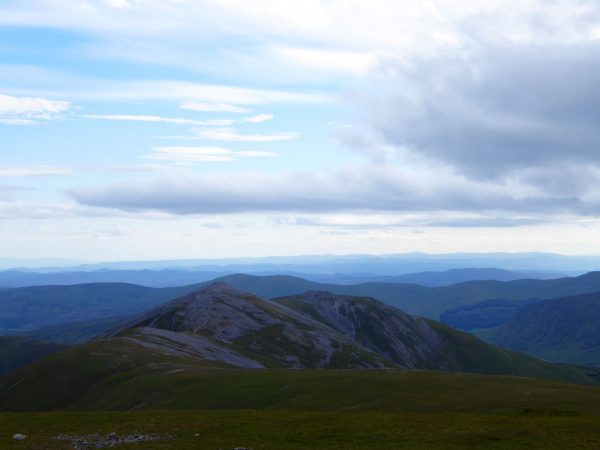 Initially it is difficult to establish which of the paths is the one we want running from the summit, there are several options but we are heading north-easterly to reach a clearer path to the ridge edge before descending very steeply towards Meall Odhar. 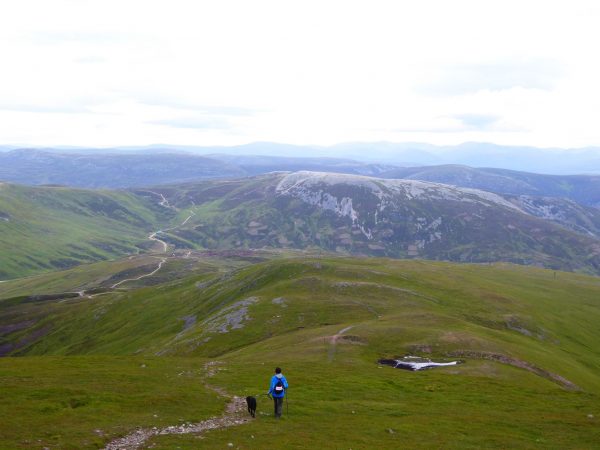 After crossing Meall Odhar we are amongst the tracks for the ski runs and follow these down hill with the Glen Shee ski centre in front of us. These long steep downhill descents play havoc with my knees so I am relieved to get to the bottom. 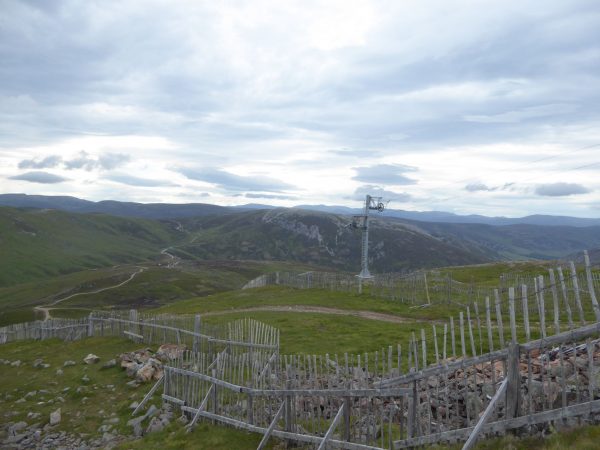 Today’s walk has covered nine and a half miles, it has been a stunning afternoon and has really wetted our appetite for tackling Munros. We have now “bagged” six – only two hundred and seventy-six to go!

As we head back to Quarryhill CL we reflect on our stay in this area and conclude that we could happily spend another couple of weeks here. Despite it being over five hundred miles from home I have a feeling we might be coming back again next year! 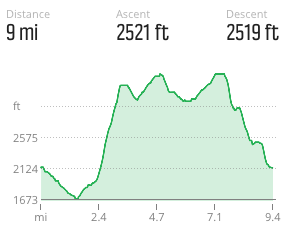