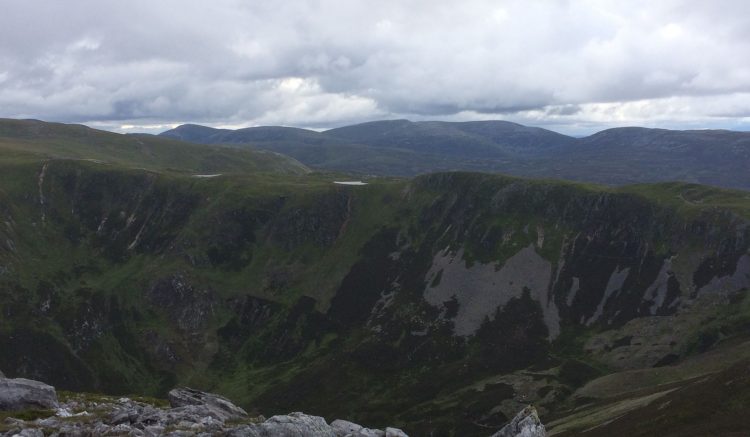 After yesterdays short walk I think it is time for us to climb some hills. It would feel a bit odd to have visited the Highlands and not “bagged” at least one Munro. During my now frequent visits to H.W Irvine’s in Blairgowrie the butcher has suggested that we tackle some of the Munro’s closest to the Glenshee Ski Centre.

We park in the car park by the Centre on the west side of the road and start our walk by heading past the main ski building and then turning left across a gravelled area and heading steeply up a track by a ski lift. We head towards the octagonal cafe building and continue on the main track between two ski lifts. We are heading for Carn Aosda and this is a serious bit of up! 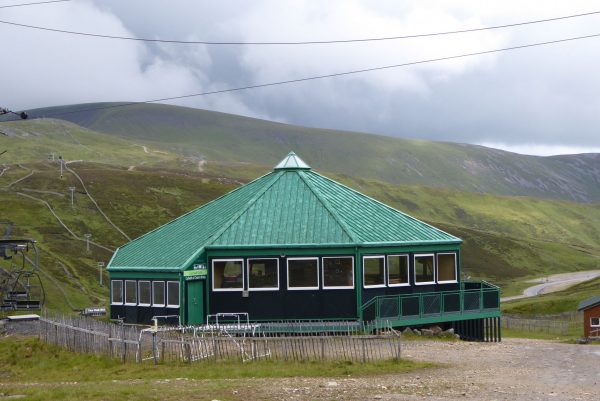 The track bends left crossing a ski run and then when we are past the far snow fence turns right onto a narrower track again climbing steeply. This route recrosses the ski run and then as it forks we take the left branch, which is even more arduously uphill. This is a proper workout, normally when we climb steep hills we have had the opportunity to warm the legs up with a few miles first. Ascending abruptly from the start is a real challenge. 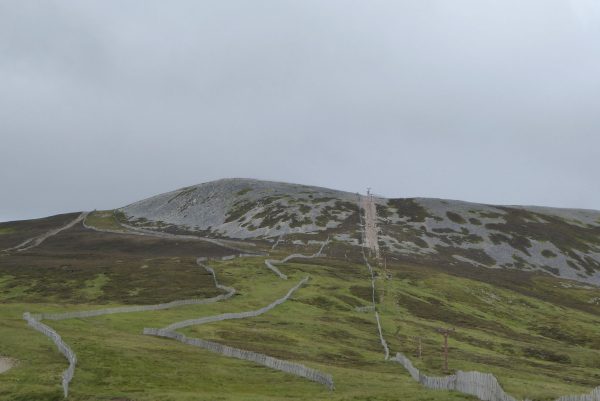 Reaching the ridge to the west of Carn Aosda we carry on along the track that cuts around the summit and climb to the top from the east side. The cairn at the top stands 3,009 feet above sea level so just squeezes into the Munro category. Apparently this is the easiest of all Munro’s to climb because our starting point at Glenshee was 2,099 feet above sea level. 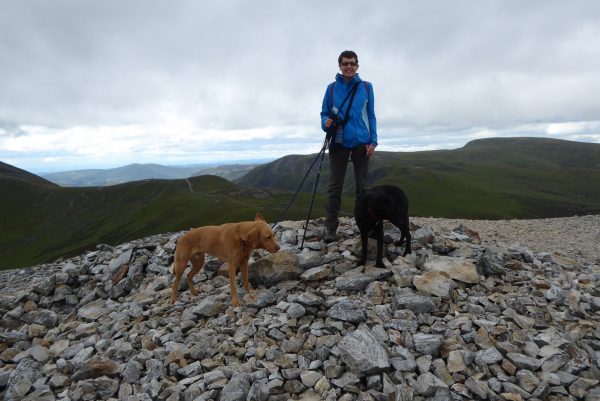 This is a busy mountain, there are ski lifts and ski runs heading up the hill and with four pistes there is a lot of fencing. However, none of this detracts from the view from the summit and we are the only people up here today. 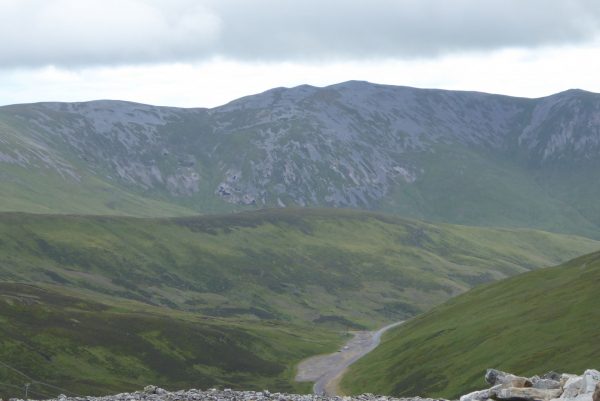 We leave the summit towards the southwest and soon rejoin the track we met earlier on the summit ridge. Instead of turning downhill we follow the track over the top of pistes and then descend towards Loch Vrotachan. 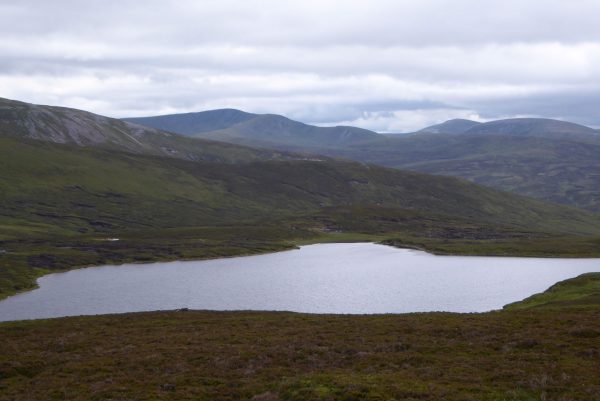 Before reaching the Loch the track goes left and starts to climb again, this time heading towards The Cairnwell. Just before we reach a minor summit we turn right onto a narrower path that heads west and then southwest along the edge of the ridge towards Carn nan Sac. The route goes round the crags of Creag a’Choire Dhirich and passes a couple of lochans (small lochs). To our right we spot a mountain hare that is happy to pose for a photograph. 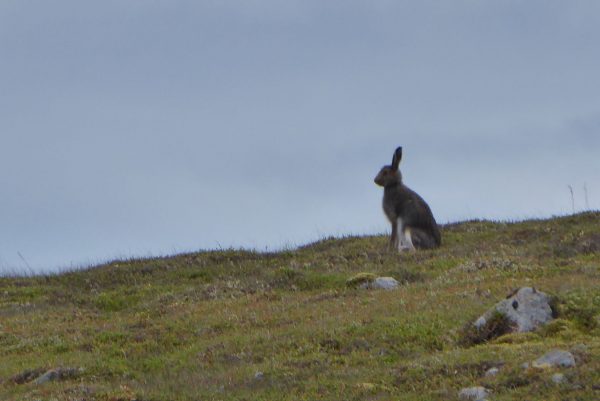 Continuing on the track we reach Carn nan Sac, at this point we are 3,018 feet above sea level. Strangely this summit is no longer classed as a Munro, it was listed as one until 1981 at which time it was re-classified as a subsidiary top of Carn a’Gheoidh. 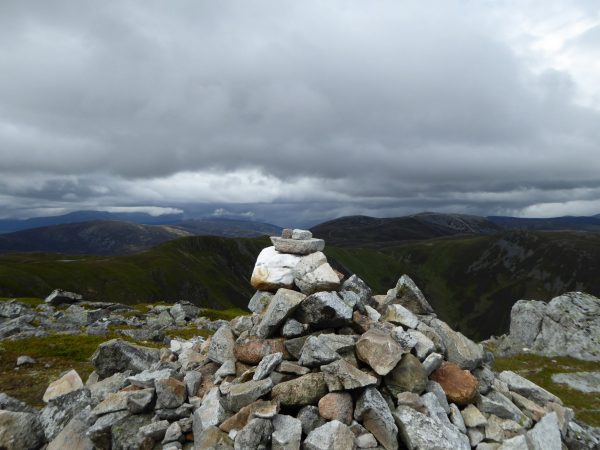 We feel a bit cheated, but whatever the classification it is still a cracking spot with stunning views! 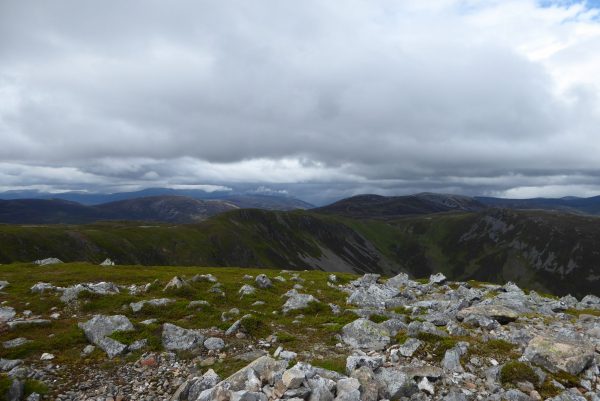 For some bizarre reason Lynnie feels that reaching this point justifies a pose on one leg. I can only assume that the lack of oxygen at this altitude is beginning to have an impact! 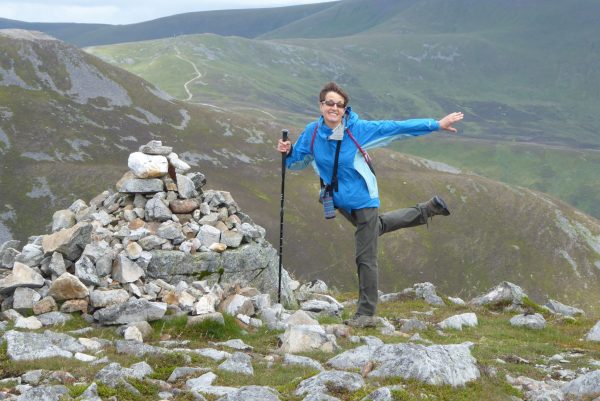 From Carn nan Sac we head across the ridge towards a cairn at The Coolah and then follow the path across the plateau towards Carn a’Gheoidh. The final ascent to the rocky summit is a steady climb, but nothing in comparison to the earlier climb up Carn Aosda. 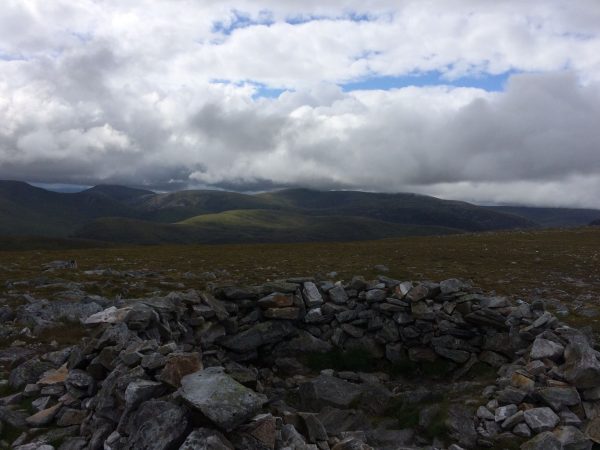 Carn a’Gheoidh stands at 3,198 feet and once again the views are outstanding. 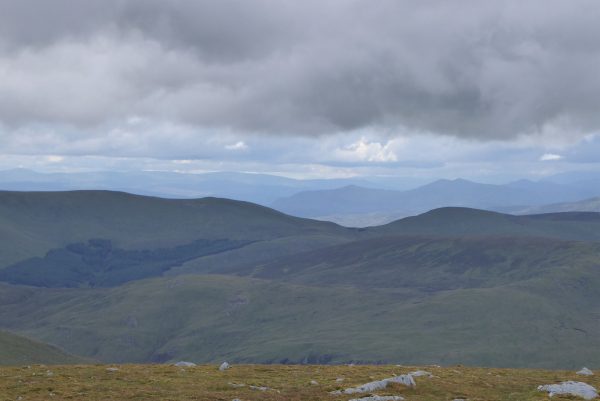 This summit is well clear of the ski resort and there is a feeling of isolation up here. Everywhere you look there is a lot of “out”. 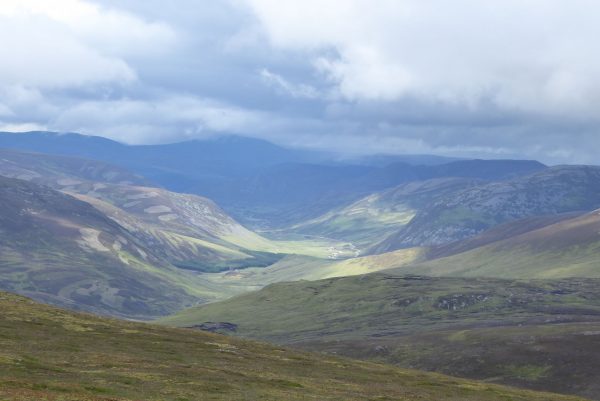 Crosby seeks some respite from the wind behind the cairn. 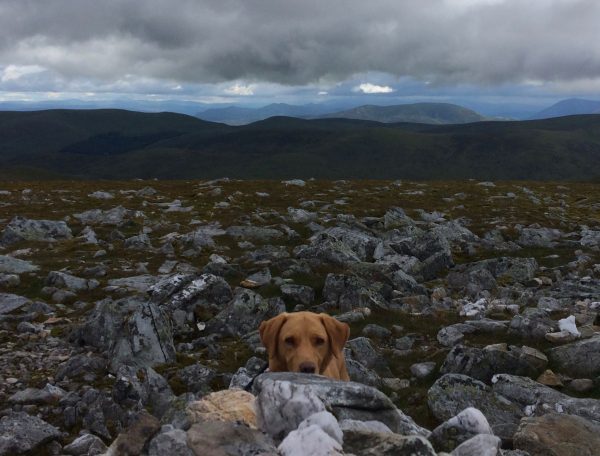 Having climbed two Munro’s in one day Lynnie goes for another one-legged pose. I am starting to get a bit concerned! 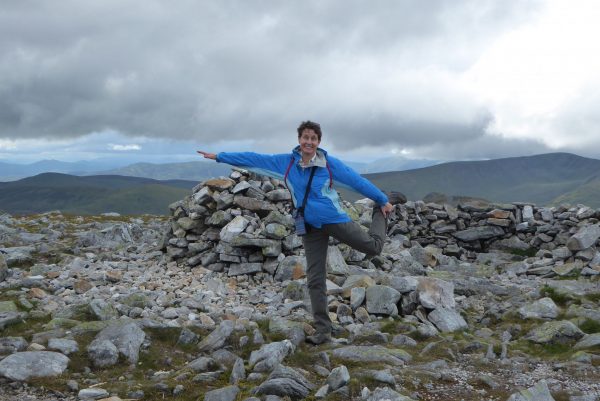 From the summit we make our way back down the same route we came up and head towards the cairn at The Coolah on reaching it we follow a north-easterly path passing to the right of the lochans we saw earlier. From here we retrace our steps along the path of Creag a’Choire Dhirich to reach the point where we had turned off the main track leading to The Cairnwell. Here we turn right and follow the broad uphill track with the ski run fencing to our left. 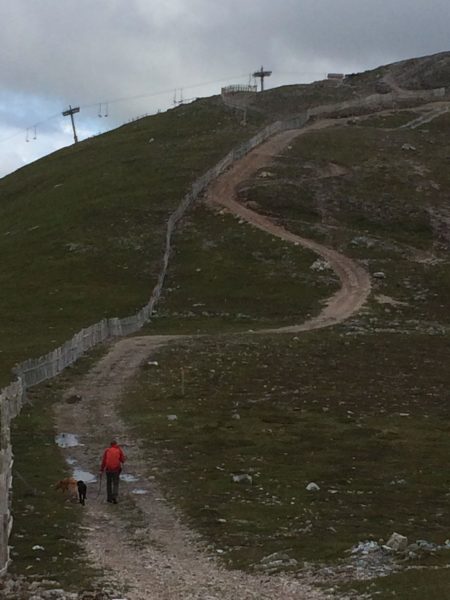 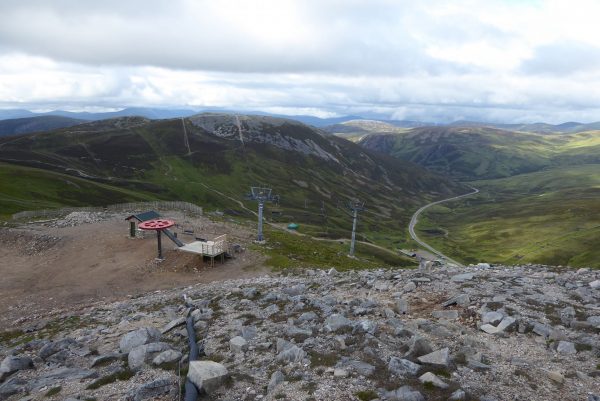 The final ascent is demanding and rocky and Lynnie is starting to lag behind. She says it‘s because she keeps stopping to take pictures. I think all the one-legged antics have worn her out! The summit of The Cairnwell is 3,061 feet, so our third recognised Munro of the day. 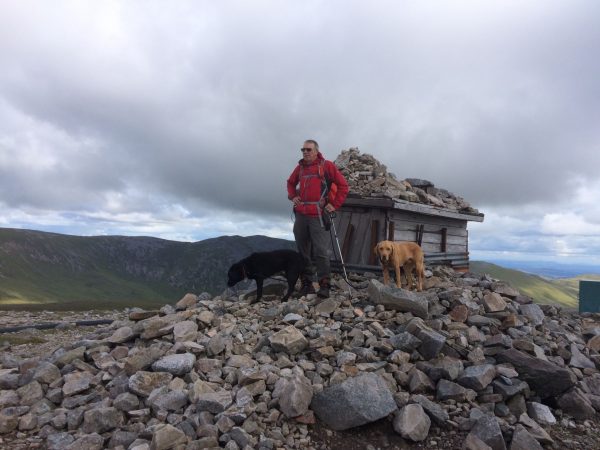 The top is occupied by a radio transmitter mast and buildings, I am sure some think this spoils it, but if you put these to your back and look out it is a cracking spot. 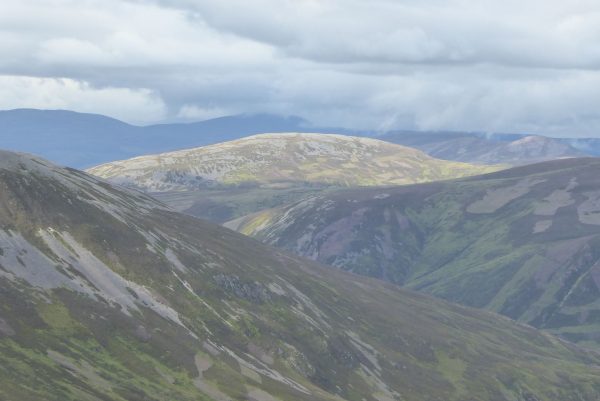 Needless to say it does not take too long for Lynnie to be standing on one leg again! 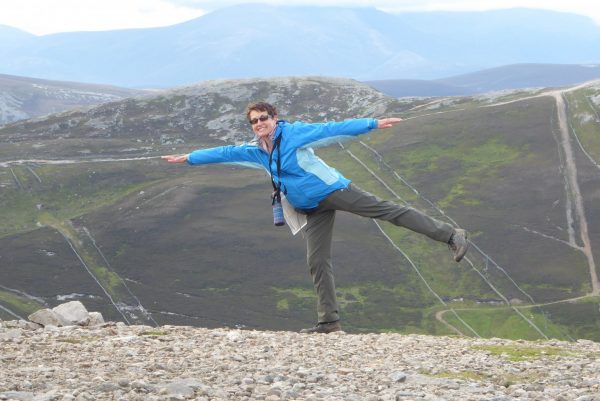 The descent is straightforward, we retrace our steps down the main path towards Loch Vrotachan and at a junction of paths turn right and soon we are at the octagonal café building we passed earlier. From here it is just the final short, steep descent back to the car – easy to describe, but I find going downhill far more wearing on the knees than going uphill. 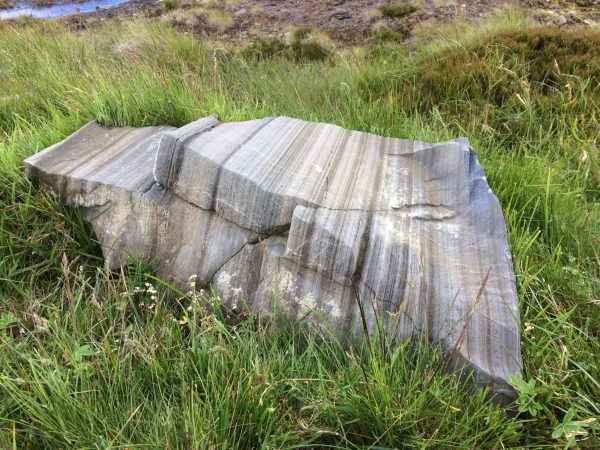 At the start of the walk we had never climbed a Munro and now we have “bagged” three (and if we had done the walk pre 1981 would have had four!).   We have seen two other walkers in the distance but at no time during the eight and half miles have we seen anyone to speak to. It is amazing that you can be on top of three such accessible peaks and see no one else. 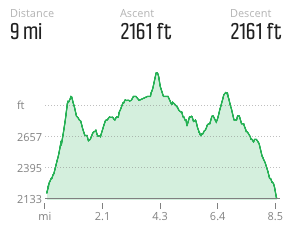