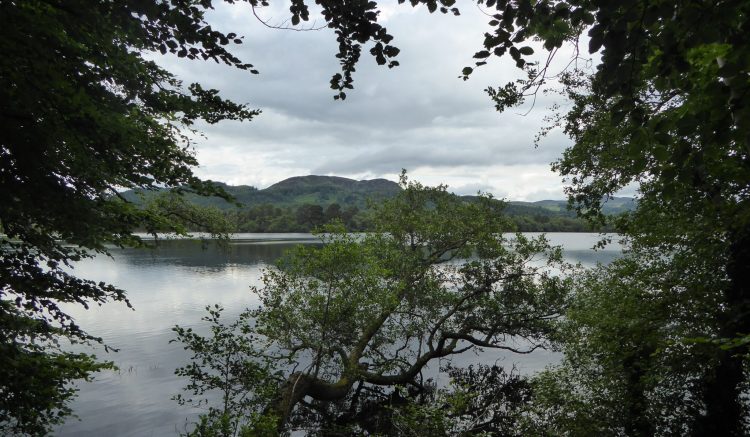 After yesterday’s up hill walk Lynnie has suggested we should take a more leisurely stroll today and combine our walk with a bit of a wander around Dunkeld.  We have already done a couple of walks through Atholl Woods this week, both of which have been stunning so decide to start our walk once again from the Cally car park just outside of Dunkeld.

Leaving the car park we walk back towards the main track where there is a junction of ways.  We take the route signed for Loch of Lowes and Fungarth. After about four hundred yards we turn right onto a way marked track leading into woodland.  As this approaches a road we fork left on the way marked path to go through a copse of beech trees. 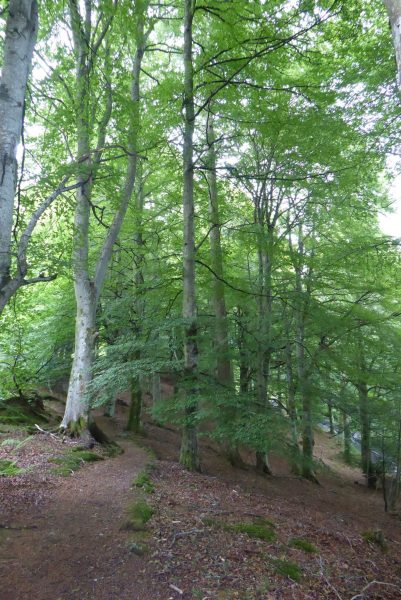 This leads us to the A923 which we cross and then turn right on the path besides the road that soon turns left up the tarmac drive of Dunkeld and Birnham Golf Club.

We head through the car park ignoring the signpost for a path on the left and at the far end of the car park take a footpath going down to the edge of the course and through a kissing gate into a field.  The route is now clear as it passes across fields to reach a gate and join a track. 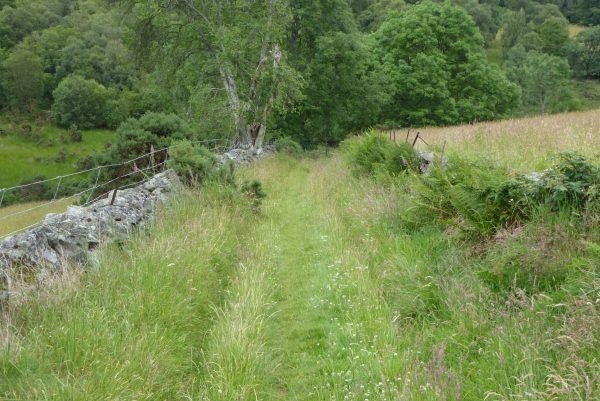 After passing a cottage the path swings to the left along a track with views back across the golf course. 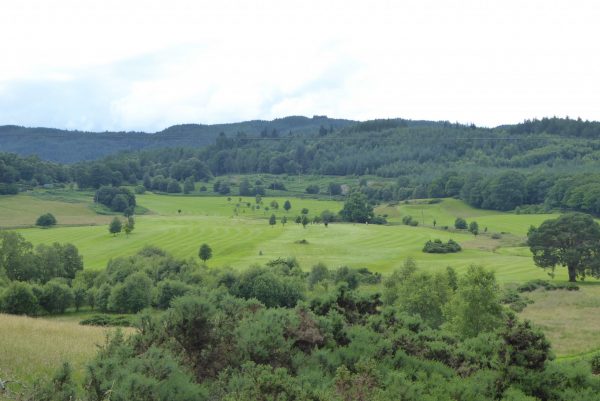 At another gate we go through and head straight on along the track, still passing the golf course, and then reach a minor road, we cross and join a path at the edge of Loch of Lowes.  We stop at the hide here to see if any of the Osprey, which inhabit this loch are in view.

The path winds its way along the edge of the Loch and we arrive at the Scottish Wildlife Trust reserve centre just as it closes.  We had hoped to be able to watch the webcam here of the Osprey.  (I later discover that this is available on-line and is well worth viewing.)

From here we retrace our steps alongside the loch (disappointingly there is not much of a view of the loch from the path).  On reaching the tarmac lane we cross and take the track back above the golf course.  When we reach a gate we fork left along the track way marked to Dunkeld. 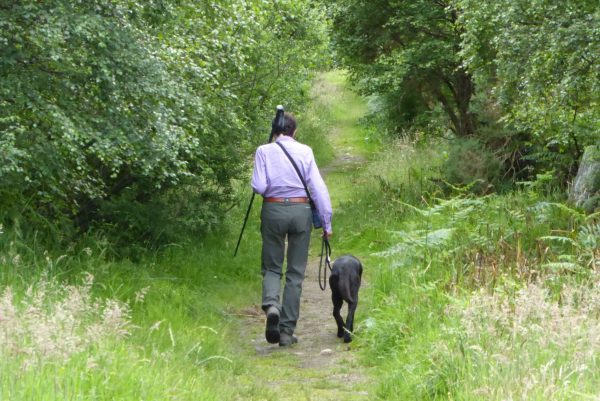 The route is now straightforward and we stay on the track until we reach a tarmac road and keep right.  At houses we turn right again to follow the road into Dunkeld.  Most of the old settlement of Dunkeld was destroyed at the Battle of Dunkeld on 21 August 1689.  The battle was between the Jacobites who supported the deposed King James VII of Scotland and a regiment of Cameronian Covenanters supporting William of Orange (King William III).

There is plenty of historic interest in Dunkeld.  We head to the Atholl Memorial Fountain, the notice board provides historic detail and explains that the fountain was built in 1866 ‘to the memory of George Augustus Frederick John 6th Duke of Atholl.  Funds were raised for the fountain through public subscription.  Apparently he was responsible for the introduction of a piped water supply to Dunkeld.  Before this water was taken from the River Tay. 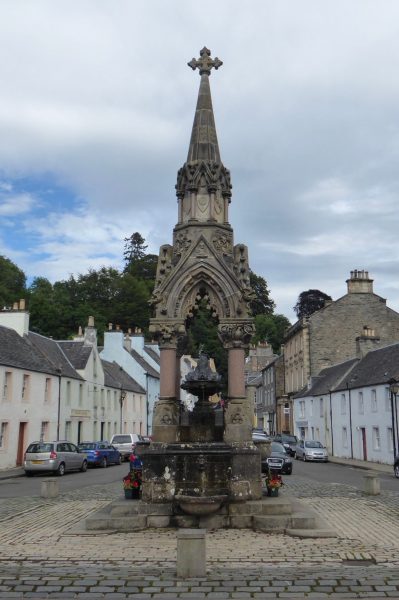 We wander down Cathedral Street with virtually every house adorned with a blue plaque and reach the Cathedral gates.  A rather officious woman calls out in an abrupt manner “It’s closed!” Perhaps she was concerned that we had dogs with us, apparently they are not allowed in the Cathedral grounds, or she sensed our lack of belief in the Almighty and feared a bolt of lightening might strike as soon as passed through the gates. 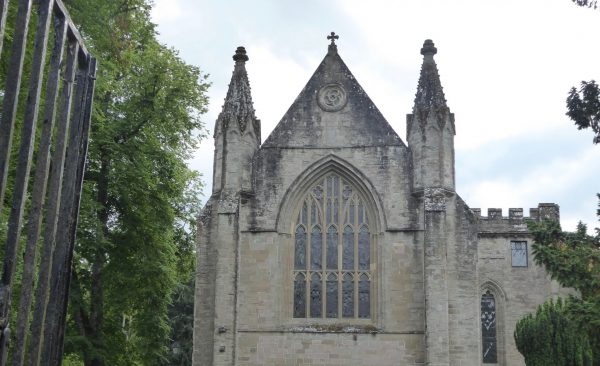 We take the path down besides the cathedral grounds to the River Tay; from here there is a stunning view of Dunkeld Bridge.  The Tay is 177 miles long and at Dunkeld it presented a significant barrier to communications.  For centuries the only safe crossing in this area was to the south at Perth, there were wooden bridges at Dunkeld but these were washed away when the river was in spate and ferry crossings could be hazardous in high waters.

Thomas Telford designed the bridge, which opened in March 1809; he had foresight because the bridge can comfortably cope with modern traffic, including lorries.  As well as its practical use it is a fine looking bit of engineering. 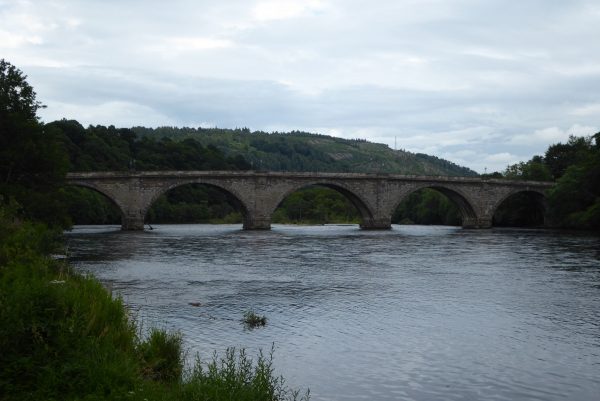 We wander around reading the blue plaques, this is the sort of place I could write pages about, and eventually find ourselves on the Atholl Road and head out of town passing the Royal Dunkeld Hotel.  The hotel was built in 1810, to make the most of the increased traffic coming across Telford’s new bridge, at the time Dunkeld became known as the “Gateway to the Highlands”. 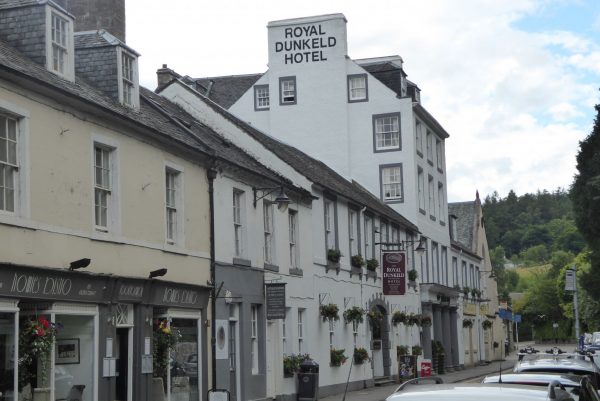 We wander out of the town and soon pass the grand gateway to the Dunkeld House Hotel. 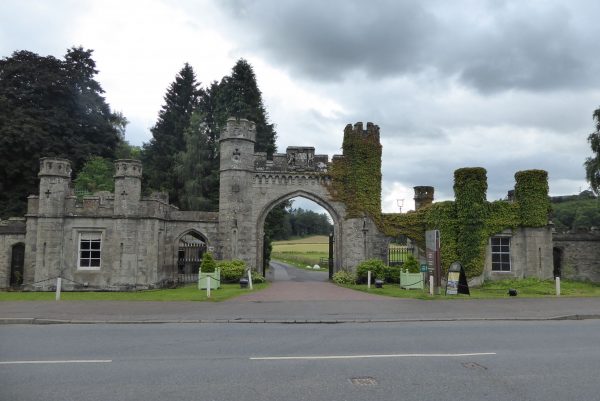 At a T-junction we turn right towards Blairgowrie soon passing the entrance to an industrial estate and then reach the track leading us back to the Cally Car Park.

Our walk has been short by our standards but there has been plenty to see in Dunkeld and it has been a fascinating mooch about.

To view this route of OS Maps Click Here

To follow this walk you will need Ordnance Survey Explorer Map 379 – Dunkeld, Aberfeldy and Glen Almond 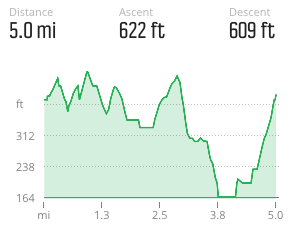