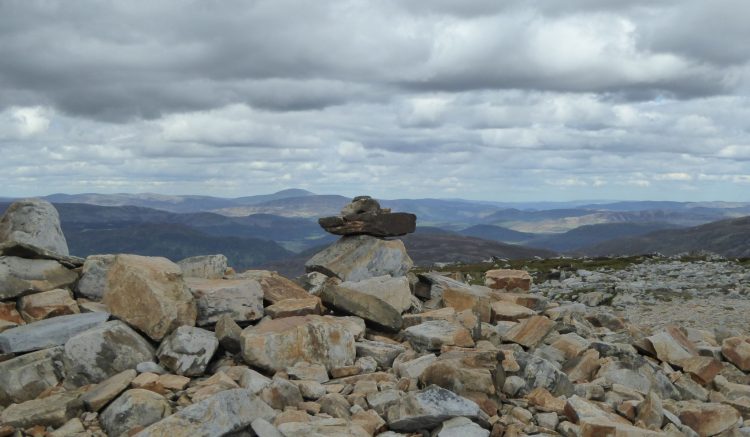 When planning our trip to Scotland I took some advice from a Scottish friend who recommended visiting Braemar.  We are already five hundred miles from home so travelling another thirty miles north seems okay. The only downside as far as Lynnie is concerned is that we are heading into the Cairngorms. When we look at the map there is a lot of out, mostly heavily contoured, so she knows I am bound to have a walk up a hill planned.

The drive from Blairgowrie to Braemar along Glen Clunie is stunning.  It is the sort of drive where you really have to pay attention to the road as you could so easily be distracted by the views!  Arriving in Braemar we park in the car park close to the ruins of the castle.

We take a quick look around before our walk, I am taken by the water fountain on which the inscription reads “In Memoriam Elizabeth Louisa Oswald, Wife of Lt Col James Ross Farquharson of Invercauld, Who died Aug 10th 1870, Aged 24 years.” 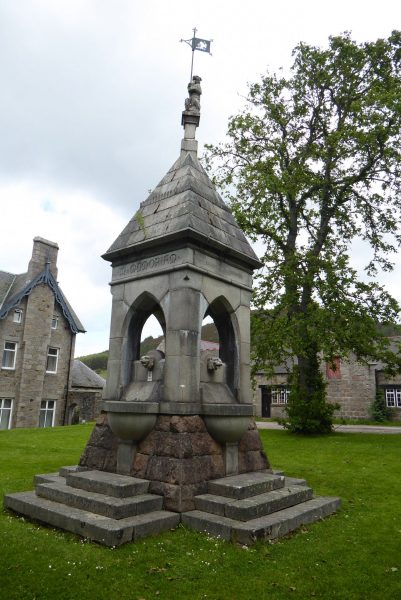 We set off by crossing the bridge over the River Clunie, the water level is low at the moment, but when higher this must be spectacular. 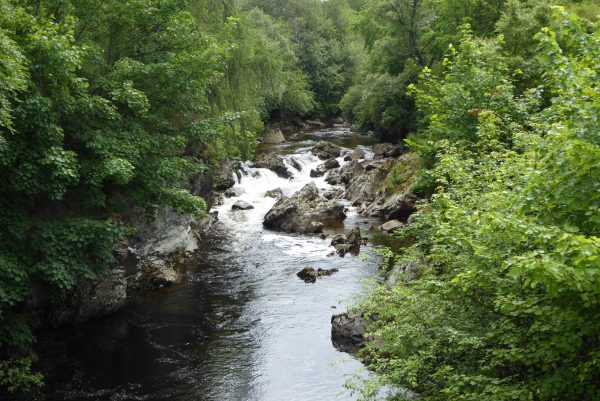 We pass the Fife Arms Hotel, currently undergoing a major renovation and carry on along the main street (Mar Road).  Just prior to the roundabout there is a monument in celebration of Queen Victoria’s Diamond Jubilee. Victoria was of course a local in these parts with her nearby estate at Balmoral. 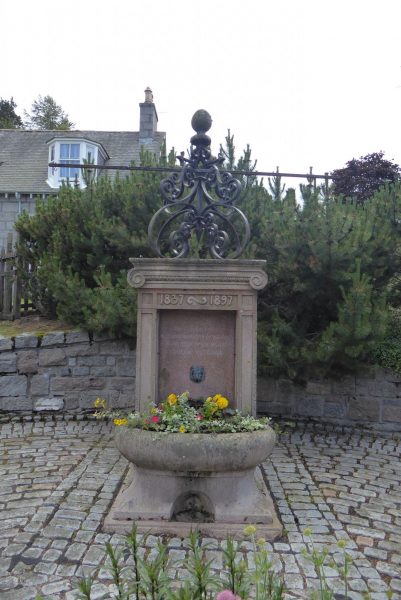 At the roundabout we turn left and then take the right hand fork up Chapel Brae.  We pass a car park next to a pond and then keep left up the track signed for Morrone.  At a fork we keep left going through a gate and stay on the track as it heads uphill.  We pass a house on the left and then bear right, the path now starts to climb more steeply.

At a junction of paths we keep right and bear left at the next junction continuing uphill.  We reach a viewpoint indicator placed here by the Deeside Field Club.  It helpfully identifies the surrounding mountains and has a poem by George Stephen inscribed upon it. “Upon this vantage ground I fain would stand; The prospect with delight my spirit fills; How often in glowing rapture have I scanned; The waving outline of the distant hills.” 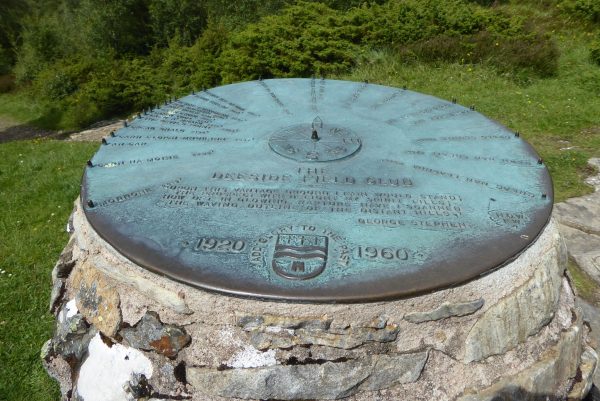 Continuing past the viewpoint we fork right climbing steeply uphill until we reach a gate leading to open moorland.  By the gate is a photo post.  I have not come across one before, but they are a great idea.  It has been placed there by the Cairngorms National Park and people are encouraged to put there camera in the holder and take a picture and then upload it to their website.  This enables them to capture changes in the view. 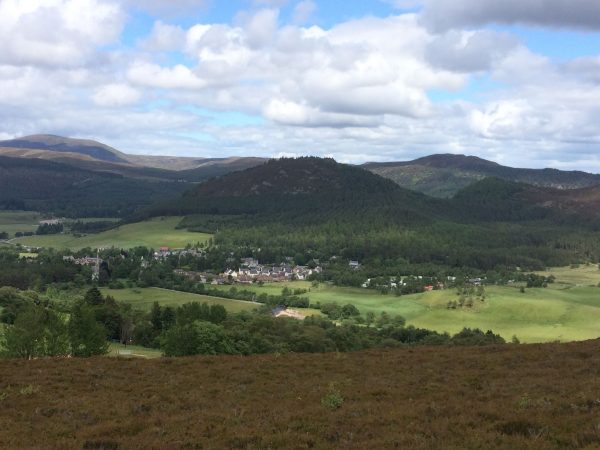 Now the route is straightforward, we just follow the path uphill.  When climbing a hill like this it is easy to just focus on the path in front, we have learnt that it is important to stop periodically and admire the views.  This has the added advantage of providing the occasional breather. 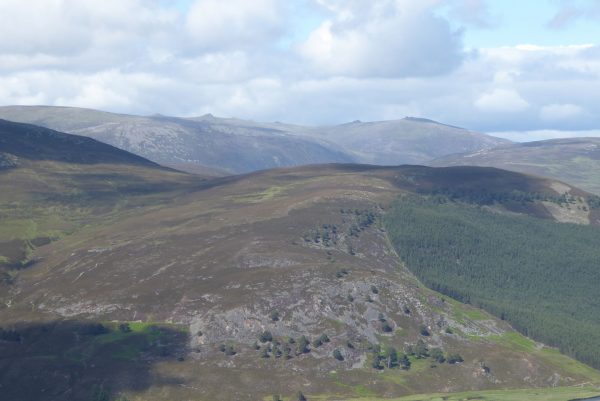 This is one of those walks with a number of false summits.  We keep thinking it will appear over the next ridge but it never seems to. We go through a series of cairns. 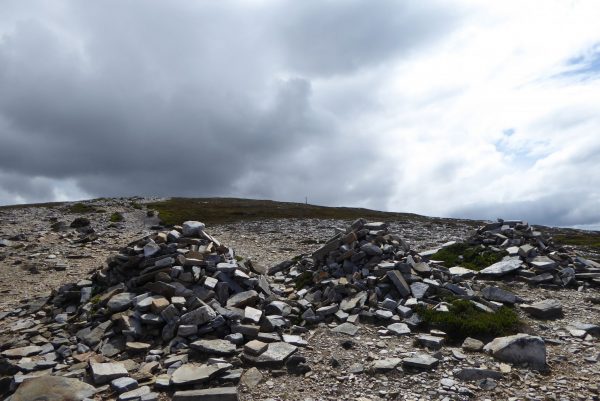 Then as the climb becomes less steep we see the mast on Morrone. 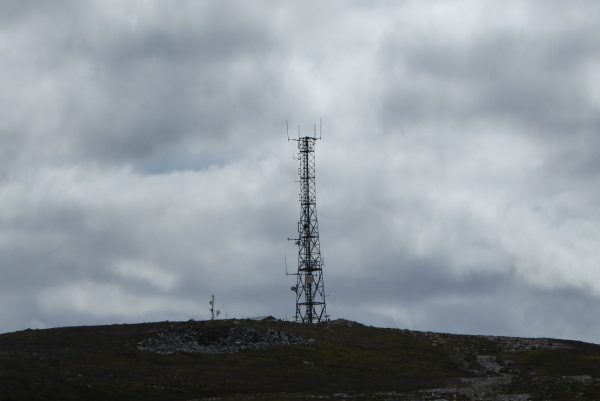 I know it is a phrase that I use frequently, but this really is a cracking spot.  The panoramic views are unbelievable.  In the distance we can see the distinctive summit of The Cairnwell. 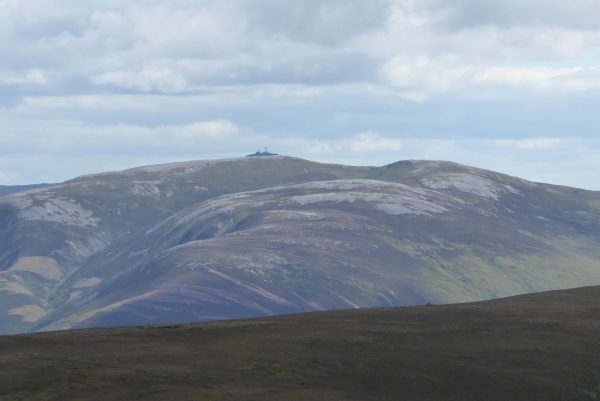 Dexter and Crosby are, of course, keen to have a picture at the trig point to add to their collection. 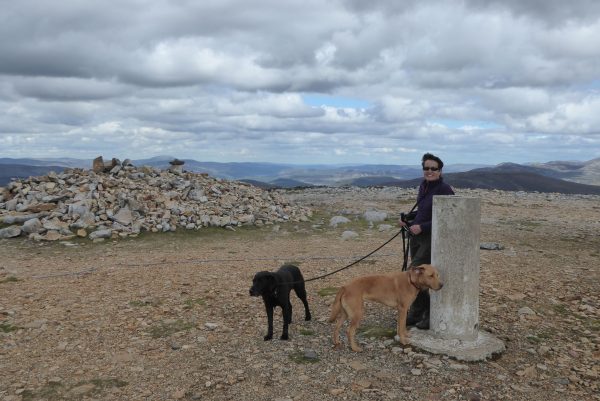 The summit itself is occupied by a radio mast and building.  On one of the buildings there is an inscription “Brian M.Goring Radio Relay Hut, erected by Braemar Mountain Rescue Association with funds donated in memory of Brian M.Goring, who died of exposure in the Cairngorms April 1967.”  It is a stark reminder that whilst this place is beautiful it can also be very inhospitable. 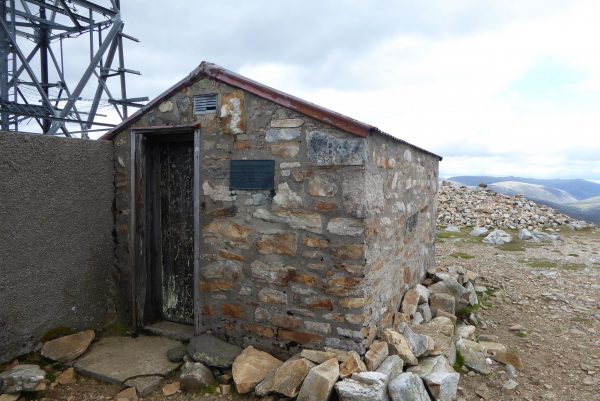 The summit of this peak is 2,818 feet above sea level, so one of the highest points we have been in the UK, in Scottish Hill terms this falls short of being a Munro (hills over 3,000 feet) but is a Corbett (between 2,500 and 3,000 feet).  They are so called because the list of these hills was first complied in 1920 by John Rooke Corbett, there are 222 of these to climb!  If they all have views like this one it would be well worth the effort. 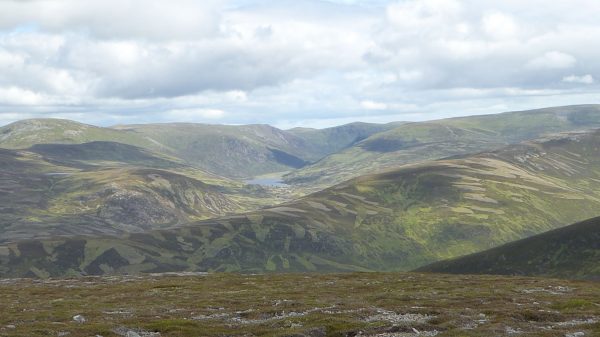 Lynnie is obviously exhilarated at reaching the summit and starts to pose near the edge. 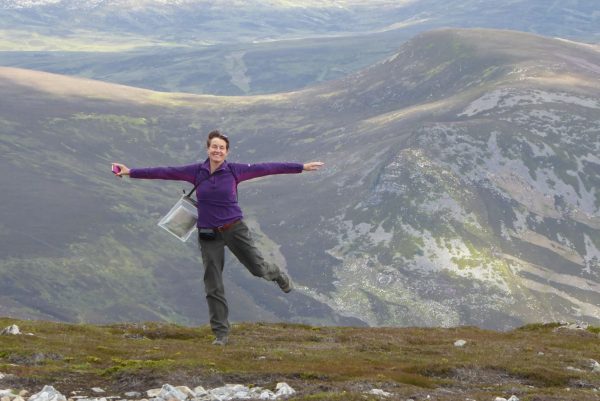 Or is it an optical illusion?  One thing for sure I am not going to venture too close to find out! 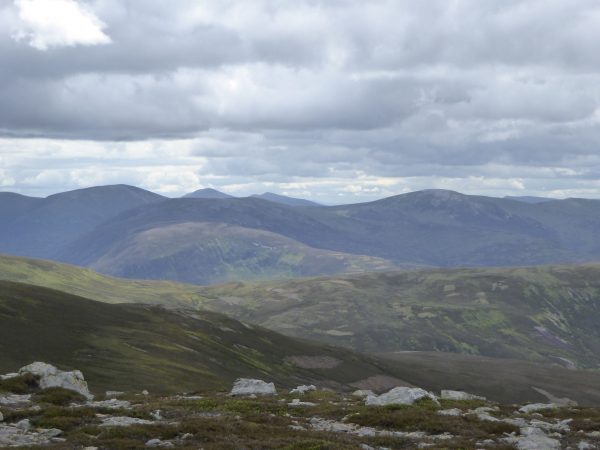 Somewhat reluctantly we leave the summit.  I always find it amazing that we have places like this to ourselves, okay it takes some effort to get up here but it is so rewarding. 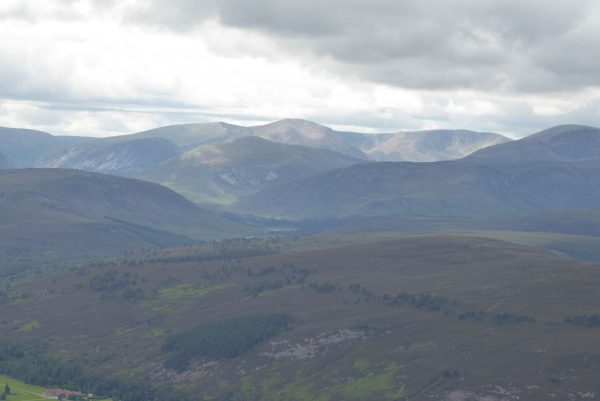 The route down is straightforward, we head southwesterly on a clear track from the summit.  This soon climbs a smaller summit and then heads southeast before turning towards the east. 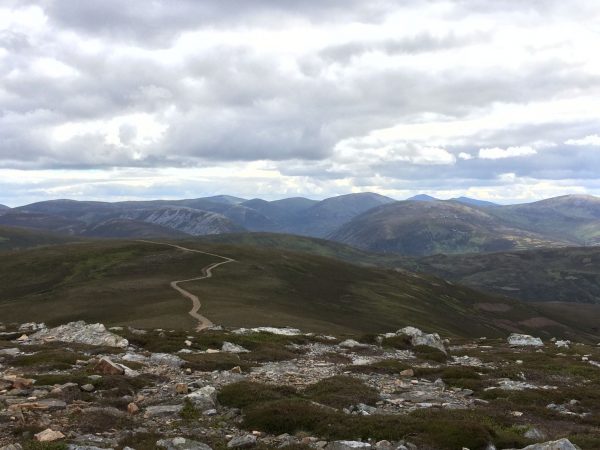 The track wends its way down the hill and then reaches a minor road, The Old Military Road, this is another of General Wade’s Military Roads. We turn left along the road crossing the Coldrach Burn and heading back along the Glen to Braemar. 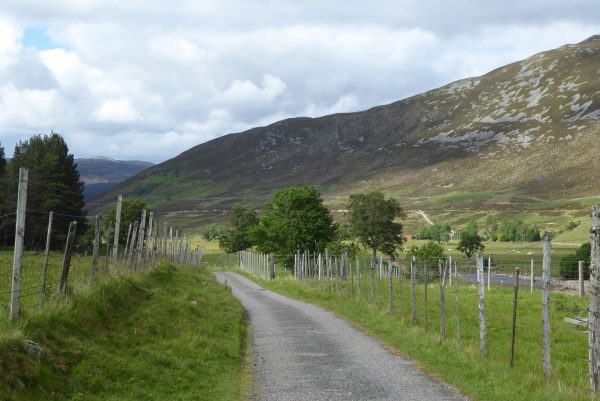 It is a welcome relief to my knees to be walking along the road; the steep uphill and downhill sections play havoc with my joints.  The River Clunie runs to our right.

After a couple of miles the road crosses a cattle grid and goes through Braemar Golf Course.  This is the highest eighteen-hole golf course in Scotland at around 1,200 feet.  It is in a great setting. 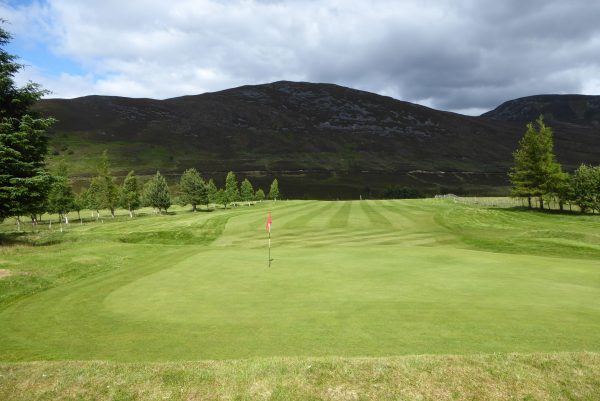 I am not sure how the green keeper copes with the deer on the greens.  As we walk along one wanders across the track in front of us and then grazes close by seemingly unperturbed by the dogs or us. 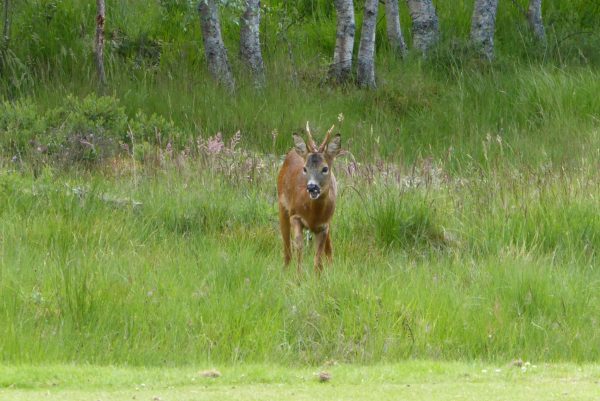 We follow the road through the golf course and then into Braemar stopping just before the bridge to look at a memorial.  The inscription on this one reads “In memorium Vicker’s Wellington R1646.  On 19 January 1942 during a routine training flight this aircraft crashed on the high ground near Braemar due to poor weather conditions.  All eight crew based at 20 Operations Training Unit, RAF Lossiemouth, lost their lives.  Six crew members lie at rest within the Commonwealth Graves Commission Reservation, Dyce Old Churchyard, Aberdeen and two in their home cemeteries in England.  The two Bristol Pegasus XVIII engines were removed from the crash site in 1999 and one is preserved here as a permanent memorial to those named below and all other aircrew who lost their lives in the Cairngorm Mountains. 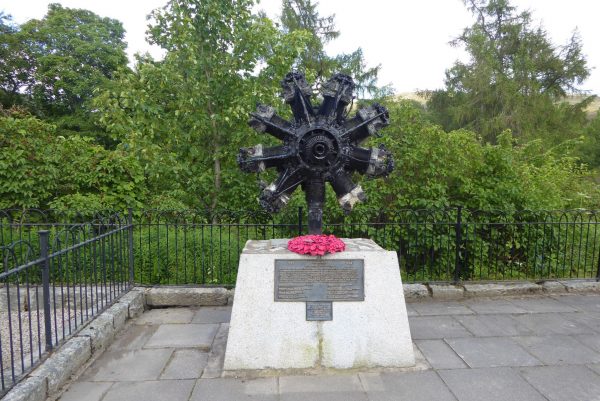 The eight crew members were aged between nineteen and twenty-five, three were English, two were Canadian, two Australian and one from New Zealand.  To read about the loss of these young lives is a poignant end to what has been a cracking walk of just over seven miles.  It does not sound far, but there was a serious ascent and descent involved!

We arrive back at the car park and take a brief look at the remains of the 14th century Kindrochit Castle. 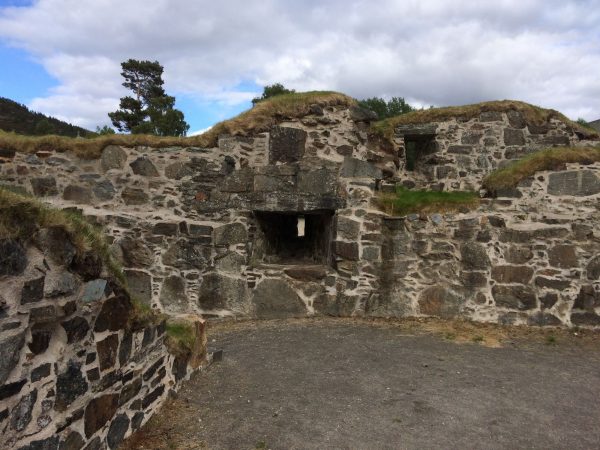 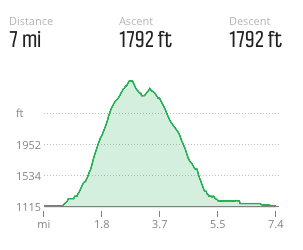