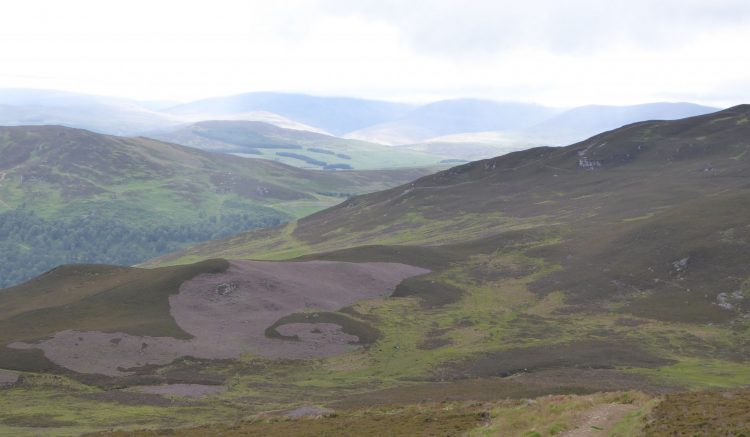 Almost ten years ago Lynnie and I briefly visited Pitlochry, on that occasion we took a short stroll around town but didn’t have time for a good walk in the surrounding hills.  The weather is set fair, ideal for hill walking, so we are off to Pitlochry. On arrival the place is packed, it is Sunday and this is obviously the place to visit.

Eventually we find a parking space near the station.  It would appear there are no charges on a Sunday, but that doesn’t stop people putting money into the machine and buying a ticket.  I carefully read the information board it clearly states charges apply Monday to Saturday, I check with a local who confirms that I can keep my money in my pocket.

Our walk starts by heading through town back to the main road and turning left and then taking the right turn into Larchwood Road.  At the turning is Sunnybrae Cottage, this used to be an Inn, the information board tells of a tragic event that took place here in 1767.  Two cousins John and Donald Stewart got into a scuffle which resulted in John being accidently stabbed.  Donald hid until the funeral procession passed; apparently it was an old highland belief that if a murderer could see the light under his victim’s coffin he would escape punishment.  Donald then fled to Holland before returning a free man. 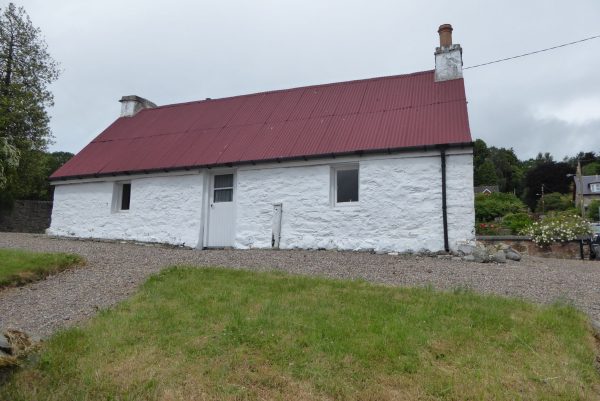 We walk up Larchwood Road following it to the left and then around a sharp corner to continue up Golf Course Road. At a fork in the road we head right (still on Golf Course Road) and pause to watch the wildfowl on The Cuilc. 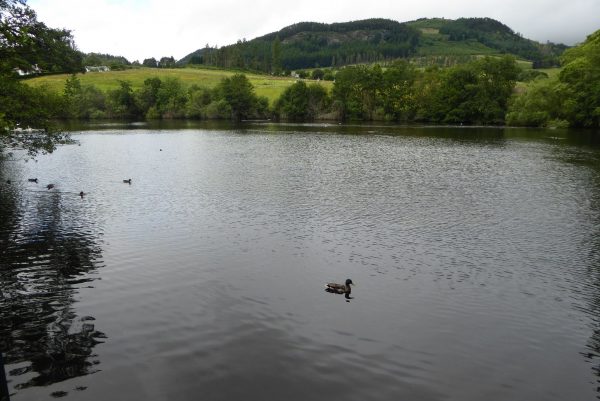 Continuing along the road as it gradually climbs to pass the entrance to Pitlochry Golf Club I start to regret leaving my golf clubs at home, this is another stunning golf course. 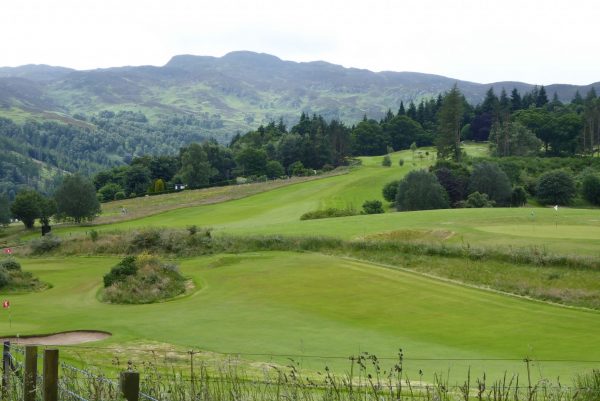 We carry on to a T-junction and turn right towards Moulin. As the road bends to the right we turn sharp left up a steep hill soon passing a small car park on our right and continuing on to go through another car park and take a signed uphill path through beech trees.

We cross a track and continue uphill besides woods before turning left onto a small track. After crossing another track we take the path over a bridge and through woodland running alongside the Moulin Burn to a gate onto moorland. 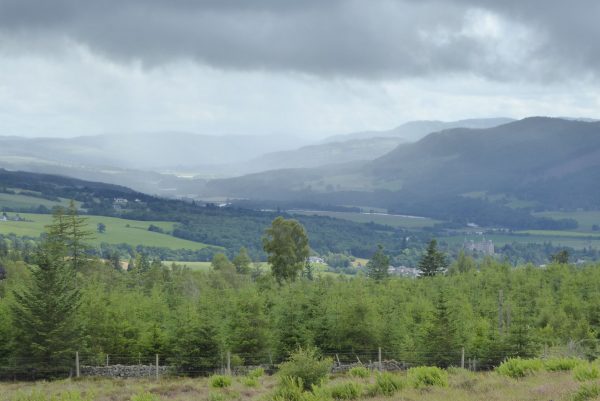 The path is clear and well made as it heads uphill towards Ben Vrackie.  At a fork in the path we go left marked for Bealach Walk.  The route climbs as it heads up over Bealach na Searmoin.

Lynnie realises with some relief that we are not heading up Ben Vrackie; it is one of those hills she prefers to look at rather than walk up. 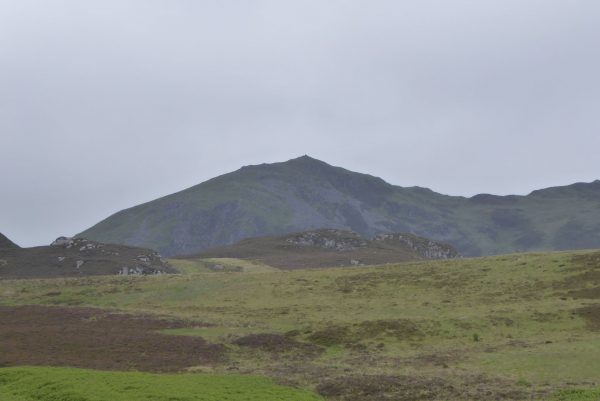 This is a cracking spot; we meet one other couple walking in the opposite direction, an amazing contrast to the packed streets of Pitlochry.  I know where I would rather be! 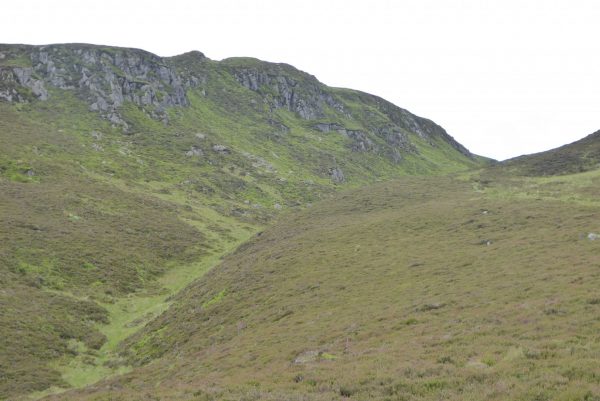 As we come over through the pass we get stunning views towards Blair Atholl. 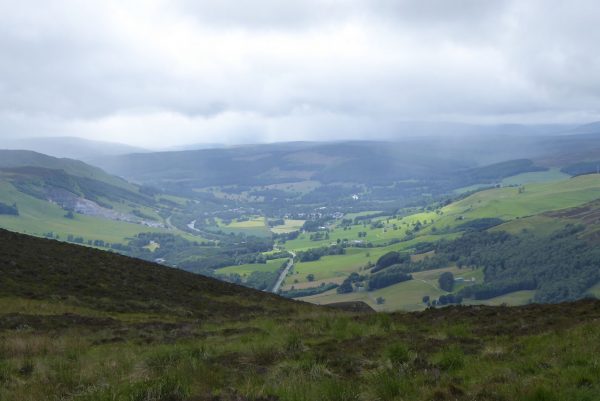 The path now descends and at a junction of paths we follow the sign for Killiecrankie and continue downhill. 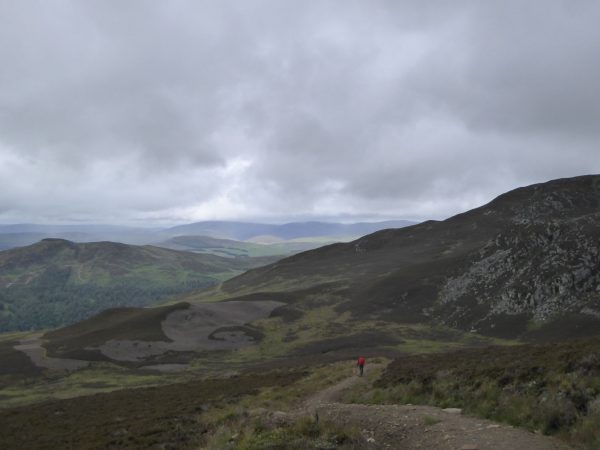 We cross a footbridge over a stream and carry on to a gate in a fence, from here a grassy track heads downhill towards a sheepfold close to the water treatment works. 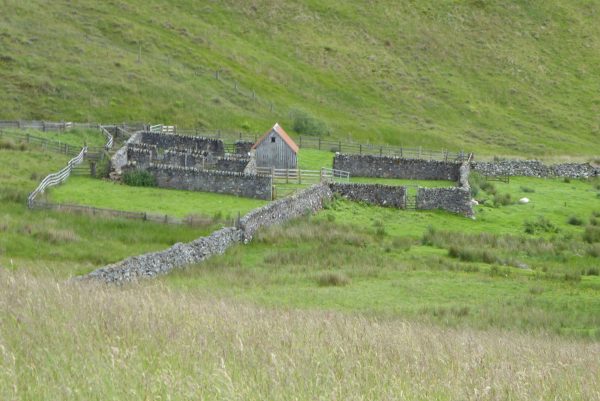 We go through a couple of gates to reach a metal track and follow this downhill through another couple of gates and then under the A9.  At a junction we cross the B8079 and turn left for the Killiecrankie Visitor Centre. We take the footpath just before the visitors centre and go down steps on a fenced path heading towards the River Garry.

We take a short detour to visit Soldier’s Leap.  During the Jacobite Rebellion the Battle of Killiecrankie was fought on the 27th July 1689.  The government had sent an army under the control of General Mackay to deal with Viscount Dundee and his Jacobite army based in Atholl.  The Jacobites completely overwhelmed General Mackay’s troops in a matter of minutes, although Viscount Dundee was lost in the battle.

It is said that to escape the Jacobites one of Mackay’s men, a Donald McBean jumped eighteen feet across the River Garry, the spot is now known as Soldier’s Leap.  Mike Powell of the USA set the IAAF recognised world record in 1991 at just over twenty-nine feet. The British record is just less than twenty-eight feet set by Greg Rutherford in 2014. These were trained athletes with a measured run up, but they did not have a group of Scots with murderous intent chasing them, so perhaps eighteen feet is doable! 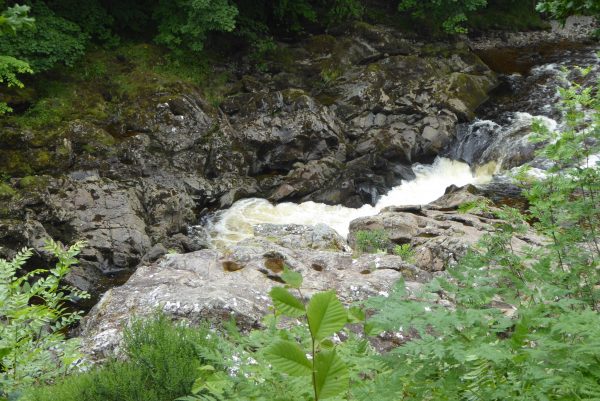 Returning to the main path we turn right and are soon walking alongside the arches of the railway viaduct.  There is a notice under the viaduct stating “This 510’ Long Viaduct, which was designed for the Inverness and Perth Junction Railway (The Highland Railway Company from 1865) by Joseph Mitchell was completed in 1863 at a cost of £5,730.  The ten masonry arches are each 35’ span and the extreme height to the parapet wall is 54’” This is a pretty comprehensive description of the viaduct.  I would add that it is bloody amazing! 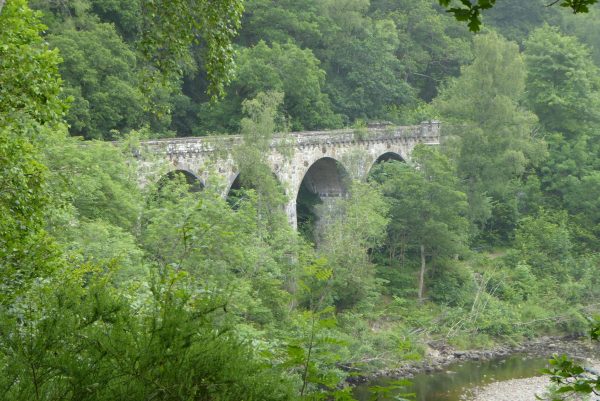 The walk is now straight forward following the path downstream with the River Garry on our right.  This is a cracking stretch of River and the only thing that delays our progress is stopping to look at the view. 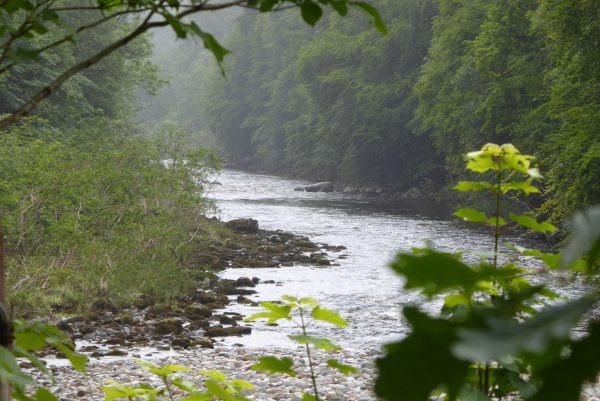 We soon pass a small wooden corral where Killiecrankie Charcoal is produced.  The area here is classed as a site of special scientific interest (SSI) due to the semi-ancient oak woodland.  The National Trust for Scotland, owners of the site, are seeking to remove the non-native and invasive species including beech that block the sunlight, thereby, hindering the growth of native flowers and shrubs which, in turn attract a variety of birds and the red squirrels.  The beech that is removed is used to produce charcoal. 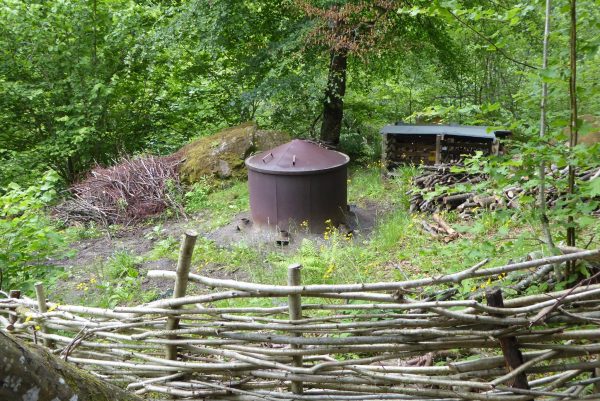 At home one of my favourite walks is alongside a beech copse, I may view it differently from now on, but the chances of seeing red squirrels in Wiltshire during my lifetime are pretty small!

Setting a good pace along the way we come across the Balfour Stone in the middle of the path.  The notice board states “Here Brigadier Barthold Balfour of the Dutch brigade, who commanded the left wing of General McKay’s Redcoat army was killed by one of the Jacobites Atholl men.  The stone is reputed to mark Balfour’s Grave”. I am surprised he didn’t break his neck tripping on the bloody rock in the middle of the path before the Jacobites got to him! 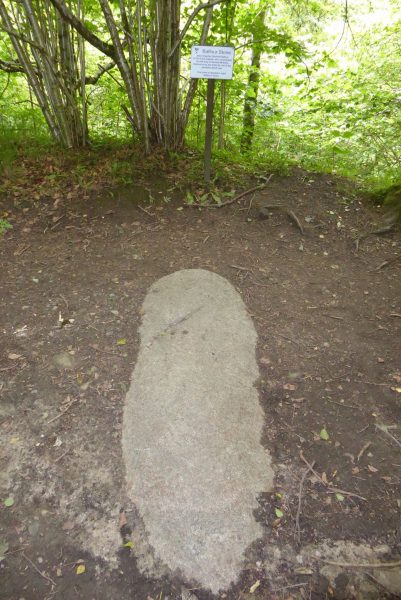 We soon pass the Garry Bridge, a footbridge over the river and briefly wander onto the bridge to enjoy the views down the gorge.  What a stunning area this is! 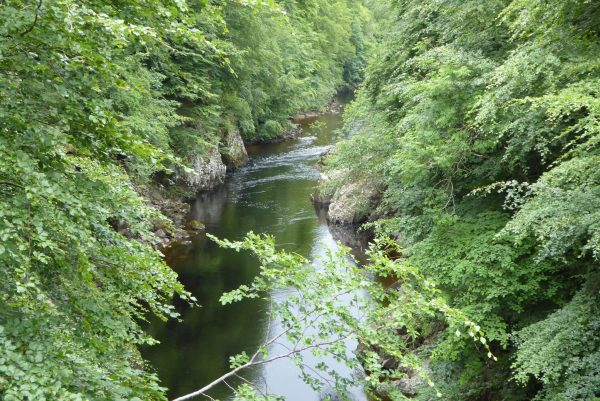 To be honest there are sections, albeit brief, of the next part of the walk that made me feel a bit jittery.  The path now follows a route above the River Garry with the occasional significant drop.  Fortunately these sections are brief and not “the Freddy on hands and knees sort of drops” we have encountered a few times on previous walks, however, quite enough to make my knees wobble.

Fortunately we are soon back on lower ground, and below a road bridge we wander down to the rocks which, due to the low level of the river provide access to the water’s edge.  Here we get a wonderful view of the bridge.  I should learn that any walk mentioning a bridge where folk bungee jump is not for me! Why anyone would jump off this bridge for pleasure is beyond me! 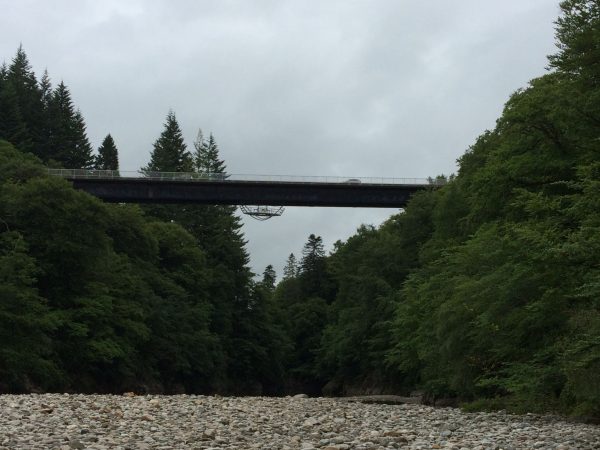 I can get pleasure enough watching the birds skim the water for insects and just being able to stand and enjoy the beauty and peace of the place, which, of course, hundreds of years ago was the route men were walking before going into battle.  It is thought provoking; I find such places highly evocative, where we seem to cross past lives, and they make me really appreciate life. 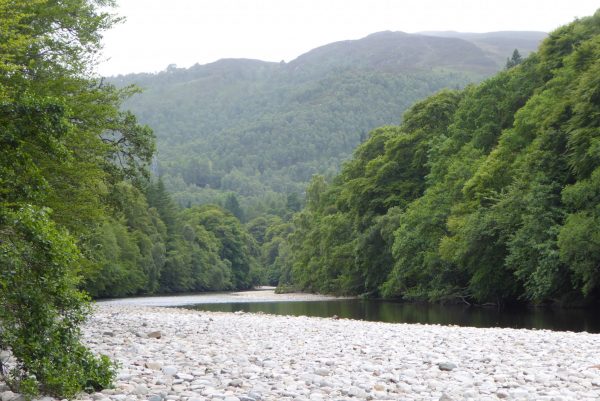 Resuming our walk we continue along through the woodland besides the river following signs for Pitlochry.  On the opposite bank of the river is the Clunie Power Station.  The river has now become the River Tummel. 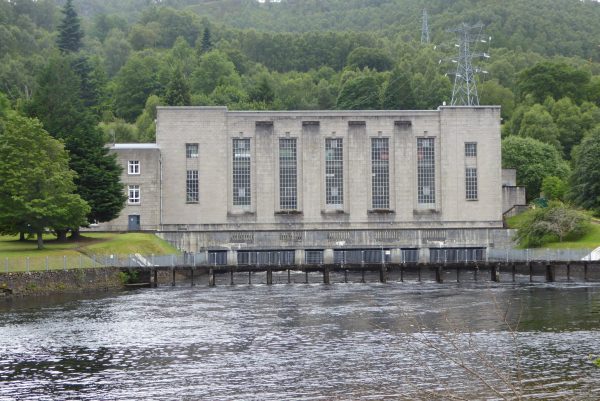 The path continues past Faskally House, built in 1831 it was a private residence until 1953 when it was acquired by the Forestry Commission and used as a forestry training centre.  Then in 1997 the house was purchased by a Christian Fellowship group for use as a study centre. 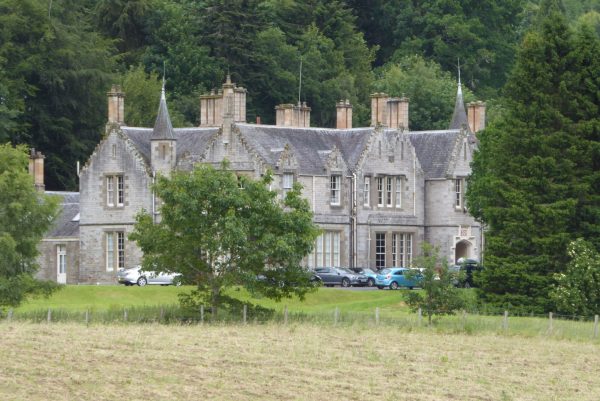 The path now joins a minor road by the fishing research centre. We turn right along the road and follow it around the edge of Loch Faskally and then start to head uphill.   We turn right into the small car park besides Loch Dunmore, this is another tranquil spot. 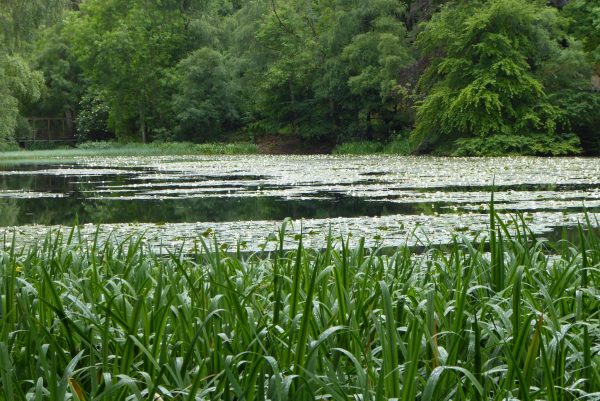 We then go through a metal gate and head into Faskally Wood and walk around Dunmore Hill with Loch Faskally to our right.  We soon reach a viewpoint for the Clunie Road Bridge and footbridge. 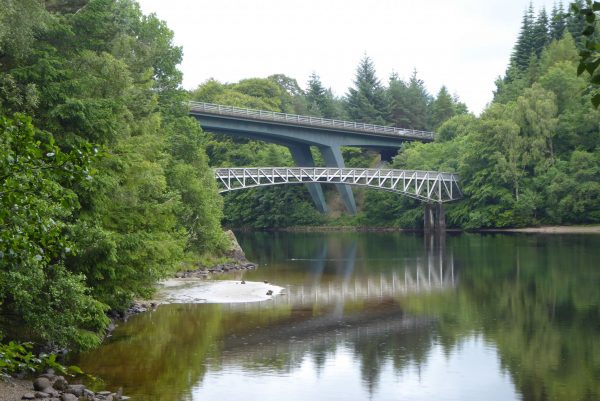 The viewpoint is on the site of the Old Bridge of Clunie, it crossed the River Tummel here and was built in 1832.  The bridge was demolished in May 1950 when the Pitlochry Dam was constructed to form the Loch.  Stones from the bridge were used to construct the viewpoint.

The Aldour Road Bridge further down river was constructed as a road crossing in 1949 and the Clunie Footbridge added in 1950.  The footbridge was the first in the Country to be built wholly of aluminium-alloy.  Now the more modern A9 bridge passes high above the river and the path takes us underneath it. 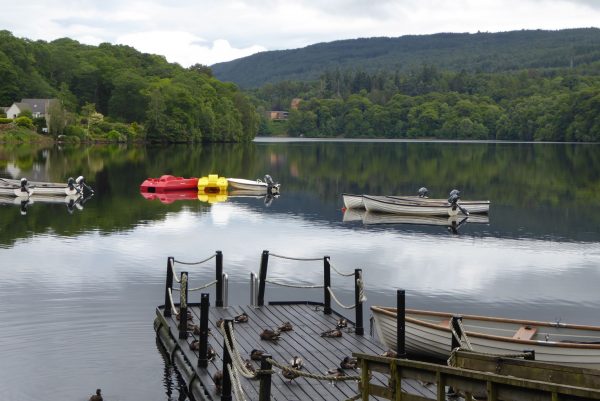 We then reach an area where boats are hired and turn right onto the minor road and follow this past a smart hotel to reach the A924.  From there we follow the road back into Pitlochry.  We have covered nine and a half miles and it has been a stunning walk. 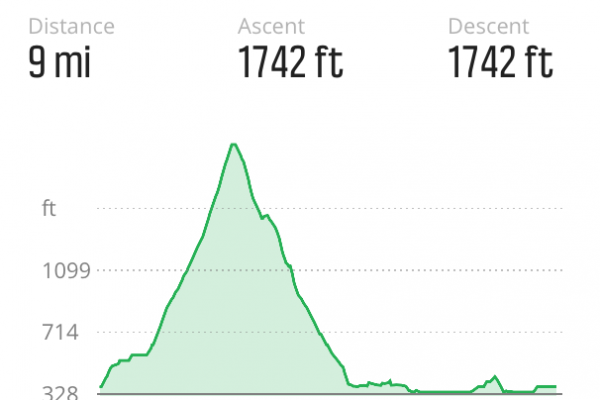