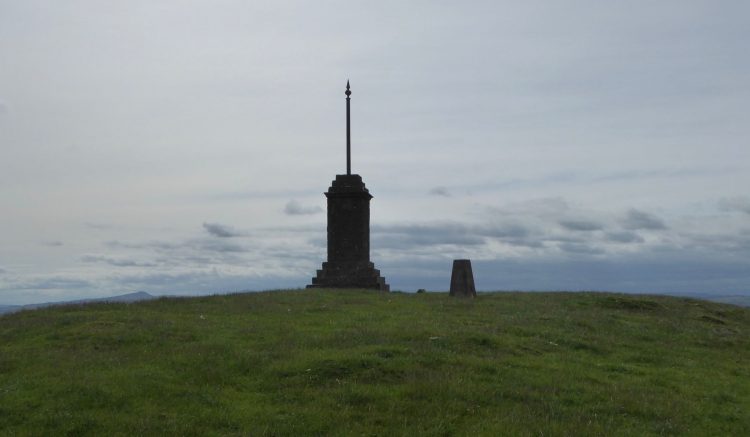 The weather is brighter today and after yesterday’s short walk we are keen to get a few more miles under our belt.  We are also keen to explore more of the area; there are no shortage of places around here where significant historical events took place.  Our starting point is the attractive village of Ceres.

There is free parking in the centre of the village alongside the Fife Folk Museum.  We resist the temptation to wander around the village, saving that for after our walk. 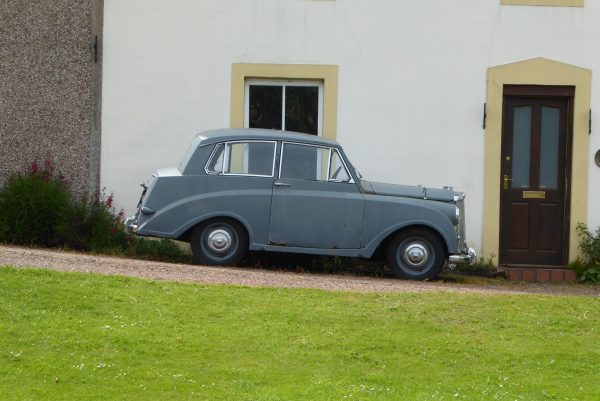 We leave the car park via the entrance road and head up Woodburn Road, which has a footpath sign to Struthers.  Very soon the road becomes a walled track. 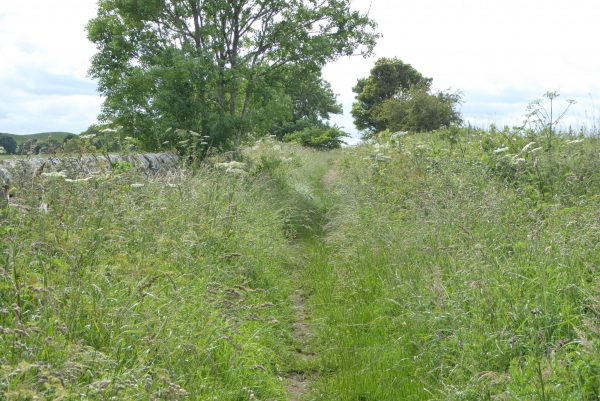 We pass some cottages and turn right on reaching Denhead Farm, the path now continues down the farm driveway, crossing a cattle grid to reach the B939.  We cross and join the path opposite.  This gets a bit boggy as we head downhill turning left as we meet a track and pass an old Doocot (or Dovecote to those south of the border).  Meeting another road we turn right to cross the cobbled speed hump and head down past the old mill to reach a ford over the Craigrothie Burn.  Fortunately there is also a stone bridge so we avoid getting our feet wet. 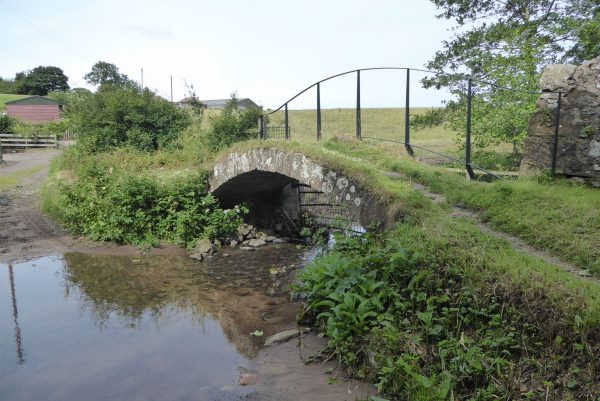 The lane now passes uphill passing an old barn on the right and then reaches a minor road.  We turn right and walk a short distance besides the road before turning into the entrance of the Hill of Tarvit mansion house and grounds.

There is a golf course on our left that is totally deserted.  This is an interesting course; it is Kingarrock hickory club course built in the early 1900’s by Frederick Sharp then owner of the estate.  He died in 1932 and with the advent of World War II the course was commandeered for farming.  It was not until the 1990’s when an old map of the course was discovered that it was returned to its former glory, re-opening in 2008.  All this is interesting, but the really intriguing thing is that to play the nine-hole course you hire hickory shafted clubs and old rubber balls.

It is an interesting concept but to play nine holes, including the hire of the equipment, costs £45 or £75 for eighteen holes, no wonder it is empty! 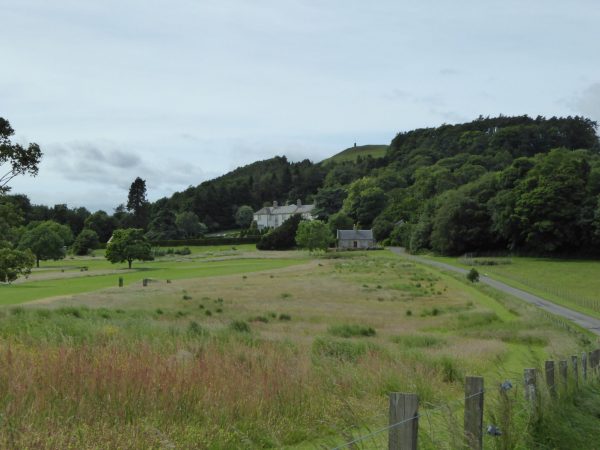 We walk up the road and pass to the left of a cottage and follow the line of a high hedge to reach the entrance to the Hill of Tarvit House. 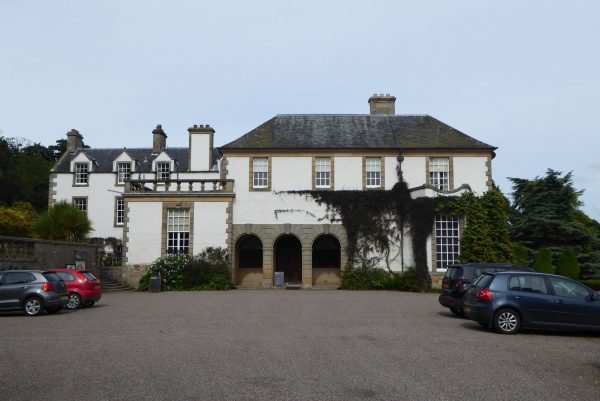 John Wemyss built the original mansion house in 1696; he obviously called it “Wemyss House”.  The current Hill of Tarvit house resulted from work done after Frederick Sharp purchased the house in 1904.  Sharp was a member of a wealthy Dundee family who were mill owners and were big in the jute industry. Apparently Sharp managed to sell cloth for sandbags to both sides during the American Civil War.

He originally purchased the house to be near to St. Andrews for the golf and then built his own nine-hole course in the grounds.  The architect Sir Robert Lorimer was engaged to redesign the house to create the current mansion.

On his death in 1932 the house passed to his only son Hugh Sharp (born 1897) he had survived action in World War I, but then when travelling to meet his fiancé in 1937, was tragically killed in the Castlecary rail accident.  An express train between Edinburgh and Glasgow hit the rear of a late running local service killing 37 people.

On his death his mother Beatrice, and then his sister Elizabeth ran the estate.  But when Elizabeth died in 1948 the house was gifted, along with a large endowment for its upkeep, to the National Trust for Scotland.

Our route takes us through the garden behind the house and straight up to large wrought iron gates. 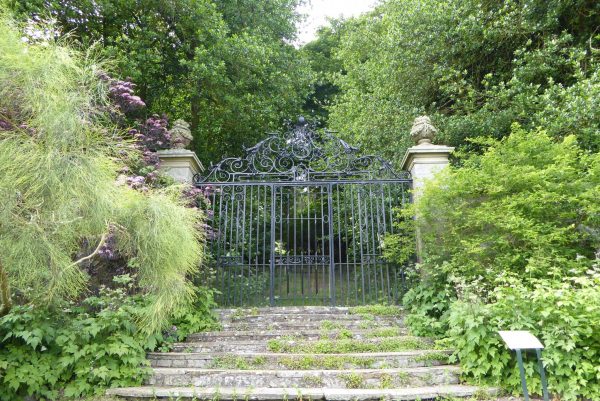 After passing through the gates the path leads uphill through woodland and then crosses a stile to continue uphill.  The route is not well defined but we make our way up the grassy hill to the trees on the top and then turn left to head for the summit.

At the top alongside the trig point is a monument.  Originally the Cupar Market Cross stood here.  It is thought it was moved to this location in the early 1800’s to mark the spot of the signing of the Treaty of Garlie Bank on 13th June 1559. This treaty resulted in Queen Mary the 1I’st’s army agreeing not to attack Cupar.  The market cross was returned to the town in the late 1800’s and the present monument erected to mark Queen Victoria’s Diamond Jubilee in 1897. 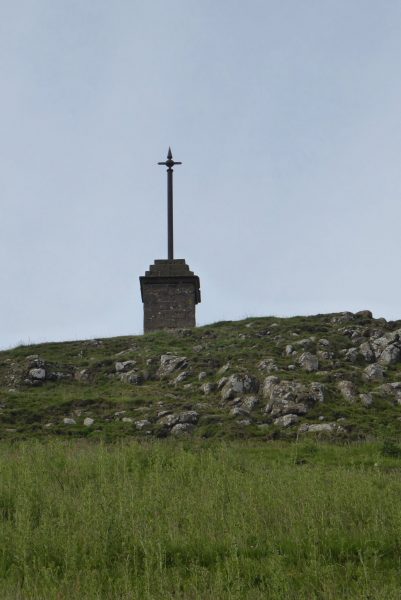 We head back down the hill towards Tarvit House, but leave the field by a stile further to the right than the earlier one we crossed, going back into the woods.  The path leads to the car park for the house and golf course.  Here we take the driveway towards the west, but turn off to the left to go through a gate picking up a path alongside the golf course that leads into woodland.  In the trees is an old doocot, built like a tower.  The surrounding area is rather overgrown so it is not very accessible. 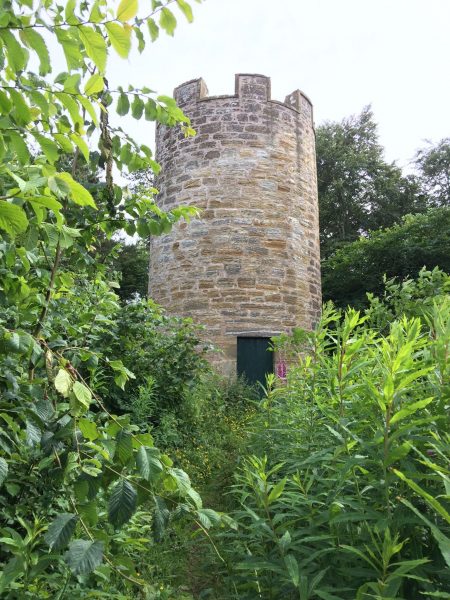 Retracing our route to the driveway we walk towards the A916.  After crossing the road we continue along a farm track towards Scotstarvit Tower.   An information board explains that the Inglis family may have built this tower when they acquired the estate in 1487.  It was rebuilt by Sir John Scott in the 1620’s and has six storeys.  The first and third floors were covered with stone vaults to provide strength and resistance to fire.  Interestingly in the 1600’s they were building tower blocks with fire safety in mind, it is a pity that such concerns do not appear to apply to modern day tower blocks providing social housing. 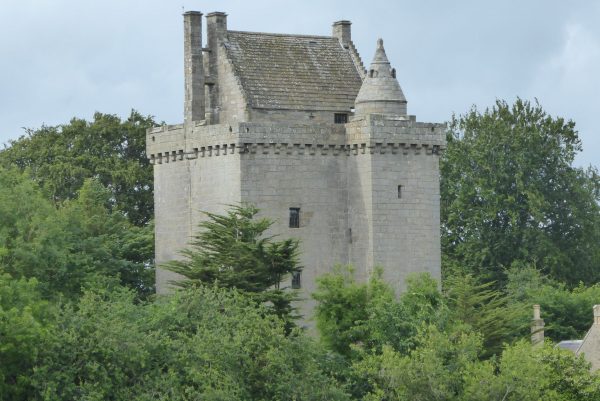 The tower is open but the narrow staircase makes it difficult to negotiate with the dogs, sensibly Lynnie decides not to go up on her own.  It has a slightly eerie feel to it.  I would not want to be in here after dark!

We carry on along the farm track passing Scotstarvit Farm and follow the track as it turns to the left and southwards to reach Chance Inn.   We turn left at a road junction and follow this road until it meets the A916.  Here we turn left to walk on the pavement into Craigrothie, continuing through the village we turn right just before reaching the bridge over Craigrothie Burn.

This lane leads us down to where we were earlier and we follow the same route across the burn and up the farm track to the minor road.  Here we turn right, this time passing the entrance to the Hill of Travit estate and follow the Wemysshall Road back into Ceres.

At a junction in the village we turn right towards the car park.  On the way we pass the impressive parish church. 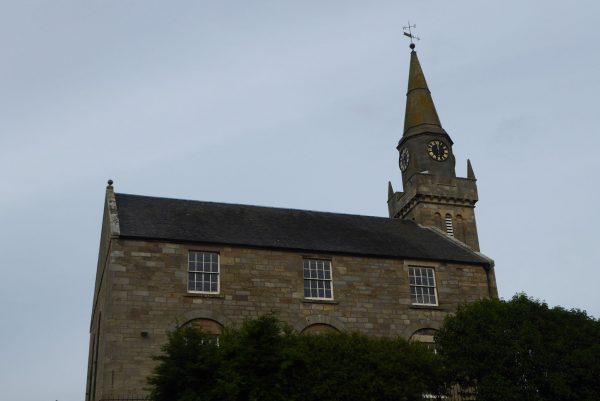 Slightly further on, after crossing the road, there is the 18th century statue carved like a toby jug, under which is the inscription “Provost”.  It is thought to depict the Rev. Thomas Buchanan, the last church provost of Ceres in 1578.  Below the statue is a carving said to portray the Battle of Bannockburn. 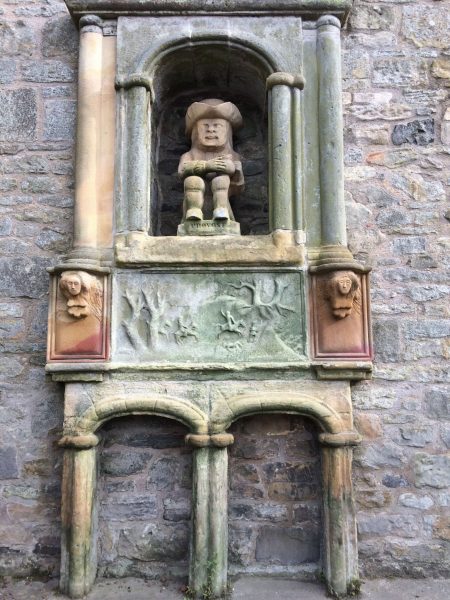 We continue along the lane past the old weigh house.  As the name suggests this was where grain was weighed on market days.  It is now part of the Fife Folk Museum. 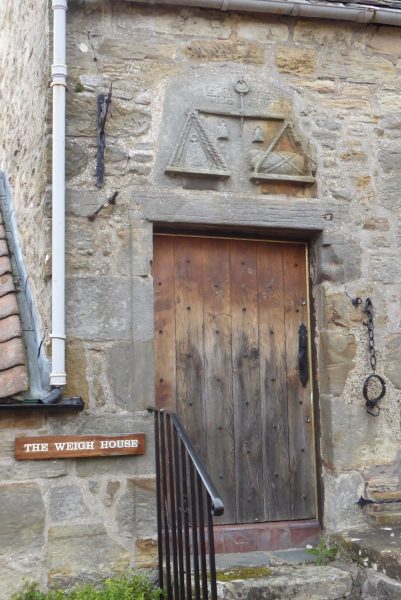 The lane takes us past the museum with its outside array of old rural equipment.  We then cross the 17th century packhorse bridge “Bishop Bridge” over Ceres Burn. 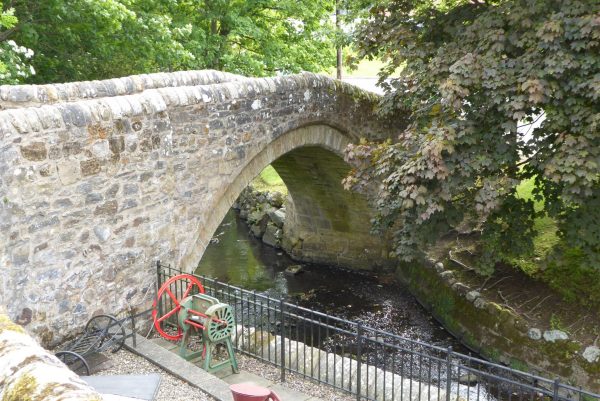 Back at the car park, I cross the road to look at the 1914 monument commemorating the village men who fought in the 1314 Battle of Bannockburn.  Behind the monument is the village green known as Bow Butts, reportedly used for archery practice in medieval times. 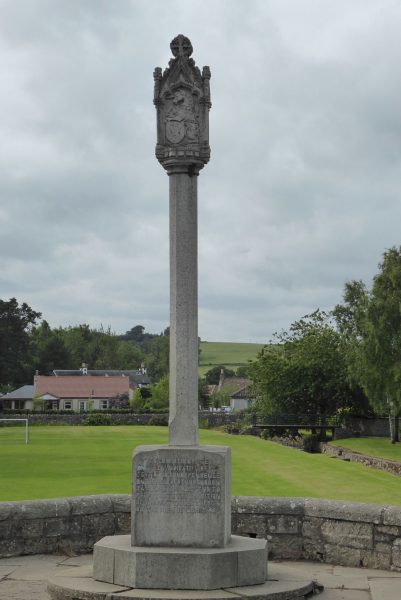 This walk has highlighted the great number of historic sites around here.  We have wandered close to seven miles and it has taken quite a while because there was so much to see!  Regrettably we have reached the end of our stay at Knockhill CL, we will miss the views and the Tavern. 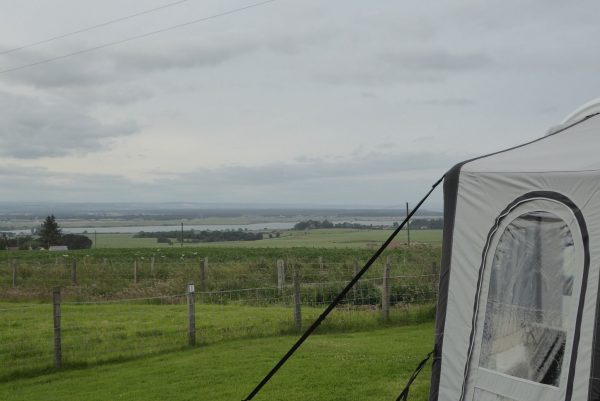 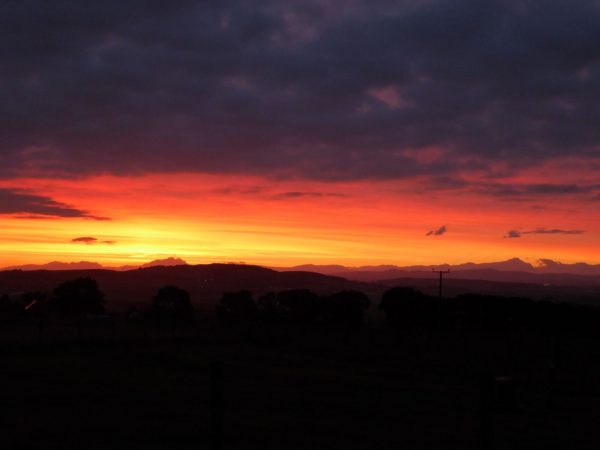 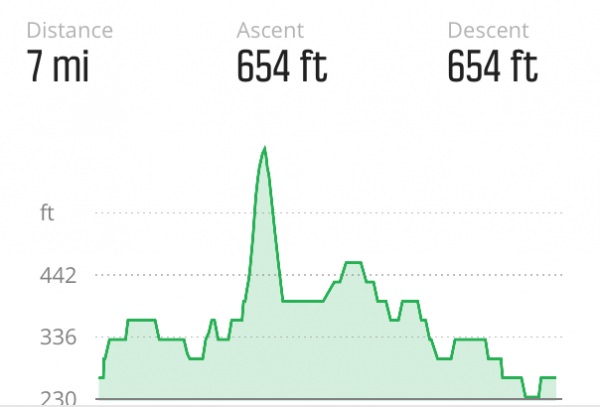